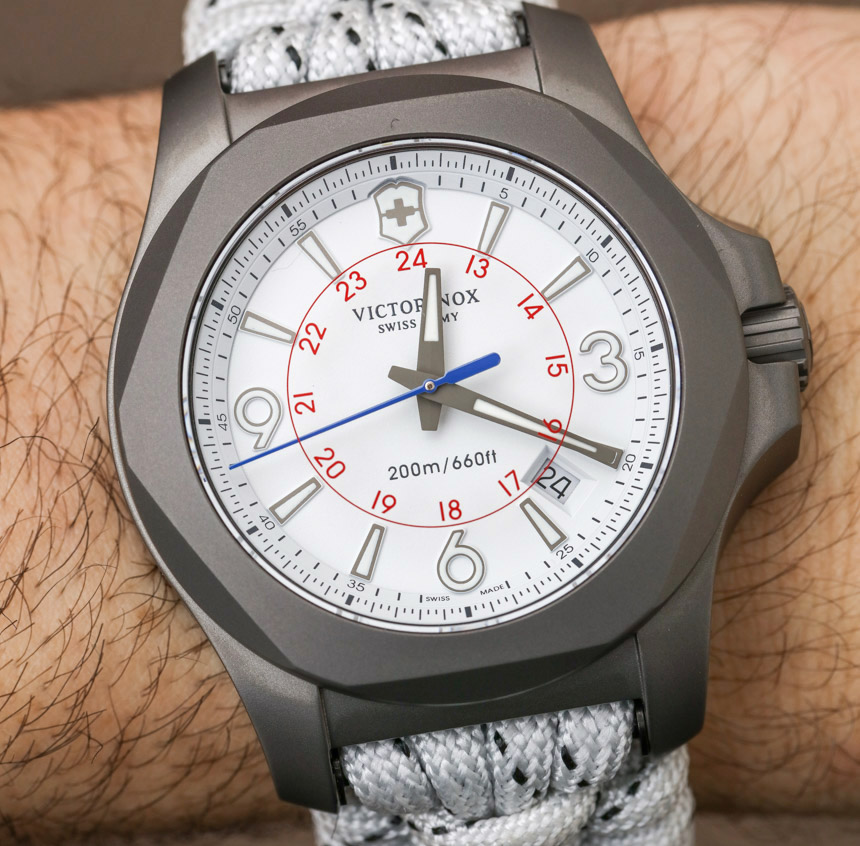 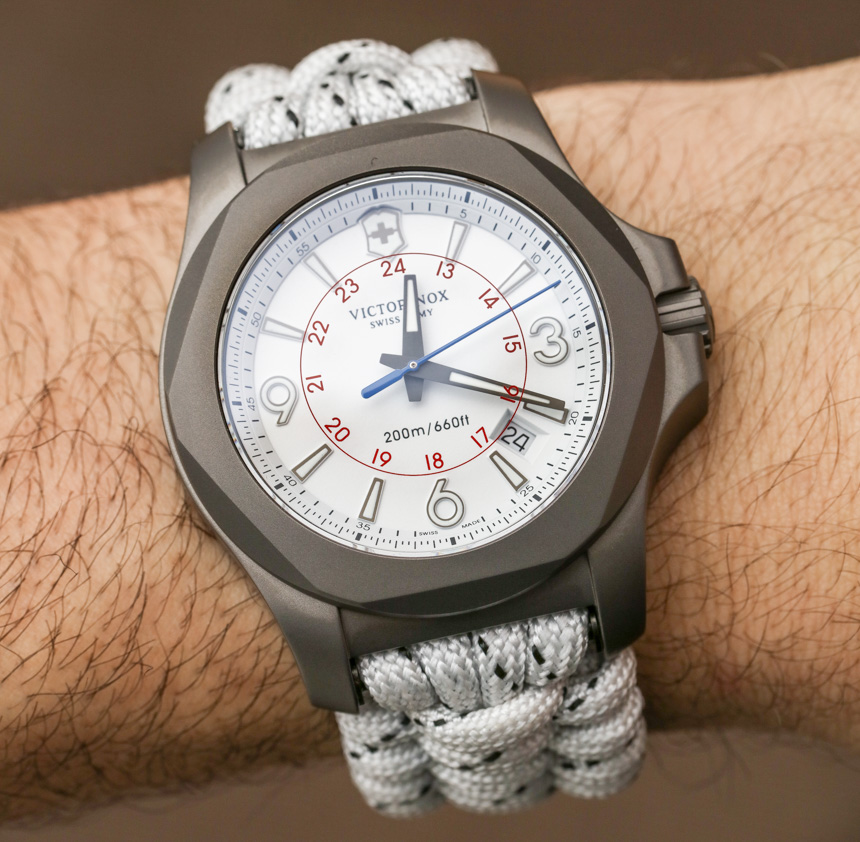 At Baselworld 2017, Victorinox Swiss Army focused almost entirely on refining their existing collections and adding supplementary models – such as this rather nice Victorinox Swiss Army INOX Titanium Sky High limited edition. I don’t even recall seeing a single new mechanical piece from the brand this year. This experience falls in line with what most of the watch industry is doing, which is hunkering down and trying to understand where the luxury timepiece market is going. Victorinox Swiss Army is a bit unlike other brands in that they rely on a lot of direct-to-consumer retail sales through their own stores and website. Thus, a lot of their product decisions are based on what sells or doesn’t sell in their own brand environment. What has worked very well for them is the INOX collection – that aBlogtoWatch has reviewed extensively. 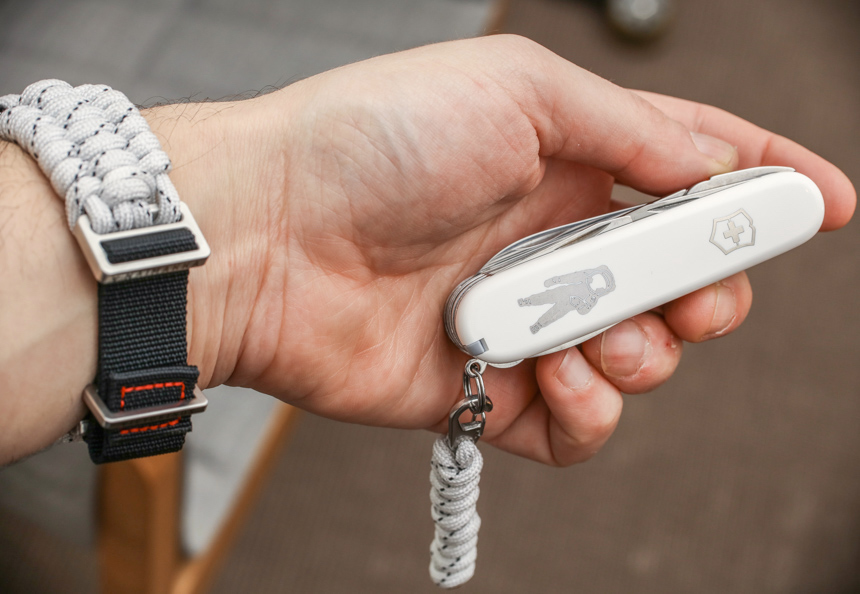 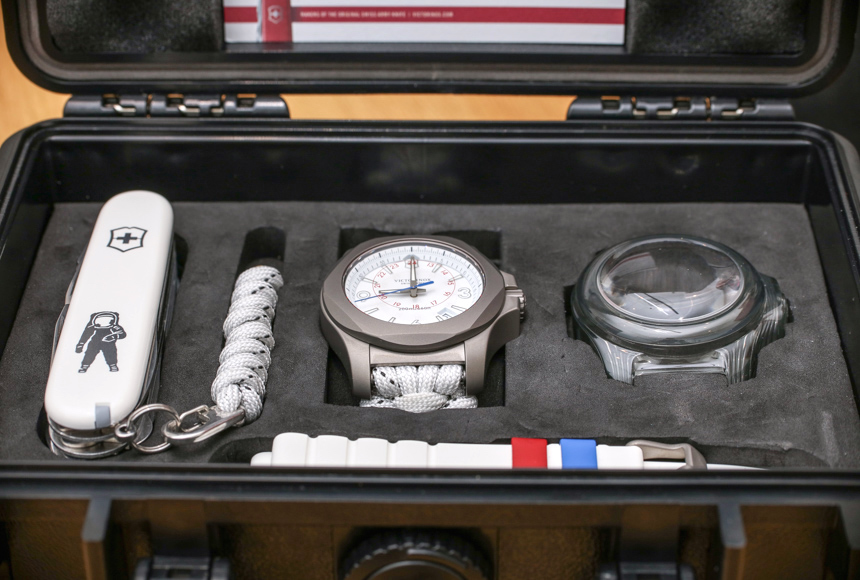 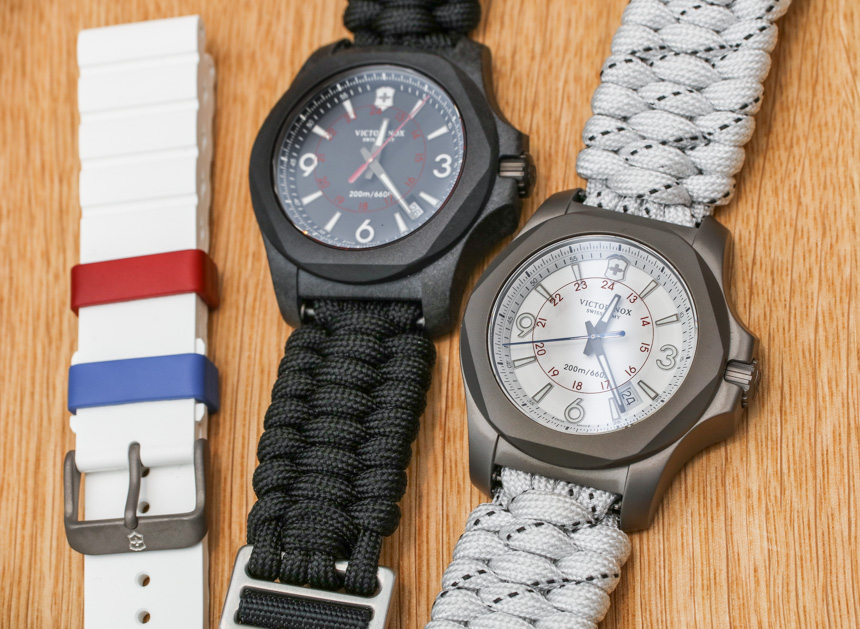 The 2017 Victorinox Swiss Army INOX Titanium Sky High Limited Edition is a direct celebration of the fact that Swiss Army knives are an official part of the kit that many astronauts take with them to space. For legal reasons, Victorinox Swiss Army isn’t able to be particularly loud about this, but this year they are trying to remind people of it. Note the astronaut icon on the small Swiss Army knife that comes with this set. The INOX Titanium Sky High is supposed to be visually inspired by the mostly white environs of an astronaut’s in-space experience, and the resulting look is pretty cool. 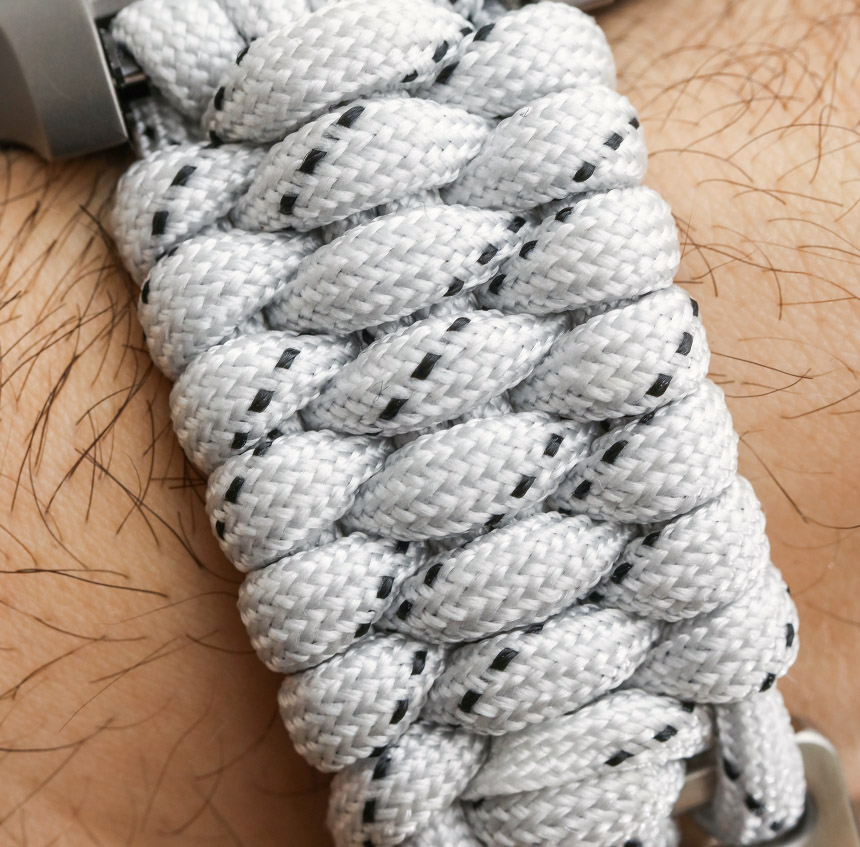 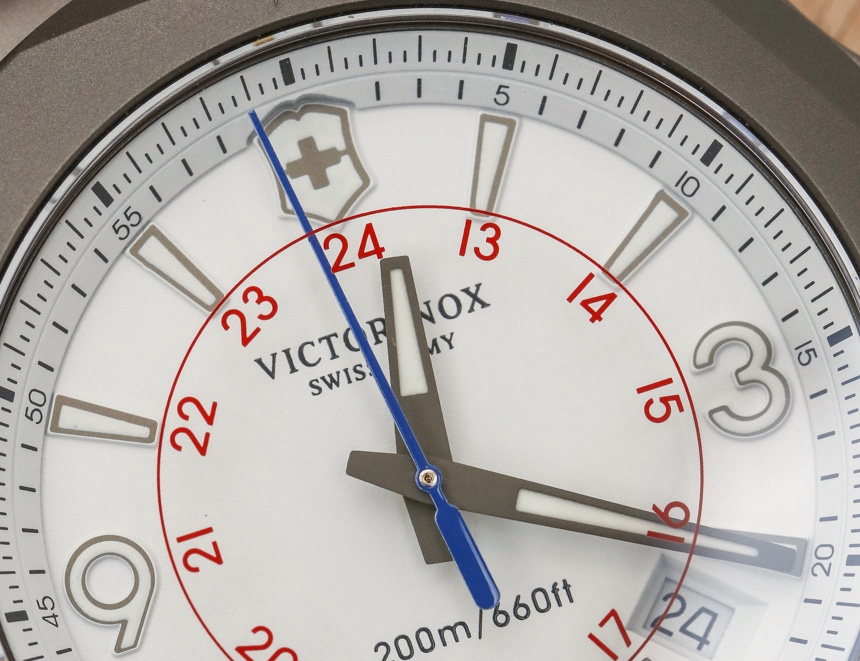 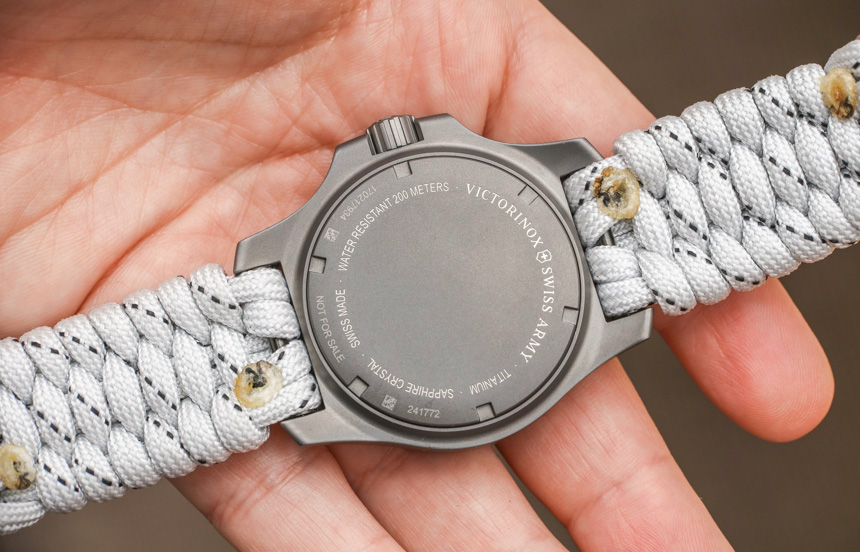 The INOX Titanium Sky High is less about new parts and more about attractive curation of existing components – perhaps rendered in new colors. The INOX Sky High is mostly based on an INOX watch model that was released late in 2016, which was the Victorinox Swiss Army INOX Carbon. The watches share a dial style and Naimakka paracord strap. Though the Carbon has these in black, while the Sky High has them in white. The major material difference between the two watches is that the INOX Carbon has a forged carbon case, while the INOX Sky High has a sandblasted titanium case. Even though the Carbon is not a limited edition, on the Naimakka paracord strap it is actually $100 less expensive than the INOX Sky High, which I believe is a direct result of carbon case cost to Victorinox Swiss Army. 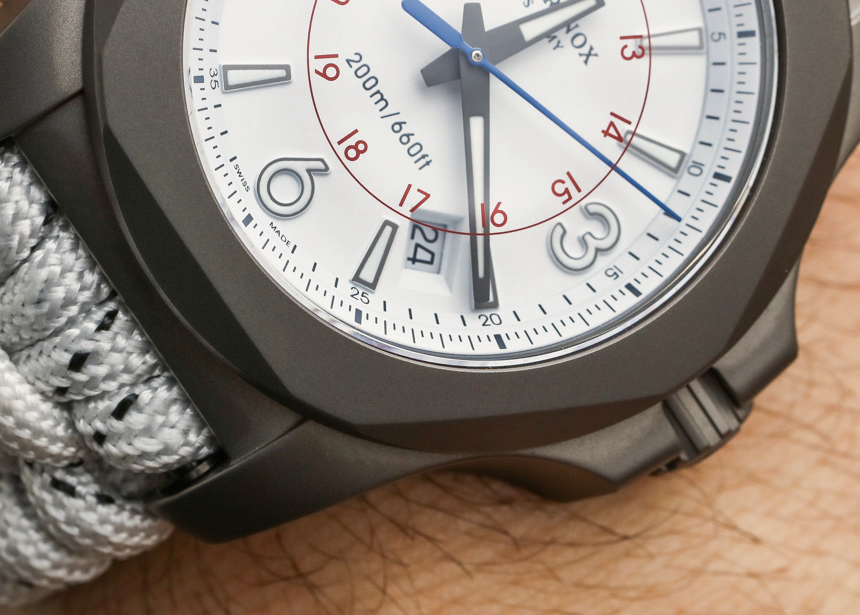 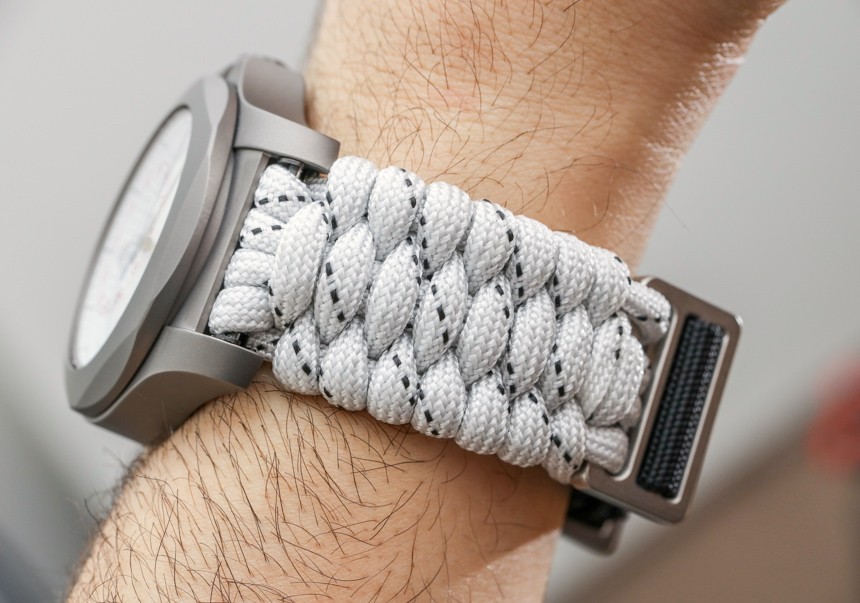 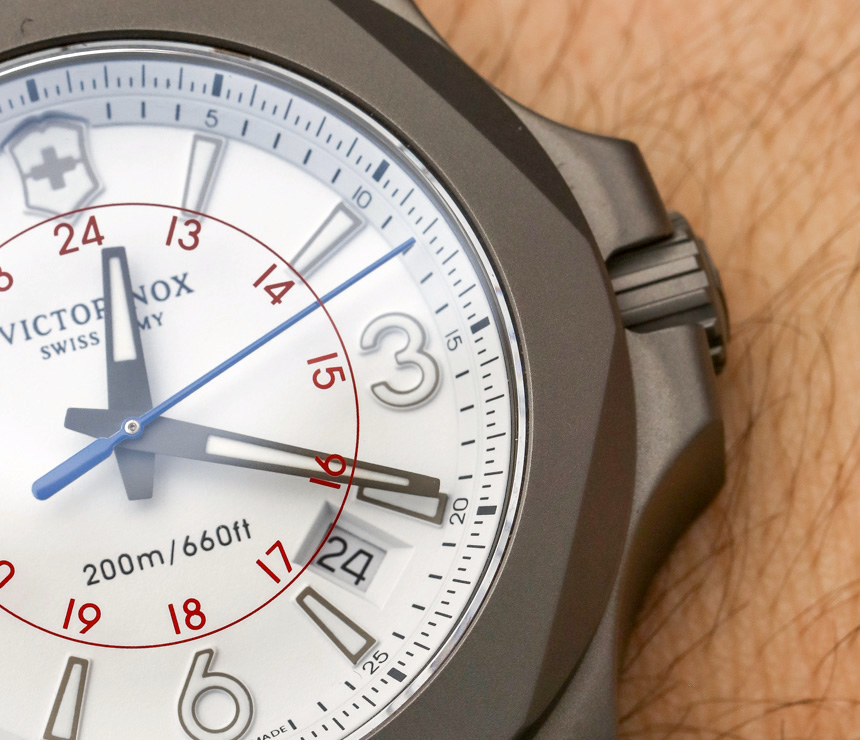 The INOX Sky High offers the military style dial of the Carbon in white, alone with a speckled white paracord strap (that contains para-aramid fiber – apparently eight times stronger than steel). In the box you also get a white rubber strap (with blue and red strap rings which are sorta cool), along with a limited edition small Swiss Army knife that has a paracord attachment to it. My only gripe about the set is one that can’t really be helped according to Victorinox. Basically it relates to the fact that the underside of the paracord strap is black fabric while the rest is white. It isn’t terrible, but it would have been better in a matching white color. 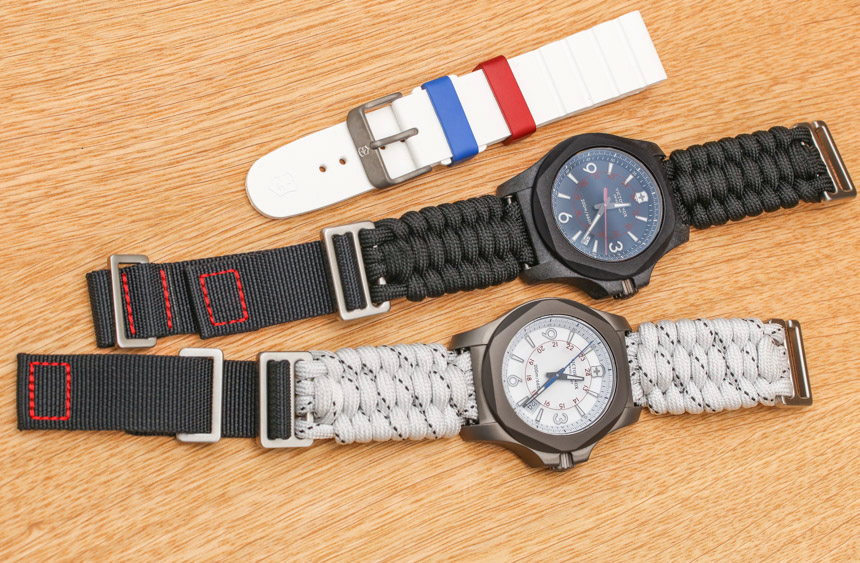 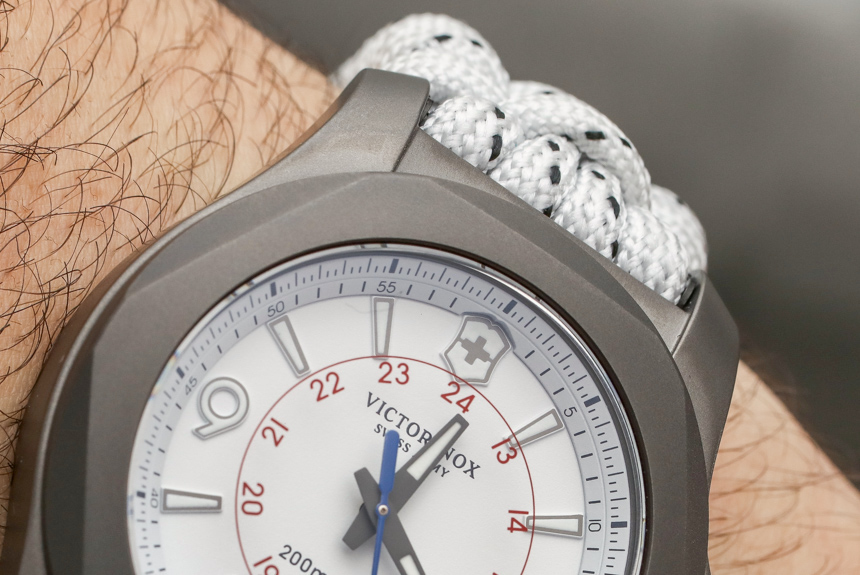 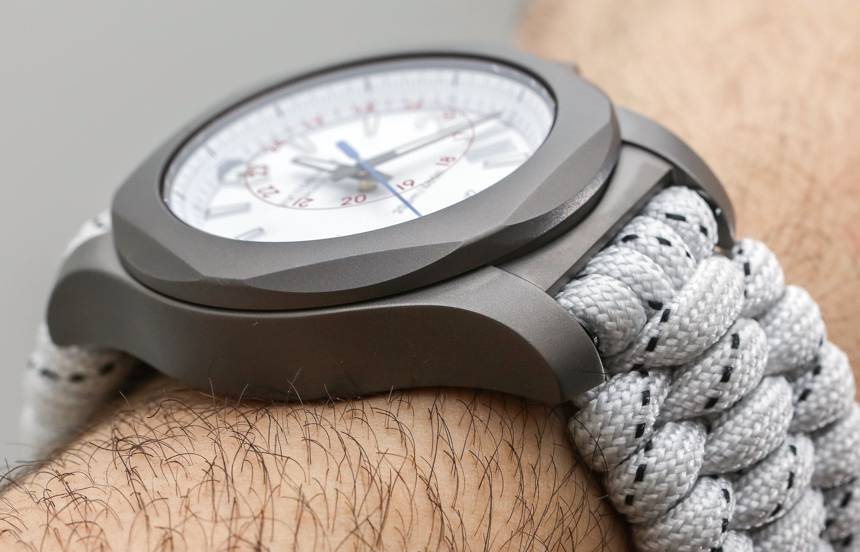 The reason for the black fabric versus matching white – according to VSA – is that there are rigid military spec regulations. I forget the specifications that the strap passes, but apparently making it white versus black would no longer allow it to be used for some specific type of military use. Not sure how many of these watches will be used by the military or how it will affect sales overall, but I am guessing most of the people wearing the INOX Sky High will be “desk astronauts” as opposed to the real thing. With that said, I do applaud Victorinox for being so meticulous with the utilitarian element of their products. 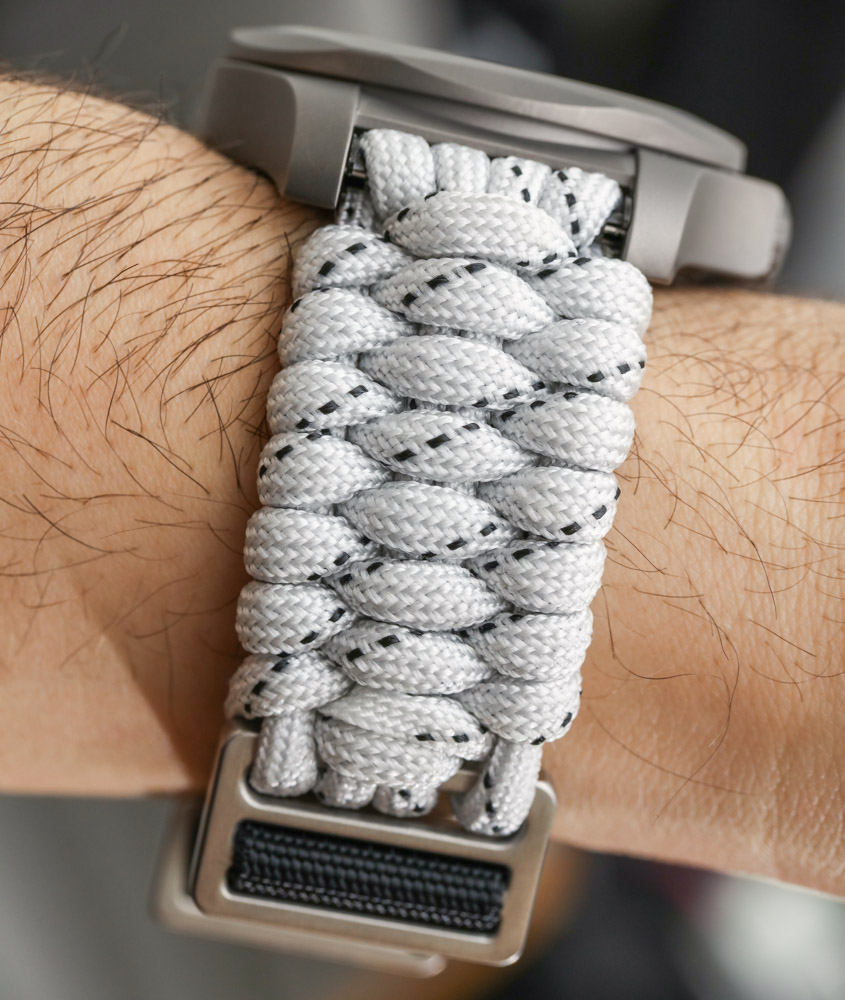 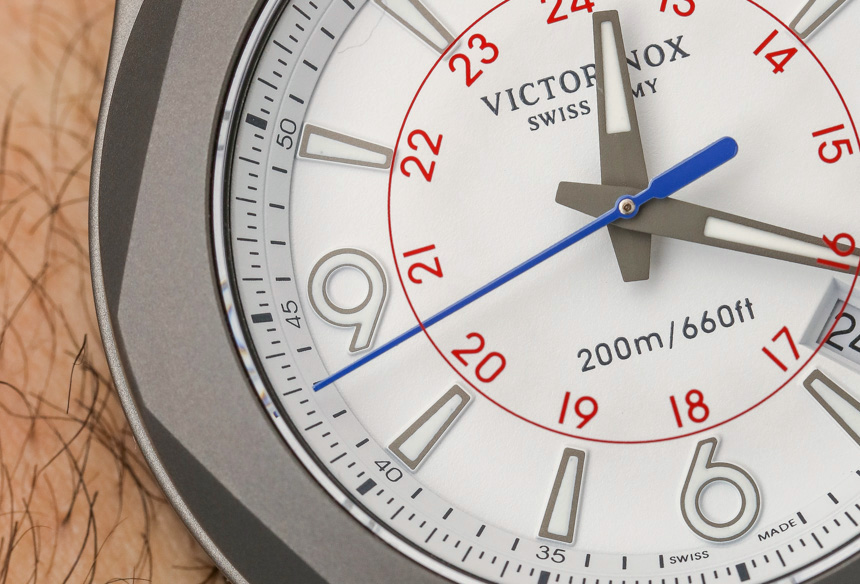 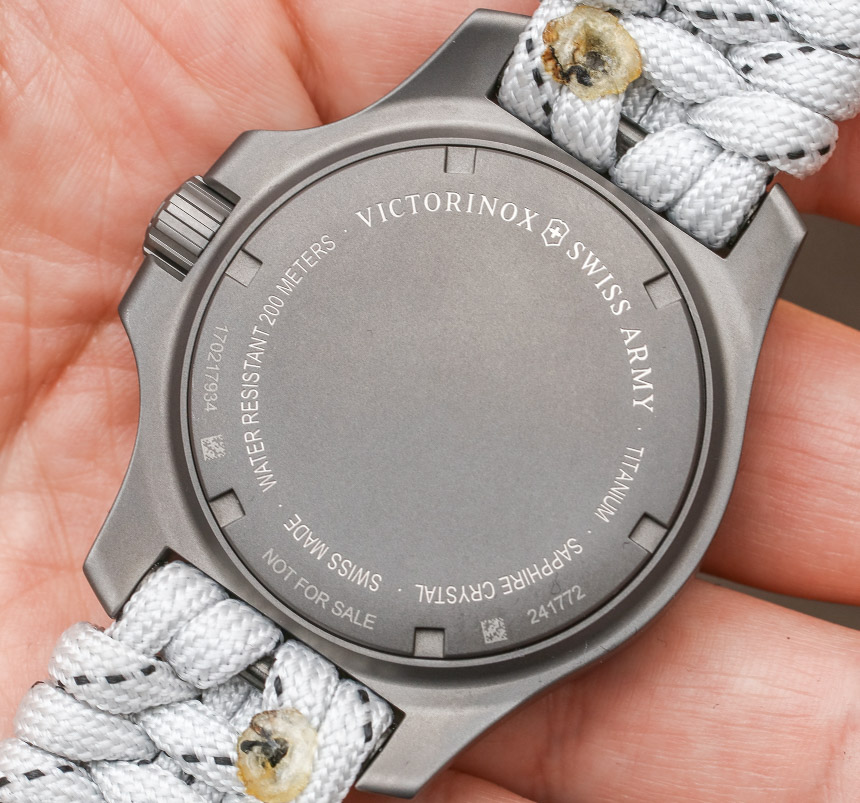 The INOX Sky High case is the same 43mm wide as most other INOX models (not including the new INOX V for women, or the slightly larger INOX Professional Diver). The sandblasted titanium case is water resistant to 200 meters and has an AR-coated sapphire crystal. The crystal has a red ring of 24 hour markers printed on it, which is a controversial design element, but cool in my opinion. Inside the watch is a Swiss Ronda caliber 715 quartz movement. 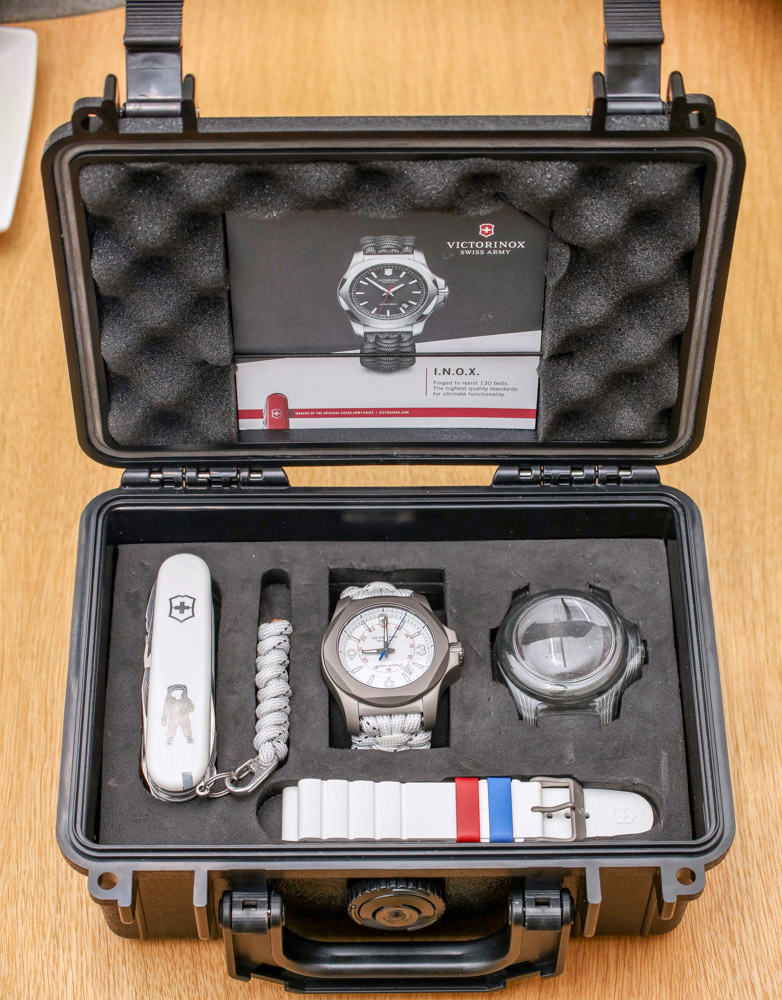 While I think Victorinox Swiss Army could have sold more than the limited edition amount of these white INOX watches, brands tend to get conservative when it comes to white-colored men’s watches. I do think if this is the sales success I anticipate it being, then VSA will make more white INOX timepieces down the line. The connection with aerospace and space flight is cool, but at the end of the day the Victorinox Swiss Army INOX Titanium Sky High will do well based on its attractive good looks, utility, and wearing comfort. The INOX Titanium Sky High will be a limited edition of 2,000 sets (including the straps, pelican-style case, and pocket knife) with a price of $850 available starting September 2017. victorinox.com