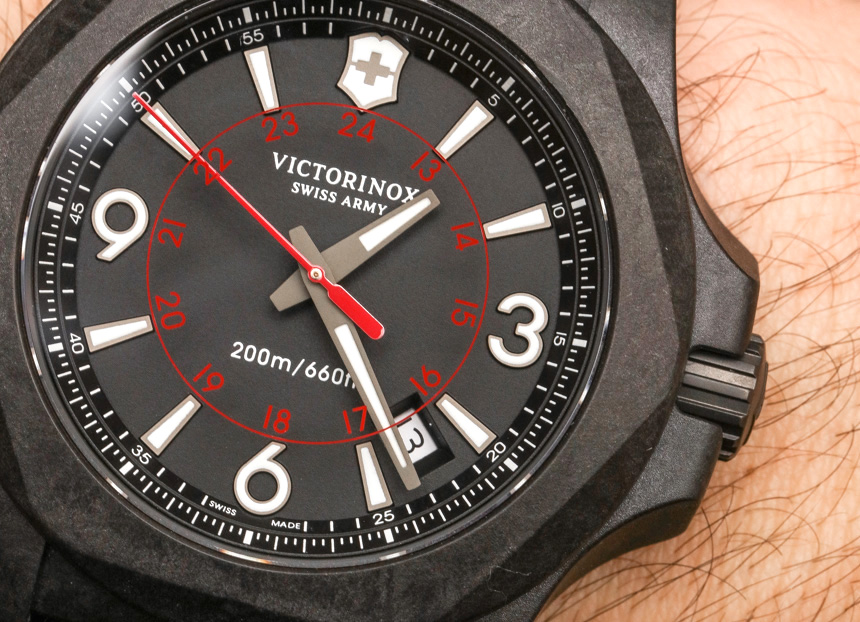 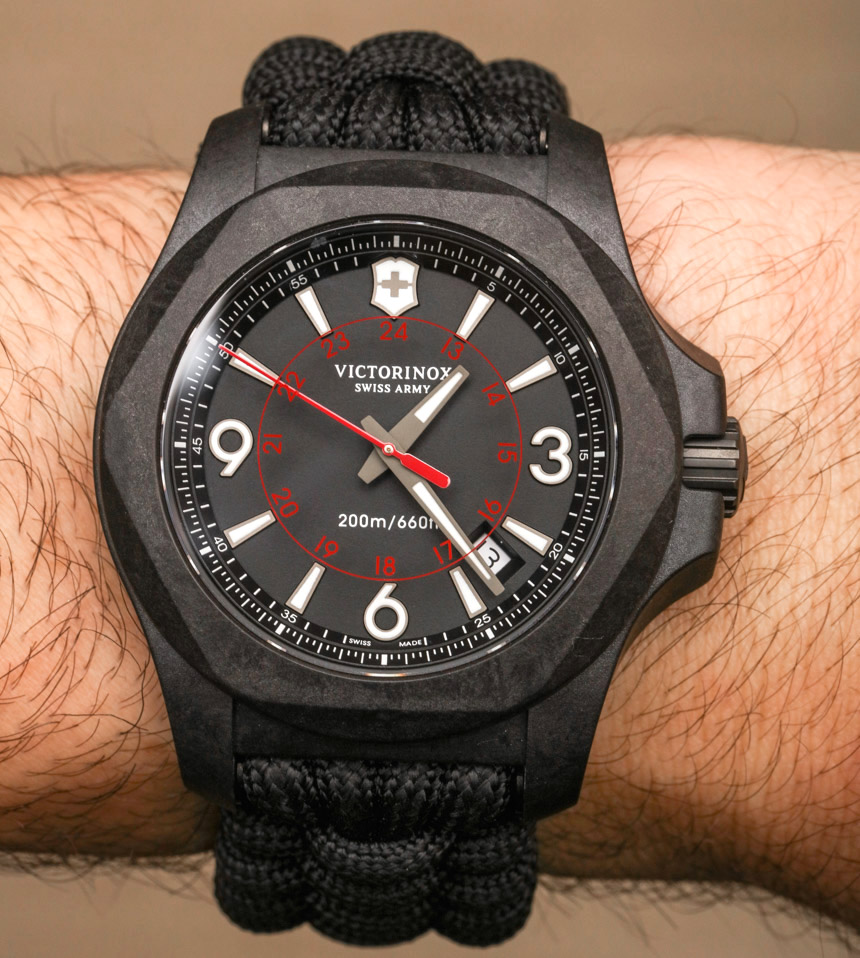 Reviewing the Victorinox Swiss Army INOX (I.N.O.X.) Carbon watch leaves me feeling torn. I like the product – I really do – but it makes me feel compelled to do things I probably shouldn’t. I’m a guy who likes adventure, but I’m also at the point in my life that I don’t know if I am willing to put up with the risks that a timepiece like this is meant to survive in. With that in mind, let’s take a look at Victorinox Swiss Army’s latest version of their INOX watch with its trendy black carbon case and updated, more aggressive dial.

The Victorinox Swiss Army INOX Carbon is new for 2017 and is the fourth major variation on the original Victorinox Swiss Army INOX in steel that the brand released in 2014 (reviewed here). If you aren’t familiar with the INOX watch family, its purpose is pretty simple – to be a highly durable Swiss quartz sports watch with a look that is refined enough to be handsome and sophisticated. Victorinox Swiss Army developed a harsh battery of over 100 durability tests that the INOX watch would need to withstand. They made a marketing gimmick out of it, but it’s based on the reality that these watches are in fact designed to be durable (shock, pressure, vibration, scratches, etc.), and put up with the elements (heat, cold, water, dust, UV rays, etc.). 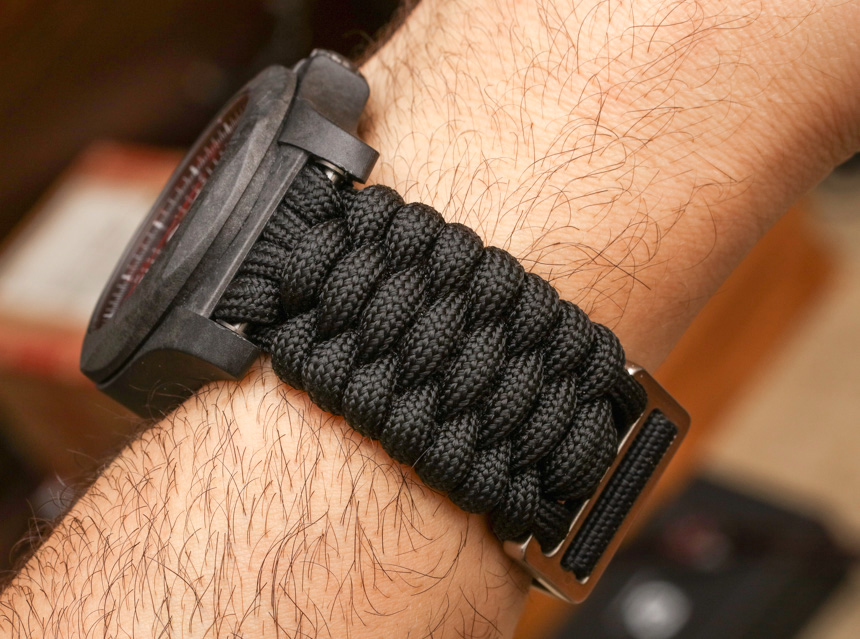 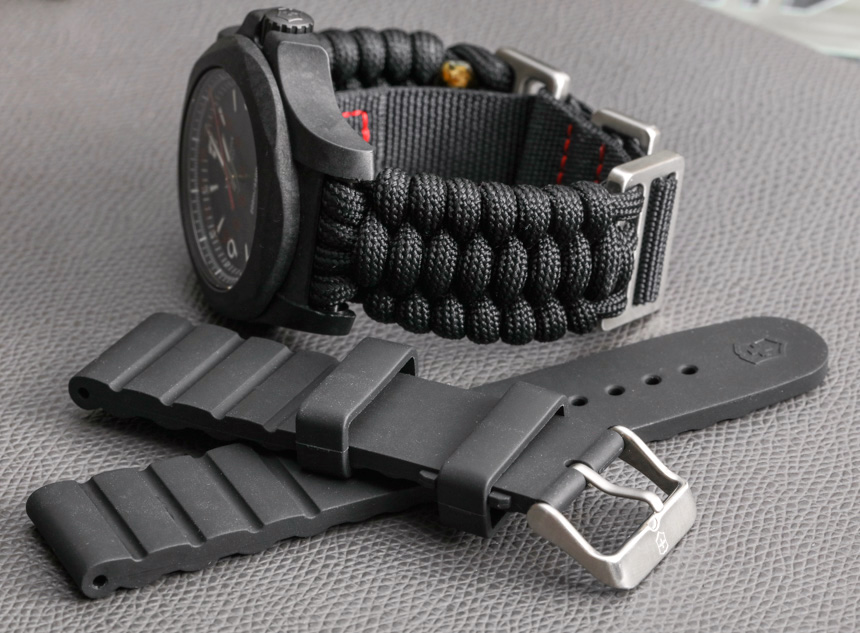 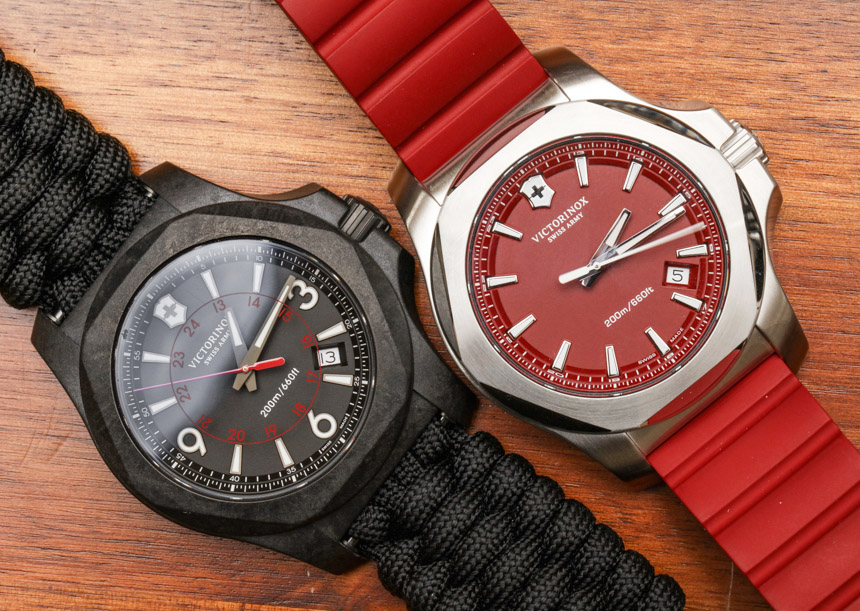 The original Victorinox Swiss Army INOX came in steel and followed up with the INOX Professional Diver, the INOX Titanium, and now the INOX Carbon. As I’ve said in the past, because inox means stainless steel in French (inoxydable), that there are INOX watches not in steel is a bit weird to a word-meaning-obsessed person like me. Though I am able to forgive it as I do genuinely think the collection is good enough to merit more than just cosmetic dial changes. Recall that in 2015, we also gave away some special Victorinox Swiss Army INOX watches in red with the aBlogtoWatch logo on the back – as a reward to this website’s top commenters in celebration of getting 100,000 comments. As of writing, we are close to 200,000 comments. 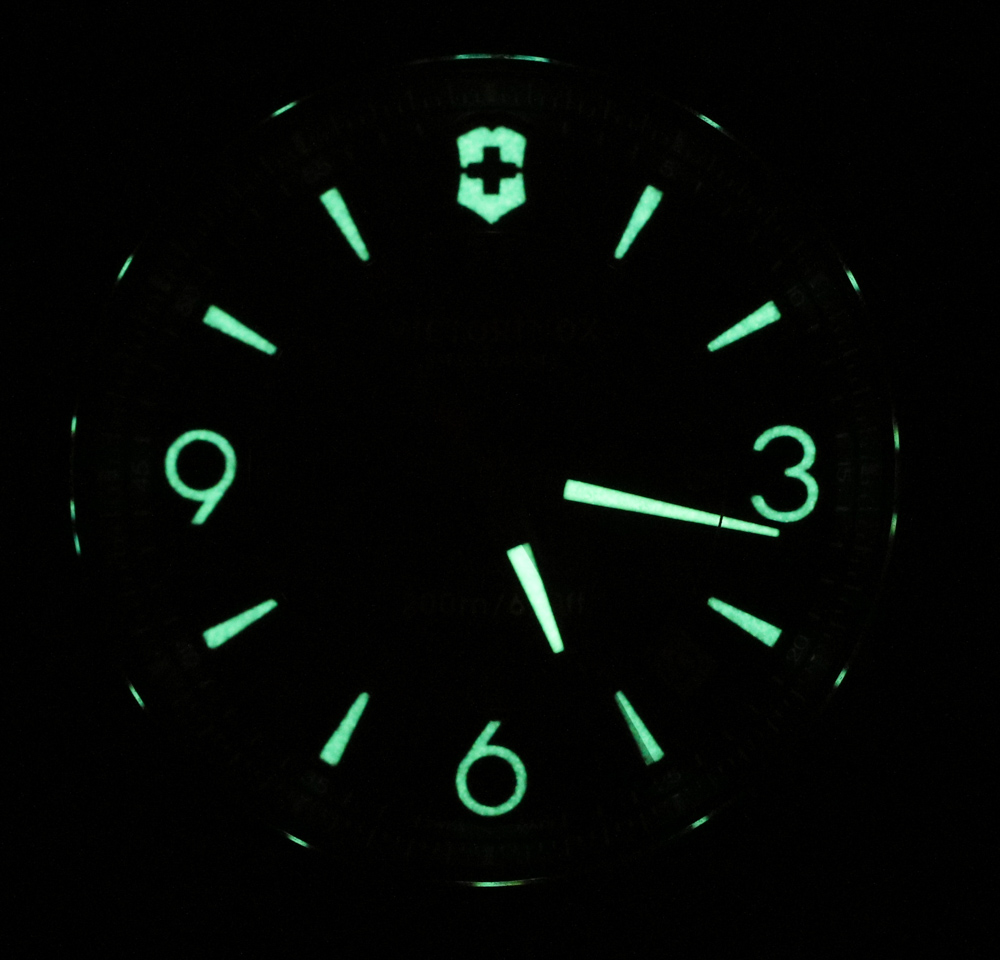 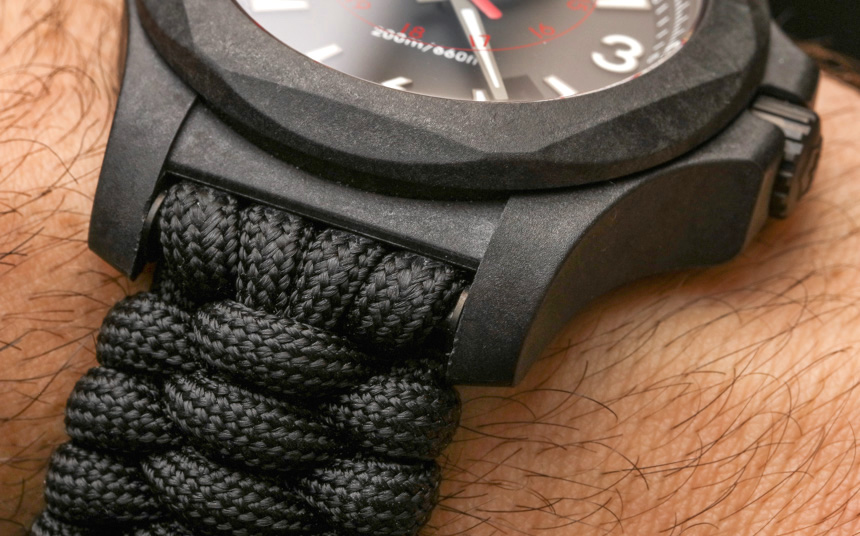 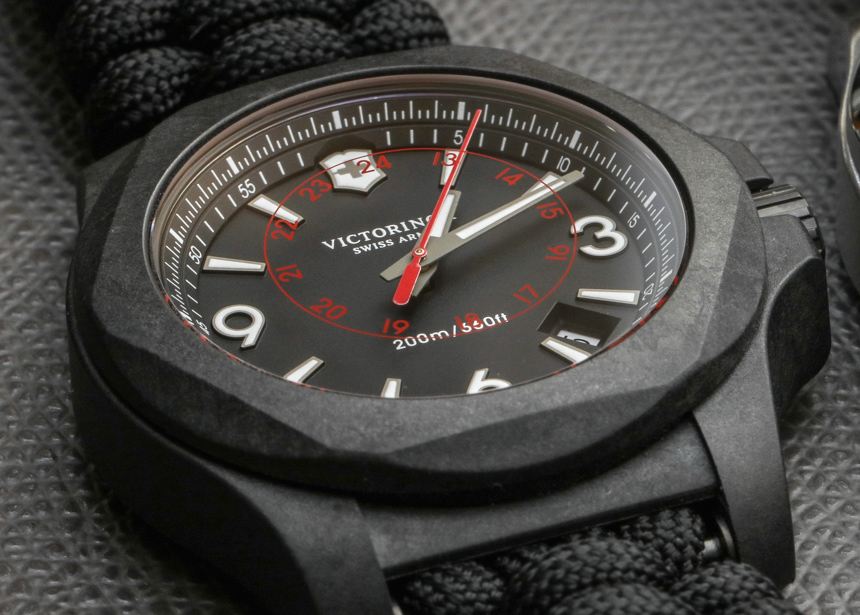 The Victorinox Swiss Army INOX Carbon presents the first black-colored INOX case and use of the lightweight material for the brand. I am pretty sure the development of the Victorinox Swiss Army INOX Carbon began with the brand wanting to have a black-colored version of the watch. Rather than simply do a coated metal case, they decided to get trendy like other brands (especially high-end ones) and use a high-tech carbon material.

Carbon composites are an “it” material in the luxury watch industry these days, and not all of them are created equally. Similar to carbon fiber, carbon composite begins with small pieces of carbon material which are formed into blocks, heated, and then machined like metal parts. The result is a relatively scratch-resistant material that is very dense and thus quite tough, as well as lighter than both titanium and, of course, steel. 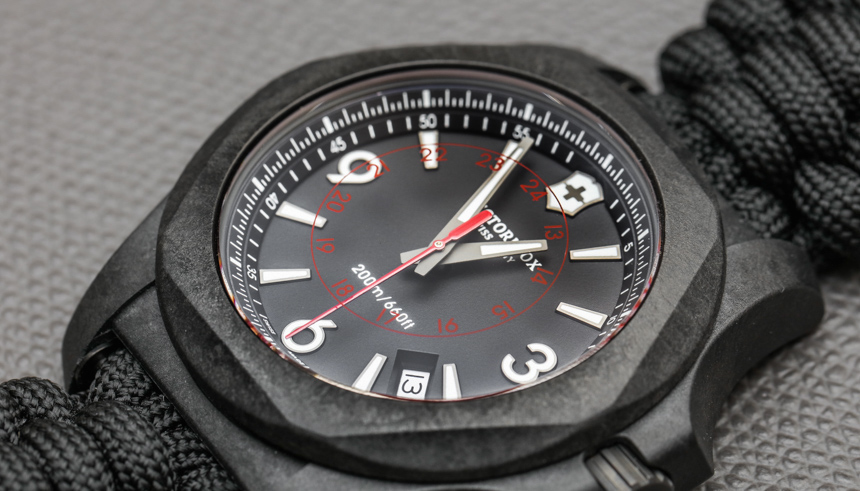 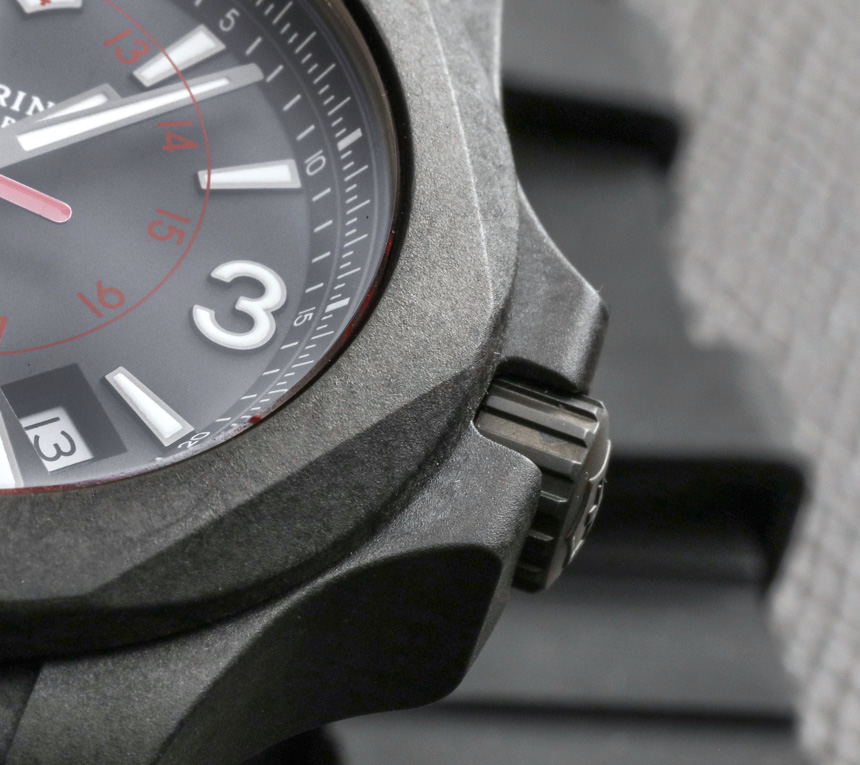 Not everyone likes the look of a carbon case. There is an unfinished industrial look to it which is going to be cool or too raw depending on your tastes and perspective. I don’t know that I’d want to wear a carbon-cased watch all the time, but as a sports watch I think it is pretty cool. It is also arguably quite fashionable today, and the material itself tells a good story that I think a lot of guys will appreciate.

The case is the same shape as other 43mm-wide Victorinox Swiss Army INOX watches and still water-resistant to 200 meters. The rear of the case is steel, and I think that there is a steel inner-case as well. Also, don’t forget that, as this is an INOX watch, Victorinox Swiss Army traditionally supplies a rubberized case guard that you can put over the watch for additional durability. 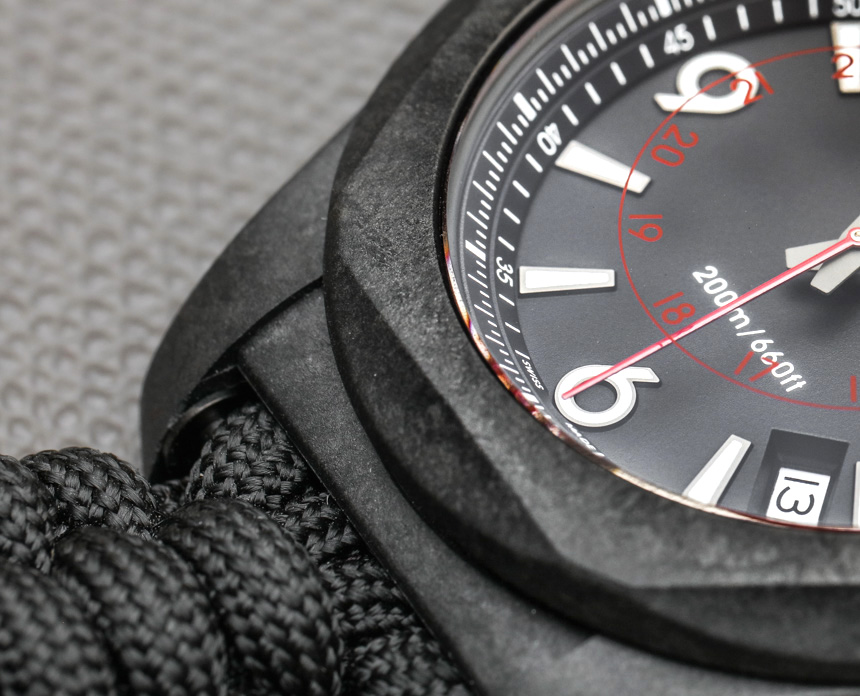 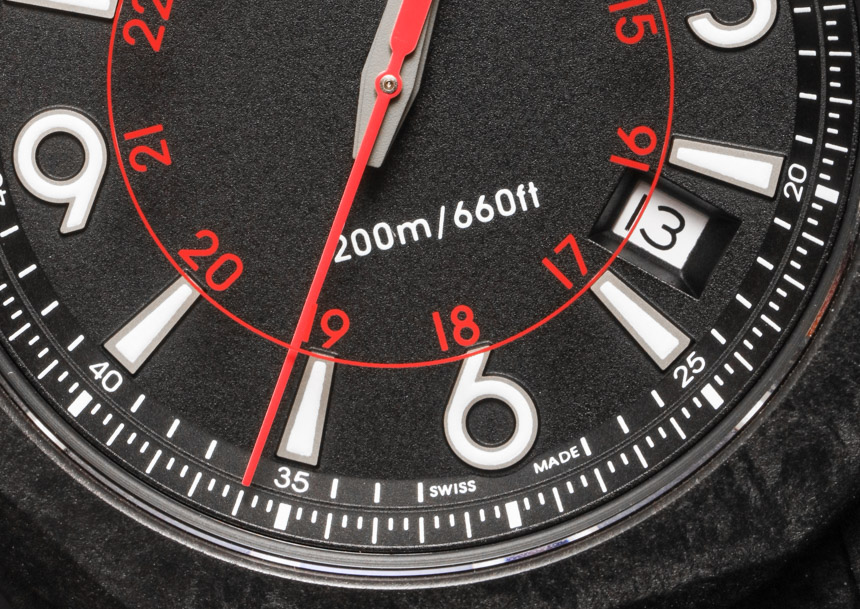 Over the dial is an AR-coated sapphire crystal which, like the Victorinox Swiss Army Airboss Mechanical Black watches (review here), has a red ring printed on the underside with the military time. This is a controversial design element that I happen to like, but not everyone does. At least, here it doesn’t cut through the date window. I do appreciate the interesting sense of depth that ring on the crystal adds to the look. I want to mention that I don’t think the top of the sapphire crystal has AR-coating on it and, even though it is flat, that makes it have some glare. I also found that it is a bit of fingerprint magnet, so try not to smudge up the crystal too much or you’ll be cleaning it a lot with your shirt. 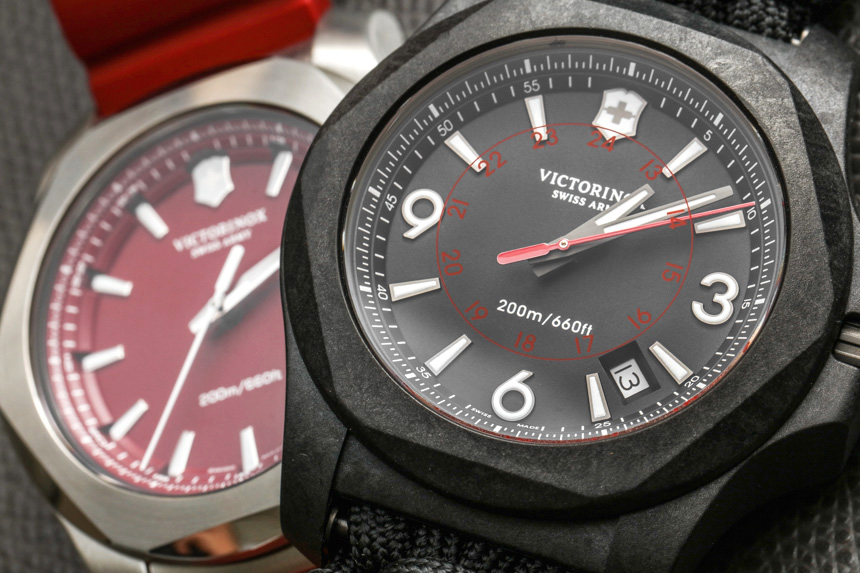 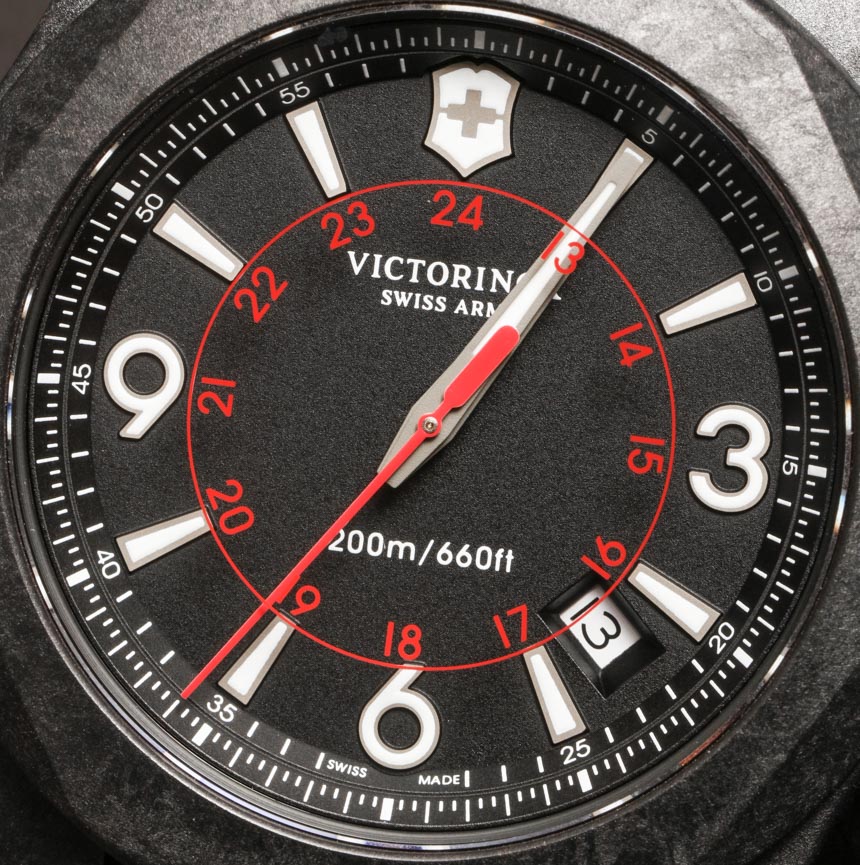 The dial design of the Victorinox Swiss Army INOX Carbon is updated in a few ways, and I already mentioned the 24-hour time ring placement. You also have a more military look with the 3, 6, and 9 o’clock hour markers being Arabic numerals while the rest of the hour markers are baton indices or the brand’s logo at 12 o’clock. Don’t forget that one of the durability tests for the INOX is to ensure that despite severe shock the applied hour markers stay in place.

Luminant is applied to both the attractive (and well-sized) hands as well as the hour markers. Double rows of smaller-increment markers line the flange ring. The lower ones are for the seconds (I’m happy to report that my Victorinox Swiss Army INOX Carbon has a second hand which lines up with the markers perfectly), and the upper one is just for style – as these would be used on a chronograph and aren’t markings that are useful with this movement. That’s not really a downside, but just a small quirk that timing purists will notice. 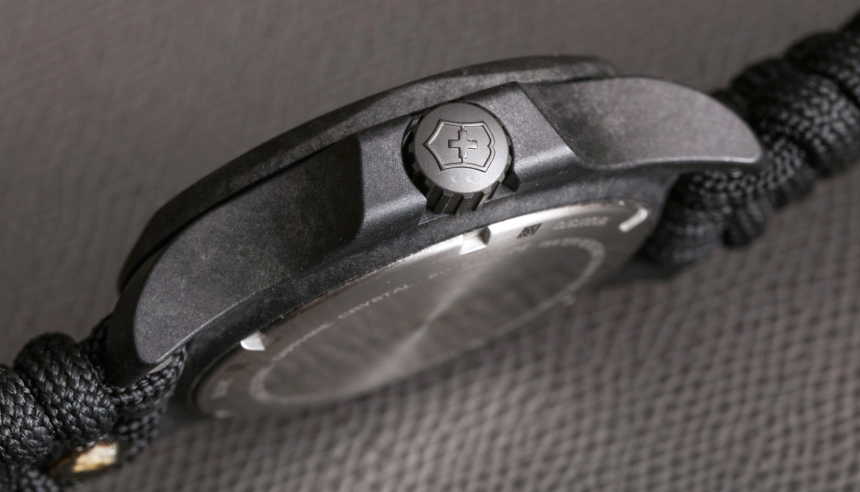 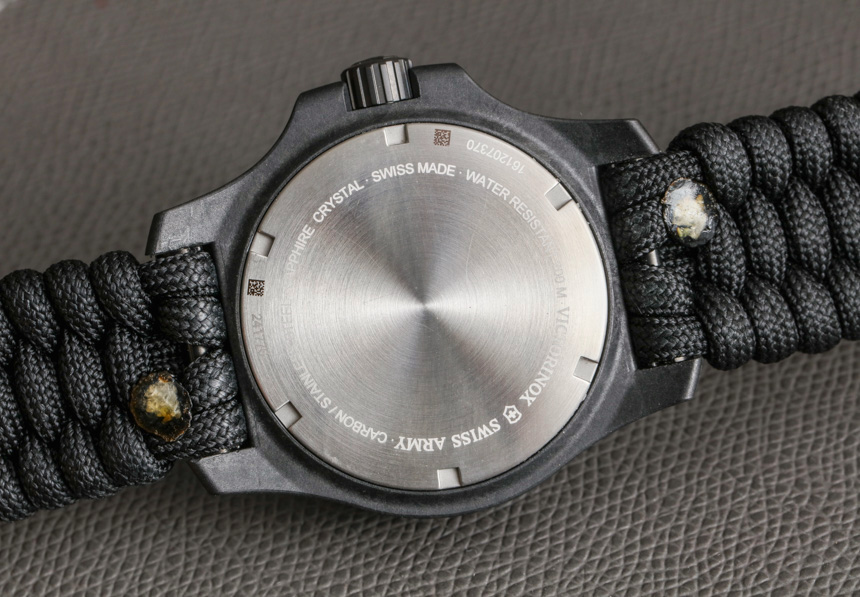 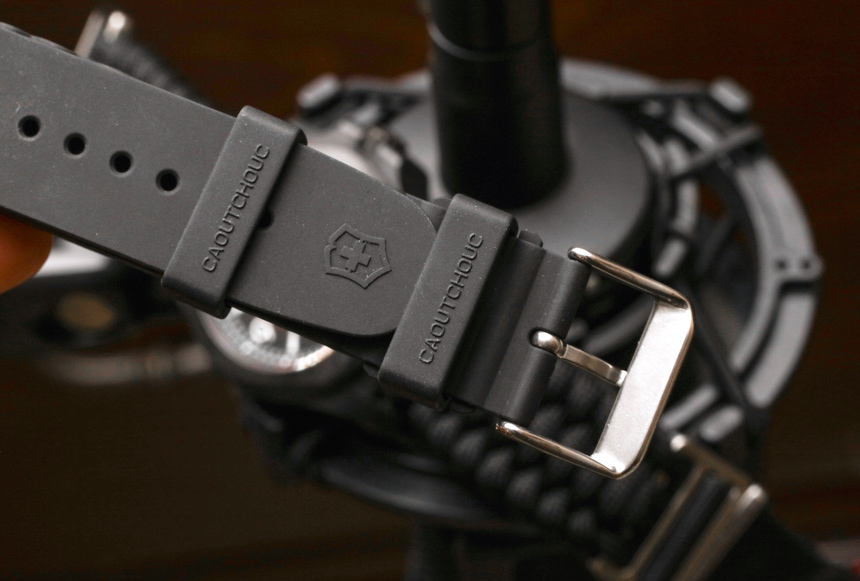 Inside the Victorinox Swiss Army INOX Carbon is a Swiss quartz Ronda movement. It offers the time and date, and is suitable for most situations. Again, purists like having mechanical movements in watches, but for that Victorinox Swiss Army has other projects. In reality, a mechanical movement would not withstand the durability tests the INOX needs to survive, so in this situation having a quartz movement is actually better for the watch’s stated purpose.