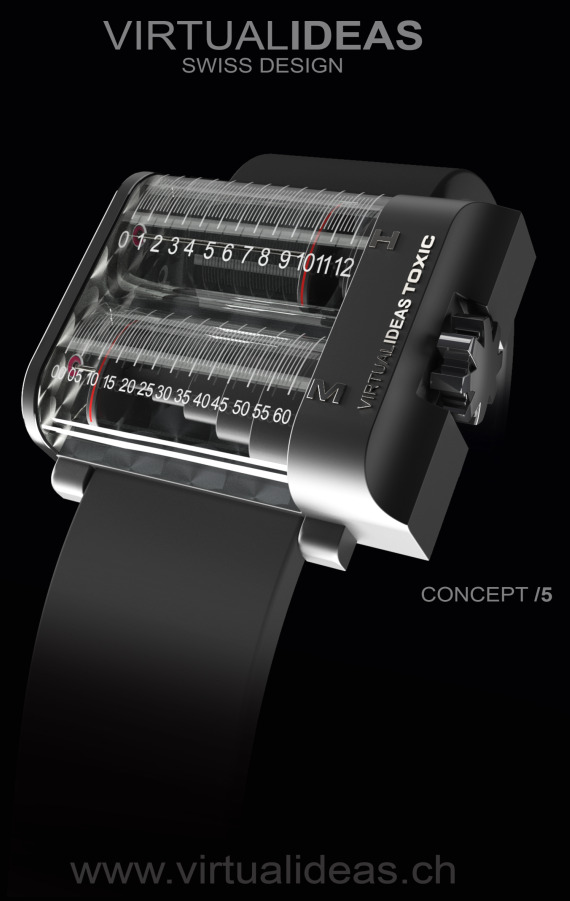 With linear time indicators that resemble syringes, the “Toxic” watch concept creation by Swiss Virtual Ideas is another neat idea by the watch design firm. Showing time on linear scales means that an indicator moves across a scale and then jumps back once it reaches the end. Look closely and you can see a telescopic arm that moves across the dial with a red strip for the indicator. It moves like a vial filling up or emptying at the arm extends and pushes in the indicator. It would have been cool for it too look like one side of the indicator was filling with a colored liquid. The telescopic arm would be difficult to manufacture but by no means impossible. I like how Virtual Ideas has pushed the envelope of watch engineering limits, but still within the range of possibility. Nevertheless, a watch like this would cost a lot. Recently, I discussed the Urwerk King Cobra watch with a similar liner time concept.

The Toxic watch concept features a horizontally long rectangular case with soft curved edges on the top and bottom, with sharped curves on the right and left side of the watch. The case would ideally be made in some satin finished metal. You can see the perlage polish on the inside of the dial – that would require a series of expensive to manufacture sapphire crystals. The Toxic watch displays just the minutes and hours, and nicely indicates what scale does what with a clear “H” or “M” next to the scales. While a watch like this is anything but ordinary, it actually succeeds in not being that hard to read, I dig it. Though I would also be a bit apprehensive of a needle sticking out of it! 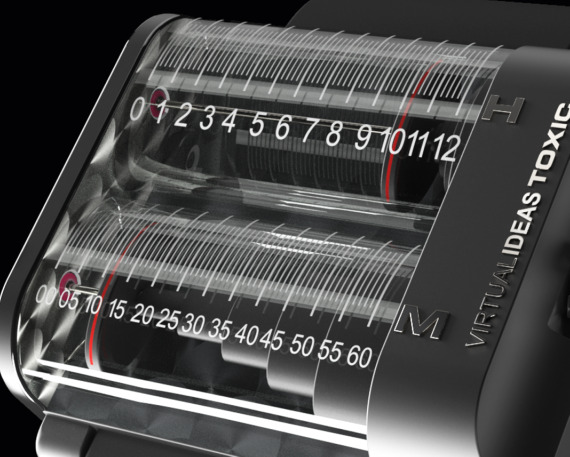 The watch would have to be large. Likely on par with the dimensions of a Cabestan watch – similar in shape as well. The movement would be manually wound and of course would need to be custom made. Problem of course is power. The segment of the case with the Virtual Ideas logo could theoretically house the movement, but it would need to have some clever machinery to house a manually wound movement that could have enough power to operated the large telescopic arms. With some effort, the watch could be pulled off though. I can’t image a price however for a watch like this that would be under $100,000 if it was mechanical movement based. More details on novel Virtual Ideas concept watches as they become available. If you are, or are part of a watch maker and want to Virtual Ideas to work with you, simply go to their site (link above) and contact them.