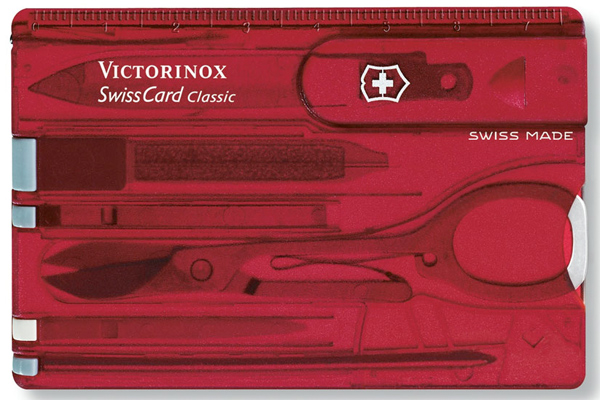 High Quality Spy Gadget “Q” Watches From Veldini To Arrive Soon; Three Versions For The Spy In All Of Us 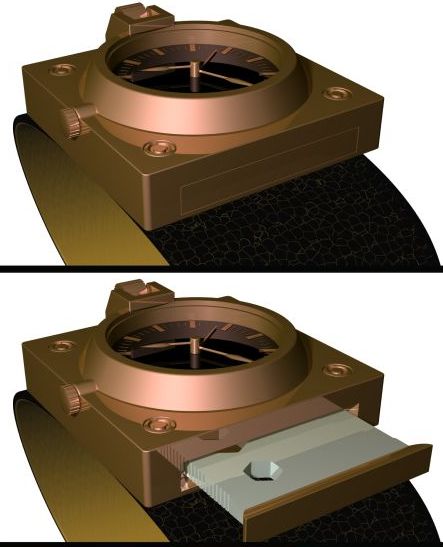 No one who likes watches doesn’t like cool gadgets. Gadgets are little morsels of functional goodness. Items designed specifically for the purpose of doing one or more things (aside from sitting there). Gadgets can be tools, but can also be so much more. So if you don’t like cool gadgets, then stop reading. But if you do, then this new line of products from Canadian Veldini will certainly evoke an audible “cool” from you.

Do you remember playing with spy toys as a kid? Those plastic things that you wished came in professional quality? Well I remember, and I think most of the real stuff was reserved for the CIA, and alike agencies. And now, when I am (publicly) too old to play with toys, comes Veldini with its Q watches. Three models are due for release, the Q; Outdoor, Spy, and Everyday. Further the watches will come in three materials, sterling Silver, yellow gold, and rose gold. Prices depend on the material used and will range from $2,000 to $15,000 dollars.

So lets talk about what these watches will do, as that is certainly the main attraction. Each of the different types (i.e., Spy, Outdoor, and Everyday) has a different tool card that slides out of the watch. Feasibly, you could have one watch and three different interchangeable tool cards. Though it is unclear whether the watches will be sold in this way. The cards are very similar to the Victorinox SwissCard that came about a while ago. That was a credit card shaped pocket tool, with various implements that either folded out of it or detached. It is basically a flat pocket knife with 13 tools in it. Victorinox proved that you could make functional device that was flat, but they never stuck it into a watch, even though they make a line of Swiss Army branded watches. Note to Victorinox, make pocket knife watches. 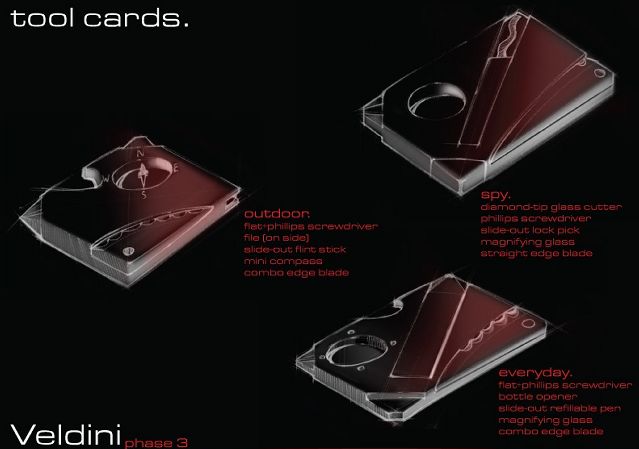 The Veldini Q takes this same approach with a smaller module that detaches from the watch itself (that other than telling time has no tools built in it). Ideally, the tools on the modules are going to be smooth operating and at least as hardy what Victorinox produces (which is high quality). The release mechanism on the watch is really cool and shaped like the hammer on a pistol. You pull back on the hammer with your thumb to eject the tool card; nifty. Here are the tools that you can get. Q Everyday: flat-head screwdriver, bottle opener, refillable slide-out pen, magnifying class, and serrated knife. Q Outdoor; flat-head screwdriver, file, flint stick (for starting fires), compass, and serrated knife. Q Spy; diamond tipped glass cutter, Philips head screwdriver, slide-out lock pick, magnifying glass, and straight edged knife. Pretty cool, but I would want them all.

The watch itself has style elements from all over the place, yet there is nothing out there that looks like it. The shape of the case looks like a Bell & Ross BR-01 with a gun trigger, though the strap is connected from the bottom, without lugs, but rather bolted to the case. This is needed for the slide out module to work well. The face is quite sparse and likely large. Clarify will be good, but I would have liked to see some more functionality. A jet-setting spy could use some additional functions. GMT maybe? A chronograph? That isn’t too much to ask for is it? The images probably don’t do the watch too much justice. I look forward to seeing one in the flesh for a real determination of how well it would go with a tuxedo.

Now here is the odd part. The whole idea of a “spy” watch is to be stealthy. James Bond’s toys were so cool because they were disguised. Otherwise the villains would have just stripped them off him each time he got caught. The Veldini Q watch doesn’t exactly hide the fact of what it is. Rather it embraces it. If I were a villain, it would be the first thing I look out for. So while the watch will function as a cool wearable pocket knife, it isn’t exactly going to blend in too much. And honestly, where is my friggin’ laser cutter? I don’t care if I have to attach the watch to a car battery that I wear on my back, I want my spy watch to shoot laser beams!

We will have to wait a bit to see this watch in action, but it looks promising so far. Lets hope that Veldini provides a nice instructional video on how to use the diamond tipped glass cutter and lock pick. Otherwise I am going to be caught in some very compromising situations while practicing.

See Veldini and other “Spy” watches on eBay here.