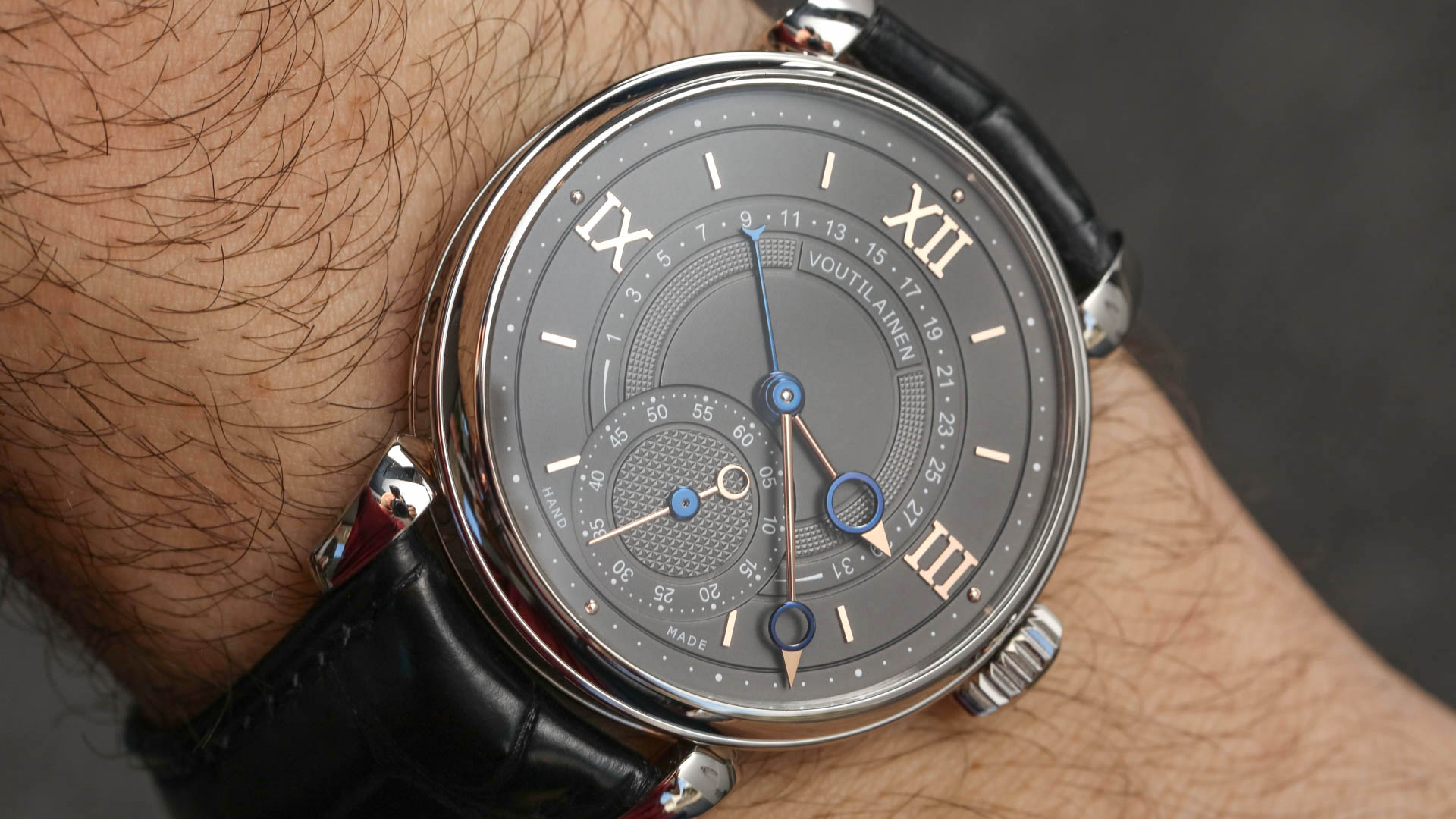 Released earlier this year, the Voutilanien 217QRS embodies everything the independent watchmaker is known for. Aesthetically, it makes one recall the recognizable Vingt-8, but the effortlessly elegant retrograde date display at the center of the dial is an indicator that we are looking at a more sophisticated and more impressive timepiece. That’s saying a lot even by Voutilanien standards. The remarkable finishing and tasteful, almost mix-and-match design all made for one of the most impressive watches I saw at SIHH, and with the new year around the corner, I figured this was a good time to revisit this watch that almost flew under the radar. 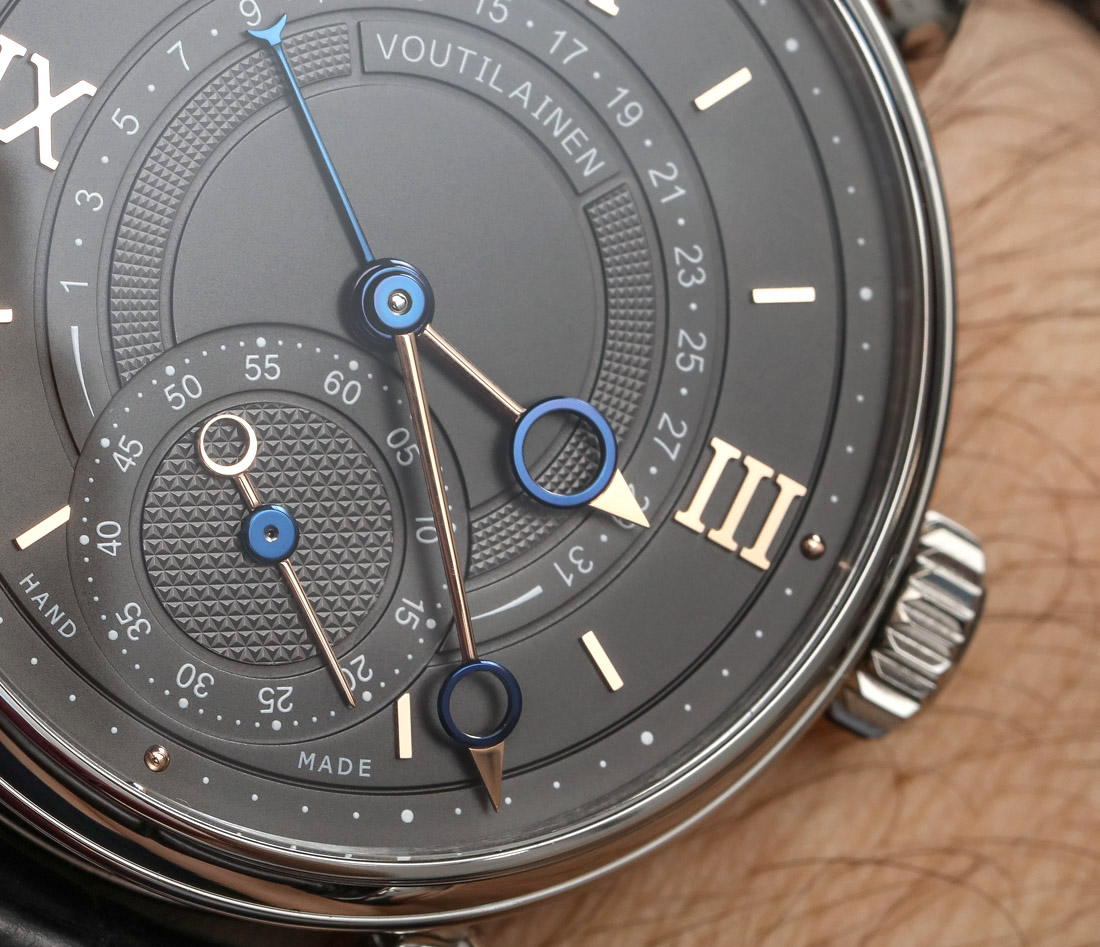 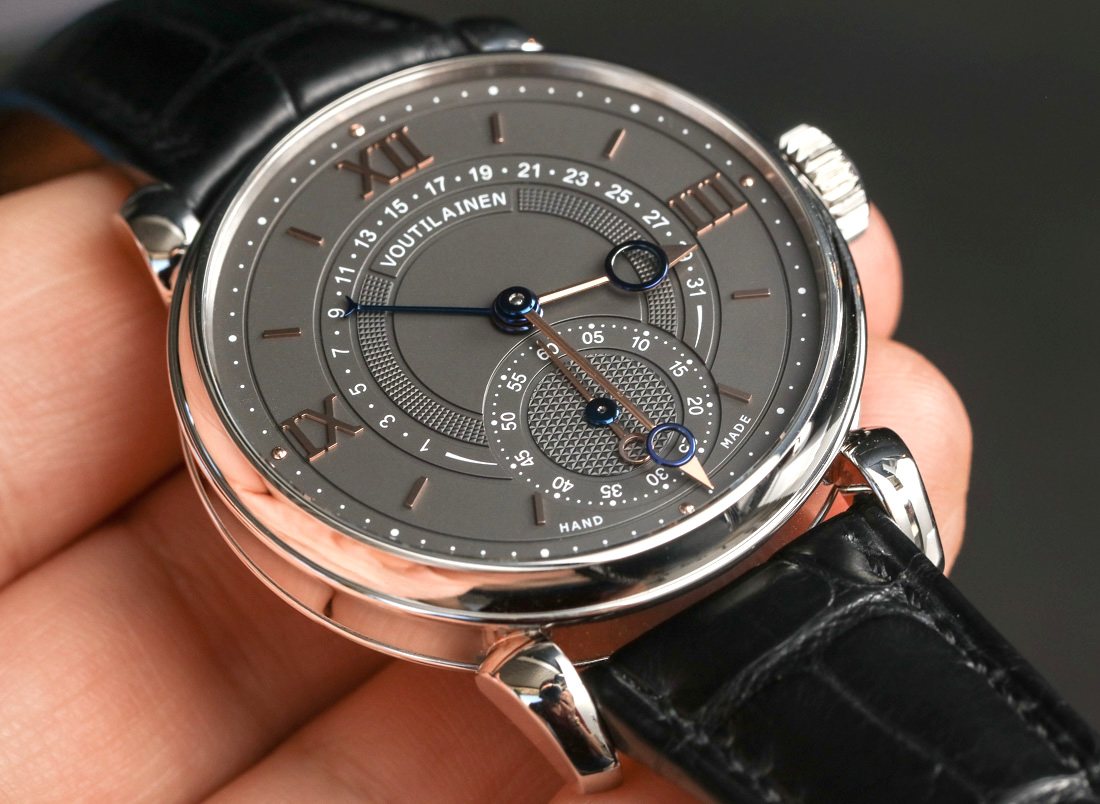 The retrograde date display is actually integrated into the dial, which allows for a simple adjustment done by a simple push of the crown. At the end of the month, the date goes from the 31st to the 1st gently, not with a harsh jump or bounce. The dial design for Voutilanien’s timepieces have always hearkened back to pocket watches, but the visual and finishing contrasts always add a level of playfulness that I love. 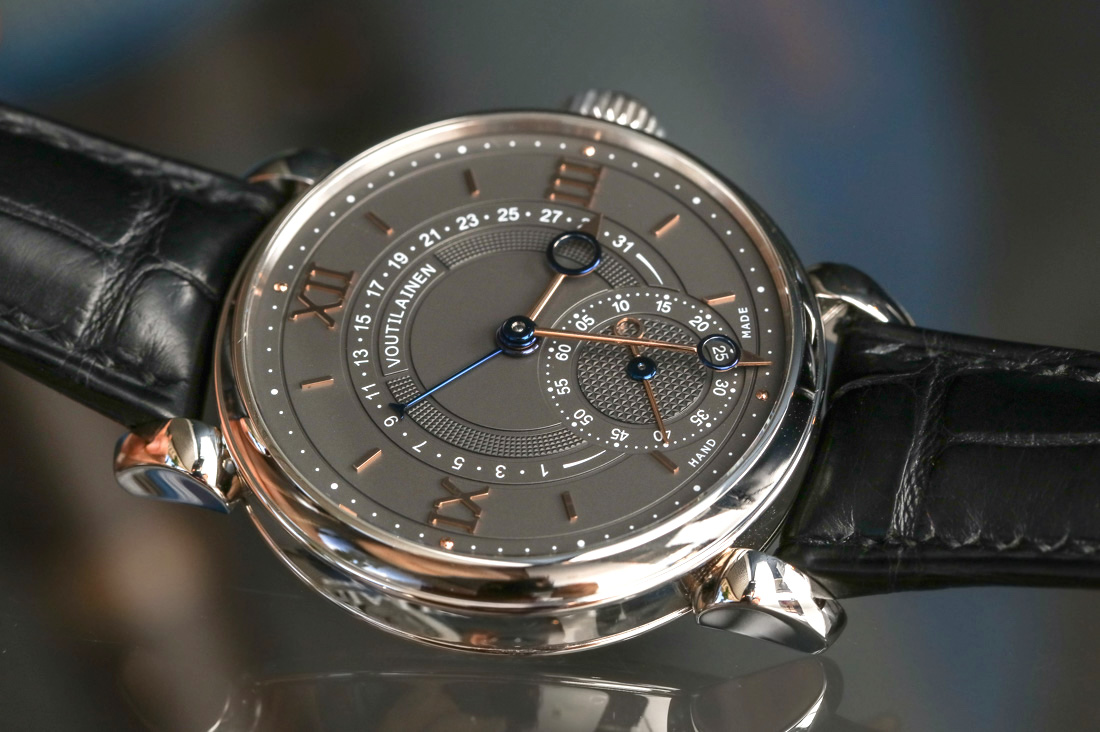 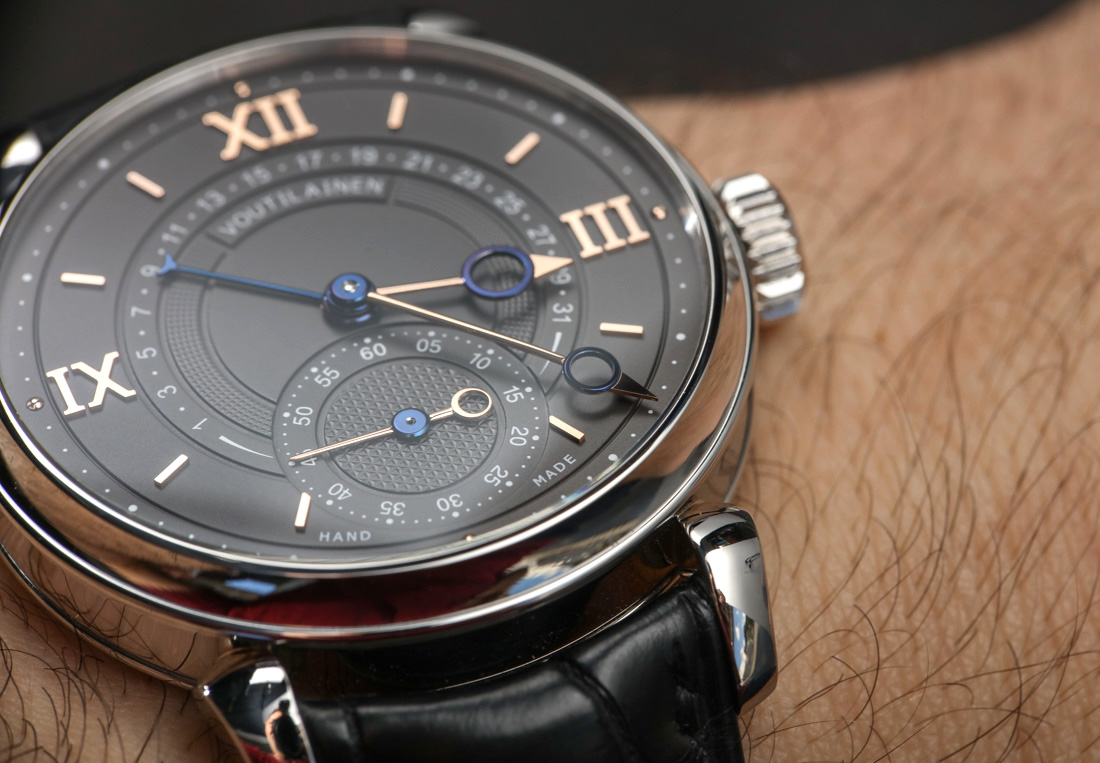 Again seen here, the hands are done in two colors, gold and that beautifully done blue. There’s an inner track below the retrograde display that’s done in guilloche along with the seconds sub-dial which contrast the clean slate gray colored dial. Everything is finished by hand and while these photos get the quality of the finishings across pretty well, a Voutilanien timepiece is something meant to be admired and worn in person. 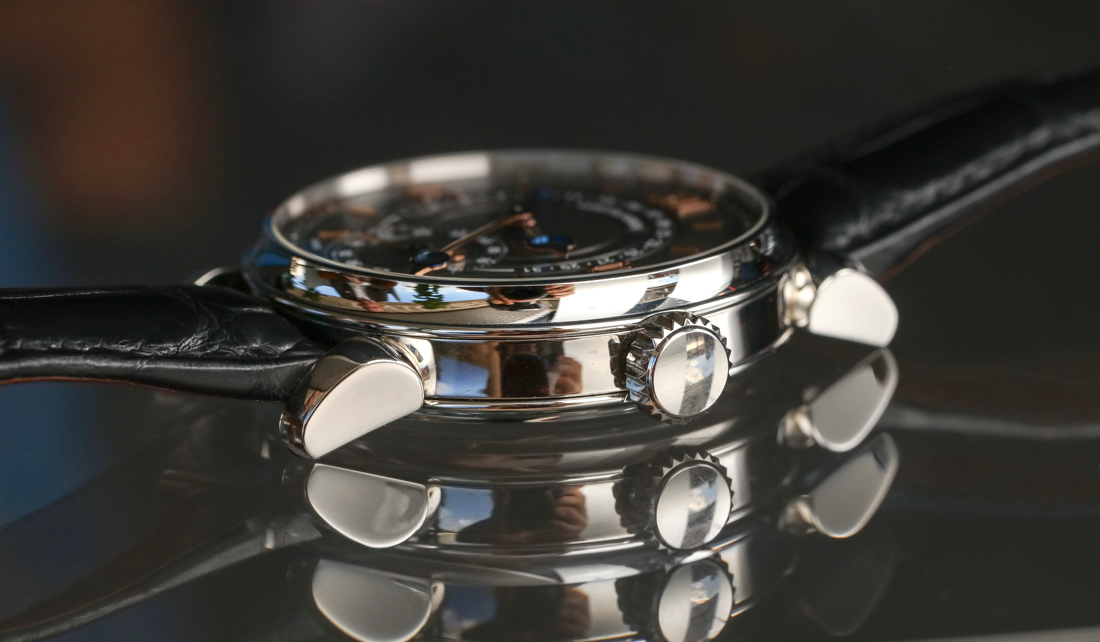 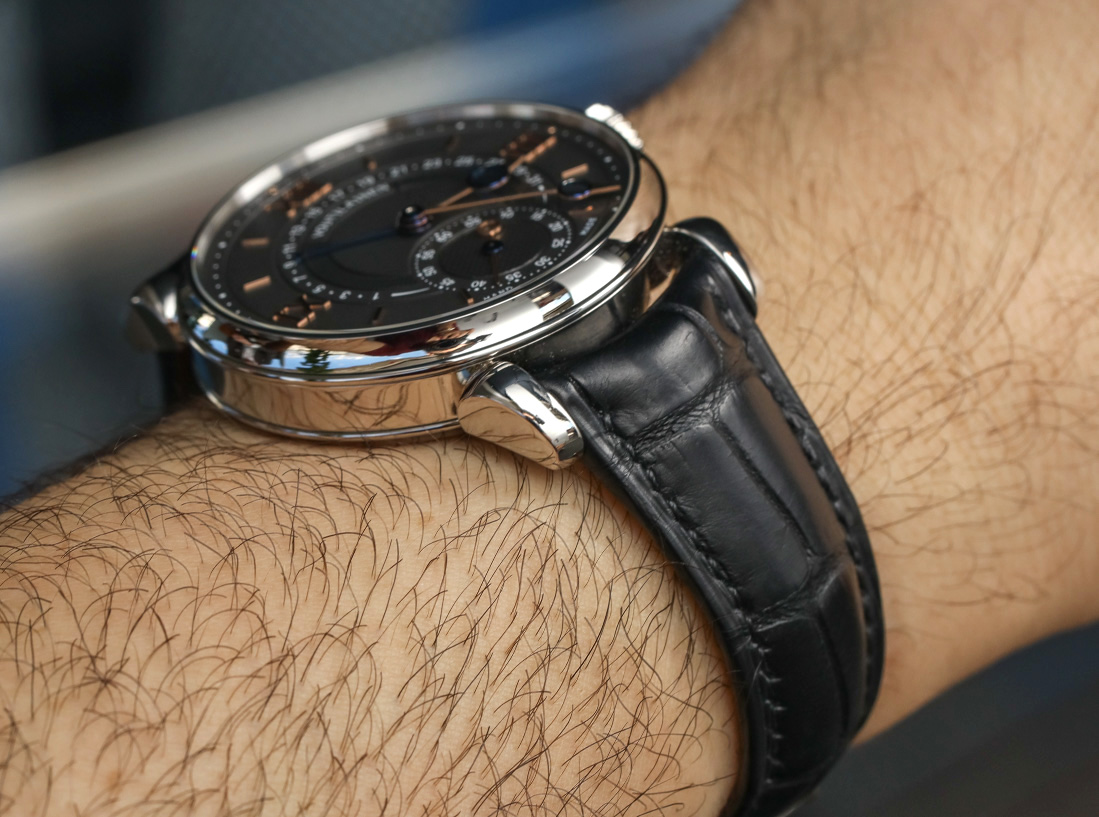 The 217QRS case (seen here in white gold) is 39mm wide and 11.5mm thick and those teardrop-shaped lugs help to create that “classic” wrist presence. This version is done in white gold, but the watch comes in three precious metal variations with one in platinum and one in 18k rose gold. The three have variations on the dial color, as well with the platinum model coming in blue and the 18k rose gold model done in white. I have to say I probably prefer the other two to the white gold variant simply because they have Arabic numerals on the dial as opposed to Roman numerals, which I can always do without. 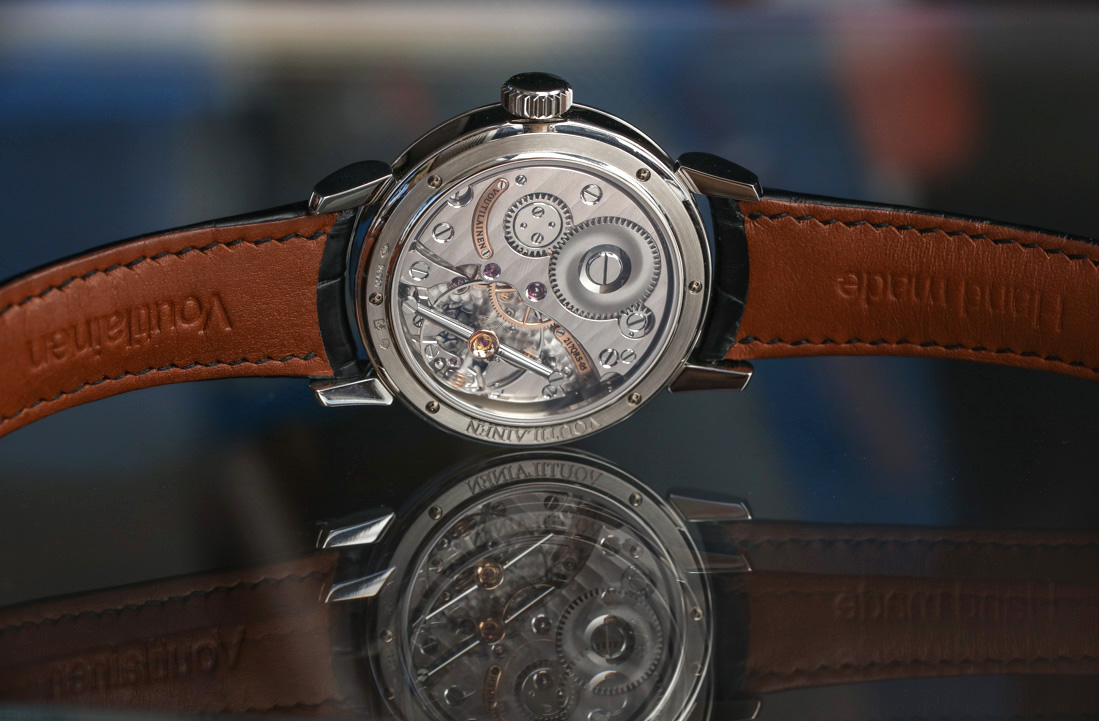 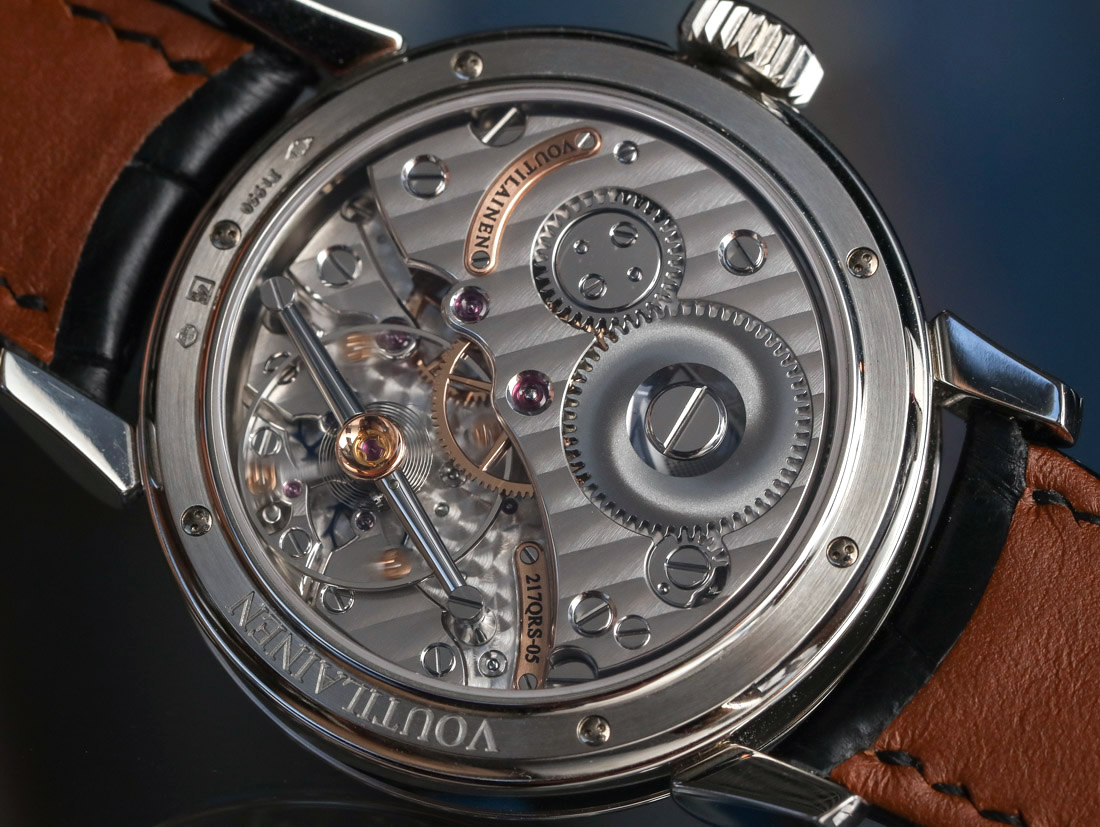 The 217QRS runs on the manually-wound Calibre 217QRS, which immediately shows off the massive in-house balance wheel that measures in at 13.6mm. The balance wheel is also special because it uses a balance spring which has a Phillips overcoil but with a Grossmann internal curve. Like in the Vingt-8 movement, the escapement uses double escapement wheels.

The purpose is, in short, to improve efficiency and reduce the amount of energy the movement uses. As Ariel wrote when he went hands-on with the Vingt-8, “Most notable is the use of double escapement wheels. With a system unique to Voutilainen, the balance wheel has two escapements versus one as power is slowly and carefully released from the mainspring to the gear train. The idea here is to offer a more precise level of power regulation to result in improved accuracy.” 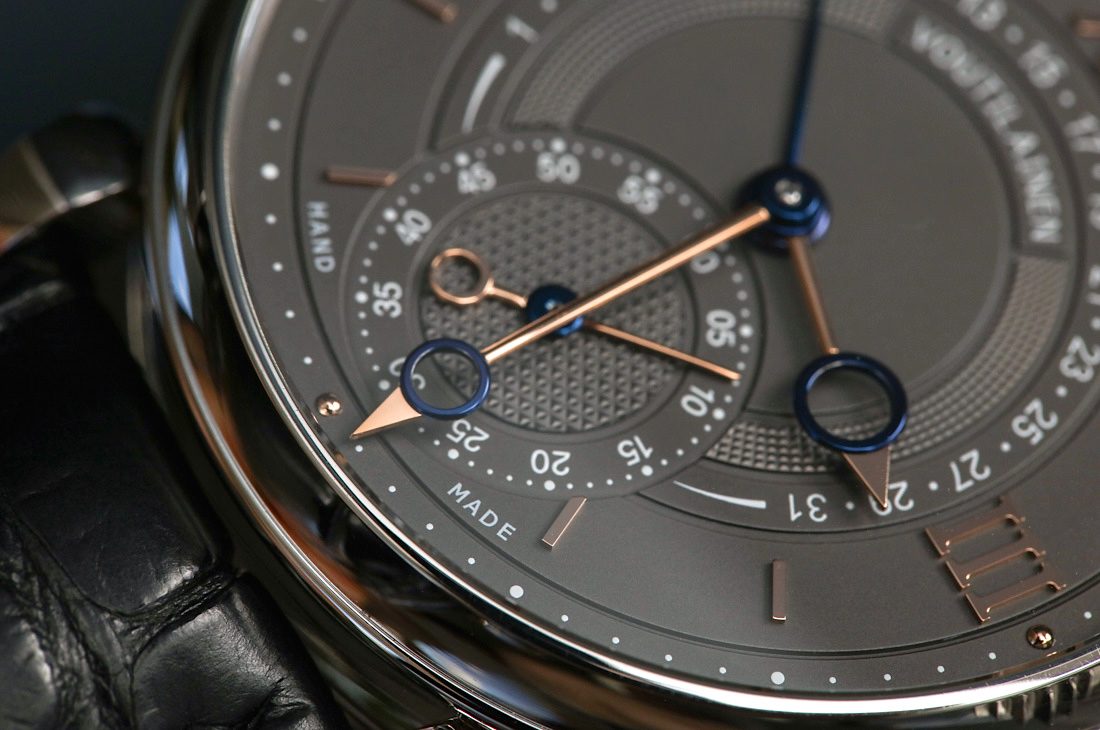 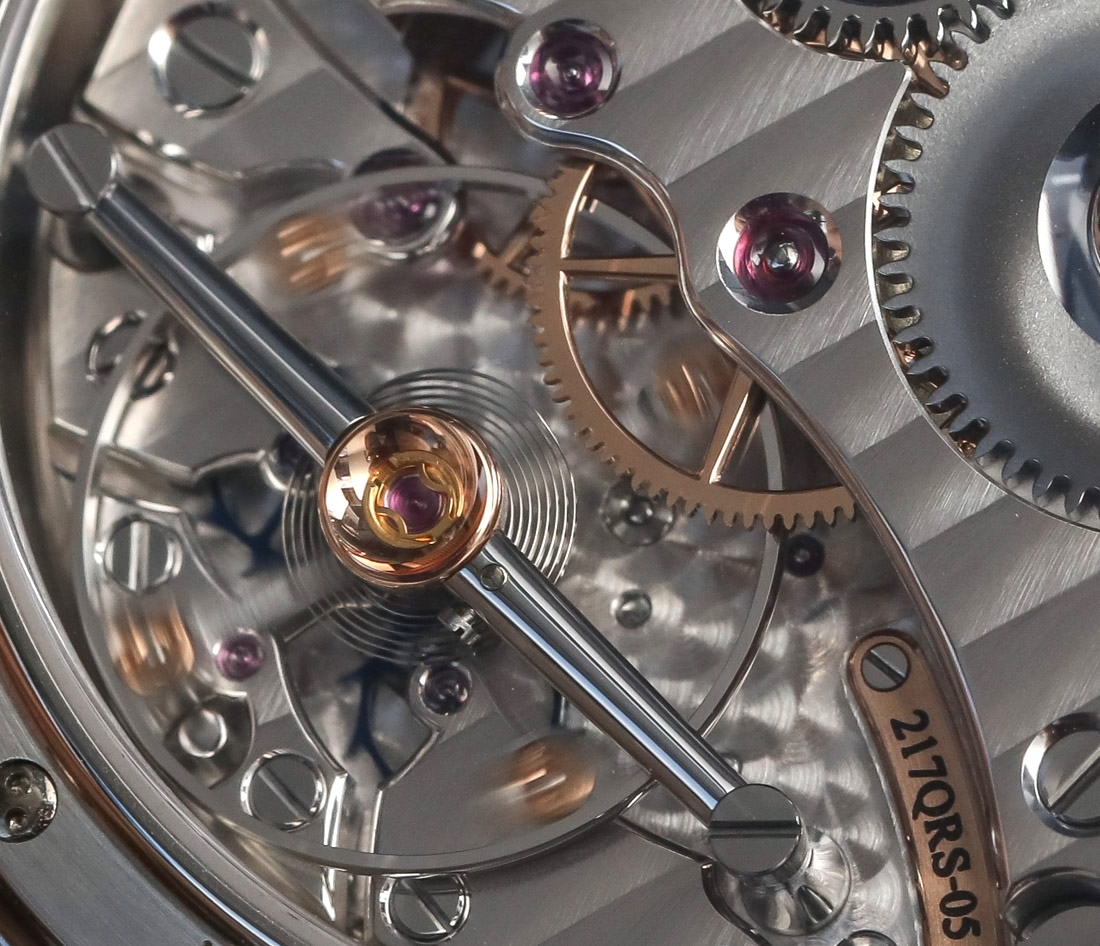 The movement operates at 18,000 vph with a 65-hour power reserve, but it’s the finishes and that big balance wheel that grabs one’s attention. Of course, everything here is finished by hand including the Cotes de Geneve on the silver bridges with the rest of the surfaces being chamfered and polished to perfection. The fact that everything is done by hand so meticulously goes to reaffirm what almost anyone familiar with Kari Voutilanien’s work already knows. It’s tough to improve on this kind of quality and obsessive attention to detail. 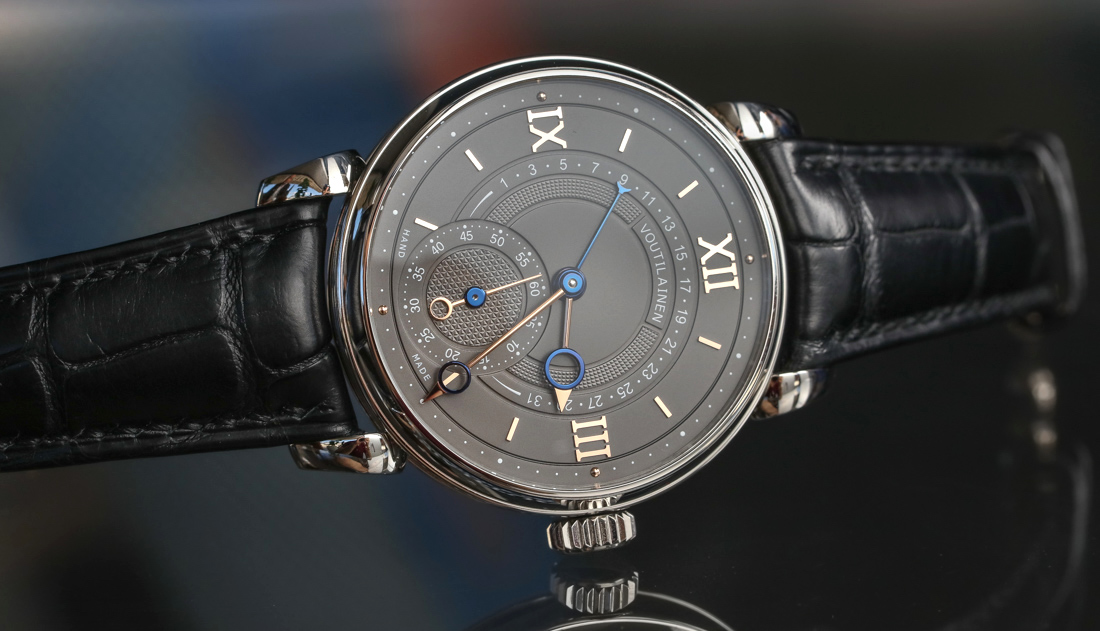 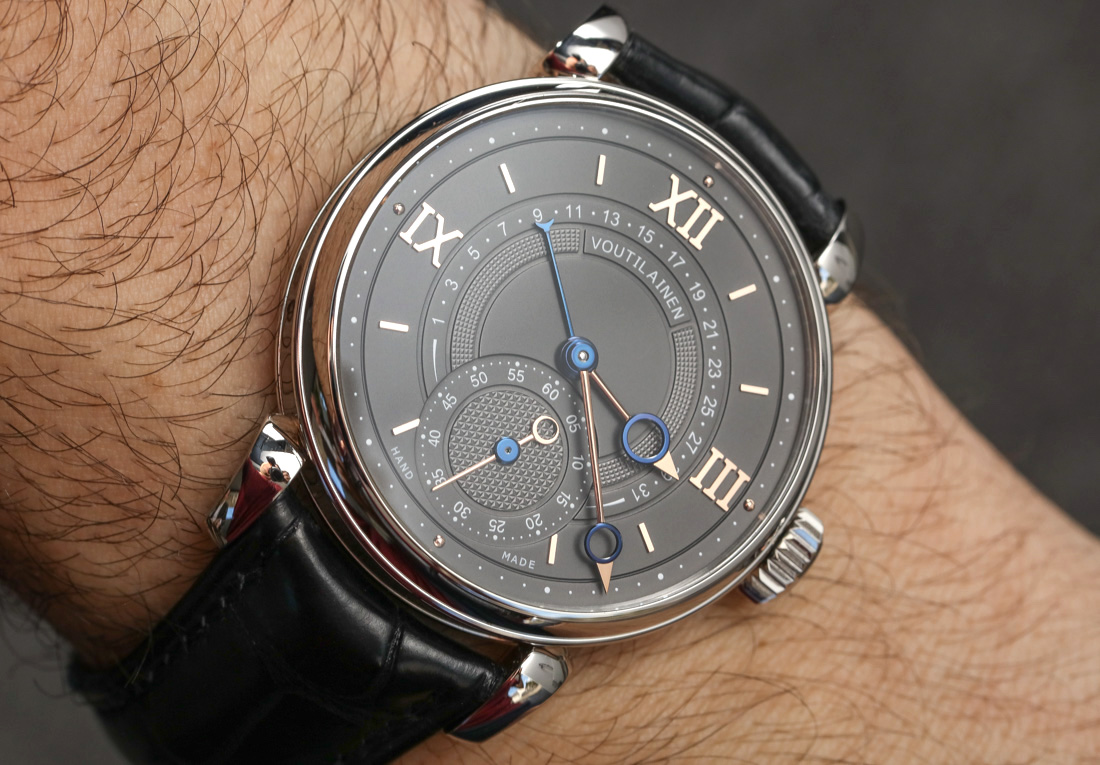 Few people will have the pleasure of owning a Voutilanien 217QRS since 30 pieces will be produced. 10 in white gold, 10 in platinum, and 10 in 18k rose gold. The gold versions come with a price tag of 118,000 CHF while the platinum is a little pricier at 128,000 CHF. You may not find a ton of information, but check out their website at voutilanien.ch for more.