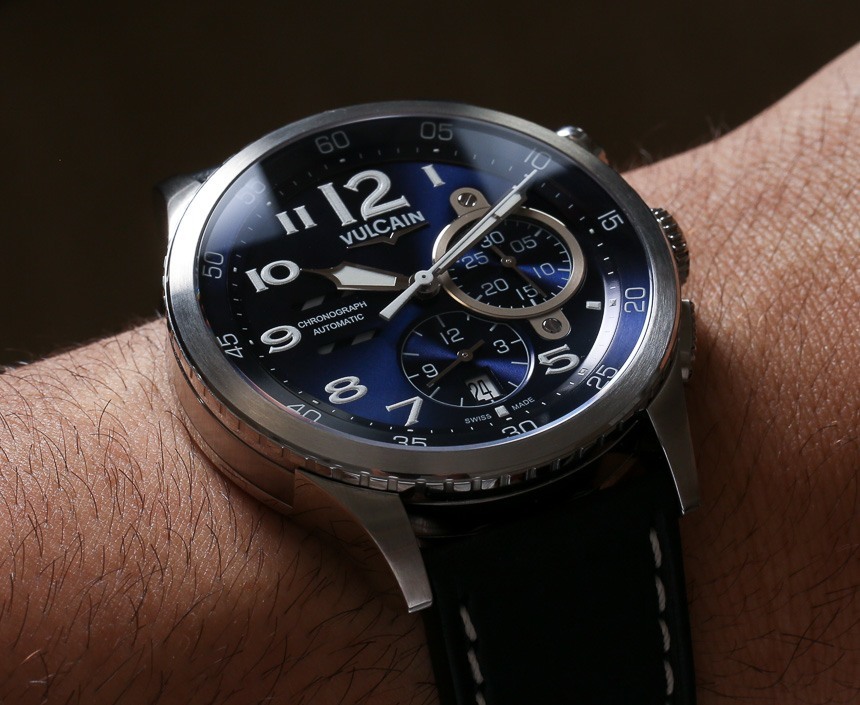 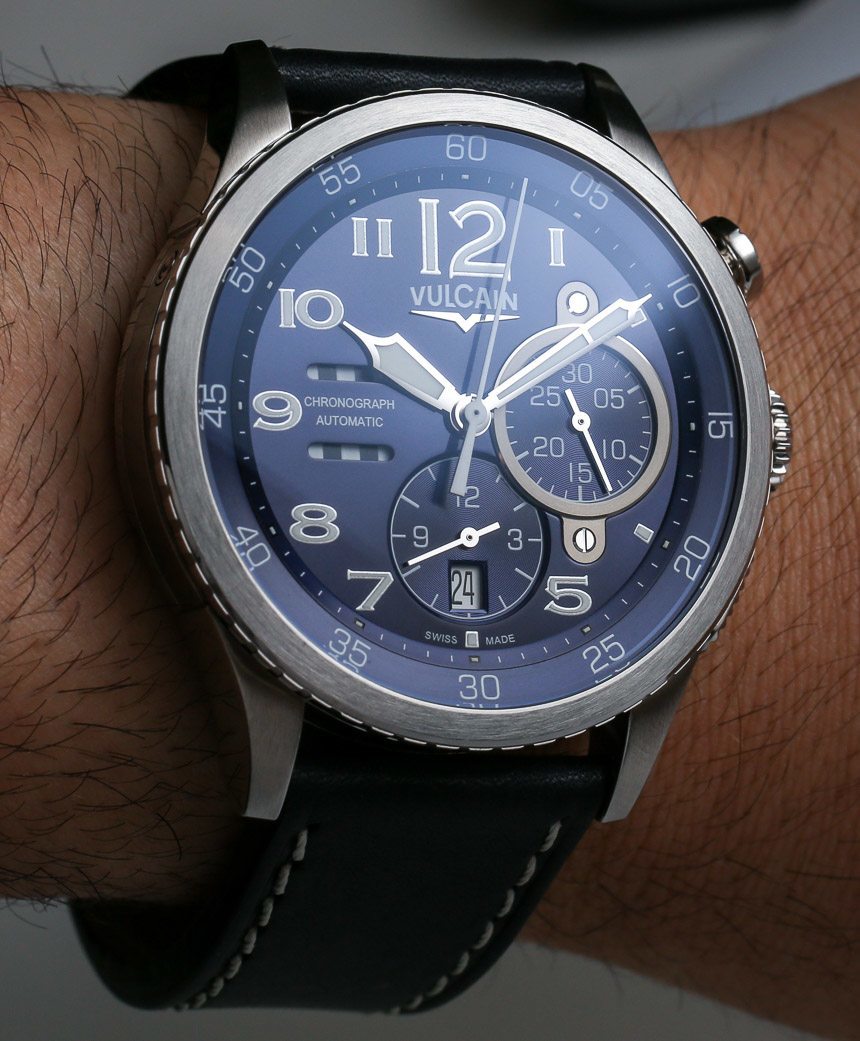 It’s no surprise that pilot’s chronographs are so popular among both watch aficionados and just ordinary citizens. With their aggressive tool watch presence, reputation for precision, and aviation/military heritage, they toughen up pretty much any wrist. But there are a ton of iconic pilot-styled chronographs out there to choose from – so why might one choose this new model from Vulcain, which recently brought out its own version, the Vulcain Aviator Instrument? What sets it apart in an already-crowded marketplace? Well, it turns out, a few things…

The Vulcain Aviator Instrument Chronograph isn’t the first flight-themed watch in Vulcain’s history – the company also offers the Aviator Dual Time in its collection, a very cool GMT timepiece. But the Vulcain Aviator Instrument is Vulcain’s first pilot’s chronograph. Vulcain, of course, is a venerable Swiss manufacture currently enjoying a resurgence among its cultish following of connoisseurs, having revived itself in recent years after being one of many watch brands felled by the Quartz Crisis in the ‘70s. 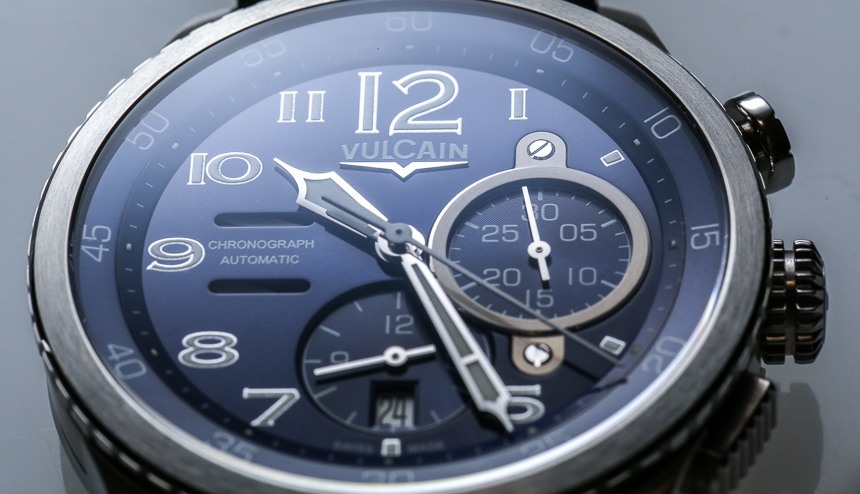 Vulcain’s reputation was grounded in watches that have become icons in their own right. The Vulcain Cricket is perhaps the brand’s true classic: one of the earliest and most successful iterations of the alarm complication, the Cricket became known as the “watch of Presidents” due to its being a favorite of many of those inhabiting the Oval Office (Harry Truman was a Cricket fan, for example). Vulcain also has a reputation for its dive watches. Upon its introduction in the early ‘60s, the Nautical Cricket dazzled not just for its jazzily distinctive dial, but for a then-ingenious system to track decompression times and a unique case design that allowed divers to hear the alarm function underwater with loud clarity.

But Vulcain also made a superlative line of chronographs in the ‘60s and ‘70s that aren’t as well known as its flagship models. Typically powered by gorgeous Valjoux movements, these chronos combined their timekeeping precision with an aggressively ultramodern design sensibility that had real wrist presence. Indeed, these watches weren’t homages to anything; they inhabited their own futuristic, groovy horological universe of their own creation. 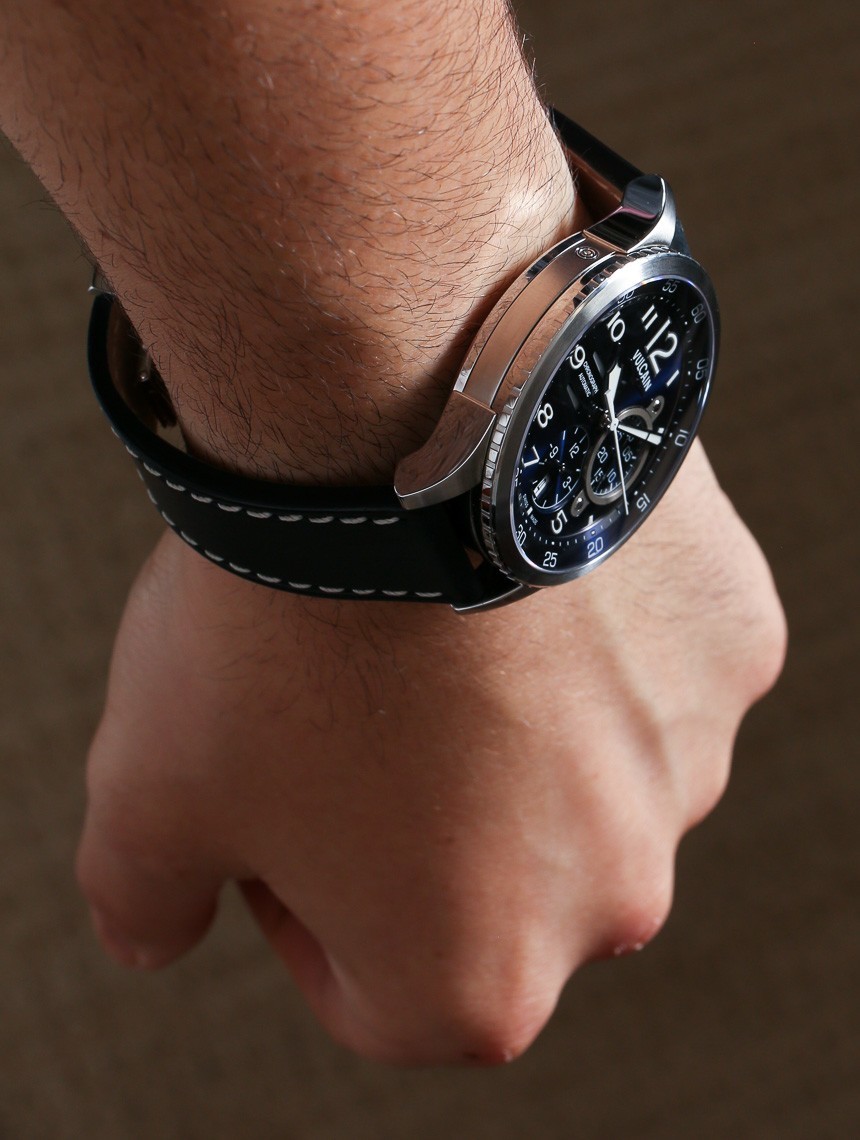 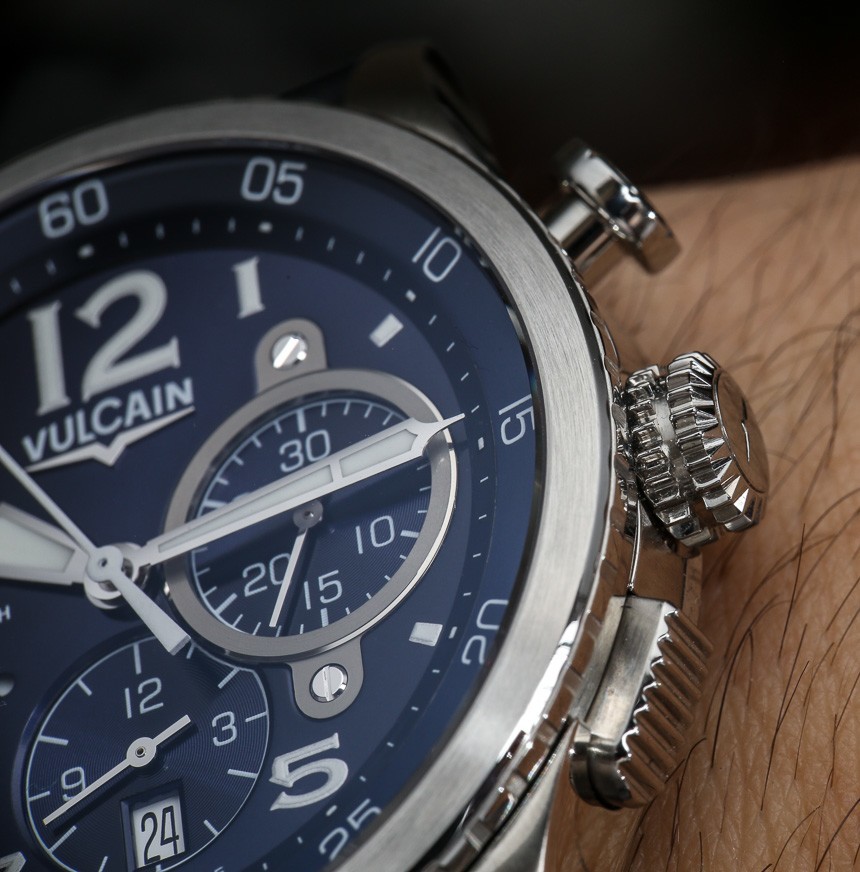 Those chronographs seem to be the family from Vulcain’s history most related to the introduction of the Vulcain Aviator Instrument, which is powered by Vulcain’s caliber V-59 – its take on the Swiss ETA Valjoux 7753, a self-winding, hacking automatic with a 42 hour power reserve and a 28,880 bph heartbeat. The 7753, of course, is a slightly revised version of the 7750 movement family, which has its own unique differences. In addition to moving the minutes counter to three o’ clock instead of the 12 position and the date’s quick-set feature converted into a button at ten o’clock (here operated by a wonderful key-like tool provided by Vulcain), the 7753 is more frequently tuned to high-end specs. Indeed, the Vulcain Aviator Instrument performed at near-chronometer levels, losing just a couple of seconds over the course of a week’s timings. As well, the chronograph functions – from the chronograph seconds hand to the twelve-hour and thirty-minute counters – worked with utter exactitude. 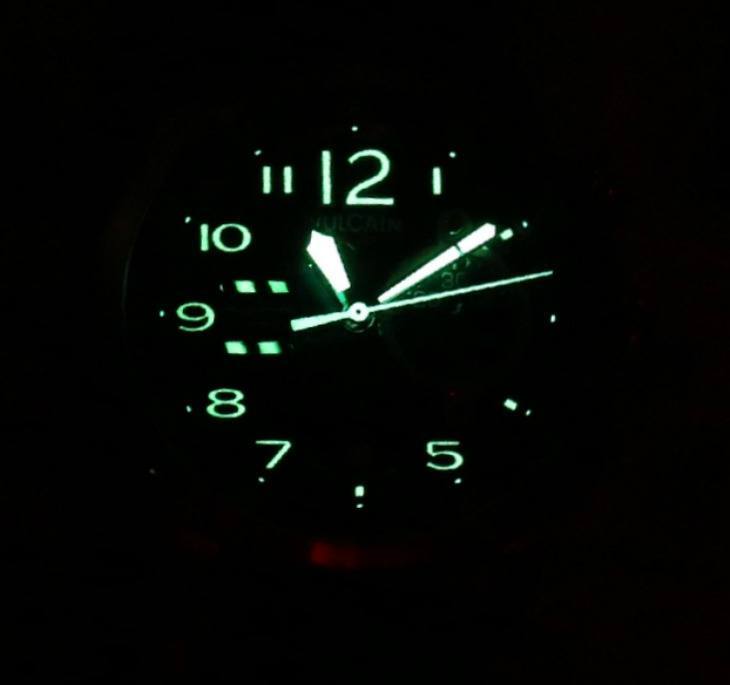 Lots of pilot’s chronographs have 7750 engines, however; where the Vulcain flies high, however, in its finish and a dial design that seems eccentric at first, but is actually quite sophisticated. Compared to the usual suspects of Swiss watchmaking giants, Vulcain represents a more boutique marque, only producing somewhere in the range of 3,000 watches a year. That allows for an attention to detail with each watch that’s clear from the exquisite finishing on the nearly 45mm steel case – a play of polished, matte, and brushed surfaces that doesn’t take away from the Vulcain Aviator Instrument’s toughness, but feels more refined than one might expect. Also, it goes without saying that the Vulcain Aviator Instrument has a dial and movement layout that very much resemble the Graham Chronofighter II watch collection (reviewed here). 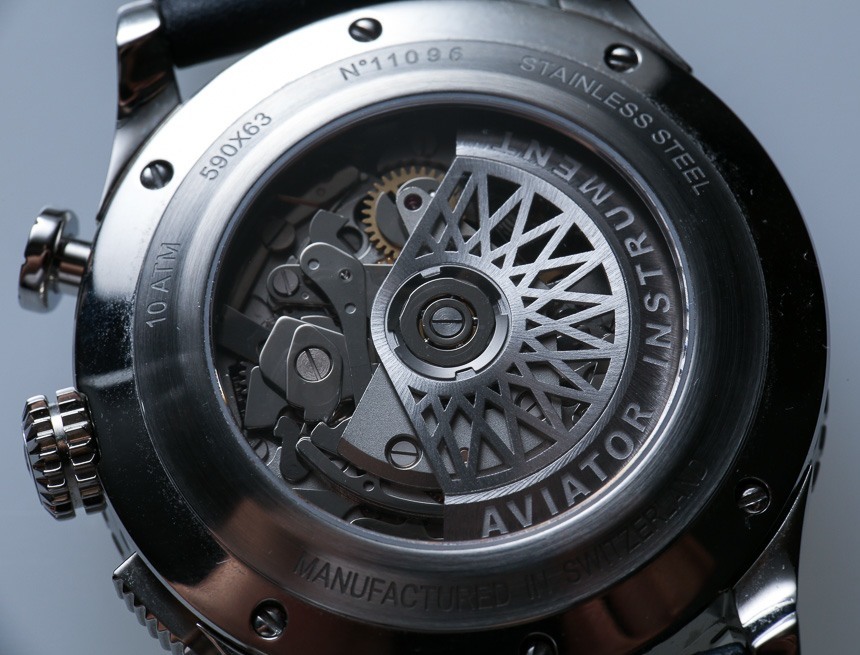 Vulcain is also famed for their dials, and this one doesn’t disappoint: a rich navy whose subtle iridescence shifts in the light from a royal blue to an inky midnight, very legible against the white, perfectly proportioned antique-clock style hands. Vulcain is also famed for its guilloché work, and the Arabic numerals here are ringed in enamel: in the dark, when the lume kicks in, the enamel outline stays dark, which slenderizes the numbers, giving the dial a slightly different, more minimal look.

The watch is placed on a satisfyingly heavy, somewhat rigid leather strap with a deployant clasp – it may be my favorite deployant I’ve ever worn. For one, it’s very comfortable on the wrist, almost to the point that I forgot it was there, and it never snags hairs. But what I like best about it is the exquisite perlage work on its locking mechanism – a detail that really personalizes the watch. With a deployant, you’re constantly locking and unlocking it, so to get this little visual surprise throughout your day is delightful: a secret only for the wearer of the watch. Alas, the movement, showcased via an exhibition sapphire caseback, has very little decoration – a surprise coming from Vulcain, which usually excels in this area. With little striping or jewelling, the movement comes off as a bit austere and industrial, with only a skeletonized rotor adding visual interest. (That said, the skeletonized rotor does look very, very cool). 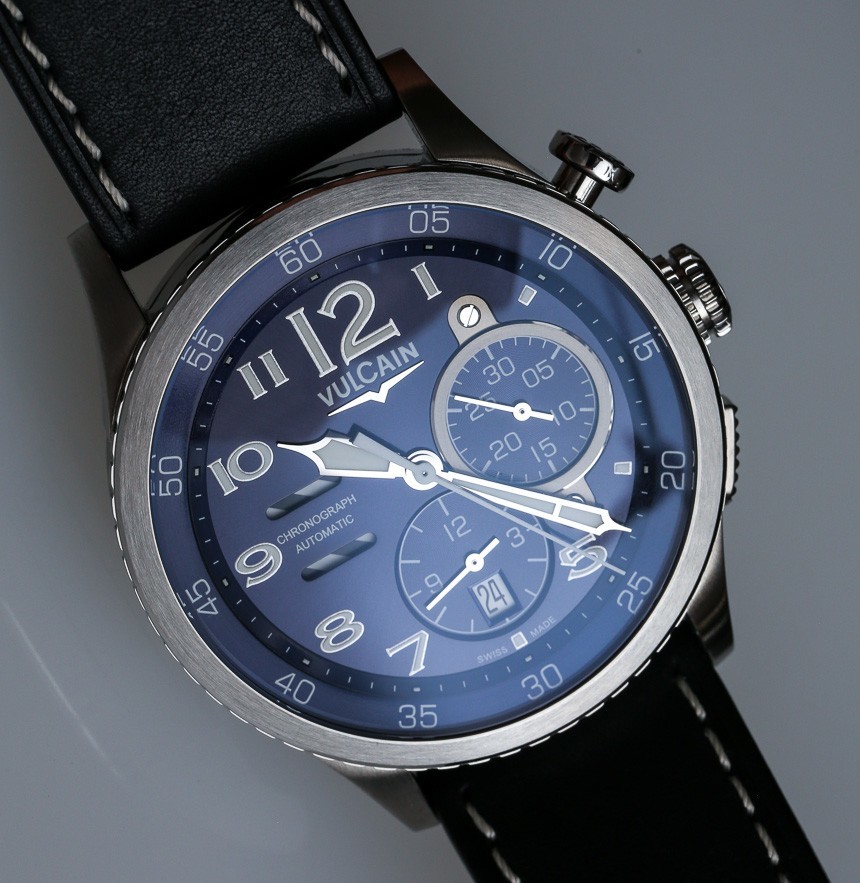 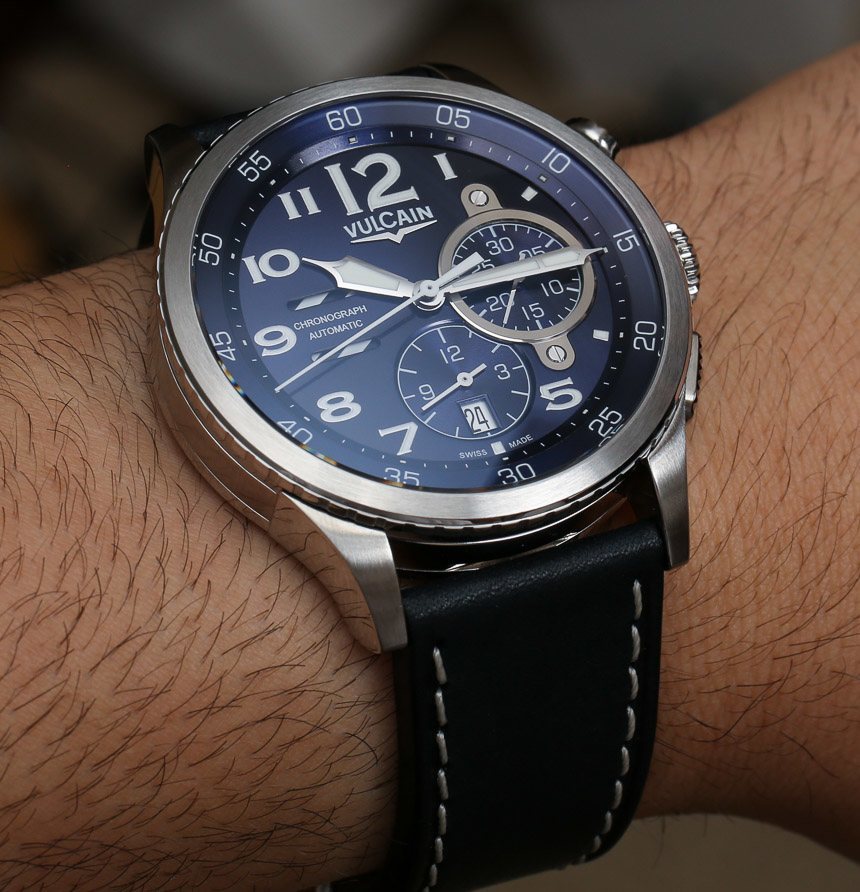 There are a few key elements that make clear this ain’t your grandpa’s pilot watch. A traditional feature of many pilot watches is the large onion crown; however, these crowns sometimes make such watches slightly uncomfortable, as they can dig into the wrist. Vulcain solves that problem here with ergonomic flair, reducing the size of the crown and adding a groove in the middle that allows even the most gnawed fingernail to pull it out easily. But where the Vulcain Aviator Instrument flies highest are the intriguing risks it takes in its use of asymmetry.

For one, the chronograph pushers are totally different shapes. The bottom pusher is a rectangular block with grippable vertical grooves carved into it, while the top pusher has a round cap etched with a design that evokes a propeller in motion. In the other colors the Vulcain Aviator Instrument comes in, this akimbo quality is enhanced by making the top chrono pusher a different hue: the white-dialed version has a blue pusher to match the hands and numbers, while the dark gray option features a red pusher to match the hands on the subdials. The asymmetry here works because it isn’t random: every asymmetrical element has an echo somewhere on the watch, either in surface treatment or color – just not where you’d expect. To my mind, that is a very sophisticated aesthetic approach, and a fairly bold and edgy one, making the Vulcain Aviator Instrument stand out among the fleet of more conventional pilot watches available. 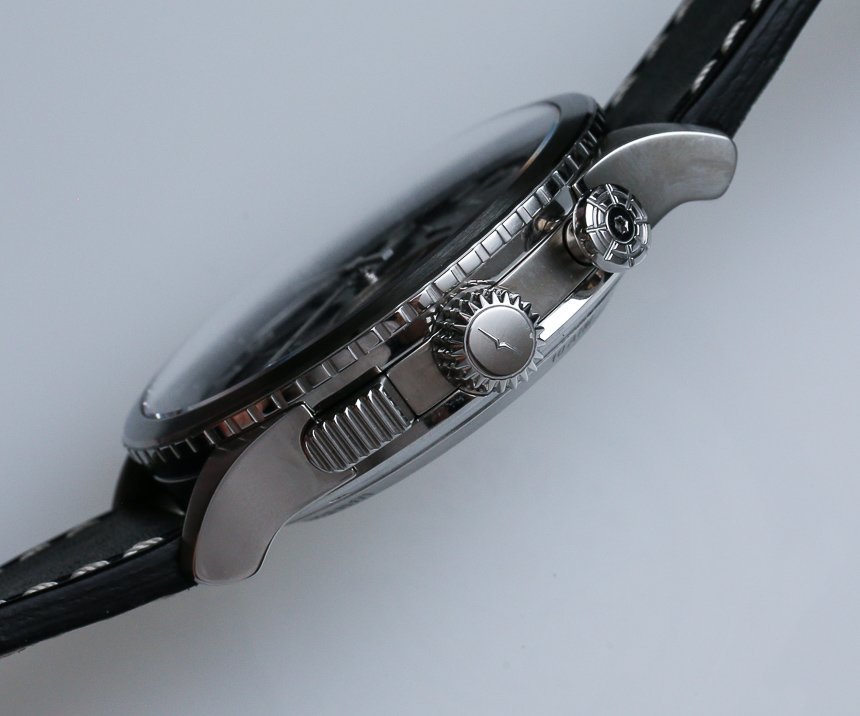