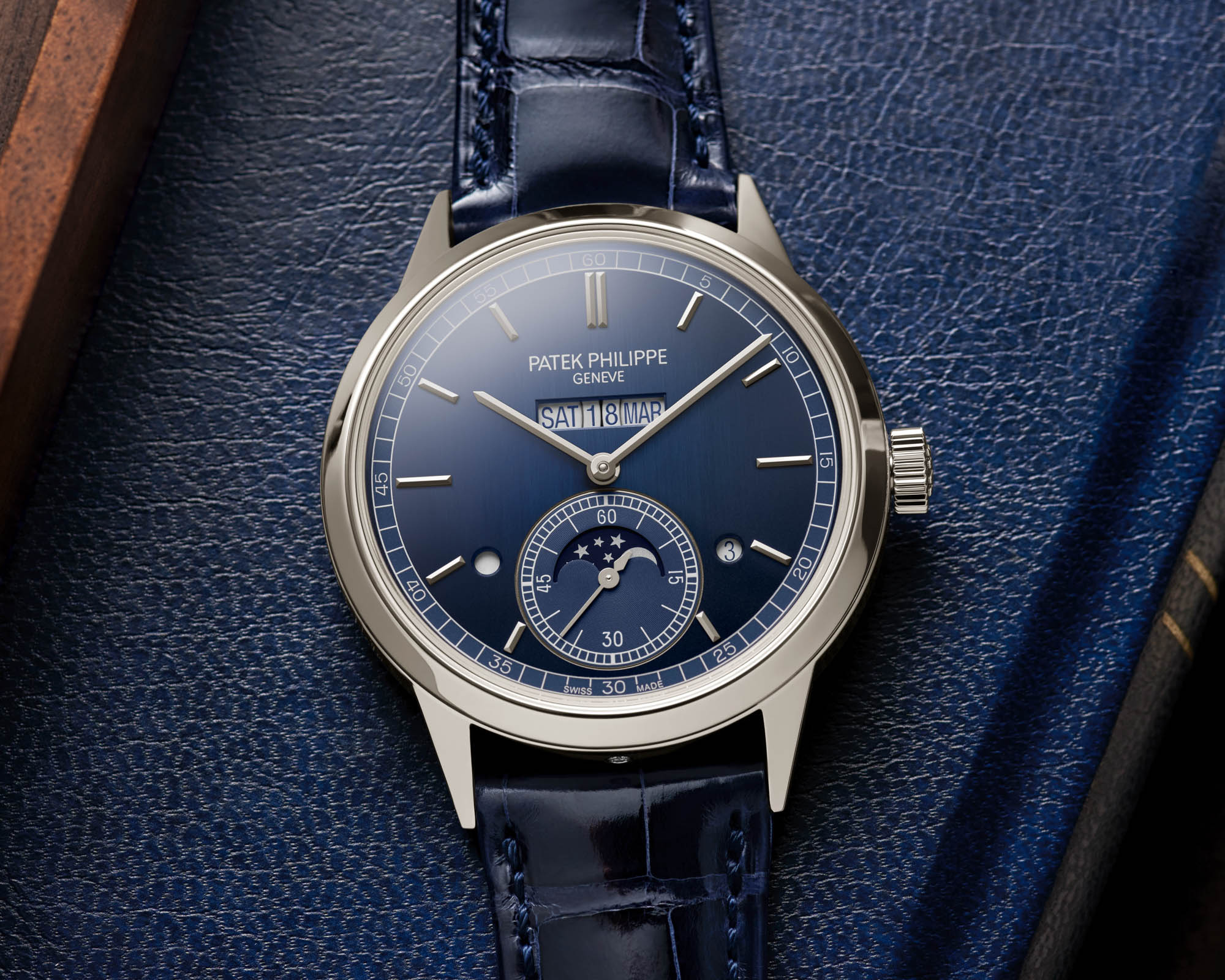 Patek Philippe 5236P In-Line Perpetual Calendar? Just by that name it sounds like one of the most spectacular calendar watches from the company and the end result stays in line (ha!) with that. Patek Philippe has largely rearranged the dial layout of its famed perpetual calendar complication characterized by the two round apertures at four and eight o’clock on the dial, dripped some Patek vintage flair on top, and has put it on sale for a hefty $130,108. 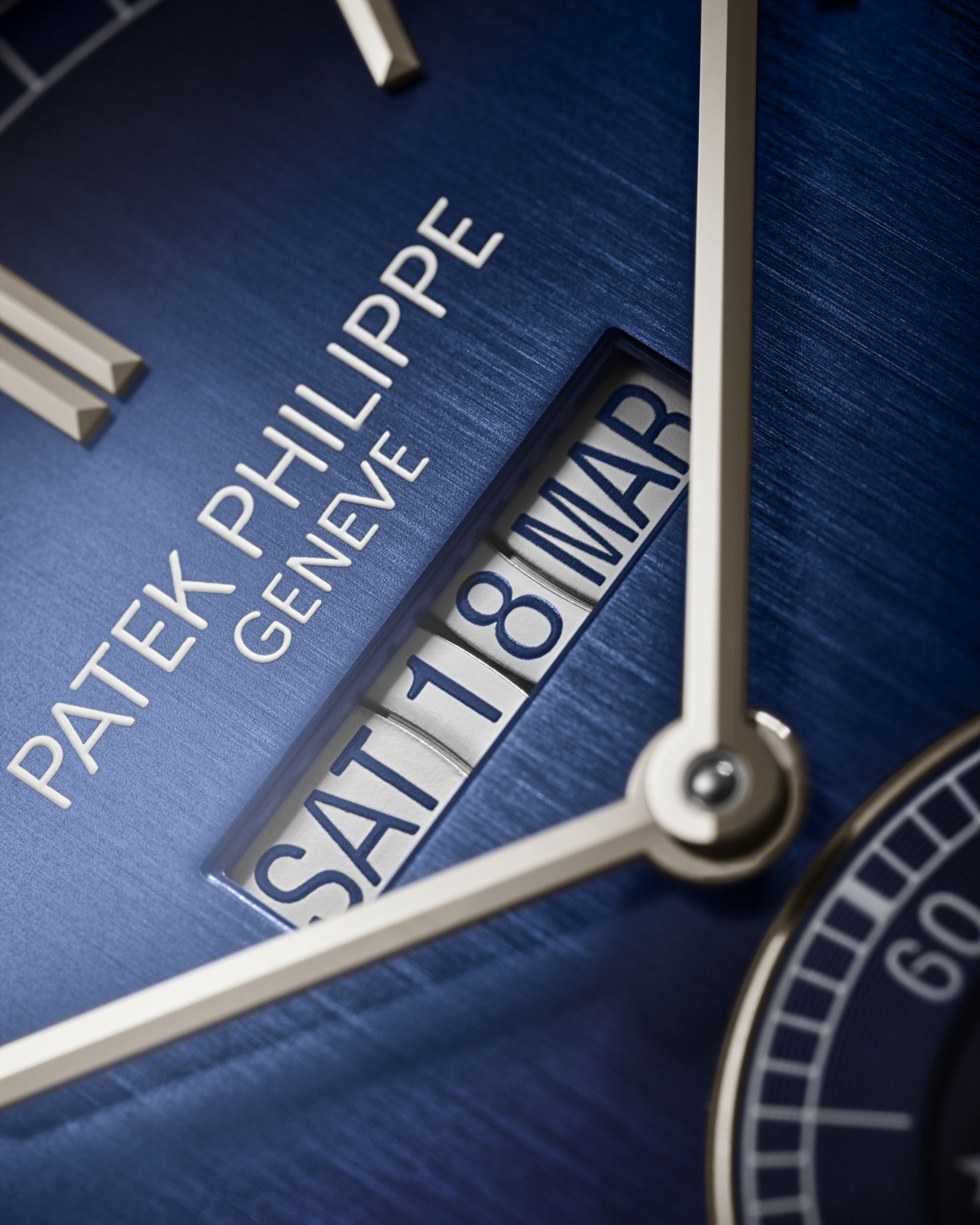 Patek Philippe has developed a new perpetual calendar module from scratch and placed it over the 31-260 caliber. Cutting to the chase, the single-line calendar display is what the brand is most proud of, with its four rotating disks, minimal energy consumption, and “superb reliability.” 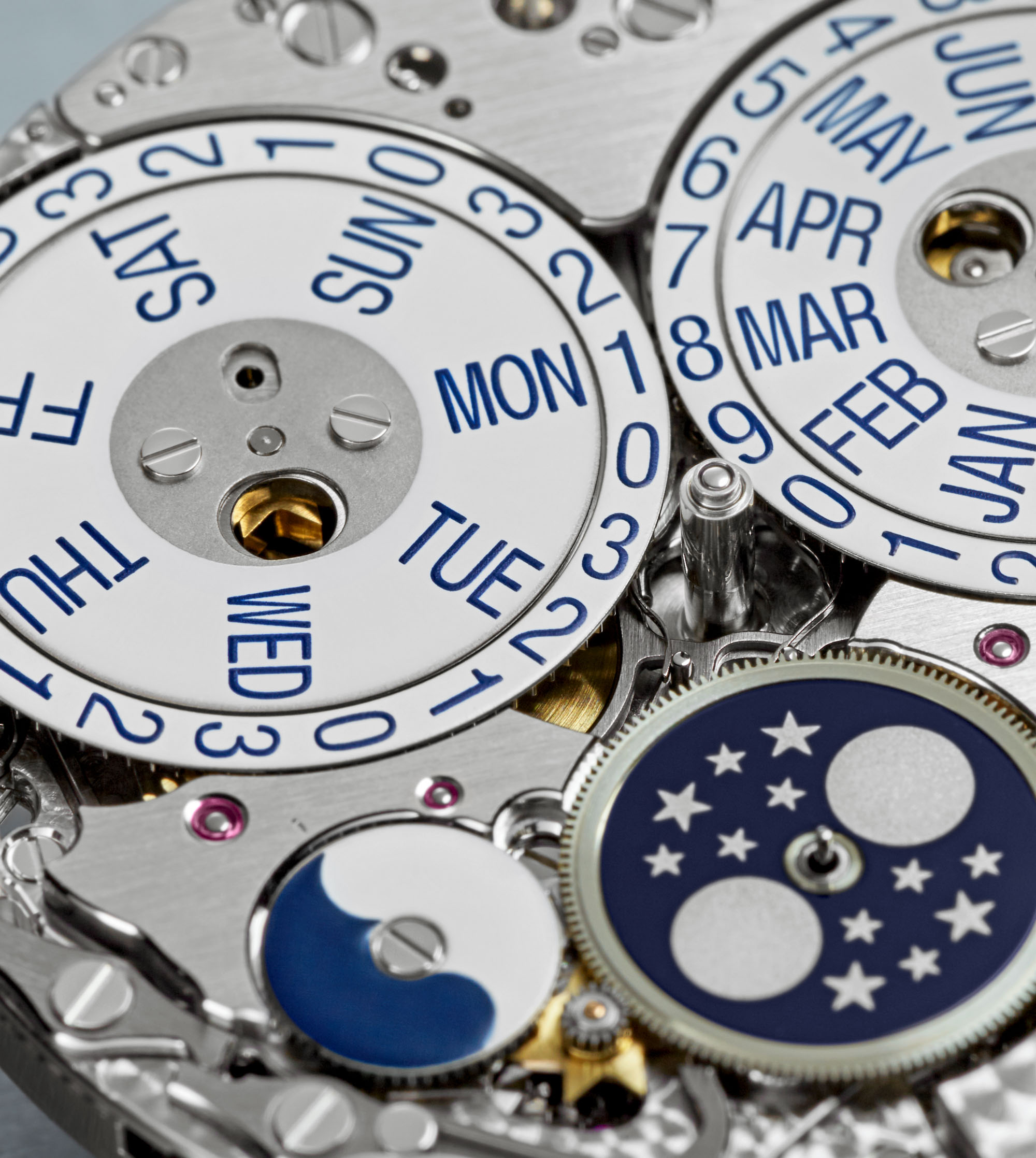 …Including several bridges and wheels with jewel bearings that reduce energy consumption, especially of the two date disks. To keep all the indications on one plane without any overlap, Patek Philippe’s engineers developed a display system composed of two coplanar double ball bearings for which a patent application has been filed. Patek Philippe explains: “The dependable date display and the perfect synchrony of the two date disks are optimized with an »anti-double-jump« feature, the second patent, for the units disk to prevent disk bounce in the event of a jolt or when a date correction is being performed. The transition from the 31st day to the 1st day of the next month is the subject of the third patent application for a mechanism that immobilizes the units disk. This is done with a 31-point date star from which two teeth were removed.” 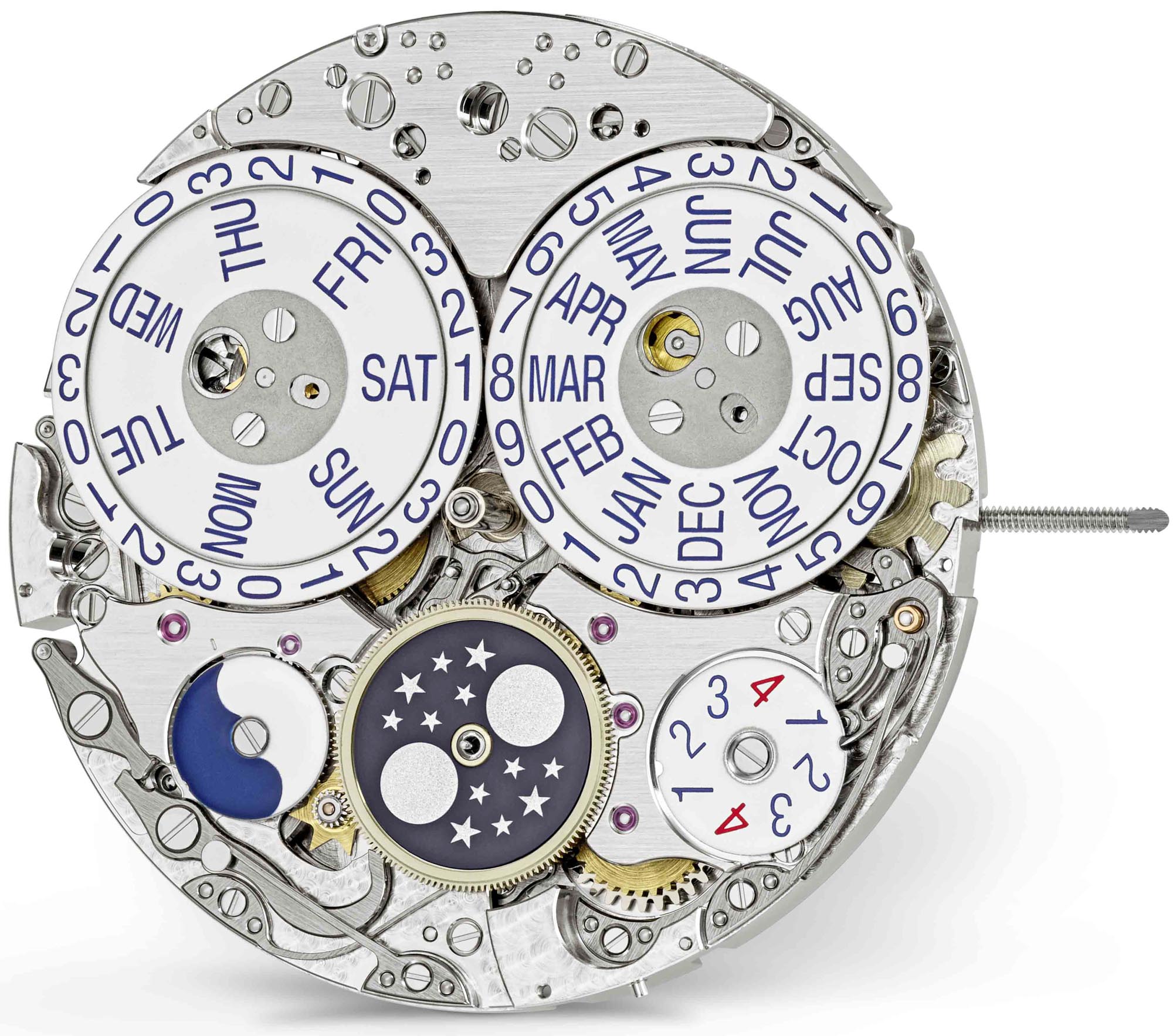 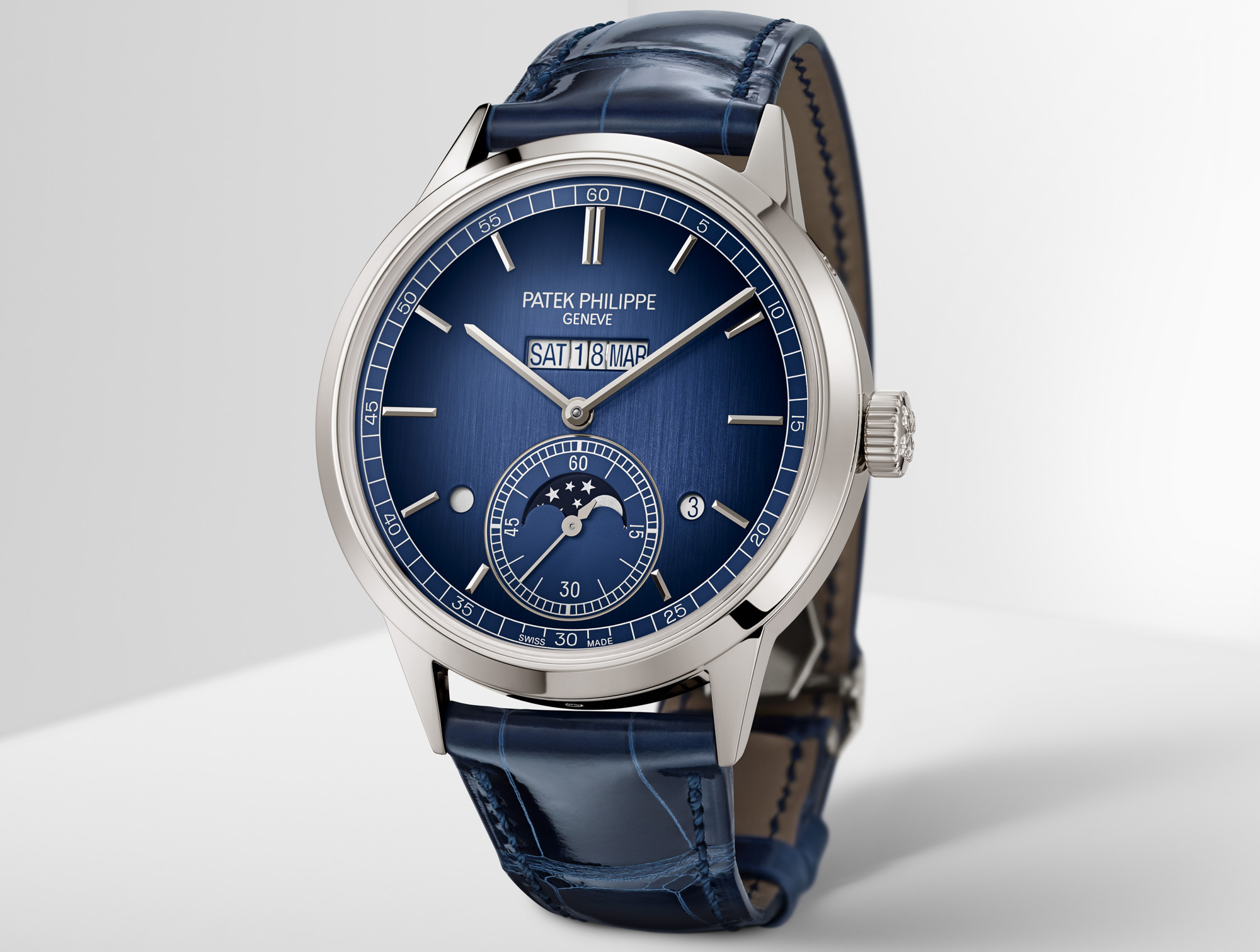 The result of all this engineering effort? It is an elegant row of indications above the centre of the dial, where the name of the day is followed by the date, followed by the name of the month. Patek Philippe has debuted something like this in 1972 with the P-1450 pocket watch, an achingly beautiful piece. Real-world legibility remains to be seen once we encounter the new Patek Philippe 5236P In-Line Perpetual Calendar in the wild – judging from official images it could be argued that if you struggle with hypermetropia, you’ll probably need your reading glasses to make these out. And if its optimum legibility you are after in a Patek Philippe perpetual calendar, you’ll be better off with something like a ref. 3940. Still, this is more of an exercise in neatly and elegantly laying out the perpetual calendar’s key indications in a row, as opposed to something that one could argue is bringing perpetual calendar legibility to new levels. To facilitate the adjustment of the functions, three correctors – for the day, the date, and the month – are recessed in the case flank between 9 and 2 o’clock, in the same order as the respective displays, while the moon phase corrector is positioned at 8 o’clock. 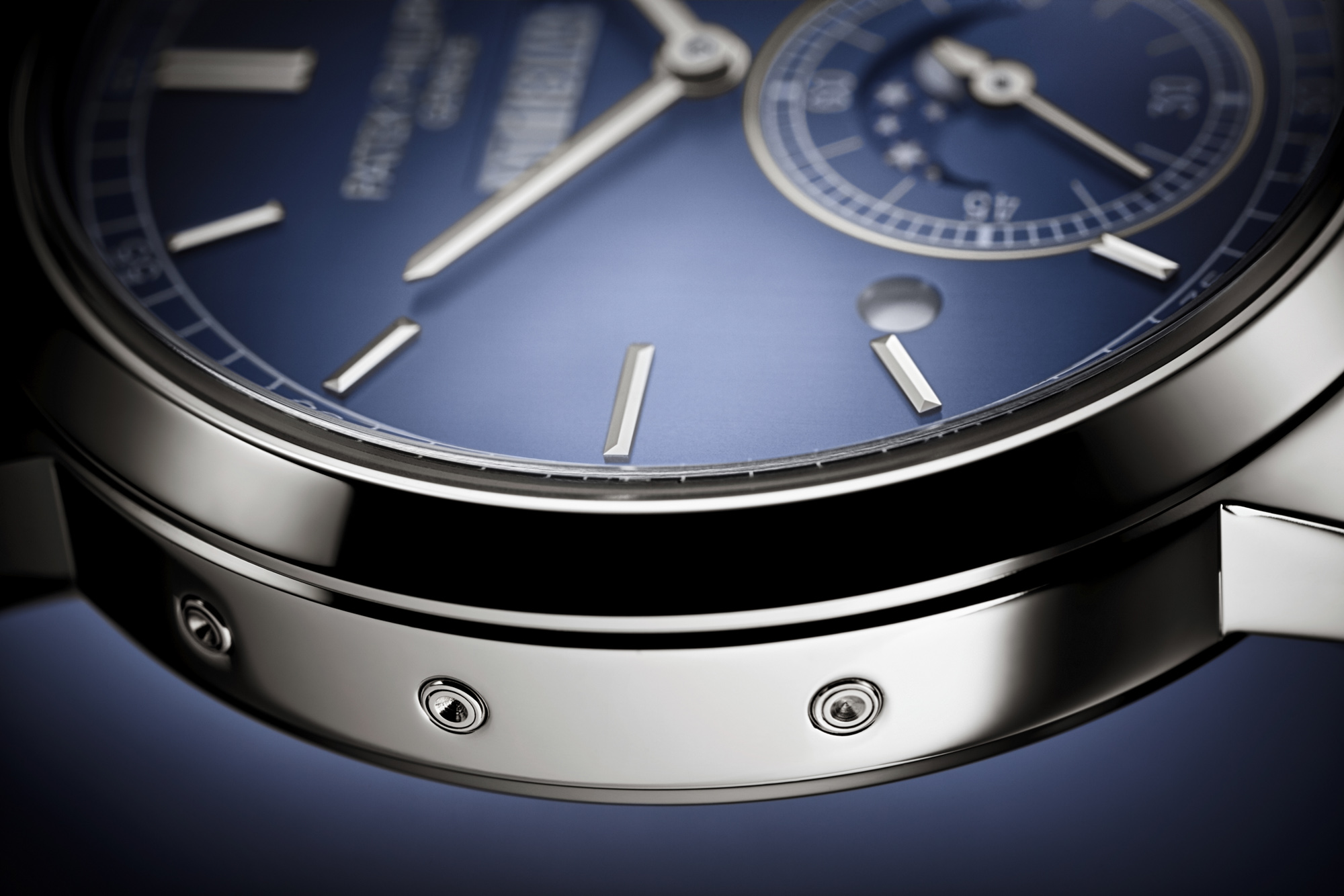 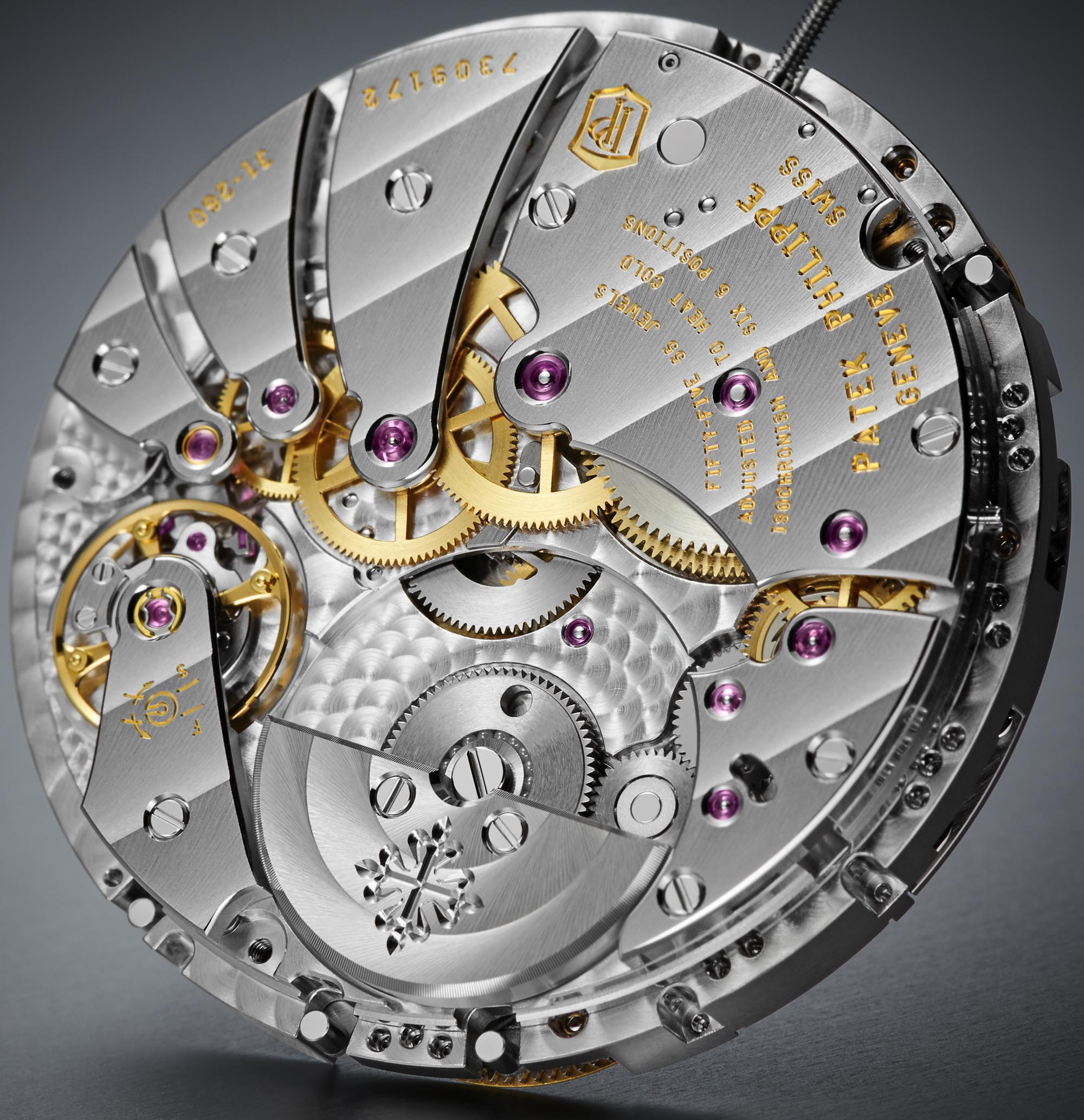 Serving as the base for the Patek Philippe 5236P In-Line Perpetual Calendar is the spectacular 31-260 caliber, equipped with a platinum mini-rotor (as Patek calls it), 20% increased torque to power those novel indications, and to support an increase in operating frequency from 3.2 to 4 Hertz (28,8000 semi-oscillations per hour). This, Patek says, “also simplifies precision adjustments to the rate tolerance specified by the Patek Philippe Seal,” which is basically Patek saying “we made it easier for ourself to regulate our own watches, thank you very much.” But there’s nothing wrong with that, especially since further complexities have been introduced elsewhere. 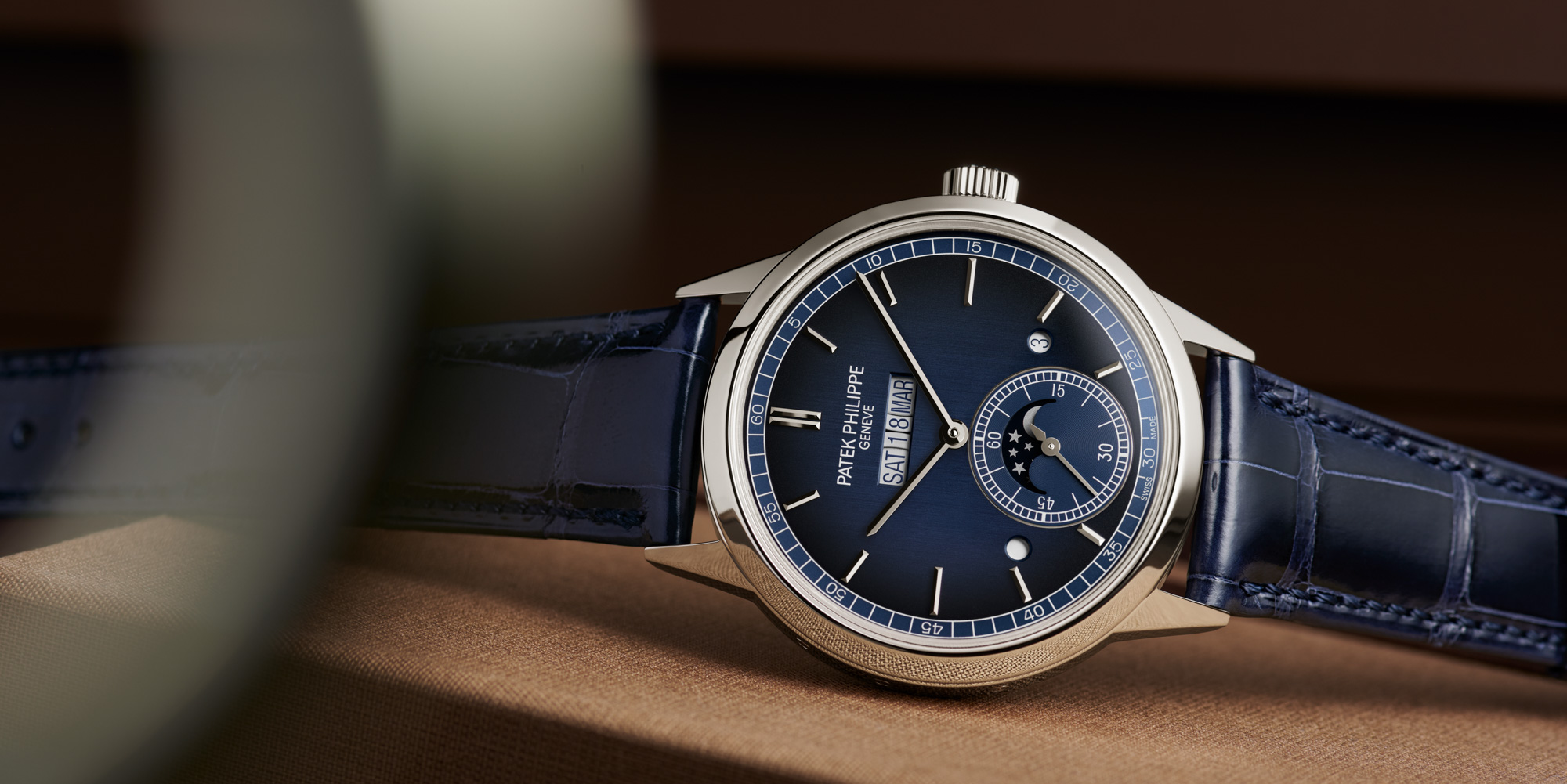 The horological nerd-fest continues: the caliber 31-260 PS QL is fitted with a reduction wheel that uncouples the automatic winder as soon as the movement is being manually wound – a Patek Philippe invention patented in 2019 that reduces wear. “The aesthetic appeal of the movement is subtly evolved with two distinctive bridges for the escapement and the fourth wheel. Their configuration made the work of the engineers more difficult but it affords a better view of the basic movement’s wheel train, overall architecture, and refined finissage as revealed by the sapphire-crystal caseback. This back can be substituted with a solid platinum back that is delivered with the watch.” That extra platinum case back thrown in there brings with it a solid old-school Patek Philippe charm that is just great to see. I don’t know about you, but I would be mighty tempted to rock this one on the 950pt platinum case back. 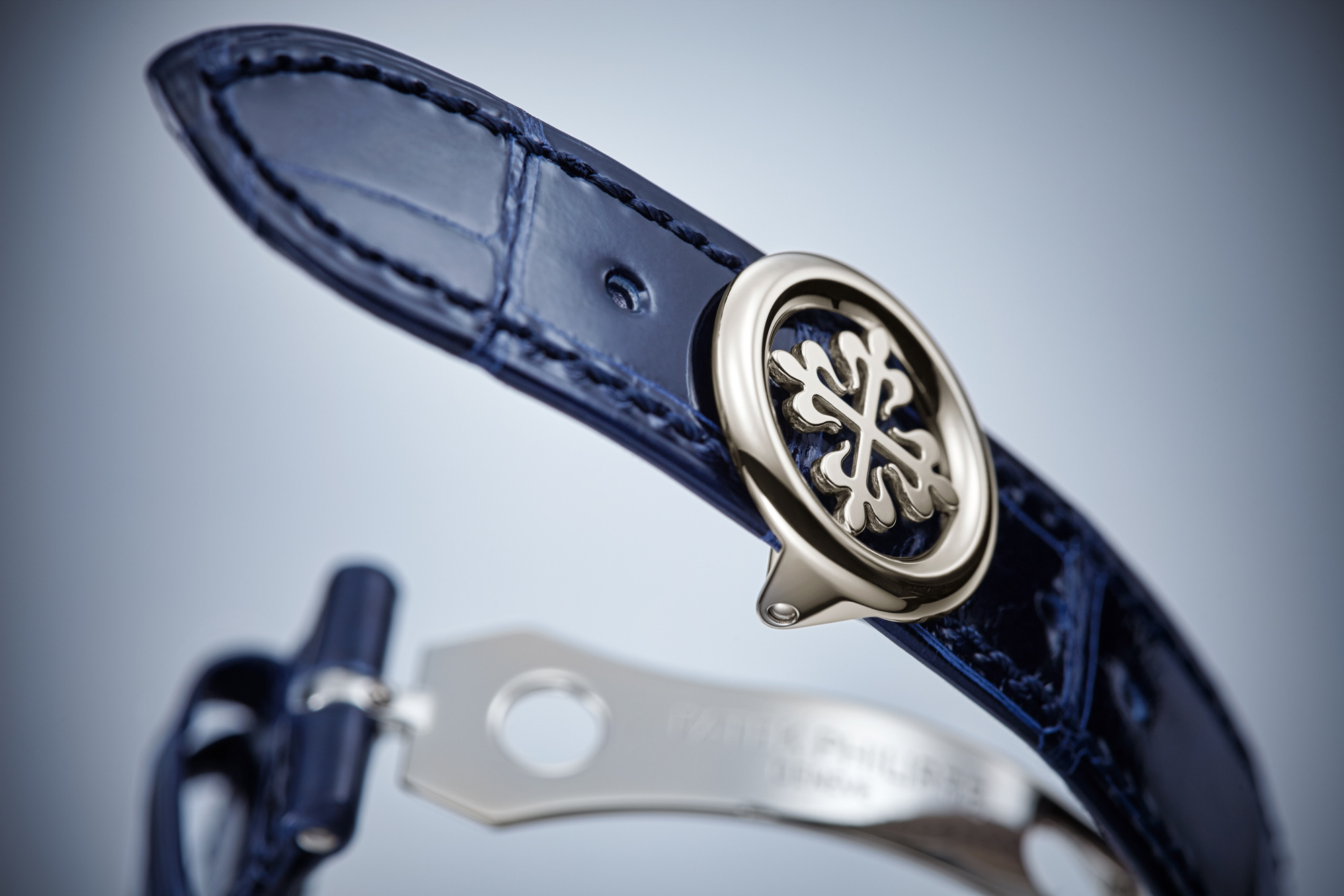 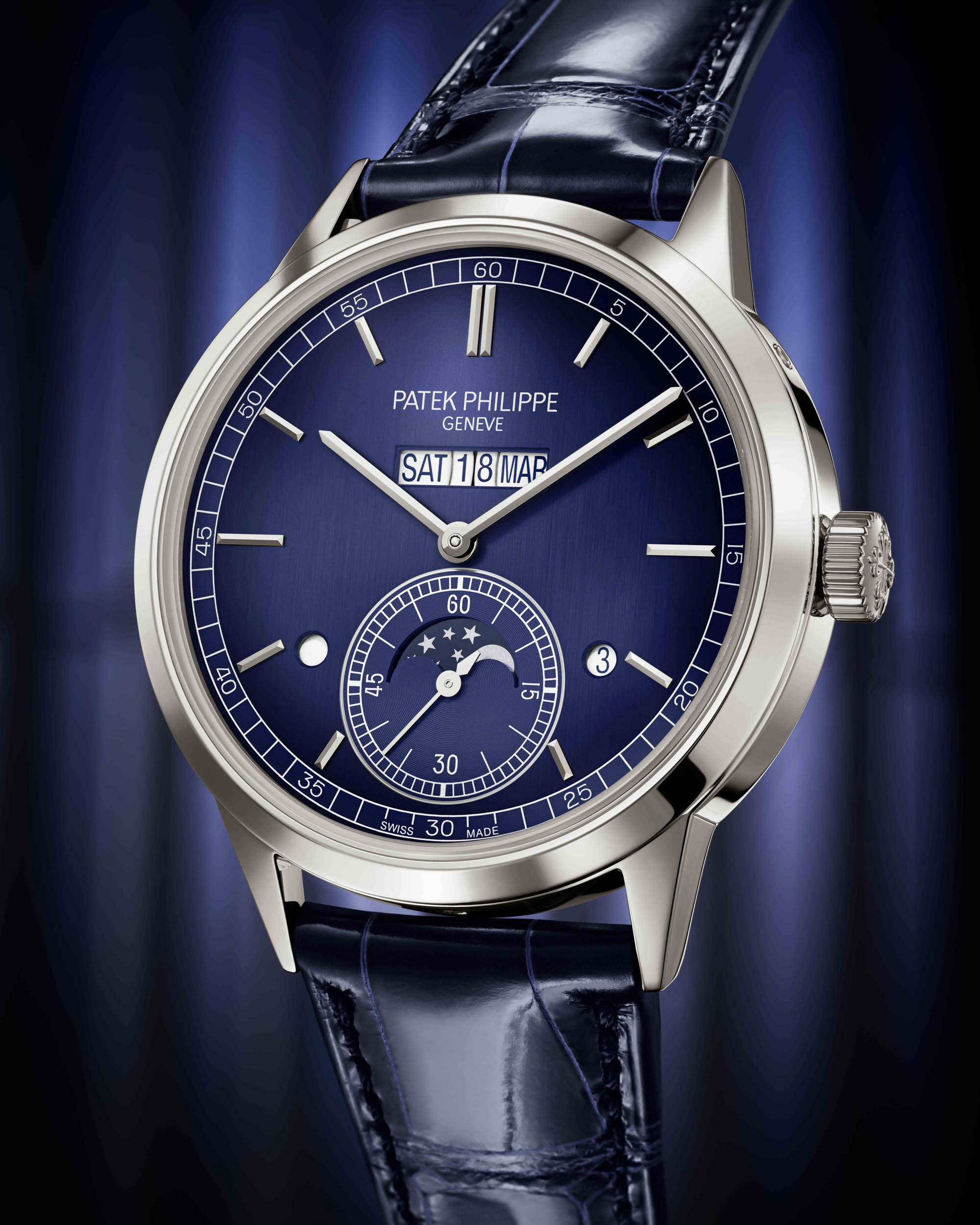 While new versions are certain to be revealed over the next number of years, the Patek Philippe 5236P In-Line Perpetual Calendar debuts exclusively in platinum (as the “P” in its reference number suggests) with a blue dial. The case is 41.3mm in diameter, measures 48.61mm lug-to-lug (kudos to Patek for providing this measurement) and is 11.07mm thick. The brass dial is lacquered in blue with a black gradation which is all the rage these days. The strap is hand-stitched alligator in “shiny navy blue” matched to a fold-over clasp in, you guessed it, 950 platinum.

Price for the Patek Philippe 5236P In-Line Perpetual Calendar is $130,108. You can learn more at the brand’s website.