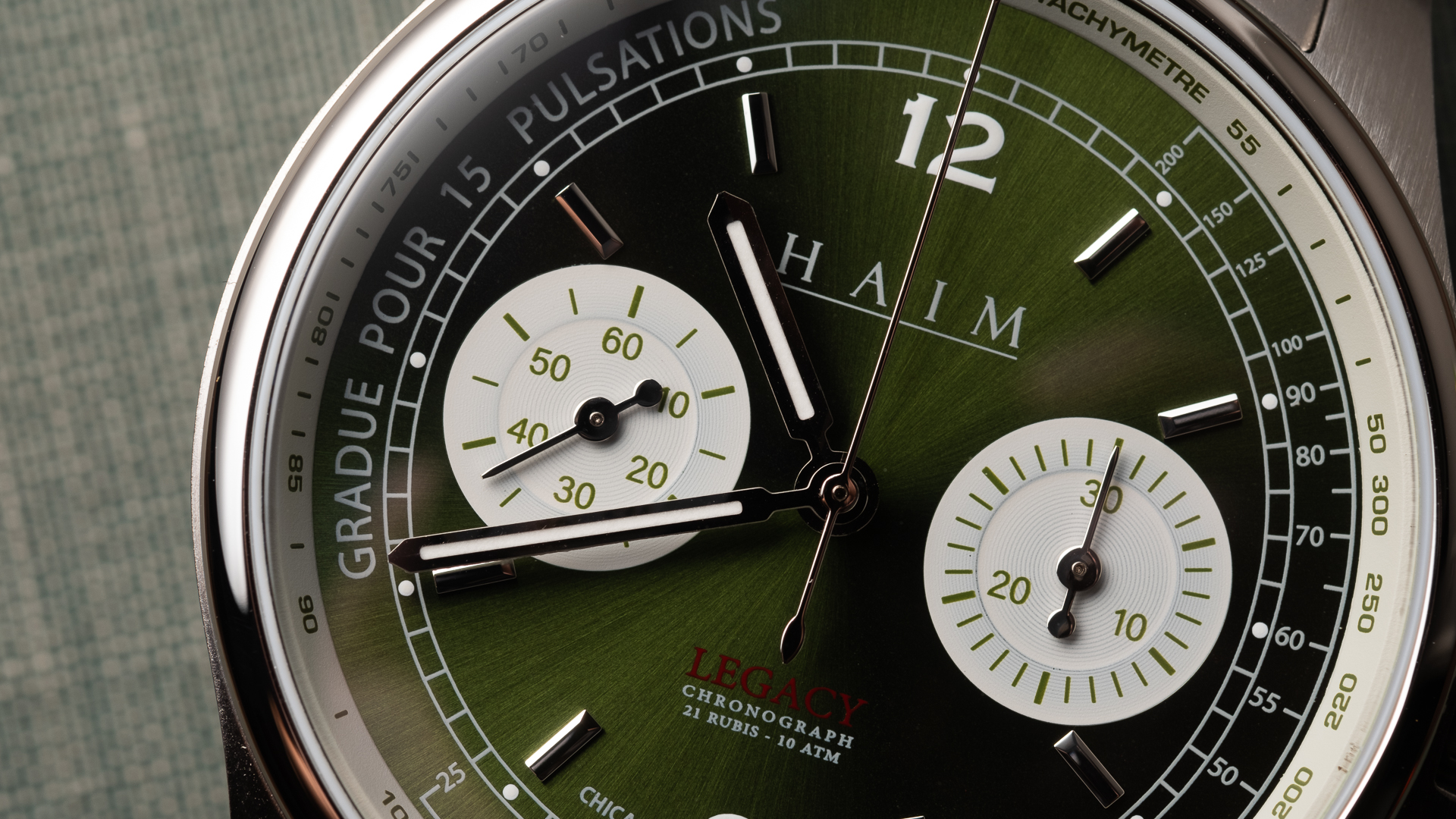 You can imagine my surprise when I found out that the HAIM watch I was being offered to review had nothing to do with the all-woman rock and roll band from a few years back. In all seriousness, though, HAIM is a new brand to me and a new one to the market at large. It released its first and currently only offering back in September of 2020. The HAIM Legacy Chronograph is a vintage-inspired bi-compax watch. The question, however, is: In a market in which the “vintage-inspired” moniker is becoming increasingly commonplace, will a newcomer like HAIM be able to carve out its own little piece of the pie? We shall see.

That said, the HAIM Legacy Chronograph was born out of classic aesthetic. It is a simple two-subdial chronograph featuring both a tachymeter and pulsometer scale on the dial. This alludes to the ways watches were put to use in years prior. Doctors, pilots, race car drivers, and everyone in between used a wristwatch as an integral part of their gear. The inclusion of both on one watch is an unusual choice, in my opinion. Someone might argue that more functionality is better. I’ll leave that up to the reader. 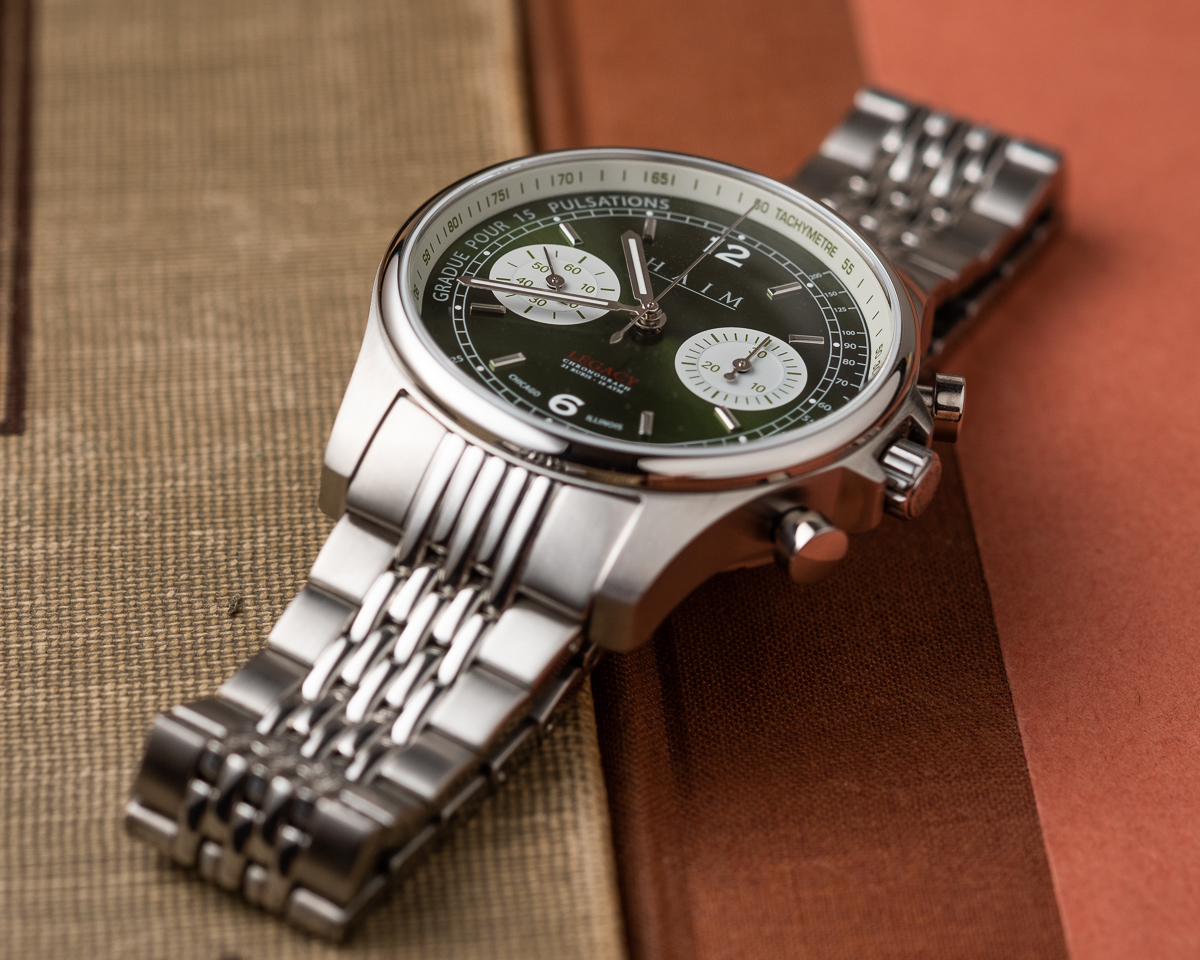 The 39.5mm case is made from 316L Marine Grade Stainless steel. HAIM has opted for a brushed finish throughout with the notable exception of a thin polished bezel that surrounds the crystal. Normally at this price point, I expect to see some soft transitions from edge to edge. HAIM somehow has managed to keep the edges of the Legacy Chronograph crispy. The top of the lug drops off to the side of the case in a nice sharp edge.

The caseback of the Legacy boasts a sapphire display back so that you can view the movement ticking away. We’ll get into specifics on the movement later, but it’s worth pointing out that this is a nice touch. This is a good movement to be able to see.

The Legacy does have one fatal flaw, however. The case has two abrupt crown guards hugging the roughly 5mm crown. The trouble with that is that you need to wind this watch with the crown in position 0, or pressed all the way in. The crown guards make it almost impossible to get a solid grip on the crown itself. So what you end up doing is winding this watch in a series of quarter turns, at most. This takes winding a watch, which can be a pleasurable experience, and turns it into a real chore. In my eyes, the inclusion of crown guards on a piece like the Legacy Chronograph speaks to this watch’s confused identity. 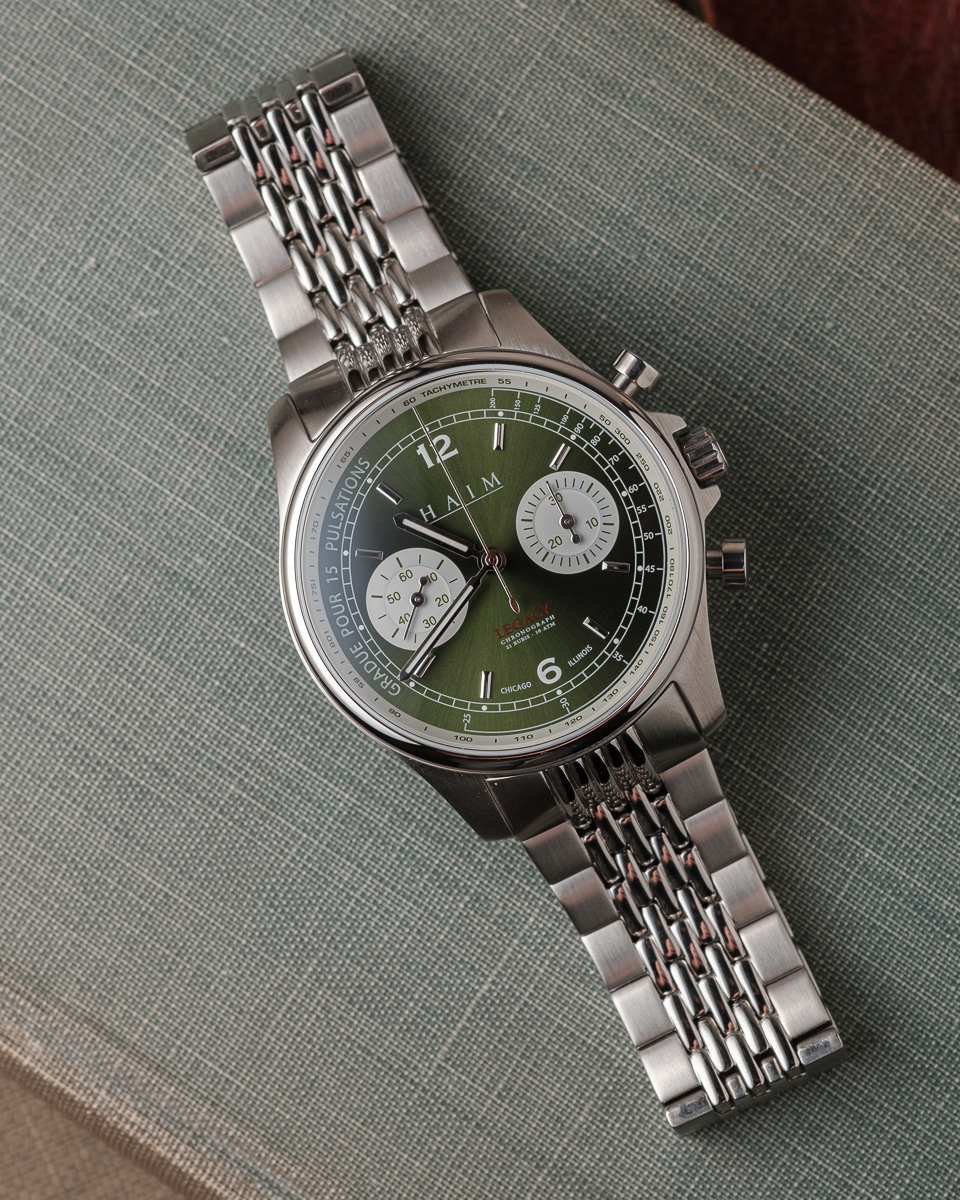 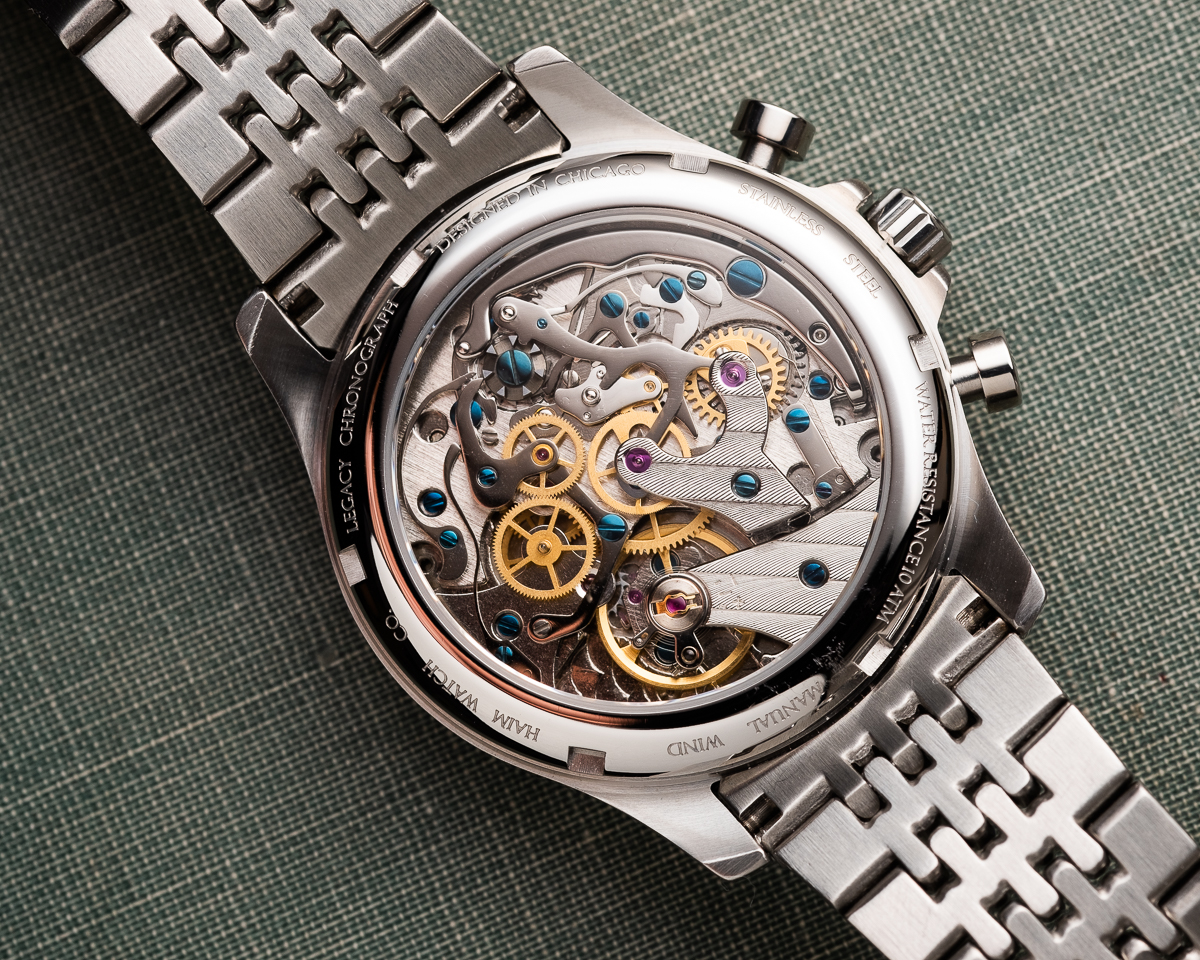 There’s a fundamental flaw in the design of this watch. A hand-wound movement paired with the case as designed simply doesn’t work. Removing the crown guards would be one solution. The other would be incorporating an automatic movement. Although, if you ask me, the crown guards are a bit superfluous and the watch would be cleaner overall without them. Moving beyond all of this, we’re left with the actual movement choice. The Seagull ST1901 is a hand-wound 21-jewel movement beating at 3hz. The level of finishing on these movements is pretty incredible for what the HAIM watches cost. The brand’s decision to include the sapphire display back is smart, as this movement looks good and it’d be a shame to not see it. 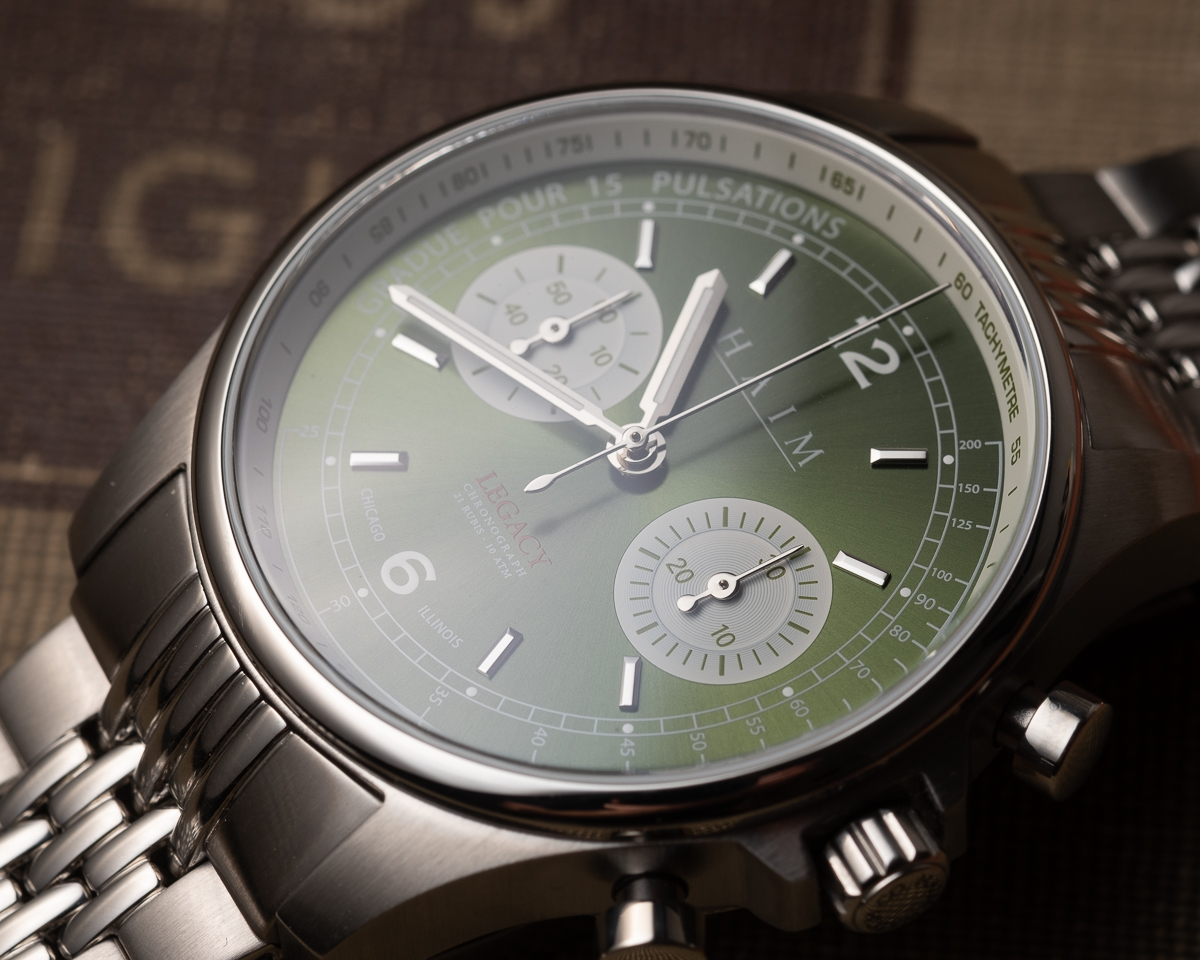 The Legacy Chronograph’s dial comes in two varieties, the first being a green sunburst with white subdials, the second, a lighter blue with dark navy subdials. They both have a nice vintage vibe about them. The indices that are not on the quarter-hour are applied and catch the light nicely as the watch moves. The 12 and 6 o’clock indices are printed on the dial. These both come off a little flat to the eye in contrast to the others. It’s worth pointing out, however, that both numerals are lumed. HAIM opted for a vaguely sword-shaped silver handset on the Legacy. These look great and are nicely contrasted against the green dial. Overall, it’s a nicely done chronograph dial. 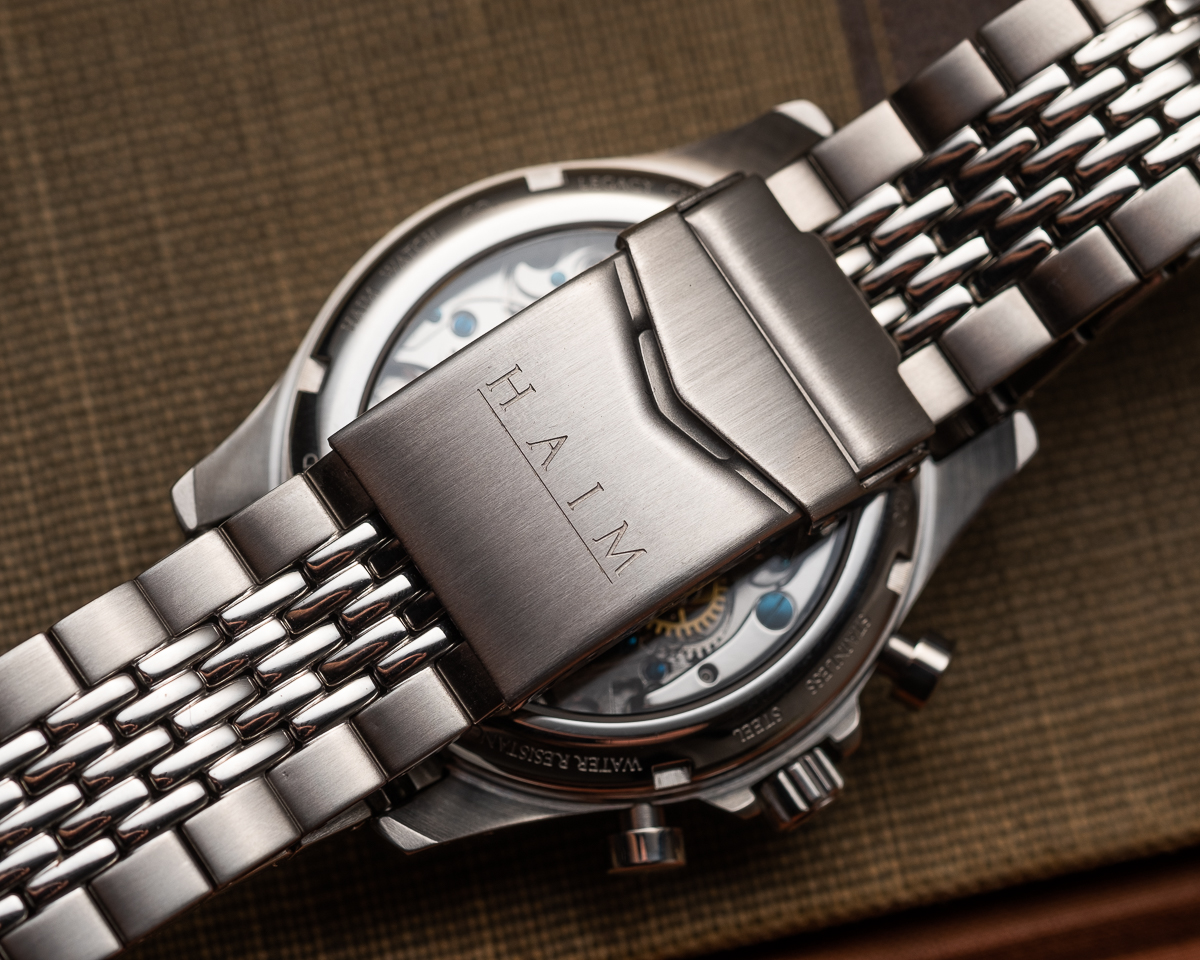 HAIM has paired the Legacy with a beads-of-rice style bracelet. The bracelet itself looks really sharp. You have a brushed outer link and polished inner “rice” links. There’s a decent amount of movement in the links themselves, and this gives the bracelet a nice drape over your wrist. HAIM also incorporated four micro-adjustment points on the foldover clasp, so you’ll really be able to dial in fit here. I wouldn’t say there are any keystone features or standout details on the bracelet, but it is acceptable on a watch at this price point. 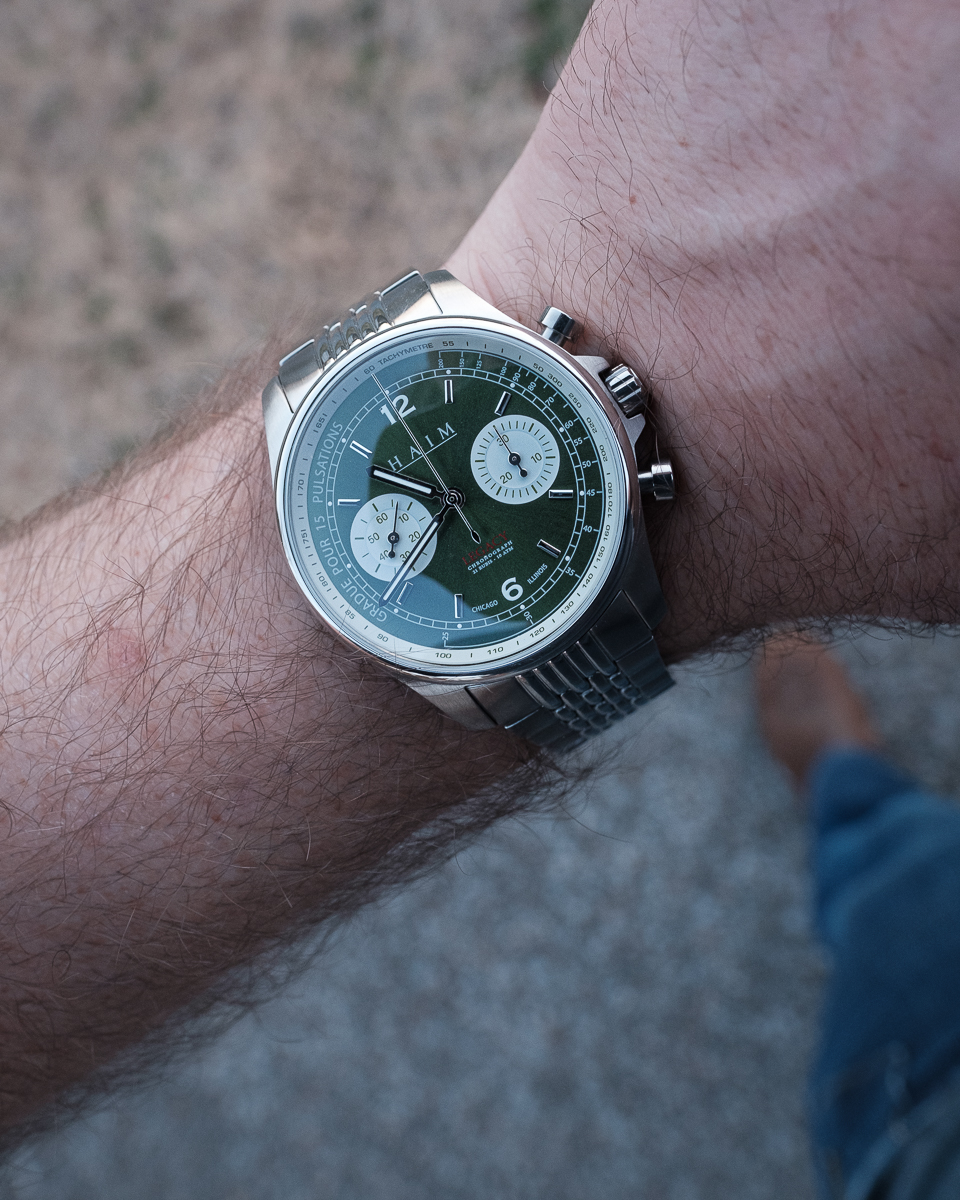 When it comes to fit, the HAIM is very nicely sized to sit on a wrist. 39mm is right in my sweet spot for a comfortable timepiece. The lug to lug sits right at 47.2mm and wraps around your wrist nicely. The bracelet can tend to pull some arm hair, of which I have an abundance; your mileage may vary.

I personally think this watch would sing on a leather strap or maybe a NATO strap. It would be a shame to cover the display back, though. 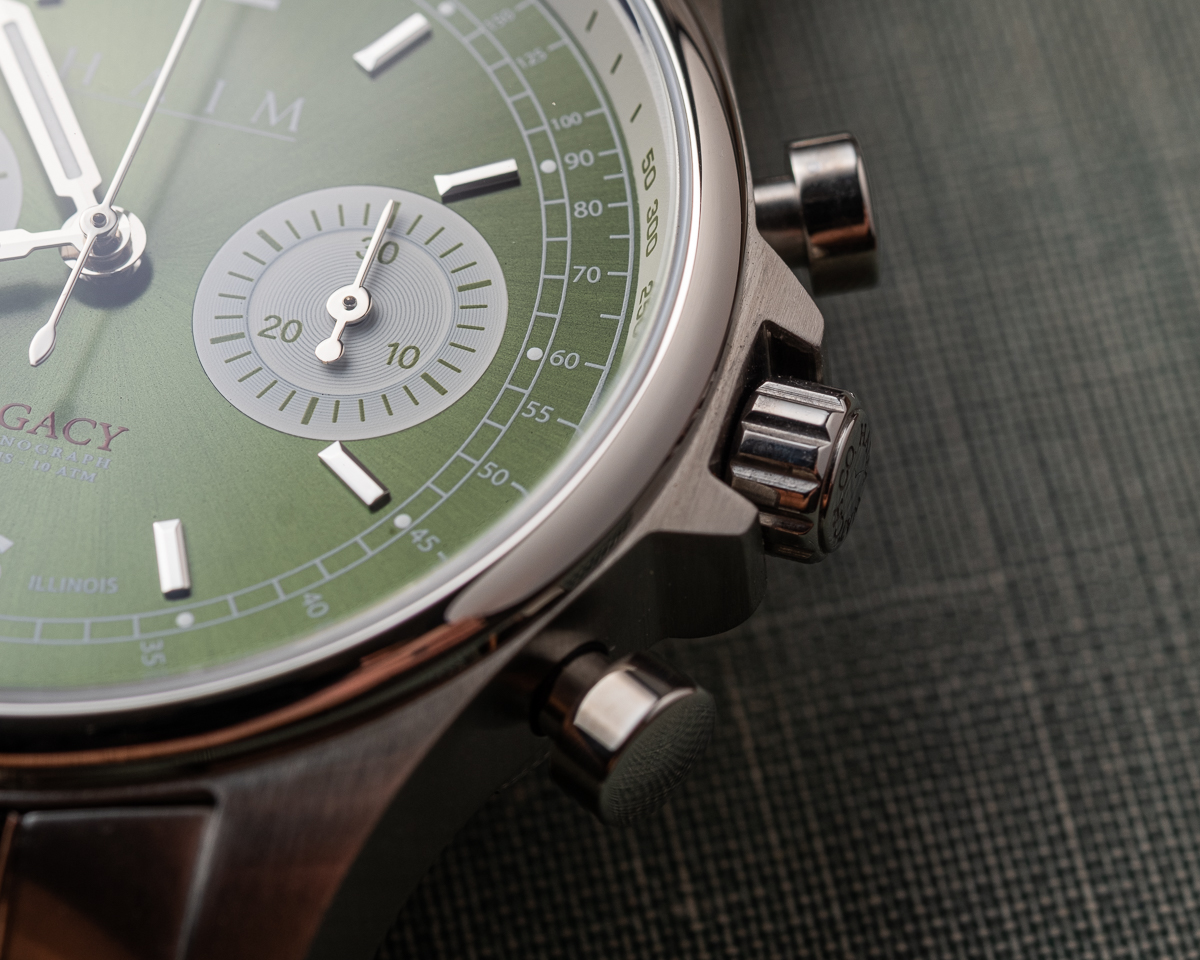 So, competitive options are tricky with this one. On one hand, the Legacy Chronograph is priced extremely well for what you get.

The first and most obvious competitor to the Legacy might be the Seagull 1963 Chronograph — maybe specifically the green edition. These watches run a bit less than the Legacy, use the same movement, and will have the same “feeling” as the more expensive watch. This will just be a value/aesthetic decision on your part.

If you’re willing to drop a little more cash, I might point you in the direction of the Farer Mechaquartz line. Now, I know, these are quartz watches for $120 more than you’re paying for a mechanical. It’s just something worth checking out if you’re in the market. Although, if you want my advice, I would point you in the direction of the Lorier Gemini — same movement, same price. The Gemini, however, has a much better sense of what it’s trying to be as a watch.

I think HAIM has some decent bones to make an exciting independent watch brand. The Legacy Chronograph, however, is a confusing piece in the collection. Between the mixed scales on the dial and the inclusion of crown guards at the expense of functionality, it’s clear that some aspects weren’t fully considered here. I can’t help but feel that one or two quick spins past the drawing board might have fixed these and made this a really nice piece to wear. I would even be able to excuse some of the design anachronisms if it weren’t for the functional flaws. A watch with a hand-wound movement should be easy to wind; if that is not achieved, it becomes a design-breaking flaw, in my opinion. The HAIM Legacy Chronograph is available in two colorways: the Reverse Hunter, pictured here, and the Sky Panda. Each colorway will be limited to editions of 150 pieces and available for $499.99. For more information, visit haimwatchco.com.

Necessary Data
>Brand: HAIM
>Model: Legacy Chronograph
>Price: $499
>Size: 39.5mm
>Would the reviewer personally wear it: I would not.
>Friend we’d recommend it to first: Honestly, before I would recommend that someone make a purchasing decision on this watch, I’d want the see a design revision.
>Best characteristic of watch: Being able to see the nicely decorated Seagull movement.
>Worst characteristic of watch: CROWN GUARDS!!