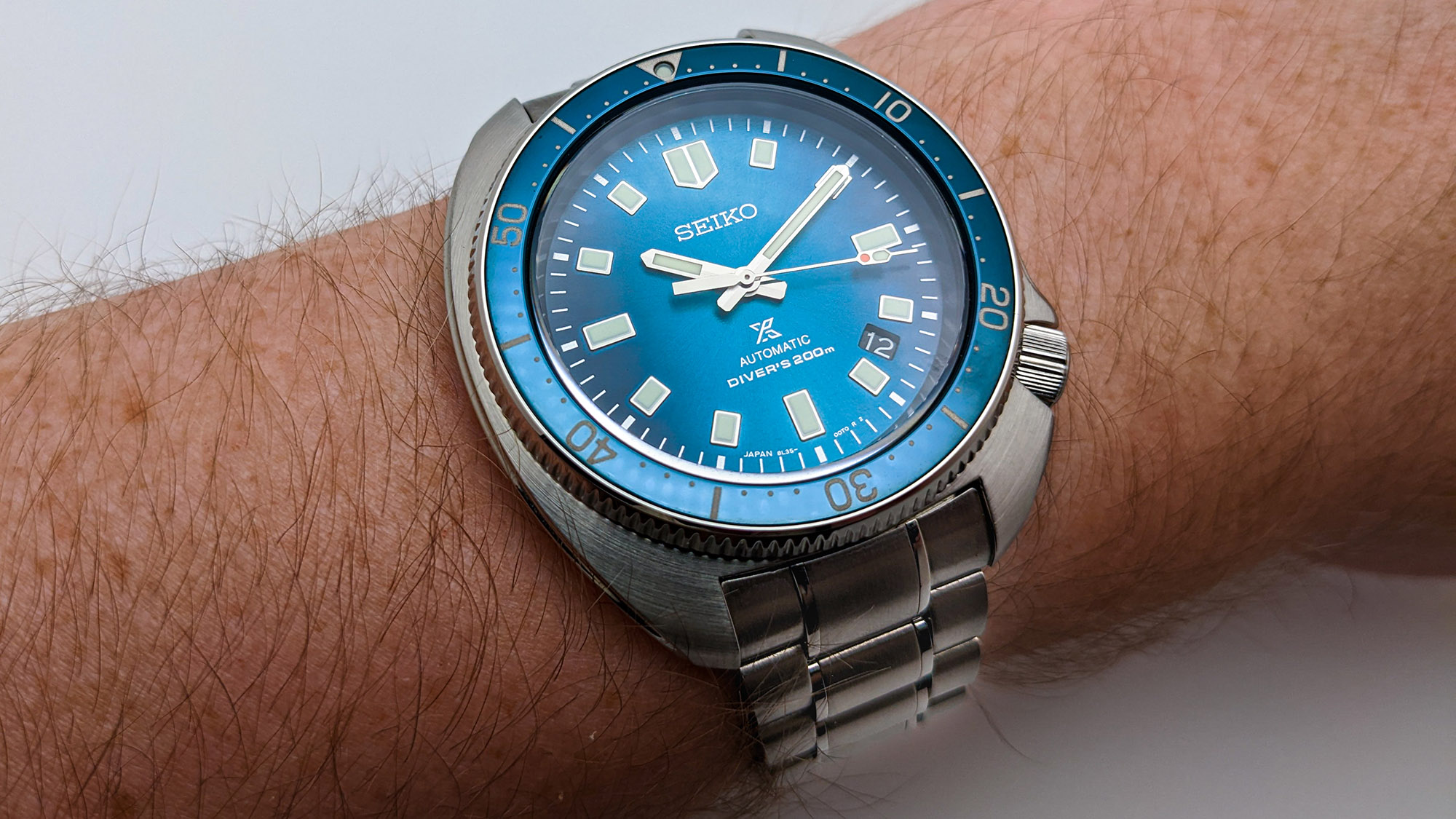 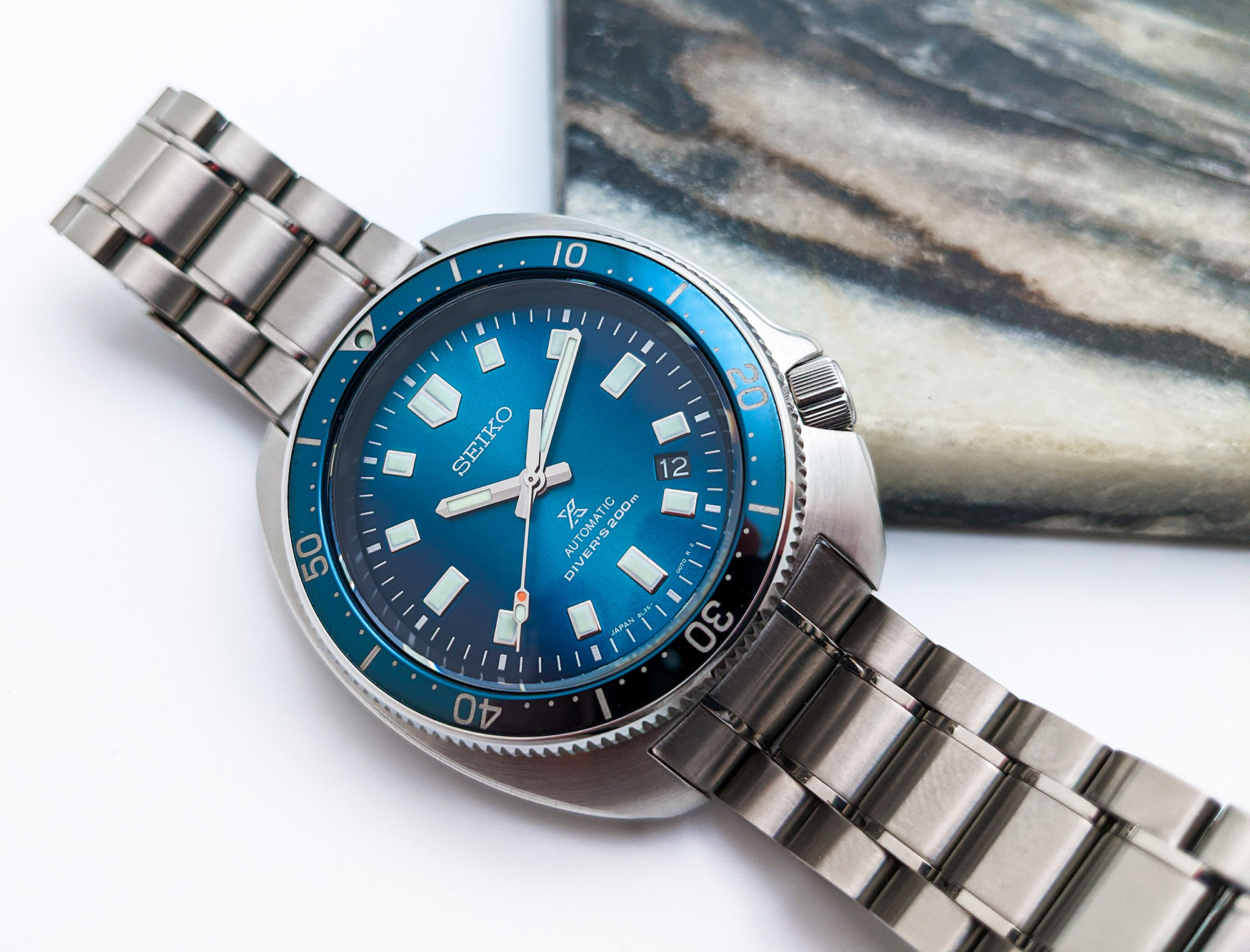 The past few years have been a transitional time for Seiko. Although the Japanese giant has long boasted a scope that runs from ultra-affordable entry-level models to truly world-beating examples of haute horlogerie (especially through its Grand Seiko and Credor sub-brands), the company has recently made sizeable efforts to move the main Seiko brand upmarket. This trend of higher quality models for higher prices, coupled with aggressive moves at the entry-level price point by competitors, has put Seiko in an interesting, rather unprecedented situation among enthusiasts. While for years, the Seiko name was virtually the default choice for value-focused watch enthusiasts, nowadays, many parts of the Seiko lineup are competing directly against Swiss and fellow Japanese brands at the same price point. Seiko, then, faces the challenge of beating these competitors purely on quality. The limited-edition Seiko Prospex SLA063 is an excellent microcosm of the current state of the brand – excepting Prospex LX offerings and a handful of specialty models, this sits near the top of the pricing scale for three-hand divers under the main Seiko nameplate, but despite the more ambitious price point, this model stacks up admirably against its celebrated Swiss competitors. Inspired by the ethereal glow of the Aurora Borealis, this new diver is an impressively refined and uniquely attractive offering that makes a compelling case for Seiko’s future in this market segment. 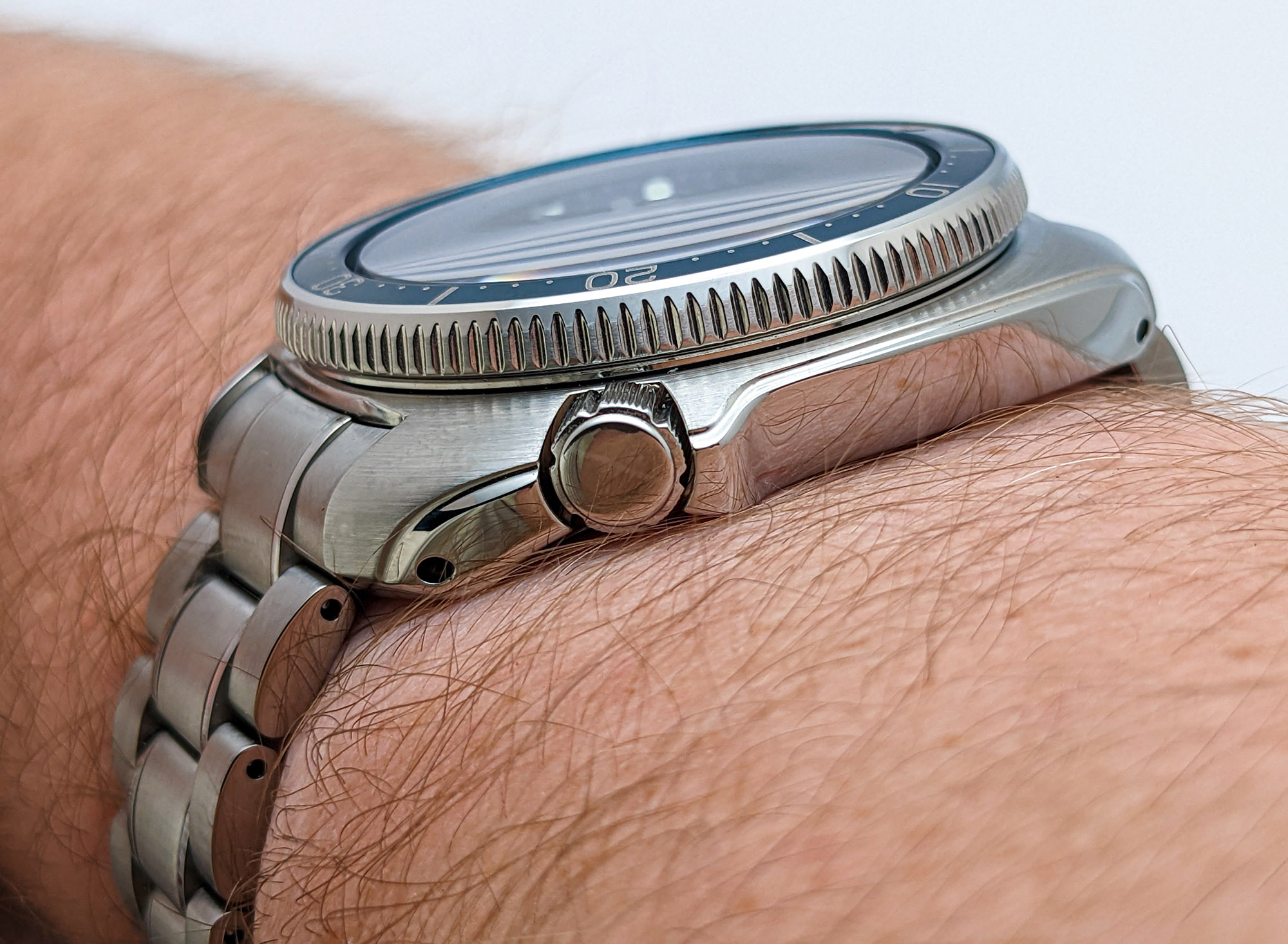 Measuring in at 44mm-wide and 13mm-thick, the stainless steel case of the Seiko Prospex SLA063 brings a newly luxurious feel to the classic ‘70s cushion case form. Although this design is largely true to the size and shape of the original Seiko 6105 “Willard,” the SLA063 distinguishes itself in the fine details. The subtlest of these ironically might have the largest impact on the overall wearing experience. Rather than the 6105’s abrupt transition between the radially brushed upper case and the inwardly sloping, polished case sides, the SLA063 adds a slim stepped chamfer along the edges of the case. Beyond simply creating a more complex form out of the rounded, pebble-like cushion design, this chamfer ensures that no matter what the viewing angle, this case has a brightly polished edge highlight for a brighter, more premium look on the wrist. This dedication to a more refined, nuanced wearing experience extends to the distinctive 4 o’clock crown as well. While more affordable modern interpretations of the 6105 opt for a simple coin edge screw-down crown design, the SLA063 stays visually true to the ‘70s original with a notched screw-down crown that mimics the pin-lock crown design of the classic model and gives the design a more distinctive look. Likewise, the unidirectional coin edge bezel adds some refinement to the original concept, with a glossy, almost mirror-like engraved insert in deep navy blue. The bezel itself sets itself apart by feel as well, thanks to a smooth, light turning action with a reassuring lack of back play. Seiko’s attention to detail shines through dramatically in the finishing itself, with even and precise brushing accented by spectacular case side polishing that markedly outshines its competitors at this price point (with that said, the brand makes no mention of its upscale Zaratsu polishing process on this model). 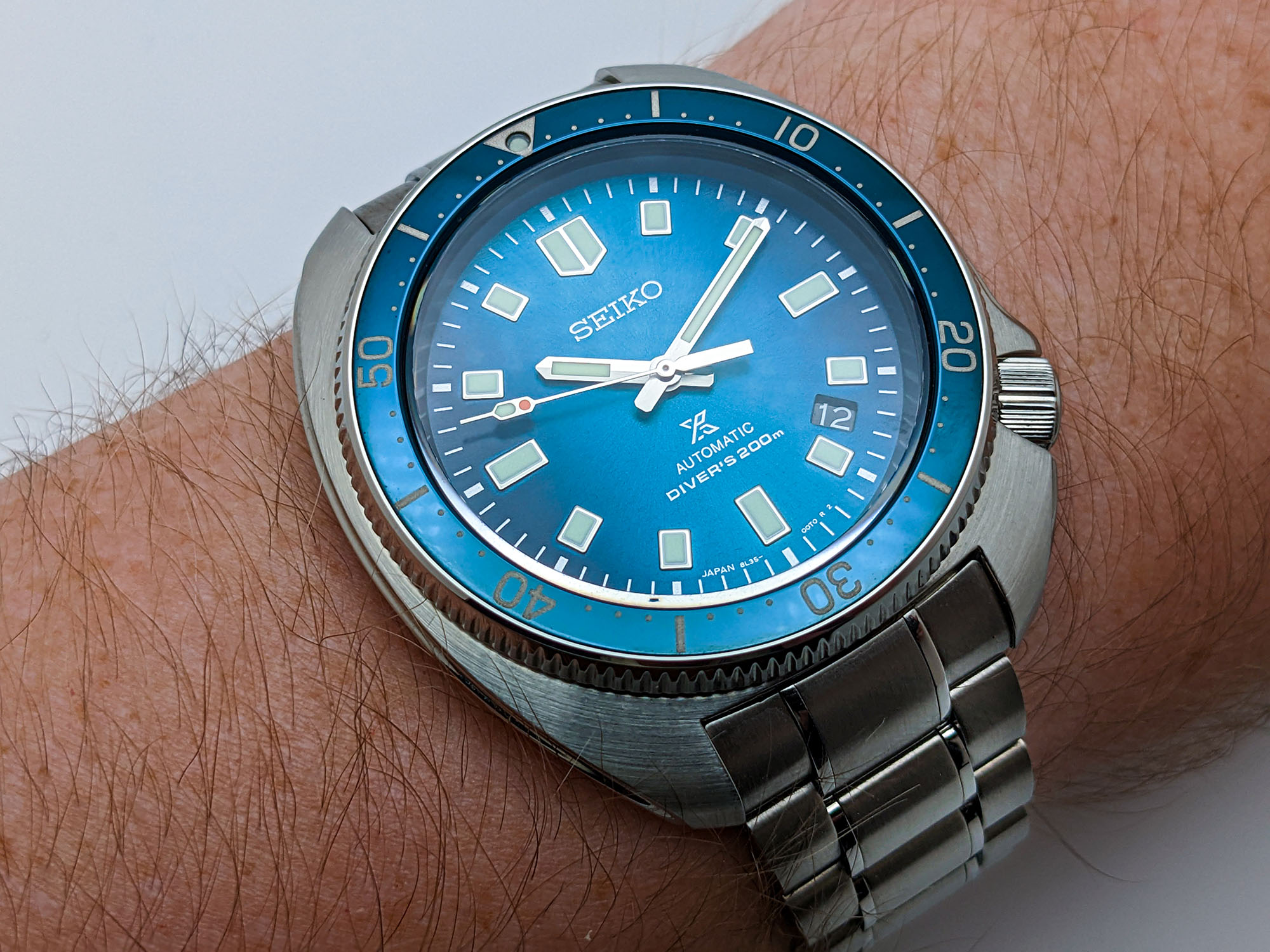 Like so many Seiko cases, the Prospex SLA063 defies its dimensions in practice. This watch wears significantly smaller than its 44mm-wide diameter suggests, due to a combination of short lugs and a severe case undercut that minimizes its footprint on the wrist. Seiko’s proprietary super-hard coating should help this case remain scratch-free long after purchase as well, without giving up the traditional look of stainless steel. With that said, the idiosyncratic shape of the SLA063’s case may not suit all tastes, especially at this (relatively) elevated price point where enthusiasts are more accustomed to a traditional luxury diver design. Seiko tops off this case with a solid engraved caseback featuring the brand’s familiar wave logo, and rates the watch for an ISO-compliant 200 meters of water resistance. 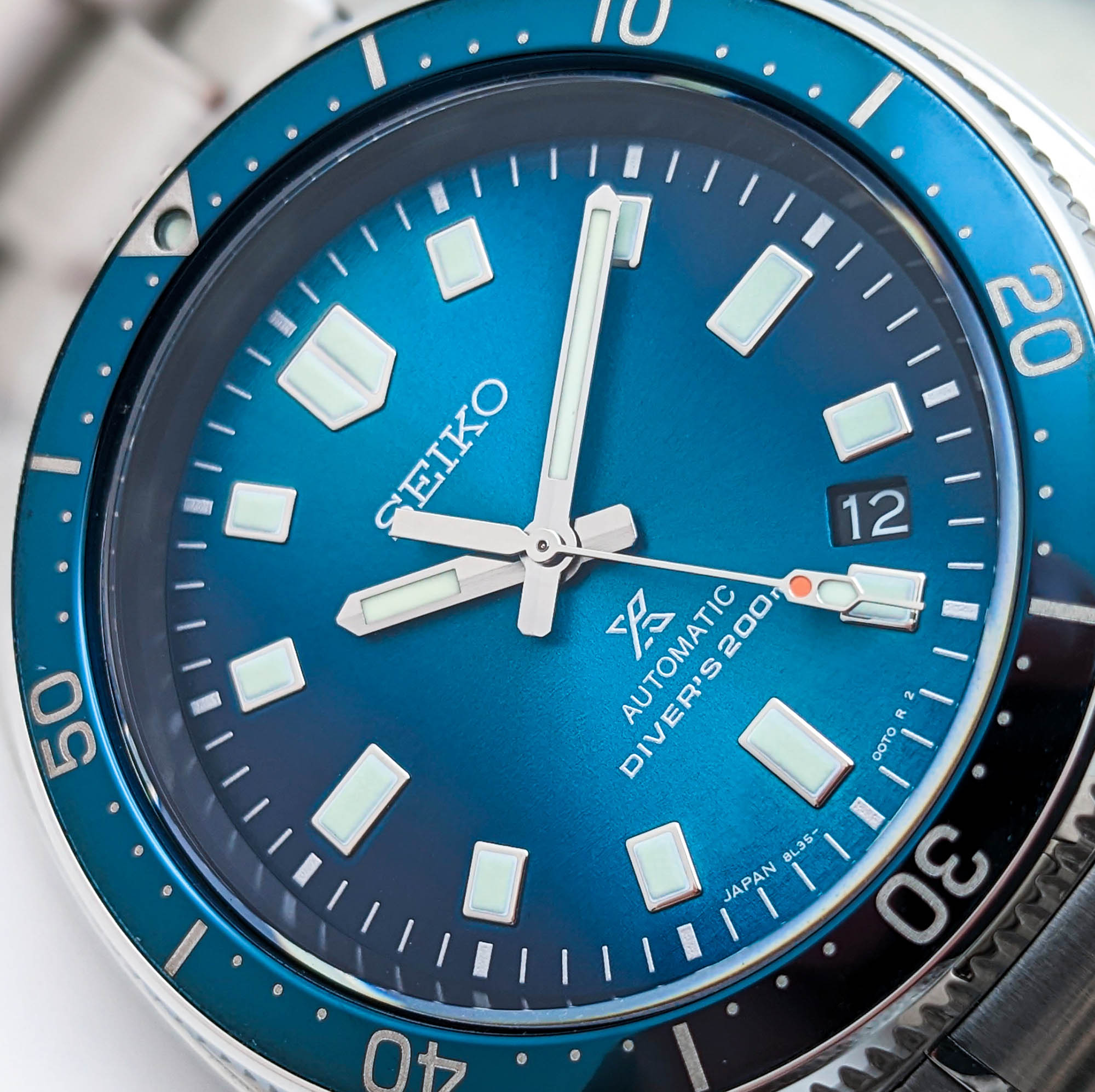 Seiko has a well-earned reputation for creating attractive dials throughout its model range, but even by the brand’s own standards, the Prospex SLA063’s dial is a true standout. With a color palette meant to evoke the glowing, ethereal colors of the Northern Lights, the SLA063 immediately sets itself apart from the rest of the Prospex family, and this dynamic look is the result of a multi-level finishing process. Firstly, the brand uses an unorthodox dégradé effect here, with the edges of the dial at 3 o’clock and 9 o’clock fading to a deep midnight blue to contrast the brighter stripe running from 12 o’clock to 6 o’clock. Next, there’s the classic sunburst effect, with a moderate grain and a broad dynamic range. On top of this, Seiko adds a light rippled texture to the surface of the dial, which helps to visually soften the edges of the sunburst texture to better resemble the ghostly, wispy look of the Aurora Borealis. Of course, the most striking element of all is the dial color itself. This rich, nuanced blue hue shows a dramatic variety of shade variations and undertones in changing light, ranging from nearly black to cobalt blue, turquoise, and even hints of pale green. It’s a shimmering, complex mix of tones that’s difficult to capture on camera, but immediately attention-grabbing in practice. This commitment to nuance also extends to the SLA063’s dial text and outer minutes track, which is rendered in fine metallic silver print that lends an extra sparkle to the dial on the wrist. The rest of the dial layout itself mostly follows the familiar “Willard” pattern, with faithfully reproduced rectangular applied indices, pointed variations on the 6105’s distinctive baton handset, and the instantly recognizable “stoplight” seconds hand. Seiko’s decision to move the SLA063’s date window to the 4:30 position may prove controversial, but this off-center placement helps to visually preserve the layout of the indices while the black date wheel allows this element to more or less disappear when glancing at the dial. 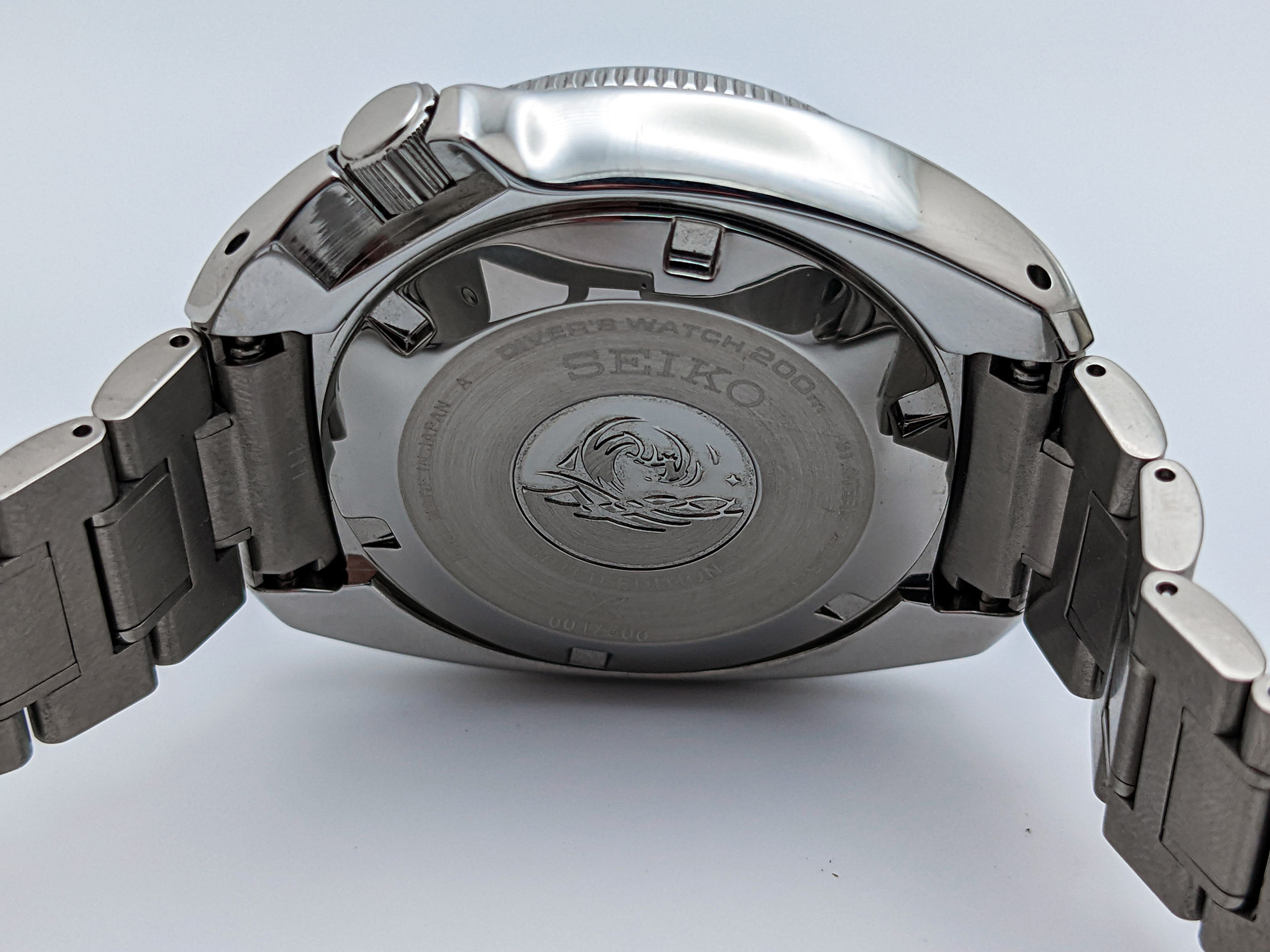 Inside the Seiko Prospex SLA063 beats the in-house 8L35 automatic movement. The 8L35 sits near the top of mainline Seiko’s mechanical movement hierarchy, and the brand backs up this more premium placement with genuinely refined construction. This movement is hand-assembled in Seiko’s exclusive Shizukuishi watch studio, an honor usually reserved for Grand Seiko and Credor models. Seiko places a high emphasis on torque output for the 8L35, ostensibly to ensure smoother operation for its diver-style handset, but despite this high-torque approach the movement still offers a solid 50-hour power reserve at a 28,800 bph beat rate. Our accuracy testing for the 8L35 inside the Prospex SLA063 showed excellent results throughout our testing period, averaging out to +3 seconds per day. 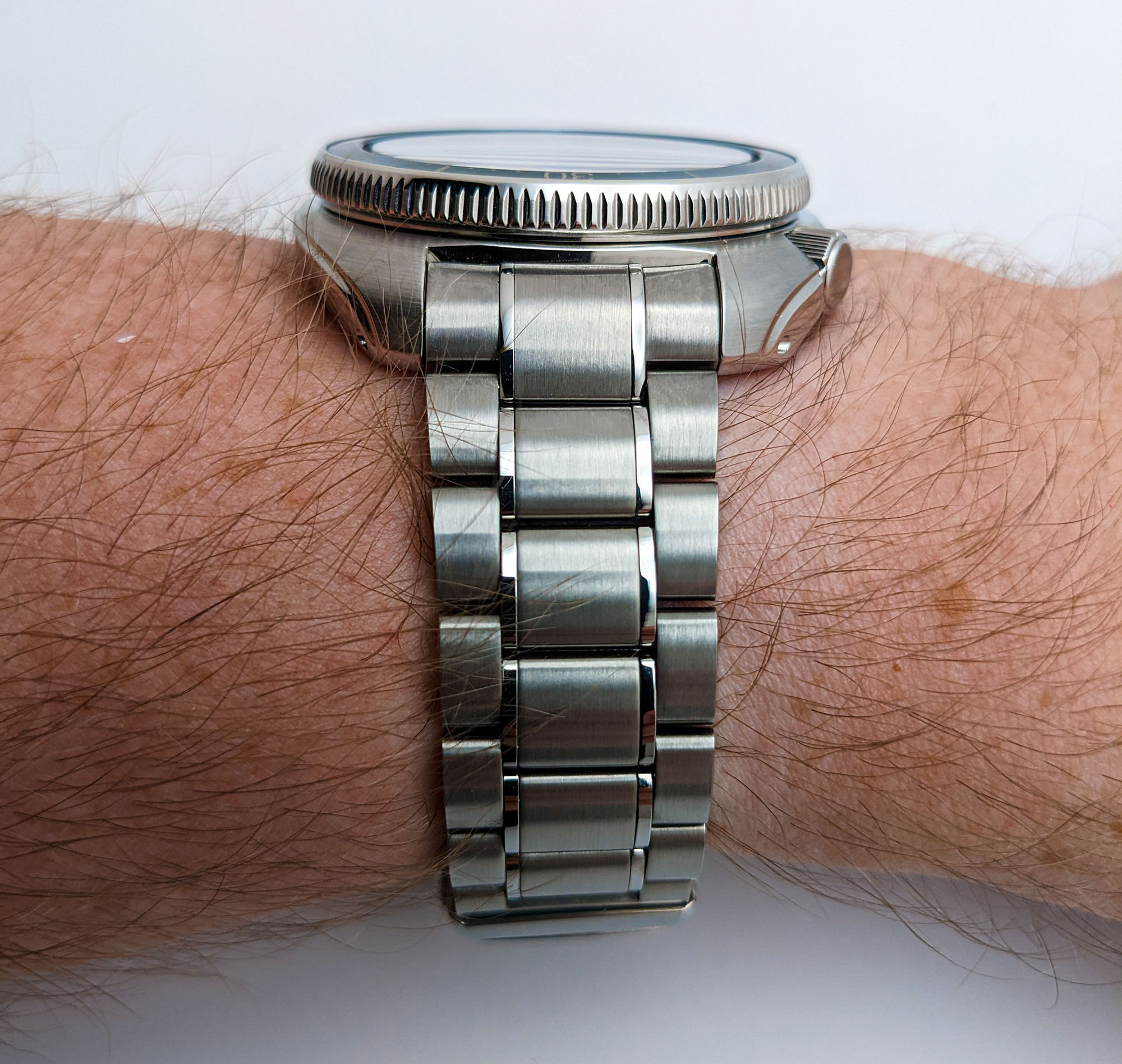 Seiko pairs the Prospex SLA063 with two included strap options. First among these is a modern reimagining of the Seiko 6105’s rubber “tire track” strap in black, but our review sample arrived with only the stainless steel bracelet. Seiko’s bracelets carry an unfortunate reputation with some enthusiasts, but the SLA063 offers several tangible improvements over the brand’s rank-and-file bracelet offerings. For starters, although it may not be apparent at first glance, the polished accents on the edges of the center links are actually fully separate elements. The decision to make these additional narrow links allows Seiko to make a perfectly crisp transition from smooth vertical brushing to bright polishing here, with the added benefit of a deeply shaded border between the two finishes. The clasp is also a notable step up from Seiko’s more affordable models, with a fully machined two-button design that adds a pleasing sense of heft and solidity to the bracelet on the wrist. With that said, the diver’s extension flanking this clasp is exceedingly difficult to operate, and its hinged off-center placement has a tendency to unbalance the watch slightly in actual wearing conditions. Lastly, the solid end links have a notably slimmer profile than the SLA063’s lugs, which leads to a visible down-step that may deter enthusiasts used to flush-fitting endlink designs. 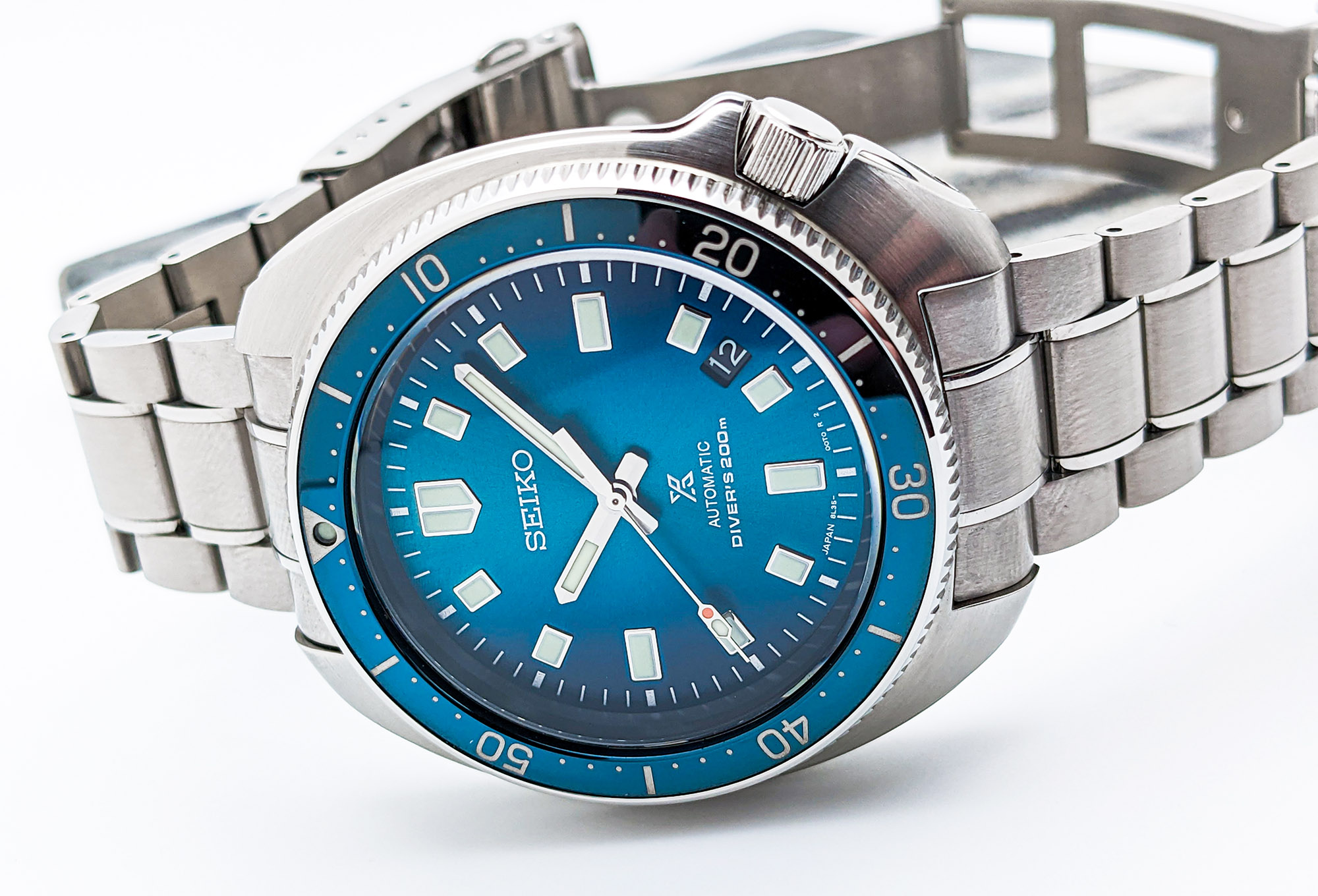 Although its positioning near the top of the standard Seiko Prospex lineup puts the limited edition Seiko Prospex SLA063 in one of the most fiercely contested segments in the modern luxury watch market, this watch’s combination of rock-solid construction, excellent movement performance, and stunning finishing make it a worthy contender against its Swiss rivals. Only 500 examples of the Seiko Prospex SLA063 will be made, and the watch will be available through authorized dealers in October 2022. MSRP for the Seiko Prospex SLA063 stands at $3,100 USD as of press time. For more information, please visit the brand’s website.

Necessary Data
>Brand: Seiko
>Model: Prospex SLA063
>Price: $3,100 USD, limited to 500 pieces, available October 2022
>Size: 44mm-wide, 13mm-thick, 49.3mm lug-to-lug
>When reviewer would personally wear it: When exploring the outdoors, swimming, or when meeting with other dive watch fans.
>Friend we’d recommend it to first: Vintage-style diver fans looking for a bolder alternative to the usual suspects at this price point, Seiko enthusiasts looking for the highest-quality interpretation of one of the brand’s most beloved divers.
>Best characteristic of watch: Iridescent, brilliantly textured dial, exquisite case finishing, strong in-house movement performance.
>Worst characteristic of watch: Bracelet design is better than most Seikos but still struggles against competitors; pricing puts this model in a fiercely competitive segment; buyers may struggle to justify mainline Seiko branding at this price.