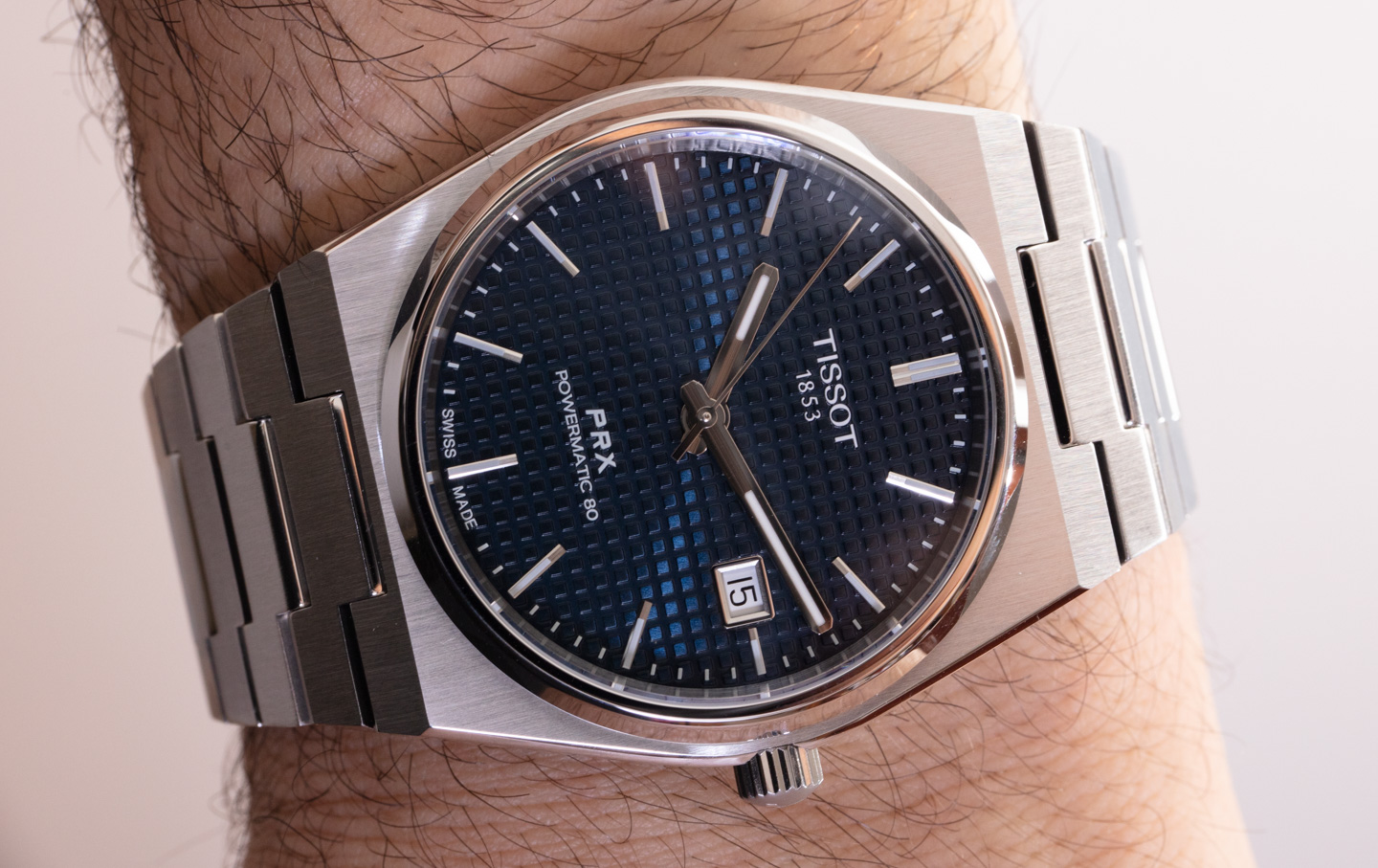 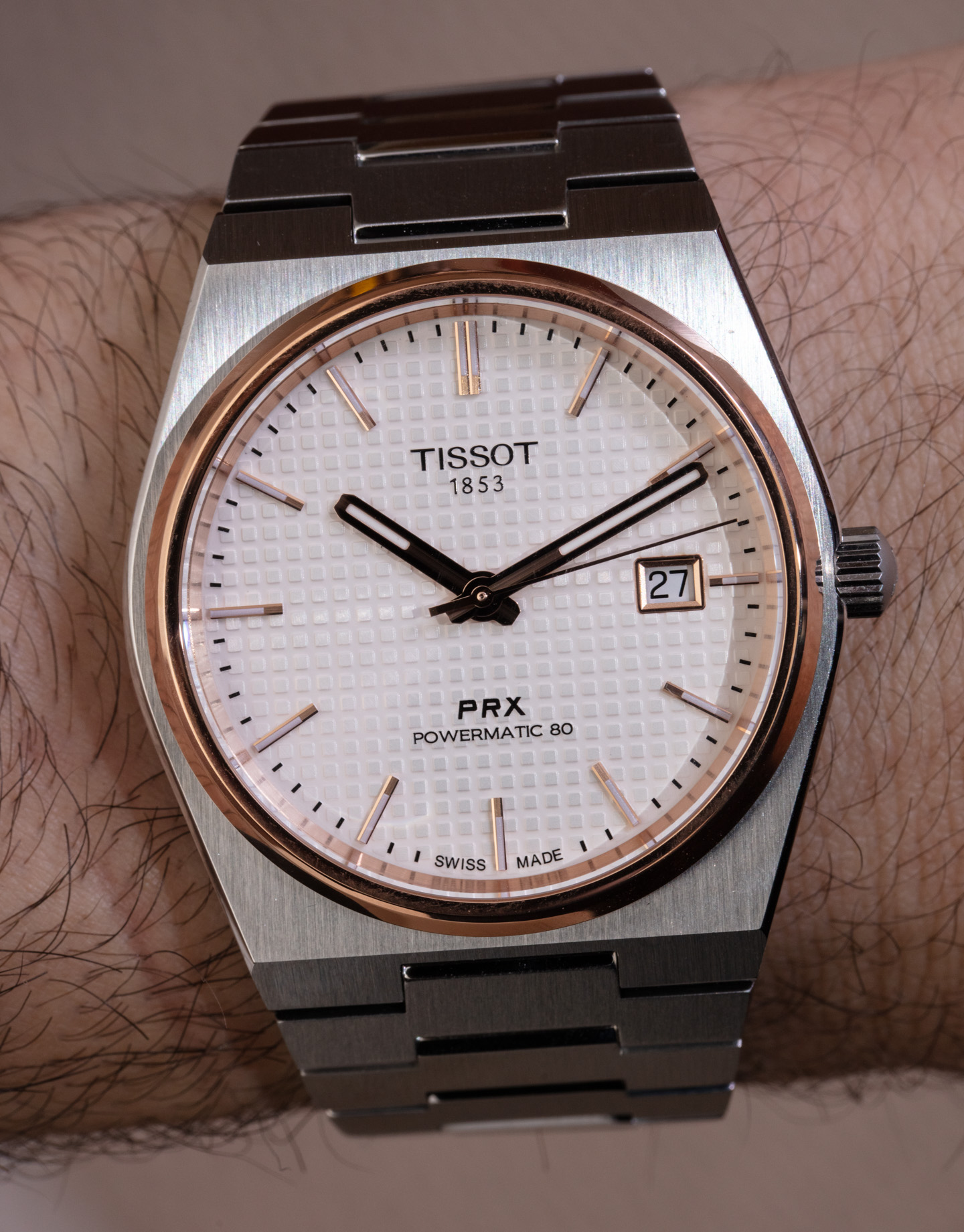 The PRX watch collection from Tissot has proven so popular that the Swiss brand actually released two different versions of it in the same year. That began with the previously reviewed Tissot PRX with a Swiss Made quartz movement (on aBlogtoWatch here), and now a bit later in 2021, we have the Tissot PRX Automatic, which I will review today. Both of these watches are very similar, affordable and enjoyable. The PRX quartz is a bit slimmer, has a more simple dial, and costs less on account of the movement. For the PRX Automatic, Tissot includes one of its popular Powermatic 80 automatic movements and a textured dial to give it a distinctive and trendy look. And for under $700, you can have a satisfying Swiss Made mechanical watch experience that will, in many ways, be just as satisfying as a timepiece costing several times more.

The Tissot of today is a brand worth paying close attention to. The Swatch Group-owned company has fresh management under CEO Sylvain Dolla (formerly of Hamilton), who has made it clear that he wants watch enthusiasts around the world to covet Tissot once again. What Dolla is doing particularly well is combining his eye for excellent product quality, with compelling value propositions. Tissot has so many excellent designs from the past, as well as the DNA to be a futuristic brand, that Dolla and his team will have years of interesting ideas to have fun with. 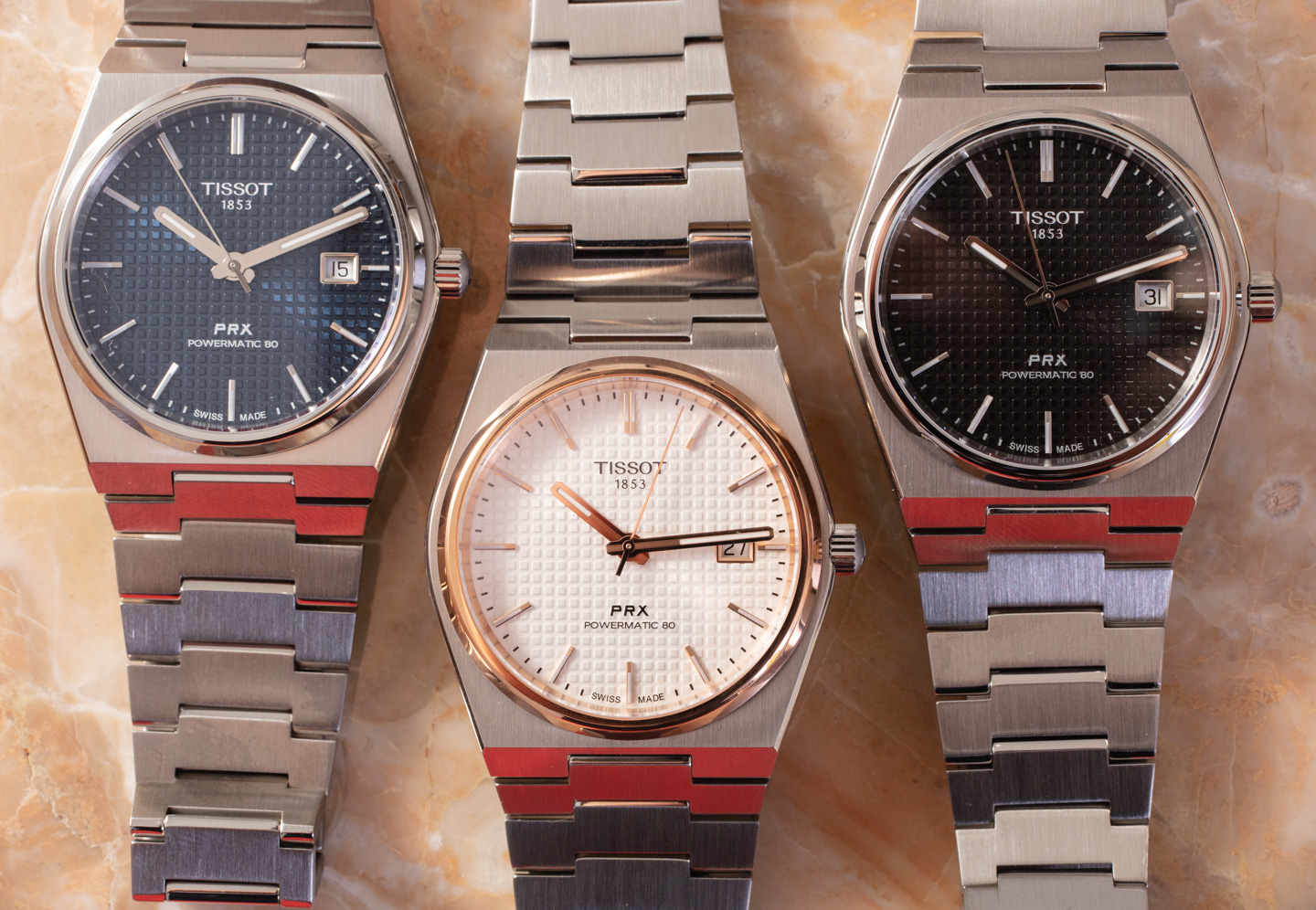 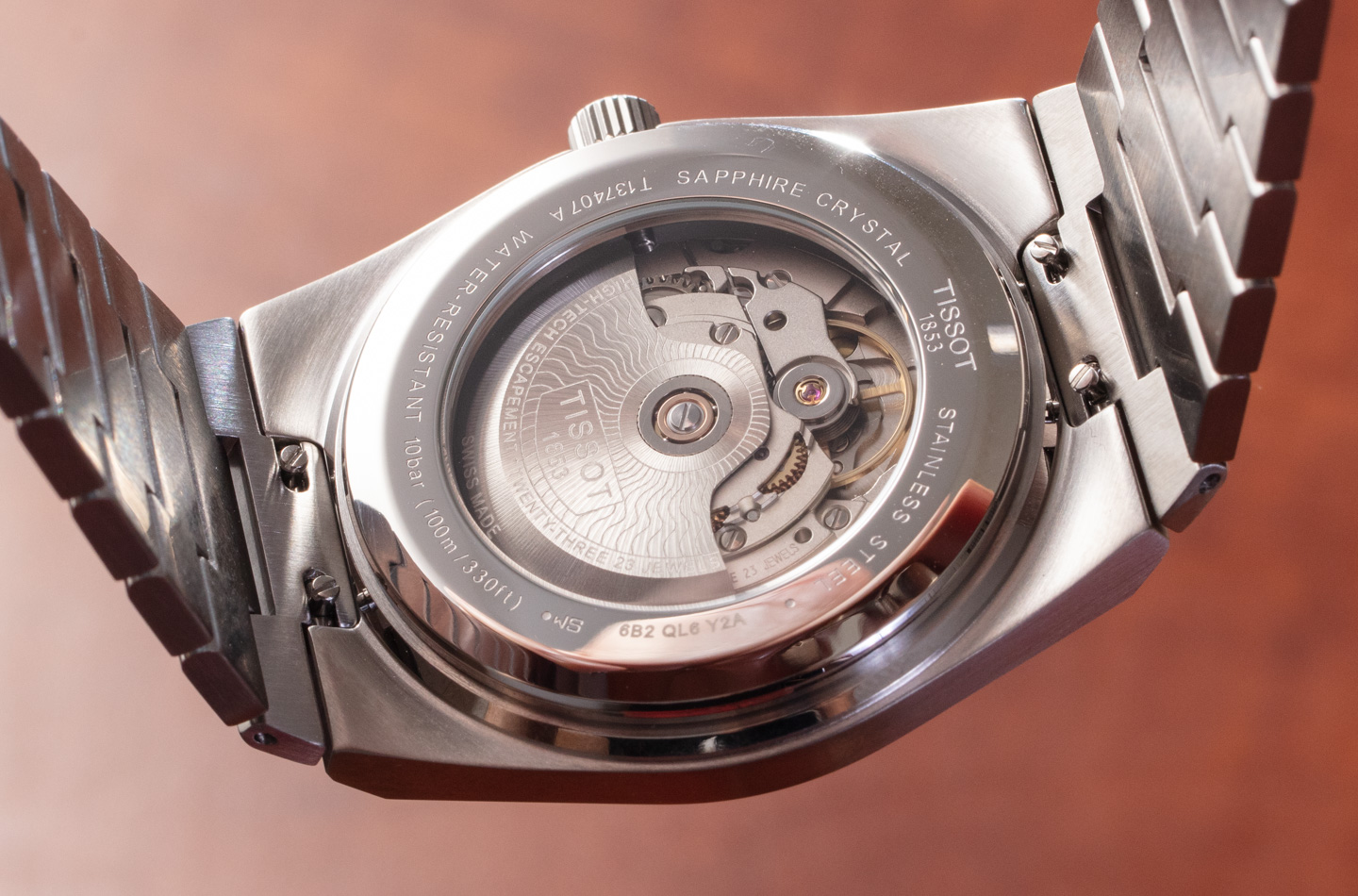 The PRX Powermatic 80 is actually a very simple concept which is why I think it is so effective. The PRX case is a revival of a smaller design from the late 1970s. At the time, wristwatch futurism was in, given the ushering in of mainstream quartz movement technology and the end of the traditionalist era. Swiss watch designs were bold and modern, with a great emphasis on external aesthetics. They might not have been able to compete with Asian brands when it comes to sheer prices, but the Swiss could always beat the competition when it came to design and construction quality.

Flash forward about 40 years later, and these same designs are trendy for entirely different reasons. Today men’s bracelet watches, which look like a hybrid between jewelry and a wristwatch, are extremely popular, especially at the high-end. Now, all of these amazing men’s watch bracelet designs from the 1970s and 1980s are coming back to much fan fair. We love these designs because they are conservative without being boring, manly without being too macho, and elegant, while also being legible tools. 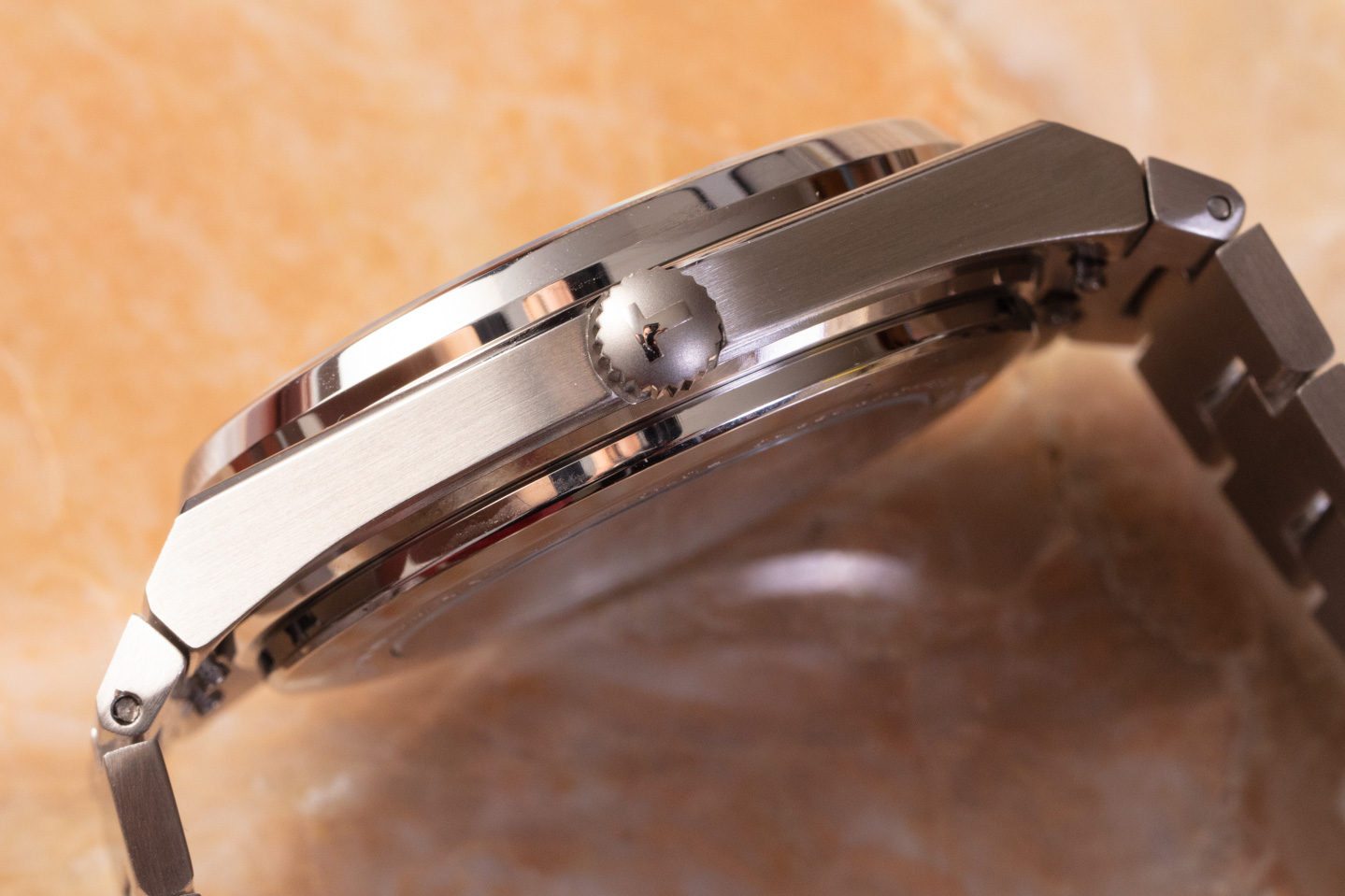 The Tissot PRX Powermatic 80 debuts in three dial styles with the silver dial also featuring a gold-tone bezel and hour markers (and its comes with a small price premium of just $25 over the non-gold-tone models). Each of the three watches has a 40mm wide steel case that is water resistant to 100 meters. The cases are very wearable with a roughly 40mm lug-to-lug distance, as well as a case thickness of just 10.9mm. Over the dial is an AR-coated sapphire crystal, and over the movement is another sapphire crystal offering a view of the Powermatic 80 mechanism within.

Similar to the original PRX quartz from earlier in 2012, the PRX automatic has a wonderfully finished case and bracelet, which is part of where you get the “looks like a more expensive watch” experience while wearing this product. Most of the PRX case and bracelet is brushed, but the polished sections really give it a sense of life and have been creatively placed on angles all over the watch. The tall bezel is also polished, which offers a classy (versus sporty) touch, lending itself well to the PRX being a formal or office watch, in addition to something you could wear more casually. 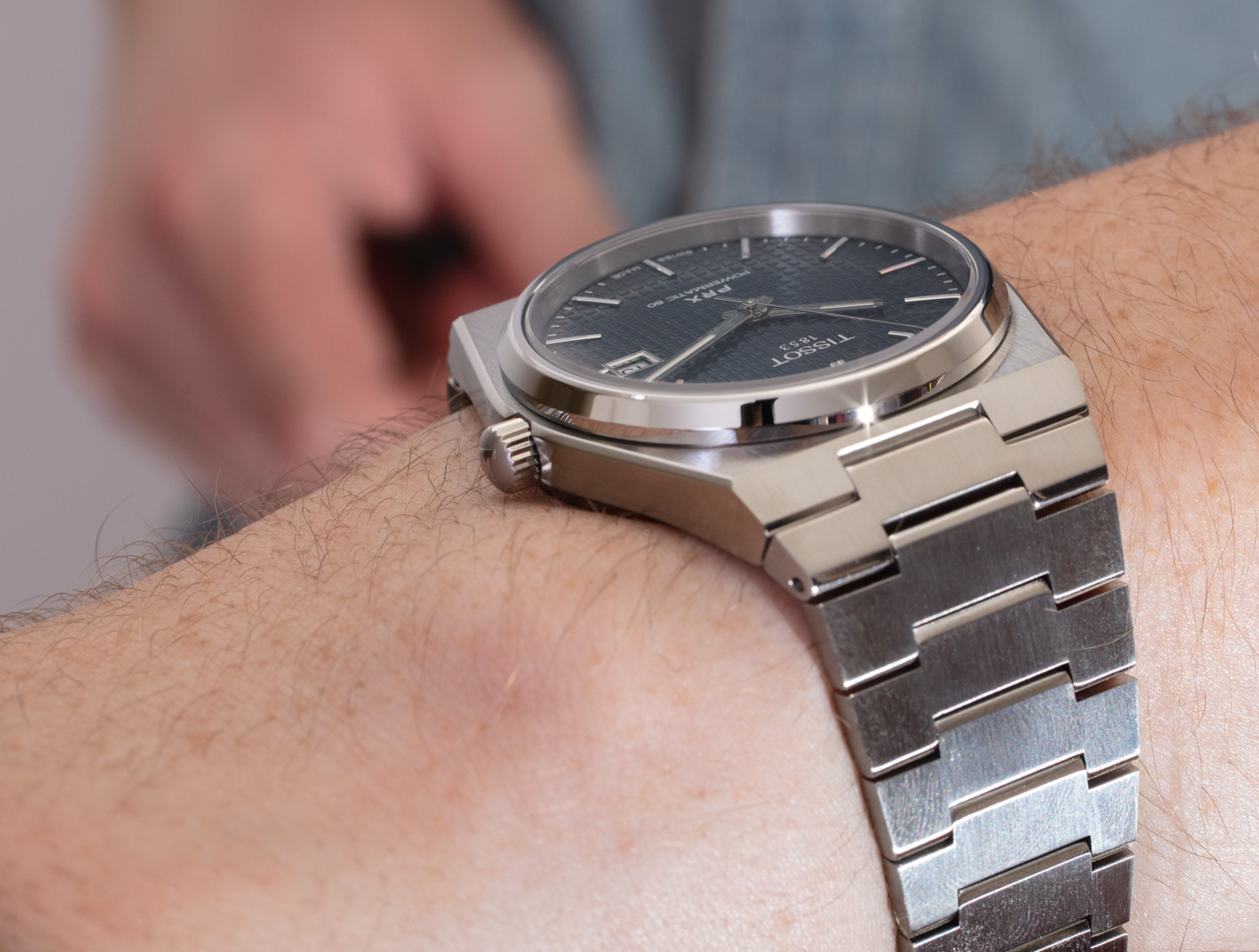 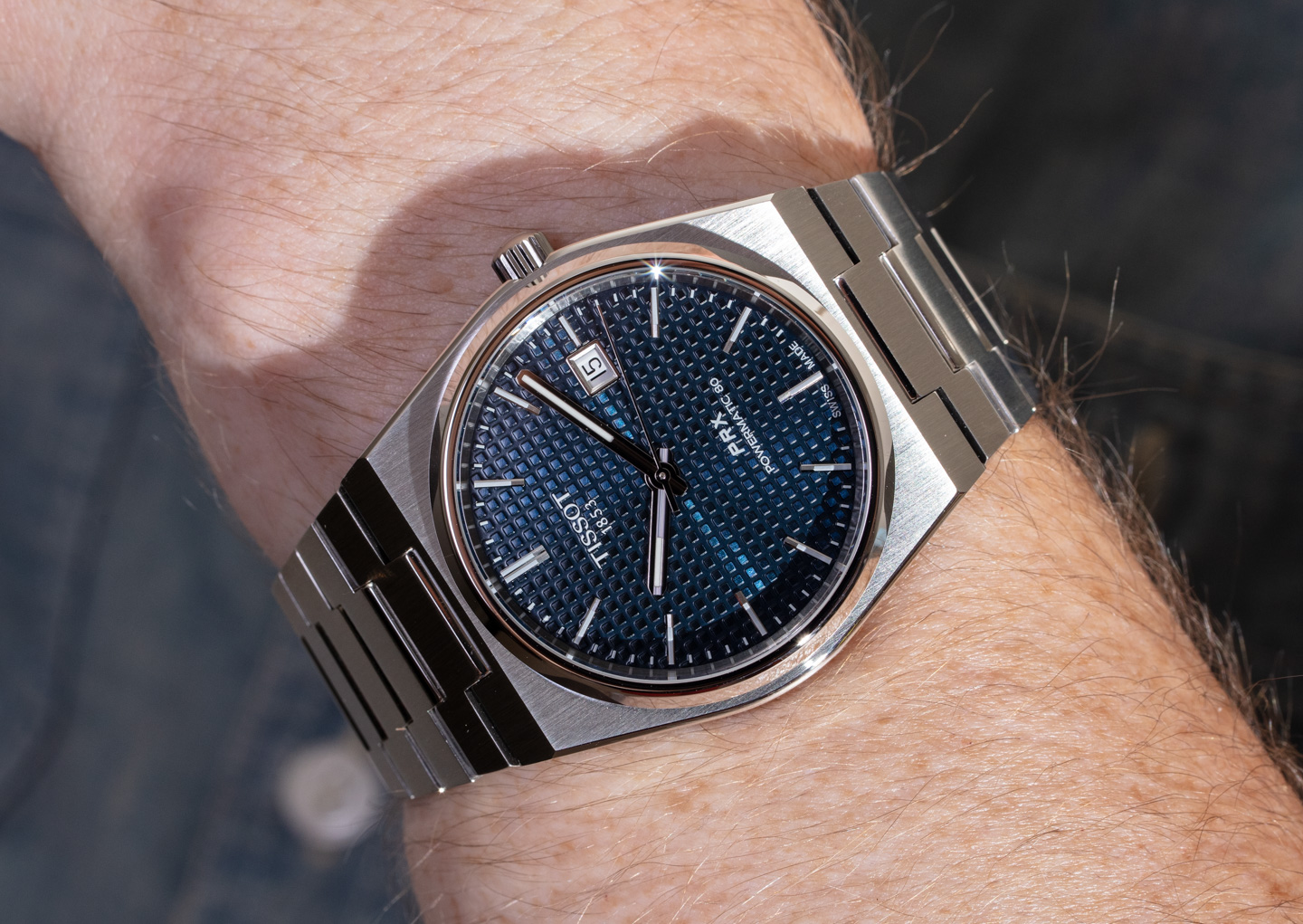 The PRX Powermatic 80 dial is everything you like about the original PRX, only better. The textured dial (similar to the “mega-tapisserie” dials on Royal Oak watches) offers a welcome sense of added depth and helps contrast against the hour markers and hands. The hour markers are applied, and both they and the hands are given luminant for being able to read the time in darkness. The dial features the time along with a date window at 3 o’clock. Tissot currently offers the PRX Powermatic 80 dials in black, blue, and the above-mentioned Silver. I have a feeling that in the coming years, more dial colors (such as green) will be on their way.

To be honest, there is no real winner between the PRX quartz and PRX automatic. The watch cases wear almost identically, so why did Tissot release both in the same year? In my opinion, this goes to Tissot’s larger strategy to appeal to both mainstream and enthusiast consumers. Tissot knows that the automatic version of the watch will appeal to enthusiasts more (given the primary interest in mechanical versus electronic watches), and that having enthusiasts rally behind the product is exactly what the mainstream consumer needs to get excited about it. That said, quartz watches are more accurate and less expensive, and thus more practical for a lot of non-enthusiast timepiece wearers. Thus, the PRX concept cannot be fully marketable and successful without both a quartz and automatic model. I think that’s pretty smart, and only larger companies such as Tissot could make the call to simply produce both versions of the watch at the same time. 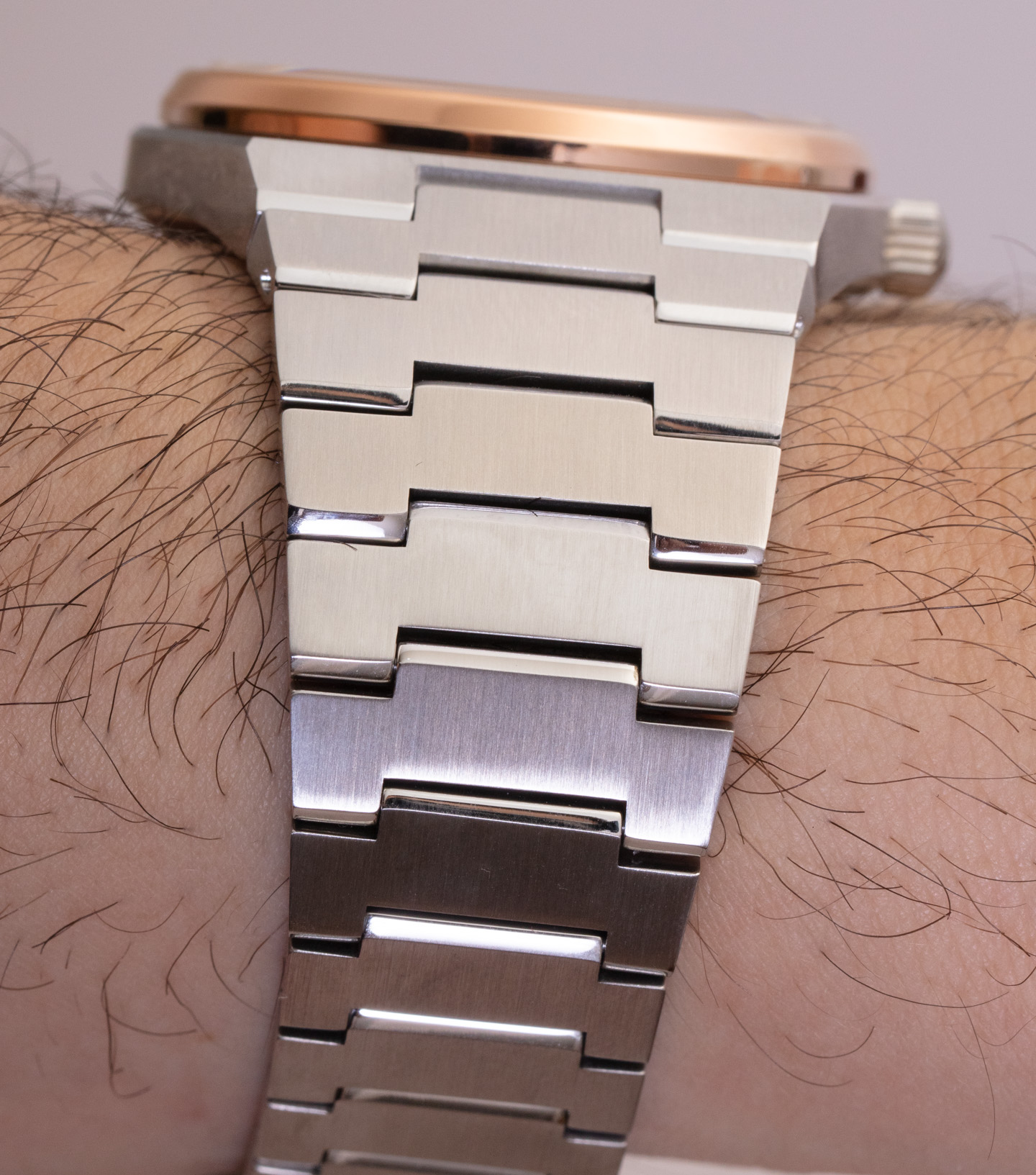 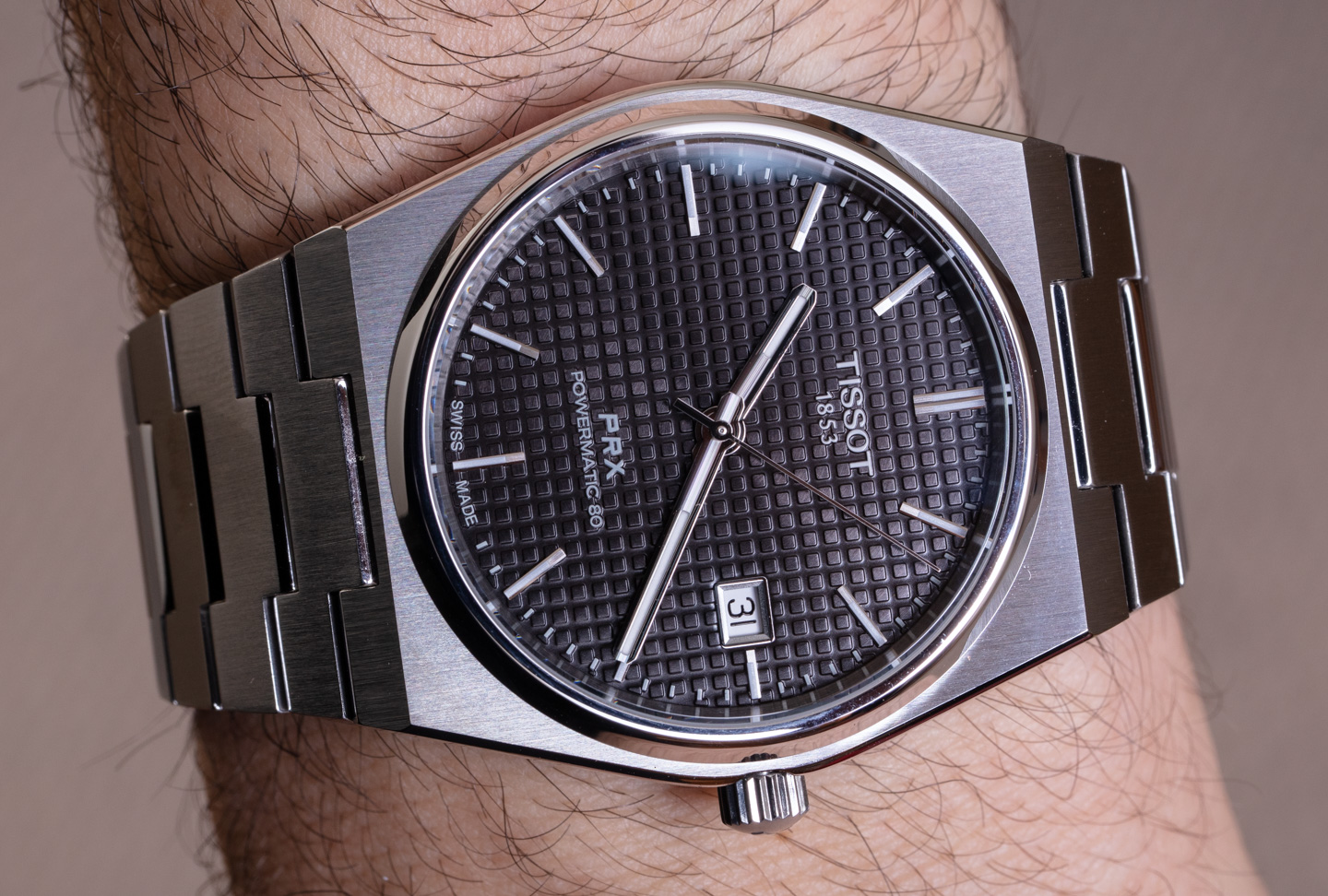 The Powermatic 80 movement (the caliber Powermatic 80.111, as used here), is a 3Hz automatic movement with 80 full hours of power reserve. These are used across a variety of Swatch Group models and are produced by ETA, which is also owned by the Swatch Group. The movements are highly refined and much more accurate than most historic 3Hz automatic watches. A silicon-equipped version of the Powermatic 80 is also available in some slightly higher-end (and I’m talking like $100 more) Tissot products, such as the Gentlemen. I like the Powermatic 80 when it is in under $1,000 watches, and believe that it represents one of the best values in a Swiss Made automatic movement.

If you have been romanced by the idea of a bracelet style men’s watch in steel with an integrated bracelet, and don’t want to spend too much money, then the Tissot PRX Powermatic 80 should be on a short list of options to seriously consider. I find a lot of joy in wearing both the PRX quartz and automatic but agree that the latter is the choice model for when you are around other timepiece enthusiasts. The Tissot PRX Powermatic 80 comes as the reference T137.407.11.041.00 in blue and the T137.407.11.051.00  in black at the price of $650 USD. The reference T137.407.21.031.00 in silver and gold tone has a retail price of $675 USD. Learn more or order at the Tissot watches website here.

Necessary Data
>Brand: Tissot
>Model: PRX Powermatic 80
>Price: $650 – $675 USD
>Size: 40mm-wide, 10.9mm-thick, and ~40mm lug-to-lug distance.
>When reviewer would personally wear it: Versatile casual dress watch with both fashion and watch-enthusiast appeal. Makes for a very solid daily wear.
>Friend we’d recommend it to first: Anyone wanting a good value and trendy design from a respected major Swiss watch brand at a great price.
>Best characteristic of watch: Tissot gets all the little details right proving that they are not only still imminently competent at making watches, but that they understand what consumers are seeking today.
>Worst characteristic of watch: Some consumers might be confused as to which of the two PRX models to buy (quartz or automatic).