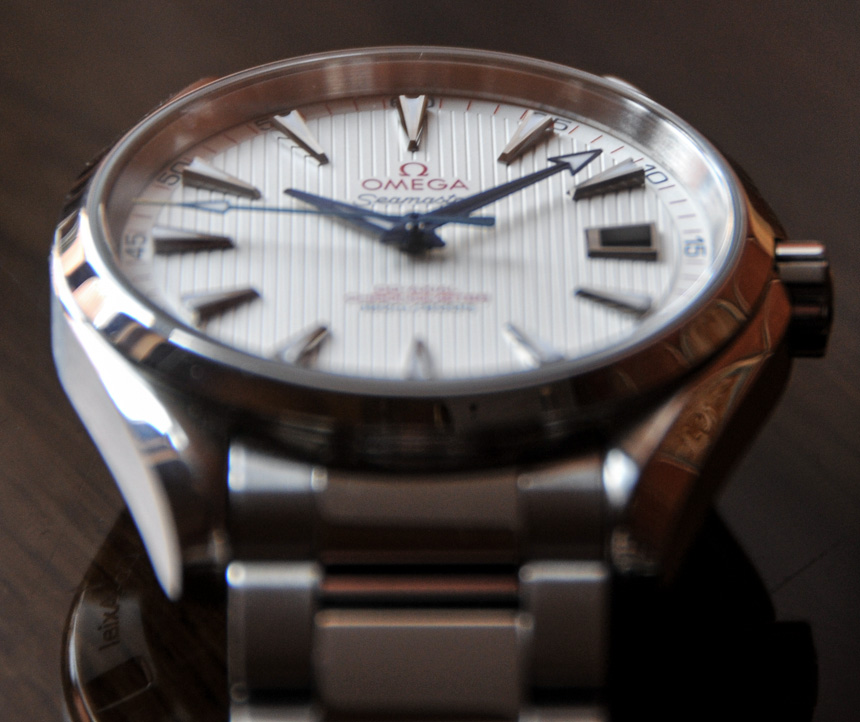 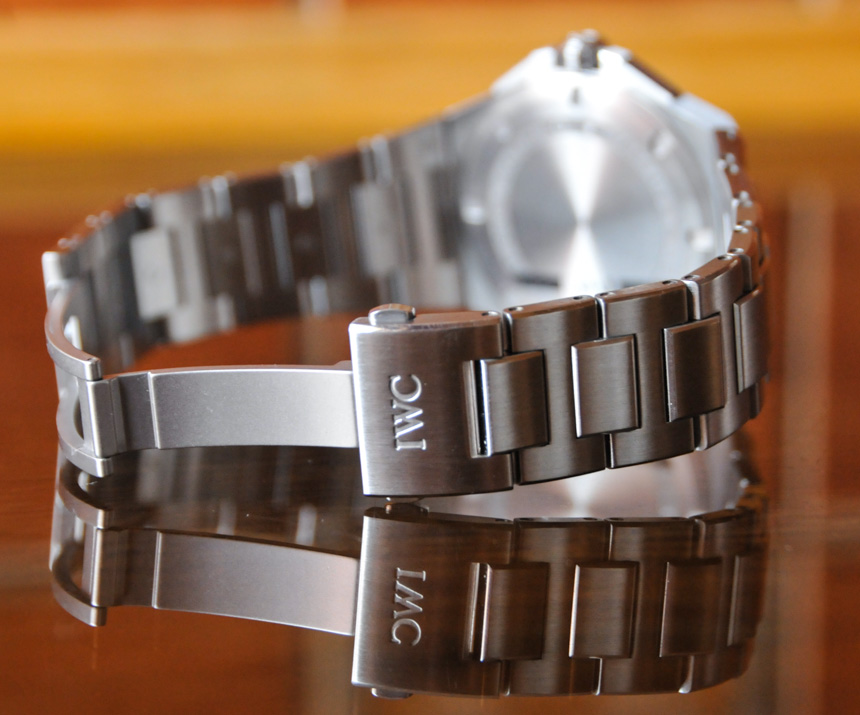 DIAL, HANDS AND LUME
Both dials are white, although Omega calls theirs “opaline silver”. Bulgari and Cartier are two other offenders who do the same, but for me they are all white. The hour indices are applied in both cases, the Omega ones being white gold, whereas IWC does not say anything about the material. The difference is that Omega’s indices are arrow shaped, rhyming with the arrowhead of the minute hand. The hour hand, however, has its head missing which takes some getting used to, but it’s not the only Omega so configured. I suppose Omega considers this part of their heritage. It does certainly set apart the AT’s looks, as does the vertically grooved teak dial, which can look dramatically different depending on the angle of the incident light. My only gripe with this dial is the abundance of text – six lines, if you count the Omega logo. It certainly is an interesting dial, and I often find myself looking at the dial for no good reason other than its beauty.

IWC went for a much more austere – some might even say boring – look, with square hour markers and fence post hands, with both the indices and the hands polished to an impeccable mirror finish. The dial is a stepped one, giving it some welcome depth. The amount of text on the dial is just what it should be: manufacturer and hometown at 12 o’clock and model at 6. I’m in the camp which says the less writing on the dial the better (e.g. Patek Philippe – Geneve) but in this case one can’t ask IWC to just drop the distinctive INGENIEUR intersected with a lightning bolt (reference to its anti-magnetic properties). After all, it has been around since the first IWC watch launched in 1955. The most important aspect under this heading must be legibility. In that, both watches are about as good you can get. The IWC hands throw off light to achieve this, while the shiny navy blue hands of the Omega ensure contrast with the dial well into dusk. Luminosity is poor to disappointing in both cases. After about an hour in the dark, both are practically useless. The Ingenieur’s green lume is all but gone, while Omega outright mocks you with the blue lume still clearly visible on the hour markers but none left on the hands.

The point goes to: Omega (by a small margin)

BRACELET AND CLASP
Both bracelets have three-row links, with the centre links on the Omega Seamaster Aqua Terra polished and the others brushed. Note, however, that the links on the standard Omega Seamaster Aqua Terra are all brushed with polished sides. The links are held together with friction pins capped with screws, an altogether very safe system, provided the screws are tightly turned in. Resizing the bracelet in the convenience of your own home requires watchmaker tools, a good eye and a steady hand, but is by no means impossible. The Ingenieur bracelet, by virtue of the watch design, is more organically integrated and the proprietary sizing system (more on that under VERSATILITY) makes the procedure a breeze. The Omega has a signed butterfly clasp with release buttons on both sides. The IWC has a signed fold over clasp, also with two release buttons. Both are equally secure but as I generally prefer fold over clasps for their ease of use, 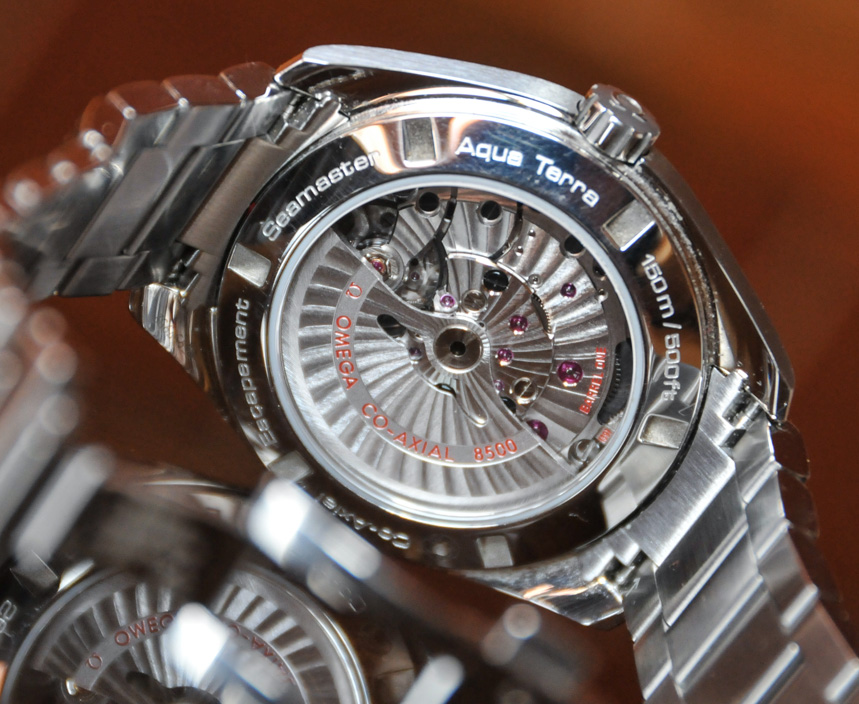 OVERALL DESIGN
When the Ingenieur 3239 was unveiled, many saluted it as a return to the third-generation Ingenieur designed by the deservedly famous Gerald Genta and released in 1976, in an era known (at least for the Swiss watch industry) as the “quartz crisis”. I beg to differ. The case of Genta’s Ingenieur had no sharp edges, it was, from case through lugs to bracelet almost like something organically grown, rather than engineered. It had baton hands, restrained hour indices and a quiet elegance belying its tool watch nature.

The model change in 2005 was a pronounced departure towards a more angular, Royal Oak-like case. Although it retained the five holes in the bezel as a design cue, they no longer served any purpose: Genta’s Ingenieur had a screwed-in bezel, hence the need for the holes. The 2013 has also retained the holes as a vestigial trait: they are about as useful as the hind leg bones of a whale. The angular crown guards add another element of sharpness. Having said all that, the overall style of the watch, regardless of how much or how little, in fact, it resembles the Ingenieur SL, has a coherent language, more angular but still restrained elegance and exudes the Germanic no-nonsense functionality for which IWC’s best, post-quartz-crisis era models are known for.

The Omega Seamaster Aqua Terra also builds on various design elements borrowed from Omegas of yore, adding some fresh ones like the vertical grooves of the dial and the trapezoidal date window. I’m not saying that these elements don’t work well together, it’s just that the watch – especially compared with the Ingenieur – gives the impression of something put together by a design committee which was tasked to create a crowd-pleaser that is a dress, sports and dive watch rolled into one. To Omega’s credit, they did indeed reach their goal. While I don’t have production figures available, I believe it is at least their second most popular current model after the Planet Ocean, if not the most popular one.

The point goes to: IWC (and of course the late Gerald Genta)

MOVEMENT
I am not a watchmaker, so my opinion here is just an educated user’s perspective. The Omega Seamaster Aqua Terra has the by now, tried-and-tested 8500 movement. It boasts a significantly longer power reserve (see table above), which means that if you put the watch down on Friday evening, it will still be ticking come Monday morning. The Ingenieur has a very capable and robust ETA 2892-A2 movement, which has the decided advantage that any competent watchmaker would probably be able to service it for much less than what an Omega-certified service centre would charge for the 8500. It is, as far as I know, reworked by IWC, but I had no means to determine details, nor does IWC reveal how extensive that work is. In terms of out-of-the-box accuracy, IWC has an excellent track record, but in the past decade or so Omega has overall pretty much caught up with them and numerous anecdotal evidence and my personal experience shows that their 8500 movement has outstanding long-term stability.

Keep in mind though that we are probably splitting hairs here, the difference in long-term accuracy being maybe a few seconds better for Omega, provided that both movements are properly regulated. The Omega also has the convenience of an independently settable hour hand, making time zone adjustments easier, at the loss of the quick-set date. Finally, we come to the thorny issue of in-house versus outsourced movements. Whatever your personal opinion may be, it is a fact that IWC does not have an in-house movement that would fit into the Ingenieur’s fairly slim case. Then again, Omega’s 8500 movement would not fit into a reasonably water resistant and otherwise robust 10mm case either.

The point goes to: Omega 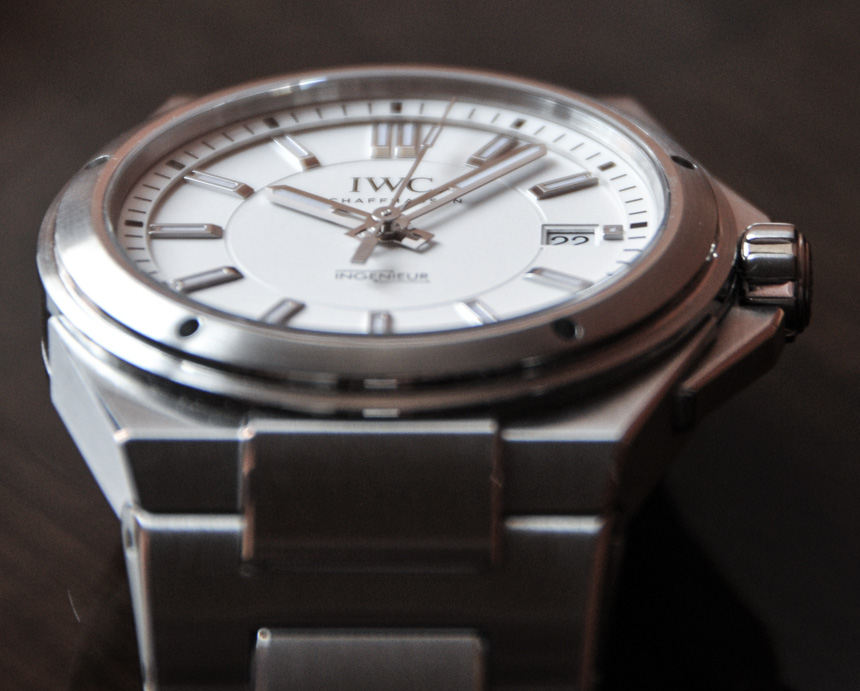 VERSATILITY
On the OEM bracelets, both watches show the same amount of versatility, with the Ingenieur a bit more capable towards the dressy end of the spectrum, mainly due to its slimmer profile. The black dial version not discussed here would cover the same spectrum, shifted a tiny bit towards formal. The Omega Seamaster Aqua Terra, on account of its bolder design has a slight advantage at the sporty end of the spectrum. But once you start looking at other straps/bracelets, the picture does change quite significantly. IWC has the notable advantage of its proprietary bracelet quick-change system*, making the change easy and painless using just a pair of toothpicks. IWC does include two brass pins for that purpose, but I just use toothpicks – they are almost always at hand and make the whole thing even more fun. However, this very system means that the owner is limited to the strap options offered by the manufacturer. In our case, at the time of writing (October 2013), that is one black rubber strap with a pin buckle. It would be nice to have the choice of least one canvas/kevlar and one leather strap. The Omega Seamaster Aqua Terra has a standard lug width of 20mm and a large selection of OEM straps and bracelets, be it for this particular model or other Omega models. And there are of course the almost endless choices offered by third-party strap/bracelet manufacturers.

The point goes to: Omega
* – under license from Cartier

VALUE FOR MONEY
In econometrics there are at least five known and accepted ways to measure brand value, with varying degrees of acceptance and accuracy. Breaking that down to individual watch models is probably both difficult to achieve and somewhat futile. As far as brand recognition goes, the average person is much more likely to have heard of Omega than IWC. On the other hand, watch enthusiast arguably perceive IWC as having a slightly higher standing among the general group of luxury watches. IWC is also more exclusive for two reasons. First and foremost, Omega makes ten times as many watches than IWC – 750,000 units in 2012 against 75,000* – and second, IWC is a mens’ only watch brand. Whether that second point is a plus or a minus, depends on your emancipation level and your courage to openly admit controversial preferences. For me it’s a plus, and with that I have simultaneously lost most readers of the fairer gender and submitted myself to terminal public stoning. To the extent that search popularity** is any indication, Omega’s Seamaster line is second only to the Rolex Submariner, while the highest-ranked IWC line is the Pilot, in place 14. Although the MSRP difference is only about 15% in favor of Omega, their authorized dealers tend to offer more generous discounts. Also, Omega offers a four-year warranty on all watches with the 8500 movement against IWC’s two years. In terms of resale value, IWCs tend to perform better, but that varies quite a lot depending on the particular model. And there is of course the previously discussed issue of in-house versus generic movement, where Omega has the clear advantage. All things considered,

THE “SINGLE WATCH” CRITERION
You may or may not have noticed, but so far, based on eight criteria, the points race is a draw. That was by no means intentional, I just counted the points myself while writing this paragraph. If anyone asked me which of these two watches to buy as a do-it-all piece, based on an objective assessment of functions, features and value for money, I would almost certainly suggest the Omega Seamaster Aqua Terra.

But… Yes, there’s always a but, isn’t there? At any given time, my watch collection consists of six to ten pieces, with a clear preference for sporty steel watches. Once a year at the annual State of the Collection navel-gazing – or sometimes more than once a year, depending on how fast my collection changes – I play a little solitary game of culling, determining which watches would go and in what order if I wanted or would be forced to downsize. If the two remaining ones would be the Omega Seamaster Aqua Terra 8500 and the IWC Ingenieur, the subjective choice would be the Ingenieur, on account of its design, wearability, versatility and overall appeal.