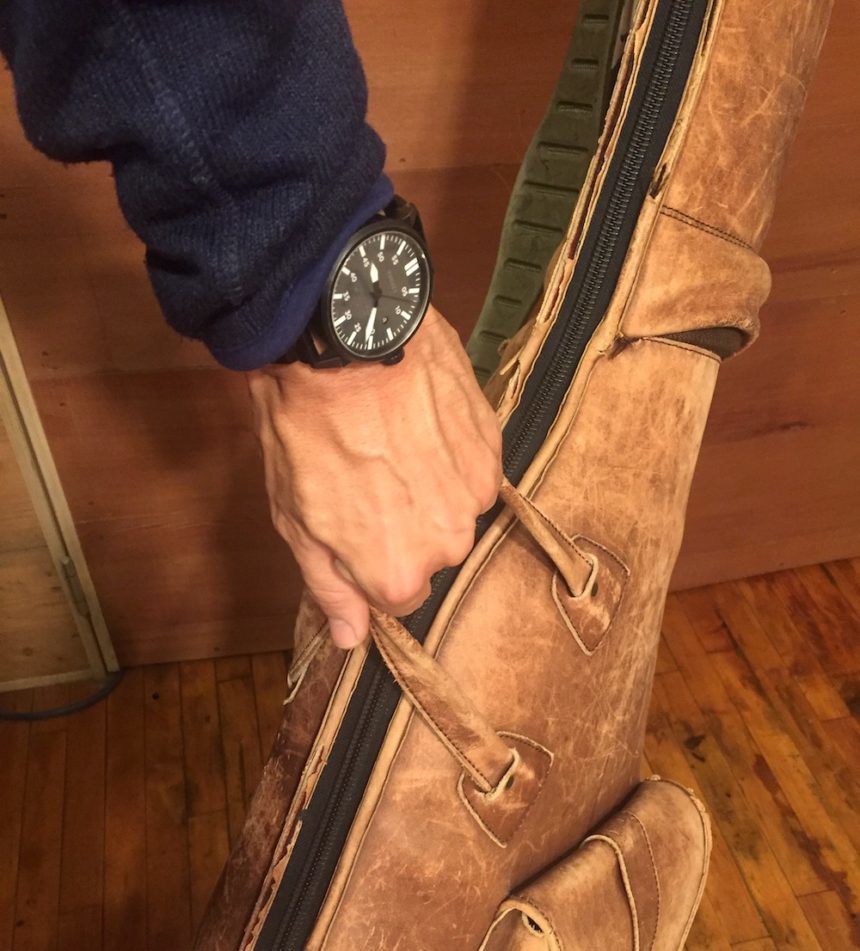 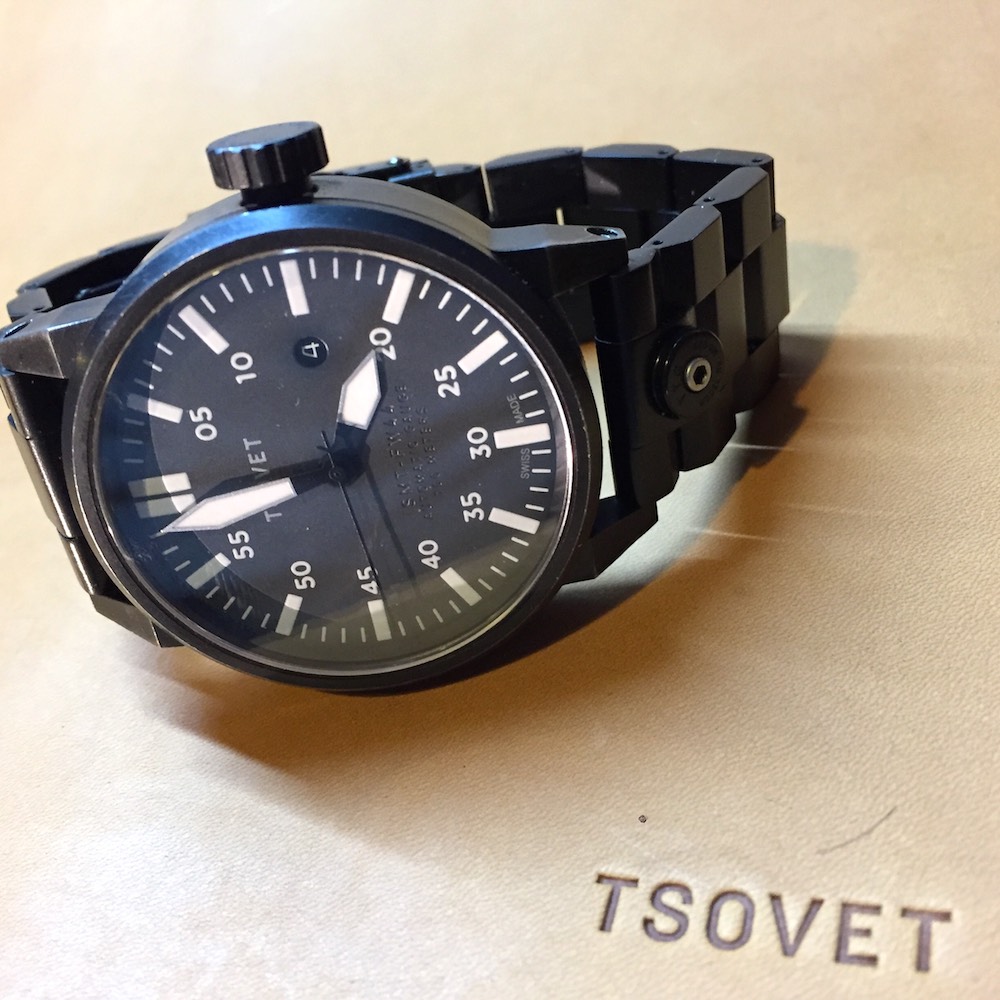 In July of 2017, the monthly giveaway watch on aBlogtoWatch was a Tsovet SMT-FW44. The winner was Miles O. from Brooklyn, New York, USA, and after enjoying his new timepiece (retail price $975), he has given a watch winner review for us to share with you – the aBlogtoWatch audience. Thanks to Miles and all the other watch winners who share their experiences with the world. Here is Miles’ review:

I’m not a watch collector, but at some point in the last couple of years I started a habit of fantasy shopping for watches in airports (my work as a musician involves a lot of travel). I’ve always been fascinated with clocks, watches, compasses, and mechanical instruments in general. A recent project with the kids was building a functional Lego clock complete with pendulum, escapement, and a seconds hand sub-dial. So last June I was checking out field watches online and ran across the Tsovet giveaway. I signed up on a lark and was of course quite surprised and excited to find out in July that I had won the Tsovet SMT-FW44. It arrived shortly afterward on a brown leather band, with a bag of goodies including three other bands (two in black leather with different hole spacing and a black bracelet), a leather case, and official papers. 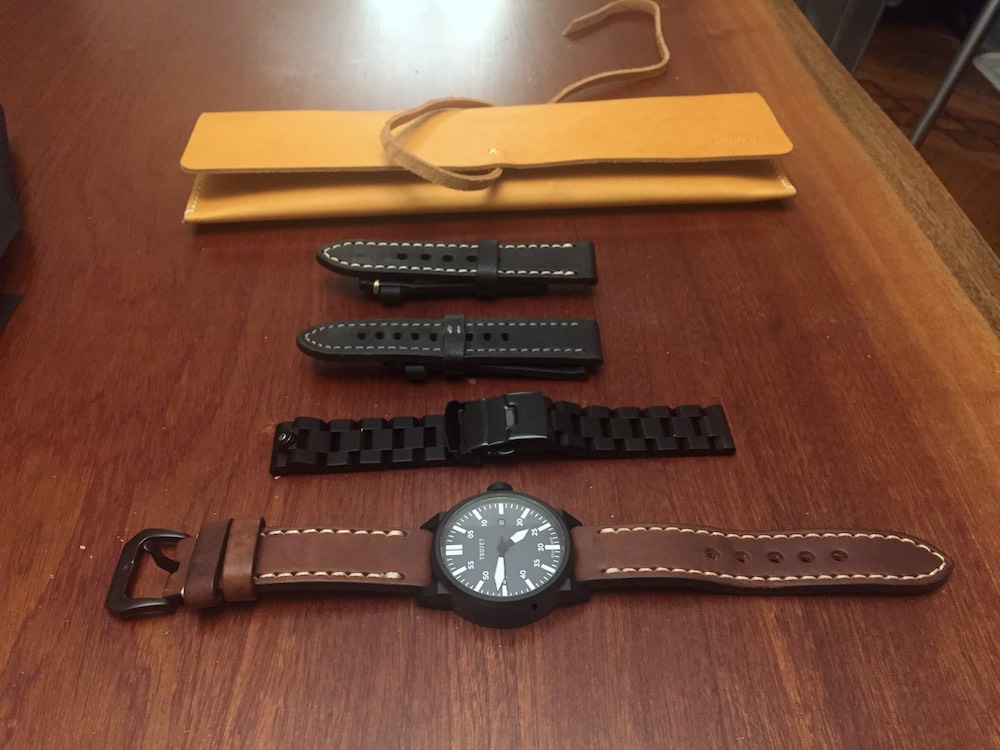 All of the specs of this watch are already described in the previous review, so I’ll just describe my experience with it during day to day regular use. I was a little concerned about the case size (44mm) being too large for my relatively thin (7″) wrist, but when I put it on, it felt quite comfortable and looked proportional on the wrist despite the large lugs and thick case. 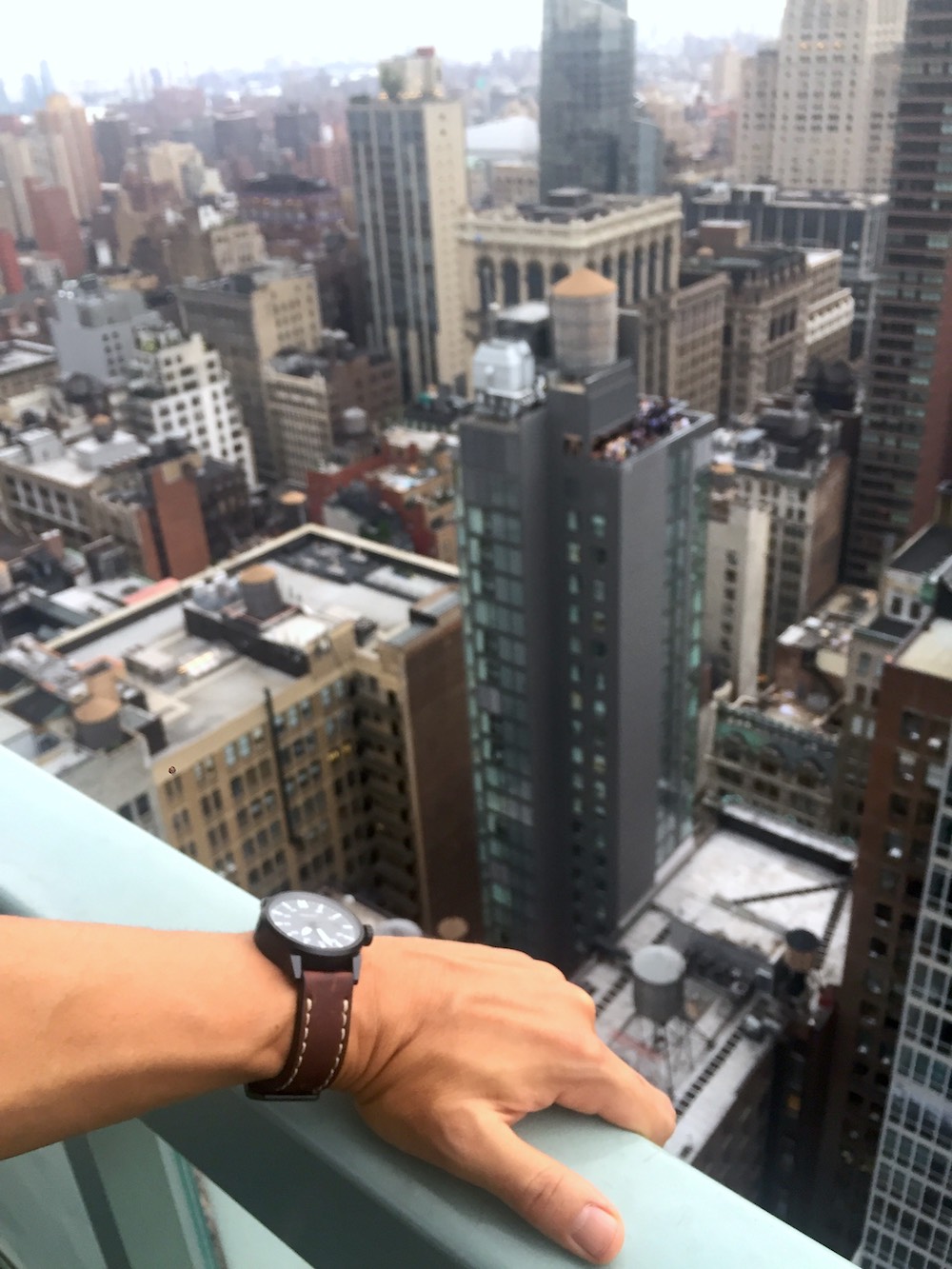 It feels solid, heavy, and durable. The leather strap is very attractive and matches the case in terms of heft and minimal industrial vibe. The brown leather was my favorite look, but unfortunately due to the wide spacing of the holes, I couldn’t find a proper fit. So I switched to the black leather strap with more closely spaced holes. I used this setup until just recently when I switched to the metal bracelet for kicks. With the leather strap, I can leave it on my wrist and play without any rattling. 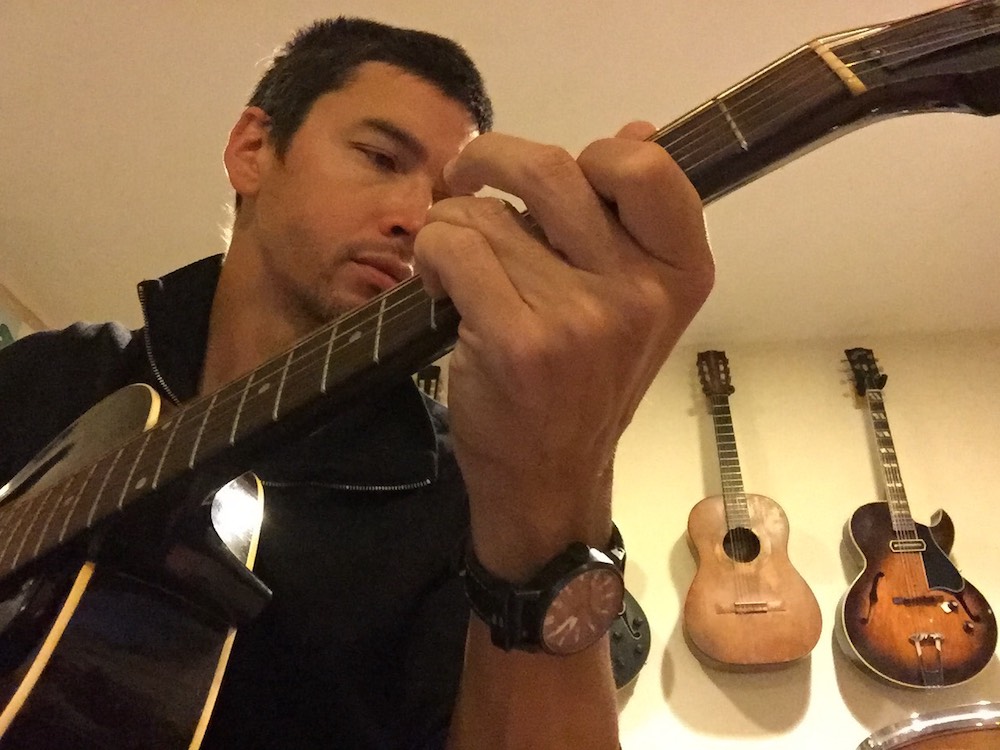 As a musician, one of the things that I need to know is when to get off stage and how the timing of a set of music is going. So I like to have the time at a glance, but not necessarily banging around on my wrist. It turns out that the Tsovet SMT-FW44 is a great stage clock off the wrist with its large minimalist display, inconspicuous case, and lume that works well when they lower the lights. Here’s a picture of it hanging on my music stand during a set at the Newport Jazz Festival in August (note that the Tsovet carrying case has also become my onstage utility bag): 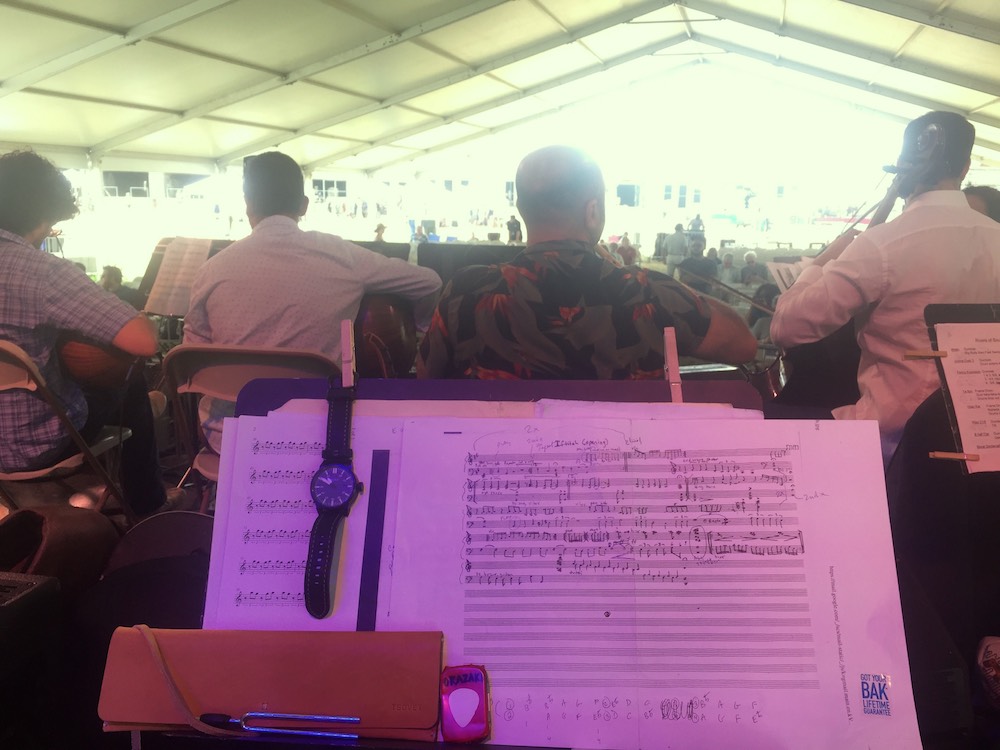 After a couple of weeks of taking the watch on and off, I decided to just leave it on day in and day out regardless of what I was doing. Summertime with the kids involved a lot of climbing stuff, swimming, bikes, and sports, while spending time where I grew up out in the Pacific Northwest. 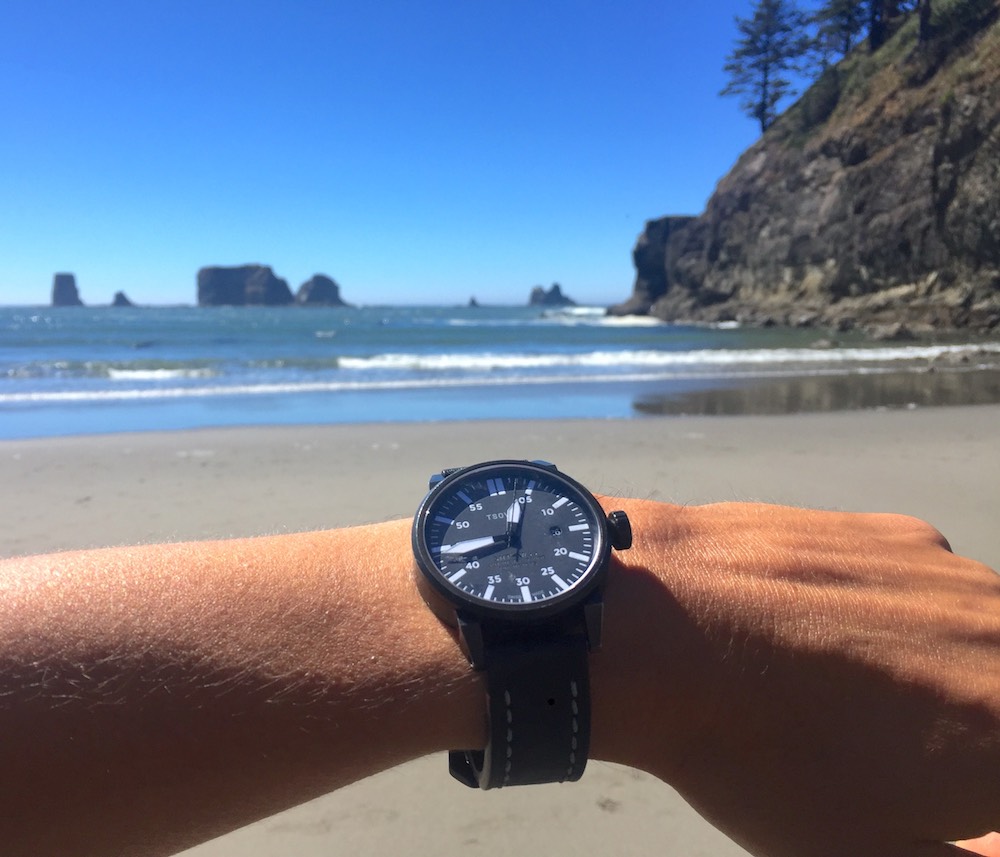 If I had paid list price, I would certainly have been fairly precious about the watch but I considered the giveaway a chance to take a beautiful timepiece and really use it the way it’s presented, as a field watch. I only adopted this attitude after I got the first scratch on the case scraping it on a rock. Rather than get bummed out, I realized that since this watch really looks like an artillery shell strapped to the wrist, I may as well let it take its natural knocks and get weathered. The matte black coating has now pretty much worn off the edges of the lugs and there are a few major scratches around the bezel. The sapphire crystal remains pristine. 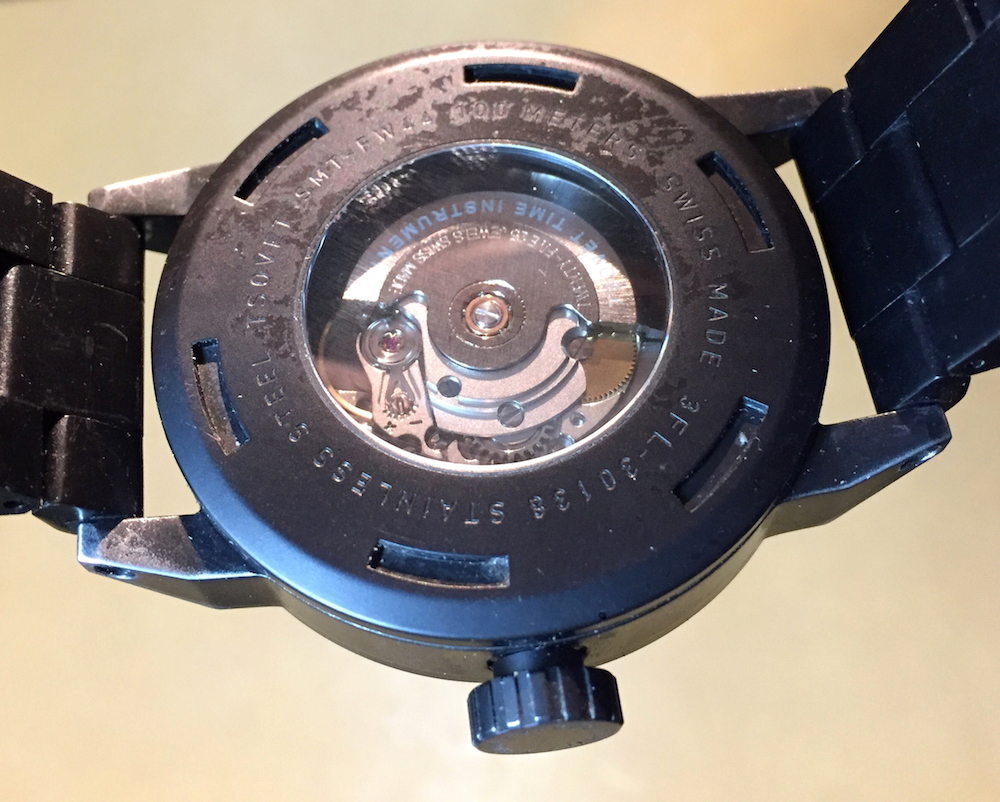 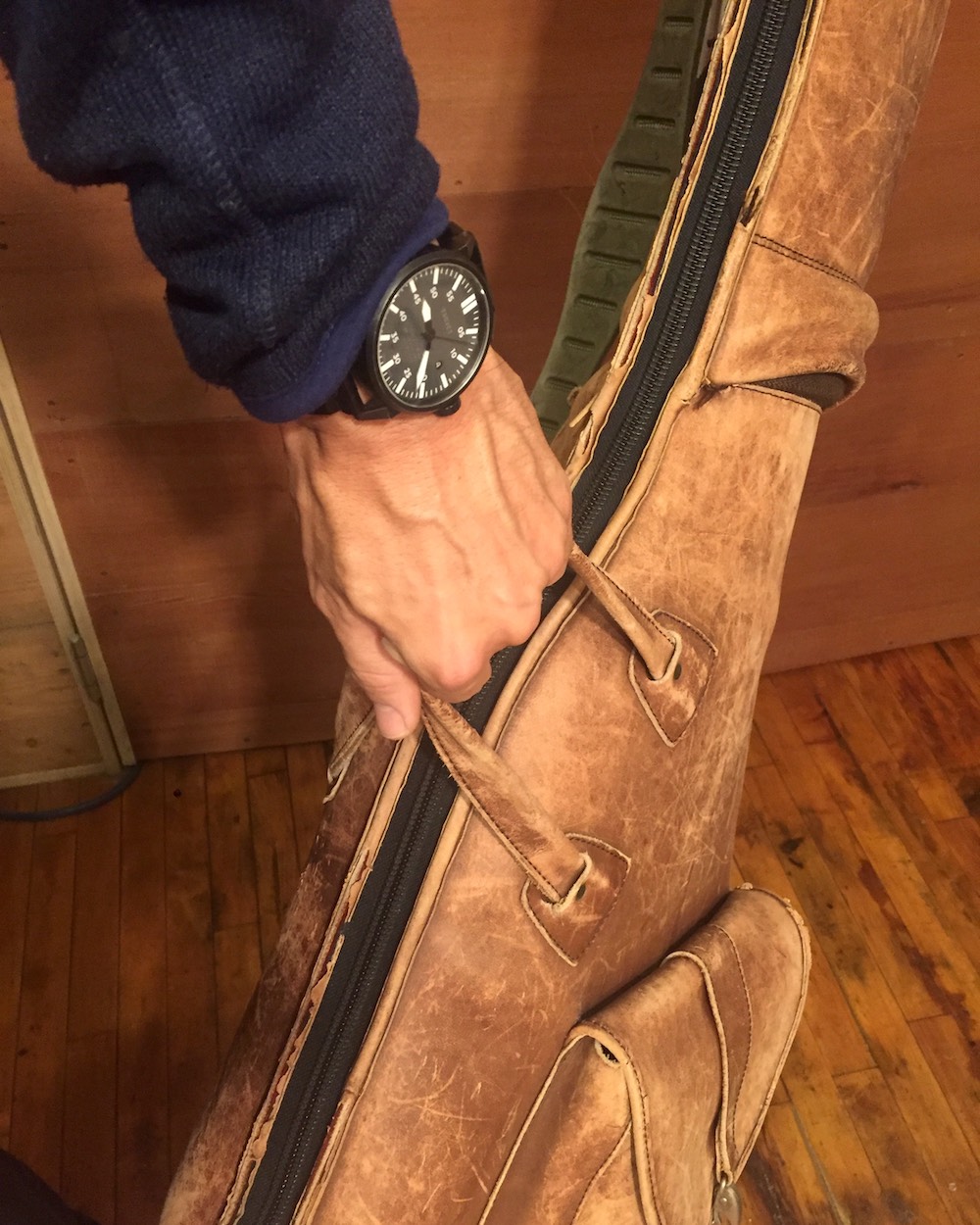 The back is losing its sheen in spots and starting to get a roughness to it. After a while, it will fit in with my prized guitar case that I’ve been carrying around for 25 years. As summer turned to fall, I began the school year (commuting from Brooklyn to the University of Michigan every couple of weeks) and went to the bracelet to change it up. It’s a substantial weight on the wrist, but feels quite comfortable and indestructible. I don’t wear a suit, so the height of the case isn’t really a problem. I haven’t calculated the accuracy of the movement, but I find that I have to set it back a couple of minutes once a week or so. No big deal because I like to mess with the crown anyway, which has a pleasing feel to it. 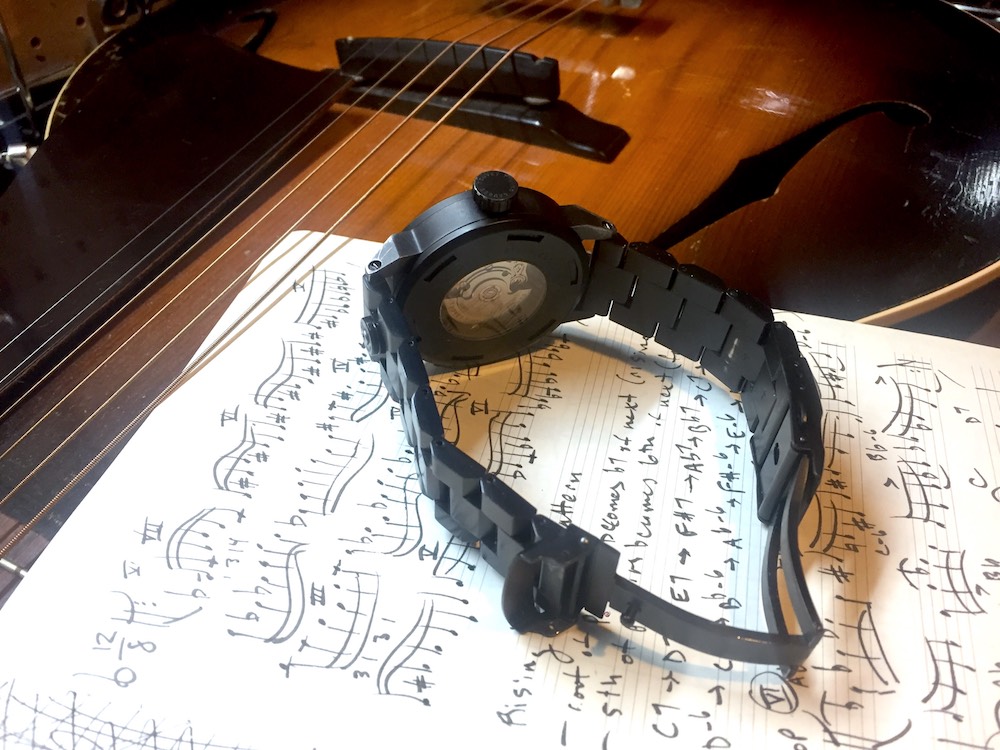 This year, the Tsovet SMT-FW44 will be with me on a lot of travel. I don’t think I would be interested in a watch that didn’t serve me well as a tool, no matter how hip the design. This watch, while quite hip to the eye, is also highly functional and useful. It feels like a gauge for a vehicle, where all ambiguity in the display is eliminated out of necessity. I guess that the purely utilitarian design could come across as a little cold or uncreative, but my impression is unpretentious and restrained. I don’t like being the loudest one in the room, so this fits my approach. All in all, as an horological novice, I can’t get too deep into the weeds with you all, but I can say that I enjoy wearing around this intricate machine that does its job and doesn’t complain. tsovet.com