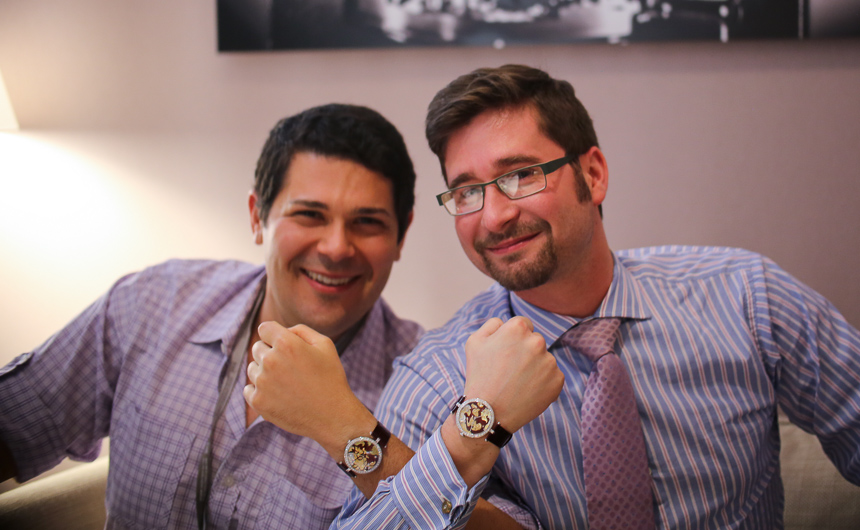 What Is SIHH? A Major Watch Industry Show & What It Means 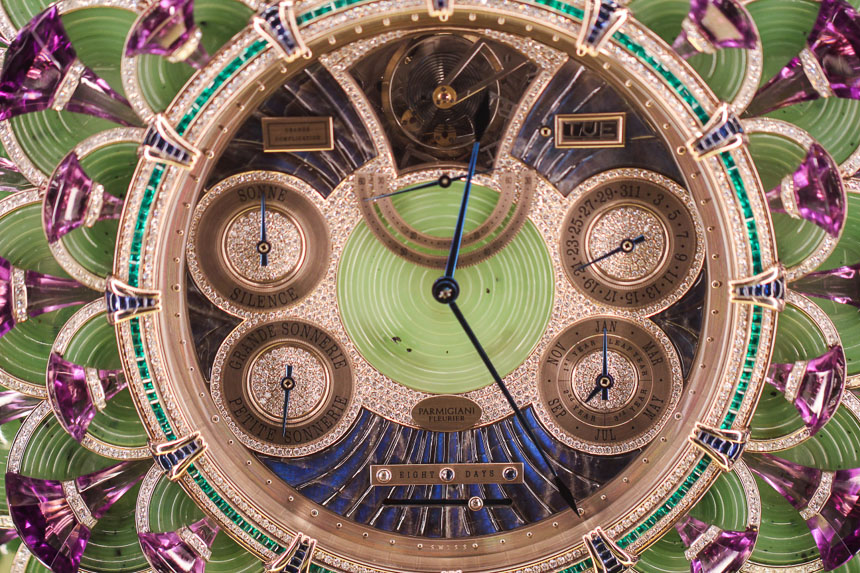 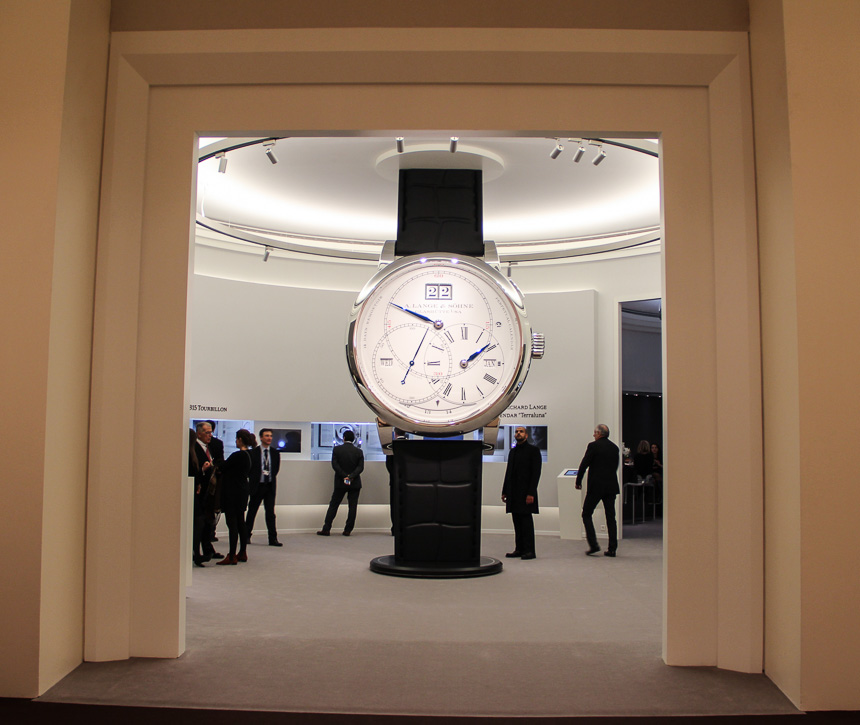 Attendees were milling about the exhibition halls decked to the nines, sporting swanky suits and probably enough precious metals to balance the budget in Greece. From what I hear, this isn’t the case in Basel, where the event is open to the public. Within the main halls, numerous cafés were operating constantly, serving complementary champagne, espresso, soft drinks and snacks (think sushi, cheeses, and gourmet finger sandwiches) for the guests. Most brands also had their own bars and food offerings within their respective booths. One of the most exciting things about the SIHH experience is the spectacle and scale of it all; from the luxury accommodations to the grand exhibition halls, the entire atmosphere of SIHH is charged with a luxury lifestyle vibe, while somehow managing to remain unpretentious. Only in Switzerland.

Within the grand exhibition halls of the Palexpo complex at which SIHH is held, each brand builds a luxurious presentation and appointment “booth”, decorated and fitted in their own unique style. Although I was no stranger to the branding or marketing initiatives from the brands in attendance, it was fascinating to see the variation of themes lined up next to one another in the facility, joined by their common group affiliation but competing with each other in their own way, eager to stand out to buyers not just in terms of their timepiece collections but in their overall presentation. 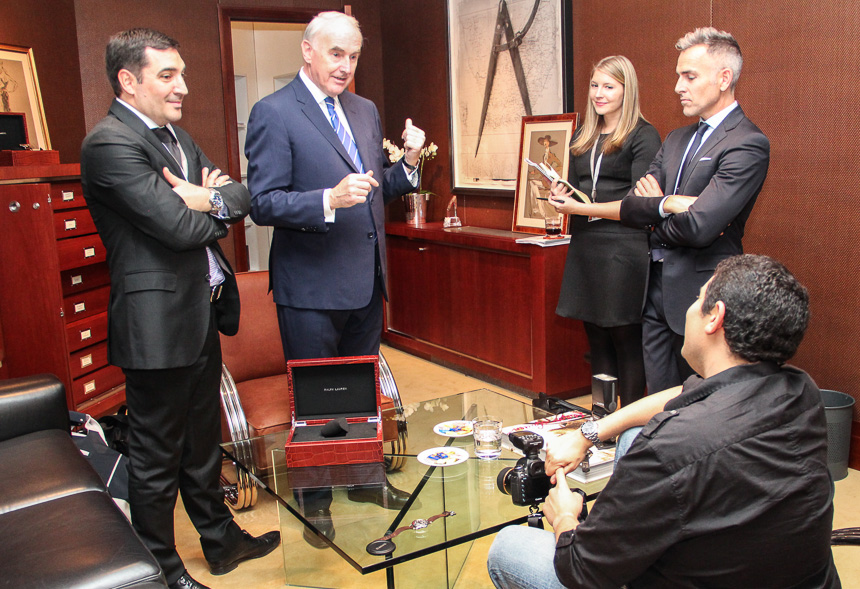 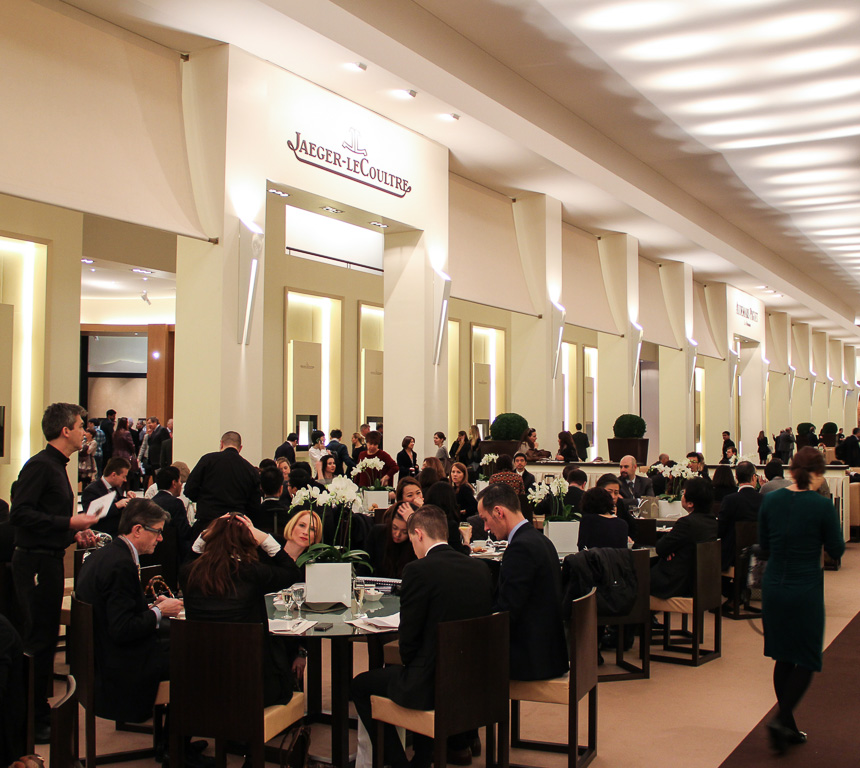 IWC’s booth, for example, was decorated in an undersea motif to commemorate the launch of their new Aquatimer collection, while Roger Dubuis’ presentation took a spin of whimsy, complete with a surreal steampunk motif and a giant cuckoo clock that drew a crowd each hour. The Ralph Lauren booth was appointed in rich leather and animal hides, whereas Panerai’s was swathed in riveted bronze paneling, each appropriately evoking their “Brand DNA”. Whatever the theme, each brand pulled out all the stops to get their point across…not something you see anywhere else.

In addition to product displays, each booth also had numerous private meeting rooms for brand representatives, sales staff, and executives to hold one-on-one sit downs and present their new collections with retailers and writers, which is where Ariel and I spent most of our time. As ABTW is somewhat of a fixture in the world of timepiece reporting, we were given additional access to get hands-on with the brand’s biggest and most important reveals in private meetings, while many outlets had to make due with seeing the collections in the regular displays. Most brands also held group press presentations throughout the show in several different languages for the worldwide audience. We tried to avoid these group presentations as they were far less conducive to getting the type of content and imagery you’ve come to expect from ABTW. With the number of attendees from both sides of the industry, limited private spaces, and even more limited timepieces to view (and in our case, photograph), scheduling at SIHH is a major undertaking, and starts several months before the show. 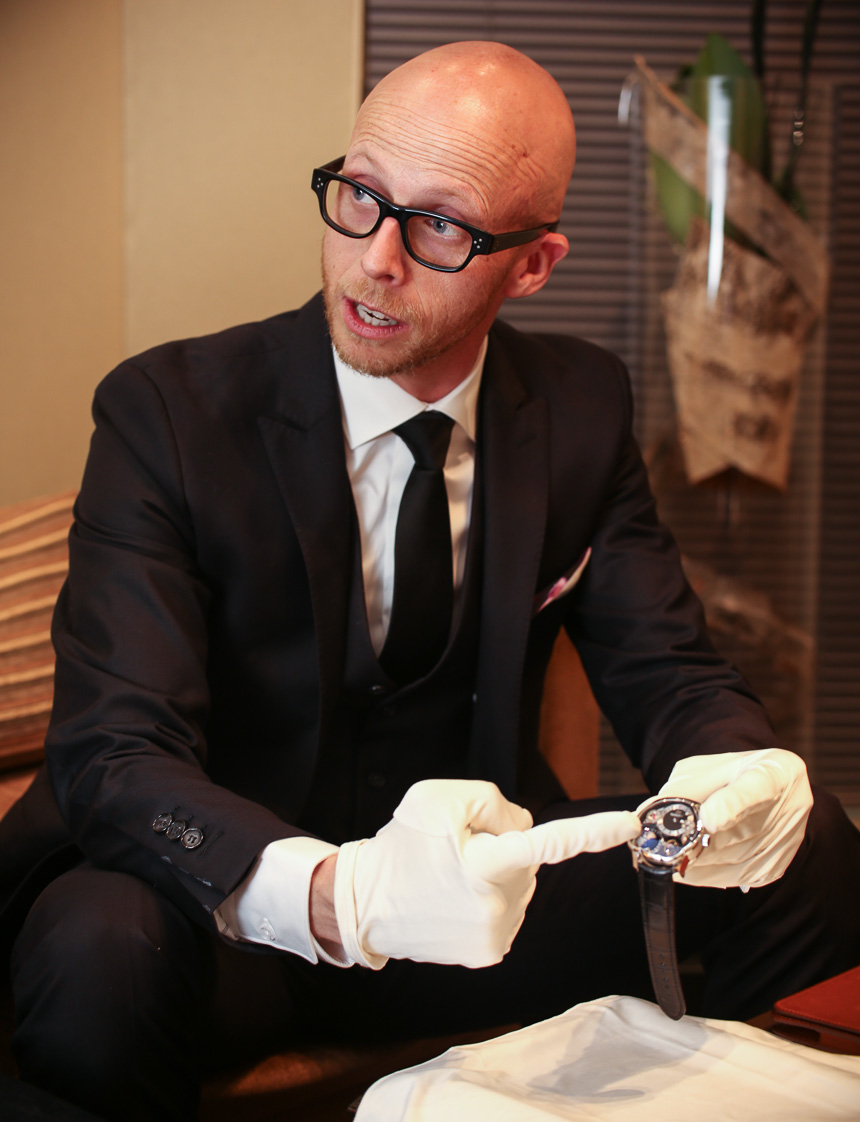 For Ariel and I, SIHH lasted from Monday morning to Wednesday evening, although we stayed on for several more days in-country to meet with other brands. To give you a bit of a rundown on how things went at the show, I’ll run you through a normal day. Each started with a quick breakfast and a shuttle ride from the hotel to the Palexpo, which for me was about 25 minutes on one of dozens of articulated buses filled with fellow writers and retailers that had been hired just for the event.

Upon arriving at the Palexpo facility, we were put through several levels of security checks before being allowed in. After being cleared, the two of us would meet up at one of the numerous cafés for a strong cup of coffee and map out our schedule. Each day we met with multiple brands, typically in back-to-back appointments that had us running from one side of the 80,000 sq. foot expo center to the other. The pace was intense, given the number of brands we were scheduled to meet with and the quantity of new timepieces we wanted to have hands-on time with.

During our appointments with the brands, we would meet with their respective PR and marketing people and view new product. Our primary goals were to get the newest and most important timepieces photographed, as time was limited and it could be months before we would get another chance for a hands-on shoot. It was an amazing experience to be amongst the first people in the world to see, handle, and wear some of these new timepieces – and although we were in a mad rush to see and shoot everything, I had to pinch myself more than once as a reminder of just how unique an experience like this was, and how fortunate I was to be able to do so in a private setting within the general madness of the event. 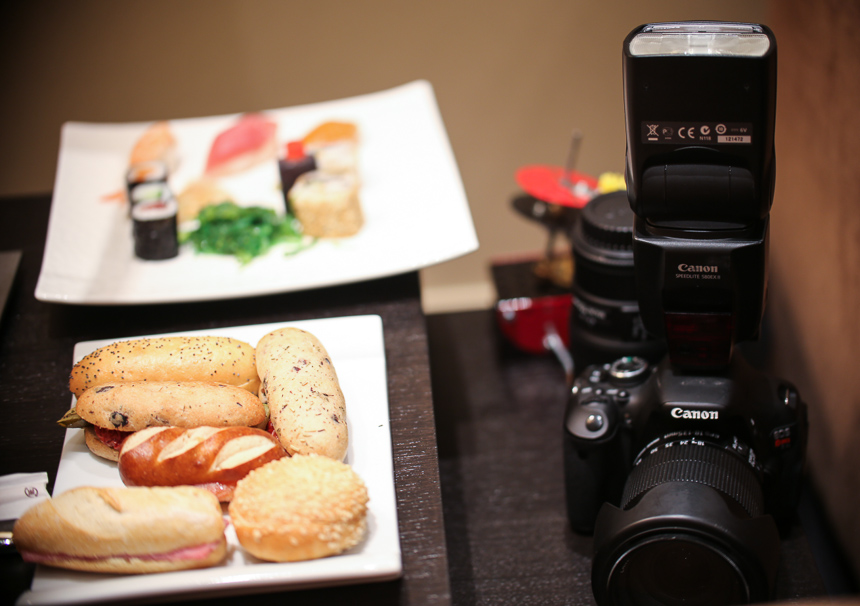 There isn’t time for team aBlogtoWatch to sit for a formal meal but the snacks at SIHH can be impressive.

The end of the show each evening didn’t mean the end of our day. Wrapping up with the brands at 6:30 or 7:00 meant on to the next thing; dinner. Each night, brands hosted retailers and writers for private dinners we had received personalized invites for in the month leading up to SIHH. In my case, I was wined and dined by Panerai on Monday night, IWC on Tuesday, and Piaget Wednesday. The Panerai and Piaget dinners were fairly intimate affairs, with only a few brand representatives and some colleagues from other publications here in the states. IWC’s dinner was another thing altogether.

Known throughout the industry for putting on a serious party each year, their event at SIHH 2014 was nothing short of a world-class spectacle. Featuring a number of A-List guests, ranging from actors Susan Sarandon and Ewan MacGregor to athletes such as Luis Figo, and racing driver Lewis Hamilton, this year’s dinner also featured a musical performance by Roger Hodgson of Supertramp fame as well as a special acrobatic exhibition by Cirque du Soleil in front of a crown of 800 guests…pretty neat stuff.

After dinner we were shuttled back to our hotel, in this case the President Wilson, a 5-Star establishment on the shores of Lake Geneva. While some writers went straight to work uploading pictures and generating copy, others enjoyed the after-hours hospitality suite in the hotel or traveled down the street to The Boat, a floating nightclub set up for SIHH attendees to indulge themselves in music, libations, and casino gambling. Again, the focus of all of this luxurious hospitality was directed to the retailers, but it was certainly appreciated by my colleagues and me, and definitely made a “work” trip anything but tedious.

The entire event is a grand affair, a mix of fashion and horology unparalleled in the industry. For me, it came and went in a blur, and I left feeling as if I saw only a tiny fraction of the sights there were to see. For many timepiece enthusiasts, the realm of the luxury wristwatch industry is greatly misunderstood, or even frowned upon. It is easy to hate on something you haven’t personally experienced, and I can’t begin to count the number of times I’ve heard things like, “I don’t understand who would spend that kind of money on a wristwatch, I don’t care what it’s made of.”

Experiencing the workings of the luxury timepiece industry from within its castle walls taught me a lot about how it operates, who “those” people are, and why they buy. While final consumers don’t get invited to SIHH, your Authorized Dealers and trusted writers are, and are given the full luxury treatment which ingrains us with an appreciation and understanding of what real luxury is all about, and which we then convey to you, either in a sales presentation or writer’s inside look. For those of you who have been to a trade show, I can assure you that SIHH is nothing like it – it operates on a different plane, one that truly absorbs all of us into the lifestyle that these luxury brands represent, and that we come away enthusiastic to share. For those of you enamored by the realm of modern horology, the luxury world is a very real and important part of it, and should be understood and embraced. After all, it is the success of the luxury brands that drives a tremendous portion of the larger timepiece industry. Personally, I would be equally comfortable geeking out over some watches with friends in an underground bar with a cheap beer in hand (no really, I do this every week in New York, if you’re in town, hit me up), but traveling to Geneva to geek out over watches with the people that make them whilst sipping fancy champagne? I could get used to that, too.