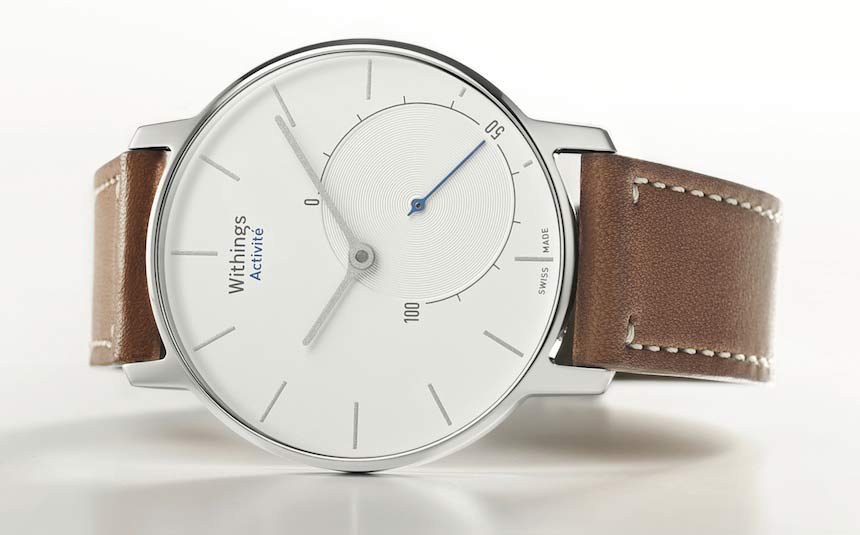 When it comes to devices to track your activity throughout the day, you’ve got quite a few different options. Some of these slip into a pocket (which is what I’ve gone with), and others go on to your wrist, much like a bracelet or, for those with a display, like a watch. Until now, however, none of these wrist-mounted fitness-focused devices have actually looked much like a watch. That changes with the Withings Activité Fitness Tracker watch.

If you didn’t know any better, you’d take a look at the Withings Activité Fitness Tracker, and think it was just another slender and simple watch, albeit one that looks to have one of the largest sub-seconds dial you’ve ever seen. In reality, that subdial is where you read out how you’re doing against your particular fitness goal. Through the accelerometer built in to the watch, you’ll have your steps tracked (walking or running), which then also leads to it calculating distance and calories burned.

After taking the first glance at the piece it should become apparent the Withings Activité Fitness Tracker itself displays no detailed information regarding our activities, other than the aforementioned percentage-scale. So how does it work then? Well, the watch comes with a complimentary app from Withings, called the Health Mate. It is this – seemingly rather detailed – app that receives all the data recorded by the Withings Activité Fitness Tracker via a low-energy consumption Bluetooth connection, with which most modern smart phones are equipped.

As pictured above, the Health Mate app compiles the data received from the watch and uses it to analyze the wearer’s daily activities. Beyond tracking the distance you covered that day on foot, it also has sleep monitoring – which I’ve found to be an interesting data point, and something I’ve not seen before – as well as swimming tracking. The latter is apparently supported with the Withings Activité Fitness Tracker watch’s claimed 50 meters of water resistance, although we would not recommend using it for diving or other more demanding underwater activities. That’s plenty of stuff for the watch to keep in mind and while it is said to switch between the different modes automatically, the wearer can also make the watch do so by tapping on the touch sensitive sapphire crystal.

That covers the rather familiar fitness tracking aspects of the Withings Activité Fitness Tracker watch. But what of the design itself? As I mentioned at the start, this is the first activity tracker in a more traditional watch format (excluding the so-called smart watches) that I’ve come across – and it really seems that they paid some attention to putting together a solid design.

This Swiss-made watch was designed by a team out of Paris (though, to my eye, it looks like something we’d see from a Danish company, or perhaps German), with the dial designed in Le Locle, Switzerland. Additionally, rather than going with some cheap no-name strap, they collaborated with the Haas tannery in France to develop a calf strap for the Withings Activité Fitness Tracker watch so as to get a quick-change strap to pair to the stainless steel case.

Much as you might expect for a watch that’s a bit more tech-oriented, this is a battery-driven movement. Surprisingly enough, it’s using standard button cells to power the watch (so no recharging) which, as per Withings’ claims, will need to be changed out after about a year. The use of these standard cells is made possible by the fact that the Withings Activité Fitness Tracker relies on the low-energy Bluetooth standard to communicate with your phone (at this time, they’re only claiming iPhone compatibility) and the Health Mate app, through which you can set your goals and silent alarms, and the like.

Available later this fall in white or black at a price of $390, this is certainly a fitness tracker that should stand out from the crowd. I personally would not opt for one, since I’ve got plenty of other watches to wear, and I’m not about to start double-wristing any time soon. For the person who doesn’t regularly wear a watch though, I could see this being a good option. It allows a sort of “stealth” addition of the fitness tracker, without calling obvious attention to it like it’s glossy, colorful brethren do. While we’re still waiting for a smart watch to show up actually looking like a watch, it seems the Withings Activité Fitness Tracker has shown it can be done – and done well. withings.com