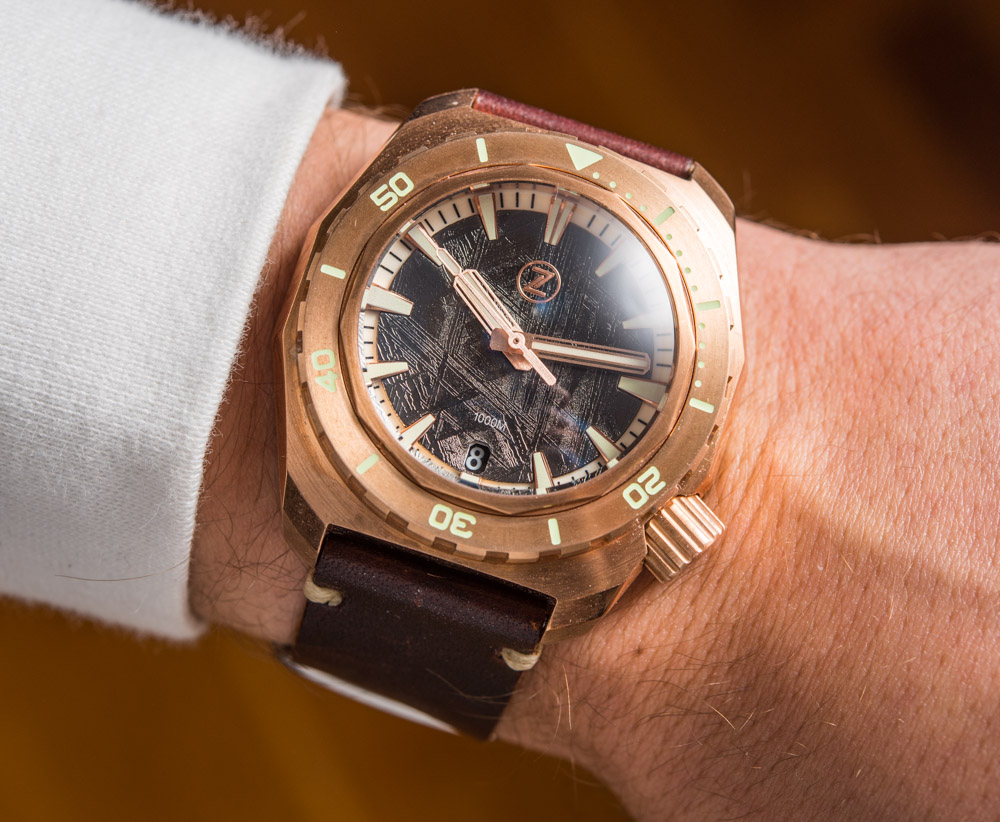 Recent years have seen the splendid rise of numerous indie watch brands based around the globe. Relative affordability, greater versatility in product design, and an improved harmony with what watch enthusiasts want as part of the very latest trends have often guided newcomer independent brands to success. The Zelos Hammerhead, a 1,000-meter diver that comes with a variety of case, dial, and bezel options and has some remarkably affordable models is the latest and greatest proof of why indie brands are so successful. On the horological map since 2014, Zelos is among the up-and-coming indie brands of the last few years with already five model lines in its portfolio (the Helmsman and Abyss divers, the Chroma and Cosmos “contemporary” watches, and the Eagle pilot watch). Zelos introduced the Hammerhead back in July in a sponsored post on aBlogtoWatch here, and you folks gave it a very (dare I say, “unusually”) warm welcome in the comments section. Now that I have the bronze case + meteorite dial combo version in hand, along with a model with a steel case, steel bracelet, and Damascus steel bezel combination, we can finally go hands-on with the Zelos Hammerhead and see if it manages to fulfill its promises. (Note that while July seems like a long time ago, that was still during the pre-order campaign, and deliveries of the first finished watches have just begun very recently – hence the “delay” in bringing you this review.) A 1,000-meter-water-resistant bronze case with a meteorite dial for under $750 in a watch that actually gets made in volume and delivered – tell me if that wasn’t a glaring niche in the market. I’ve worn bronze-cased watches for shorter periods of time and have handled many more, but this is the first time that I actually get to spend a few weeks with a watch made from this material before posting this full review.

Unless you have been living under a rock for the past few years, you’ll know that bronze has stepped up as one of the latest crazes in watch design. The reason is quite simple: bronze cases have a very unusual, warm color that for the longest time wasn’t available and that also proves to be a fantastic match with the general bulky, rugged aesthetic of dive watches (which is what it’s been primarily used for). Add to this the fact that bronze – at least the CuSn8 Marine Bronze specimen used for the majority of bronze-cased watches – promises to develop “a unique patina” that both sounds and looks cool and also allows one to possibly be fascinated by his/her watch for a more extended period of time as its color and surface sort of mutate gradually. We have seen Tudor (hands-on here), Bell & Ross (hands-on here), Panerai (recent hands-on here), and even IWC (hands-on here) debut bronze cased editions of some of their most iconic watches – and while they have been admittedly cool, I personally have been wary of how both a luxury watch’s actual and aesthetic values would change as it turns into God knows what hue of green or brown. The concept of a bronze cased dive watch has long fascinated me, but I’d much prefer to start off my adventures with it with absolutely zero remorse about its (let’s face it: highly likely) depreciation down the road.

The Zelos Hammerhead might just be what I, and many of you, have been waiting for, as it combines a Marine Bronze case with relative affordability and a design interesting enough to actually want to wear and fiddle with. At last, with the “bronze concept” now out of the way, let’s look at the finer details of this specific watch. The Zelos Hammerhead’s cushion-shaped case measures 44mm wide and a very wearable 49mm from lug-to-lug, keeping it in line with the last couple of years’ trends when it comes to dive watches. Not only the choice of material, but the overall design is also not of your typical off-the-shelf variety. It all feels and looks very masculine, as the angular design and deep color of the bronze render it a sea- and adventure-worthy piece. All this ruggedness fails to compromise finer details, though, with my favorite being the case profile’s more unusual horizontal split achieved by a highly polished upper segment and what appears to be a lightly brushed, or more of a satin-finished, lower half. This little trick does wonders in hiding the massive 17mm thickness of the case which is as thick as chunky 44mm divers can get… even if the heavily domed crystal takes up 2.5mm of this stocky figure. The Zelos Hammerhead is short from lug to lug and stands tall from the wrist, making for a rugged, chunky appearance that somehow still manages to look sufficiently proportionate. It’s here where we should again note the admirable 1,000m water resistance… and mention that the Zelos Hammerhead possibly could have been as striking as it is now had it come with, say, 200m or 300m of water-resistance along with a case that is 3-4 millimeters thinner. Zelos say they have plans for a 300m diver so we might see something thinner in the future. The cases have been machined with impressive enough detailing (for the price segment) with even the more complex areas, like the underside of the case around the crown and lug in one corner showing sharp execution. Unlike many other watches in this segment, the case itself lacks annoyingly sharp edges – which is a relief – though it has to be said that the notches of the bronze bezel and crown should ideally feel a bit smoother to the touch. The edges of the case’s polished and brushed lines appear sharp to the naked eye while the lumed elements of the bezel and crown (more on lume a bit later on) also display an acceptable quality of execution. The bronze-cased version of the Zelos Hammerhead you can have in four different variants, either with a grey, blue, or meteorite dial (all three with a full bronze, lumed bezel), or with a black dial accompanied by a black ceramic bezel insert (also lumed). The piece we are looking at comes with the 120-click, full bronze bezel that also happens to have a dodecagonal insert in the middle, hugging the heavily domed sapphire crystal in its center. It is a small detail that tends to blend into the greater picture but that actually also adds a lot to the overall design. The front sapphire crystal, just like the base cushion shape of the case, is a nod towards vintage, 1970s divers that vaguely inspired the design of the Zelos Hammerhead; and while sapphire crystal as a material is not as historically accurate as an acrylic front element, its much superior scratch resistance is a most welcome feature. Although the anti-reflective coating is barely okay – such heavily domed crystals will always reflect a lot more than more flat cut ones – thanks to the design of the hands and indices, there has never been one instance when I couldn’t tell the time with ease. Speaking of hands and indices, they follow suit and sport a highly unusual design: while the former do remind me of the handset of certain Royal Oak models, their skeletonized, extremely thin outer edges help not only add visual interest but also improve the hands’ contrast against the dark dial dramatically. A very elegant choice of design for the hands, something many major brands could learn from – kudos to Zelos for these. I sometimes wonder why the design sported by the indices isn’t more popular. Just look at the dial from a steep angle (worry not, both sides of the the crystal are domed, aiding legibility from steep viewing angles) and you’ll see how the heavily lumed indices are not flat but rather appear to have a triangular profile, adding a lot to the depth and three-dimensional look of the watch’s face. Cutting to the chase at last, let’s talk about that meteorite dial now. Crafted from pieces of the Muonionalusta meteorite which was found in Sweden and landed over a million years ago, this dark gray, often glossy black-looking dial features what is an always unique pattern of thinner and thicker, pretty much exclusively straight lines that adorn its surface. If the deep, often iridescent hue of the bronze case and the unusual design of the hands and indices wasn’t enough, this dial seals the deal and renders the Zelos Hammerhead a watch that will remain visually interesting for a long period of time.