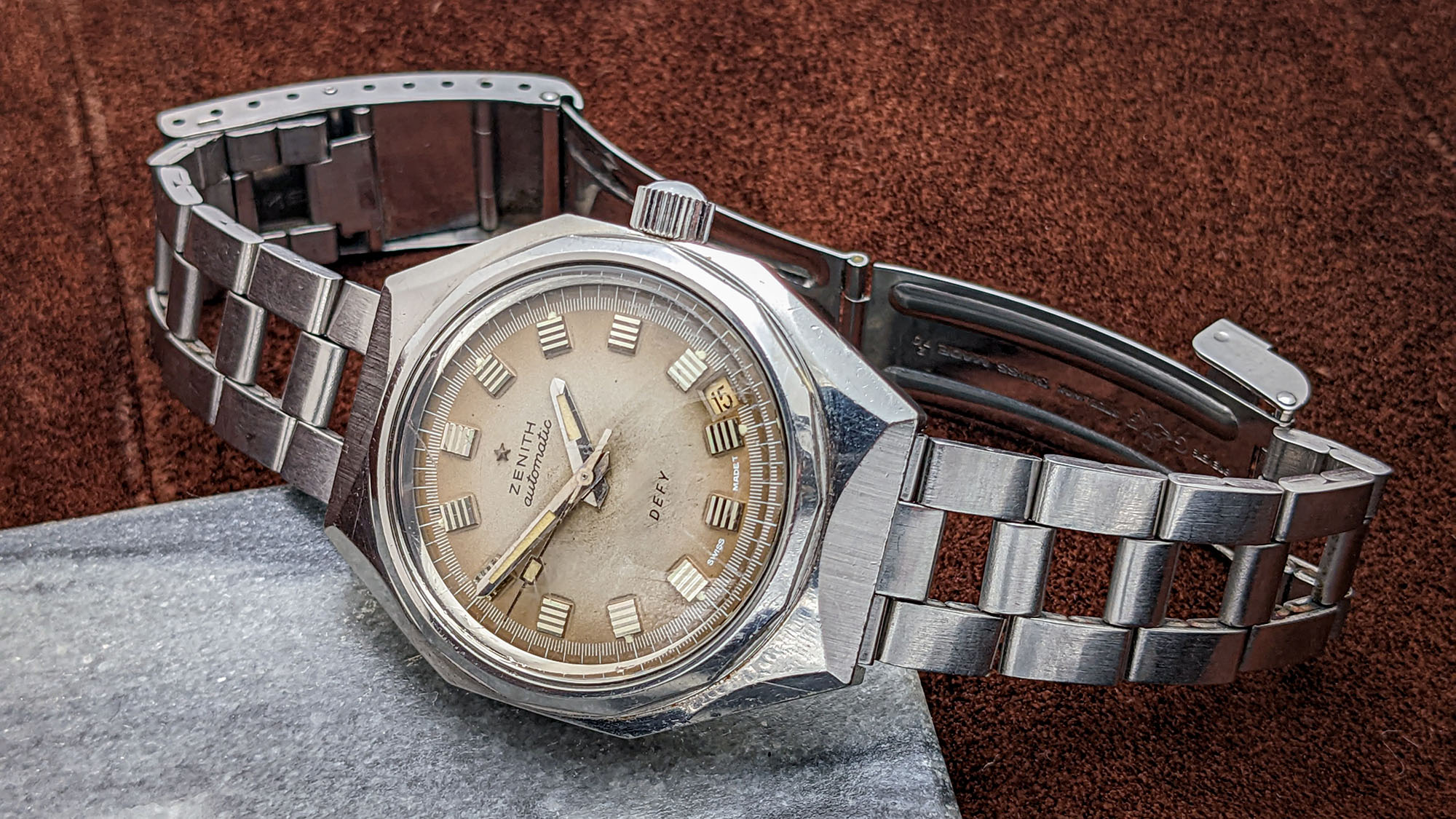 Time Machines: Tracing The Predecessors Of Integrated-Bracelet Design With The Zenith Defy A3642 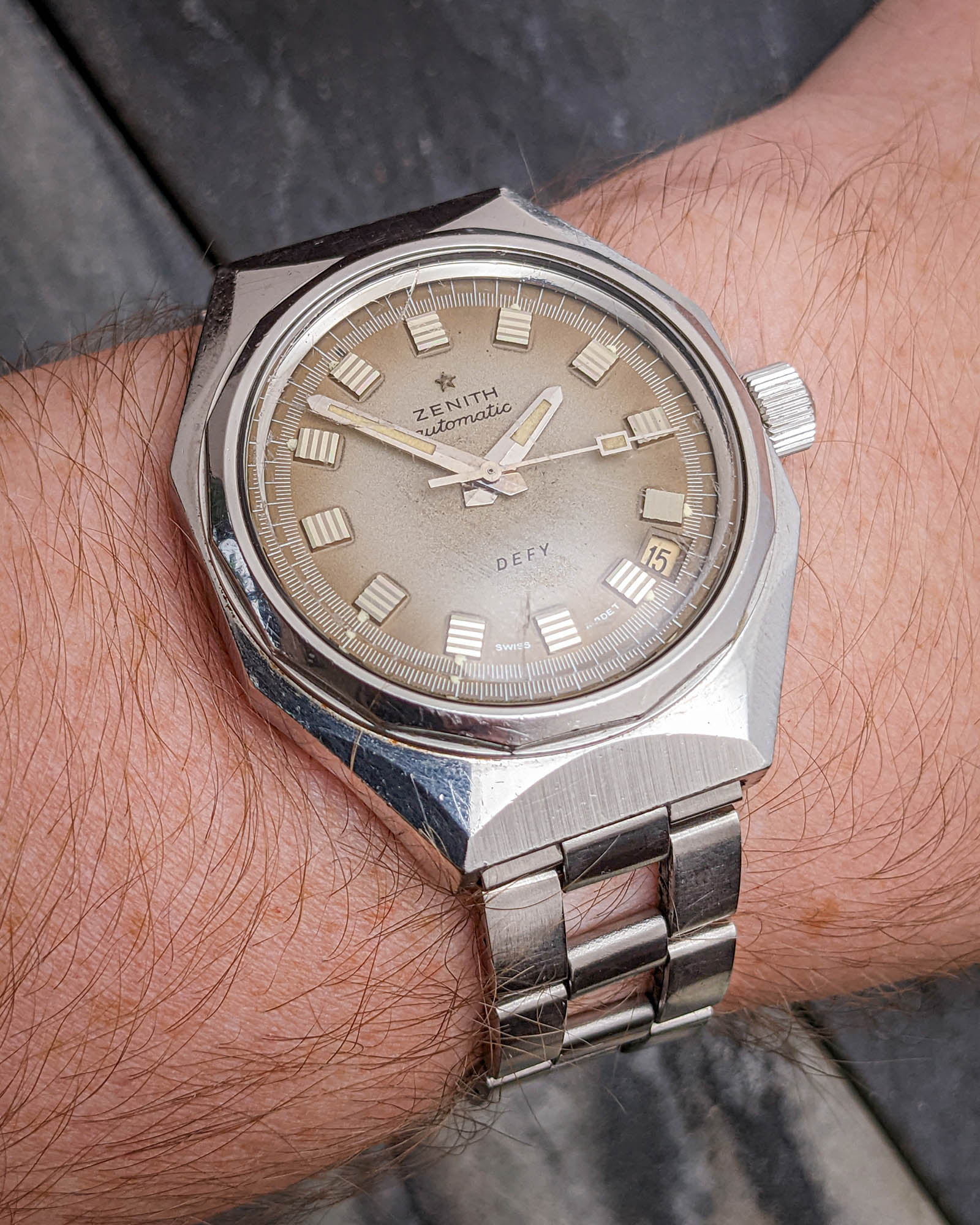 There is no hotter trend in the current watch industry landscape than the integrated bracelet sports watch. Brands from Timex to Patek Philippe have put their stamp on the idea of the holistically designed stainless steel “bracelet watch,” and with coveted examples regularly trading for far above MSRP, the effect these watches have had on the enthusiast community is undeniable. Conventional wisdom places the birth of this phenomenon on the Audemars Piguet Royal Oak, birthed by designer Gérald Genta in 1972 as a deliberately ultra-luxurious counter to the flood of affordable quartz timepieces decimating the traditional mechanical watch industry at the time. Although Genta is rightly heralded as a genius in enthusiast circles however, the ideas behind the integrated bracelet look almost certainly did not arise in a vacuum. With this in mind, while the Royal Oak holds the title as the first true integrated sports watch, that fan-favorite design has ancestors of its own. Perhaps the strongest candidate for an antecedent to the integrated bracelet design movement is this original 1969 Zenith Defy A3642. With its strong octagonal case design, multi-sided bezel, faceted finishing, emphasis on sporty durability, and, of course, a distinctive bracelet design, the Zenith Defy A3642 arguably acts as a “Version 0.5” for the integrated bracelet genre that arose in the ‘70s. 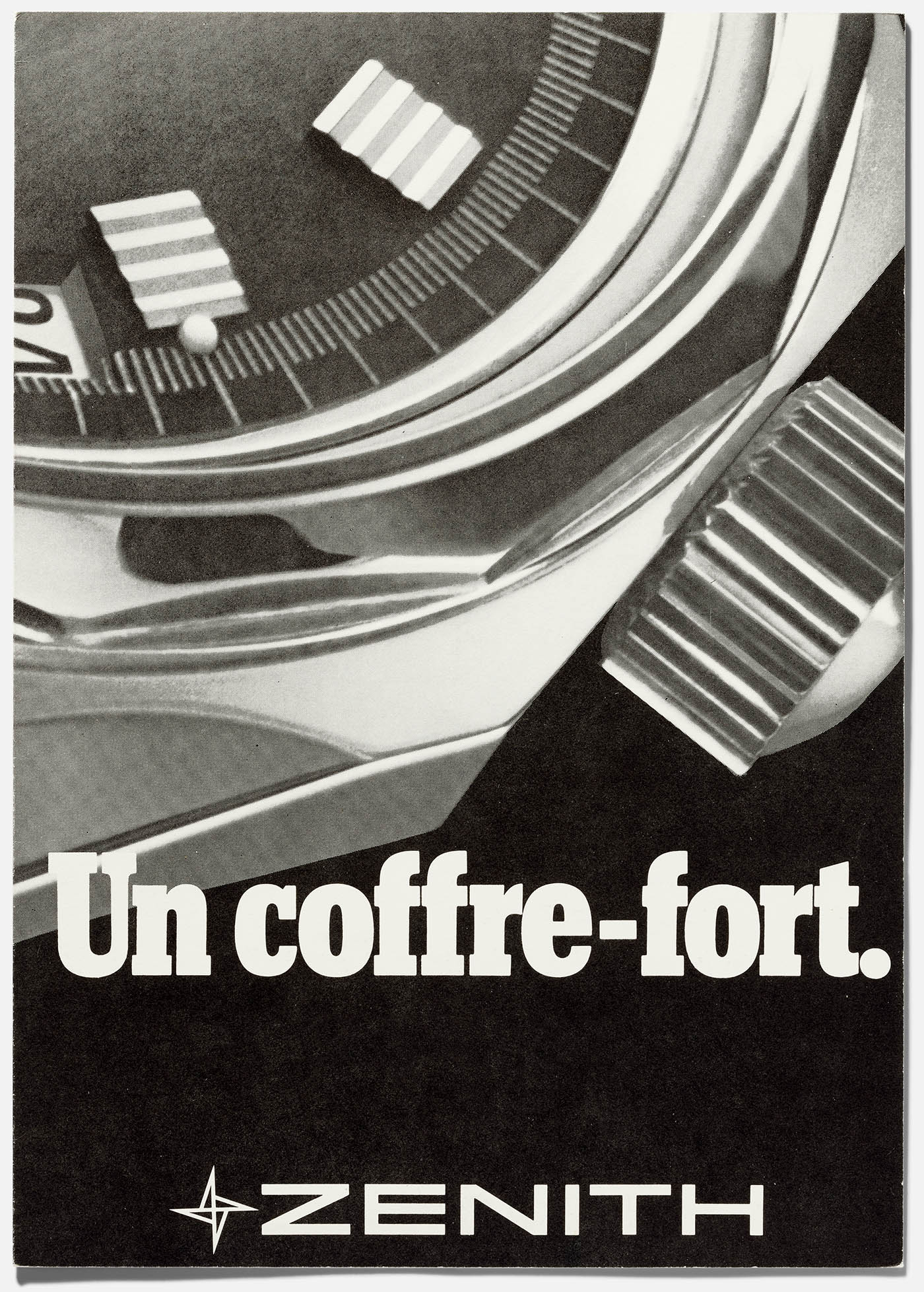 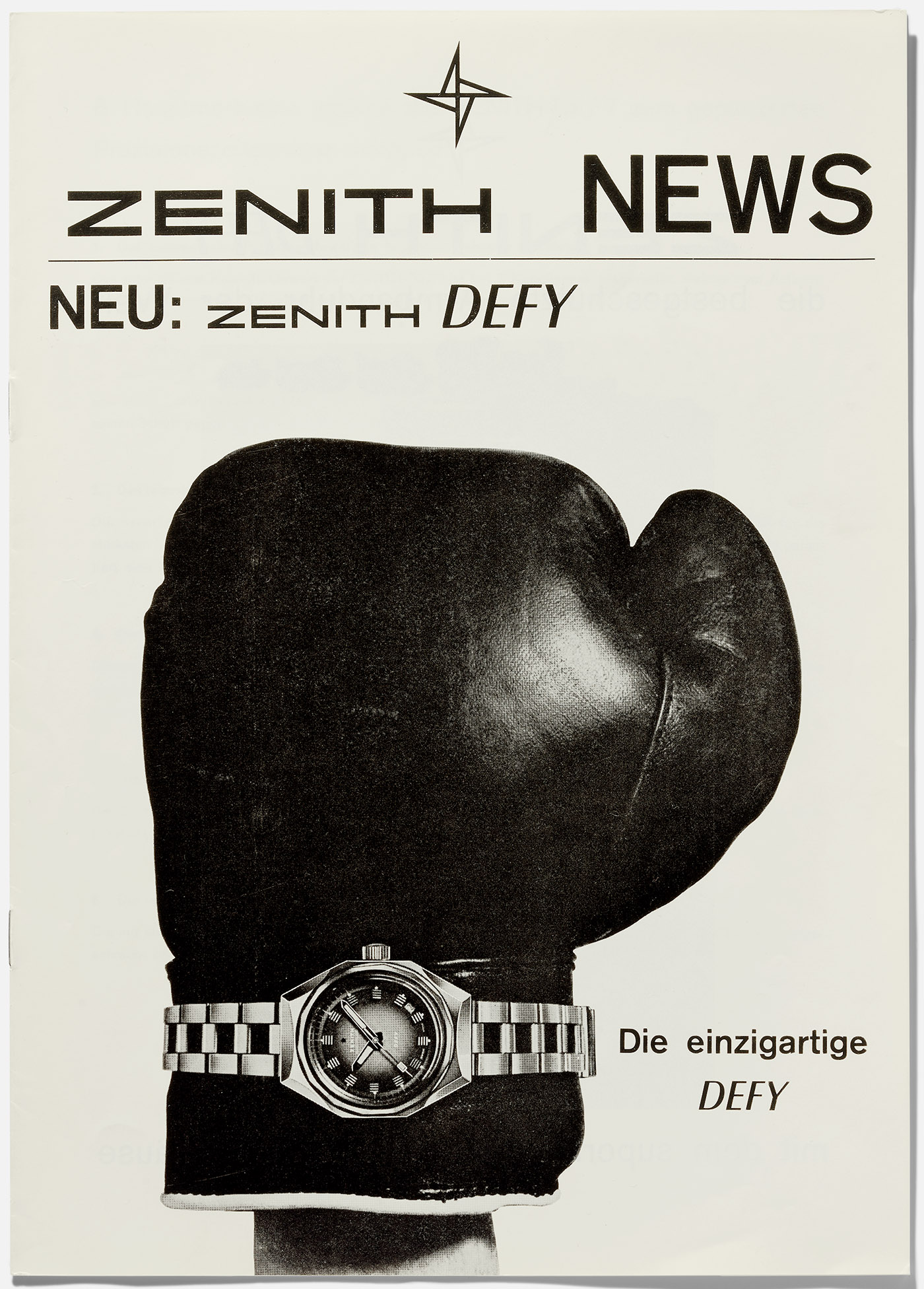 1969 was a watershed year for both the watch industry at large and Zenith in particular. In the course of a year, the world witnessed the first-ever automatic chronograph, the first commercially available quartz watch, and the beginning of the end for much of the traditional Swiss cottage industry. While much of Zenith’s own focus for 1969 centered around the pioneering El Primero automatic chronograph line, the Defy series was launched the same year and carries a quieter, but arguably no less significant influence on the world of watchmaking. The previous decade had been a relatively conservative time for Zenith, but as the brand’s design team prepared to face the ‘70s it looked to shake its risk-averse image and plant itself firmly as an innovator – and the new “Defy” nameplate seemed to encapsulate this expectation-shattering new approach. The new series carried a twin focus on elegance and extreme durability, combining its intricately finished case and stylized dial with heavy shock resistance and a hefty 300 meters of water resistance. This new series was to be an iron fist in a velvet glove, and the brand’s initial advertising push puts that philosophy in the spotlight. Print advertisements describe the Defy A3642 as a “bank vault,” a “time-safe,” and feature the watch draped over a boxing glove (Patek Philippe would later take a similar, but more upscale approach to advertising the integrated-bracelet Nautilus, pairing the watch with a finely decorated rapier). The Defy A3642 also marks one of the first non-diver designs to feature this sort of dive-ready water resistance, paving the way for the more generally sporting integrated designs of the ‘70s. 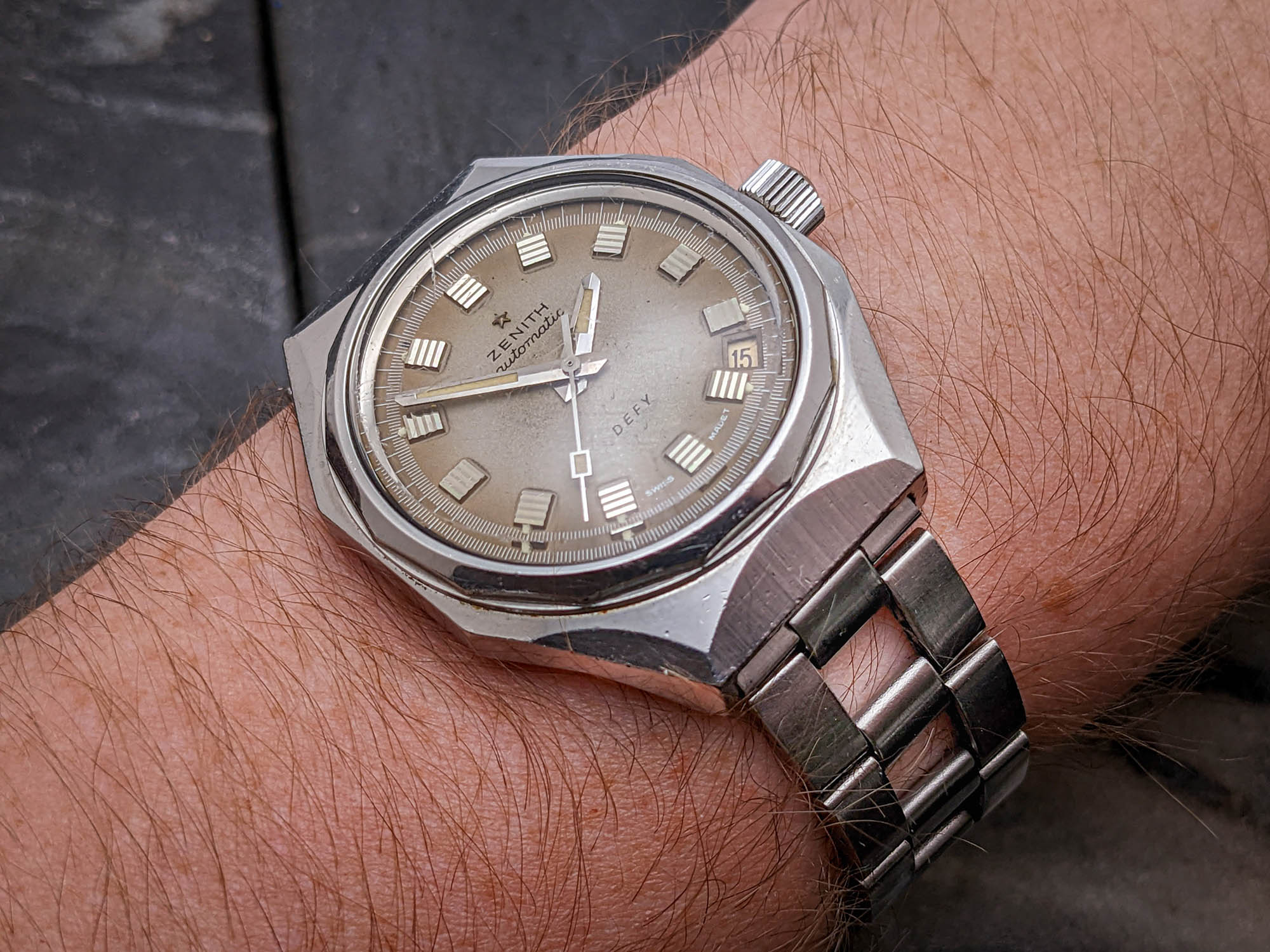 Although the 37mm-wide, 45mm lug-to-lug stainless steel case of the Zenith Defy A3642 may seem compact on paper, the sharply faceted and brightly polished shape gives it an outsize character on the wrist. The main case shape is octagonal, with hooded lugs and razor-sharp, chamferless transitions between facets. Zenith gives this geometric form both definition and brilliant interaction with changing light through a series of six rounded cutouts. These semicircular bevels help to define the tapering of the case into the hooded lugs while acting like the facets on a gemstone to reflect light from nearly any angle. Although strictly speaking, the lugs of the Defy A3642 are hooded and not fully integrated, Zenith lays the groundwork for continuing the bracelet into the case body through the use of clever finishing. Nearly the entire main case is polished, with the exception of the rounded segments at 6 o’clock and 12 o’clock covering the lugs. These sections continue the strong vertical brushing of the bracelet, creating an implied visual transition between the two elements. 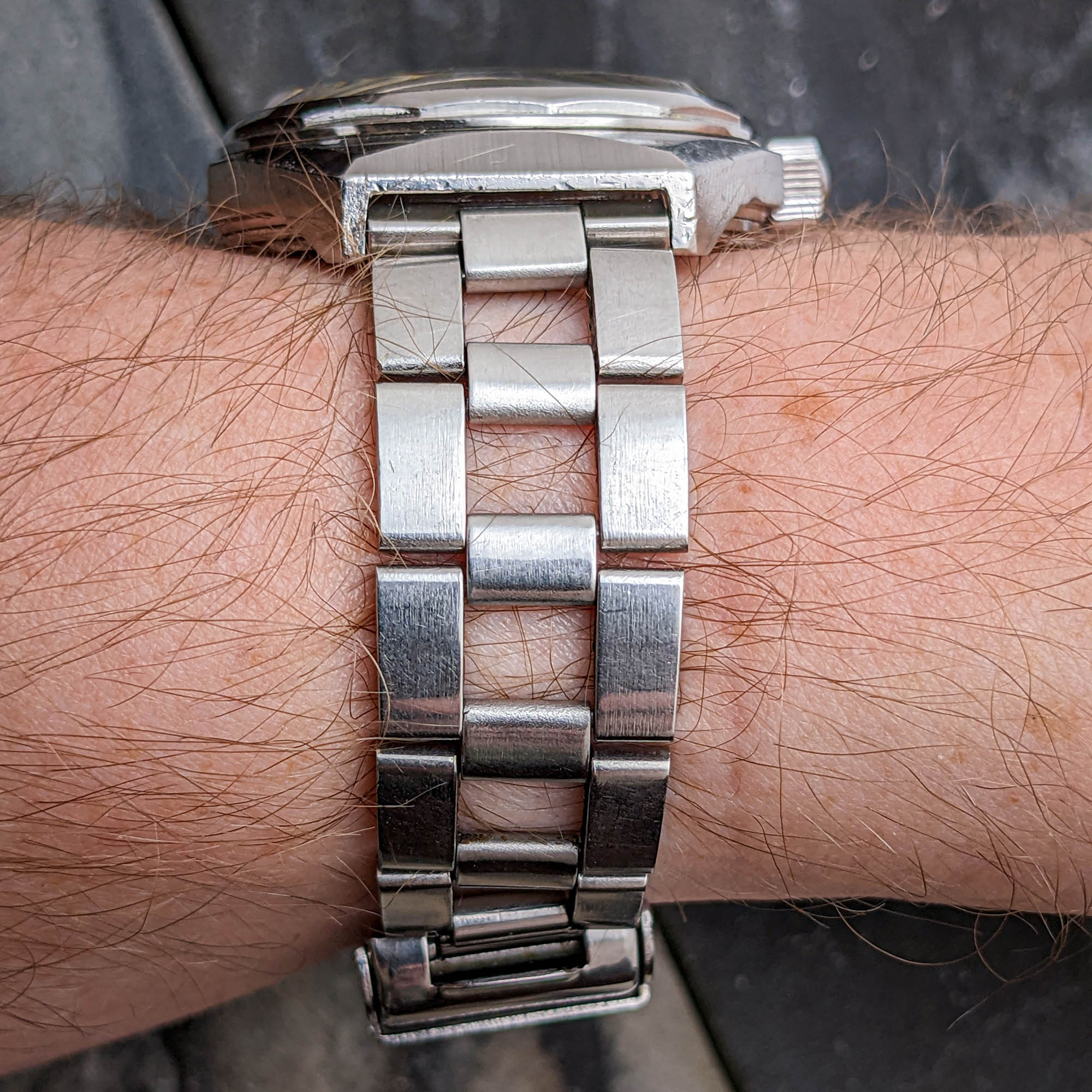 Speaking of the bracelet itself, Zenith worked extensively with Swiss bracelet expert Gay Frères during this time, and the Gay Frères ladder bracelet remains one of the brand’s most enduring designs. By allowing large, deliberate gaps between the links, the ladder design is light, breathable, and flexible on the wrist, as well as instantly recognizable. The Defy A3642 adds a flip-out diver’s extension to this bracelet layout as well, further emphasizing the importance of its heavy-duty water resistance. The Defy A3642 is topped with a narrow, 14-sided polished sloping bezel. Although the decision to use 14 sides is somewhat unorthodox, relating neither to the eight sides of the case nor the 12 hour markers, the sharp faceting here further solidifies the Defy A3642’s bright and attention-seeking character on the wrist. 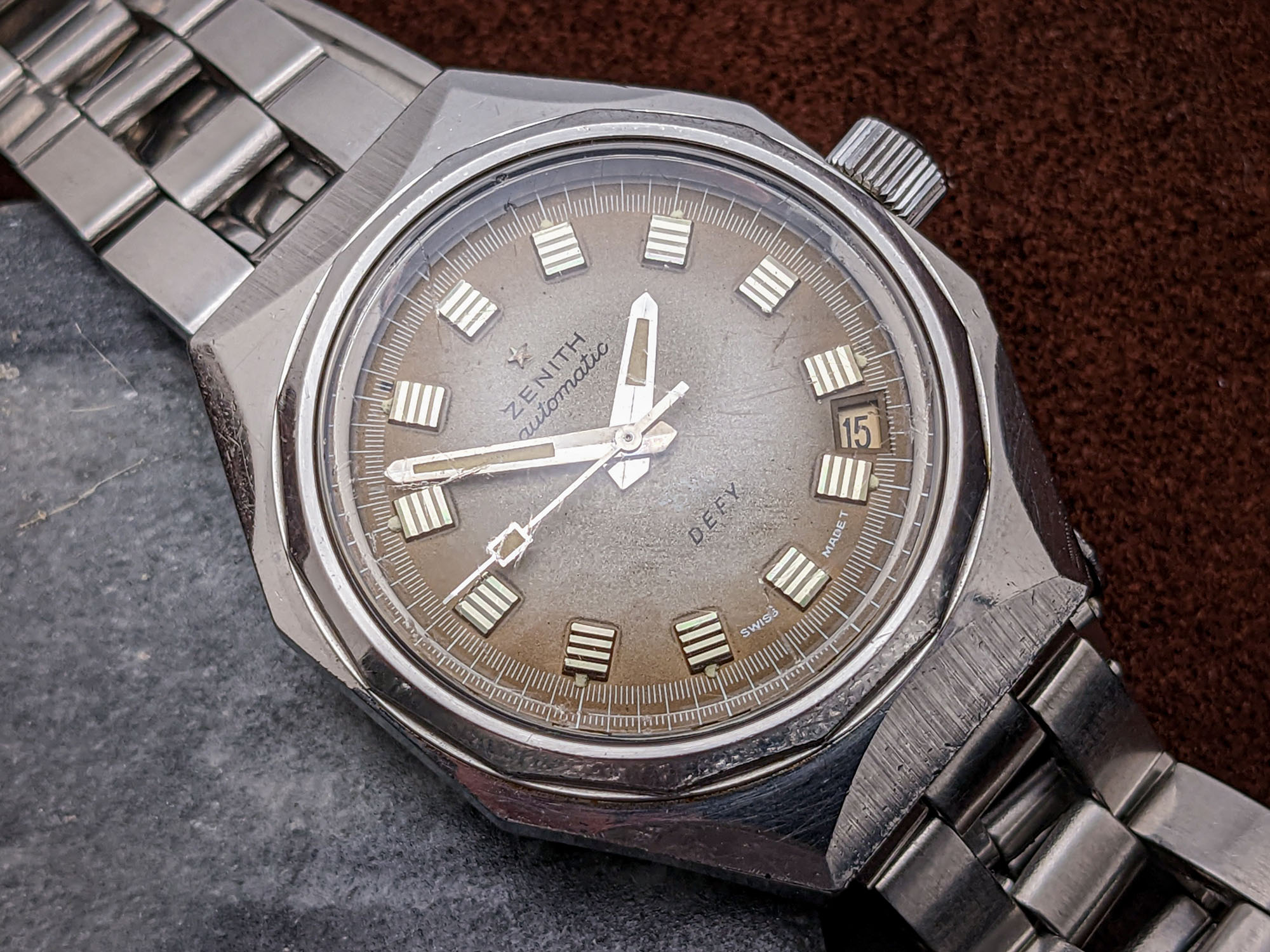 Zenith’s dedication to sharp, light-catching facets extends to the Defy A3642’s dial. Each of the applied rectangular indices is fully polished and topped with a series of four angular ridges. The shape of these ridges helps to ensure that at least one marker is catching the light at any given time, while another is casting dramatic shadows. The broad, athletic dauphine handset continues this philosophy, with mirror polishing and faceted center lines. The matte main dial surface is a late ‘60s Zenith hallmark, echoing the same smoky brown dégradé pattern as the famous El Primero A385. Although this particular example bears the scars of over half a century of honest wear, the dial still presents this rich, nuanced transition handsomely, moving from creamy off-white at its lightest point to a blend of café latte and smoke at its outer edge. Like the El Primero line, the Defy A3642 also sports a cutout 4:30 date window, but years of patina on this example have aged the date wheel to a warm tan, handsomely complementing the dial surface and the aged tritium lume. 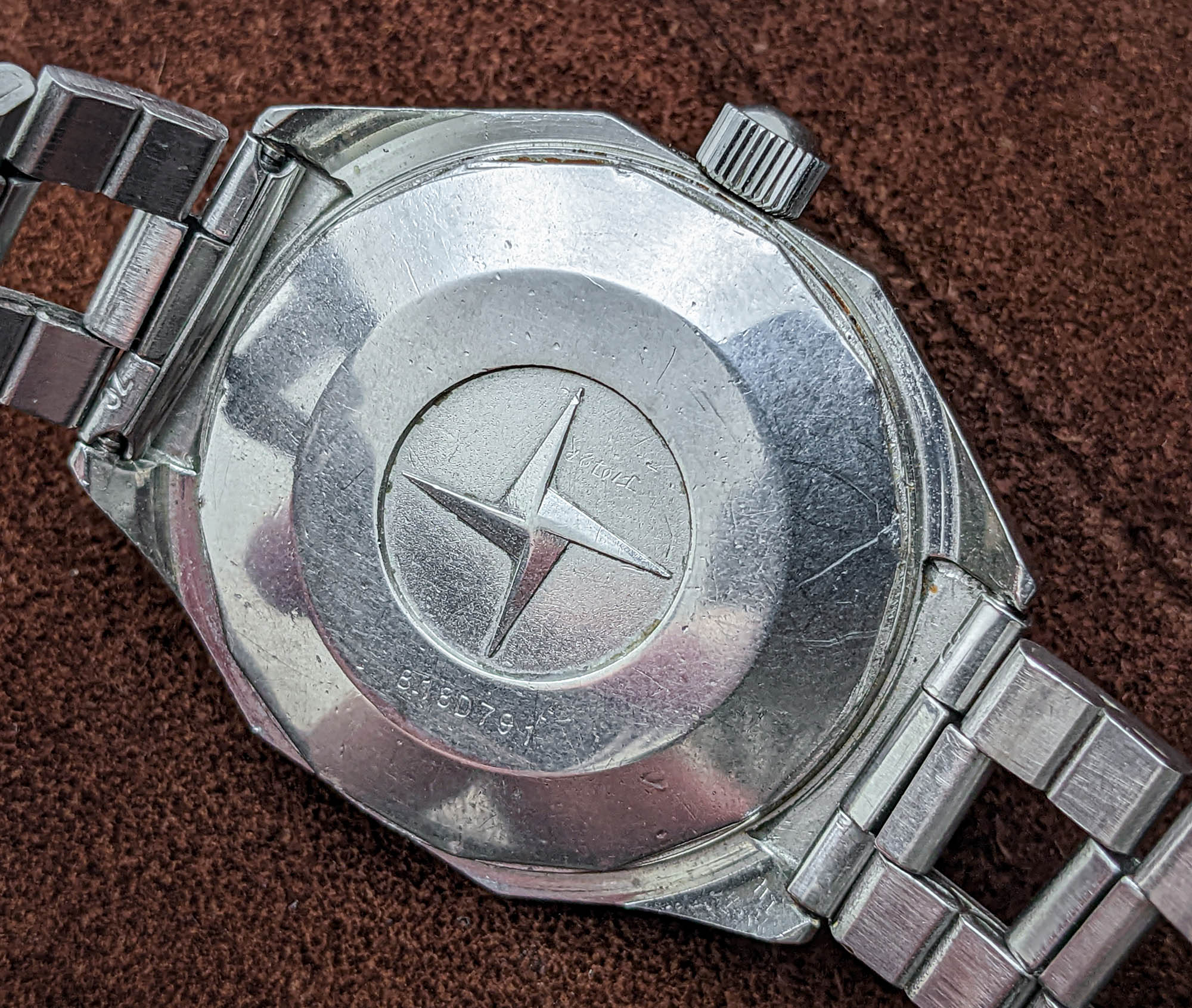 Like all early production Defy models, the Zenith Defy A3642 uses the in-house Caliber 2552PC automatic movement. For its time, the 2552PC was a durable, high-performance powerplant, offering 46 hours of power reserve at a 21,600 bph beat rate alongside robust shock resistance. Later examples would move to the higher-frequency Calibre 2562, keeping the series near the forefront of sports watch performance in the era. 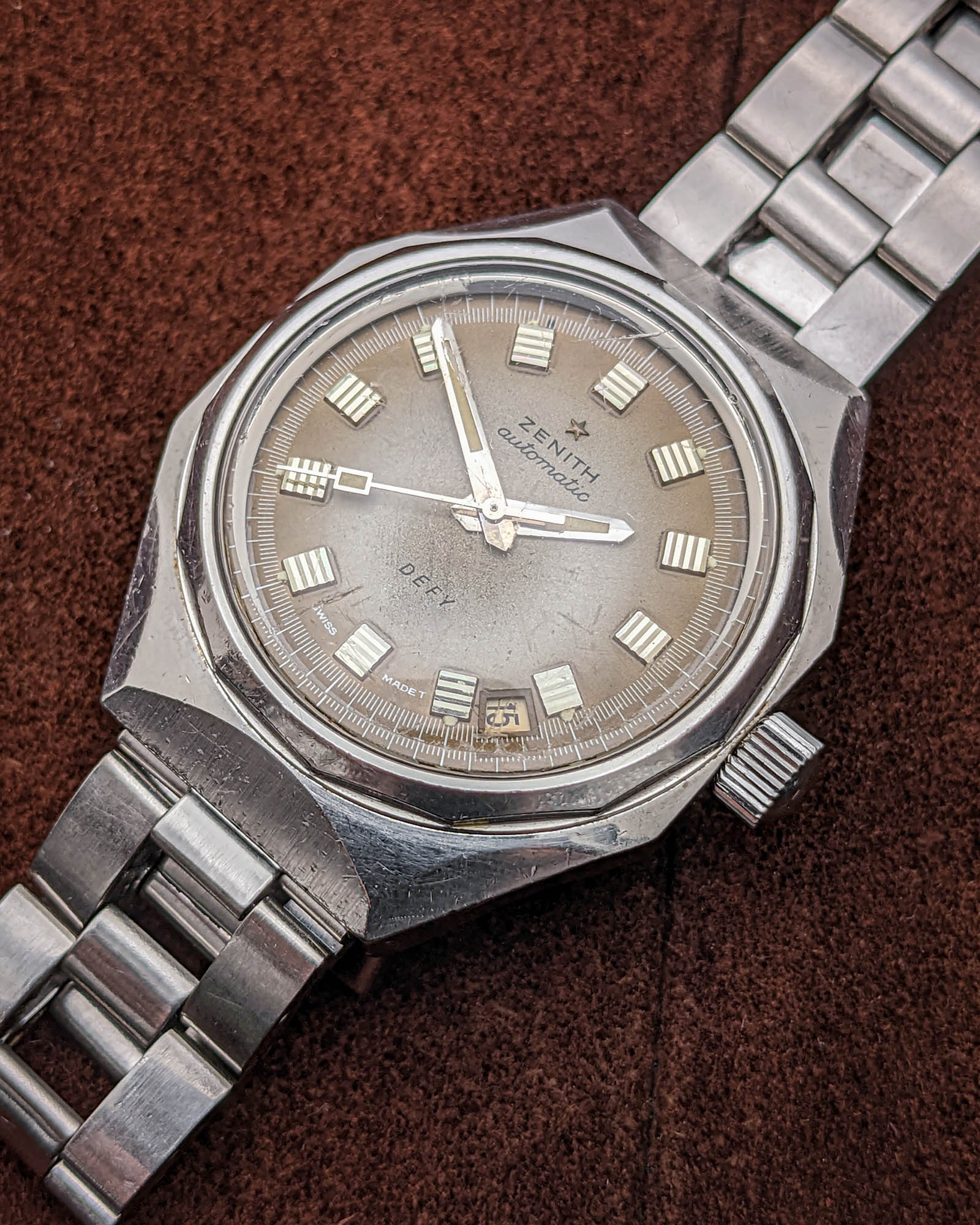 Although it was released before the first true integrated bracelet watch model, the Zenith Defy A3642 was an important stepping stone towards the creation of the genre and stands as a bold, desirable, and stylish reference on its own. Both the enthusiast community and Zenith itself are slowly beginning to acknowledge the influence of this model, as vintage examples are climbing dramatically in price and the brand has released a near-identical reissue of the original model. As a representative of a revolutionary moment in watchmaking history, this is a timepiece that deserves attention from collectors, and it may well be one that encourages us to explore deeper into the roots of design trends in the industry.