Boy, was I excited when I saw this folder inside one of the literally hundreds of pre-Watches & Wonders online filesharing systems. It was titled DEFY EXTREME, in all caps. Although the Zenith Defy watch has its roots in the 1960s, the Defy Extreme in my mind recalls the super outlandish creations from Zenith’s infamous Nataf-era. Well, the Zenith Defy Extreme Watch Collection is back for 2021 not quite with a vengeance, but as an “all-terrain” 1/100th of a second chronograph. 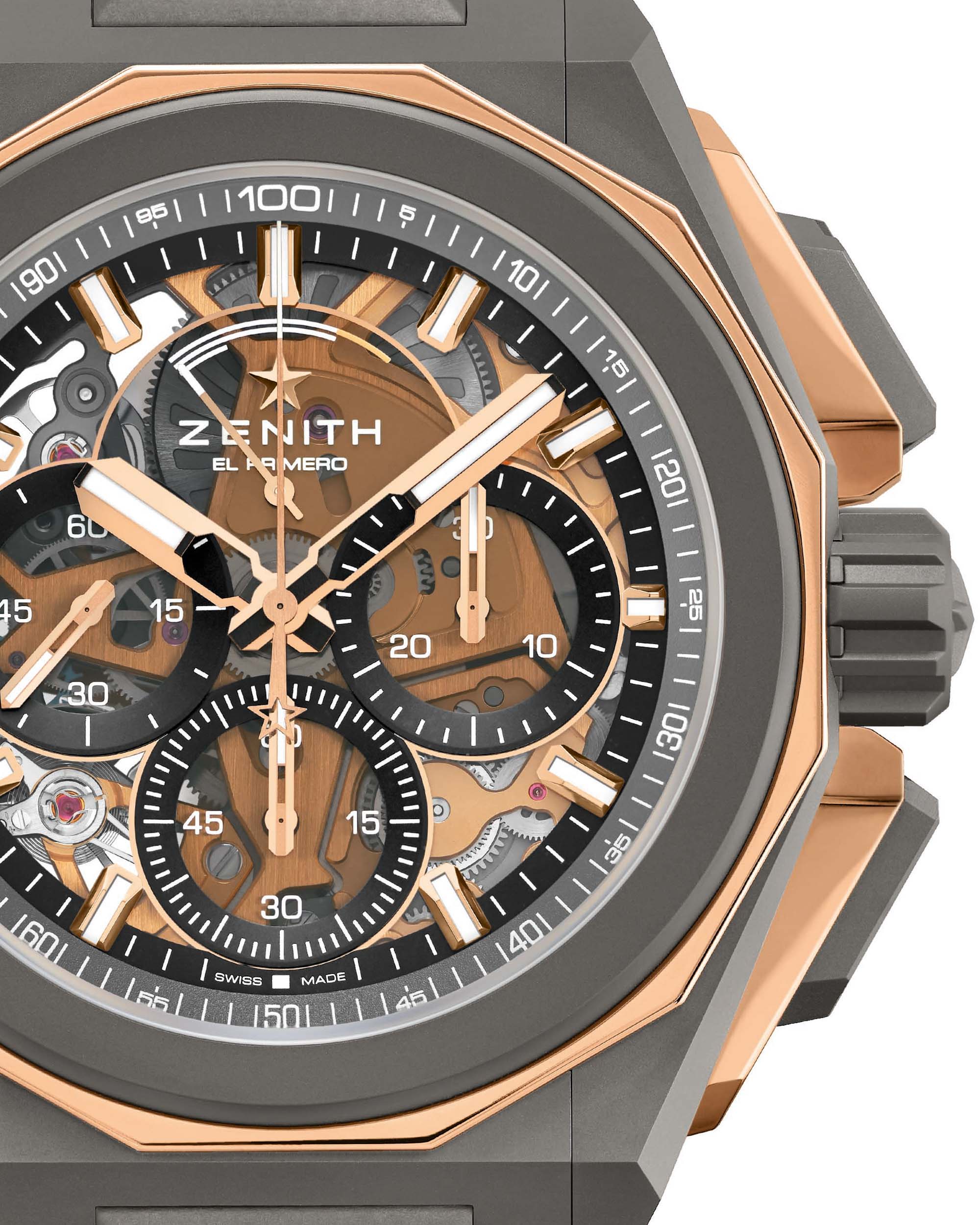 It was just a few months ago in my review of the quite stellar Type 20 Blueprint that I wrote: “During Thierry Nataf’s time, Zenith produced ho-hum »classic« watches and absolutely unhinged monstrosities (that unhinged idiots like myself seem to have developed a strange affection for).” Well, the Defy Extreme is back as what looks more like a full-frontal attack on the Audemars Piguet Royal Oak Offshore Chronograph and less a weird exercise in cramming record amounts of entirely superfluous design elements into the same one watch. 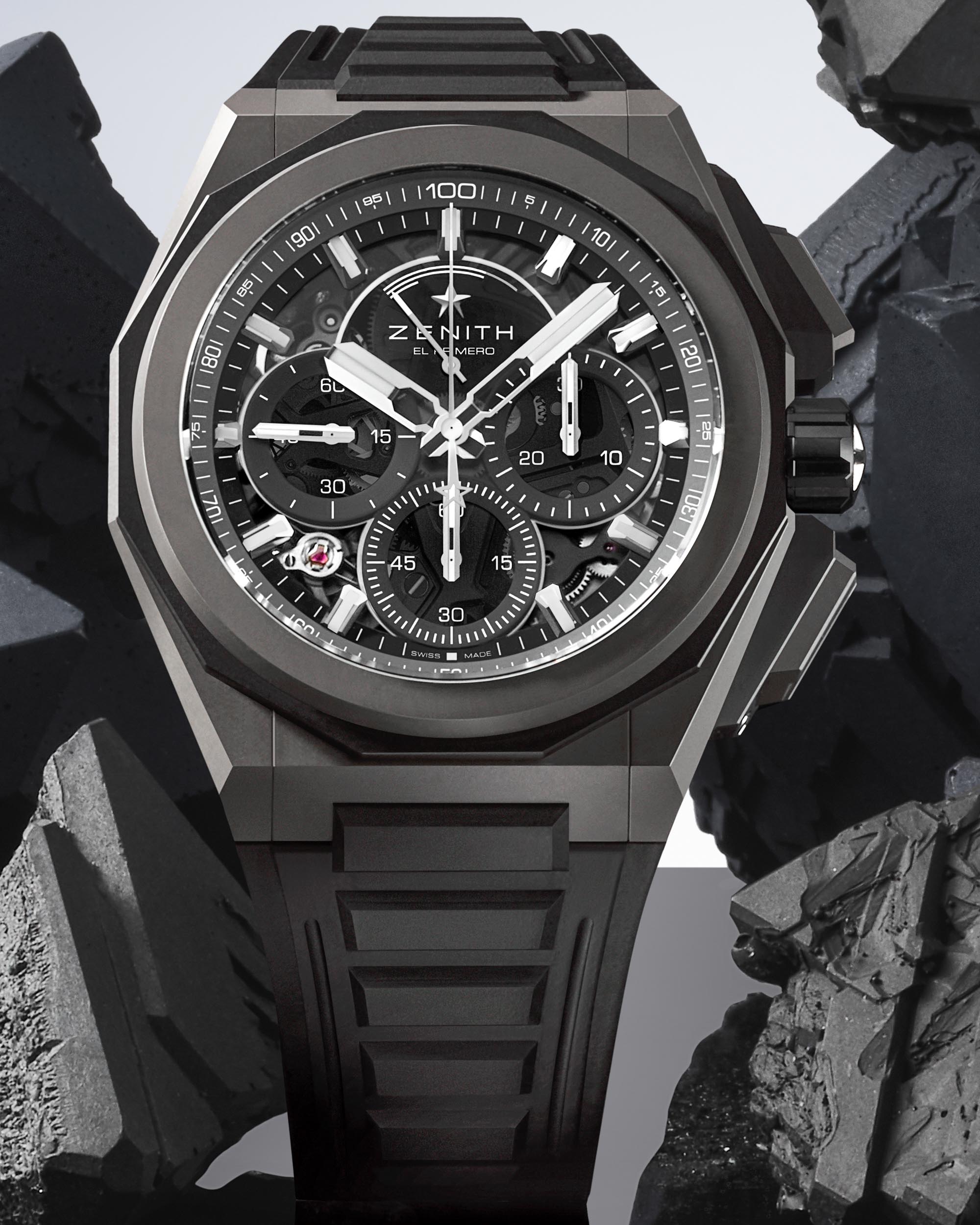 Zenith calls the new Defy Extreme an “all-terrain” chronograph – perhaps a subconscious stab at AP’s Offshore that is relegated to, well, the offshores. With a water resistance of 20 bars (200-meter equivalent), these highly sophisticated mechanical chronographs aren’t meant to be safe queens. For a moment, I was strangely worried about these being called an “all-terrain” watch and then coming with a measly 50 meters of WR, or worse – which, in my mind, is unacceptable from any watch that’s priced into four figures, let alone five. But a 200-meter rating suggests a proper case and gaskets. Most current offshore chronographs come with 100 meters of water resistance. 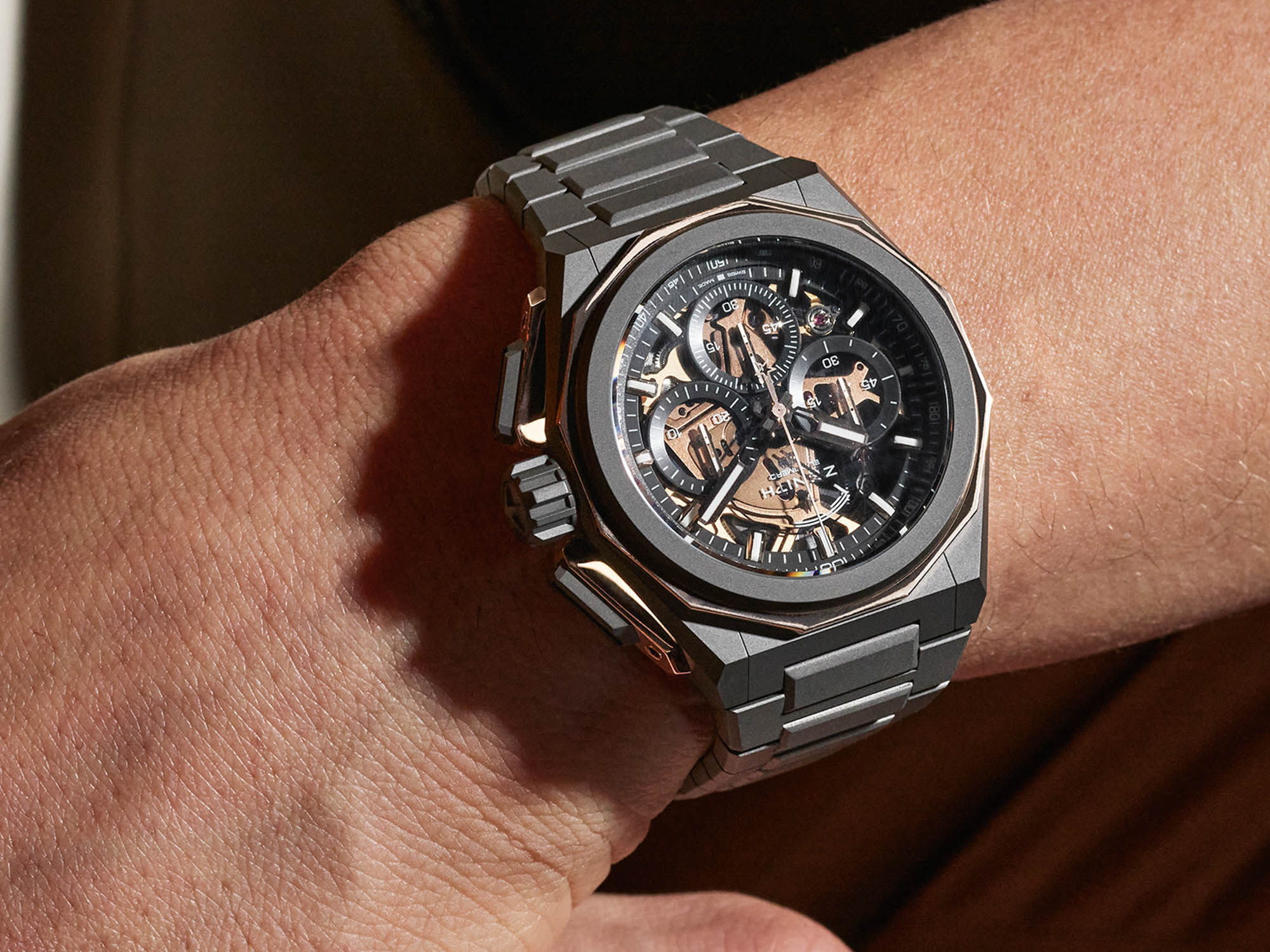 The 45mm wide and 15.40mm-thick case on every new Zenith Defy Extreme watch is crafted from titanium that is available in a more traditional brushed and polished look, and a more futuristic micro-blasted design. One of the models, reference 87.9100.9004, adds 18kt polished rose gold to the bezel ring and pusher surrounds – the latter being arguably the closest in their appearance to the ROO. Judging from images only, it’s these chronograph pusher surrounds that I wish were a bit more of their own thing, somehow. Still, looking forward to checking these out in the metal before passing too final a judgment. 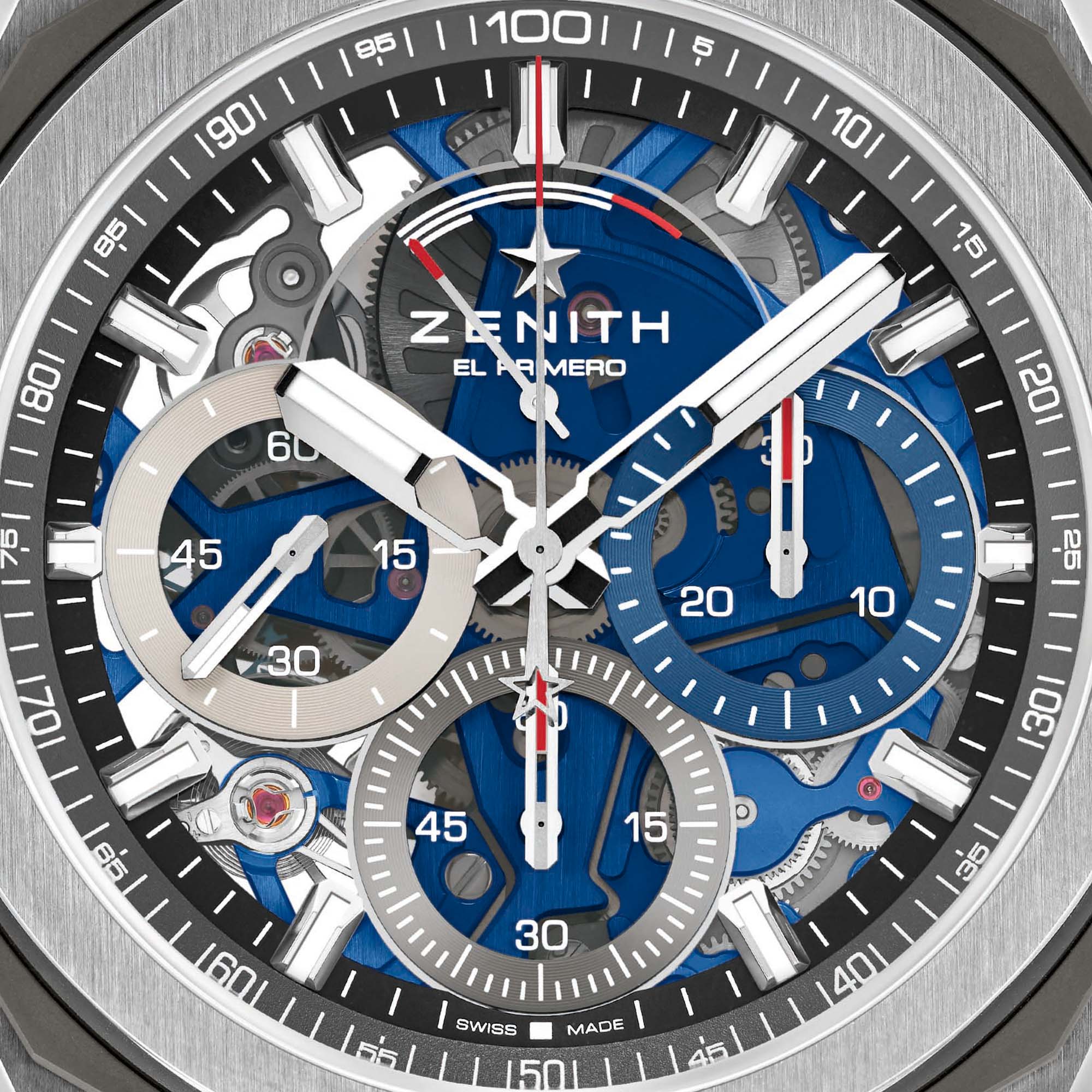 The transparent dial of the new-for-2021 Zenith Defy Extreme 1/100th Chronograph follows the existing trends that dictate the Defy aesthetics (and also a lot of the designs of other LVMH brands, but that’s for another discussion). Still, it is a good match for the Defy Extreme, and that’s especially true when taking those massive hour and minute hands into account. Their filigree center followed by a wide solid area makes these a spectacular hand-design, even if the eye is at first overwhelmed by all the rest that is going on. The applied hour markers and the unmolested minute track and 100-ring around the periphery allow for accurate reading of the time – a “feature” that still remains overlooked or sacrificed on far too many luxury watches. 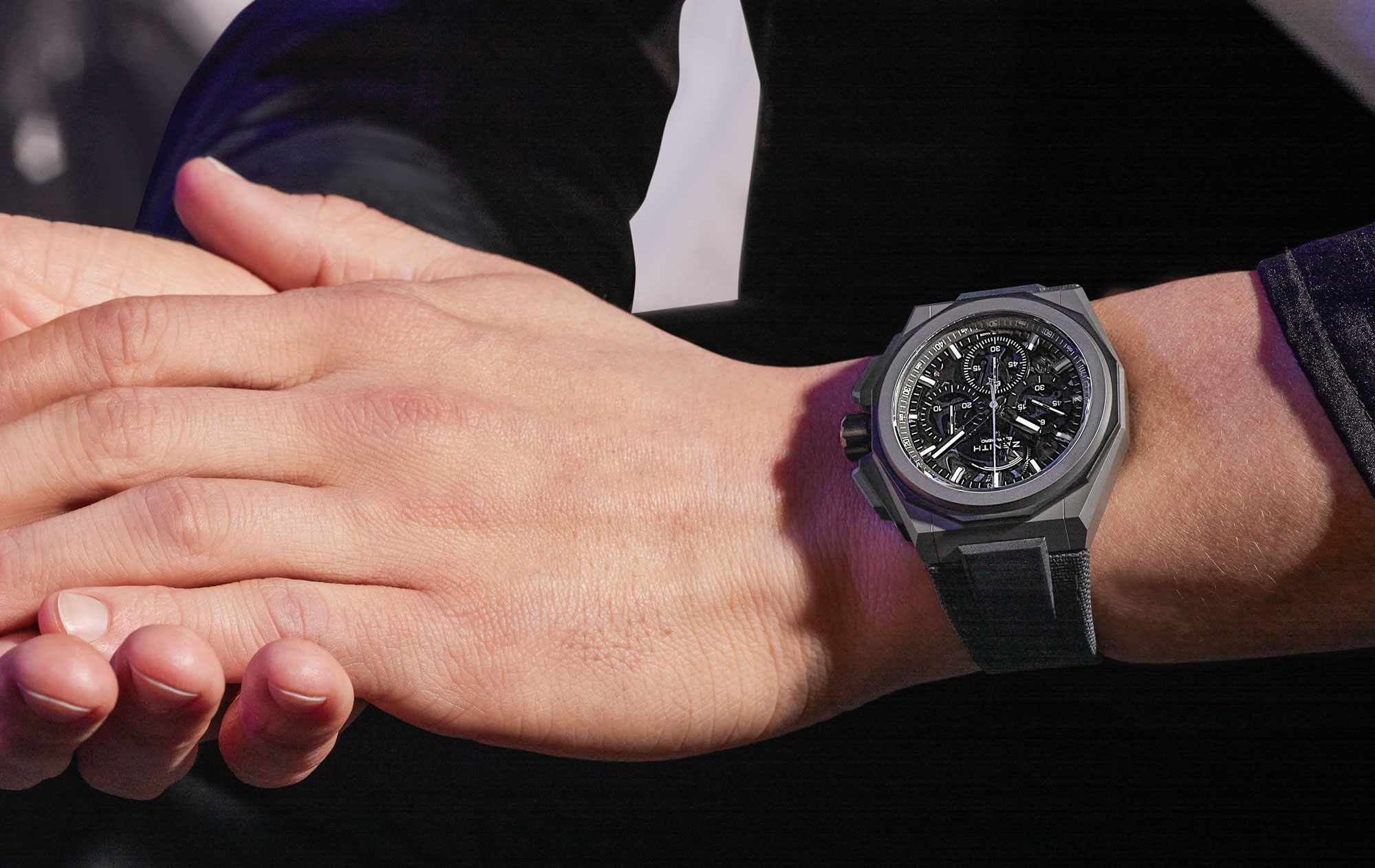 Revealed by the dial is the epic Zenith El Primero 9004 movement that comprises one super fast balance wheel beating away at 5 Hertz (36,000 vph) and one ultra-flippin’-fast balance wheel that operates at 50 Hertz (360,000 vph). The latter is responsible for the 1/100th of a second chronograph and its lightning-fast chronograph seconds hand that sweeps across the entire dial not in one minute like on regular chronographs but in one second. Many choose chronographs for their added visual interest and fascinating operation – well, a center-mounted seconds hand that revolves 60 times faster than others is right up there with the most spectacular mechanical chronograph wristwatches ever made. Chances are this feat was made possible by at least some know-how coming from LVMH sister brand TAG Heuer – but if that’s true, two major chronograph makers working together I reckon is something worth celebrating, as opposed to sniffing at. 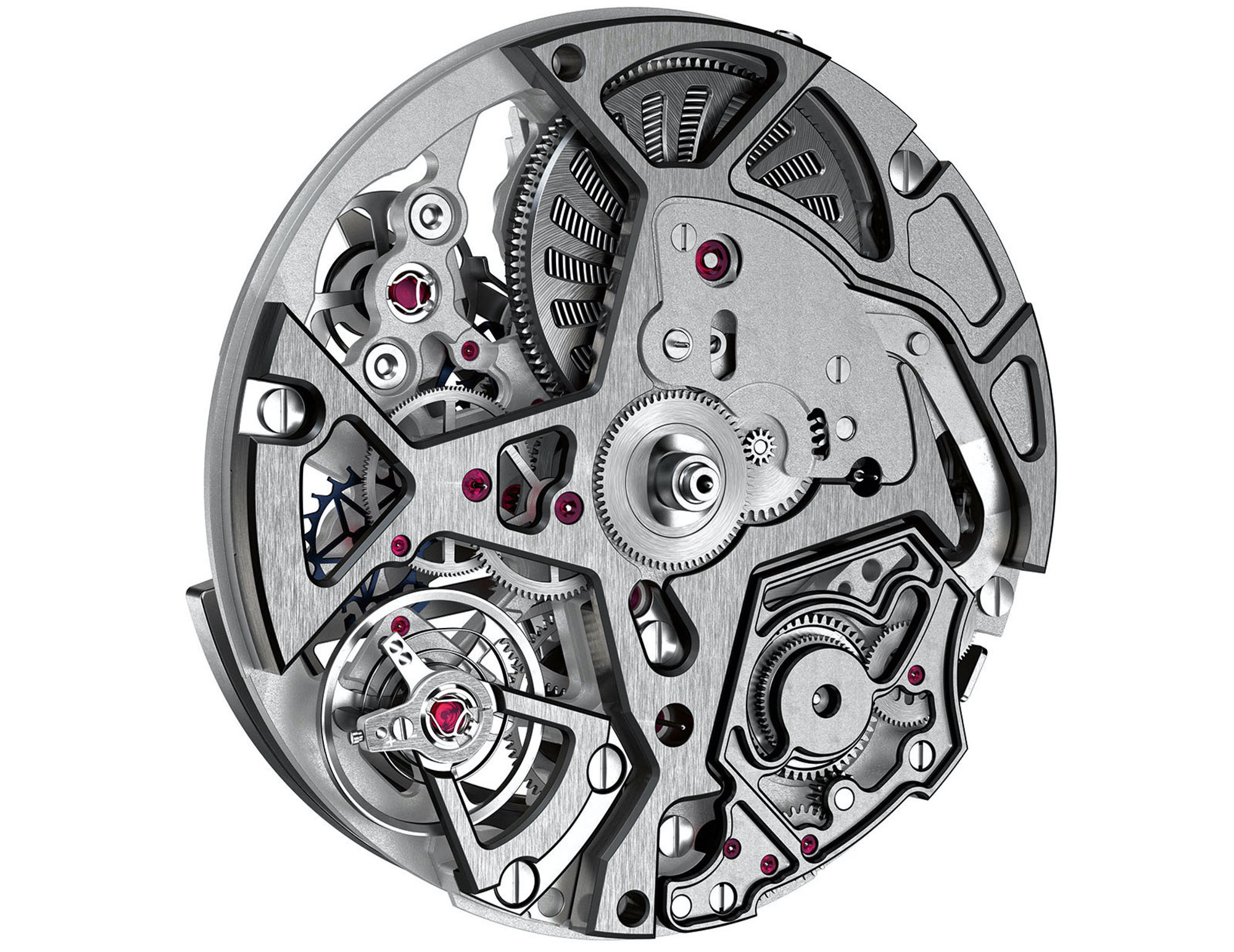 Power reserve is quoted at “minimum 50 hours,” and, as it damn well should be on an El Primero, it’s replenished by a self-winding system. There is a power-reserve indicator up at the 12 o’clock position, which is another rarified but genuinely useful feature on modern mechanical movements. The main plates are also unique in that they are colored to match the palette of the watch: The movements are colored black, blue, or gold, which looks so naturally right with the case components that one might just take this exceedingly rare movement finish for granted. If anything, it shows that Zenith was not slapping these watches together but designed them as an entire package – from case and bezel through hands to movements. That effort deserves to be highlighted, even if it is reflected in the price. 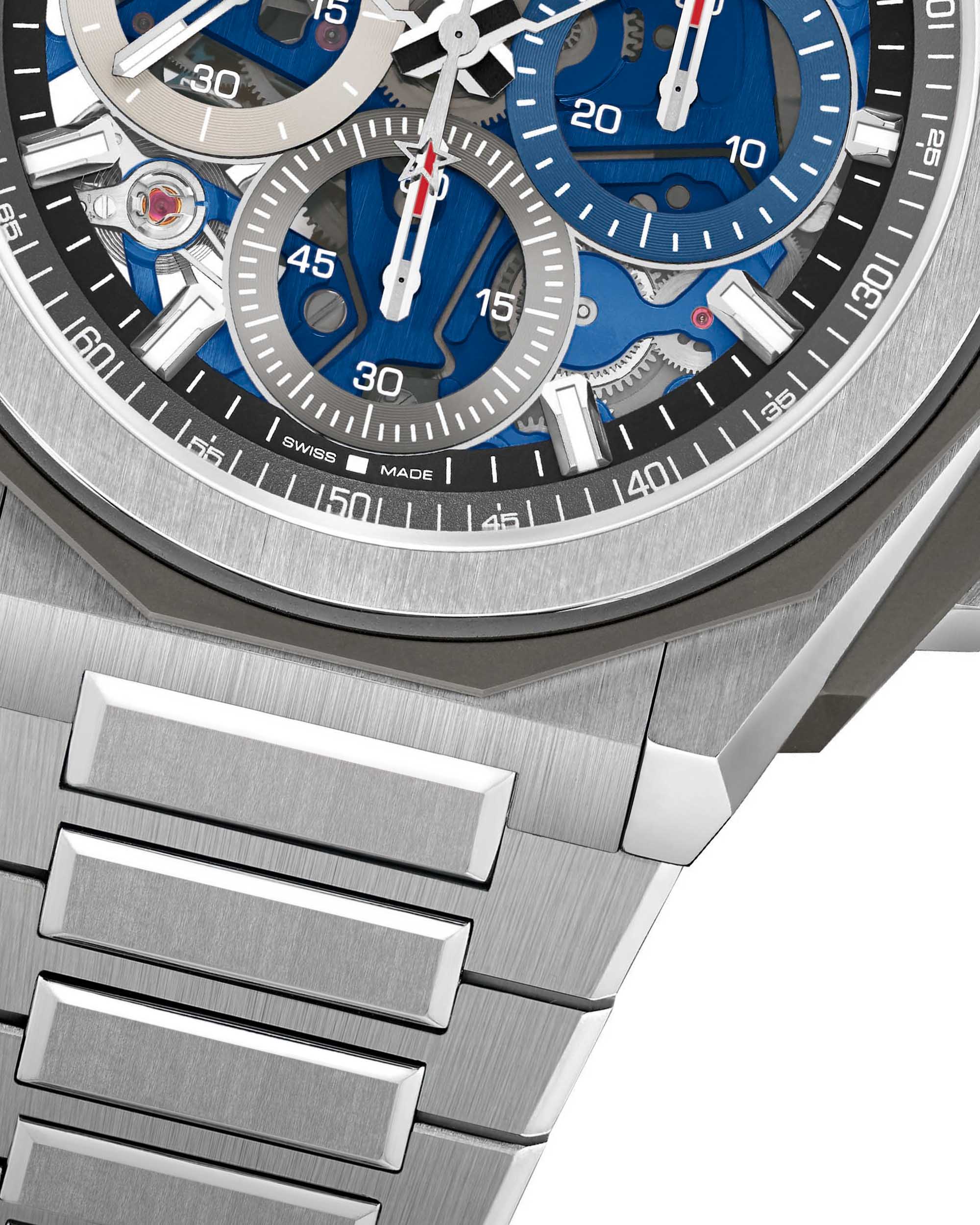 The new Zenith Defy Extreme is available in three main variations, each on a micro-blasted titanium bracelet with a rubber strap and a Velcro® strap also coming in the box to fresh up the look. It must be said that these monolithic case designs aren’t always the comfiest, but the entire case and bracelet is made from lightweight titanium, and that might just make these rather beastly watches fun and comfortable to wear. That recipe has sure worked with the Breitling B55 Exospace. 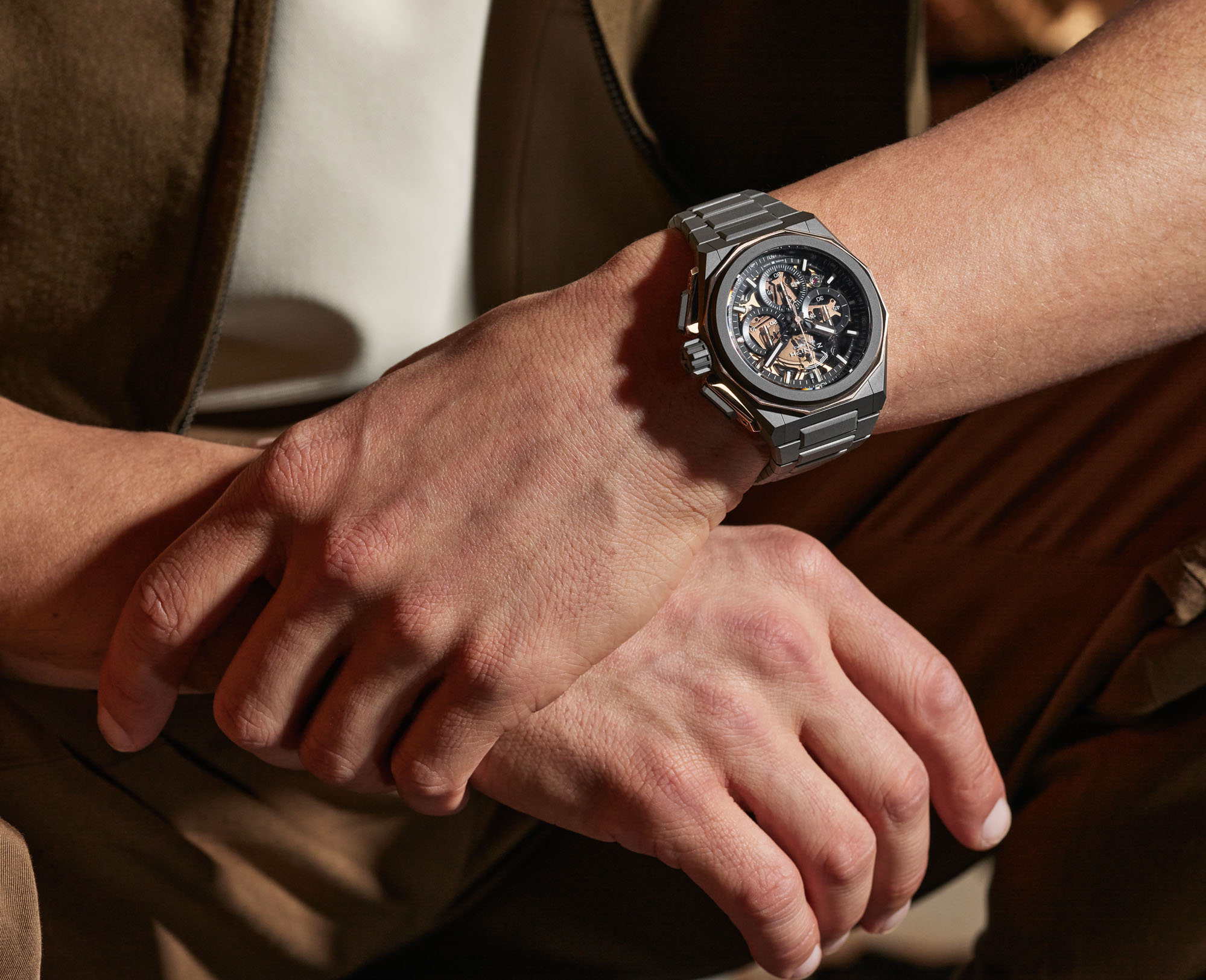 The Defy Xtreme, as it was spelled in the naughties, was never meant to be a universal-appeal watch, and that’s certainly true for the 2021 Zenith Defy Extreme. These are big and brash, which is a developed taste for some (and simply unwearable for others), but the technical prowess reflected in these double-escapement movements and the overall attention to detail simply cannot be overlooked. 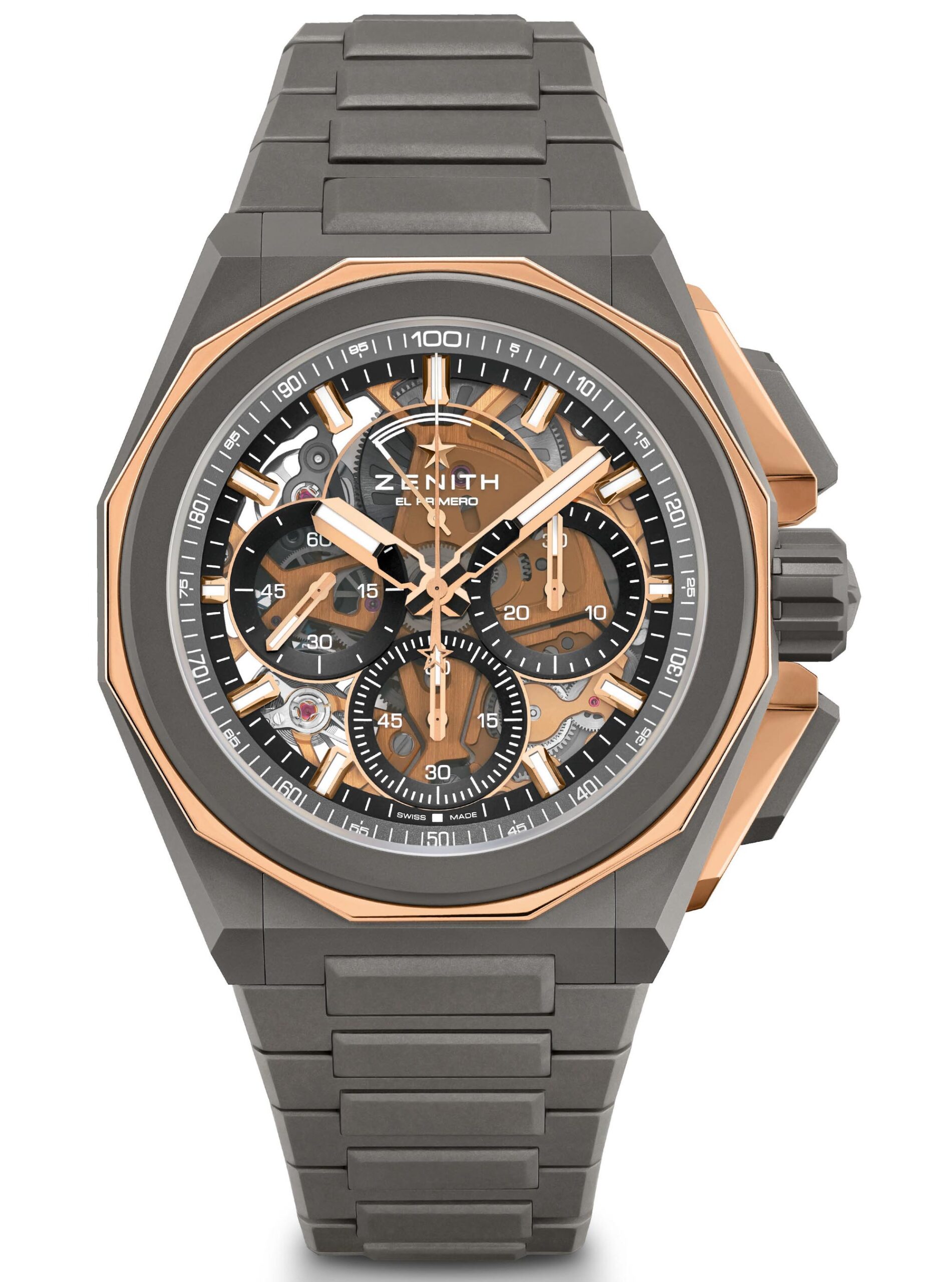 I can’t help but think that a decade or so ago a watch with these technical specifications and bold looks would have retailed near twice what they do now. This is to say that it is now that they can really function as a competitively priced, albeit no doubt expensive, alternative. While these are full-on luxury watches, with 2021 Zenith Defy Extreme prices starting from $18,000 for the black and blue versions and topping out at $22,000 for the Zenith Defy Extreme reference 87.9100.9004 with the 18kt rose gold components, these mighty impressive chronographs are actually pretty strong value. Anyhow, we’ll hold back on final judgment until seeing the quality of the case, bracelet, and wearing comfort in the metal, when we get these in for a full review. You can learn more at the brand’s website.