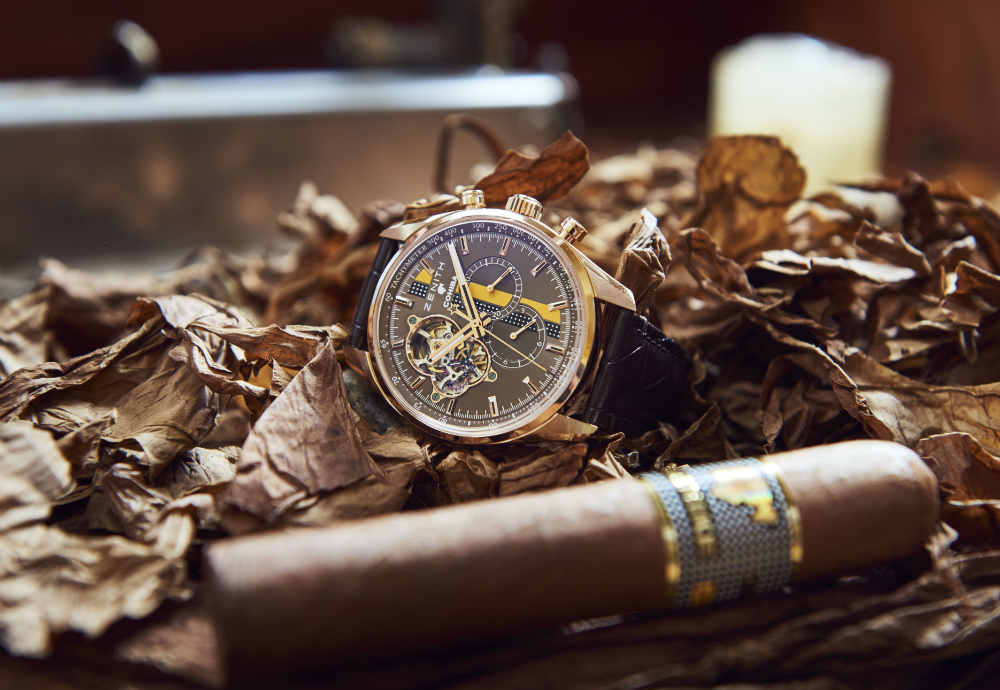 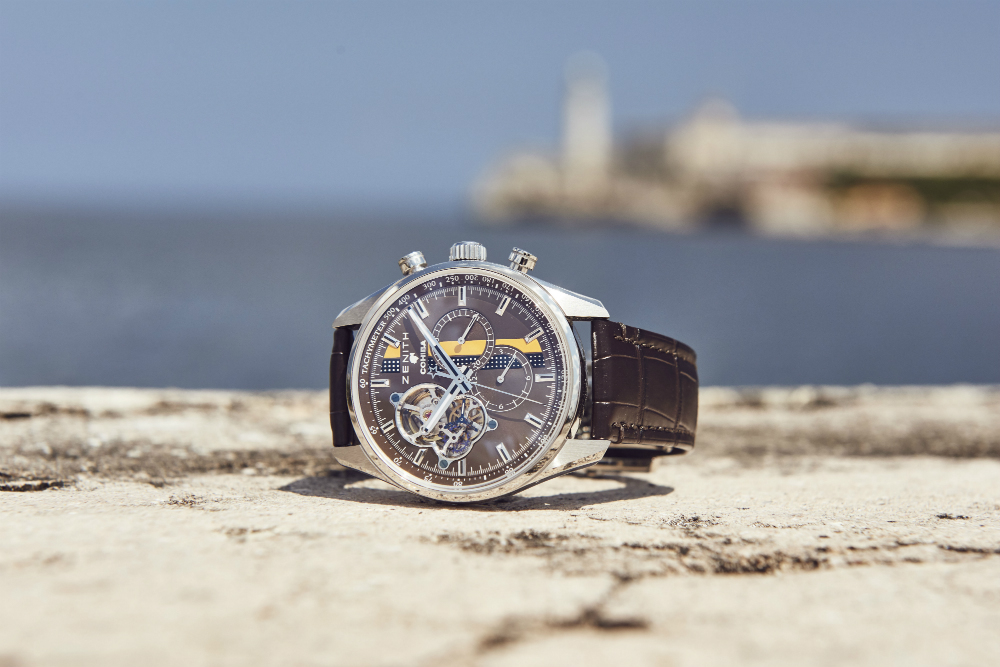 One, the most famous post-revolution Cuban cigar, debuted in 1966; the other, one of the most distinguished Swiss chronograph calibers, originally introduced in 1969. Now, in 2016, they come together as the limited Zenith El Primero Chronomaster 1969 Cohiba Edition. 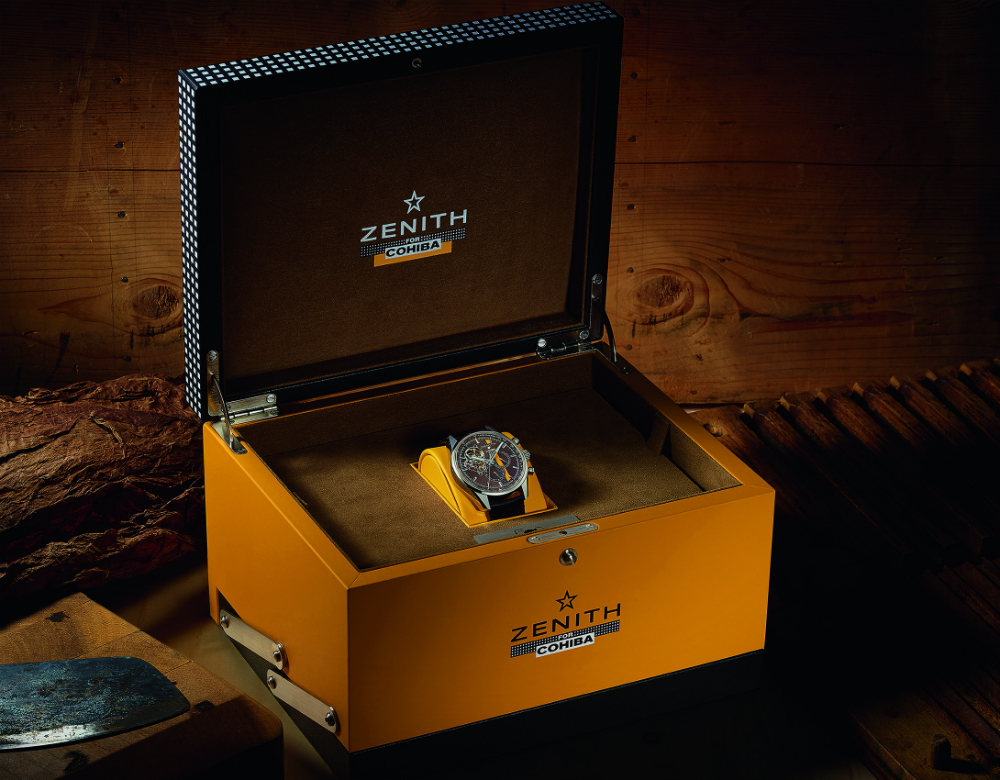 First things first, though: Fine hand-rolled cigars paired with fine watches are, of course, nothing new. In The Cigar Report, a quarterly periodical I once edited, I wrote a series of pieces entitled “Watch in a Box,” the box in question being a cigar box or humidor. The magazine itself was murdered by the 2008 financial crisis, but “Watch in a Box” could have lived, theoretically, pretty much forever. 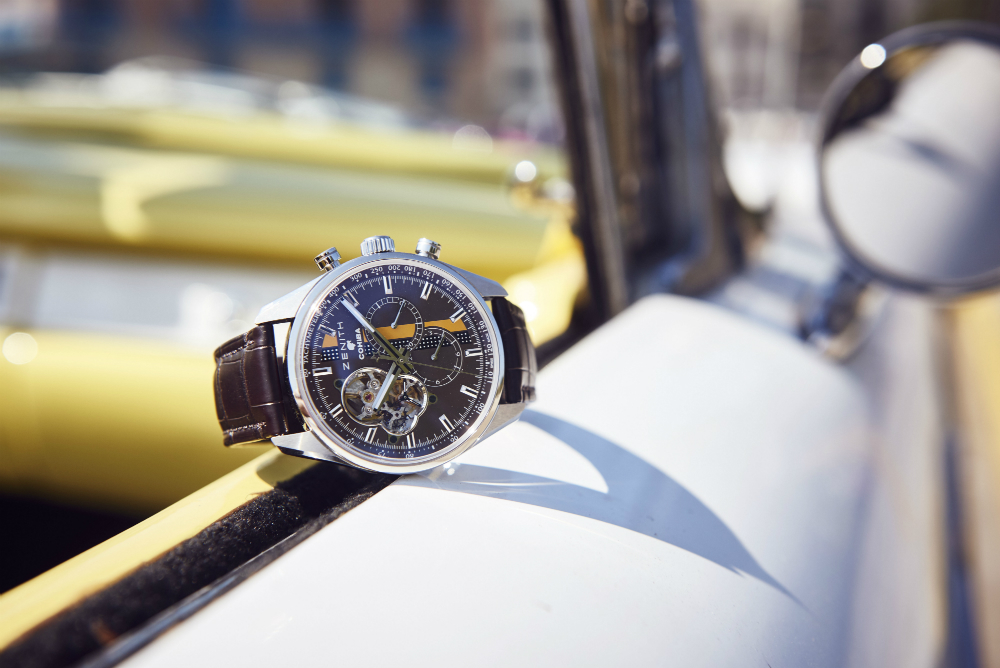 Second, this isn’t even the first Cohiba cigar watch — about which, more in a moment. But with the fiftieth anniversary of the most iconic post-revolution Cuban cigar brand at hand, Zenith (which has been busy in the vintage motorsports world of late) has very much made the right move here. 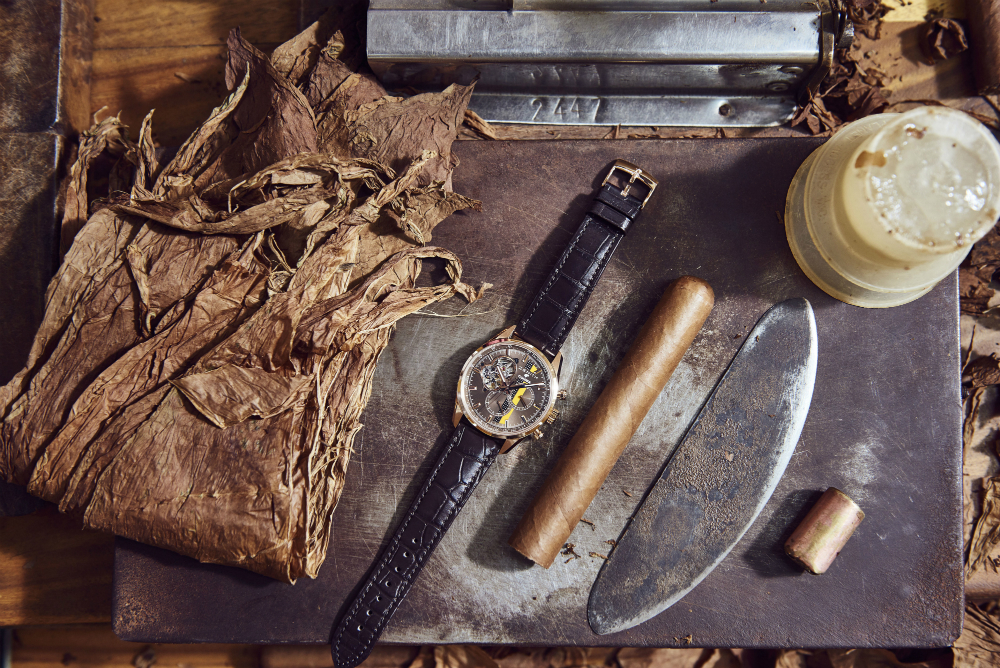 A little history: Cigars and wristwatches have been sold side by side since 1932. That was the year Alfred Dunhill Ltd. patented its first wristwatch (Dunhill pocket watches debuted in 1903; watches and clocks set into cigar and pipe lighters came right after). Dunhill, now a Richemont company, was far more a gentleman’s tobacconist up through the 2000s than the modern English men’s fashion house it has become over the last handful of years. 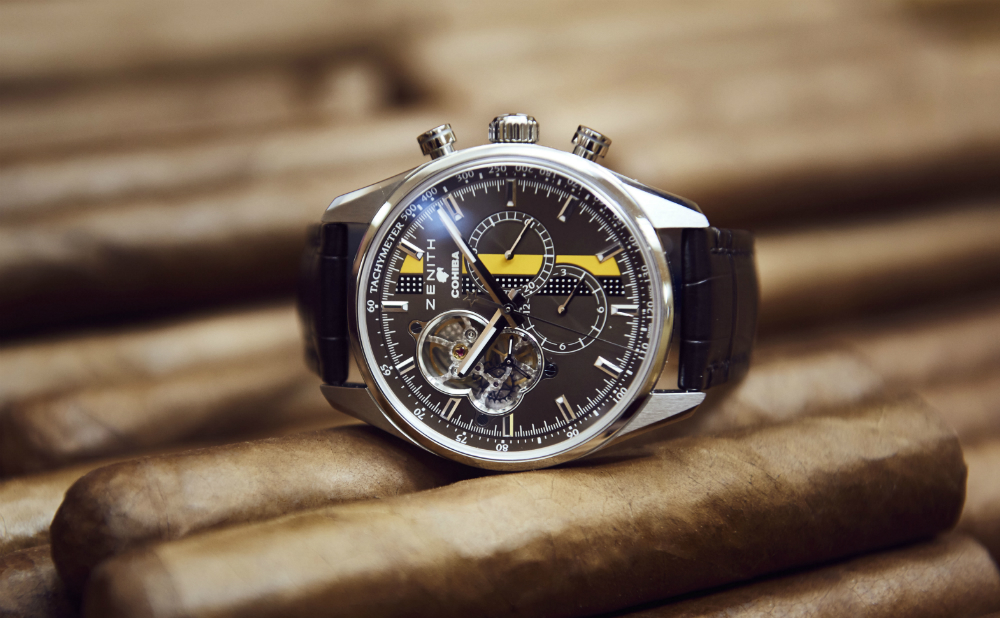 Then, there was Cuervo y Sobrinos. What Cartier was to Paris, Bulgari to Rome, and Tiffany & Co. to New York, Cuervo y Sobrinos was to (pre-Castro) Havana. As the city’s top purveyor of jewelry and timepieces — Churchill, Hemingway, and Clark Gable were clients — CyS worked with a number of Swiss watchmakers (Rolex, Patek Philippe, and Universal Genève among them) that produced both double-signature and private-label timepieces. It was located in Havana’s Old Town, and as such, corporate real fábrica de tabacos clients commissioned countless custom-dial watches with logos such as the classic Partagas script to be given as executive and retirement gifts. Vintage Cuervo y Sobrinos, mostly from the 1950s, pop up often on auction sites. Today, the modern incarnation of CyS names its models after cigar vitolas (the unique cigar measures that combine length, girth, and shape), and most of them come in a humidor, not just any old box. 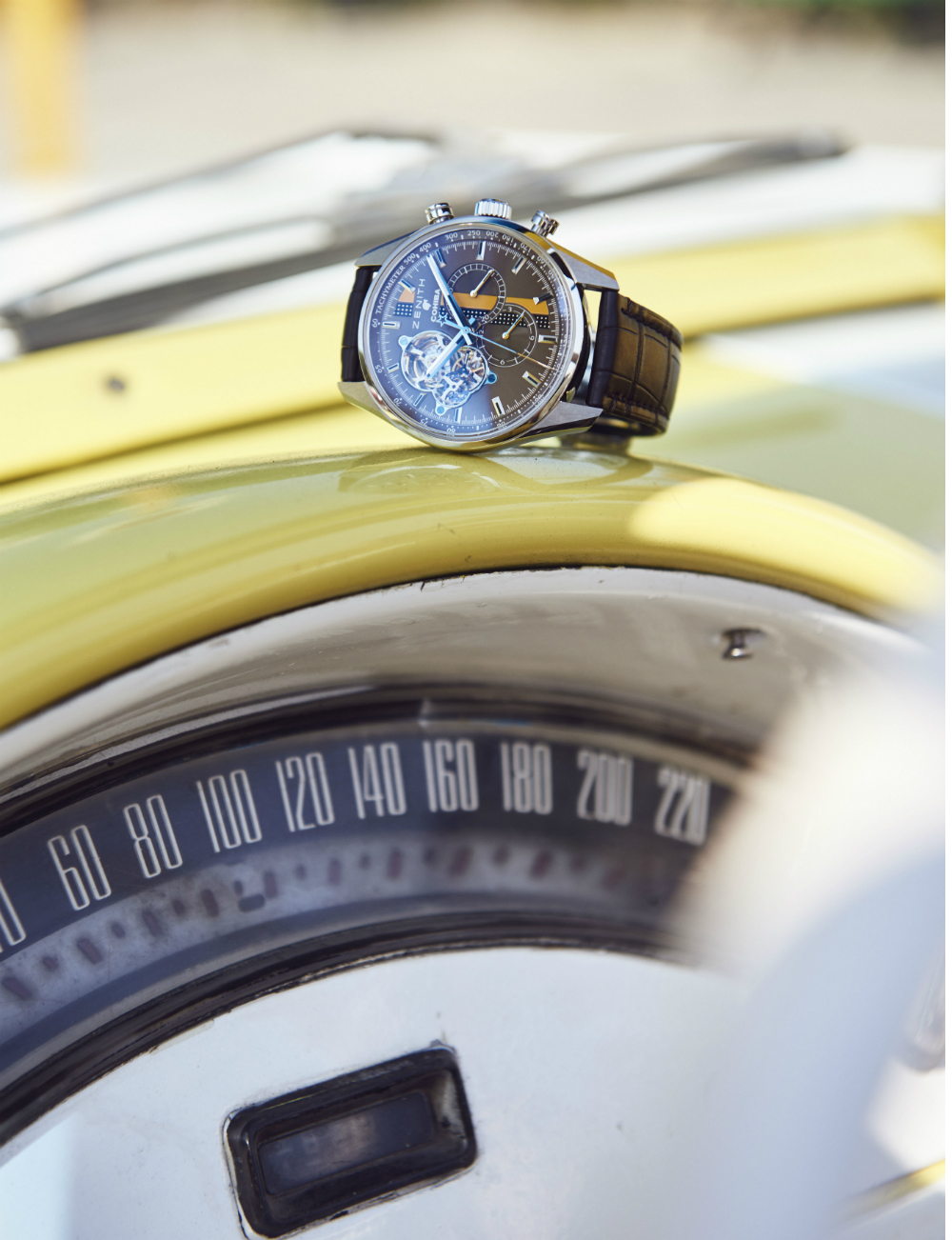 Another notable tobacconist, Davidoff of Geneva, which these days stays far closer to its roots as one of the world’s preeminent cigar makers, partnered with IWC Schaffhausen in the 1980s to produce a small capsule collection of watches evocative of very early Hublots. Edward Sahakian, owner of Davidoff London, recalls that the late Dr. Ernst Schneider, who acquired both the Davidoff of Geneva boutique and the Davidoff cigars made in Cuba from Zino Davidoff in 1970, “had one of those watches and used to wear it all the time. His was a gold watch with a black leather strap.” (It also came in two-tone and solid steel.) Today, Zino Davidoff, a spinoff luxury watch-and-accessories brand created to skirt draconian European Union regulations governing tobacco promotion, carries on the tradition set forth by the Davidoff x IWC watches. 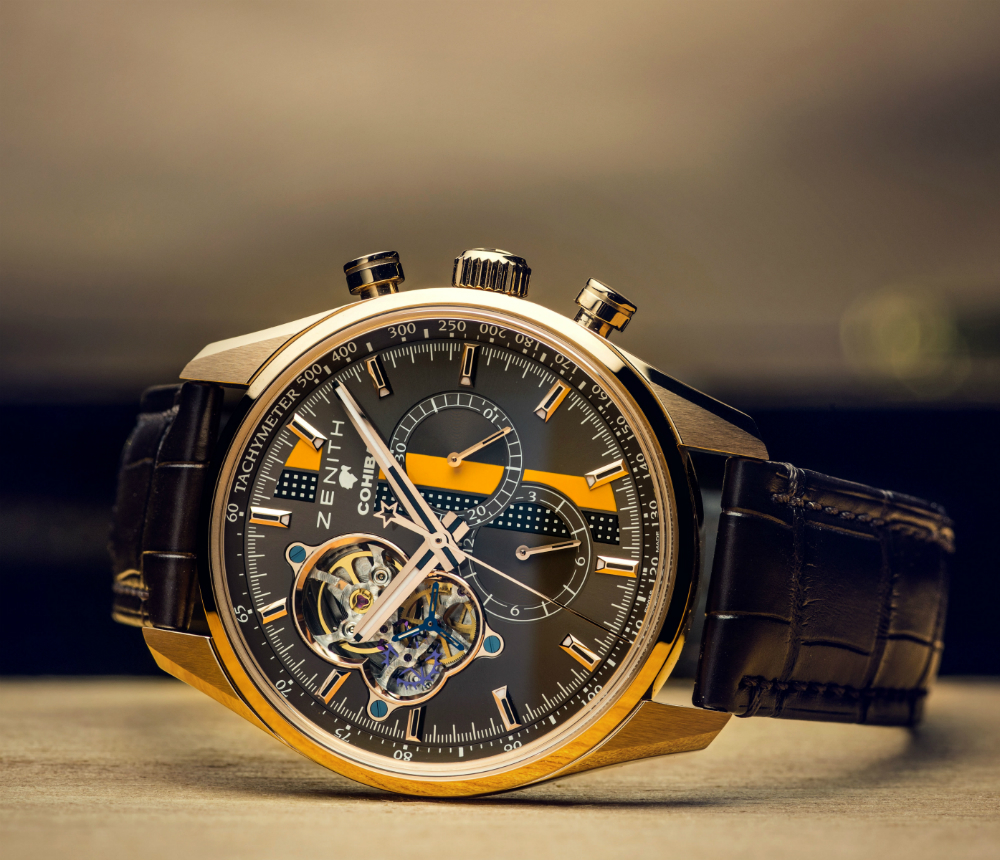 On and on it goes: A limited-edition tobacco-brown Hermès Cape Cod 1928 that came in its own humidor was created to commemorate the opening of the Hermès boutique on Wall Street (which still stands today); a Blancpain Quantième Perpétuel GMT (which had a tobacco-hued dial) and a Bell & Ross 126 XL Edición Limitada, both of which came housed in a humidor; and even Swatch made a cigar watch with the image of a full-size cigar running from one end of the strap through the dial to the other end. Meanwhile, Michel Perrenoud, a now-retired maker of watch boxes who was based in La Chaux-de-Fonds, Switzerland, went on to become a preeminent humidor manufacturer, famous for his pyramid-shaped caves à cigares. More recently, the intertwined strands of watchmaking and cigar rolling have been knitted together via the ongoing collaboration between Hublot and Arturo Fuente, the premium cigar maker from the Dominican Republic, which produces the highly coveted limited-production Fuente Fuente Opus X cigars. That partnership has yielded two limited-edition timepieces thus far: the King Power Arturo Fuente and the Classic Fusion Arturo Fuente ForbiddenX. The latter features actual tobacco leaves in the dial and was even offered as a tourbillon. 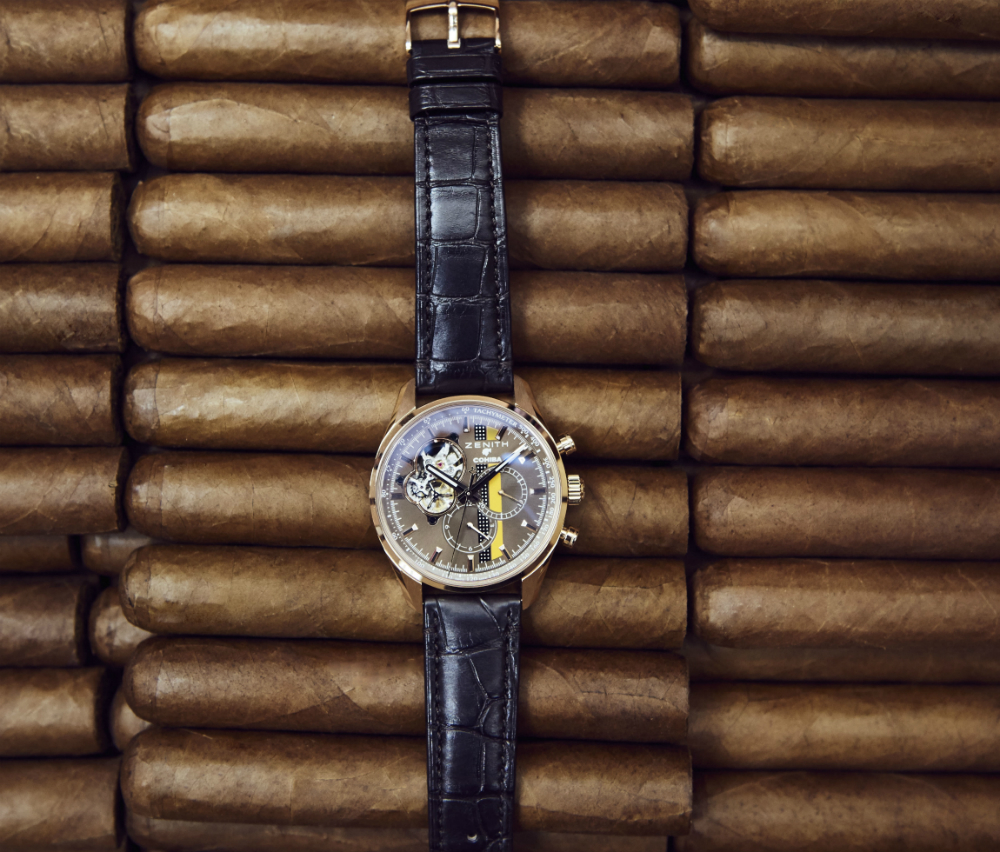 Then there was the first “Cohiba” watch made by Frédérique Constant — a project with which I’m familiar, given that I initiated the partnership when I was creative director of General Cigar Co., maker of Macanudo and the U.S. versions of Partagas, La Gloria Cubana, and of course, Cohiba. (Well, the Dominican version, anyway, known in cigar circles as “Cohiba Red Dot” to distinguish it from its Cuban counterpart.) This limited-edition Cuban watch came in a glass-lidded humidor, but unlike most others, this particular humidor-cum–watch box came fully stocked with cigars. 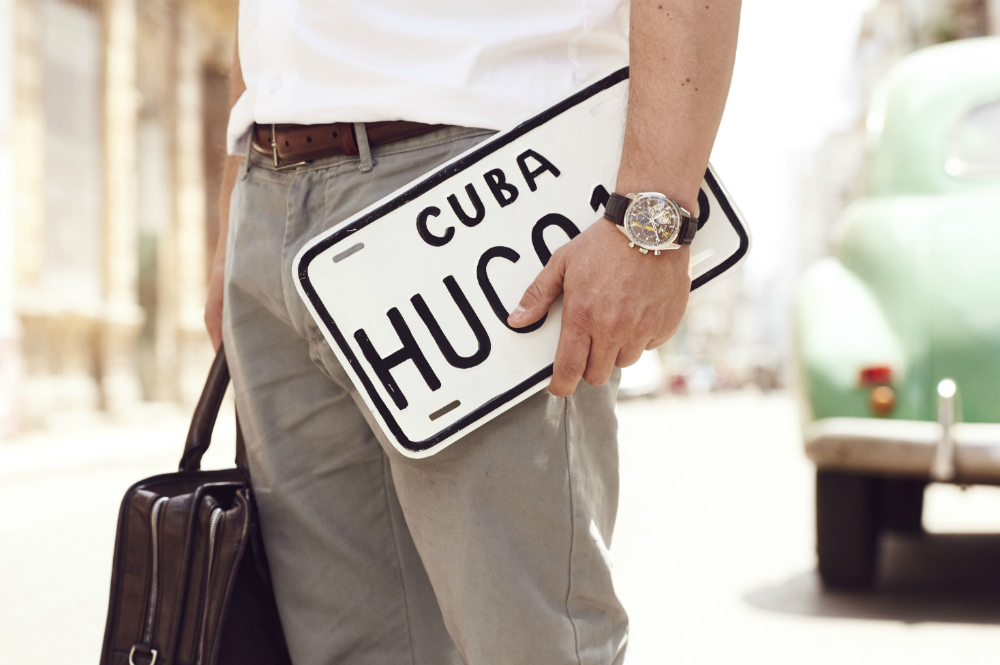 All of which brings us to the all-new limited-edition Zenith El Primero Chronomaster 1969 Cohiba Edition, with 50 examples in 18-karat rose gold and 500 in stainless steel. The partnership could be a veritable (rose) gold mine for Zenith: Never has Habanos S.A. — the export and global-marketing arm of Cubatabaco, Cuba’s state tobacco company, with more than 20 pre-revolution cigar brands and 10 post-revolution — entered this kind of agreement. Given the voracious, moneyed Havana-cigar set, many of whom flock to the annual Habanos Festival, this could yield big dividends for Zenith and LVMH Moët Hennessy Louis Vuitton watches for years to come. (The 2016 Habanos Festival, the eighteenth of its kind, attracted 2,000 attendees from 60 countries, and the recent loosening of restrictions on Americans’ ability to travel to Cuba and buy cigars there certainly won’t hurt.)