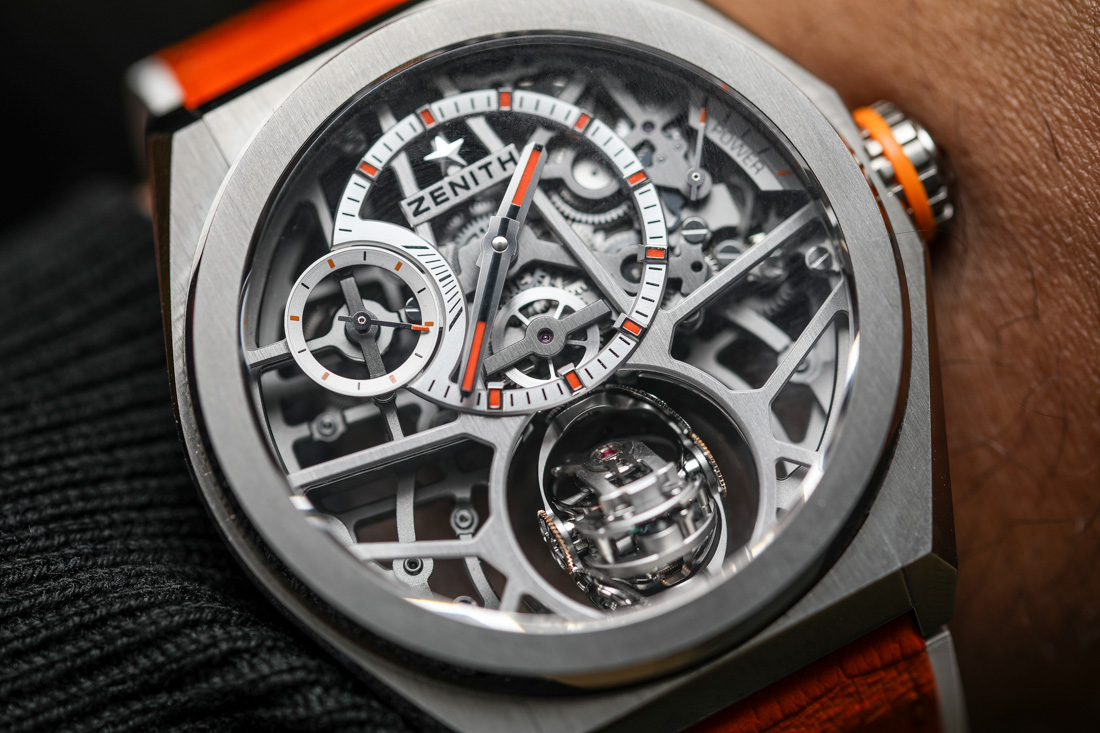 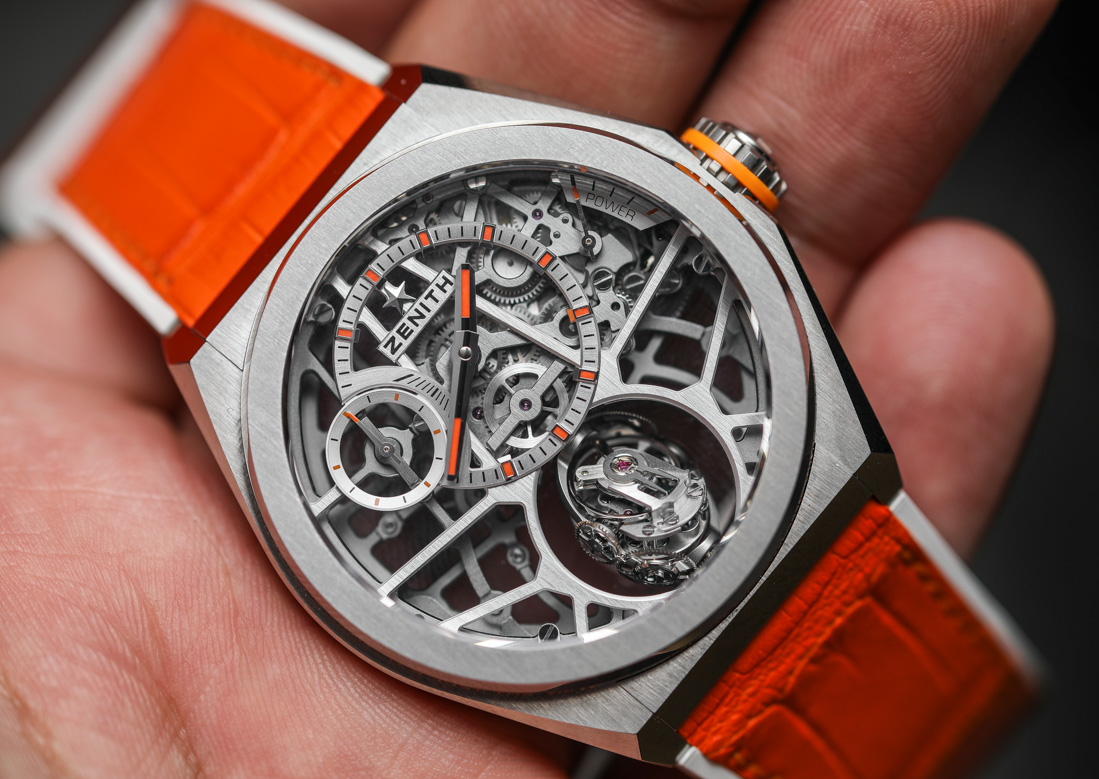 For 2018 Swiss Zenith continues their relationship with music personality and producer Swizz Beatz (aBlogtoWatch interview here), and today we check out the Zenith Swizz Beatz Defy Zero G watch that bears the distinctive bright orange and white metal tones of the collaboration models. The focus here is both on the unorthodox color palette used on a high-end watch of this type, as well as the technical interest we continue to find in the Zero G regulation system, which is part of the in-house made mechanical movement. 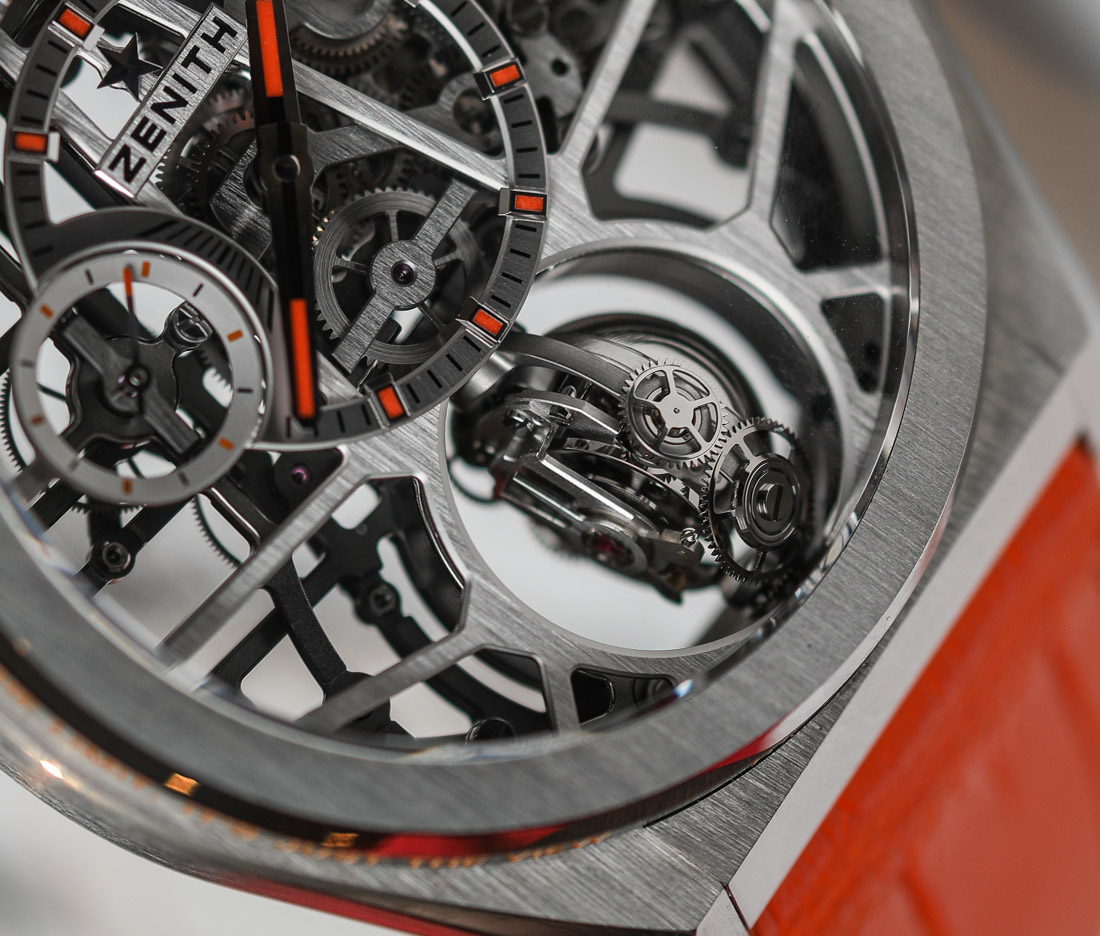 The “Zero G” system (that was once called a “Zero G Tourbillon” even though it isn’t really tourbillon at all) is a fascinating concept and has been used by Zenith in one form or another for close to a decade now (see my hands-on look at the Zenith Christophe Colomb watch from about seven years ago here as an example). What is important to note here is that for 2018 Zenith has been able to “engineer out” the significant case bubble that was previously required to make space for this sphere in the movement. This is arguably a big deal for the collection.

In addition to this limited edition Swizz Beatz Defy Zero G watch, for 2018 Zenith is also releasing a few other versions of the Defy Zero G watch (seen here). Zenith has gone back and forth with the Zero G system being used in a classic-looking watch or a modern looking one. The “Tourbillon Zero G” began life in a modern timepiece (but in a collection that was not always well-received for its looks), was later used in a series of classic-looking watches, and for 2018 returns as one of the movements available in the new Zenith Defy style cases. 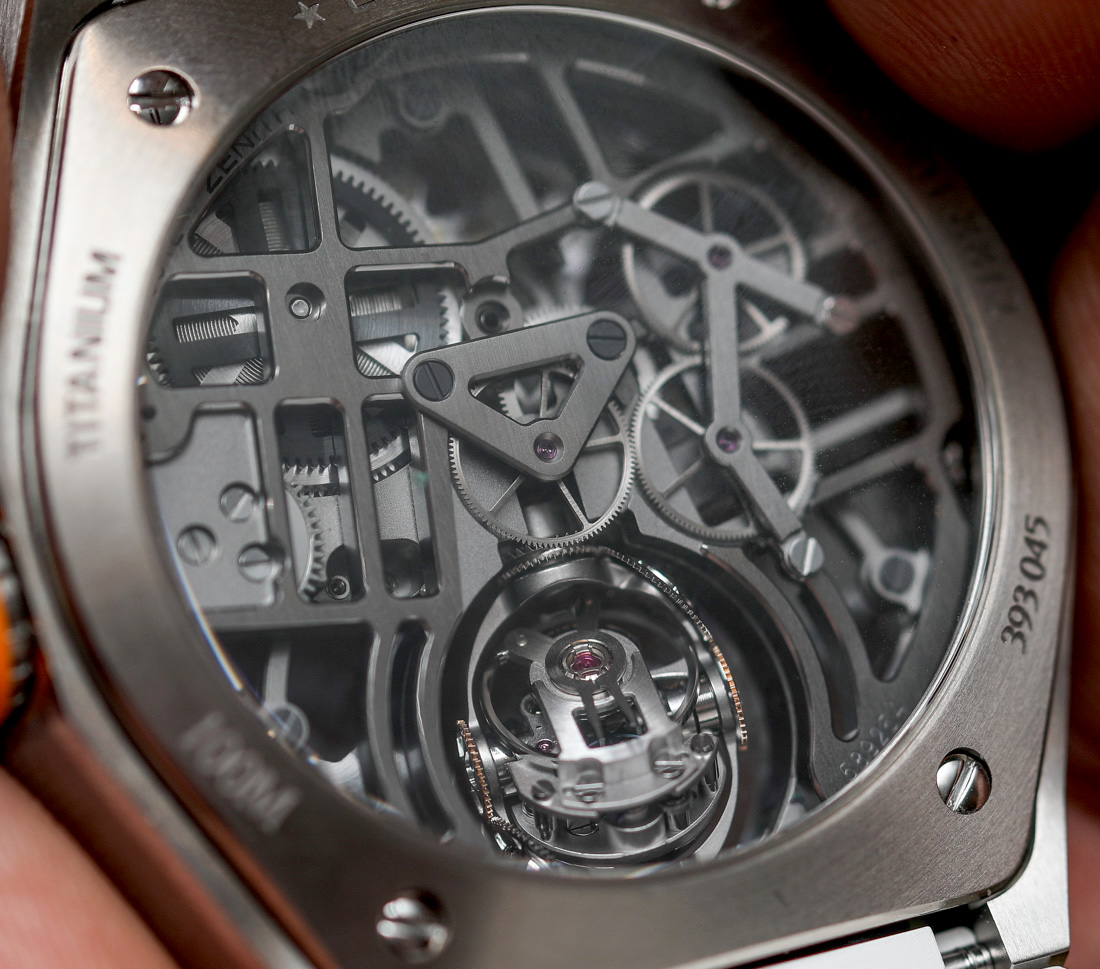 The movement is the Zenith caliber El Primero 8812 S which is visible in its fully skeletonized glory. Design inspiration is very Hublot in style, but that makes sense since Zenith is still in large part directed (although not managed) by Jean-Claude Biver. His ability to enliven luxury watch brands by making them more contemporary and “youthful” in presentation has proved to be an effective response to the complicated question of how to operate a traditional mechanical watch brand in today’s times.

The caliber 8812 S is an El Primero, which means that it has a “fast” operational frequency of 5Hz (36,000 bph). This is particularly impressive in a movement such as this where in addition to operating at a faster rate, the escapement system is included as part of a complex array of parts in the gyroscopic gimbal-style regulation system. Let me try to explain the system first before explaining how Zenith changed the “Zero G” part of the movement in these new for 2018 watches. The basic idea of the system is that despite the movement of the wearer’s wrist, the escapement system would always “point up” as the bottom of the gimbal-system is weighted. Why is it useful to have the regulation system always point up? The idea is to theoretically make the watch more accurate. 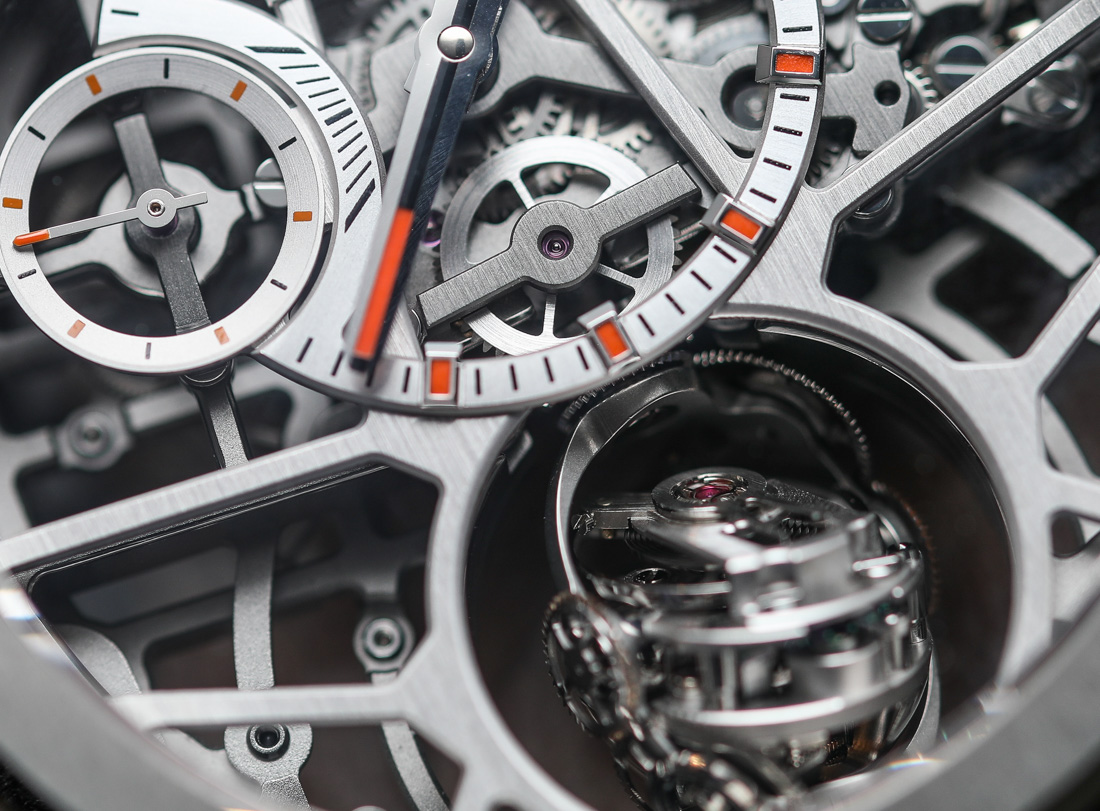 Regulation systems are affected by gravity and thus operated differently in different positions. In clocks this doesn’t matter since the device is in a stationary position all the time. In wristwatches it does matter because the orientation of the regulation system constantly moves around with the motion of your wrist. The idea of the Zero G system is to maintain a single position/orientation of the regulation system so that it can theoretically be more accurate more often. Thus, the purpose of the Zero G system is as a means of promoting accuracy in a mechanical timepiece.

Does it work? I’m not really sure. I mean the movement works and it properly tells the time, but it is hard to evaluate how much actual performance gain is achieved in such a system. Even though the notion of keeping the regulation system in one position all the time is sound, it is hard to know how that works out in practice and if the regulation system is more or less stable as a result of being able to spin around freely as your wrist moves. More so, there is always added mechanical inefficiency when additional parts are added to a gear train. Power needs to move into the regulation system and then back out of it with as little loss as possible. Given that this system adds to the traditional layout of parts in a mechanical watch movement simply raises interesting questions about how it performs. 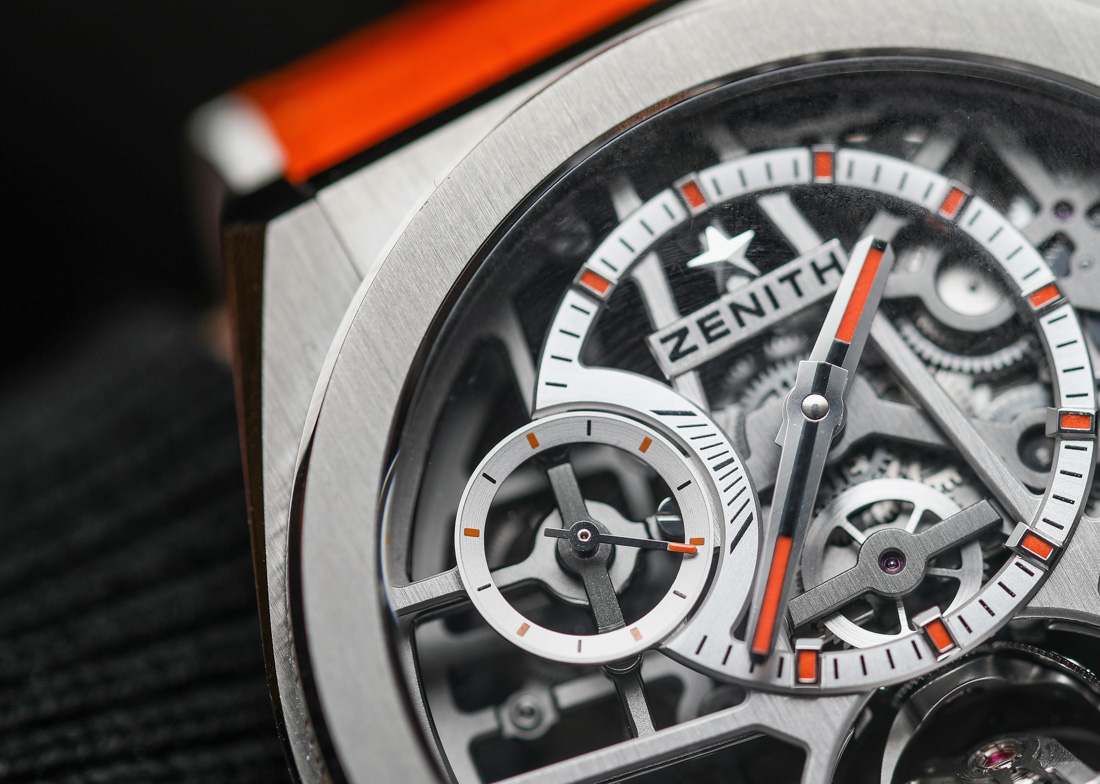 Watch companies rarely publish movement performance results mostly because the performance between two seemingly identical movements can differ. Thus, the performance of one movement isn’t the same as another, and movements such as the caliber 8812 S are individually adjusted for accuracy.

Operating at 5Hz with 50 hours of power reserve, the manually-wound caliber 8812 S features the time, separate display for the seconds, as well as a power reserve indicator. Most of the visual appeal is in watching the Zero G system move around inside of the movement as you move your wrist around. This is a very “animated” watch given the movement of the parts, which is a direct part of its consumer appeal. As I mentioned above, Zenith is now able to offer a Zero G-based movement without the case bubble. Previous to this Defy Zero G watch, other timepieces with this system required a rather large bubble on the front or rear sapphire crystal. For 2018 Zenith simply downsized the Zero G system itself making it smaller. This effort in miniaturization allowed the entire Zero G system to be housed in the case without any need for a bubble. The bubbles were quirky, but not particularly attractive or desired by collectors.

Zenith offers a very modern look to the movement itself, with an emphasis on a star-shaped motif in the bridge on the front, and an overall good use of skeletonization to bring out the inner nuances of the finely made mechanism. Orange accents on the hands and markers provide legibility for reading the indicators.

For 2018 Zenith is offering the Defy Zero G watches in either 18k pink gold or titanium, which is what this Swizz Beatz edition of the watch is offered in. The lightweight metal goes with the theme and helps make the 44mm wide (and 14.85mm thick) Defy Zero G watch the most wearable of all the Zero G timepieces to date, in my opinion. Attached to this limited edition model is a white rubber strap with orange-colored alligator lining. Inside the strap is an inscription written by Swizz Beatz. Price has not been shared just yet but we will update you as soon as we can. zenith-watches.com