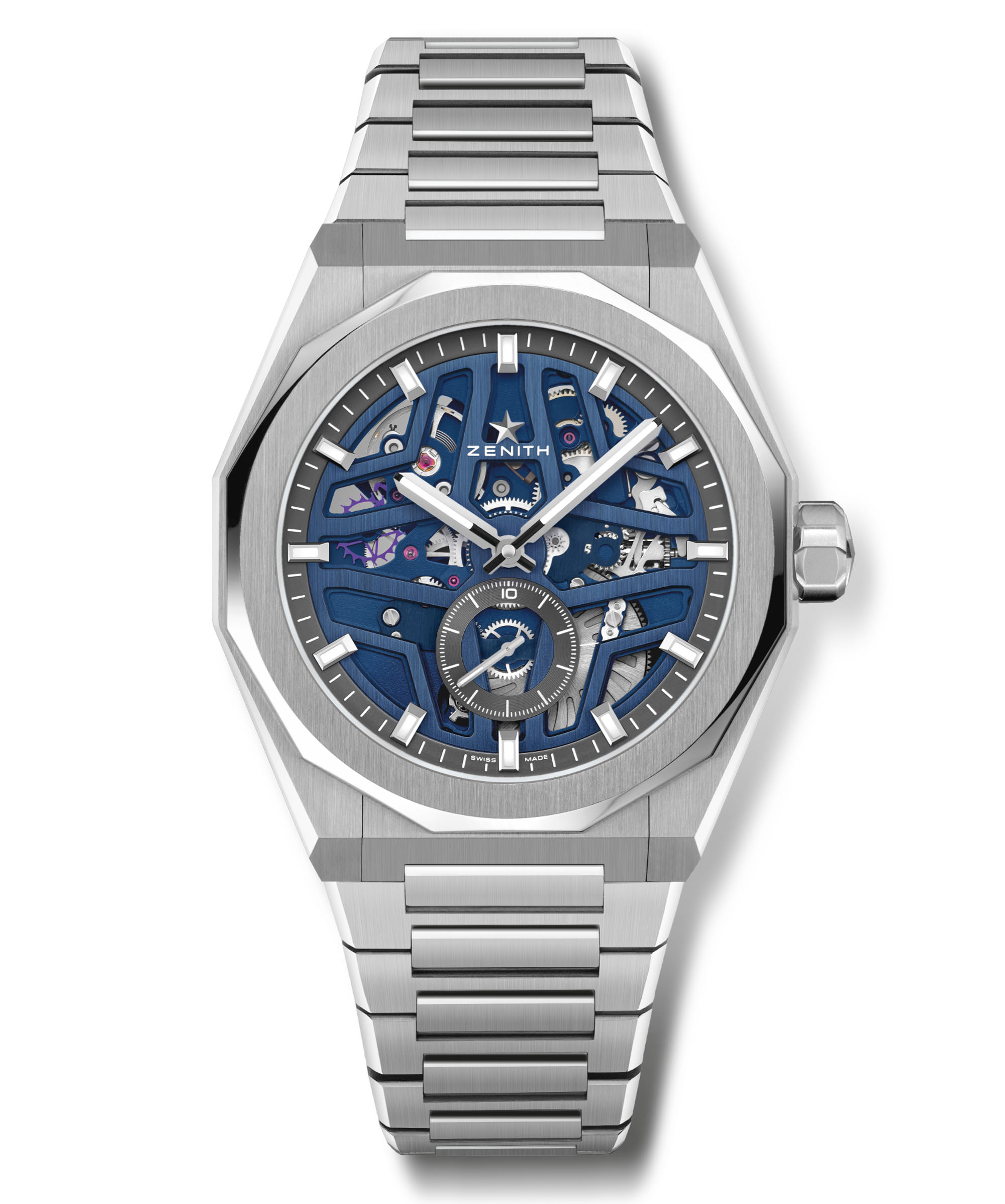 Chronographs are often the type of watch chosen for high-frequency movements, as their stopwatch functionality is perfectly suited to utilizing the precise timing capabilities that accompany higher operating rates. While you will find plenty of simple three-handed watches that incorporate high-frequency movements, when Zenith unveiled the original Defy Skyline at LVMH Watch Week last year, it caught a number of collectors off-guard, as it represented somewhat of an unusual paradox. On one hand, it was a watch powered by a version of the same high-beat El Primero movement that is found inside Zenith’s famous chronographs that can measure times down to one-tenth of a second. On the other hand, it also followed a simple time-and-date configuration, and it lacked even a centrally mounted seconds hand. Despite having a rather advanced movement, the display of the watch was deceptively simple and other than having a rapidly moving small-seconds hand, the watch itself didn’t really give the impression that it contained a rather special high-frequency caliber. If the goal of the original Skyline model was to hide the complexity of its movement, the objective of the new Zenith Defy Skyline Skeleton is to put it on full display, and the new watch features a highly open-worked dial that showcases a reworked version of the brand’s high-beat El Primero 3620 movement. 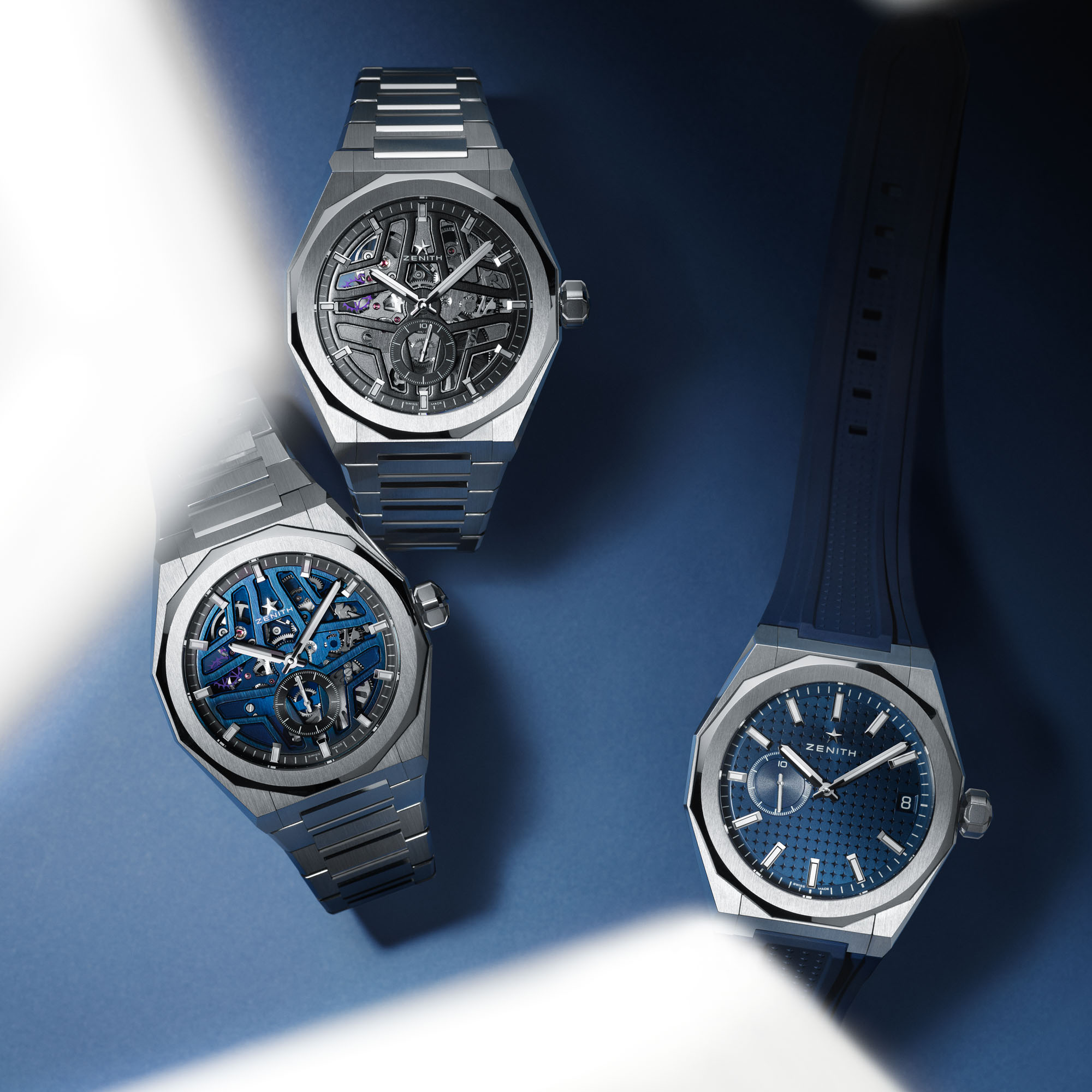 Crafted from stainless steel and measuring 41mm in diameter, the outer case of the new Zenith Defy Skyline Skeleton appears to have been carried over from the inaugural model that was unveiled last year, and it features an angular and faceted case with integrated lugs and a fixed twelve-sided bezel. Although a stainless steel sports watch with an integrated bracelet and angular bezel is a popular style of timepiece that a lot of brands are producing right now, Zenith’s Skyline series actually draws its inspiration from the brand’s original Defy watches that first made an appearance in 1969. That said, the Skyline range is very much a modernized version of this original design ethos, and in addition to having a significantly more contemporary aesthetic, the case of the new Zenith Defy Skyline Skeleton also benefits from a number of modern updates such as a flat sapphire crystal protecting the dial and a screw-on display caseback to showcase its high-frequency automatic movement. A signed crown at the 3 o’clock location offers access to the movement, and it screws down to the case in order to help create 100 meters of water resistance. 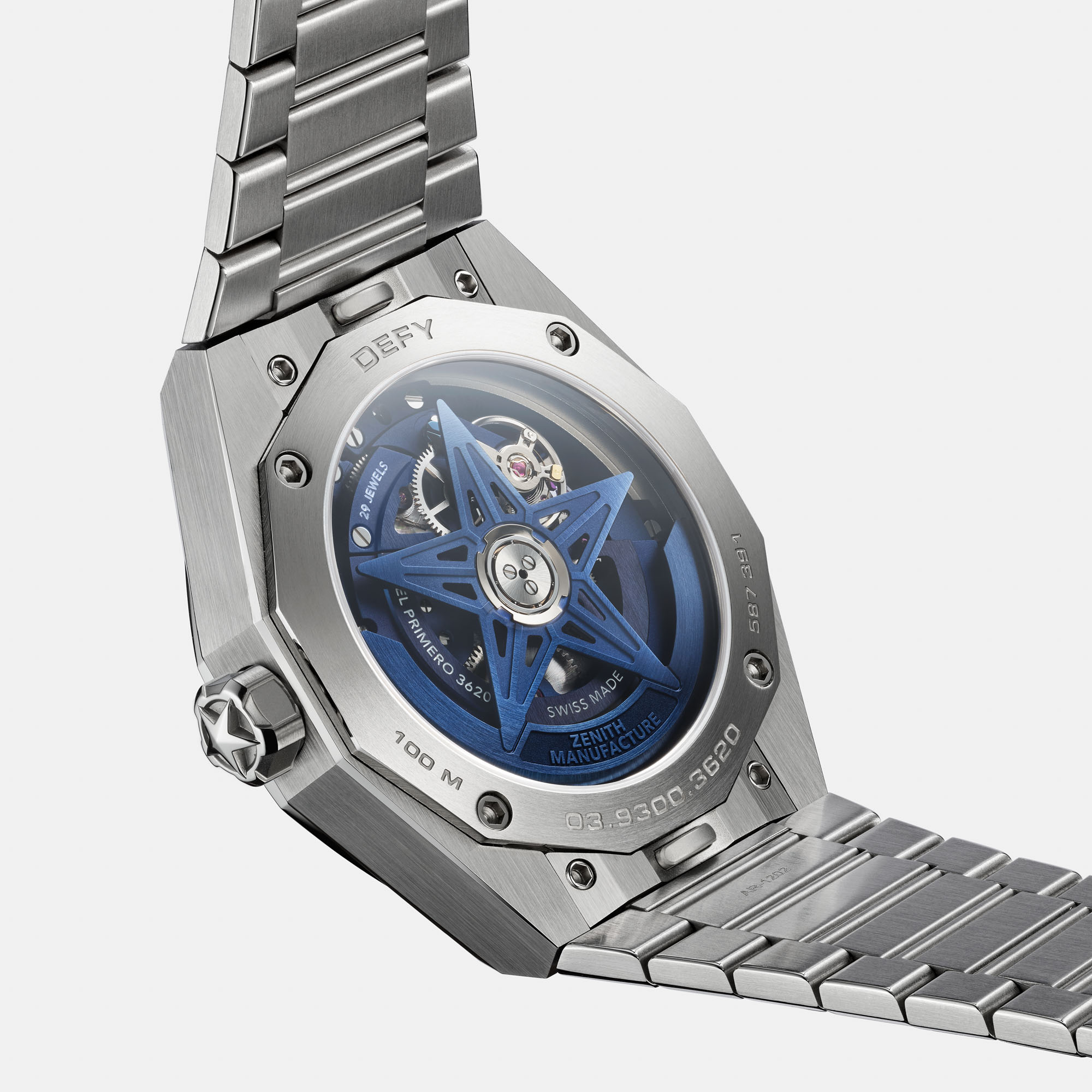 Like most skeletonized watches, the visual party piece of the new Zenith Defy Skyline Skeleton is its open-worked dial and skeletonized high-beat movement. Available in either black or blue, the colorways aren’t just limited to the dials, and the open-worked movements themselves also feature bridges that are finished in a matching hue of blue or black for a highly cohesive overall aesthetic. The cutouts in the dial offer a symmetrical appearance that forms the shape of a four-pointed star, while the chapter ring surrounding the dial contains applied baton markers that offer a fairly legible display, despite the fairly busy visual aesthetic of the watch. At the 6 o’clock location is a small-seconds hand that makes one full rotation every ten seconds (rather than every minute), and at the center of the dial are a pair of skeletonized hour and minute hands that are responsible for displaying the time. Additionally, both of the centrally-mounted hands, along with each one of the hour markers are finished with Super-LumiNova C1 for added legibility in the dark. 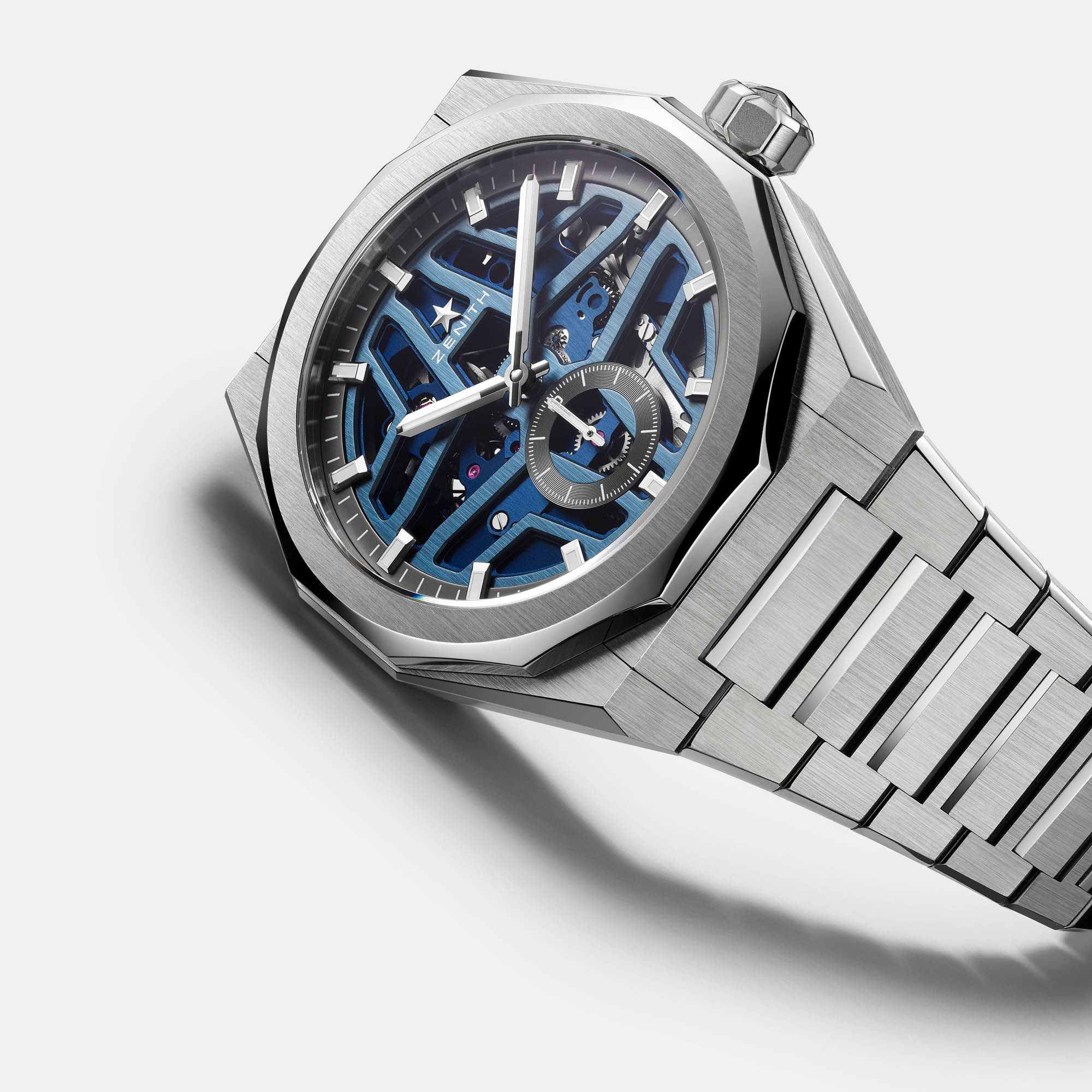 Aside from having a skeletonized dial, the two other most significant updates to accompany the new Zenith Defy Skyline Skeleton are the repositioning of its running seconds hand and the removal of its date display. On the inaugural Skyline model, the running seconds register was at 9 o’clock, while the date window sat opposite it at the 3 o’clock location. On the new Defy Skyline Skeleton, the running seconds hand has been moved to the 6 o’clock location for a more symmetrical layout, while the date complication has been removed entirely in order to offer an unobstructed view of its open-worked movement. Calendar mechanisms typically sit directly under the dial, and when left in place, they can often defeat much of the intended effect created by a skeletonized display. By omitting the various components of the calendar complication (such as the date wheel itself, which occupies a fairly significant amount of visible space), the Zenith Defy Skyline Skeleton is able to offer a significantly better view of the most visually interesting areas of its high-frequency movement. 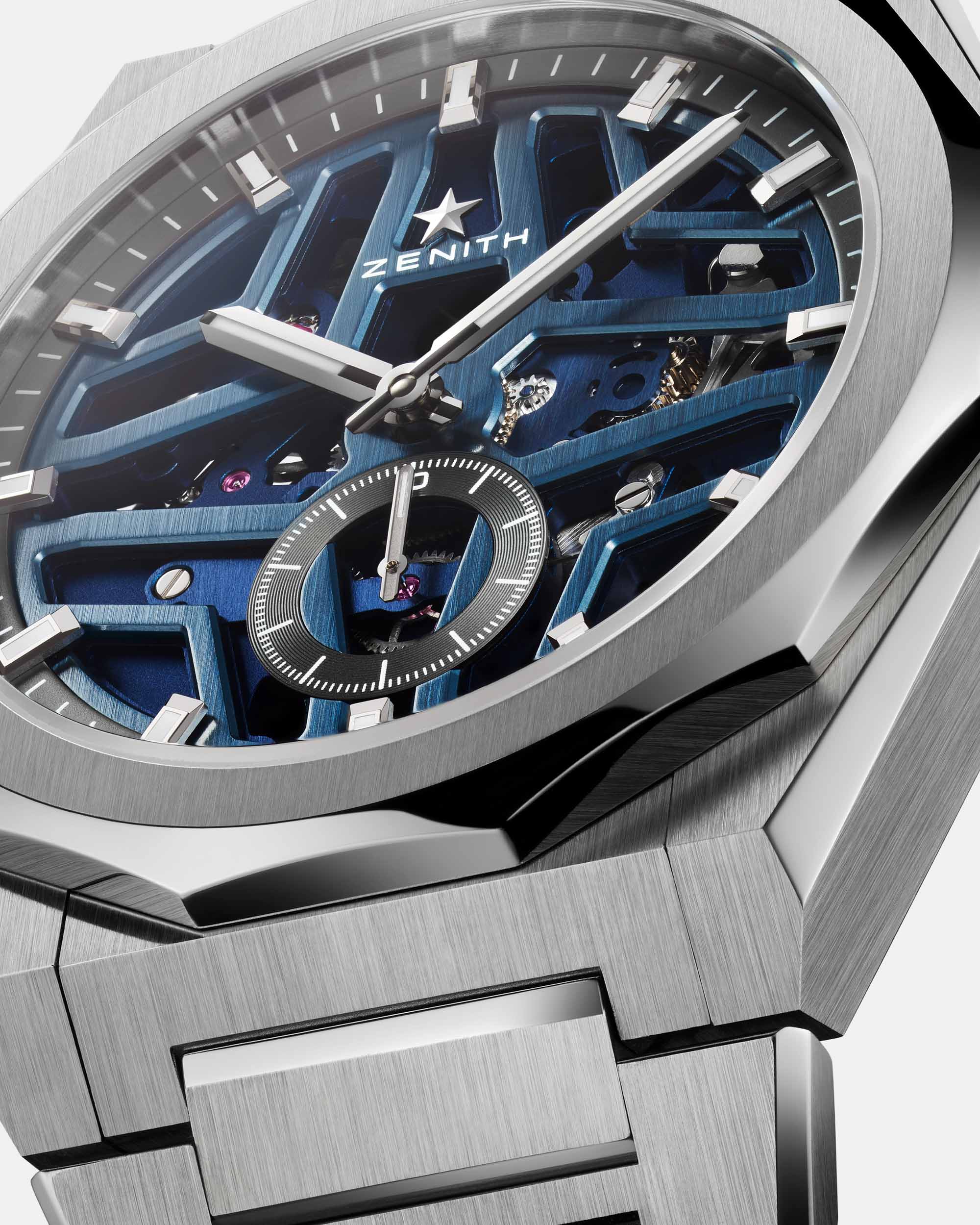 While aesthetics are certainly a key part of the equation, the primary purpose of skeletonization in watchmaking is to show off the internal movement. With that in mind, there isn’t much point in showing off the mundane, and if you are going to bother making a skeletonized watch in the first place, it ideally should be one that is powered by a rather interesting caliber. In this area, the Zenith Defy Skyline Skeleton doesn’t disappoint, and fully visible through both the open-worked dial and sapphire caseback window is the El Primero 3620 SK automatic movement. Running at a frequency of 36,000vph (5 Hz) and offering users a power reserve of approximately 60 hours, the El Primero 3620 features a silicon escape wheel and it drives the 1/10th of a second hand directly from its escapement, which allows it to naturally display partial seconds. The El Primero 3620 SK is more-or-less a stripped-down and skeletonized version of the high-frequency caliber used to power Zenith’s famous tenth-of-a-second chronograph watches, and despite the fact that it is essentially just a time-only movement, its rapidly moving seconds hand still allows it to measure a tenth of a second — even if that functionality is relegated to a small hand at the 6 o’clock location. 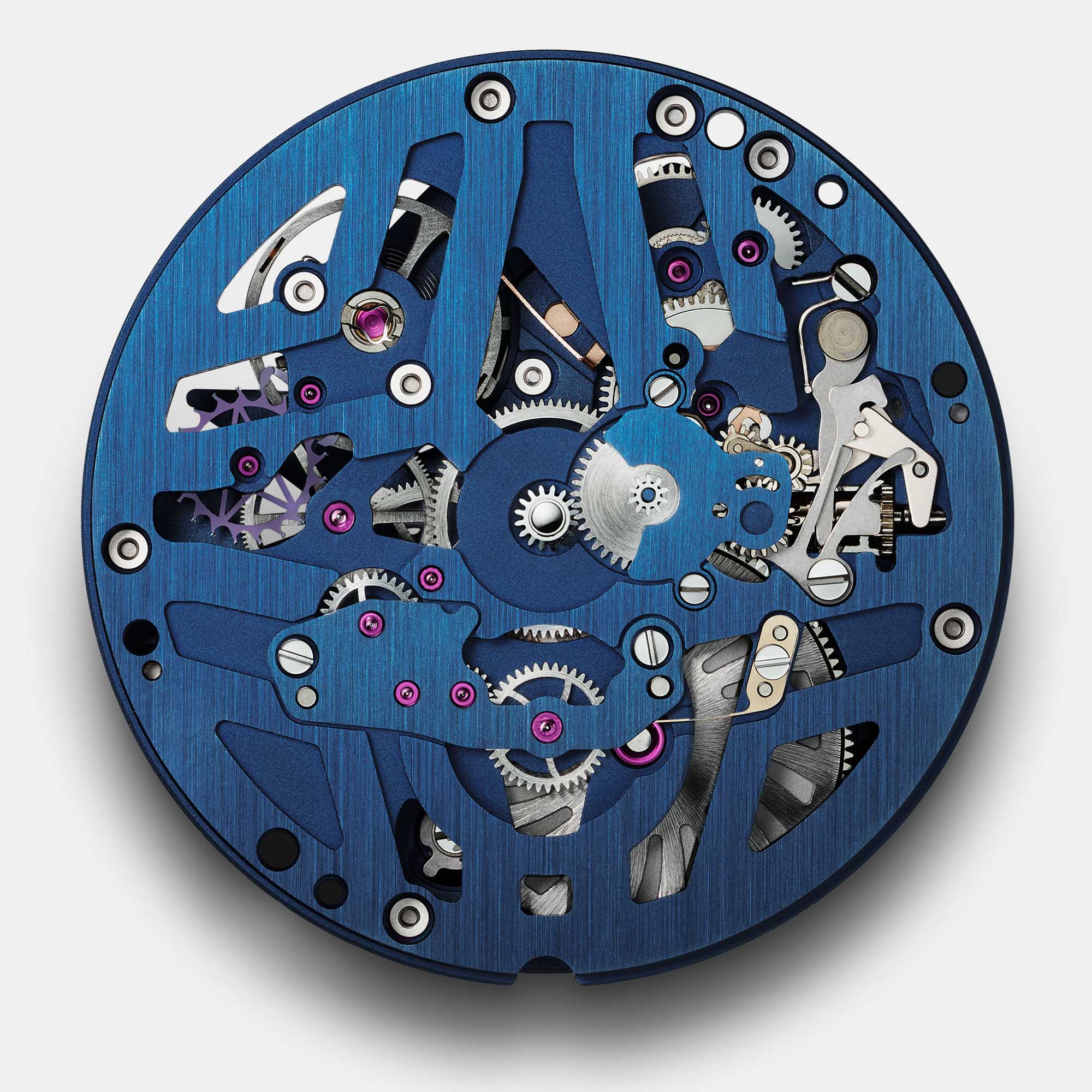 Similar to the original Skyline model, the new Zenith Defy Skyline Skeleton comes with both a stainless steel bracelet and a textured rubber strap that matches the color of its dial and movement. The bracelet offers an angular H-link design with brushed surfaces and polished chamfers along its sides that echo the facets on its case. Meanwhile, the included rubber strap gives the watch a significantly more sporty overall appearance, and it features a stainless steel folding buckle that joins the two ends together on the bottom of the wrist. Most importantly, swapping between the two options is a quick and tool-free process that involves nothing more than pressing the two small buttons on the underside of the integrated lugs, pulling out the current strap or bracelet, and then plugging the other one back in its place. Given that the Defy Skyline Skeleton features integrated lugs, you are more-or-less stuck with a proprietary strap attachment system, and the fact that Zenith includes both options with the watch is a nice touch that provides it with two different personalities right out of the box. 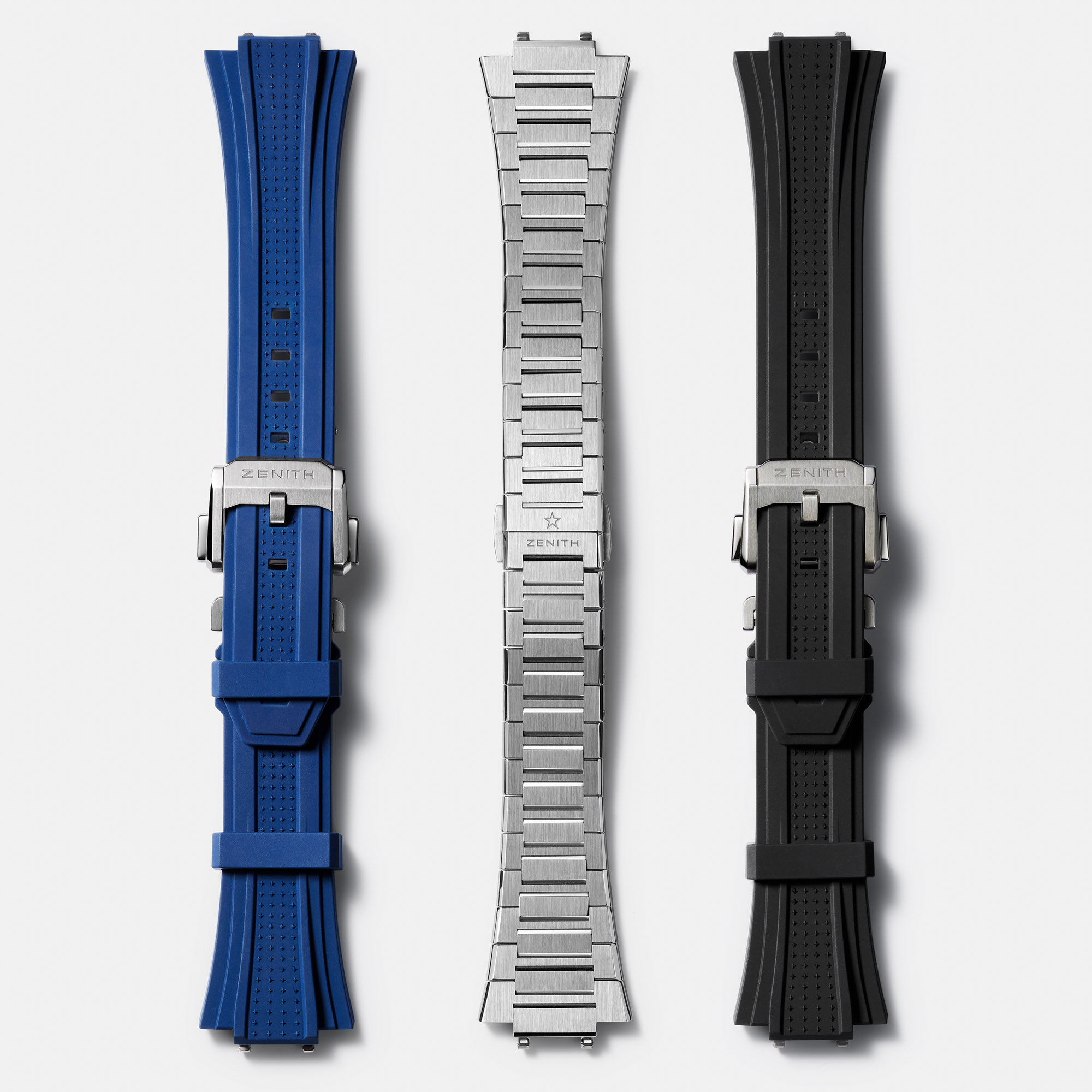 Skeletonized watches are often like track-spec versions of cars in that you often end up paying more for something that technically offers less. That said, what is offered is quite a bit more special than what you get with the standard variety, and this is ultimately what justifies their higher price points. This is certainly the case for the new Zenith Defy Skyline Skeleton, and in the same way that a track-spec version of a car might forego a navigation system and sunroof for better handling and a superior power-to-weight ratio, the Defy Skyline Skeleton gets rid of a date window and a dial (for the most part), in order to achieve a much more balanced and visually striking display. That said, in much the same way that the track-spec version of a car will almost always cost more than its standard counterpart, the skeletonized version of the Defy Skyline costs over two grand more than Zenith’s standard Skyline model, and it is accompanied by an official retail price of $11,000 USD. There are a number of other models in Zenith’s modern catalog that offer a similar open-worked aesthetic for quite a bit less money, but the Defy Skyline Skeleton isn’t just another skeletonized watch, but rather one that is primarily intended to showcase its high-frequency movement. For anyone who enjoyed the concept of the original Skyline model but felt that it was just a little too plain given what it was packing under the hood, the Defy Skyline Skeleton makes a perfect alternative that places its high-frequency movement on full display. For more information, please visit the brand’s website.