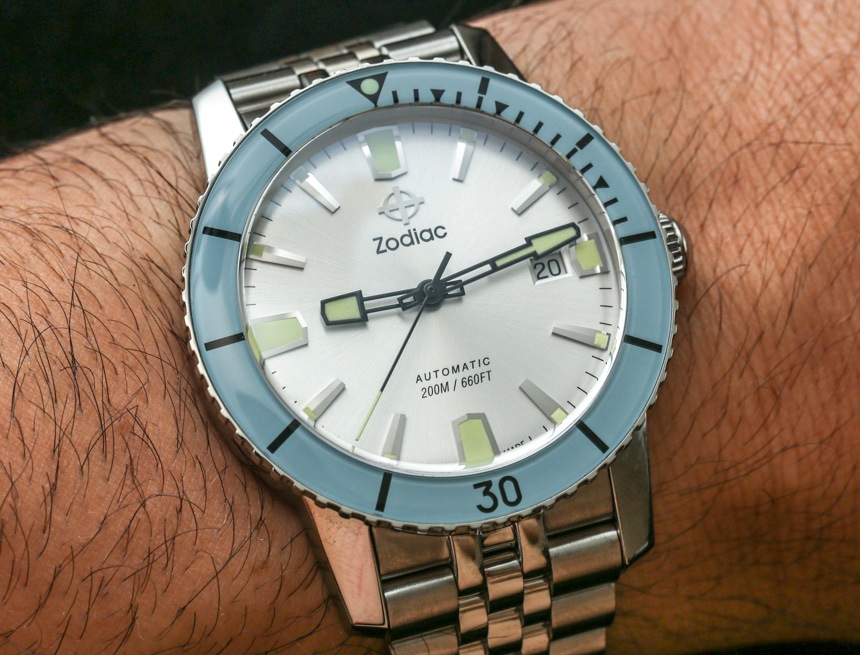 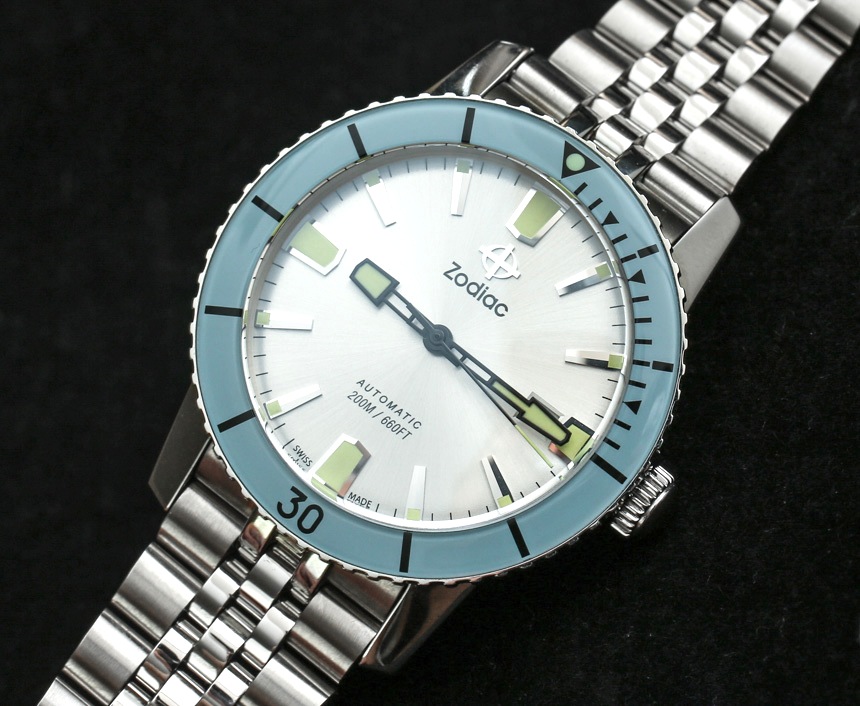 I continue to enjoy the “Heritage” collection from Zodiac which takes classic designs from the brand’s history and makes them “new” again. Today, I am going to review one version of the Zodiac Sea Wolf collection – specifically, the Zodiac Sea Wolf 53 Compression that happens to be a limited edition known as the reference ZO9254. There are some real gems in this collection which combine style, wearability, and am impressive value proposition.

Zodiac is probably the most high-end name at the Fossil Group right now, and that is something worth pointing out more than once. The Fossil Group enjoys things like being able to claim that they sell more timepieces in America than anyone else thanks to producing Michael Kors watches. Of course, there is also the entire universe of Fossil-branded watches which fall into the “fashion watch” market. Fossil actually invented the fashion watch market. Still, over the last few years, Fossil has been putting a lot of resources into things like making their own mechanical movements and creating timepieces viable not just for mass market consumption, but also for watch enthusiasts. 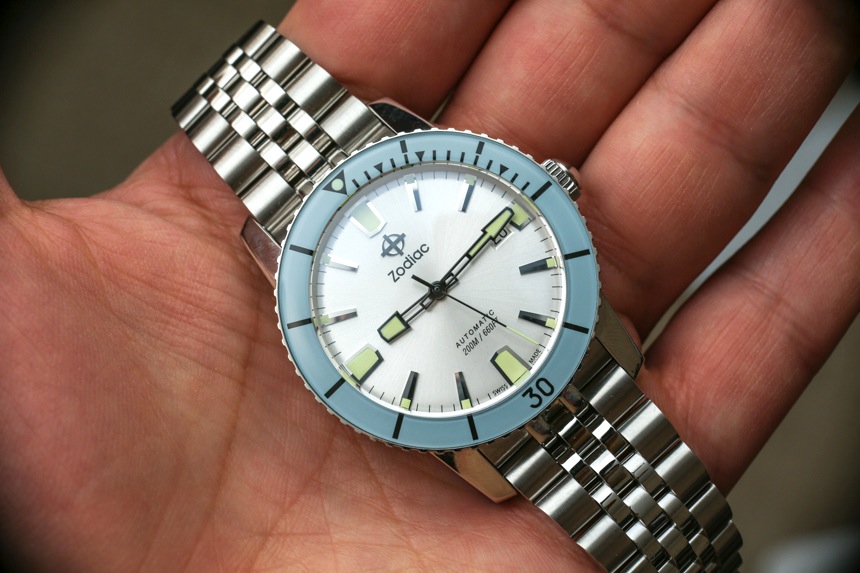 There are a lot of messages to extract from the above statements, but one of them is that even if you’ve never liked anything Fossil has produced in the past – there is a good chance that what Zodiac is doing will appeal to you. The last Zodiac “Heritage” collection timepiece that we reviewed was the Astrographic here.

I am going to start by talking about the movement. The Fossil Group recently opened up their own watch movement manufacturer in Switzerland known as STP. It isn’t entirely clear yet what Fossil intends on doing with the manufacturer, but what is known is that they are producing a lot of basic ETA-equivalent movements in the way Sellita did when they were newer. In fact, Sellita continues to pretty much only sell ETA clones. Inside the Zodiac Sea Wolf 53 Compression – as well as many other mechanical Zodiac watches – is a movement known as the SPT1-11. 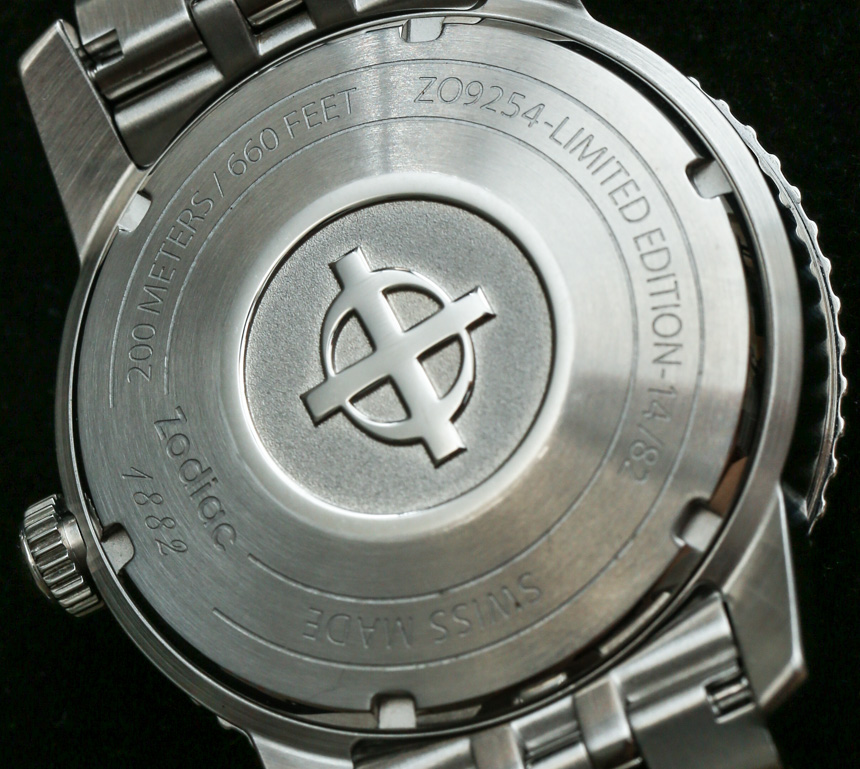 Will these movements exist just for Fossil Group brand watches, or will STP movements find their way into other timepieces as a wholesaler? I don’t know. For now, what you need to know is that the STP1-11 automatic is an in-house-made movement with very similar tech specs as an ETA 2824. In terms of pricing and competition, that means the Zodiac Sea Wolf is one of the least expensive Swiss watches with an in-house-made movement, putting it in a similar space as watches from brands like Hamilton and Tissot from the Swatch Group that have movements from ETA (which is a company also owned by the Swatch Group).

The movement isn’t visible through the solid steel caseback, but I have seen it in other watches (like the Astrographic) and it looks pretty nice. I am actually curious to know what other movements STP makes now or will produce in the future after this three-hand-with-date caliber. 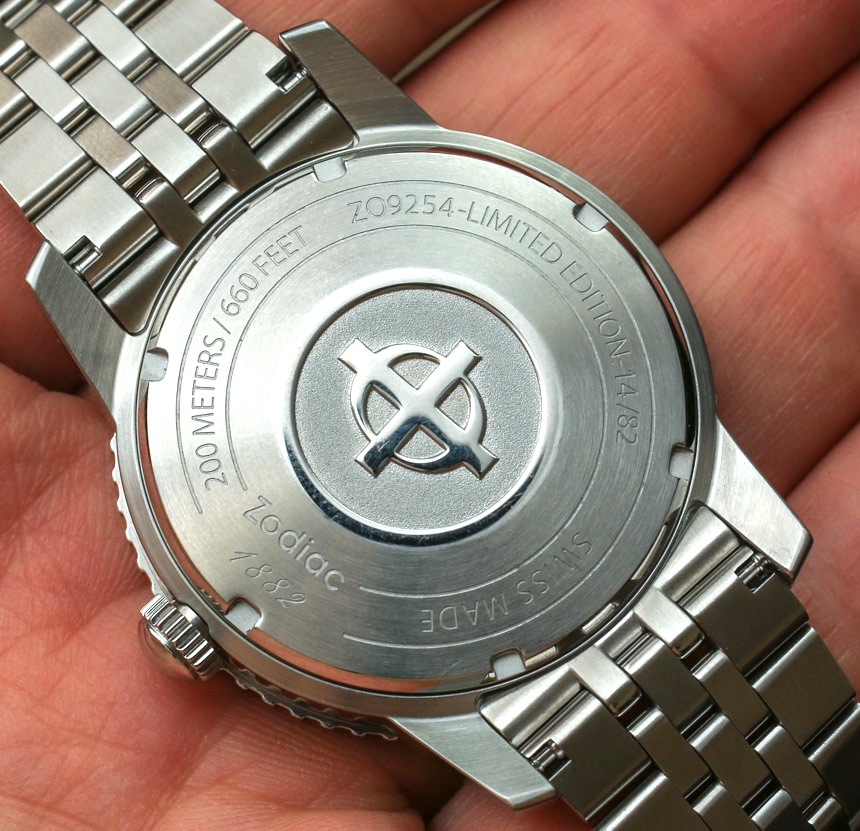 At 40mm wide, the Zodiac Sea Wolf is larger than its historic analog but decidedly medium by today’s standards. I like this size a lot because it is very versatile and can even work in more formal situations. The 40mm-wide size is very comfortable and further looks good with short or long sleeves. If you are a larger guy, then it is possible 40mm wide might look too small. While I prefer 42mm-wide watches or larger generally, there is a great feel to the Zodiac Sea Wolf case. 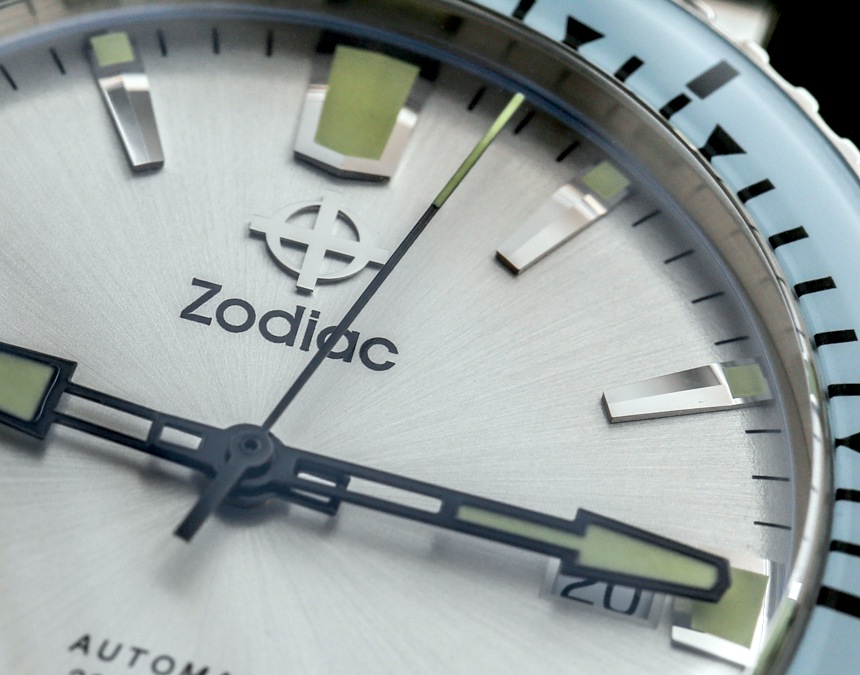 The Sea Wolf is actually the name of one of Zodiac’s first watches. I believe the original Zodiac Sea Wolf watch came out in the early 1950s and, according to Zodiac, was one of the first commercial dive watches ever produced. The modern Zodiac Sea Wolf case is water resistant to 200 meters. If you need more water resistance, you can also get the Zodiac Super Sea Wolf (reviewed here), which is a rather different model, also produced today in the Zodiac Heritage collection – and it is water resistant to 1000 meters. 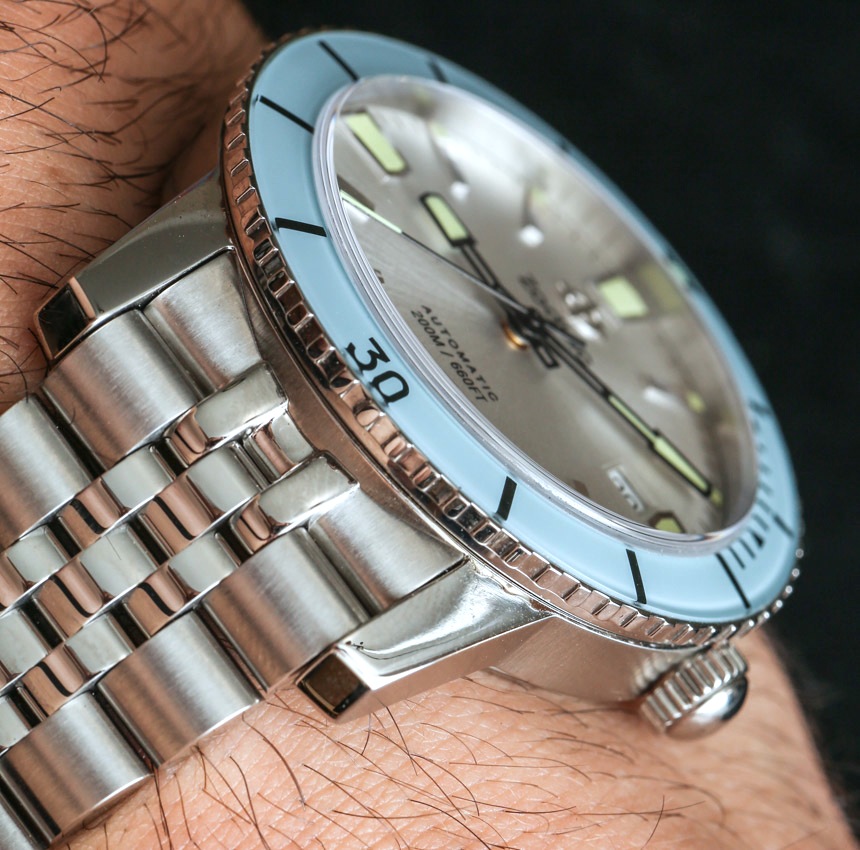 According to Zodiac, the Sea Wolf case is 14mm thick but, honestly, it wears thinner. This is because of the slight “bubble-style” caseback and the vintage-style, slightly protruding sapphire crystal over the dial. This means that the case at the edges is a few millimeters thinner and this Zodiac Sea Wolf 53 Compression has a very low-wearing profile.

Case finishing is very impressive for the price. In fact, overall detailing on the watch is fantastic, even though it is clearly volume-produced. An example is the smooth transition between the various types of finishes on the steel case. A cheaply produced case has very harsh if not ugly transitions from, say, a polished to a brushed surface. A good sign of quality and care in production is cases that have very specific and precise transitions from one finishing to another. I find this quality to be true of most all the new Zodiac Heritage collection watches that I’ve handled. 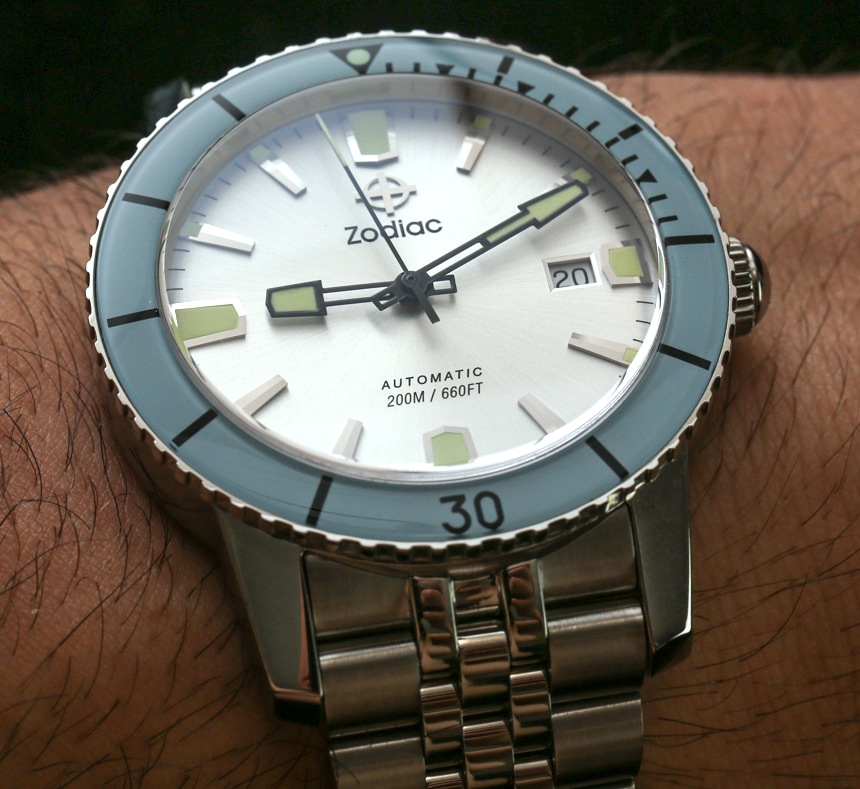 Longer lugs help the 40mm-wide case appear slightly larger, and the “Jubilee-style” bracelet, which is clearly Rolex-inspired, looks very nice with the retro sporty theme of the watch. Nevertheless, the transition between lugs and bracelet is not as elegant as it could have been; though this is a minor point, and it isn’t unattractive. Zodiac offers other versions of the Sea Wolf on a range of handsome straps that are designed to match the dials’ colors very nicely.