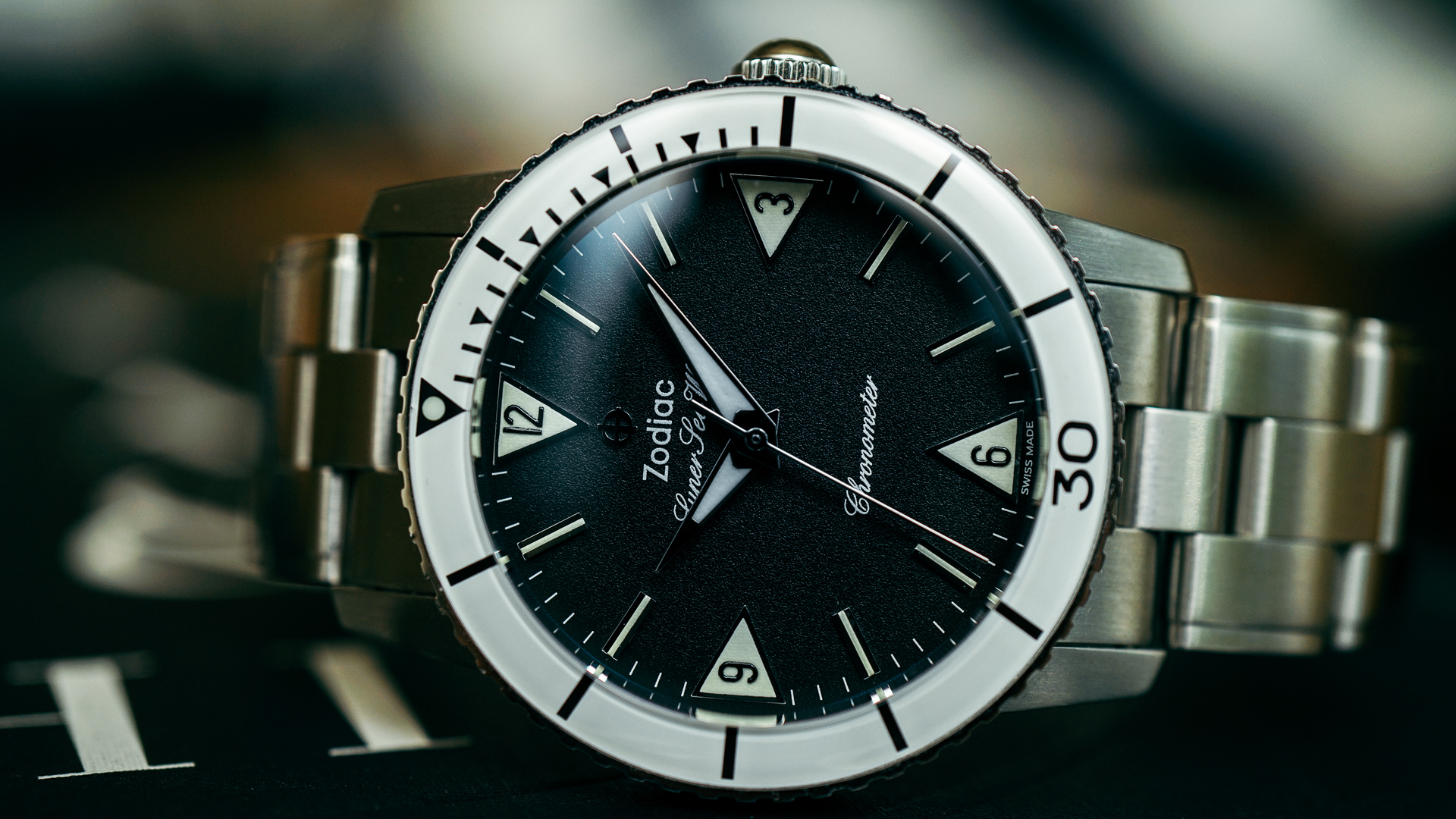 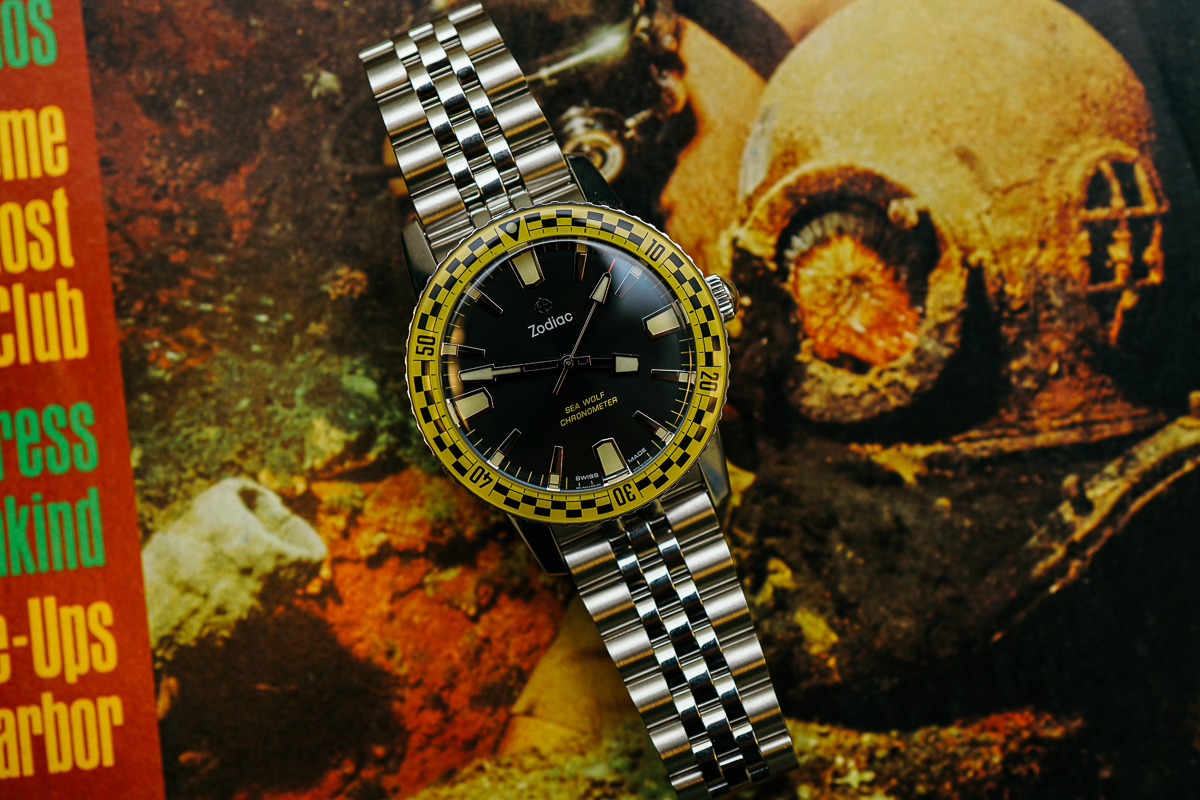 Here’s a neat bit of trivia: adjusted for inflation, a Zodiac Sea Wolf costs now, almost exactly what it did back in 1953 when the brand’s signature dive watch was released. Now, even as imprecise as most modern inflation calculators might be, the fact remains that there are precious few Swiss watch brands that are as faithful to their vintage archives as they are to their original value proposition. A quick look at Zodiac’s competition during the pioneering days of sport diving – specifically Rolex and Blancpain – tells the rest of the story. 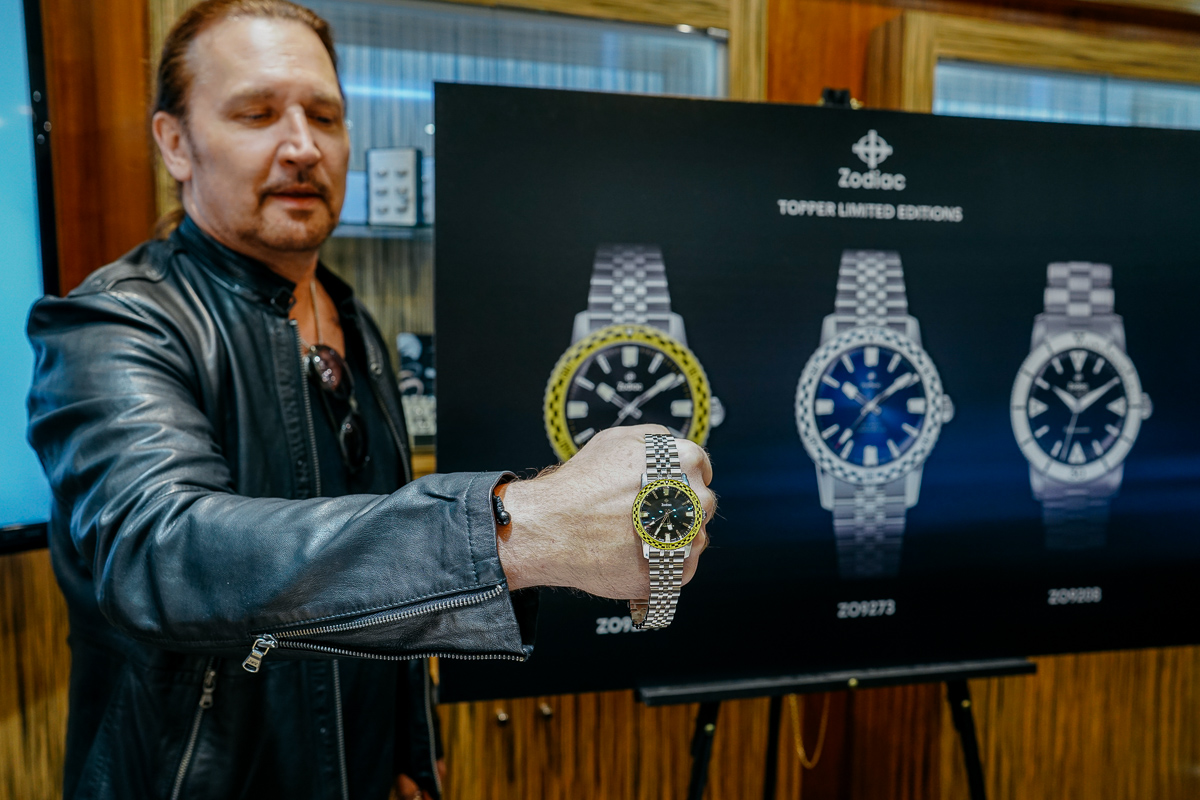 We were recently on hand for the unveiling of the latest chapter in that ongoing Sea Wolf story: a colorful and affordable three-piece capsule collection of archive-inspired watches designed in part by Eric Singer exclusively for Topper Jewelers in Burlingame, California. As the drummer (the “timekeeper” in his words) for the long-running rock band KISS, Singer also happens to be a noted watch collector with a keen eye for design – a sensibility that not only earned him a spot on the Grand Prix D’Horlogerie De Genève (GPHG) judging panel, but one that’s seen him help with the design for multiple Zodiac dive watches. It’s the second time he’s collaborated with Rob Caplan at Topper Jewelers on designing a limited-edition series of Sea Wolf watches, and this go-around is arguably their strongest effort yet. 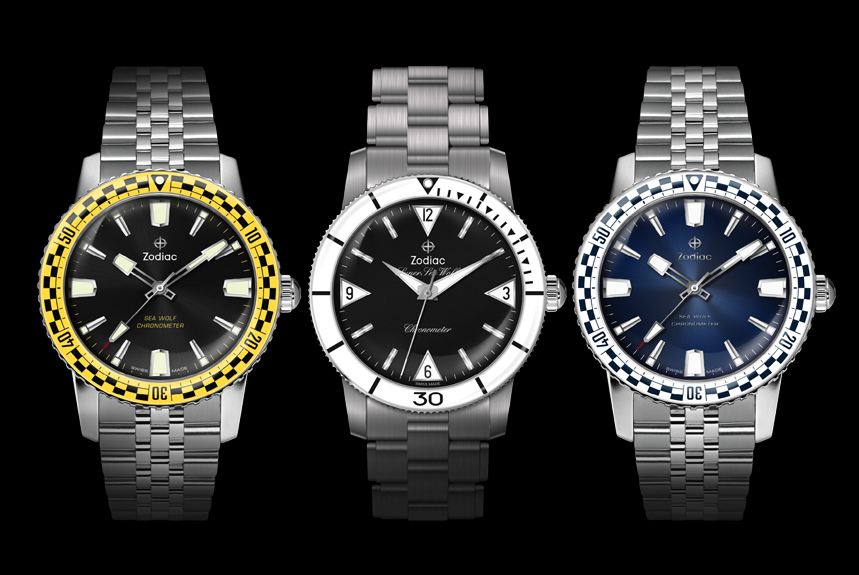 What’s interesting about the new ’Series II’ collection is that though each model adheres closely to the spirit of the original Sea Wolf, none of them are exact reproductions of anything in the brand’s archive. This enabled the design process to utilize the same case platform for each – Zodiac’s ‘Compression’ style case (bear in mind that though this is Zodiac’s historical term for this case, it’s not to be confused with a true, twin-crown “compressor” style case), which measures a svelte 40mm by 11mm thick, with a 48mm lug-to-lug distance and 20mm between the lugs. . And with a screw-down crown and caseback yielding 200m of water resistance, it’s as capable as it is comfortable on a wide variety of wrists. 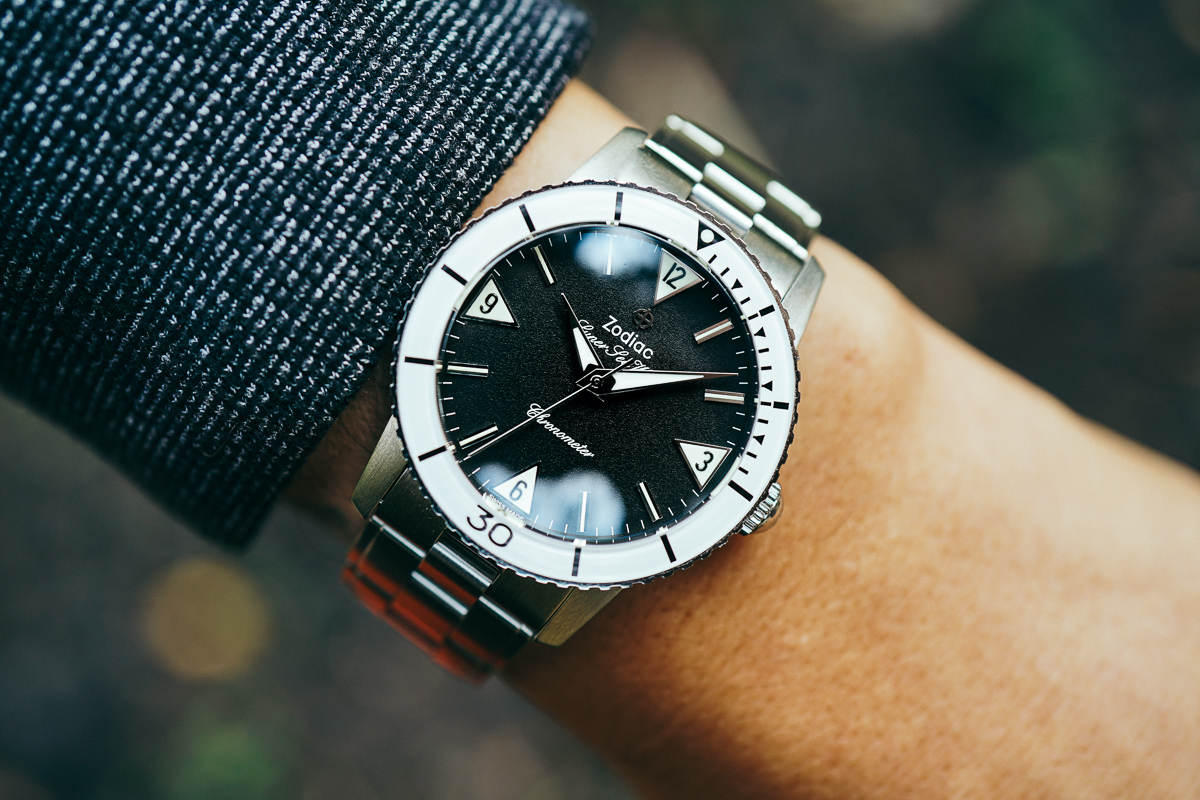 Singer was quick to point out that despite being 100% original, all three models carry enough of the distinct Sea Wolf DNA and direct design elements from past vintage models, that they could be misinterpreted for direct re-issues. One primary goal of the capsule was to revisit the quirky bezel design and colors of one of the rarest Sea Wolf watches in the archive: the checkered ‘Rally’ bezel variant. It’s highly possible at the time that this bezel was inspired by another dive watch bezel of the time: the Jenny Caribbean 300, which displayed a full decompression table within its 60-minute counter that a diver could use to determine when he would need to surface after spending any given amount of time at his pre-determined depth. Since this design was patented, it almost looks as though Zodiac simply omitted the decompression table, leaving behind a cool, taxicab-inspired motif. 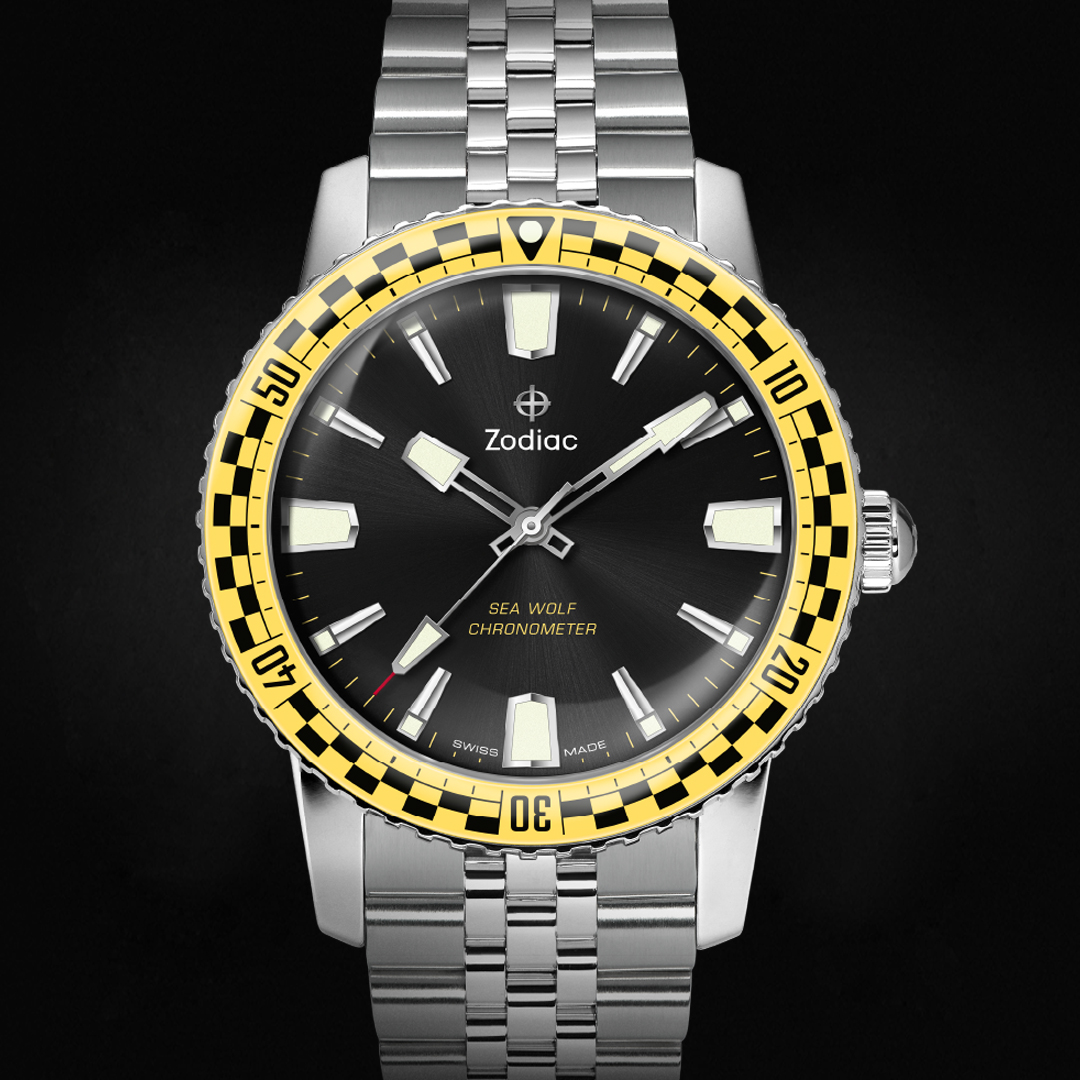 Regardless of origin, the classic ‘Rally’ unidirectional rotating bezel has been faithfully reproduced here in two cheerful tones of yellow (ref. ZO9272) and blue (ref. ZO9273) and built with a highly scratch and fade-resistant mineral glass top ring, which nicely complements the accent colors on each respective dial. One design challenge unique to both of the ‘Rally’ variants was the manufacture of a new oversized luminous seconds hand – custom-built for this specific project to neatly match the color and style of the shovel hands and hour markers found on these dials. 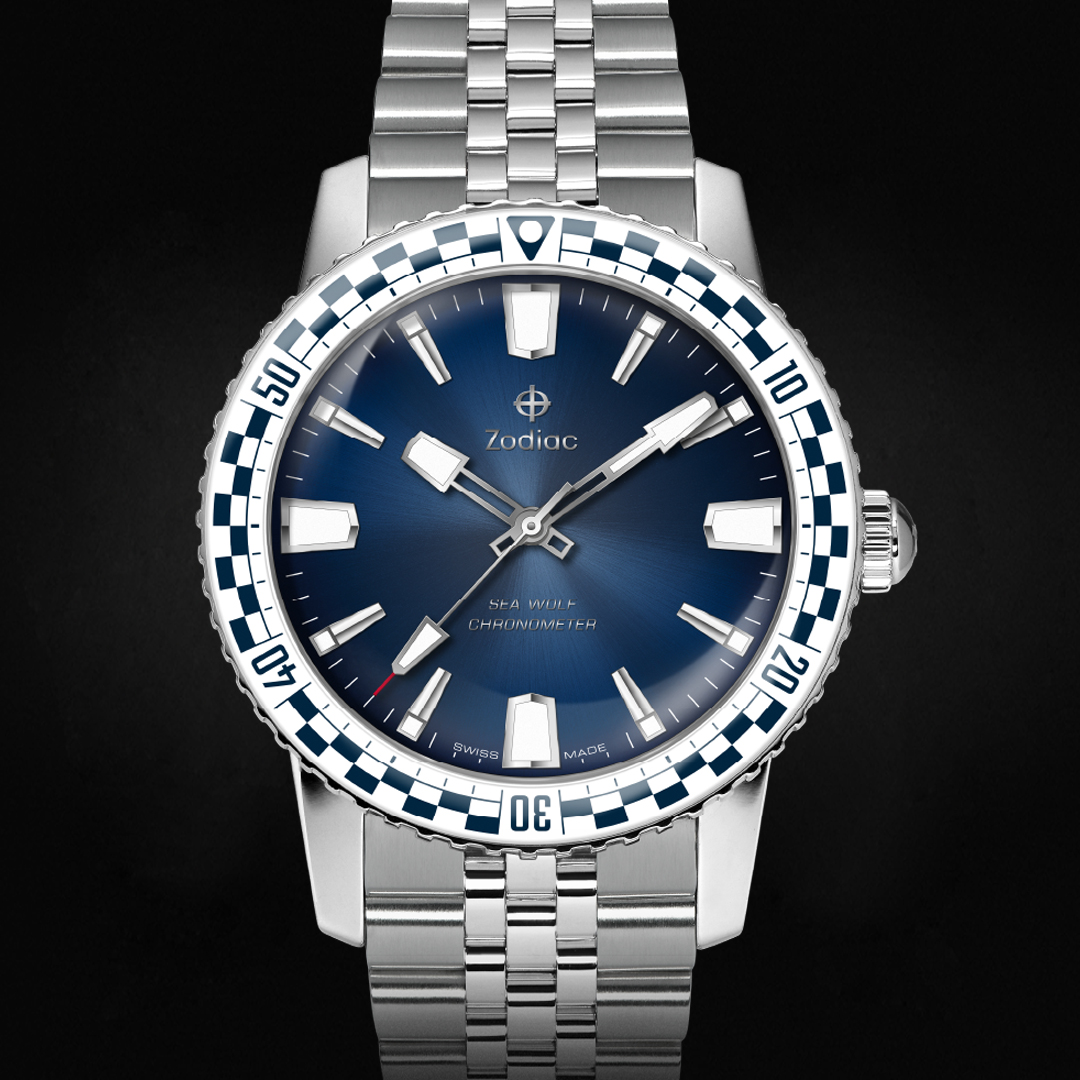 The third watch in the series, ZO9208 – nicknamed ‘White Wolf’ by those in attendance at the launch event – is perhaps the greatest departure from any specific archival model. It gets its nickname from the gloss-white mineral glass bezel, designed to evoke the ‘ghost bezel’ effect found on many vintage Sea Wolf watches, whose blue or yellow bezels would fade to a bright white after years of hard wear and prolonged sun exposure. It also marks the first time that Zodiac has equipped its ‘flag dial’ (denoted by the triangular 12-3-6-9 hour markers) in this modern Compression case. The end result is a stark contrast to the austere, tool watch aesthetic found on both the previous brushed stainless steel or bead-blasted titanium variants. 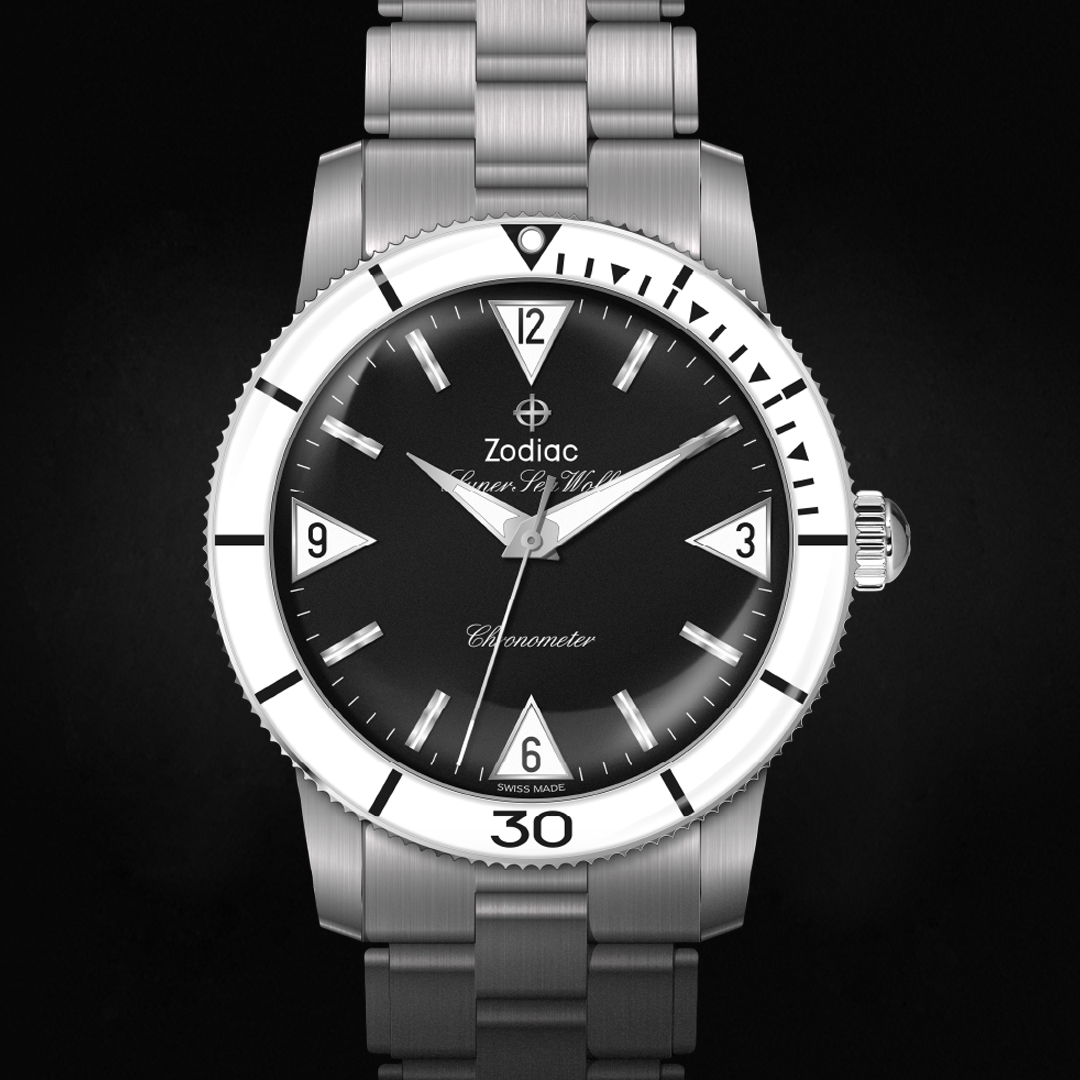 Unlike the Rally references, which both receive Zodiac’s jubilee style bracelet with its expanding clasp, the White Wolf gets a rivet style oyster bracelet (sadly, not real rivets like the Tudor Black Bay) that features an extremely clever adjustment system. Both ends of the bracelet are secured via traditional means – a sturdy bi-folding clasp with a flip lock, but each link on opposing sides of the clasp are spring-loaded, enabling automatic adjustment throughout the day. 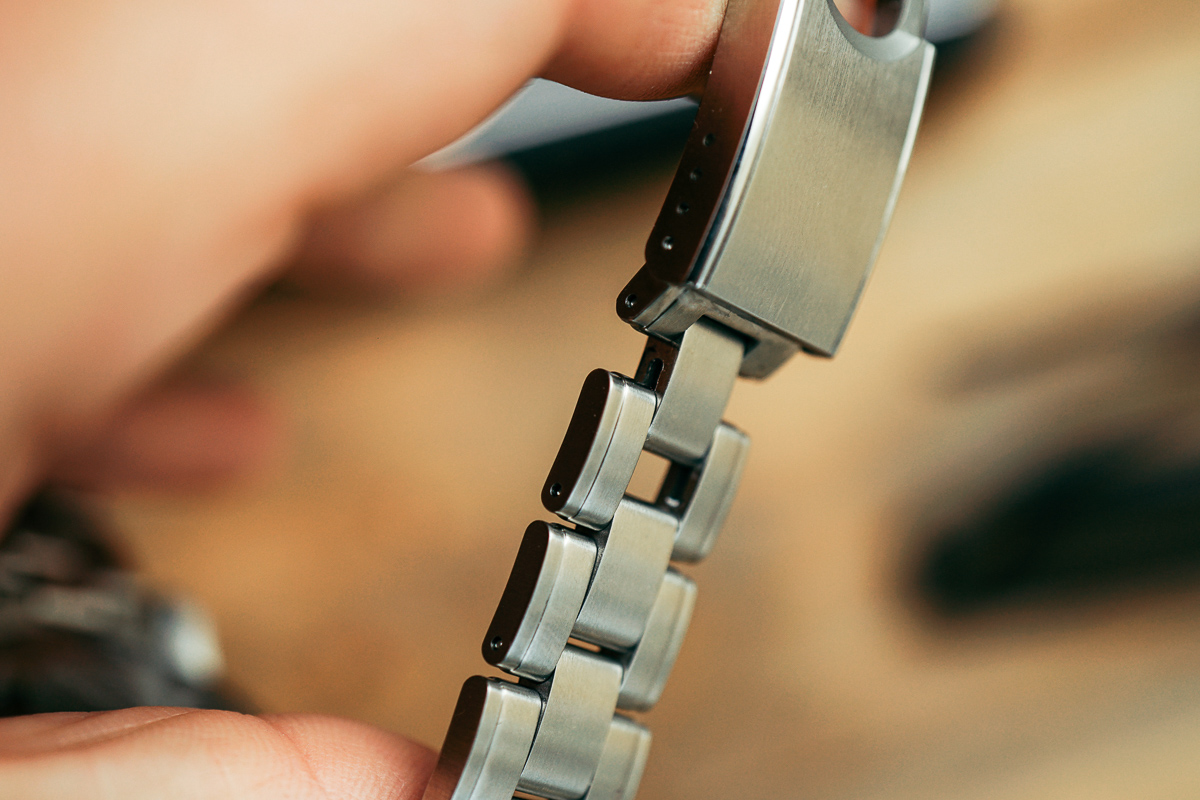 All three of the ‘Series II’ watches are powered by the same caliber: Zodiac’s Swiss-made automatic STP3-13-3, made by Swiss Technology Production. Technically speaking, this could be referred to as an ‘in-house’ manufactured movement (in the same vein one might refer to Swatch Group cousins Longines or Certina who use movements built by fellow Swatch partner ETA) as both Zodiac and STP are owned by Fossil. With 44 hours of power reserve and COSC accuracy, it’s on par with what you’d see from a chronometer-certified 2824. However, this particular movement comes with one additional upgrade in the form of a swan neck regulator; which enables a greater degree of micro-regulation to the watch’s beat rate – thereby potentially increasing its accuracy long-term, once properly adjusted. On a surface level though, most vintage Zodiac divers were equipped with a date, but dive watch purists will appreciate that this is a no-date movement, preserving the classic symmetry found on both dial expressions of the Sea Wolf. 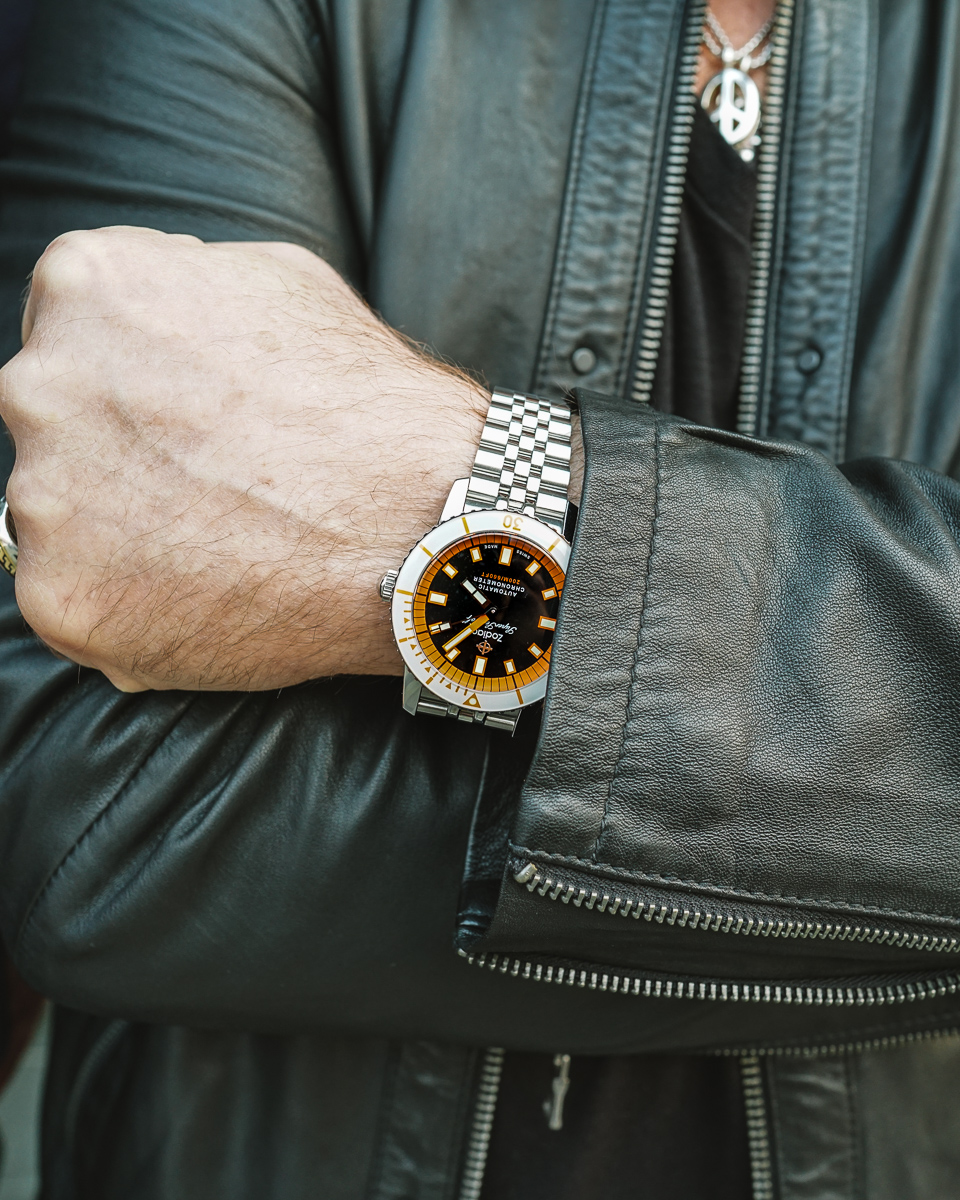 Each piece in the series is limited to 82 pieces and can be pre-ordered right here for a small deposit at Topper Jewelers. Expected delivery for these models isn’t until Spring of 2019, which may seem light years away, but Topper wanted to initiate the pre-order phase before Singer heads out on KISS’ epic ‘End of the Road’ tour – a three-year, 44-date global victory lap, which gets underway in January. The total price of each Sea Wolf will be $1,495, which is a very slight premium on Zodiac’s standard existing bracelet-equipped variants. zodiacwatches.com