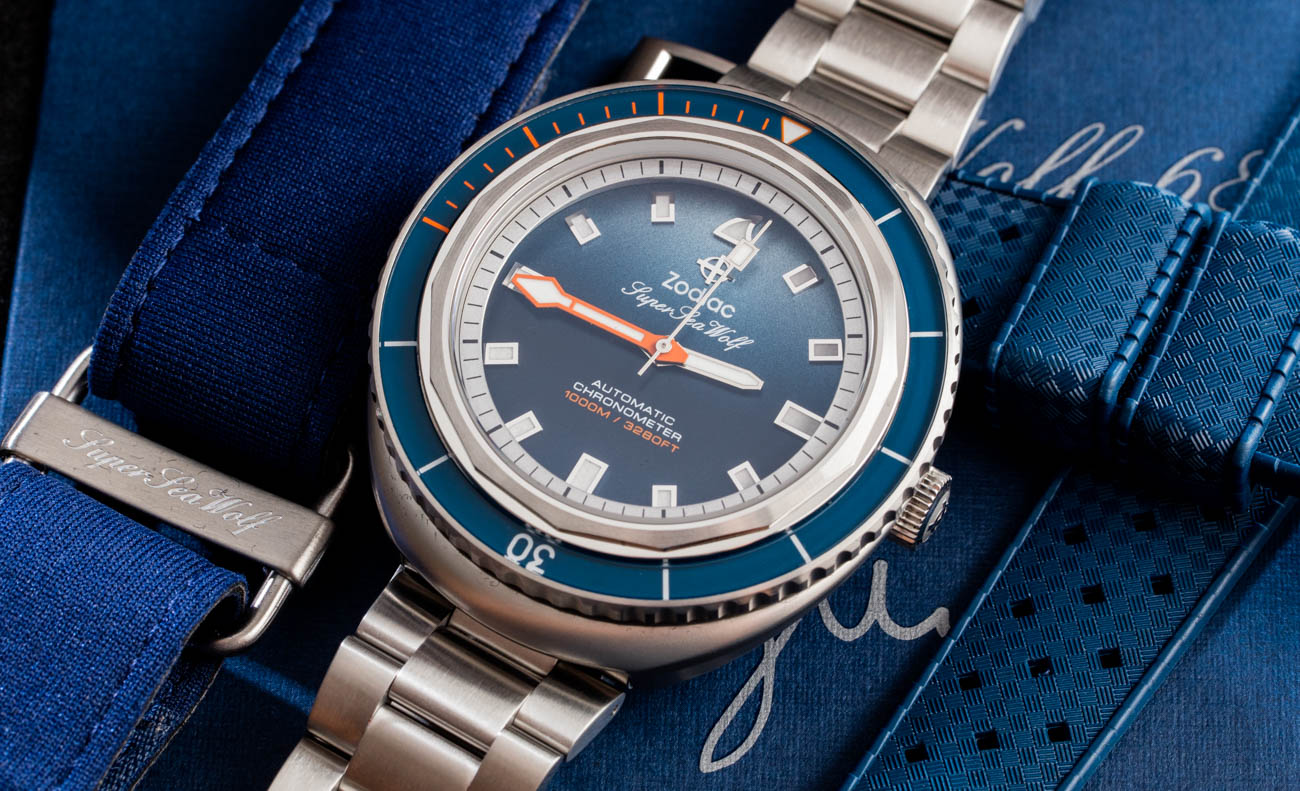 For the last few years, Zodiac watches has enjoyed having National Geographic photographer and acclaimed free-diver Andy Mann as a brand ambassador. Since then, the brand has already released one limited-edition watch in honor of Andy Mann, but this newer limited-edition Zodiac reference ZO9508 is the first watch that features design elements imagined by Andy Mann himself.

This version of the Zodiac Super Sea Wolf 68 Saturation watch seemingly began with a now-popular underwater photograph Andy Mann took of a shark near the Bahamas. A print of that photograph is included in the kit that comes with the watch, along with some some welcome extra straps. In addition to the uniquely colored blue gradient dial, the watch also has a 12 o’clock hour marker that is distinctive to this model and is meant to look like a shark’s dorsal fin. 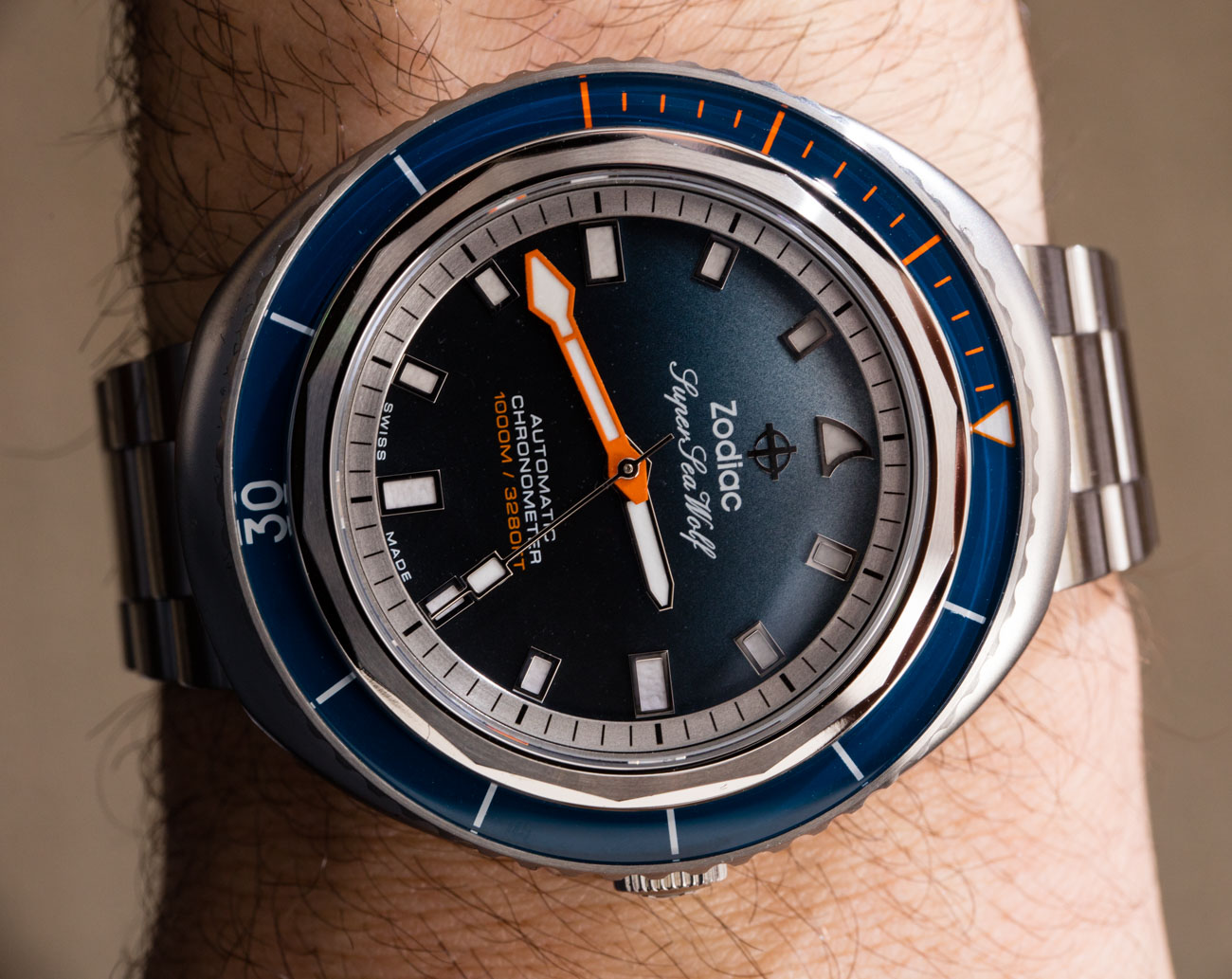 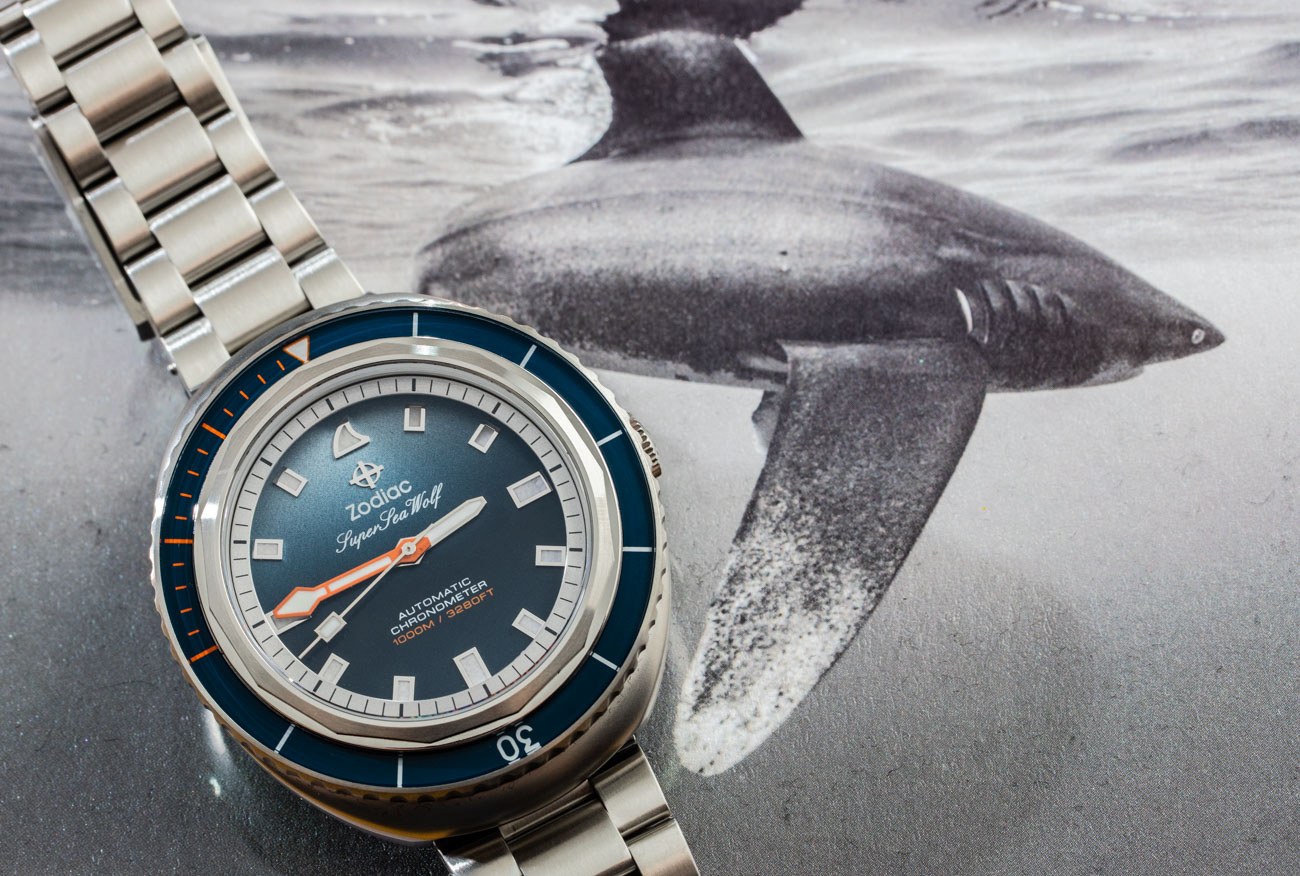 The gradient dial seems to be Zodiac’s answer to the Rolex Deepsea “James Cameron” with the blue and green gradient dial. According to Zodiac, the light to dark blue dial is meant to suggest the way light is filtered out in the water as it penetrates the depths and can also be see in the photograph upon which this watch was inspired. Finally, for this Andy Mann limited-edition Super Sea Wolf 68 Saturation diver, the caseback is decorated with a motif of the shark in the photograph, which is elegant and rather tasteful.

Going back to the dial of the Andy Mann watch, I sort of wish the “direction” of the dorsal fin 12 o’clock hour marker were pointed in the other direction to better go with the theme of the photograph itself. That is a small detail, for sure, but for nerds like us it can mean a great deal. 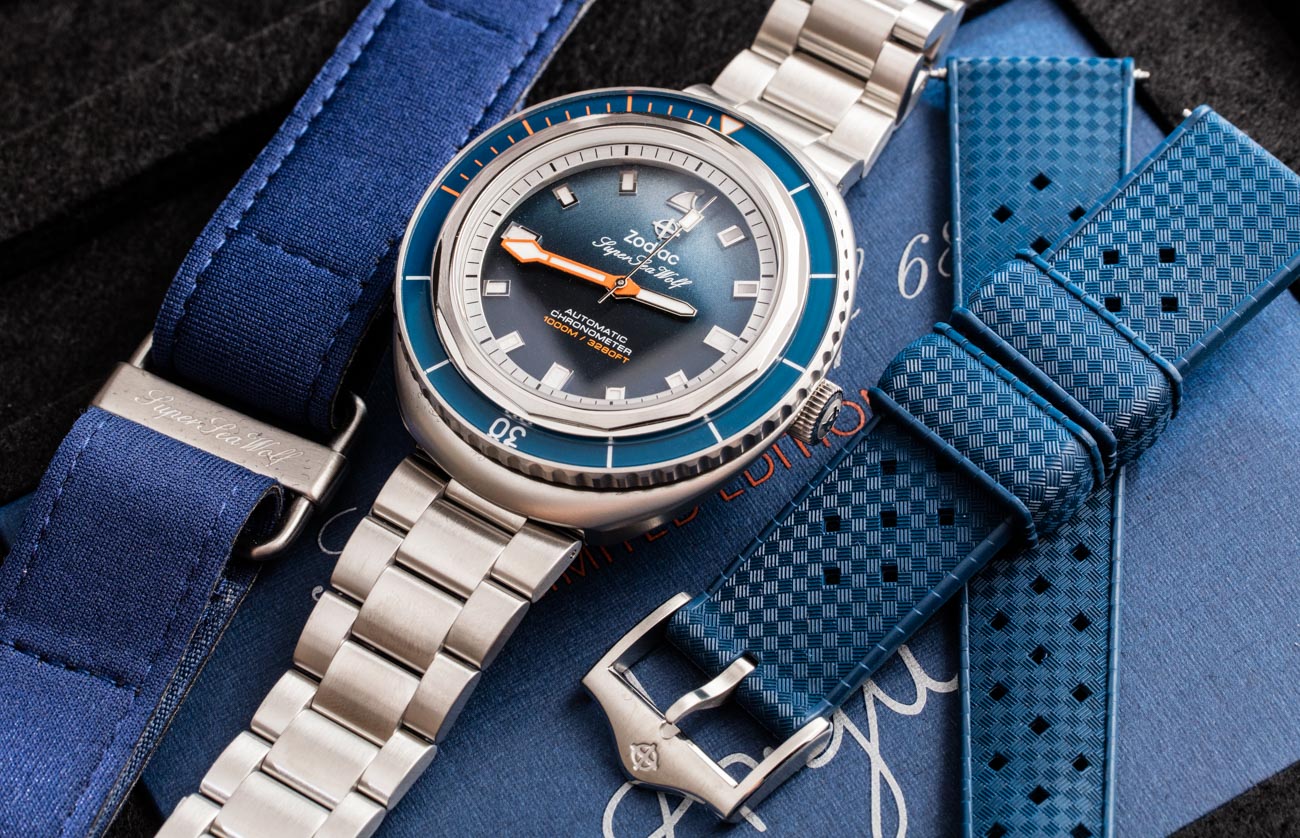 I believe that this reference ZO9508 watch is the first appearance of the new three-link matching steep bracelet that will show up on some other Super Sea Wolf 68 Saturation watches. Prior to this, the Super Sea Wolf 68 collection only came on a strap or a mesh metal-style bracelet. This new three-link bracelet is pretty nice and looks good, despite some of the inherent issues with proportions that you face with the 45mm-wide tonneau-shaped case. The issue is that the lug distance is on the narrower side, so it makes the 20mm-wide strap size look a bit narrow. Zodiac helps this by having the bracelet actually taper a bit, which makes it even more comfortable to wear and look a bit more harmonious with the overall case design. I do prefer the Super Sea Wolf 68 on this bracelet, however — so far, this is my favorite way to wear this watch. 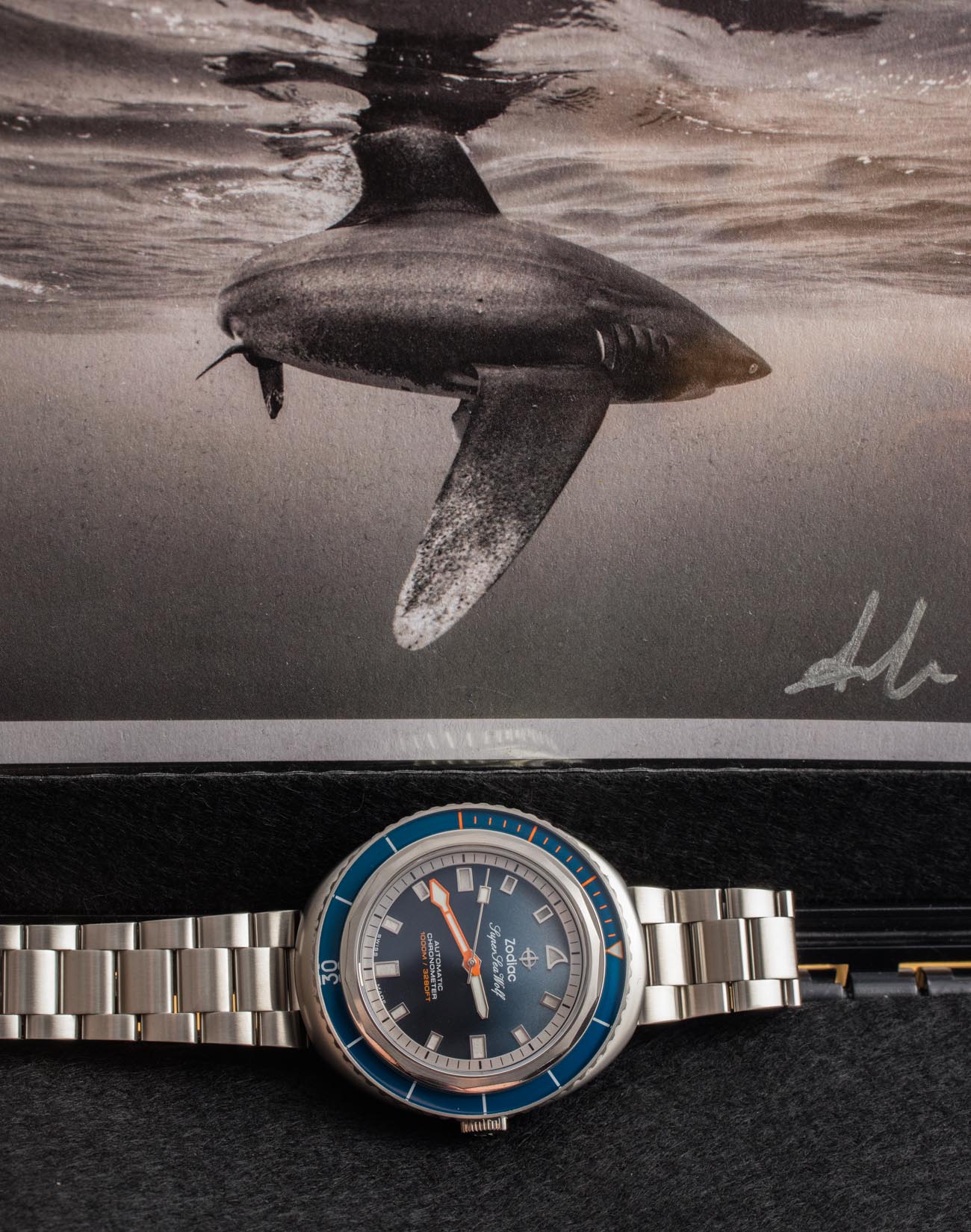 The core Super Sea Wolf 68 Saturation watch is Zodiac’s highest-performing diver’s timepiece with 1000 meters of water resistance and a security (must be pushed down first before turning) uni-directional rotating timing bezel. While it wears high on the wrist, the case is actually just 11mm-thick. Over the dial is a flat AR-coated piece of sapphire crystal; inside the watch is a Swiss-made STP 3-13 automatic movement. For this limited-edition product, Zodiac certifies each of the movements as a Swiss COSC-certified Chronometer. 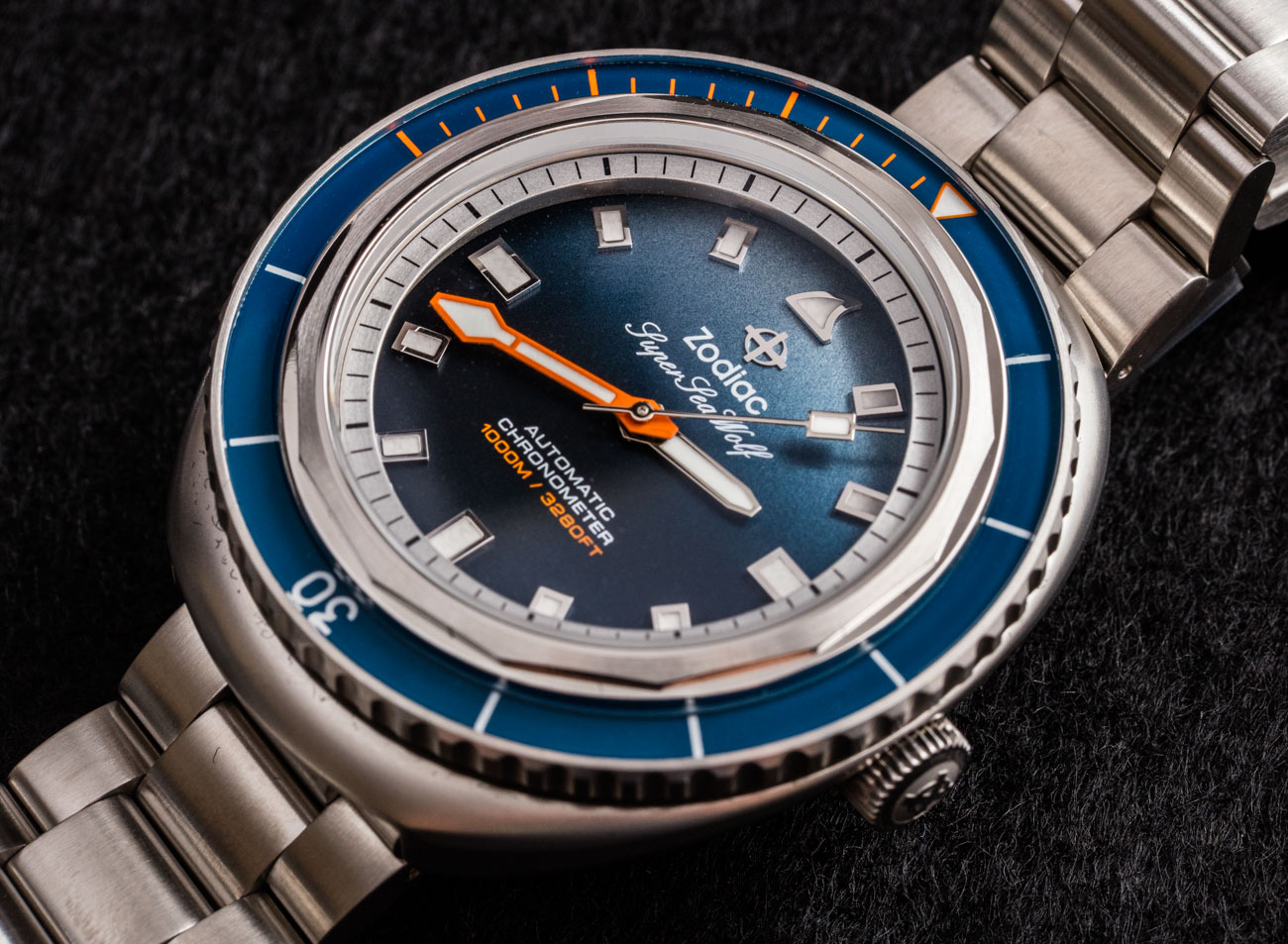 Zodiac prices this and other limited-edition watches at a slight premium compared to non-limited edition models. That said, compared to watches from a lot of other companies, Zodiac products are impressively affordable. Fans of Andy Mann, or those who really like the colors and look of the ZO9508, will be happy to spend the several-hundred-dollar premium on this limited-edition watch to get the fancier package and added straps. Limited to just 182 pieces, the Zodiac Super Sea Wolf 68 Saturation x Andy Mann Limited-Edition watch has a retail price of $2,295 USD. Learn more at the Zodiac website here.