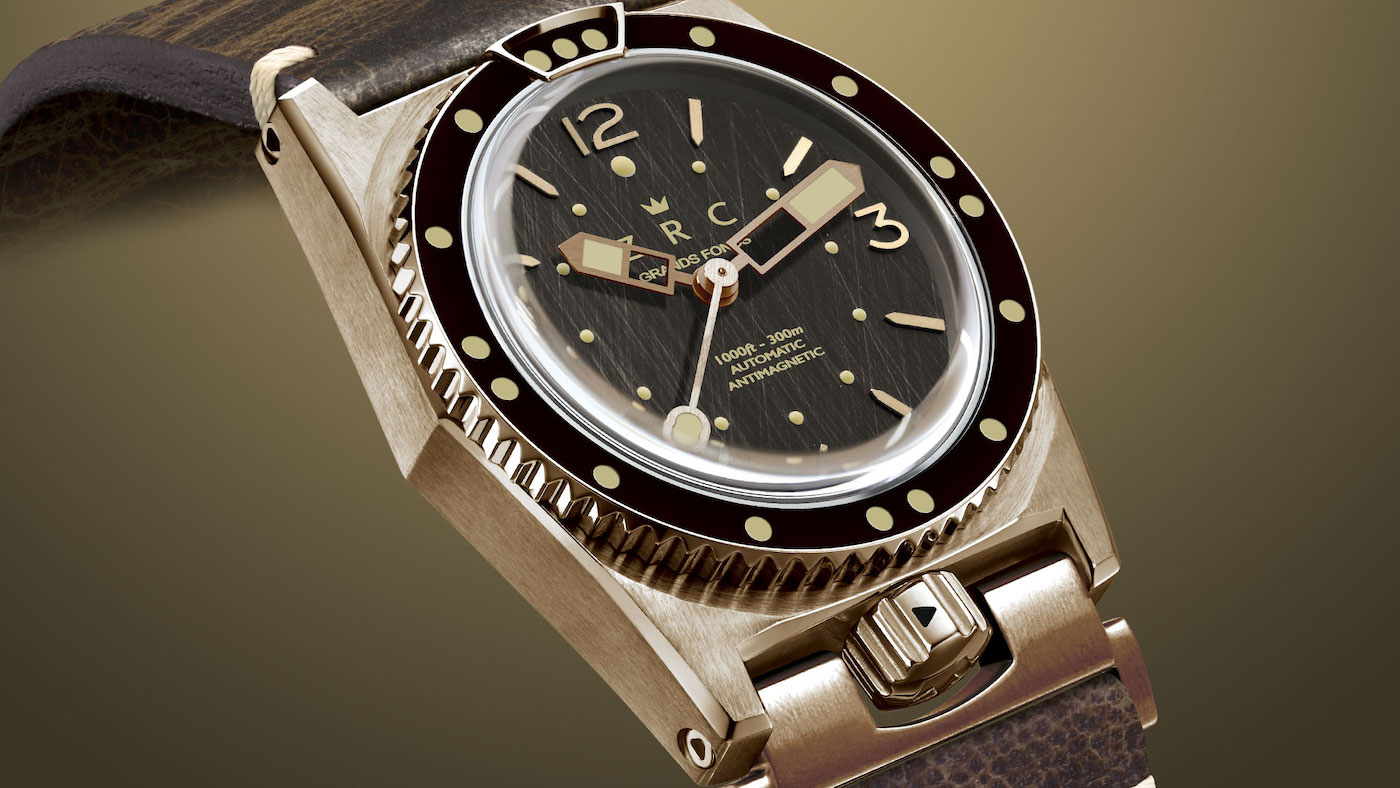 It’s always exciting when the opportunity to review a brand with which I’m not so familiar pops up. It’s especially exciting when the products instantly appeal to me for reasons initially unknown. With the release of the ZRC Grands Fonds Vintage 1964 Spirit Bronze watch, ZRC introduces a material update to its core diver. It is a welcome addition to a range that, while pleasingly concise, keeps things simple when it comes to case variation. 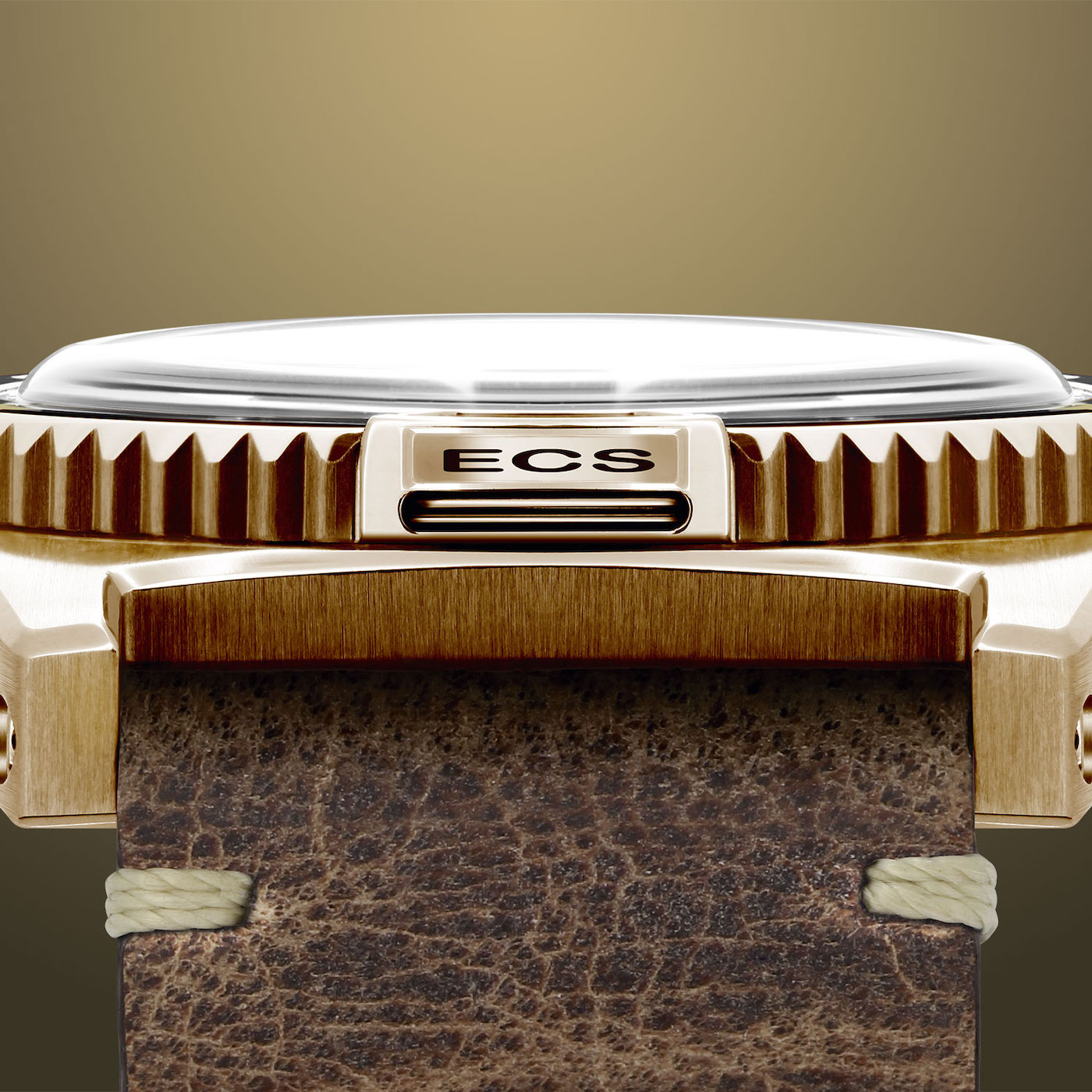 The History of the ZRC GF300

Although a lack of variety could be presented as a drawback, the one solid thing it does do for a brand is provide it with an identity. And the identity of ZRC is, thanks to its unusual case shape, very strong. The angular case middle’s design draws heavily on the silhouette of the brand’s most famous model, the ZRC Grands Fonds 300m, launched originally in 1960. Founded in 1904 in Geneva, ZRC enjoyed moderate success in the early part of the 20th century, eventually being selected as the official timepiece for the French Navy from 1964-1982.

It was during this period that the ZRC Grands Fonds 300m made a name for itself and etched its story indelibly into the brand’s history books. Its popularity meant it was always ripe for an update and, in 2015, that’s exactly what we got. Fast forward to the modern day and ZRC have decided to create a version of that update in bronze, to tap in to the current trend (that seems to be bedding in for the long haul). This 40.5mm reimagining of that classic form is water resistant to 300 meters and perfectly legible in darkness, thanks to the Super-LumiNova applied to the indices, Arabic numerals, hour dots on the dial, hour dots on the bezel, and the hour, minute, and seconds hands. The vintage glass box sapphire crystal covers an unusual, striated dial. 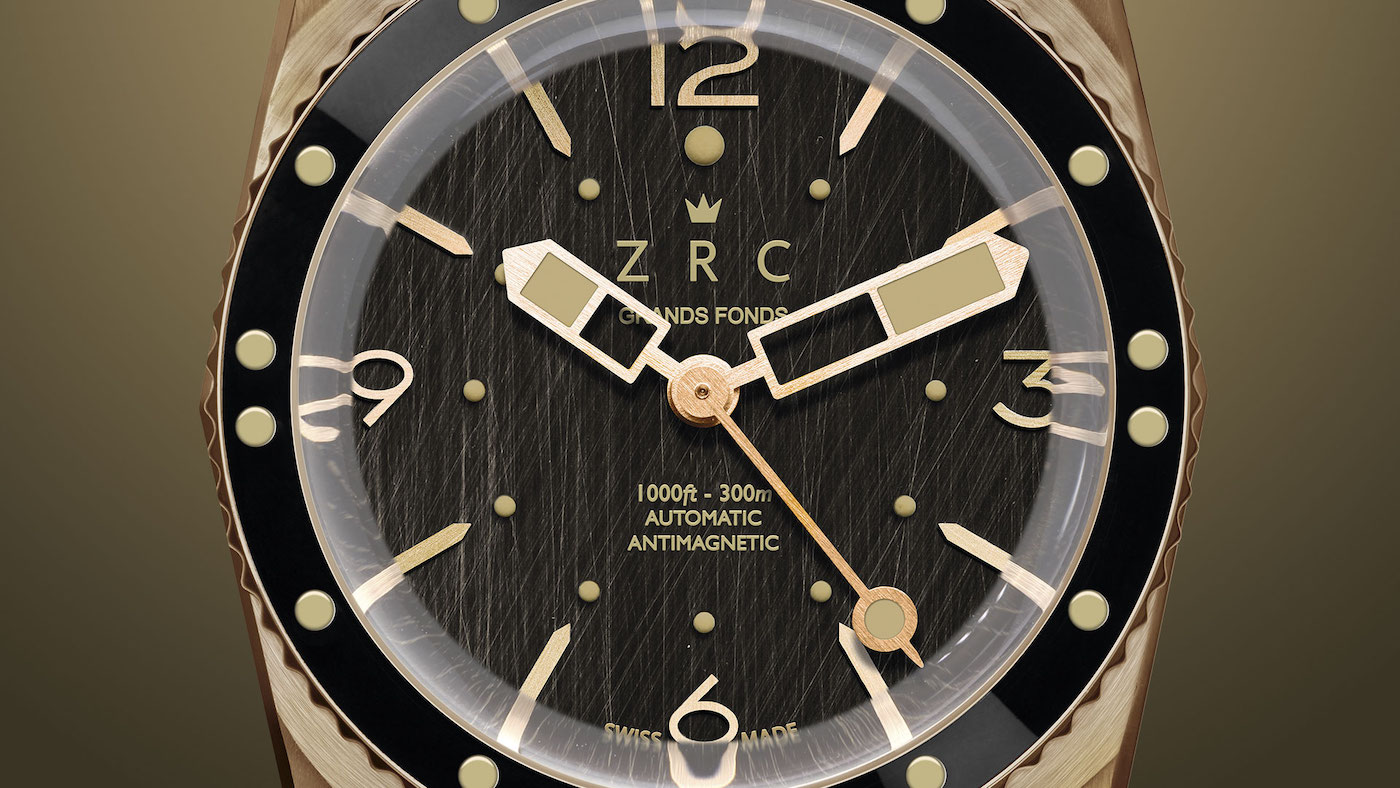 The bezel itself deserves mention. The dot-only design is quite uncommon. By forsaking the more subliminally interpretable Arabic numerals in favor of this charmingly symmetrical design, ZRC may have sacrificed a little bit of legibility when it comes to the immediate interpretation of elapsed time, but the result is so nice (and neat) in daylight, I would be inclined to forgive the whimsy. Furthermore, the little rider tab decorated with three luminous dots at 12 o’clock actually houses a feature ZRC refers to as “ECS'”(Easy Clean System). One problem reported by the French divers who frequently wore these watches in salt water was that the crystallized salt could jam up the bezel. The ECS allows freshwater to be run through the click mechanism to free up any particulate that may have become lodged between the bezel and the case.

By locating the crown at 6 o’clock, the symmetry of the race is maintained. The extra end link needed to attach the strap to the case is not as visually jarring as I would have expected. It also makes it impossible for the watch to be strapped on the wrist before the crown is screwed down, ensuring water resistance. 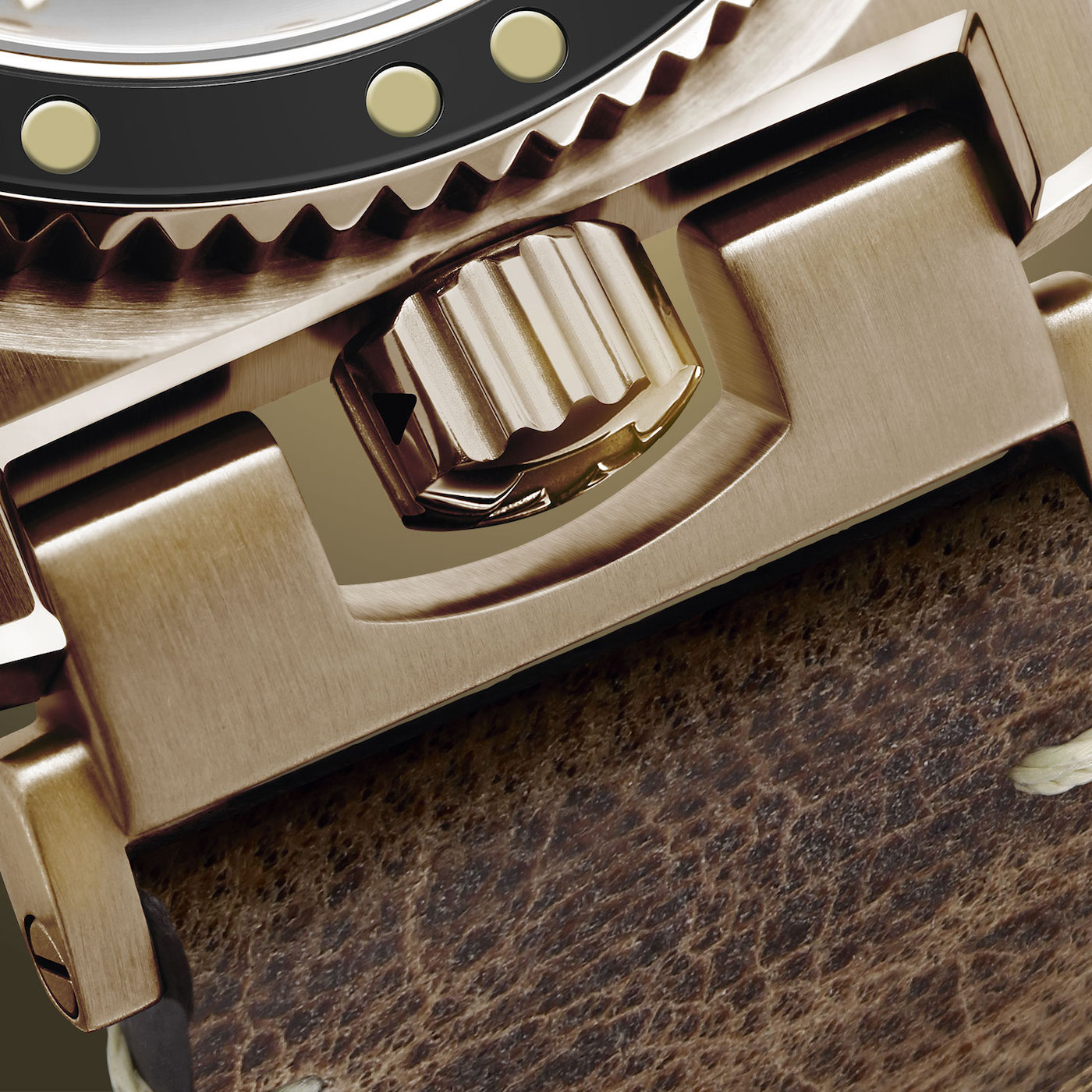 Perhaps my favorite design decision made with the ZRC Grands Fonds Vintage 1964 Spirit Bronze watch was to fit the strap with a bronze buckle. Too often, bronze buckles are dropped in favor of steel alternatives due to the heavy oxidization one might expect a buckle to incur due to it being worn so close to the underside of the wrist. This total commitment to design congruity is appreciated. It would be very interesting to see if ZRC ever countenance the creation of a bronze bracelet in the same style as their version in stainless steel. The ZRC bracelets feature a special, expanding end-link that offers a creative solution to fitting the watch over a dive suit. It’s a huge part of the 1964’s character and would be super cool to see it in bronze. 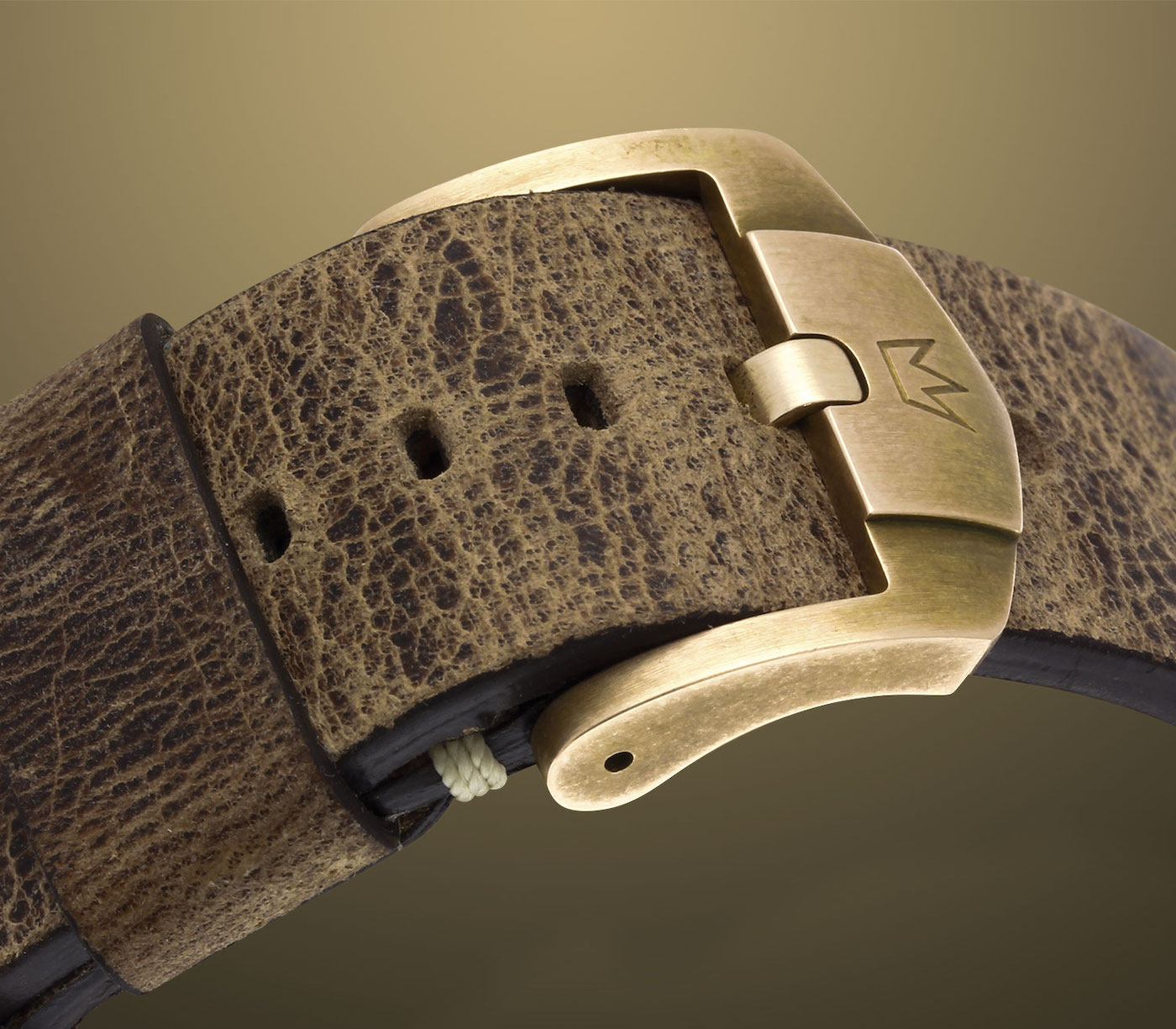 To say I am impressed by this watch would be an understatement. The offering from the brand is extremely limited, with just a handful of models available, but the aesthetics are so eye-catching and full of character, I think the owners have been wise (and refreshingly restrained) in not blowing up the core concept. The movement — an ETA 2824-2 Elaboré — is a standard but appropriate choice for a model of this nature. With a 28,800vph operating speed, self-winding rotor weight, and a power reserve of 38 hours, this industry tractor movement is an ideal choice for a robust daily diver. This particular piece is a limited edition, and will only be made 170 times. Price for the ZRC Grands Fonds Vintage 1964 Spirit Bronze is USD $3,390. Find out more at zrc1904.ch.