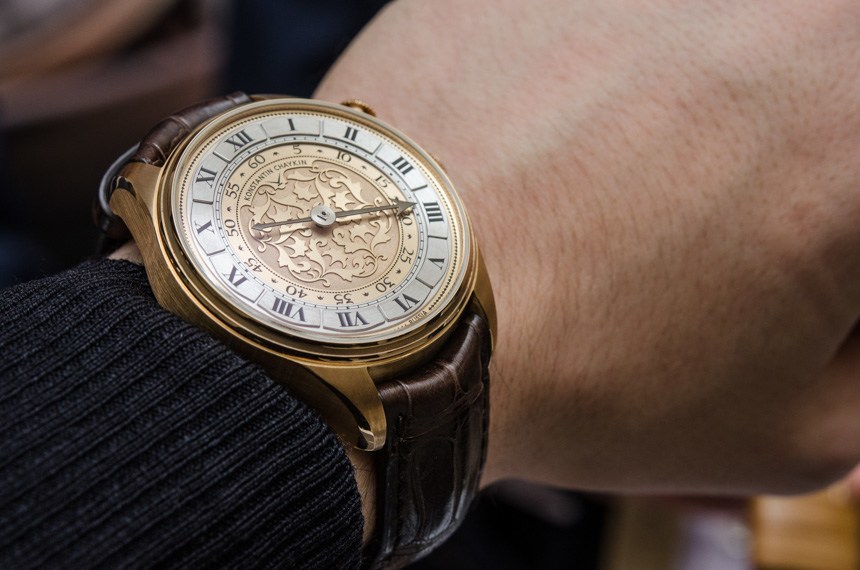 This is Russian watchmaker Konstantin Chaykin’s latest timepiece, and they call it the Genius Temporis, which roughly translates from Latin to “the spirit of our time.” That, however, doesn’t particularly explain the functionality of this 16th century-style timepiece. What you have is the simple elegance of a single-handed watch with the ability to also know the minutes (on demand) when the wearer chooses. Inside the watch is a movement that has been completely produced in-house in Moscow at the Konstantin Chaykin manufacture. It is the new K01-5 manually wound movement that has 48 hours of power reserve and is produced from materials in brass, bronze, and also gold. The unique complication in the movement temporarily switches the hands on the dial from indicating the hours to the minutes upon pressing the pusher located at 2 o’clock.

The idea is for the Konstantin Chaykin Genius Temporis to offer the wearer the ability to enjoy the pleasure of wearing a single-handed watch, but to also offer the practicality of knowing the time down to the precise minute when needed. Having seen it in operation, I can tell that the minutes are only indicated when the pusher is depressed, and when the wearer removes their finger, the hand snaps back to indicating the hour. The concept is clever, and also novel, as far as I know. It is certainly the type of thing that I would expect from the innovative mind of Mr. Chaykin. From a design perspective, the dial of the Konstantin Chaykin Genius Temporis echos the look of early timepieces. The engraved brass dial is plated and has a Roman numeral hour marker track meant to evoke the look of early enamel dials. We should note that the watch pictured here is a prototype and slight changes may be made in design and of course in quality of execution for the benefit of the final product. Other watches that share a similar design aesthetic are those from the Swiss watch maker Julien Coudray. Even the way the single hand is applied to the dial mimics the style of early timepieces. On the wrist, the Konstantin Chaykin Genius Temporis is 44mm wide and offered in 18k rose gold. Attached to the case is a black alligator strap, and the overall design is quite interesting, even among otherwise “classically-inspired” timepieces. Just the design alone would make it noteworthy, but the inclusion of the clever complication that offers a single-handed watch with an optional indication of the minutes makes it that much more special. In other words, this is exactly what Konstantin Chaykin has raised his fans to expect. The Konstantin Chaykin Genius Temporis watch was debuted at the 2014 SalonQP show in London, held between the 6th and 8th of November. Price is 25,000 Euros. konstantin -chaykin.ru