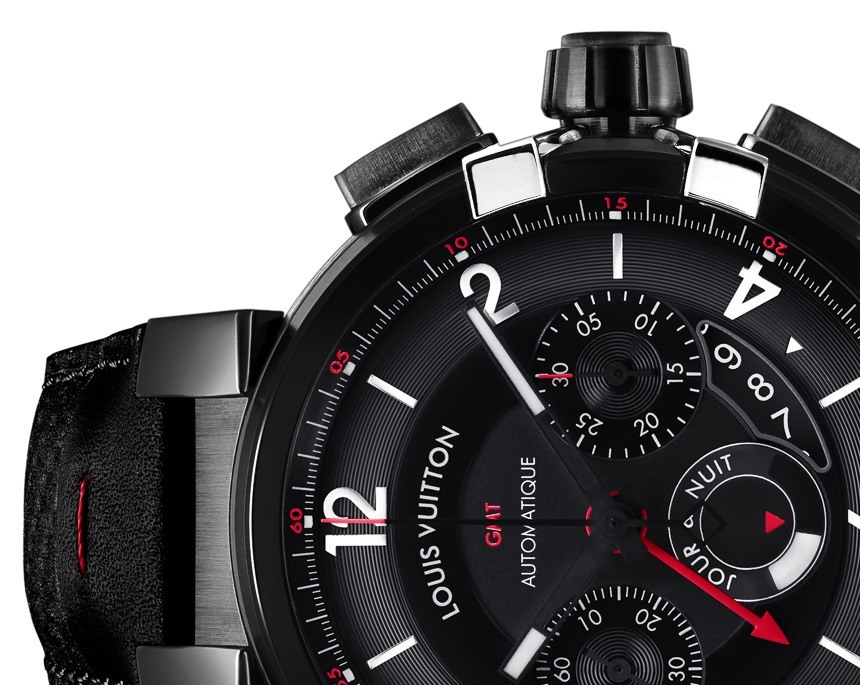 For Baselworld 2015, Louis Vuitton watches embrace black with a new collection of three Louis Vuitton Tambour éVolution timepieces in black – each of them sporting a second time zone in quasi-GMT format. These are pretty interesting models and add an interesting look to the larger Louis Vuitton watch collection, which the company has been attempting to bolster as a more serious horological product for the last few years. Part of that has been investing in their own movement manufacture, “Louis Vuitton La Fabrique du Temps,” as well as focusing on some more experiment complications. We see one of those here, in this new version of the Louis Vuitton Tambour éVolution Spin Time GMT in Black watch.

Louis Vuitton is part of the larger LVMH (Louis Vuitton Moet Hennessy) group which also owns major watch makers such as Zenith, Hublot, TAG Heuer, and Bulgari. It isn’t as though LVMH really needs more watches, but a brand as powerful as Louis Vuitton doesn’t do too poorly with whatever it decides to offer, and its watches are certainly among its more exclusive offerings. So let’s take a look at these new DLC-coated black steel Louis Vuitton Tambour éVolution GMT watches for 2015 and who they might be good for. There is a distinct line in the sand separating people who consider themselves to be serious watch lovers. Some watch people will wear a timepiece from a “fashion brand” and some simply will not. With the Louis Vuitton name on the dial, there are a lot of people who will simply have no interest in these watches – and for them, LVMH has other things to offer. Those that will wear a “fashion brand” watch are perhaps more open-minded but demand a lot. There must be a fluid integration behind the design, value, movement quality, and overall presentation.

I’ve long since admired some of the legacy Louis Vuitton Tambour collection watches – namely the Tambour Divers. Yes, the watches are extremely expensive, but I enjoyed them for their unique design and character. That they had the Louis Vuitton name on them meant absolutely zero to me. So what type of watch lover am I? I would say that I am more open minded, but that is only because I am totally brand agnostic. I look at the brand name on a dial long after I’ve inspected many other elements about a watch. As long as the brand’s personality doesn’t offend me, I wouldn’t mind wearing a Louis Vuitton or other fashion brand watch, assuming it had the right stuff otherwise. It was back in 2013 that Louis Vuitton initially introduced the Tambour éVolution collection which simply added some styling cues and more intricate details as well as a more traditionally round case to the “dog bowl” case design of the original Tambour. I’ve actually never seen a Tambour case in black, so that was my immediate interest in these new Louis Vuitton Tambour éVolution GMT in Black models. Note that prior to the DLC-coating application, the steel cases were brushed and polished in different areas – which is visible through the coating. With their unique lug structure, the Tambour éVolution watches wear distinctively, but also comfortably. You sort of love or hate them.

The first of the new Tambour éVolution timepieces is the Louis Vuitton Tambour éVolution GMT in Black, which is 43mm wide and water resistant to 100 meters (well, they are all water resistant to 100 meters). With the cleanest dial of the bunch, this timepiece contains the automatic caliber LV71 (not in-house made) movement (operating at 4Hz with 42 hours of power reserve) which has two time zones with a day/night indicator for the second time zone and the date. I don’t consider this a true GMT, because it (like the other models here) doesn’t indicate one of the time zones in 24-hour format, but rather uses a second 12-hour hand. This is similar, but just makes for a “two-time-zone watch.” Basically, you have two hour hands, with each representing a different time zone. As a basic travel watch, the Louis Vuitton Tambour éVolution GMT in Black is modernly cooly with a welcome black with red accent color tone. With this collection, the Tambour éVolution very much feels like Louis Vuitton’s version of the Montblanc Timewalker (which is most certainly less expensive). Louis Vuitton also decided to add a new version of its pretty awesome Tambour Spin Time watch (first covered here) to the Tambour éVolution in Black collection. The Louis Vuitton Spin Time was first introduced in 2010, and that first version is still my favorite. The 2015 Louis Vuitton Tambour éVolution Spin Time GMT in Black is different from the original model in some ways, but it does retain the core concept – which is to display the time in a second time zone via small cubes on the dial that turn around when it is that hour. The new Spin Time dial has been highly minimalized, and the in-house made calibre LV111 automatic movement produced by Louis Vuitton is different from that in the original Spin Time. What is different is that now the second time zone cubes are adjusted using the crown, whereas in previous Spin Time models, there were pushers on the left of the case to advance the second time zone forward or backward.