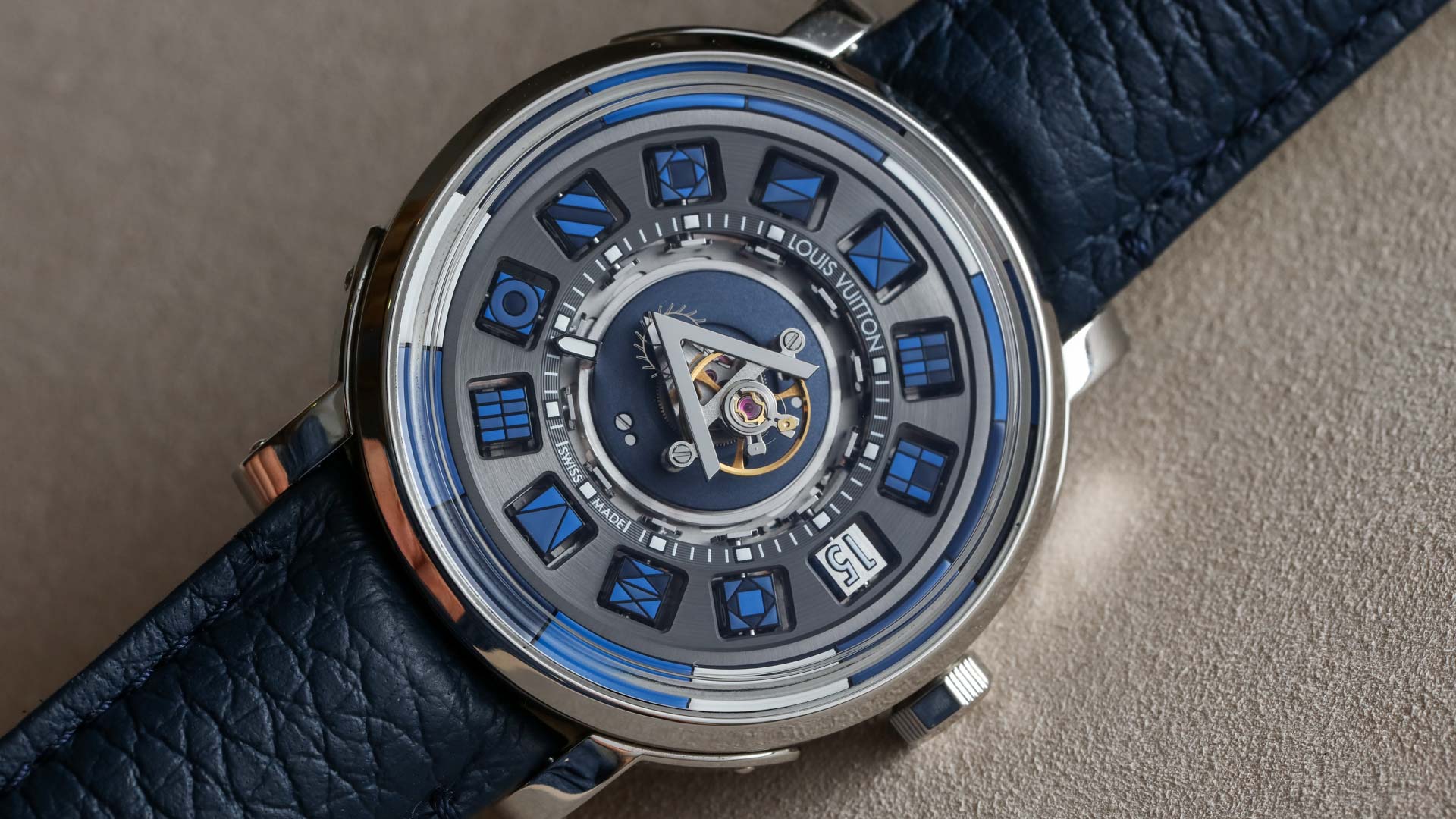 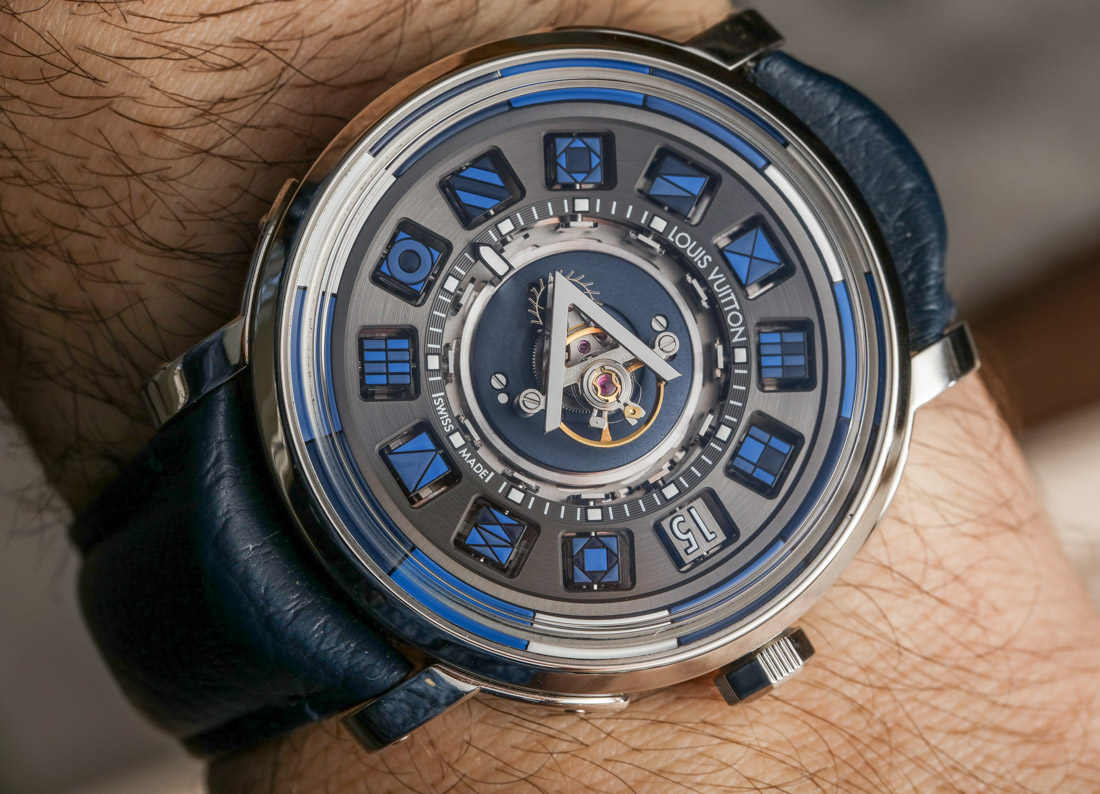 The Louis Vuitton Escale Spin Time Tourbillon Central Blue watch is a new-for-2018 product that as of writing isn’t even on the Louis Vuitton website. It is common that the brand’s most exclusive timepieces aren’t listed widely or at all on their website. I can’t say why that is, but for the time being, it certainly adds a serious perceived level of exclusivity to these products. This particular Louis Vuitton watch combines three important features that the brand is proud of. First is its dress-style Escale case, which here is 41mm wide and in 950 platinum and titanium. Second is the brand’s proprietary “Spin Time” complication, and third is the central in-house made tourbillon.

The Escale Spin Time Tourbillon Central Blue certainly isn’t a watch for the average Louis Vuitton customer with its close to $150,000 price point. Aside from some very exclusive pieces of luggage, the brand’s timepieces represent among the most expensive items available in their catalog. Fine watches, in general, make for a very appropriate halo product for fashion brands who want people to take their in-house craftsmanship and manufacturing capabilities as seriously as possible. 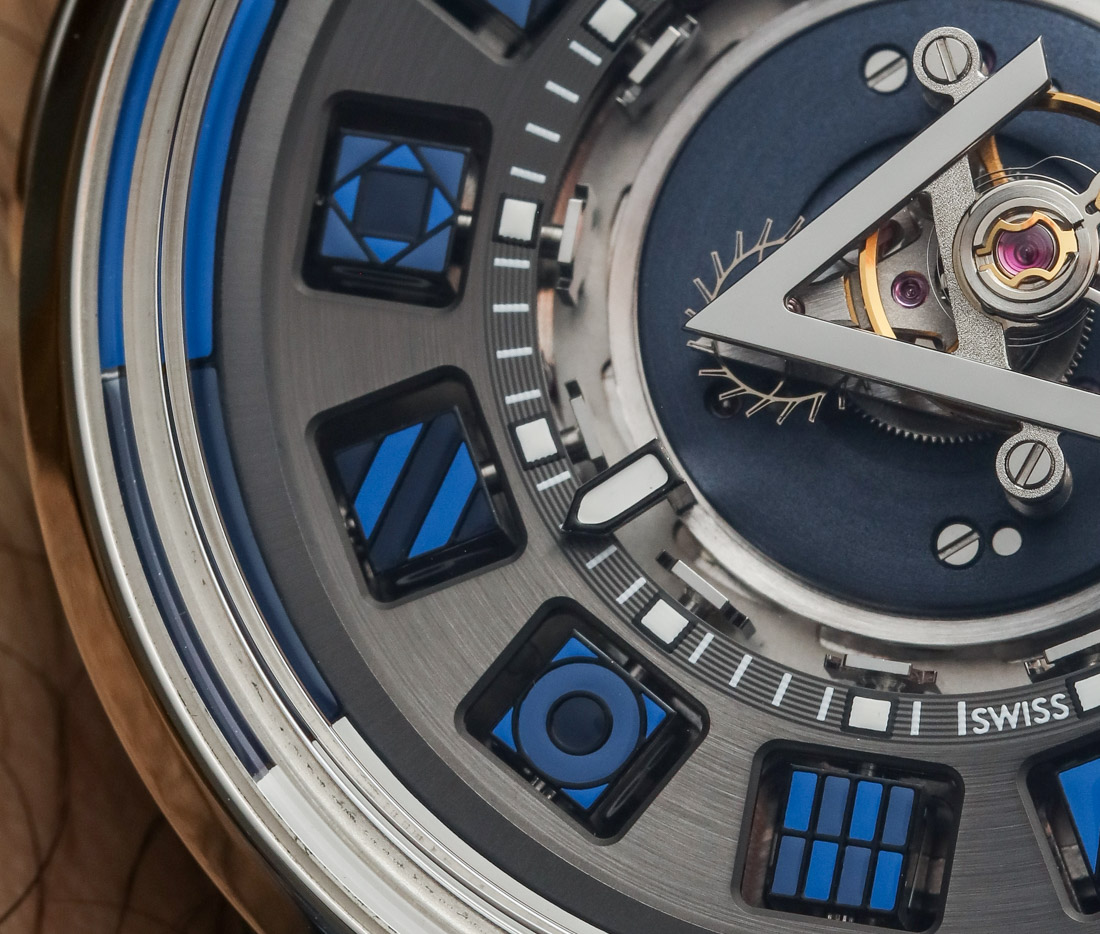 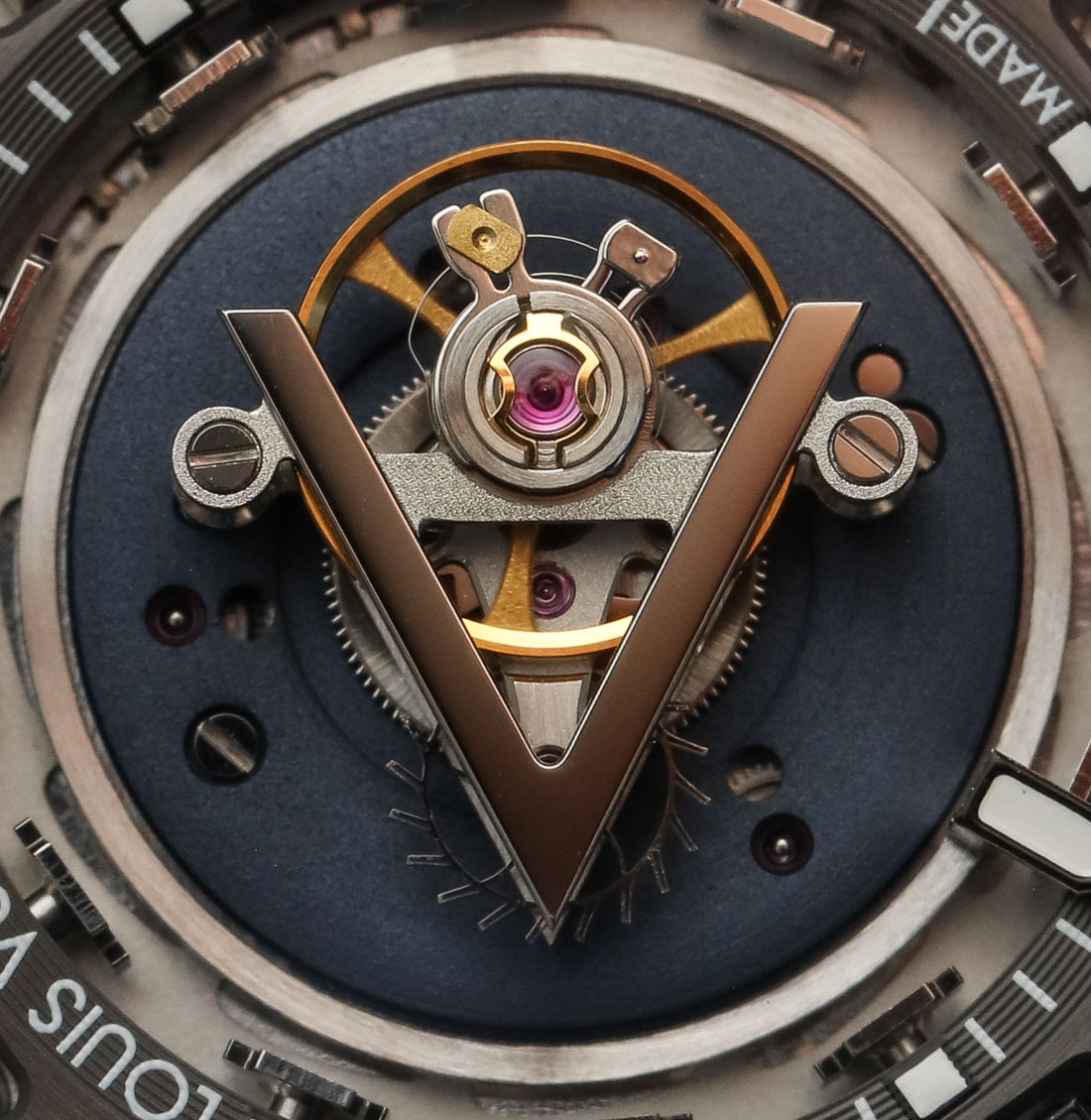 Where does this leave watch collectors? A lot of times watch collectors look upon pricey luxury timepieces from “fashion houses” with skepticism. “Are these actually well made? Are these actually mechanically competent? How much of the price is just a brand tax?” These are all important questions whose answers greatly depend on the brand and product. In the context of Louis Vuitton, the simple answer is that the larger LVMH group is very seriously into watches given its ownership of Hublot, TAG Heuer, Zenith, Bulgari, and more. On top of that, Louis Vuitton itself has its own watchmaking facility known as La Fabrique du Temps Louis Vuitton. It is there that the Escale Spin Time Tourbillon Central blue is produced.

Centrally-mounted tourbillons are no longer as rare as they once were – though they are still uncommon and very cool. The idea is that the spinning tourbillon is mounted in the absolute center of the dial, as opposed to a position such as right over 6 o’clock. Omega was the first brand that helped popularize the central tourbillon – and they still produce a few of those on a limited basis. Centrally-mounted tourbillons are tricky because you can’t exactly mount hands over them. So watches with central tourbillons all need alternatives to the traditional centrally-mounted hour and minute hands. Here the solution is interesting and fun – and this is where the Spin Time complication comes in. 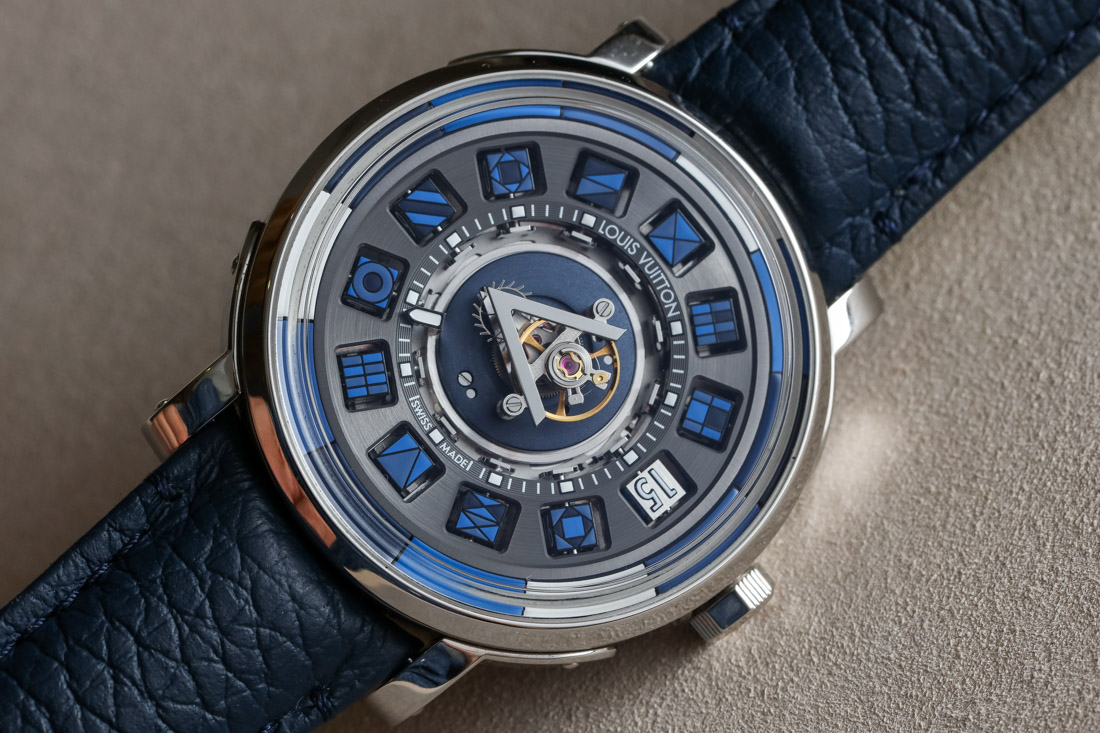 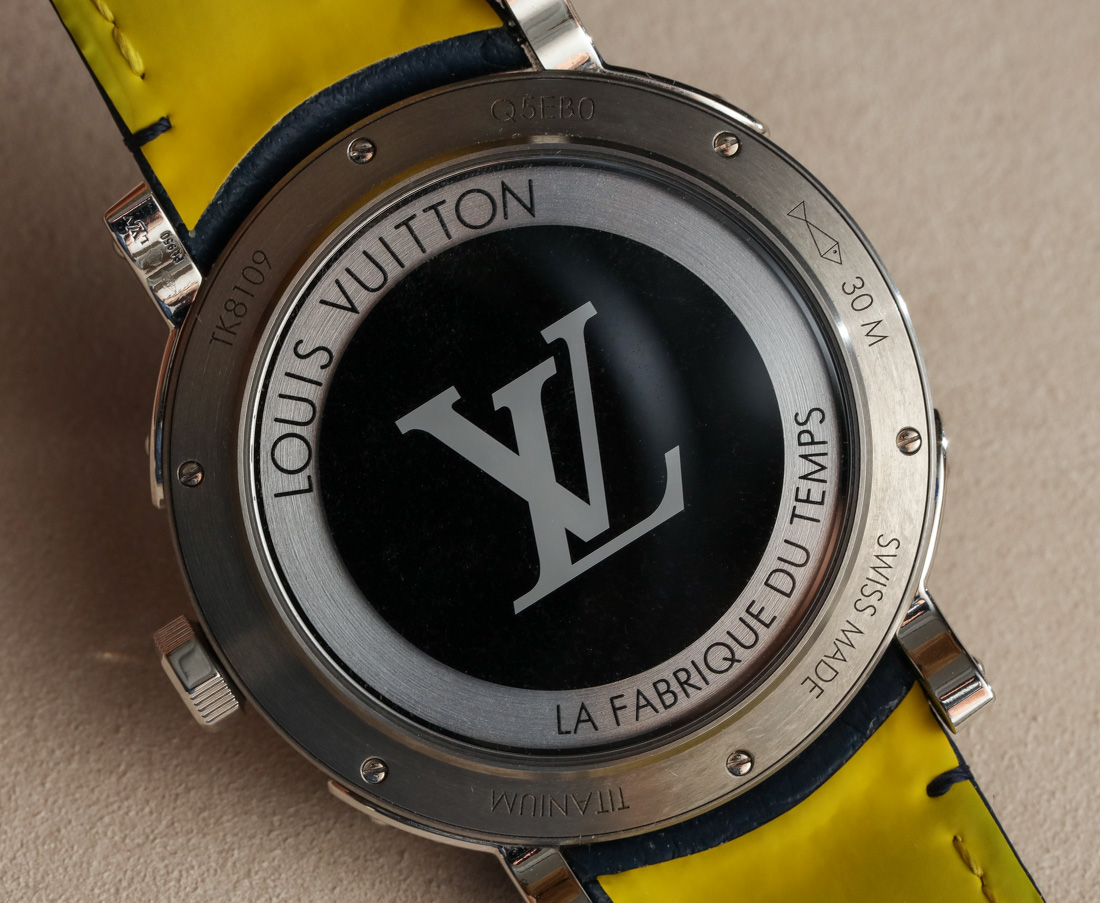 Note that “Spin Time” actually represents a few different types of complications Louis Vuitton has used over the years. What each has in common is the use of twelve cubes which spin in order to indicate information such as the current hour. As such, on the dial of the Escale Spin Time Tourbillon Central are twelve painted cubes that spin to reveal the current hour when it is their turn. The cubes are colored blue using a form of hand-operated pad printing, which carefully transfers segments of color onto the small surfaces one small piece at a time. A smaller hand to indicate the minutes projects from the periphery of the tourbillon assembly, whose mounting is actually under/around the tourbillon system.

Another note on the hour hands is that they indicate the time in 24-hour format. That means the first time around the dial, the hours indicate 1-12. The second time around they indicate hours 13-24. This makes the watch a bit quirkier, but at the end of the day, I think it is more interesting. Though the appeal will be for places which are more familiar using the 24-hour format – which doesn’t include the United States where most consumers prefer a 12-hour format. 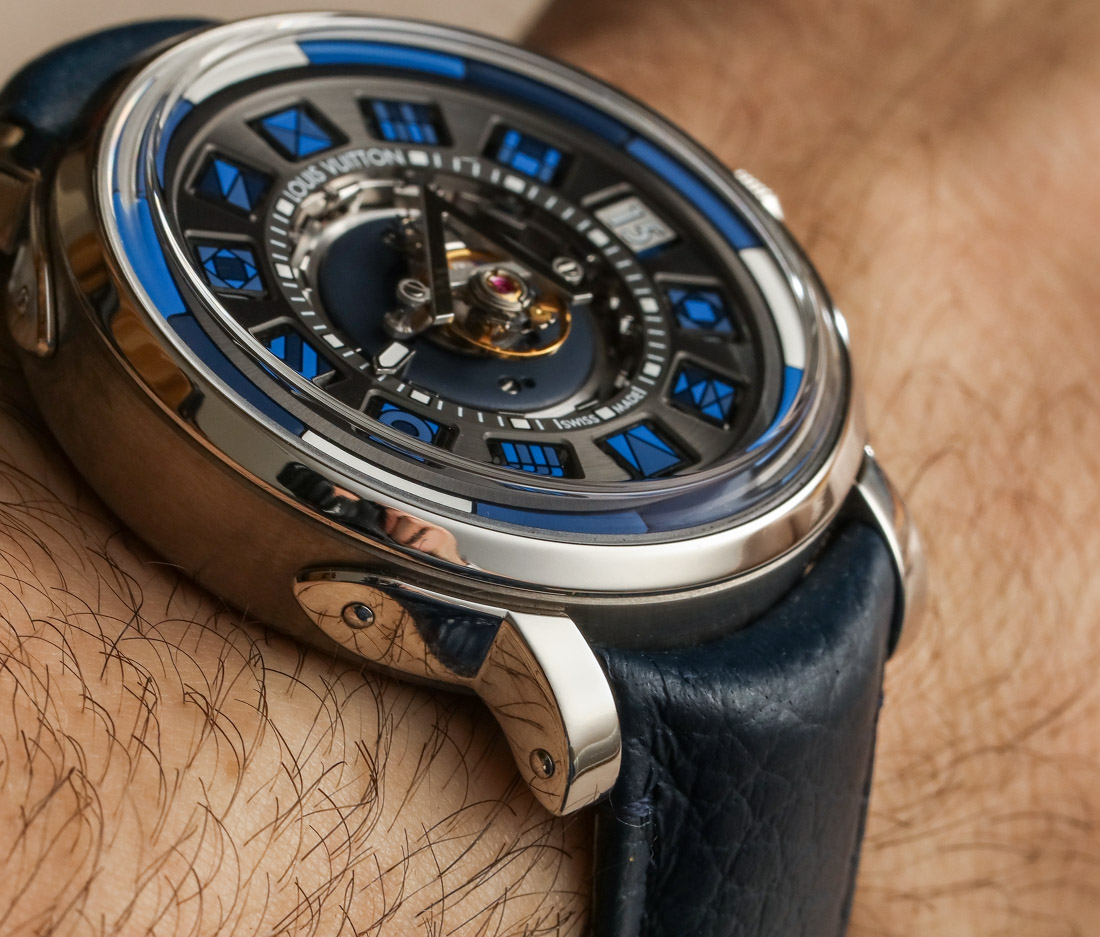 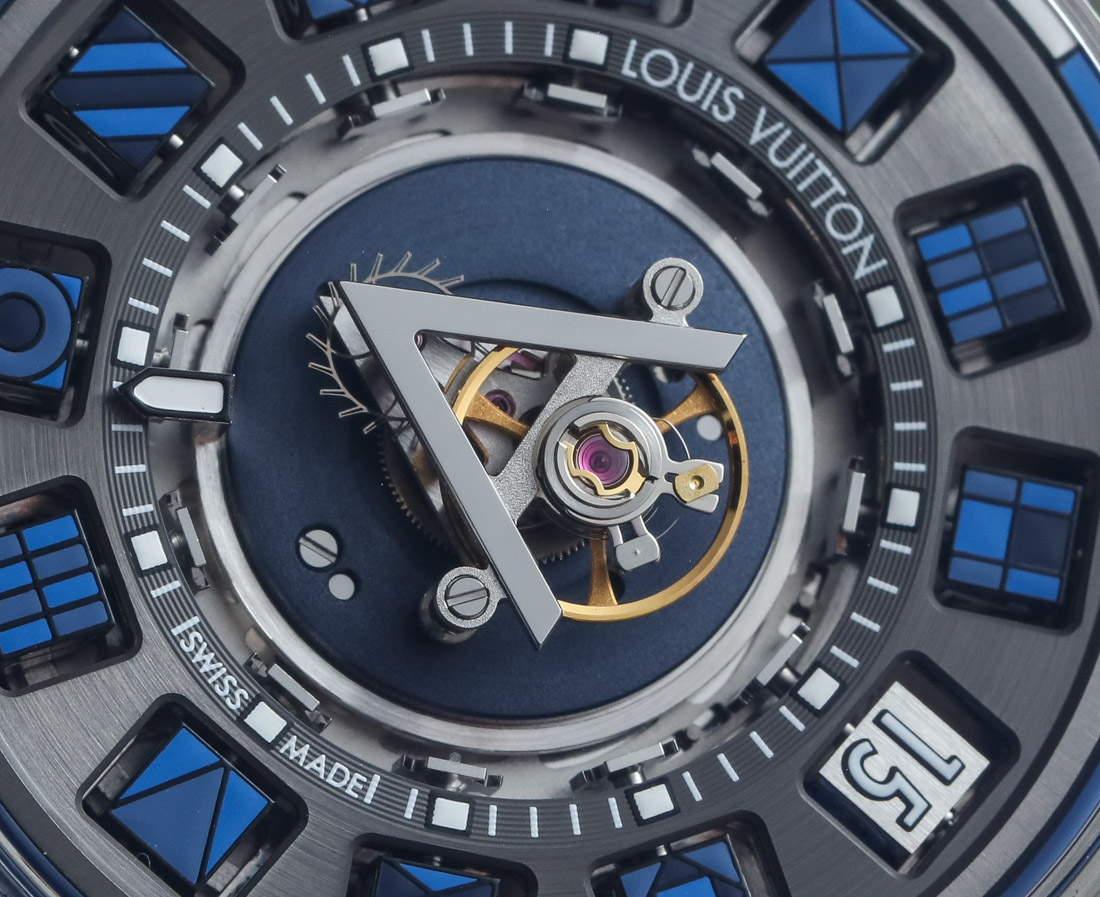 In true brand fashion, the tourbillon cage is shaped to look like a “V” for “Vuitton.” It is set against a lovely matte blue surface and the flying tourbillon visual experience is really handsome and attractive, in my opinion. The movement is known as the Louis Vuitton LV 92, and it is an automatic with a sort of hidden automatic rotor whose motion can be viewed on the rear of the watch. You can see more about how this rotor looks and more about the Escale-style case in my aBlogtoWatch review of the Louis Vuitton Escale Time Zone 39 watch here. The LV 92 automatic movement operates at 4Hz (28,800 bph) with 40 hours of power reserve. I believe it is a base movement with a module on top for the Spin Time and flying tourbillon systems.

In general, I like the Escale case a lot. It is dressier than the brand’s Tambour cases, and the lug structure design is inspired by Louis Vuitton trunk luggage from the past. Again, this model has a 41mm wide case that is actually not too thick at 12.8mm. It’s water-resistant to 30m, of course, has a double sapphire crystal on the front and back, and is produced from titanium and 950 platinum parts. What an interesting combo that we don’t see every day. The middle case is brushed titanium, while the lugs, crown, and bezel are in 950 platinum. Attached to the case is a blue-colored alligator strap with a cool yellow rubber lining that promotes comfort and the overall life of the strap. 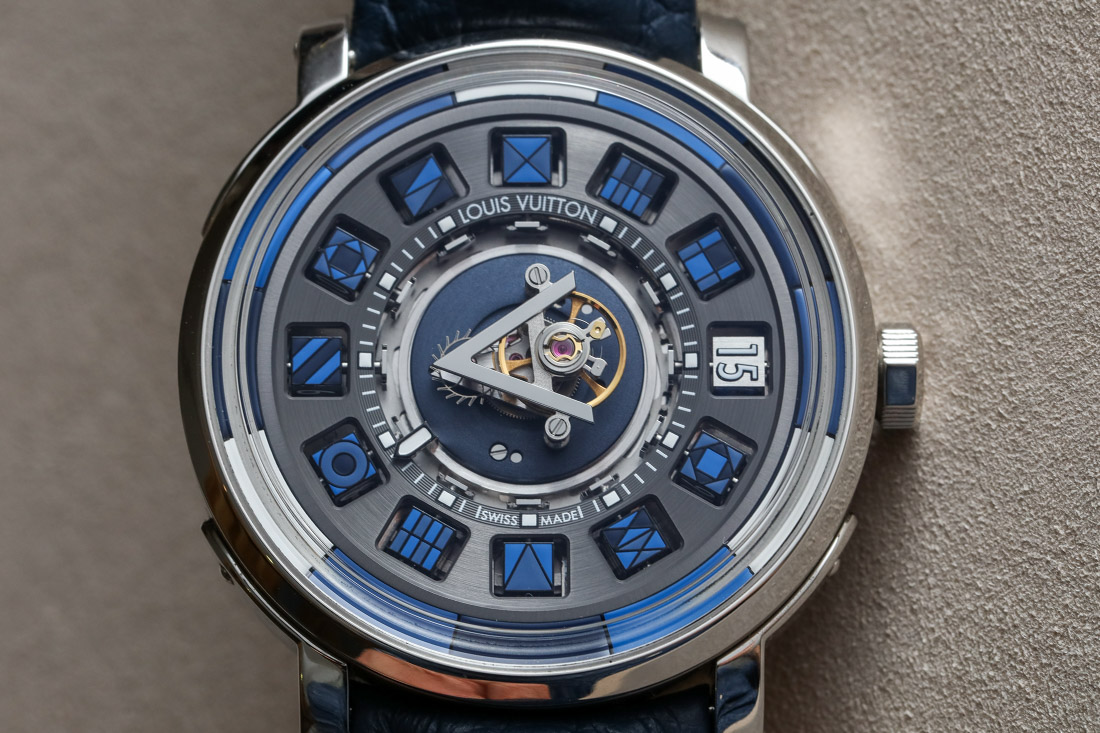 Who is the Louis Vuitton Escale Spin Time Tourbillon best for? This complication is interesting enough to be in any number of “traditional” watch brand high-horology pieces that aren’t associated with a fashion brand. Nothing about this watch is kitschy or boring, but there are going to be some people who feel it is “overly fashionable” for a traditional timepiece. They might be right but Louis Vuitton isn’t going for the Patek Philippe crowd. A watch like this is best suited for timepiece collectors with the budget and playfulness to appreciate a real watch lover’s Louis Vuitton. This is by no means the most expensive Louis Vuitton watch ever made, but at over $100,000 it certainly is up there with the brand’s most exclusive products. In the long term, I believe products like this will “age well” given what is likely to be the enduring value and consumer interest in the Louis Vuitton brand. Assuming Louis Vuitton continues to earn a place as a top mark, its top products will benefit with enduring appeal. Price for the Louis Vuitton Escale Spin Time Tourbillon Central Blue watch is $144,000 USD. Learn more at Louis Vuitton here.