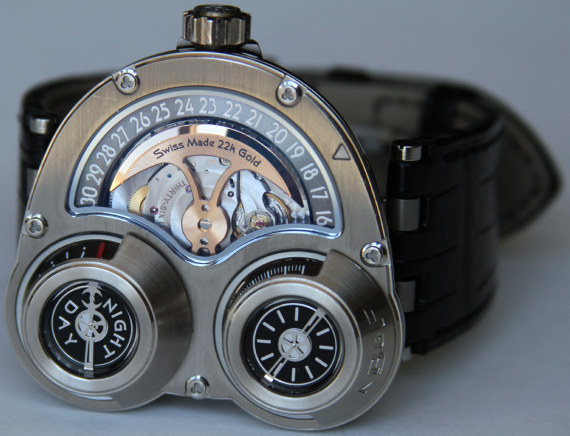 MB&F wanted me to wear an Horological Machine # 3 watch to the Pebble Beach Concours de Elegance 2010, which I wrote about here. How could I keep from writing a full on review for aBlogtoRead? To many people the ability to tote around an MB&F is a dream. It represents the pinnacle in indulging a luxury lover’s gadget fetish – to wear a highly complex, beautifully made creation which is a wearable statement of one’s values and appreciation for the more avant garde fine things in life. It is a statement as much as it is a love of art. Max Busser has resolutely captured a niche section of the luxury wrist watch market, and offers no signs of letting go.

MB&F really started as Max built the Opus watch collection at Harry Winston. A ‘one crazy watch a year’ concept that put Harry Winston on the map to watch lovers. Business-wise the Opus collection was a mixed bag. The high complication timepieces were extremely expensive to make, and didn’t have the profit margins that quartz-based diamond decorated women’s watches did. But quartz diamond watches just aren’t that interesting to people like us, are they? After Harry Winston Max built MB&F and proceeded to continue his concept of the one crazy watch a year concept. The Horological Machine # 3 was the third major creation for the brand, and showcased exactly what MB&F could do. While The HM1 and HM2 were great timepieces, the HM3 really saw Max flexing his design muscles. Of course, the HM4 Thunderbolt takes that even further. All the tech specs and items like that you’ll need about the HM3 can be found here. I have no desire to write all that again. This article is about wearing the watch. Though for dimensional purposes I will remind you that the watch is big, and constructed either out of 18k rose gold and titanium, or like here, in 18k white gold and titanium (titanium mostly for the caseback). The watch is about 47mm x 50mm in size. For my small wrists, even on the smallest size, the watch strap was a bit large in fit. If you have small wrists you might have to lets MB&F know so that they can make a special, slightly smaller strap for you.

If you recall, the HM3 came in two styles, the Sidewinder (seen here), and the Starcruiser.The difference was the placement of the strap. So you could have the two cylinders pointing down or to the side. The custom alligator strap that MB&F uses is quite comfy. It is tapers and the butterfly style clasp is spring loaded to stay securely closed without a lock. You have systems like this on other watches such as many Richard Mille pieces. The lugs are attached to the titanium caseback -so they are titanium with polished end-screws. Finishing and detailing on the watch is fantastic. MB&F really knows what a discerning luxury watch buyer is looking for. Polish is well applied and sophisticated, construction is tight, and presentation is impressive. The whole point of the watch is to get you excited about looking at it (not just reading it). MB&F is interested in the concept of the machine, and how machines can be built in aesthetic, and interesting ways. The core functionality of MB&F watches isn’t intrinsically complex.  This watch tells just the time and date. It is about the design of the movement and the manner of showing the time that is interesting. MB&F wants you to appreciate the thought behind the movement, versus strictly what it does. Max loves symmetrical movements, and most of his watches cases and movements are as symmetrical as they can be. A great example of this is the two large “eye style” gears on the back of the watch case. These are large on purpose, and designed with the cut holes so that you can see the perlage polish on the plate behind them. While these are functional gears, they are emphasized for their symmetrical and attractive design. Few watches show the automatic rotor on the front of the watch, and none that do, do it like the HM3. MB&F’s signature gold “battle axe” style rotor is very well polish and probably the second most noticeable feature on the dial. So much so that it is easy to miss the date disc that goes around it. The date disc turns and is read via a small indicator arrow on the case. The sapphire crystal over the movement section is not only an extremely high quality crystal (measured by clarity), but looks almost transparent. It creates a satisfying effect. With all their playing around with sapphire crystals, MB&F are quickly becoming serious experts on pushing the limits on using interesting sapphire crystal shapes. So the real question for many, is how practical is it to wear a watch like this daily? Well the really depends on who you are. You have to remember that this is a precious object. Not only are MB&F timepieces expensive luxury times, but there aren’t that many of them. If you damage them, servicing them isn’t cheap. So you want to make sure you aren’t wearing them in instances where they can get damaged. That is at least a concern for me. On the other hand, reading the time isn’t that tough. It sure looks it at first, but I got used to telling the time via the linear style cylinder indicators rather easily. This was especially true for the minutes. There is no darkness visibility, but in decent light you don’t need to stress to hard to read the time. Really. And this is coming from someone who is a picky bastard when it comes to legibility.

I personally wouldn’t want to wear the HM3 (or any MB&F) watch all the time. Why? Because I want to keep the novelty strong. Most people who have these watches consider them highlights of their collection. Their secret weapon when wanting a really impressive watch (to impress not only others, but themselves). Do you really want that to be something you over-use? Items like this are best kept as occasional treats to keep your taste buds sharp. You don’t drink from a $1,000 bottle of Scotch daily do you? If you have a watch like this, I recommend keeping it around, looking at it often, and once in a while putting it on and showing it off. That is the best way of featuring this artful little mechanical object in your life. I would gladly put the money down for an MB&F watch if I had the means. As seen here, this MB&F Horological Machine Number 3 “Sidewinder” retails for about $77,000.