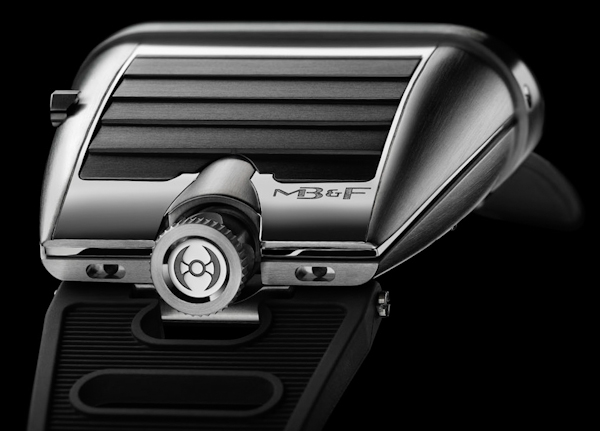 Say hello to the MB&F HM5 watch. The 5th model in the Horological Machine family comes about two years after the release of the MB&F HM4 (hands-on here), and is actually the high-end boutique watch brand’s most affordable watch ever. Max Busser of MB&F continues to assert his youth and the inspiration that formed his tastes in a watch that is not only motivated by an era, but also directly inspired by some of its most iconic creations.

Last year while waiting for a new Horological Machine model we were greeted with the Legacy Machine Number 1. We now know that MB&F will stagger new HM and LM models each year – at least for the time being. So HM5 this year and LM2 next year. Inspired by “driver” and LED watches from the 1970s, the HM5 is nicknamed “On The Road Again.” This isn’t just because it is based on watches meant to be worn while driving, but also because the design of the case is meant to look like a sweeping fastback with rear window slits of cars like the iconic Lamborghini Miura and other such exotic automobiles. Like the Lamborghini, the HM5 has slits on the rear-side of the watch. On the case of this watch they actually open and close using a small lever on side of the case. What do these moving louvres do? Well on both the car and the watch they sit over the engine. MB&F designed them to be opened to allow light in. When light enters, it can charge up the SuperLumiNova on the discs that tell the time. You see, the discs actually lay flat on the movement. They only appear to be angled to the side due to a specially designed sapphire crystal lens which angles and magnifies the discs. The numerals are printed with SuperLumiNova, so when they are charged with light you can see them in the dark.

It is true that the slits don’t technically need to open and close as I can’t think of a really good reason for them to stay shut. However, this is meant to be a cool little machine art watch and that extra little feature does add to the “wow” factor. We are talking emotion here, not efficiency. The entire case is shaped like a wedge, and the initial limited edition version of the On The Road Again will be produced in zirconium. Later versions will likely mix it up a bit. At about 49mm wide it isn’t very small, but it is cool. I got to put on a prototype of the HM5 a while ago, and true enough to the wedge watch look, it as a very unique stance on the wrist.

Wedge watches or side-view watches were designed to allow someone to read the time easily while not removing their hands from a steering wheel. Some historic models were mechanical such as the HM5, while other models had digital displays using red LED lights. Those make for some interesting collectors items. Does a timepiece like this look strange on the wrist? Of course. Any more strange than your “typical” Horological Machine? Not at all. MB&F designed a sapphire crystal prism that displays the numerals to the side as they are refracted for the wearer’s eyes. The crystal was difficult to design and is actually tinted in parts. There are green windows that aren’t tinted to help you read the correct time properly. To make the numerals large, the prism magnifies the numbers by 20%. It all makes for a very unique look for the MB&F brand, but one that is certainly reminiscent of the era that the HM5 is trying to elicit.

The case design is elegant and very much looks like a part of the car. This of course is the second Horological Machine watch that has you reading the time from the side. This was a hallmark feature of the HM4 Thunderbolt. I have a feeling MB&F played with the idea of both at the same time as they have thematic similarities. On the bottom of the HM5 you see a view of the movement, and at the opposite end of the display is a large, beautifully ornate crown and two little “exhaust” holes. These holes are actually meant to be water vents assuming the piece gets water in it. If you understand the construction of the case this makes a bit more sense.

HM5 has an inner and outer case. The inner case is more about protecting the movement and holding the sapphire crystal prism in place. The outer case is more the visual body of the watch. If water enters through the louvres, the exhaust holes are there to let water out. It is all fun and magically over-engineered. We love it don’t we? Inside of the MB& Horological Machine No. 5 is a movement designed by Jean-François Mojon as well as Vincent Boucard of Chronode. The automatic movement is built on a gear train from a Sowind (Girard-Perregaux) movement (as is the case with many other MB&F watches) and then developed specially for the HM5’s design. Once again you get that 22k gold “battle axe” style automatic rotor that we love so much. Attached to the case is a rubber strap with oval portholes.

It is really all of the little touches that make this an MB&F. Nothing about this piece says “practical,” but everything about it is appealing. It is surprisingly congenial for an Horological Machine, though its base design is historically quite avant garde. MB&F will limit this version of the HM5 “On The Road” to just 66 pieces (thankfully it was not another 88 piece limited edition – getting really sick of those) with a relatively affordable (for MB&F) price of $63,000. Look for a hands-on aBlogtoWatch review at the MB&F HM5 “On The Road Watch” soon. Tech specs from MB&F: Horological Machine No.5 On the Road Again

Limited edition of 66 pieces in zirconium