I don’t know how many truly great collaborations there have been between watch brands, but it’s not many. These days there is no shortage of watch brands partnering with non-watch brands, car brands, and media outlets but you almost never see it with two watch brands. However, MB&F and H. Moser & Cie, led by Max Büsser and Edouard Meylan, respectively, joined forces to put out this pair of limited edition steel watches. The H. Moser X MB&F Endeavour Cylindrical Tourbillon and the MB&F X H. Moser LM101 take some of the best design cues from each other while maximizing their shared relationship with Precision Engineering AG. 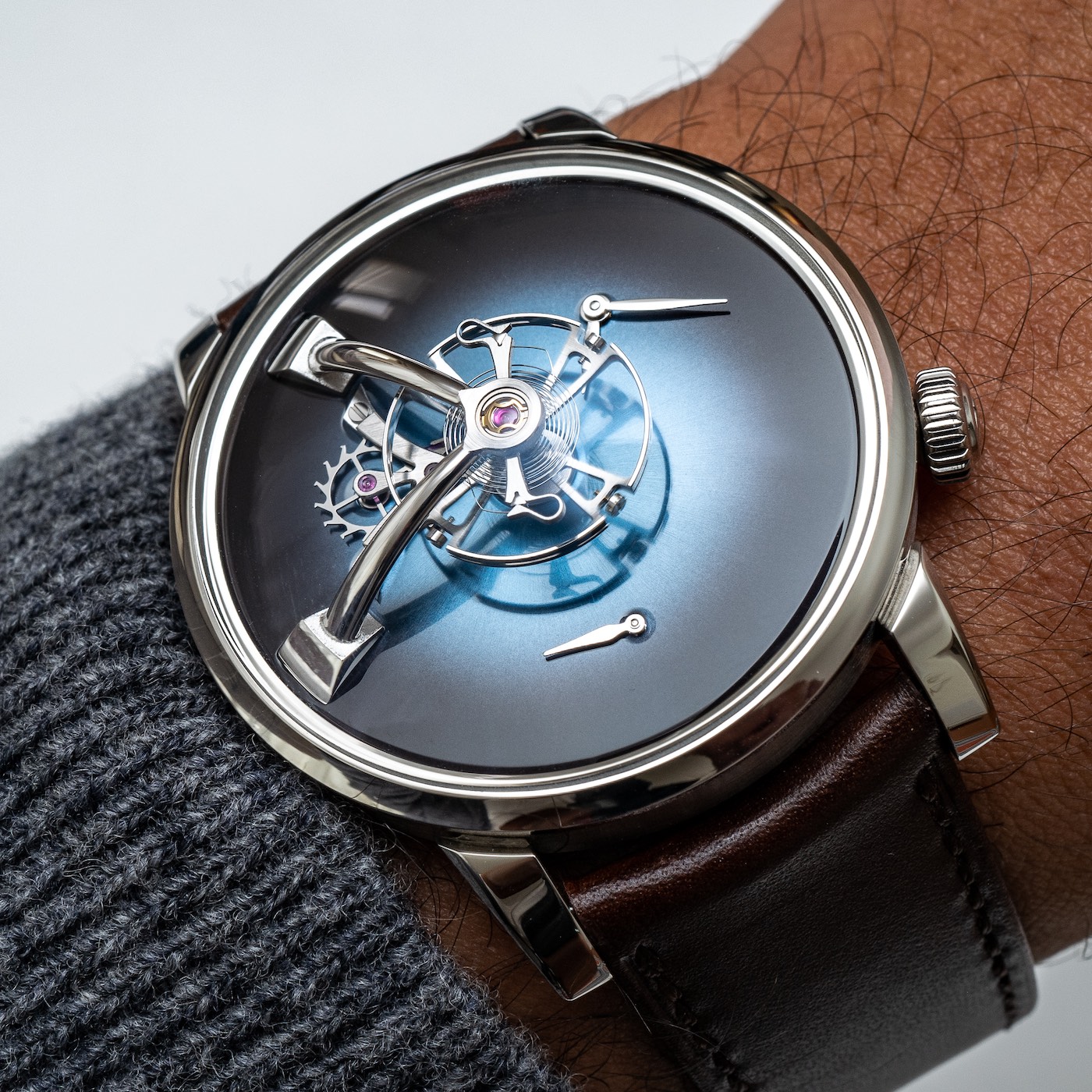 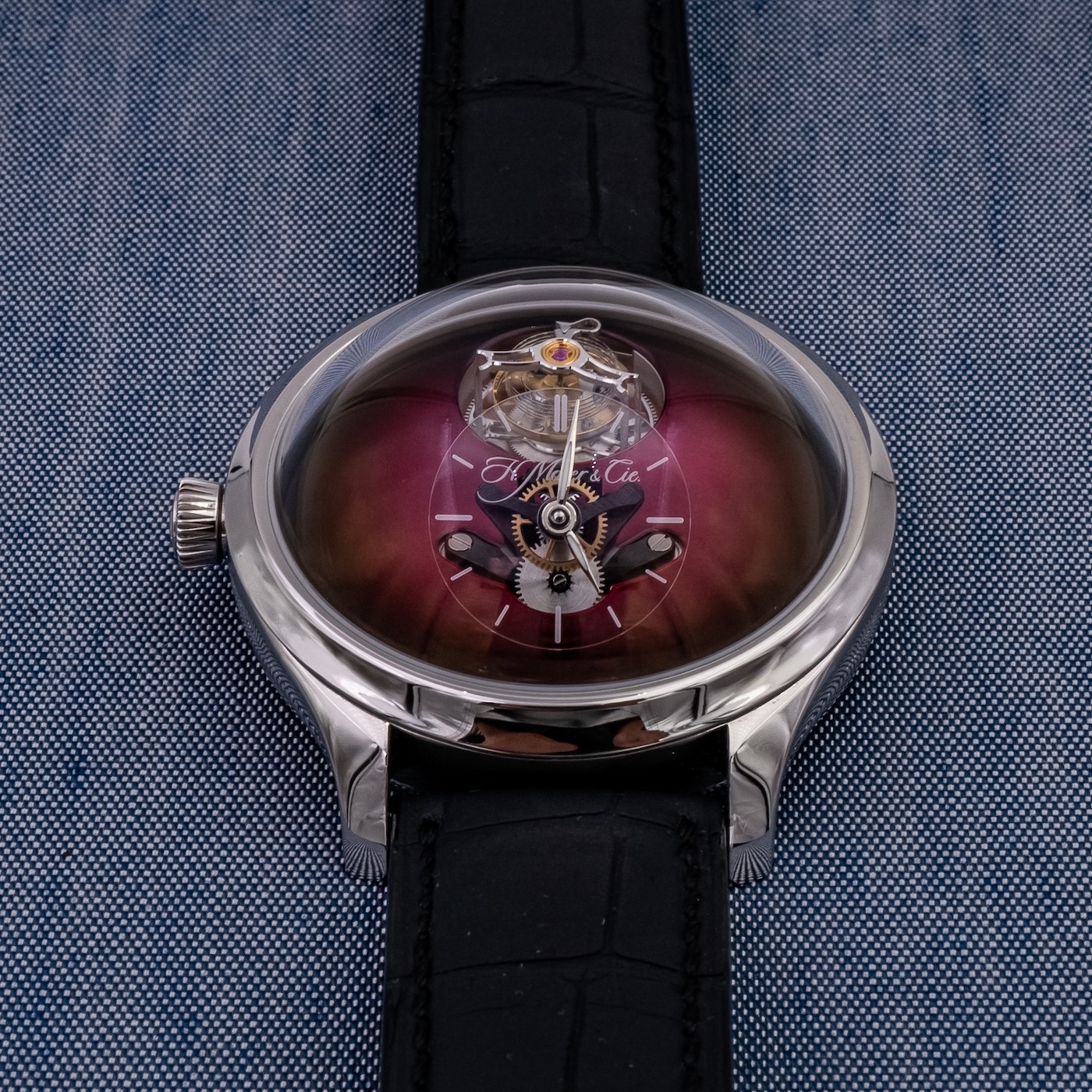 How did the two get connected and carry out this collaboration? According to the brands:

Maximilian Büsser says: “When I called Edouard to tell him that I wanted to collaborate on a creation, I mentioned that I really liked the double balance-spring, the Moser fumé dials and the Concept watch series. Edouard immediately told me that he would let me borrow these features, but on condition that he could also reinterpret one of my machines. After an initial moment of surprise, I gave it some thought. Being 50% Indian and 50% Swiss, I am firmly convinced that mixing DNA creates interesting results, so why not try the experiment in watchmaking?” 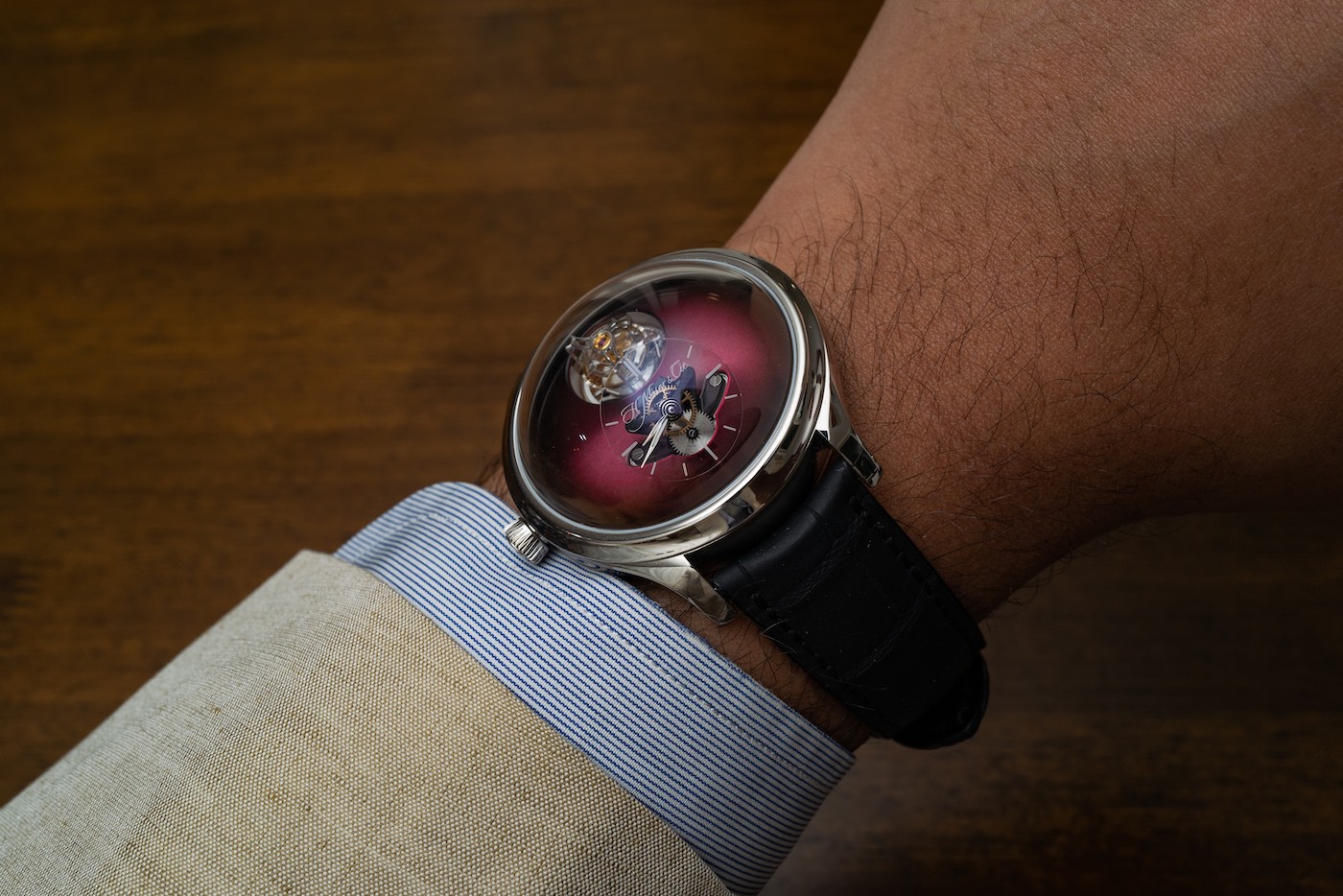 I was absolutely floored when I first picked up the Endeavour Cylindrical Tourbillon and put it on my wrist. It’s not accurate to describe it as a bauble since there is a highly sophisticated horological mechanism at work inside, but it is, above all, designed to delight. The idiosyncratically attention-grabbing and intentionally impractical domed sapphire crystal design makes it basically impossible to forget you have this work of art on your wrist. The Endeavour Cylindrical Tourbillon case will be immediately reminiscent to many as a take on MB&F’s first women’s watch, the Legacy Machine Flying T and last year’s MB&F Legacy Machine Thunderdome, being sized right between the two. The domed display case (which reminds me of the glass covering over the enchanted rose in Beauty and the Beast shrunk to fit on a wrist) rises 10mm over the 9.4mm-thick case.

There are five fumé dial variants: Funky blue; Cosmic Green; Off-White; Ice Blue; and Burgundy, which is the one I spent time with and that you see here. There are just two distinct dial aspects across the fumé canvass. At 12 o’clock is the one-minute flying tourbillon that has a cylindrical balance spring, done by Moser’s sister company Precision Engineering AG. This is the same balance spring that was first used in the MB&F LM Thunderdome, which itself was a masterpiece in three-dimensional movements. 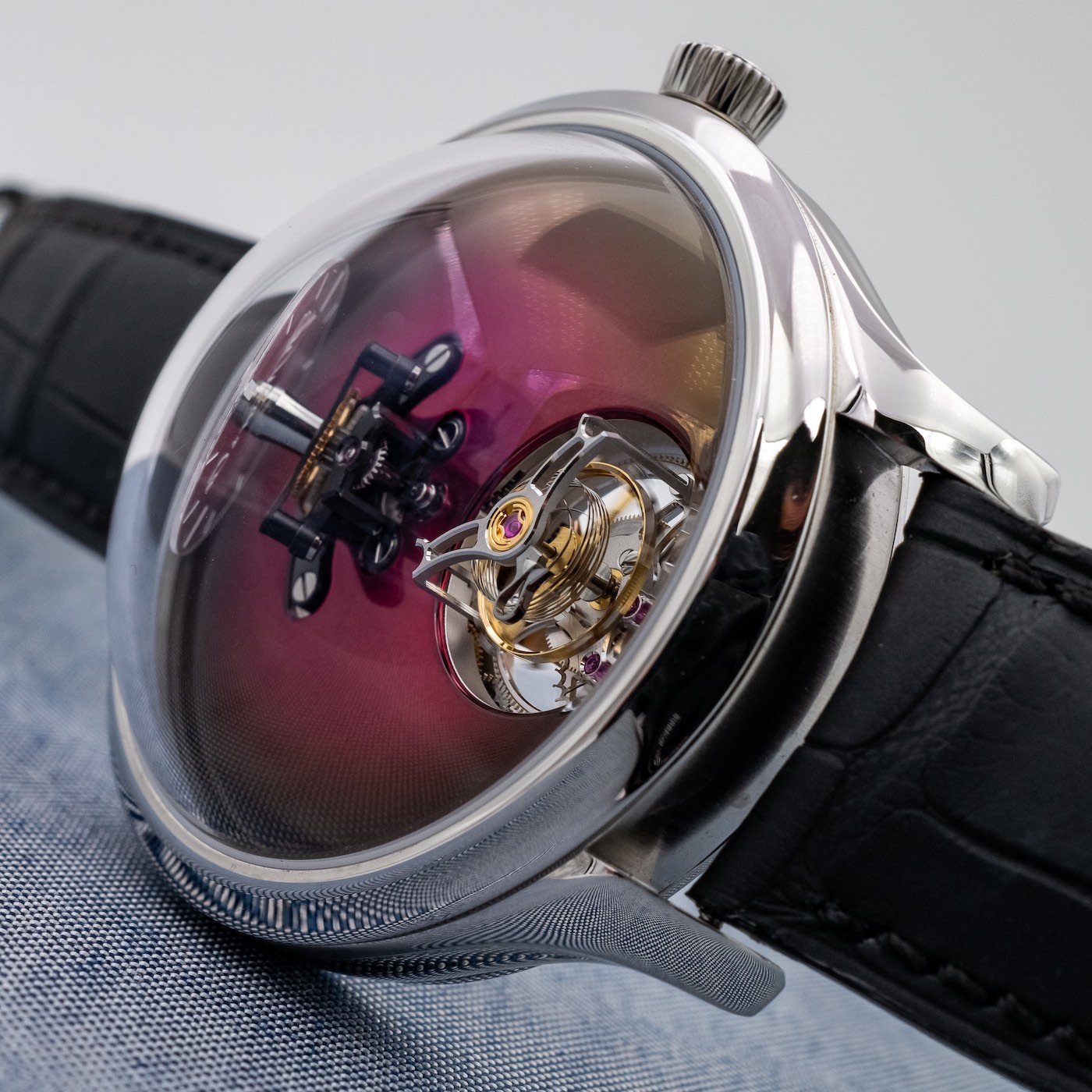 Having a relatively tall cylindrical balance spring, as opposed to a more real-estate-conscious flat balance spring, has everything to do with the theatrical intent behind its design. It’s a marvel to watch, almost resembling an organ in the body, concentrically at work. Obviously, there is a horological motivation in addition to aesthetics with improved isochronism due to a reduction in friction. 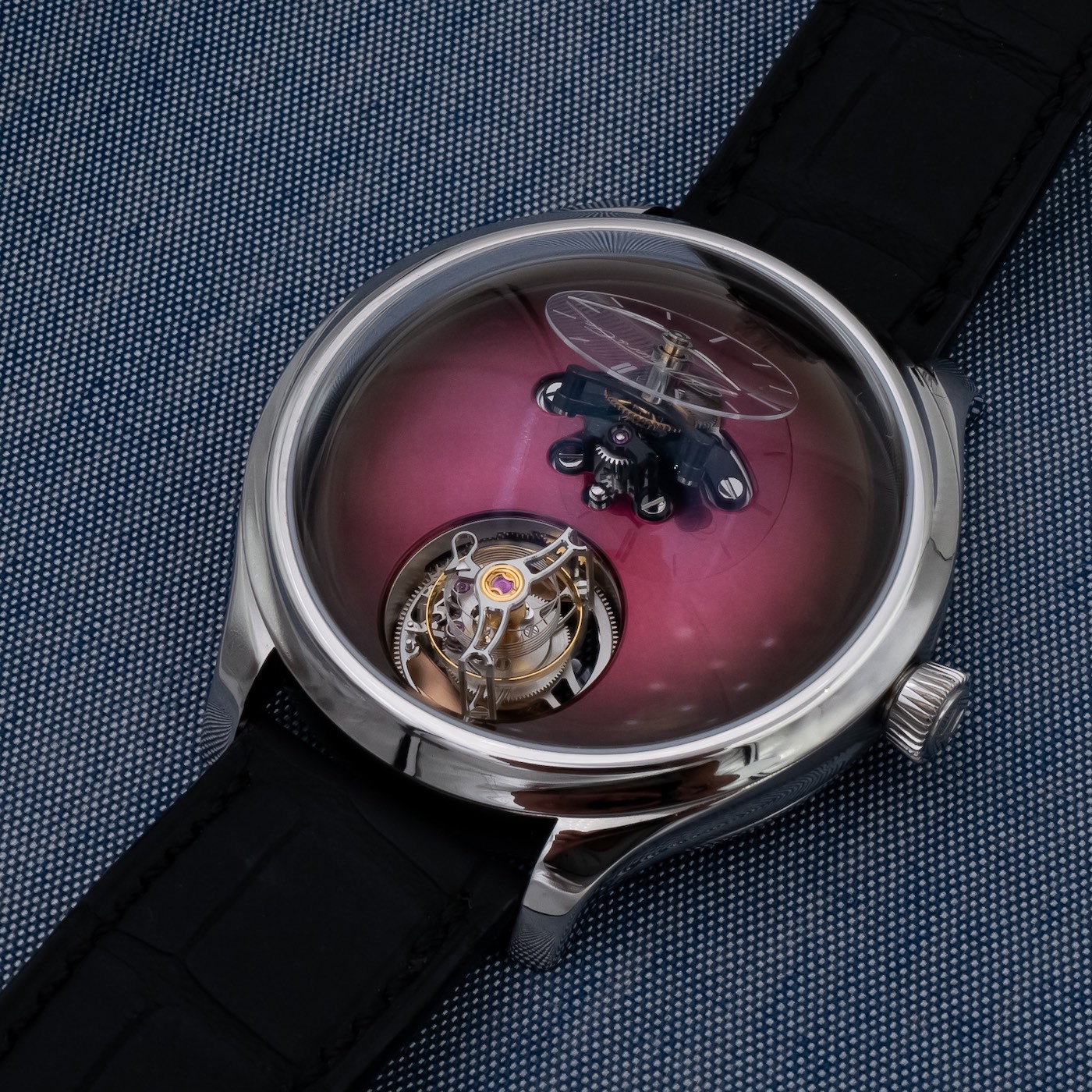 At six o’clock is a Moser take on the MB&F tilted subdial design, which was done in white lacquer on the LM Thunderdome but is done in sapphire on the Endeavour Cylindrical Tourbillon. The reason behind using sapphire is simple — they wanted to have as little disturbance of the fumé dial as possible. Tilted at 40 degrees, the subdial is intended to really only allow the wearer to tell the time. Fortunately, the hour and minute hands are actually pretty legible, which is still important even on a watch like this. 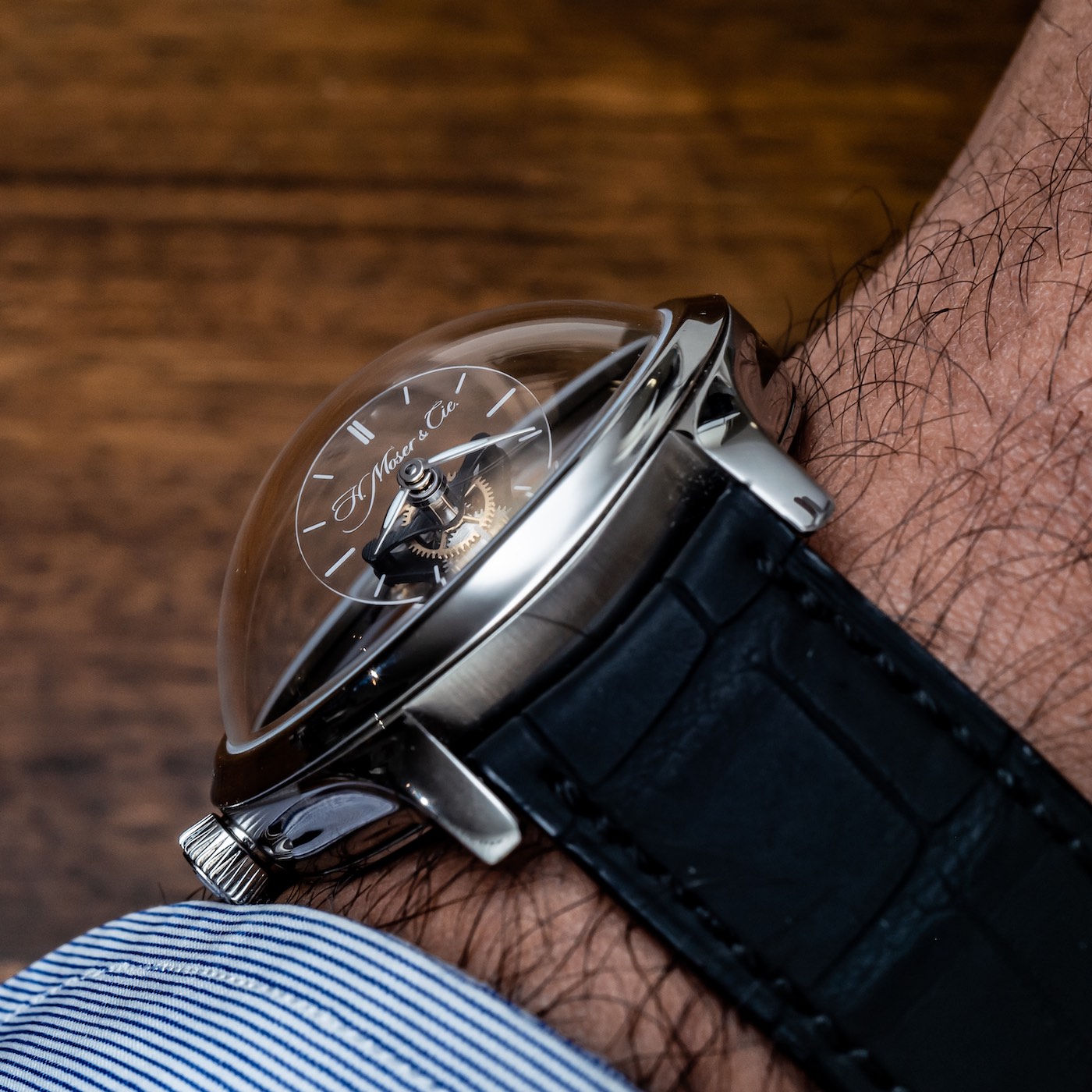 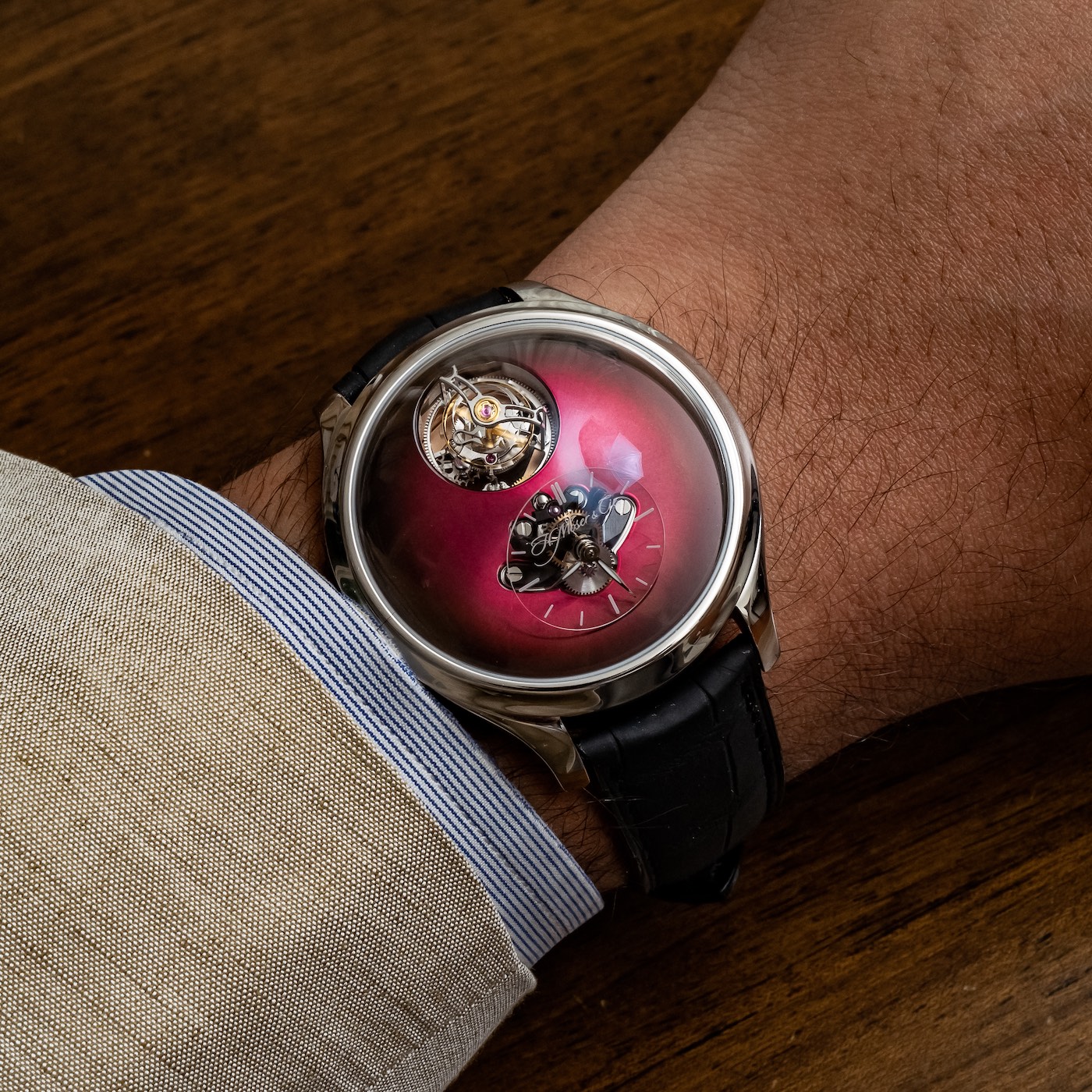 Beneath the subdial sits the blacked conical gear train, which appears to fan out like mechanical peacock feathers from certain angles. I believe the MB&F HM9 also had a unique conical gear train system for its horizontally oriented subdials. All this is powered by the new HMC 810 three-dimensional movement, made possible by Precision Engineering AG, which also worked with MB&F on its LM Thunderdome movement. With a cylindrical balance spring, one-minute flying tourbillon finished with skeletonized bridges, and a recognizable gold rotor with Moser logo, the HMC 810 operates at 21,600 vph and has a 75-hour power reserve. 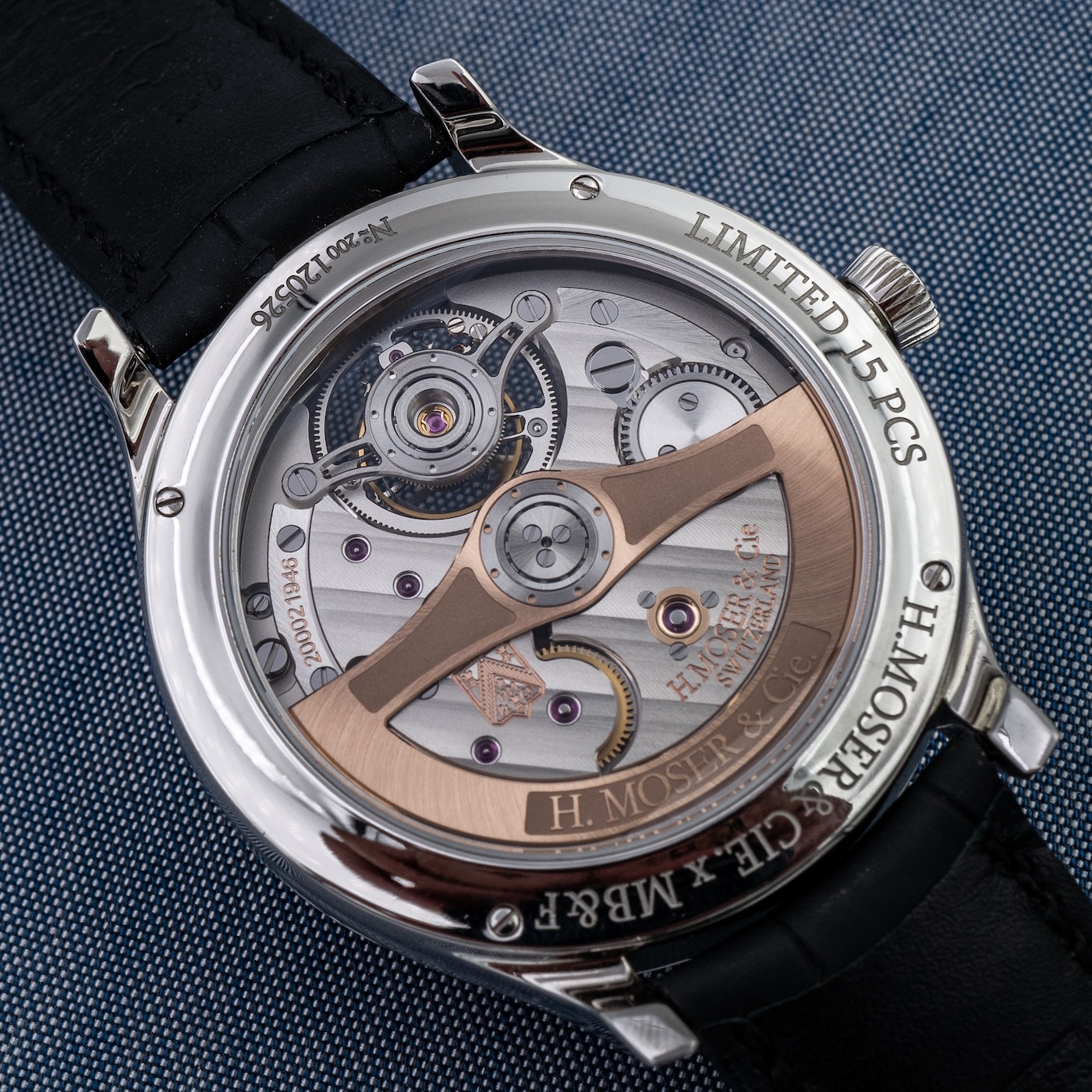 All five variants of the Endeavour Cylindrical Tourbillon are done in steel, measuring 42mm-wide and 19.5mm-thick with the domed crystal (9.4mm without). The overall quirky vibe of the piece is furthered by the crown being at 9 o’clock, which is certainly a little disorienting when wearing it for the first time. There will be a total of 75 H. Moser & Cie X MB&F Endeavour Cylindrical Tourbillons, with fifteen pieces in each of the five colorways. 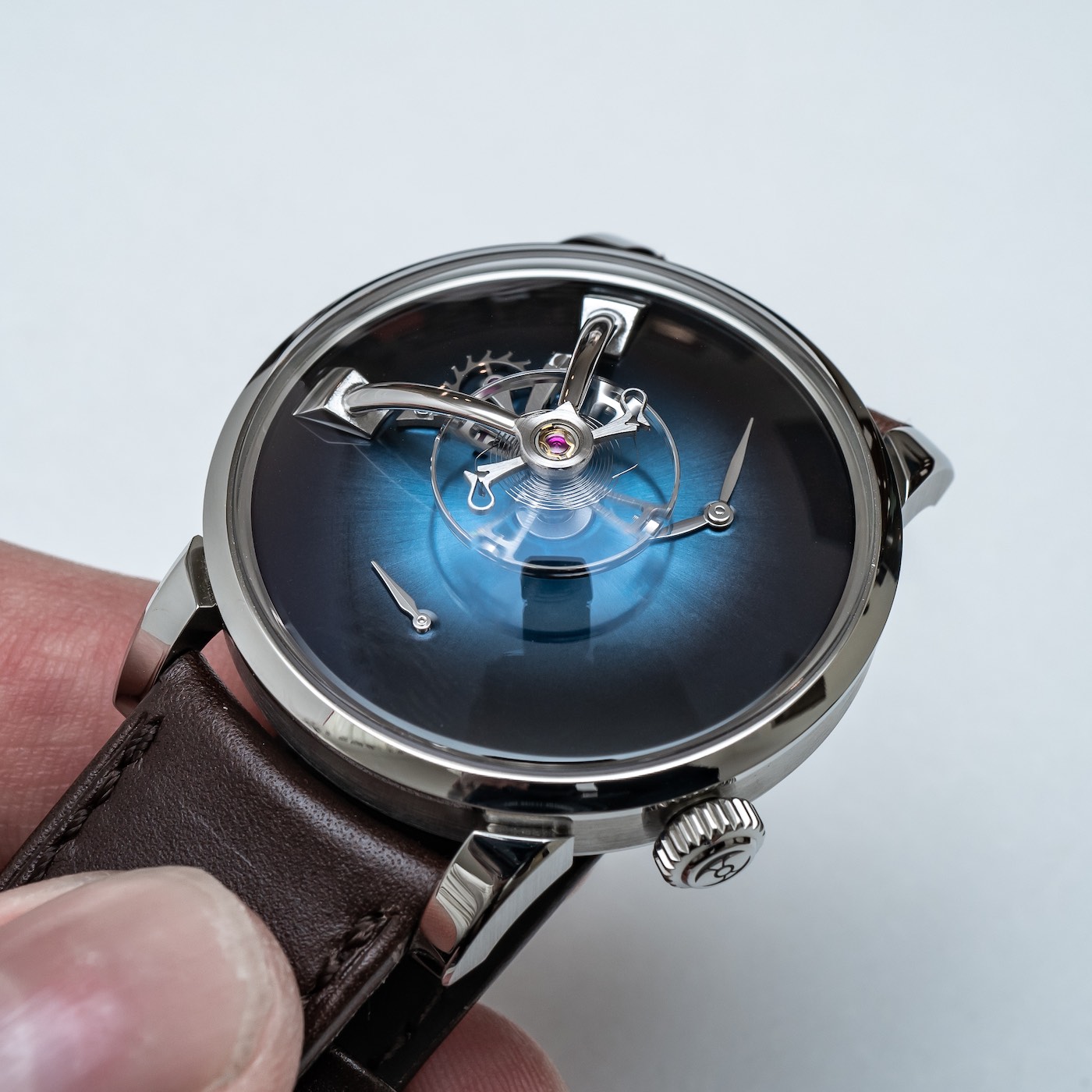 The LM101 is what happens when MB&F’s base Legacy Machine LM101 meets Moser’s minimalist-dial Concept line.  The result is a novel and fresh take on the Legacy Machine that, like the Endeavour, feels like a true thoughtful collaboration that is executed with near perfection. Already one of the most, if not the single-most, wearable MB&F watches, the LM101 is getting new life breathed into it since debuting back in 2014. There are four variants of this watch: Aqua Blue fumé; Red fumé; Cosmic Green fumé; and Moser’s stunning Funky Blue fumé, which is the version I got my hands on.

The most immediately noticeable departure from the original Legacy Machine 101 is the removal of the floating subdials, leaving just the hour/minute and power-reserve indicator hands. As much as I enjoy MB&F’s recognizable subdials, I would prefer this iteration over the classic a hundred times out of a hundred. The brand name, logo, and any text whatsoever have also been removed from the dial, which is an echo of the Moser Concept collection, resulting in a clean dial that allows the focus to stay on the most essential elements of the watch. 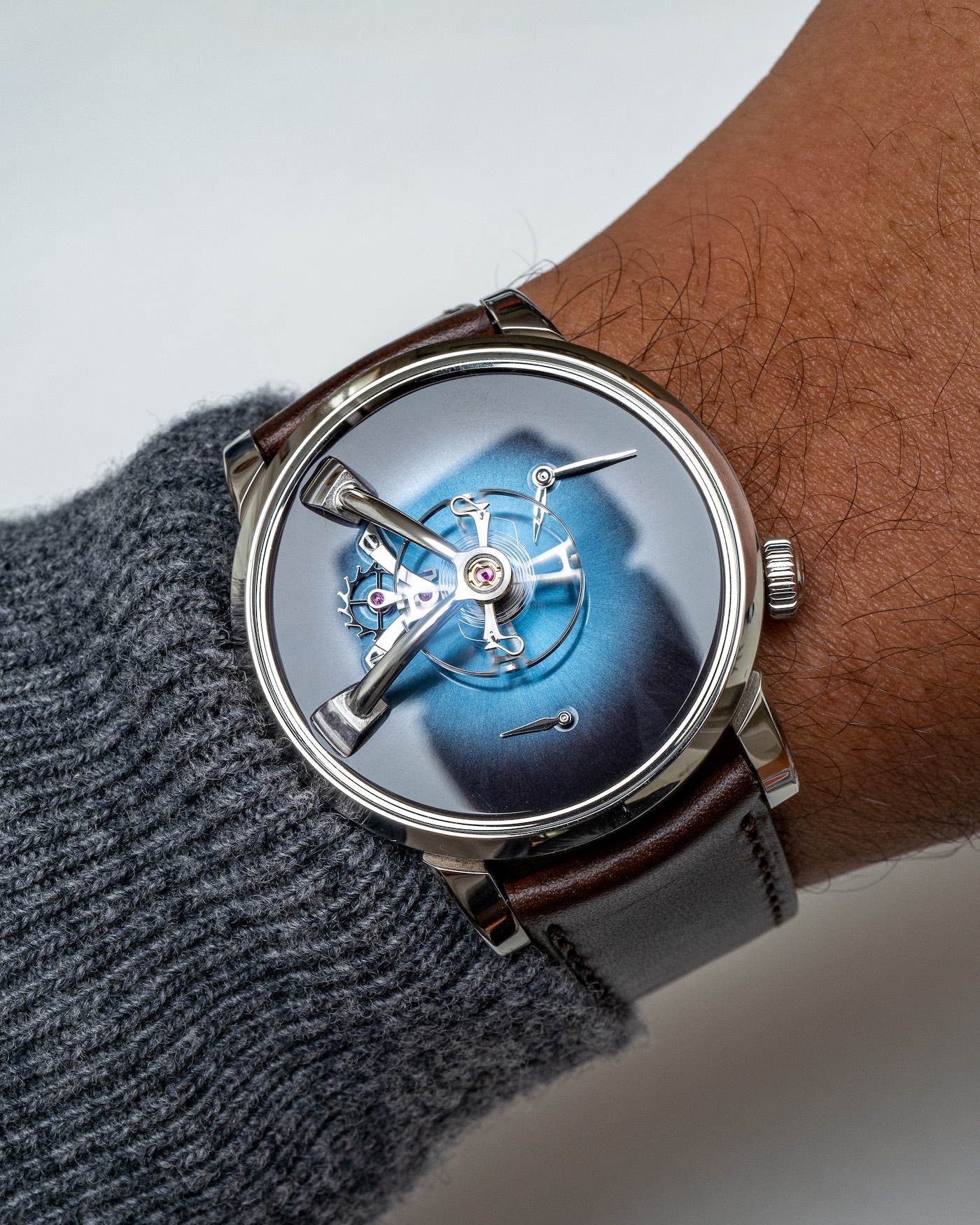 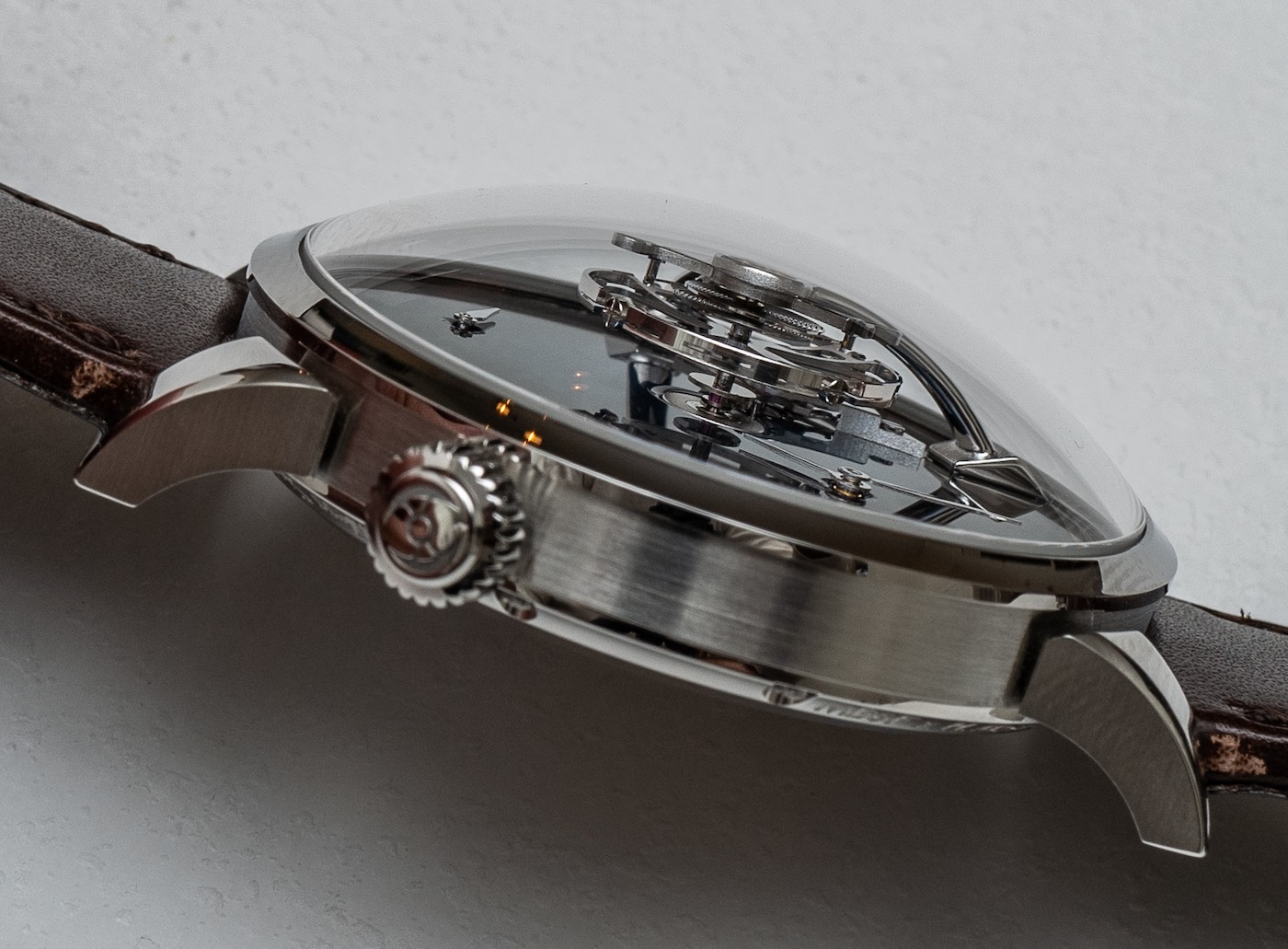 Of course, that large 14mm-wide centered balance wheel and its supporting bridges dominate the dial. Still visually wondrous and architectural, there is now a Straumann double balance spring to improve accuracy and isochronism, courtesy of Precision Engineering AG.

The double AR-coated sapphire crystal is domed (though, obviously, nowhere nearly as much Endeavour Cylindrical Tourbillon), allowing for a surprisingly legible view of the dial. This AR coating is doubly important because there’s nothing more disappointing than having to struggle to appreciate the design and finish on a watch like this. 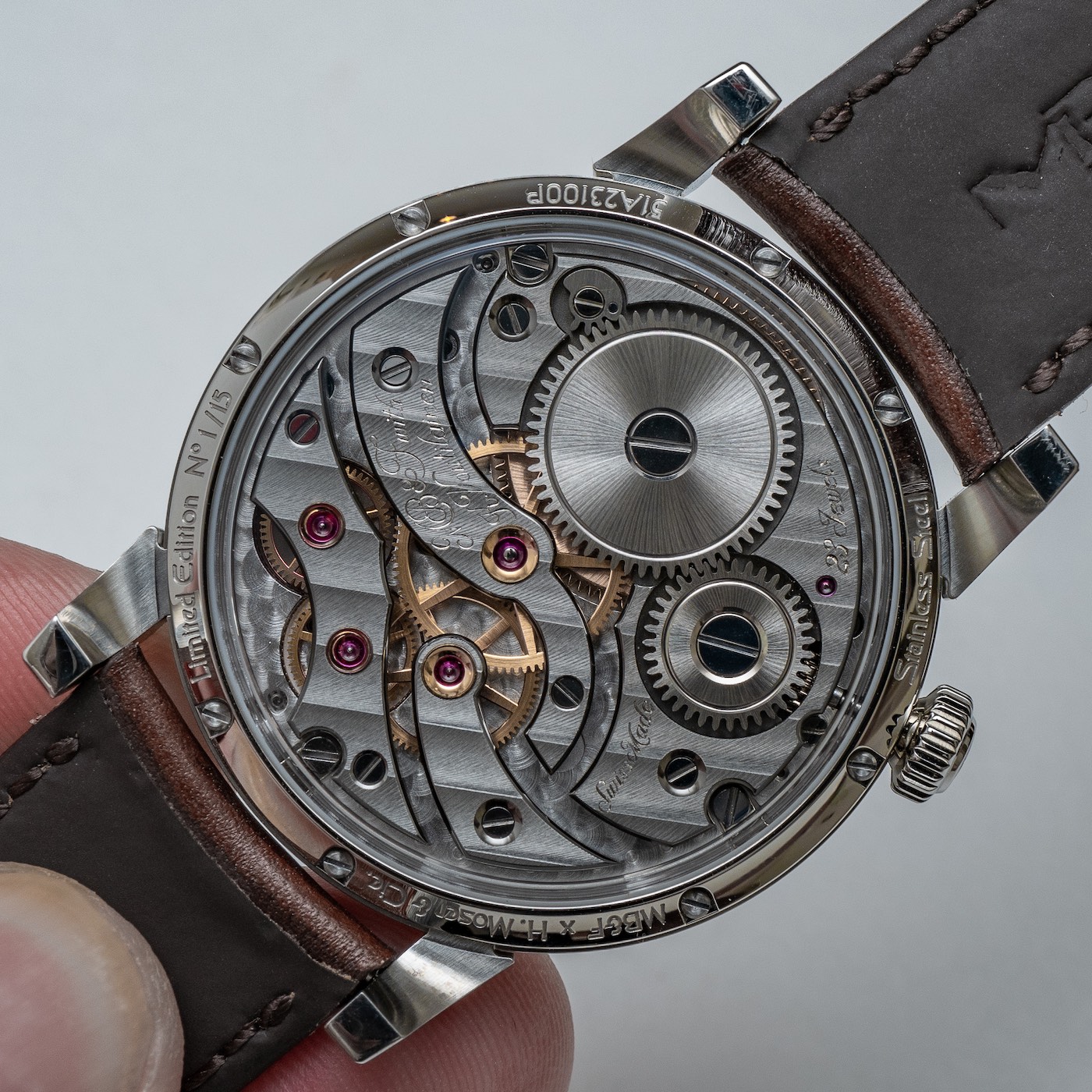 The manually wound movement seen through the case back on this LM101 is not finished by Kari Voutilainen as the original was, but rather is given a slightly more contemporary treatment. With NAC black bridges, hand-done engraving, and Geneva stripes, the movement is all hand-finished and expectedly beautiful in the metal. With a 45-hour power reserve, the LM101 movement operates at 18,000 vph which allows for the unique structure of the movement with its view of the large balance wheel on the dial. 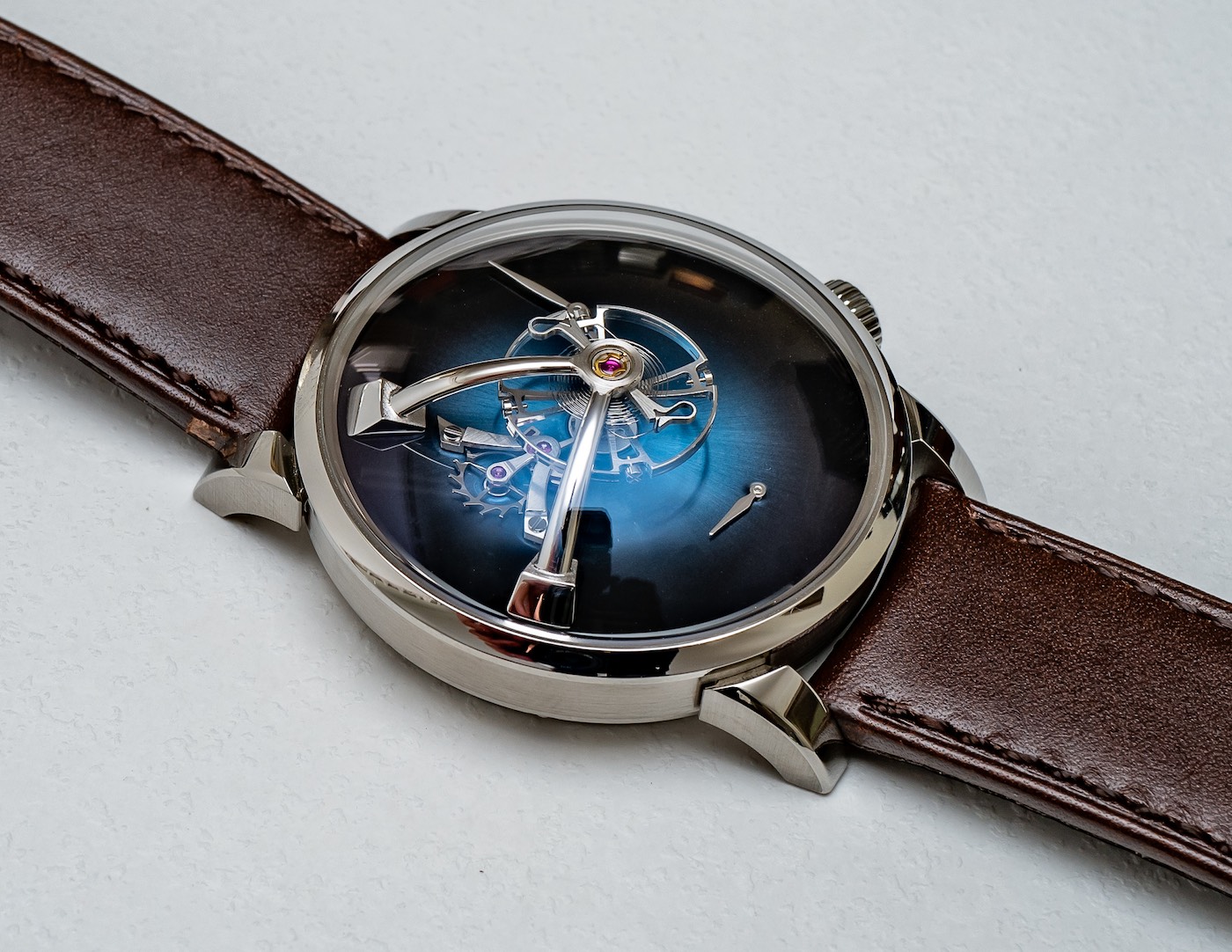 The 40mm-wide and 16mm-thick steel case with off-center crown is pretty ideally sized, in my opinion. In fact, it’s downright wearable. On the wrist, the LM101 wears perfectly and having a more, let’s say, conservatively sized sapphire crystal than the Endeavour doesn’t hurt either. 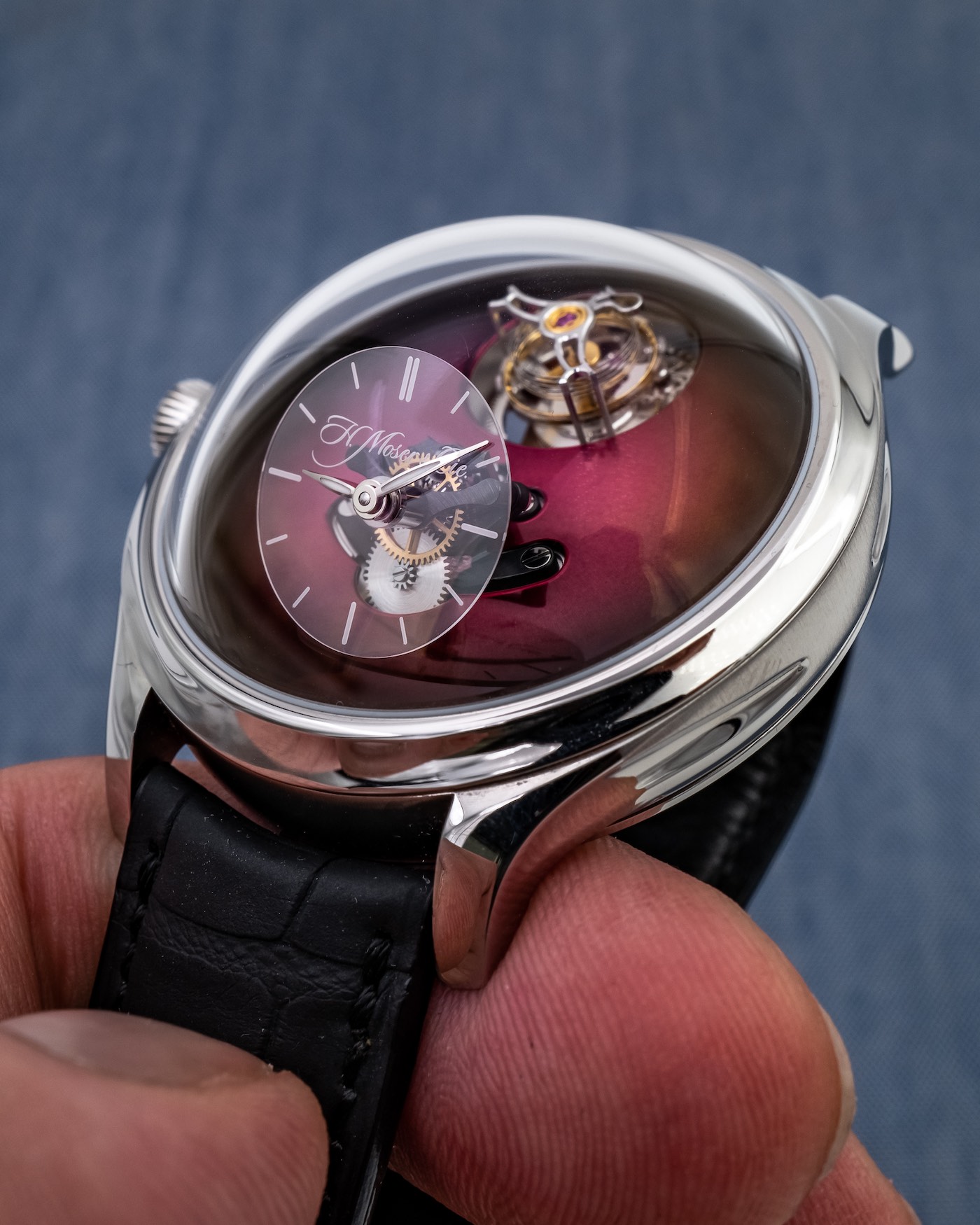 I truly think these are two of the most appealing watches released recently by either MB&F or H. Moser & Cie, which is solid praise for both of them. With Precision Engineering AG’s resources and a clearly present mutual appreciation between these two independent brands, the two were able to pull off a serious design and watchmaking focused collaboration.

The H. Moser & Cie X MB&F Endeavour Cylindrical Tourbillon will be available in five variants: Funky Blue fumé, Cosmic Green fumé, Off-White fumé, Burgundy fumé, and an Ice Blue fumé, the last of which will only be available on the Moser e-commerce page, while the rest will be available at authorized retailers. Each variant is limited to 15 pieces, each with a price of $79,000. You can see more at h-moser.com.

The MB&F X H. Moser LM101 will be available in four variants: Aqua Blue fumé; Red fumé; Cosmic Green fumé; and Funky Blue fumé. These will only be available at authorized retailers. Each variant is limited to 15 pieces, each with a price of $52,000. You can see more at mbandf.com.