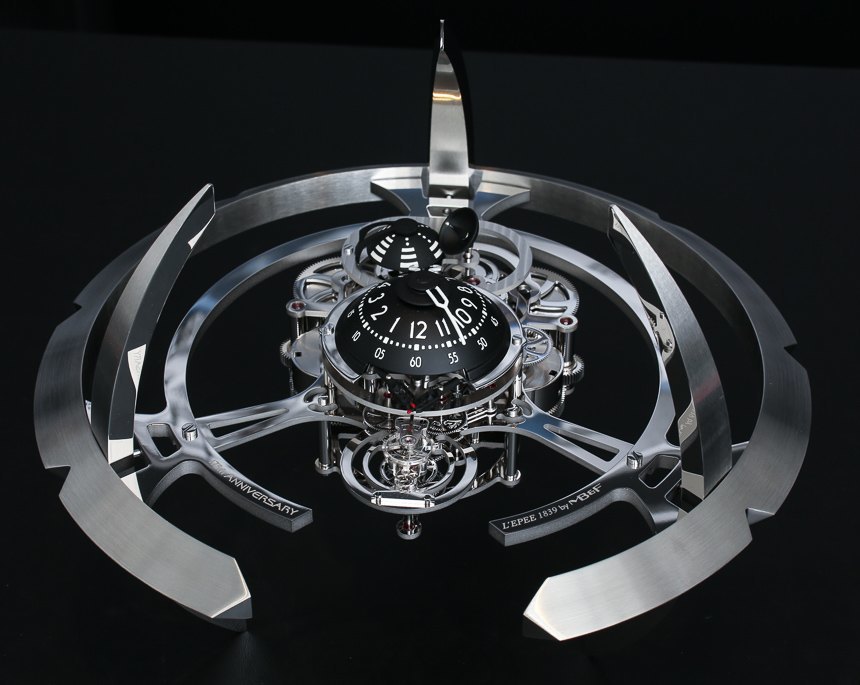 Yes, the MB&F Starfleet Machine clock is totally inspired by Star Trek. Specifically, it is inspired by the Deep Space Nine station from the Star Trek television show of the same name. Produced in collaboration with the Swiss clock maker L’Epee, this is the second such non-wrist watch “Machine” from MB&F that started with the MB&F MusicMachine they produced with Reuge in 2013.

This isn’t even the only high-end horological item inspired by Deep Space Nine from the last year. We previously brought you news of the Vianney Halter Deep Space Tourbillon watch that was also inspired by Star Trek. I will also add the high-end watch maker De Bethune as a company that is inspired by Star Trek in their designs – and frankly, there are others. So what is up with Star Trek and other science fiction inspiring high-end watches and related items such as the Starfleet Machine clock? My theory is that it has to do with what inspires the designers. A generation ago it was cars, airplanes, and boats, and more recently it is science fiction, movies, and video games. Sound funny or strange? Maybe it is, but it is also logical when you think of what many of today’s designers grew up with. I believe Deep Space Nine was the Star Trek series after Next Generation, and while it ended 15 years ago, the Star Trek genre continues to inspire fans. Consider items like the MB&F Starfleet Machine and the other items I mentioned to be forms of ultimate fan art.

In luxury, few things are more entertaining than the collision of two worlds. With MB&F, it is often three. Here you have a combination of art, horology, and popular culture. Most any male seeing the Starfleet Machine thinks “cool, I want one of those.” Even when we wouldn’t know where to put it, and on top of that, most people cannot afford it. Then again, as it is an MB&F, not many people need to be able to afford it, as only 175 will be produced. L’Epee among a small select group of high-end clock makers, and their work is very nice. Clocks enjoy a distinct form of collector attention, and because they are meant to be observed and not worn, for the most part they attract a different kind of consumer. Having said that, anyone with an appreciation for what MB&F does can easily enjoy this collaborative work. Perhaps the biggest lesson anyone can learn from MB&F is how well they play with others. While other brands are focused on claiming “in-house made” and “we did it ourselves,” MB&F realizes the benefit in combining the talent from multiple brands to make something amazing as a result – that is not only diplomatic, but it makes for clever marketing as well.

The Starfleet Machine isn’t huge, but I wouldn’t call it portable, being almost 32cm wide and 21cm tall. Produced from mostly solid stainless steel and brass, it isn’t light either – but that is OK. When I first saw it, I imagined how deadly it would be as a weapon if sharpened and hurled at a foe in some type of trebuchet, given the many pointy edges. The clock mechanism and mechanical movement are vividly displayed and beautifully designed in the center of the piece. The dome on the top of the clock indicates the time as read from the top down with the two arching hands. A smaller black dome serves as a power reserve indicator, and to the side of it is a little decorative radar-style antenna.

In front of the dome that indicates the hours and minutes is a jetting section that contains the balance wheel and escapement assembly. It makes for stunning visuals. Just in front of them are two “laser cannons” that constantly move. That is because the red-tipped black laser cannons are the seconds indicators – sort of. Each of them moves at the same time once per a second and like a retrograde hand they pop back to their original positions. So the visual is of two laser turrets constantly moving – which, yeah, is pretty cool. Finishing on the MB&F Starfleet Machine base and movement is very nice and thankfully varied. There is so much to look at and appreciate, and anyone interesting mechanical objects is going to like it. Some surfaces are polished and others are given a Cotes de Geneva striping. The numerals on the hour and minute indicator dome are iconic to MB&F, which helps people recognize the design as coming from them.