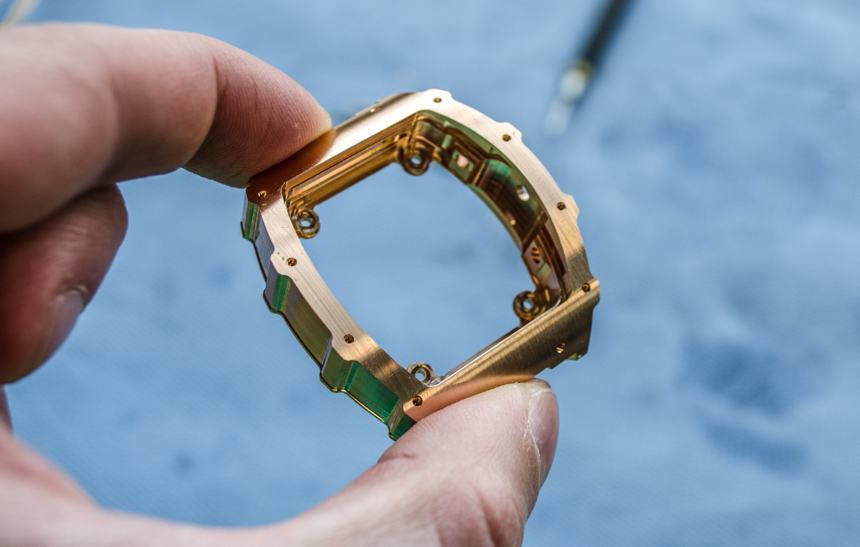 It may be a bold statement, but I like to think about the brand Richard Mille as both the jester and the rocket scientist within the fictional realm of haute horlogerie. Since its launch in 2001, and especially during the last couple of years, it has not only dreamt big time and time again, bringing down at least some of the old-fashioned walls which older governors of fine watch making had built around themselves, but also had the know-how to back up those extremely bold ideas and realize them. Probably the first logical question that springs to mind upon a first encounter with the brand is the question of “why?” as in, why would anyone build their company on the fundaments of admittedly and consistently bold designs and ideas coupled with luxury pricing? Time provided the answer: because it works.

The first page in the success story of the luxury sports watch has arguably been written by the Royal Oak of Audemars Piguet, demonstrating the validity of this market segment. What Richard Mille did during the early 2000s is that they took the concept of a high-end sports watch a step (or a mile?) further, sensing that there still was room to grow, both in terms of crazy designs as well as crazy prices. And grow big Richard Mille did, as they have been expanding by around 15-20 percent year over year, reaching an annual production of around 3,400 watches. With prices starting at €40,000 (or around $54,000) for the very “cheapest” model in their collection, these figures indicate just how much extra potential there was in this niche. Being familiar with the – rather unlikely, albeit beautifully functioning – reasoning behind the creation and running of the brand, the next question should perhaps be “how?” as in, how can the they conceive, manufacture and perhaps most importantly, how can they sell such incredibly complicated (and often stratospherically priced) pieces so successfully? With these questions on my mind, I set out to go hands-on with some of the most outrageous models of the brand in their Geneva boutique and to visit the case making and movement assembling facilities of the brand in Les Breuleux.

I was greeted by Theodore Diehl from Richard Mille Watches and some fellow journalists, together with Rob Kitto who runs the Richard Mille boutique at the Hotel Kempinski, with its splendid view on Lake Geneva. It was here that I got a chance to closely inspect some of the most highly complicated pieces of the brand, such as the ultra-light weight RM59-01 Yohan Blake tourbillon (hands-on here), the laughably heavy RM057 Jackie Chan “gold dragon tourbillon,” and some other pieces, all outrageous in the ordinary Richard Mille way. Dizzying price tags aside, handling some of the most important and technologically impressive models of the brand made for a great start, as doing so made me all the more curious about exactly where and how they were made.

Given the purpose of this article, which is to discuss the manufacturing of Mille’s timepieces, we really cannot go into much detail of all the diversely complicated pieces they offer. With that said, if you feel you are not yet familiar with the creations of the brand you may browse and read all the articles we have written about these pieces by clicking here.

Without further ado, let’s begin our manufacture visit or, in other words, our journey behind the scenes at Richard Mille. Opposing one of today’s key marketing trends and yet in line with the practices of the majority of the industry, there is no one singular manufacturing facility that builds Richard Mille watches from A to Z. Instead, the brand works with a number of suppliers and partners in what is a complex system of co-operations. Our article on the history of ETA explains this historical structuring of the industry in more detail, and for now, we will just say that ever since the 18th century, watch manufacturers have worked with a great number of diverse suppliers such as case makers, blank movement (also known as ébauche) makers, dial painters, and many others. As a direct consequence, one company has scarcely comprised all manufacturing capabilities simultaneously. With that in mind, we must note that we have seen an ever-increasing number of brands try and concentrate on bringing most manufacturing processes “in-house,” and there are two main reasons for that. Primarily, they were forced to do so, as key components and base movements have become much more scarcely available, both as a result of high demand as well as restrictive measures from major suppliers – again, all discussed in our ETA article. Secondly, being a “manufacture” makes for a strong and much preferred marketing tool, often also allowing for a pricing premium on watches equipped with “manufacture calibers.”

It is widely communicated – and hence generally accepted – that complete vertical integration (i.e., producing everything in-house) is superior to other manufacturing methods. In some cases, that is actually true, and we have seen that work out beautifully for some brands. However, when it comes to some truly high-end watches with extraordinary technological solutions, produced in relatively limited runs, investing in having specially designed cases, movement parts, dials and everything else made in-house is practically impossible. Instead, what most of these brands will do is work with some of the best specialized suppliers in Switzerland.

These co-operations create a hub of suppliers, often held together by co-ownerships. When it comes to Richard Mille and the production of its cases, movements and other components, the situation gets rather complicated and certainly necessitates some scarcely provided explanation. The key companies – which are, again, all connected by various co-ownerships – are the following: Horometrie SA, Valgine, Audemars Piguet Renaud et Papi (APR&P), as well as ProArt and the Vaucher Manufacture Fleurier (which we visited last year). Let’s briefly discuss the varying roles these partners play when it comes to the conception and production of a Richard Mille watch. To begin with, Horometrie SA is the legal entity of Richard Mille and the company responsible for the brand’s activities. As far as the conception of new designs and ideas is concerned, it is Richard Mille and his team of designers and engineers at the brand that conceive new designs and ideas. Things get more complicated when it comes to the realization of those concepts. A key player in that is Valgine SA, a third party supplier and private label watch company that works with a great number of different brands as a “silent partner,” supplying parts or even finished products, labeled with the customer brand’s name. Given that the owner of Valgine, Dominique Guenat, is also a long-time friend of Richard’s, it comes as no surprise that Valgine is an important shareholder and supplier for the brand, so much so that the Valgine logo is seen at several places around the Richard Mille premises.

A lesser known fact is that another shareholder in the brand is Audemars Piguet, whose high-end watch making division, called Audemars Piguet Renaud et Papi (APR&P) is responsible for the realization of some of the most highly complicated movements of Richard Mille. On the other hand, Vaucher Manufacture Fleurier is the source of the brand’s more simple automatic and automatic chronograph movements, while ProArt (part of the Richard Mille Group) crafts all Richard Mille cases and also movement baseplates, bridges and other components. On our manufacture visit we first checked out ProArt, this very new and definitely ultra high-end production facility.