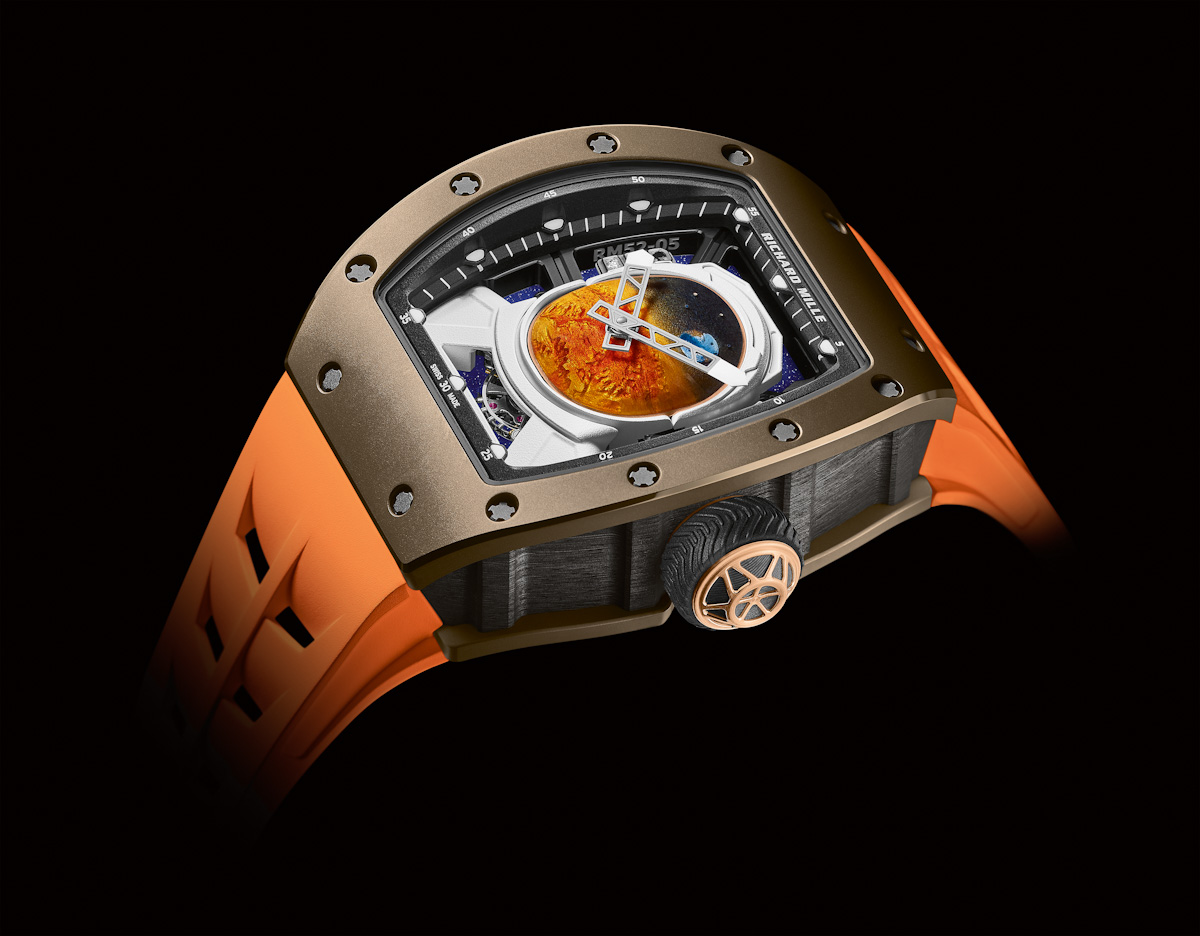 Richard Mille’s latest release, the RM 52-05 Tourbillon Pharrell Williams, is one of the most dramatic examples of the brand’s artistry in recent years. Produced in partnership with award-winning singer, songwriter, and music producer Pharrell Williams, the new piece takes inspiration from Williams’ lifelong fascination with space travel through an exquisitely detailed design based around the planet Mars. The decorative bridge covering the majority of the dial is the obvious attention-grabber, another titanium piece hand-painted in white and shaped like the helmet of an astronaut. Even more impressive, the topography of the Martian landscape is accurate, depicting the Mariner Valley where the first-ever Mars probe touched down. 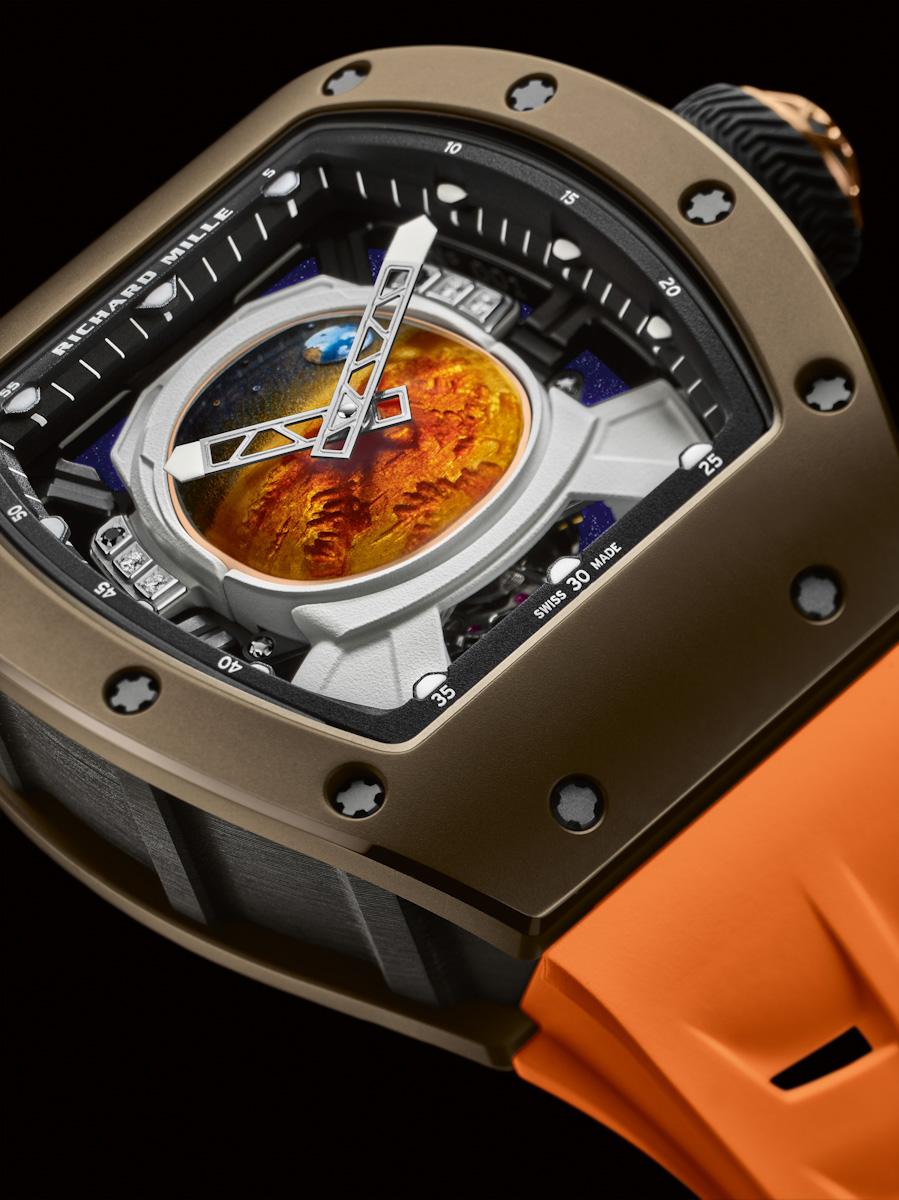 Richard Mille’s signature 42.35-millimeter tonneau-style case design is the basis for the RM 52-05 Tourbillon Pharrell Williams, with its blocky overall shape and hex screws surrounding the bezel, but the details of the case are what begin to set this piece apart. The bezel and caseback are made from metallic brown Cermet, an advanced hybrid of titanium and ceramic materials, while the inner sandwiched layer is comprised of carbon TPT, a layered carbon fiber material that has seen extensive use in aerospace. Furthering the spacefaring theme is the crown, with an intricate design that mimics the wheel of a Mars rover. 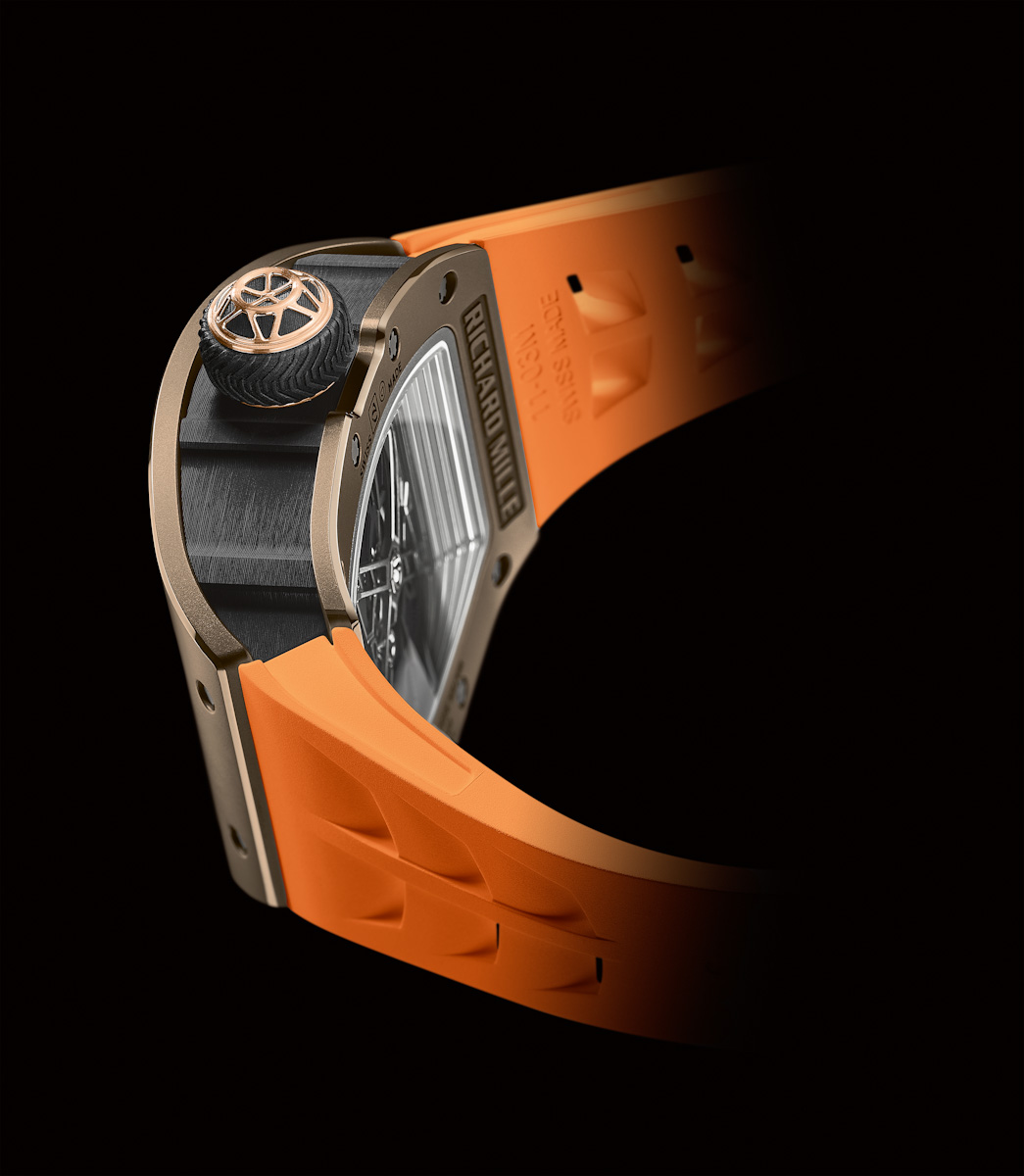 Like many Richard Mille releases, the RM 52-05 Tourbillon Pharrell Williams features a skeleton dial design, but it’s cleverly hidden by layers of decoration. The main movement plate and bridges are forged from Grade 5 titanium and decorated with slabs of finished aventurine, giving the appearance of a field of stars on the deep blue backdrop of space. 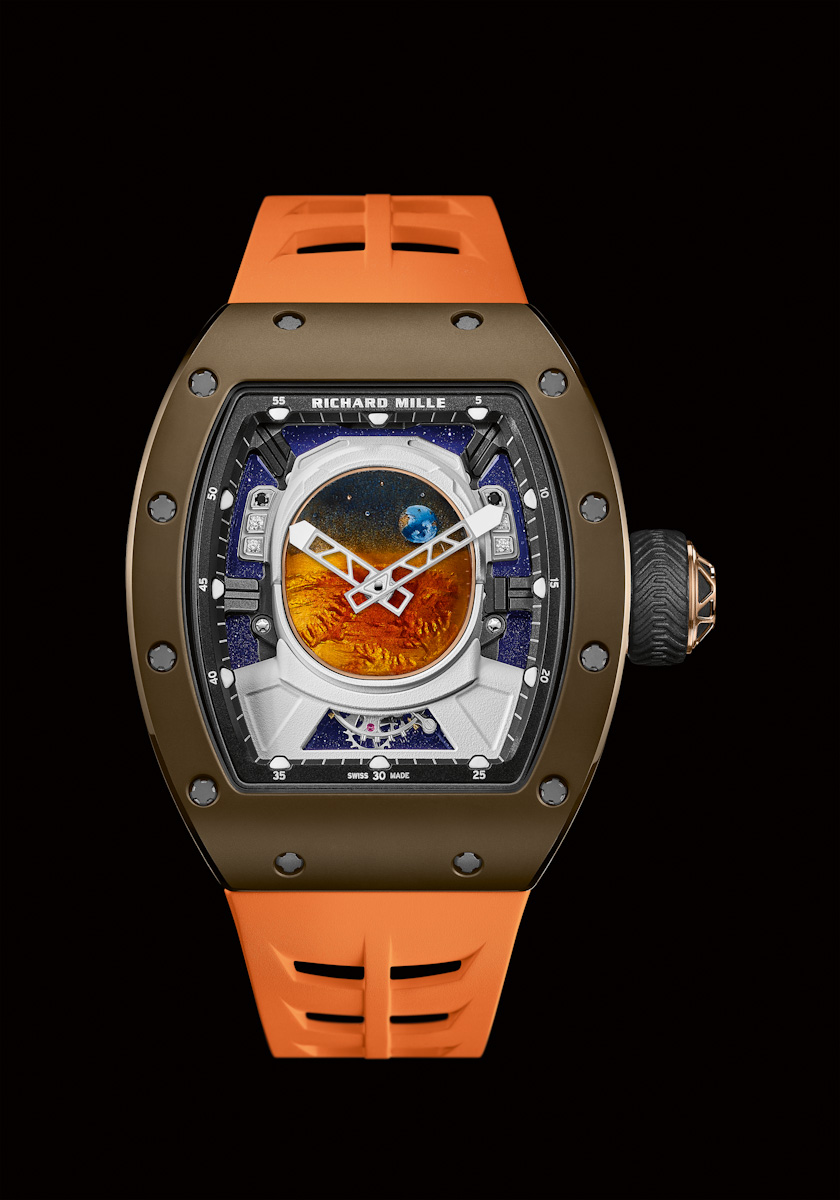 On the sides of the helmet, at 2 o’clock and 10 o’clock, there are two inlaid black sapphires and four inlaid diamonds to create the helmet cameras and floodlights. The visor of this decorative helmet displays a view of the surface of Mars with Earth in the background. The visor is made from a single piece of red gold, hand-engraved in a process of 15 hours then grand-feu enameled and hand-painted by artisan Pierre-Alain Lozeron over 24 hours of intensive work. The resulting finish, with its multiple gradients, required substantial changes to the traditional grand-feu enameling process, taking the art form to its technical extreme.  Overlaid on this incredibly executed bridge is a set of intricately designed and space-inspired ladder hands. 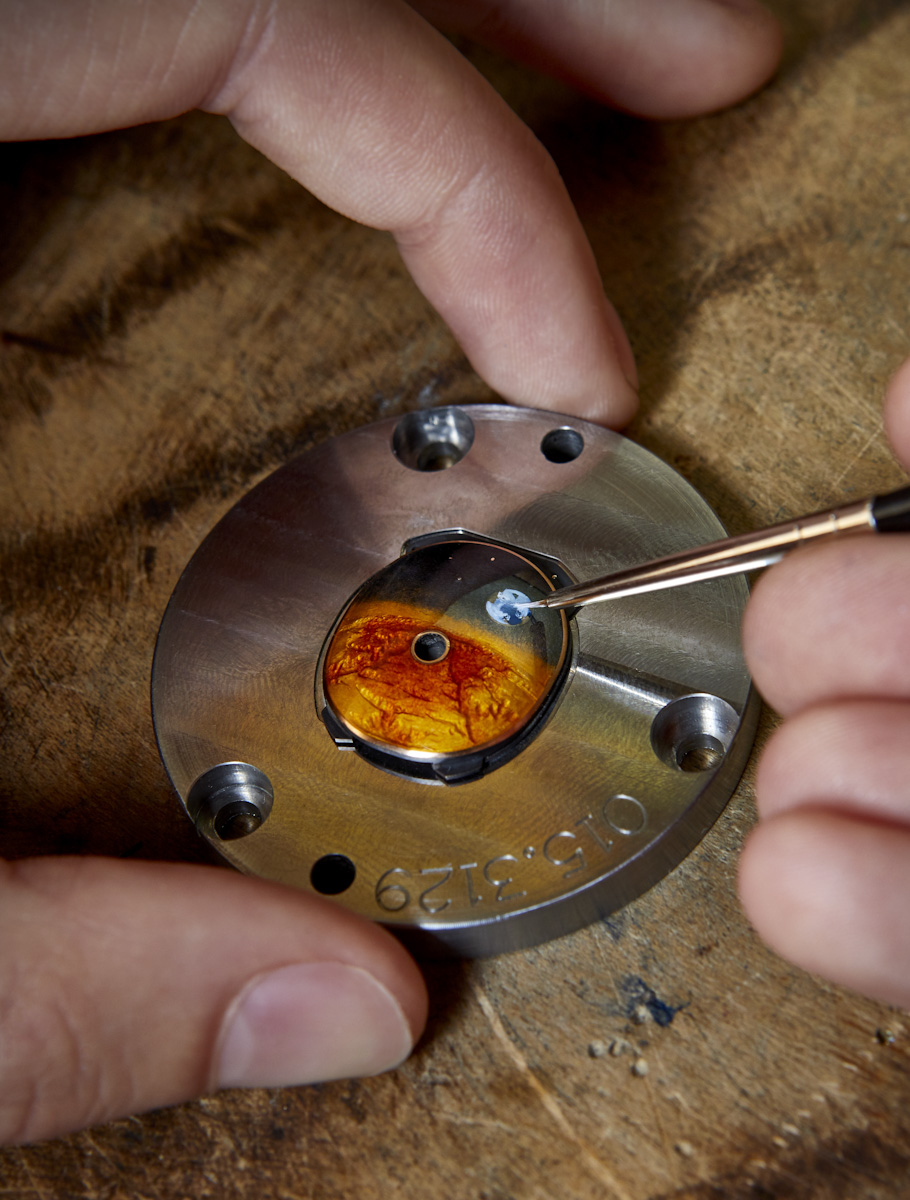 While the incredible artistry of the decorative bridge dominates the view of the dial, the tourbillon escapement itself is rather tucked away, only half emerging out from underneath. The intricate complication still receives a prominent position at 6 o’clock but is not made the focus of attention as in many tourbillon-equipped designs. 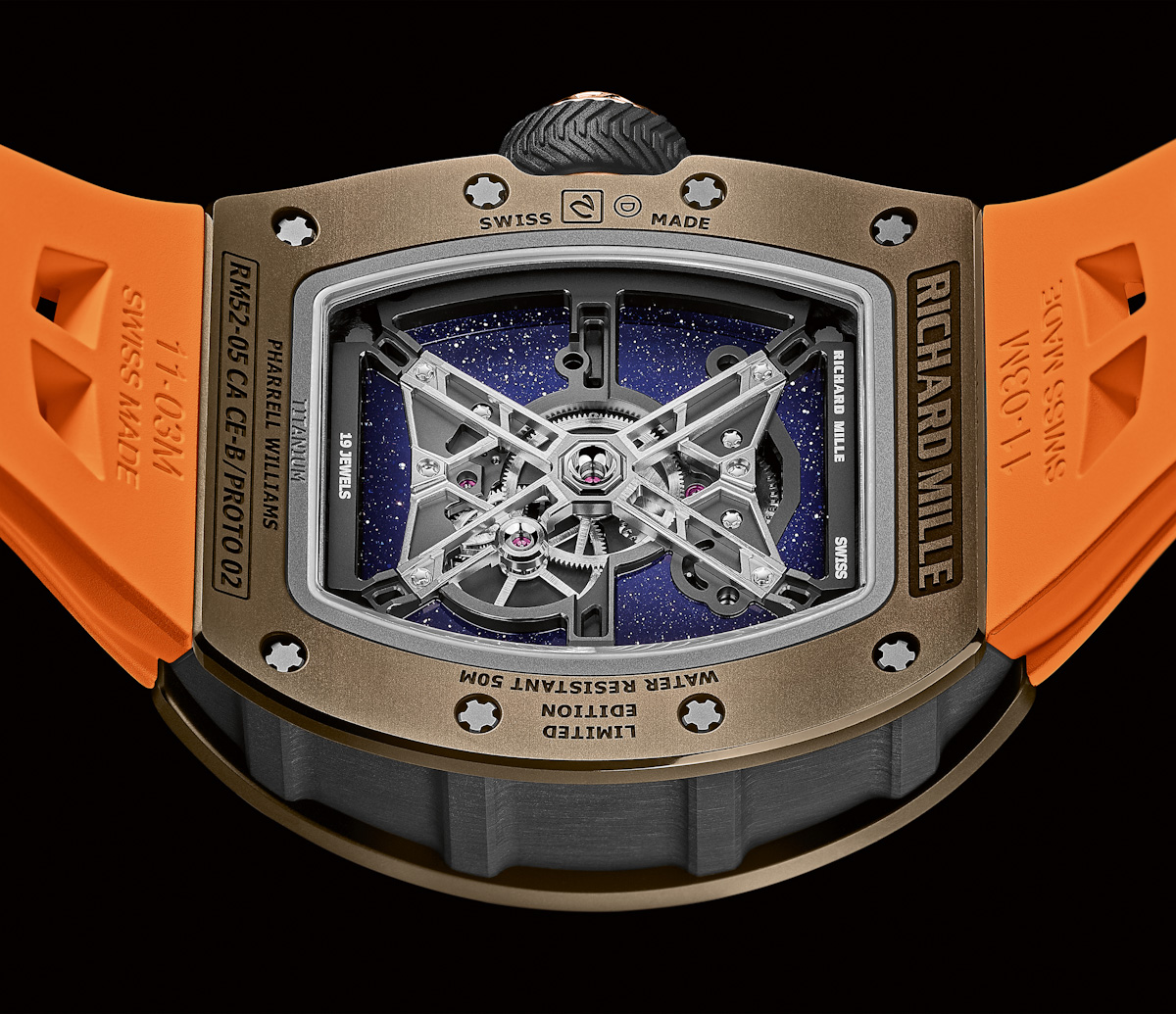 While the artistry of the dial is immediately striking at first glance, the craft and technical expertise of the movement in the RM 52-05 Tourbillon Pharrell Williams is equally impressive. The manually wound Caliber RM 52-05 movement includes a free-sprung balance with variable inertia, a faster rotating barrel for increased accuracy, a barrel pawl with progressive recoil, pinion and winding barrel teeth with a central involute profile, and spline screws forged from grade 5 titanium. This high-tech approach allows for incredible accuracy, coupled with a 42-hour power reserve.

With only 30 watches produced, the RM 52-05 Tourbillon Pharrell Williams will only make it in the hands of a few collectors. With its advancements in craftsmanship, technology, and design, the watch also commands an equally astronomical price with a recommended retail value of $969,000, available now on the brand’s website. 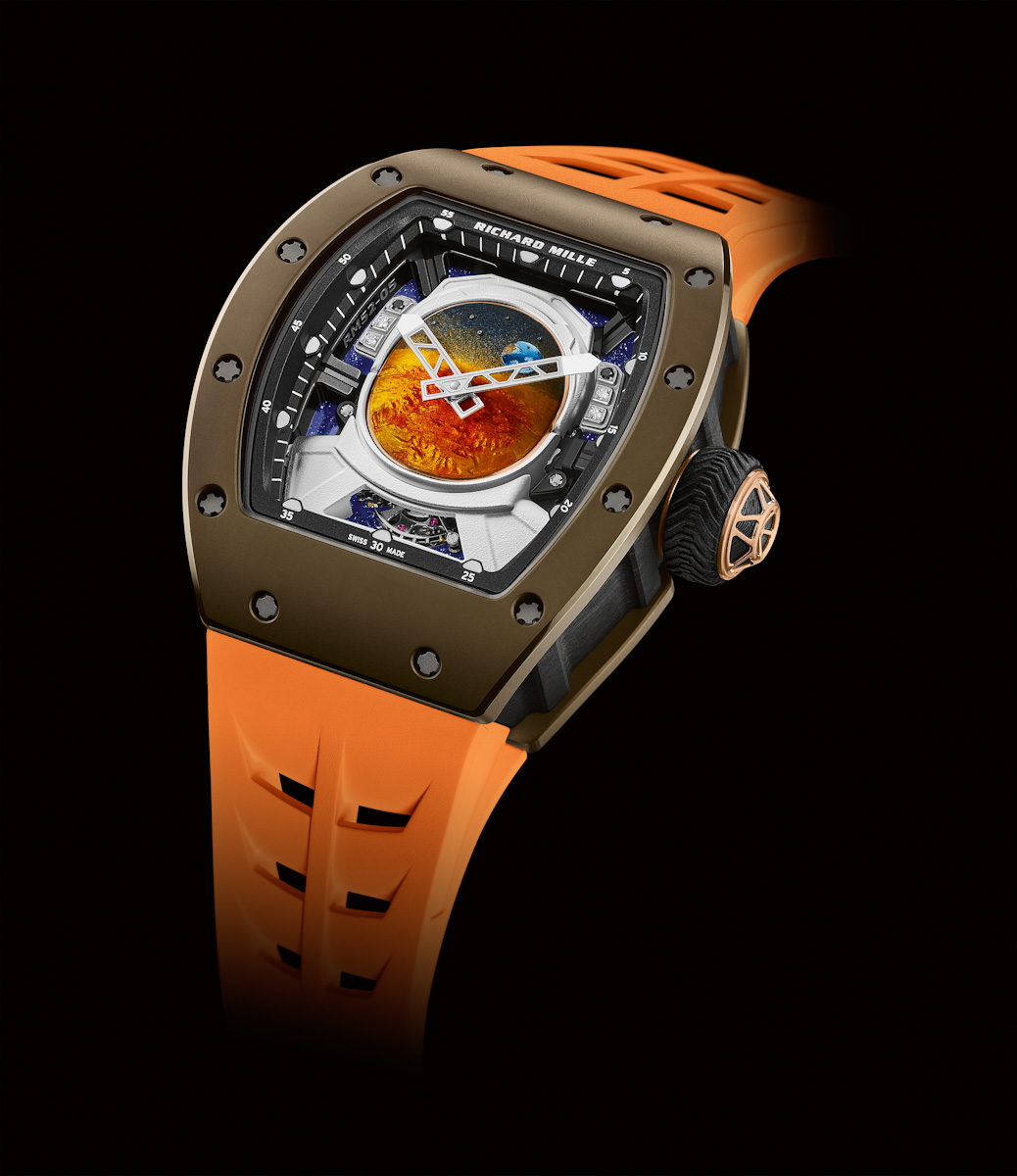 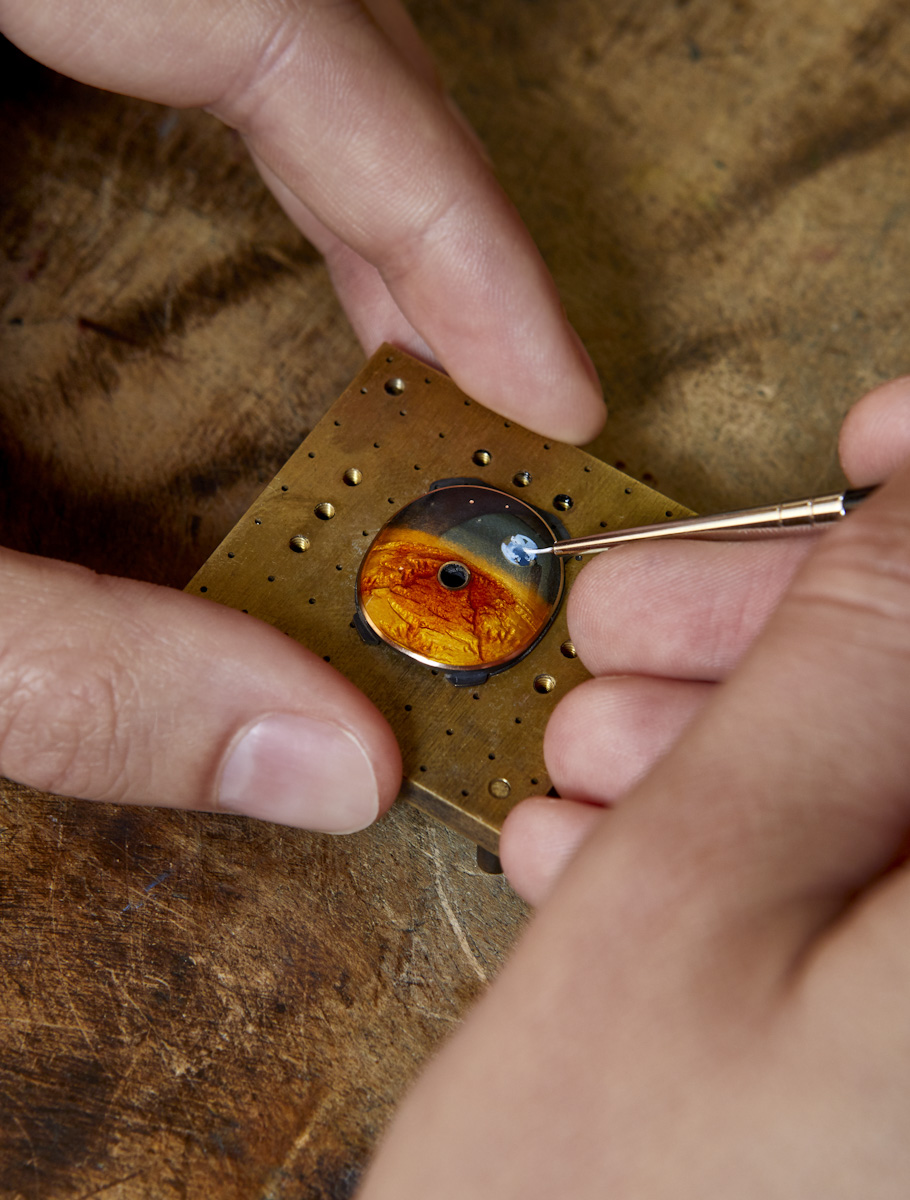