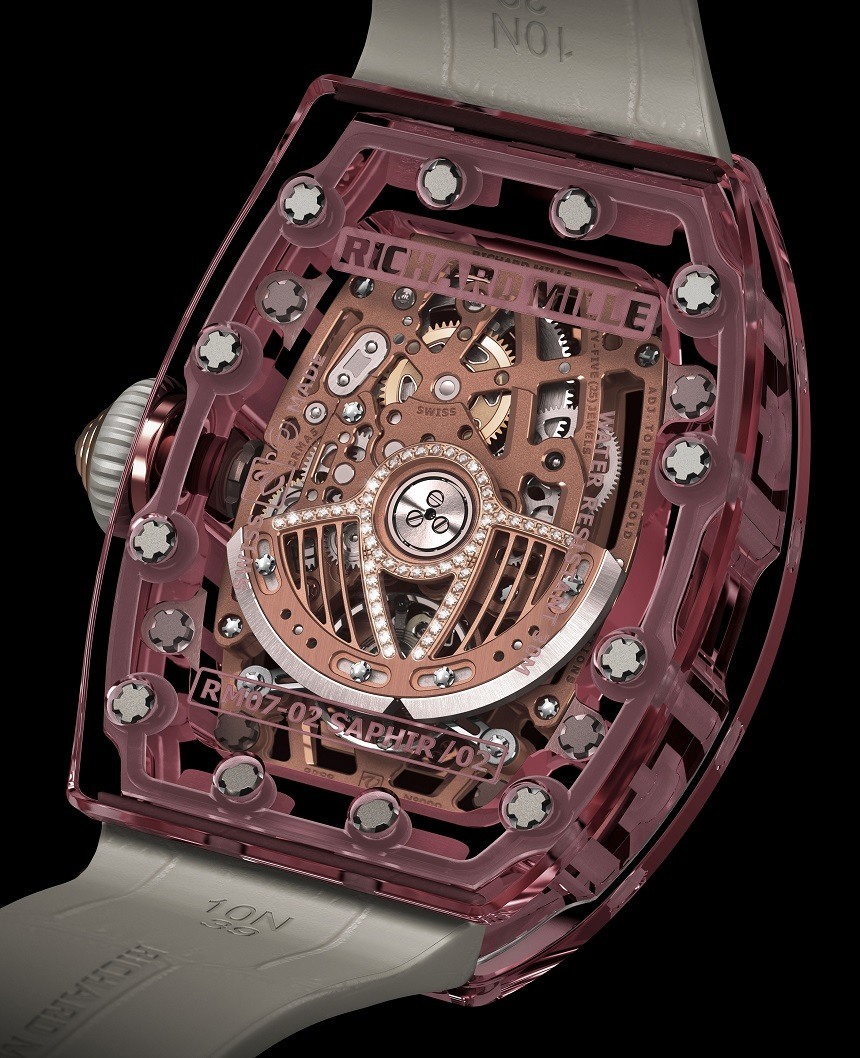 Richard Mille, the flamboyant, château-dwelling Frenchman, is never short of a trick or two. With the embellishing release of the Richard Mille RM 07-02 Pink Lady Sapphire Automatic watch, the brand looks to narrow the gender divide that exists in the industry’s clientèle. This is an incredibly arresting piece thanks to the pink sapphire case. It may not be the first sapphire case Richard Mille has produced, but it is the first for ladies, and one of the first truly pink watches in this echelon of horology. Richard Mille has looked to the 1930s for inspiration. In that decade, the role of women in society was becoming ever more prominent, and opportunities for high-born socialites were more plentiful than ever before. In an effort to feminise the openly chauvinistic club scene of the times, the Pink Lady cocktail was introduced. Serving the drink was tantamount to rolling-out the welcome mat to the fairer sex. It is the intention of Richard Mille to invite a wider selection of modern women to engage with his wares by releasing a watch designed to appeal to them and them alone. Pink is an interesting colour. It wasn’t always associated with women. In fact, prior to World War I, pink was considered a masculine colour; conversely, blue was seen as more feminine and pure, in reference to the colour of the Virgin Mary’s robes. It was around the time of the Pink Lady’s emergence that gender binary was taking off – advertisers informed the following generations of how their children should be dressed, and a lot of people have stuck to that formula ever since. It’s kind of strange to consider that an attempt to include women in the high-end watch market should lean on an arguably out-dated stereotype that girls like pink, but the design comes from a good place. Richard Mille are clearly keen on being seen to be dedicated to their female following. It is great to see a brand of this renown building women’s watches from the ground up, rather than lazily modifying a gents’ design, and papering over the cracks with slick marketing. This is real watchmaking: The case of the Richard Mille RM 07-02 Pink Lady Sapphire Automatic watch is incredibly tricky to make. Each of the three case elements are machined from a solid block of pink sapphire. There’s nowhere to hide with this watch – the slightest imperfection in the crystal would ruin the whole effect. It takes an astounding forty days to create one of these cases; it only takes one slip to mess it up! That certainly speaks volumes of how seriously Richard Mille is taking the industry-wide responsibility to open the doors of this once-closed shop to women. So what have Richard Mille deemed worthy to occupy a case that takes forty days to manufacture? The Calibre CRMA5 is a skeletonised, self-winding, two-handed movement with a variable-geometry rotor. This is a haute joaillerie movement: The microblasted, hand-bevelled baseplate and bridges are coated in 18ct 5N red gold; the bridges and rotor weight are heavily gem-set with hundreds of diamonds. The CRMA5 utilises a free-sprung balance with variable inertia screws to achieve and maintain an excellent level of timekeeping accuracy. You may not be familiar with the function of a variable-geometry rotor. Simply put, the rotor weight can be adjusted to suit the wearer’s activity level. This is achieved by moving two sliding weights that sit on the outer rim of the rotor. The weights can be moved apart or closer together and fixed in place with tiny screws. When they are set far apart, the rotor’s inertia is considerably reduced, meaning the rotor will spin slower and wind the mainspring at a more conservative rate. If, however, the weights are placed close together, the inertia of the rotor weight is increased and it will spin very quickly. This would be suitable if the activity level of the wearer were low (if, for example, the wearer had a desk job, or drove long distances for a living). It’s a cute idea to be able to tune a movement to the habits of its wearer. The gains are debatable, but in theory, it optimises the performance of the watch, while avoiding placing unnecessary stress on components. In addition to this neat winding modification, the barrel is of the “fast rotating” variety. The idea behind this is to stabilise the amplitude of the balance wheel throughout the unwinding process of the mainspring. With an automatic watch, especially one fitted with a variable-geometary rotor weight, this shouldn’t be too much of an issue anyway, but it’s another step taken by Richard Mille, along with the modification of all gear train tooth profiles to a 20° pressure angle, to reduce friction within the movement and increase overall isochronism. The movement measures 29.9 x 22.00mm, and nicely fills the case, which comes in at a wearable 46.75 x 32.90 x 14.35mm. The case is held together with titanium screws and has a hardness of 1,800 Vickers. At under just 33mm across, this is about as dainty a watch as you’ll find in the Richard Mille catalogue and all the better for it. The men’s watches that feature full sapphire cases are a little too ostentatious for most tastes, but at this size, the Richard Mille RM 07-02 Pink Lady Sapphire Automatic watch is a much more manageable and discreet size. The movement has a 50-hour power reserve (+/-10%), a high-beat operating speed of 28,800vph, 25 jewels, and a jewelled escape wheel to reduce friction and stabilise timekeeping potential. In addition to its technical merits, the calibre CRMA5 has a variety of high-end surface finishes including hand-polished bevelling, microblasted milled sections, hand-polished sinks, drawn edges, satin finished surfaces, burnished pivots, diamond chamfering on the wheels, and polished post faces to name a selection. All in all, the Richard Mille RM 07-02 Pink Lady Sapphire Automatic watch is a very impressive piece. It may remind you of an Facehugger Alien (those luminous hour markers look a little like teeth to me…), but it’s had the works thrown at it and come out the other end a slightly manic masterpiece. It certainly won’t be for everyone, but it will no doubt find favour with a well-heeled portion of Richard Mille’s loyal customer base. The Richard Mille RM 07-02 Pink Lady Sapphire Automatic watch has a price of just around $956,000. richardmille.com