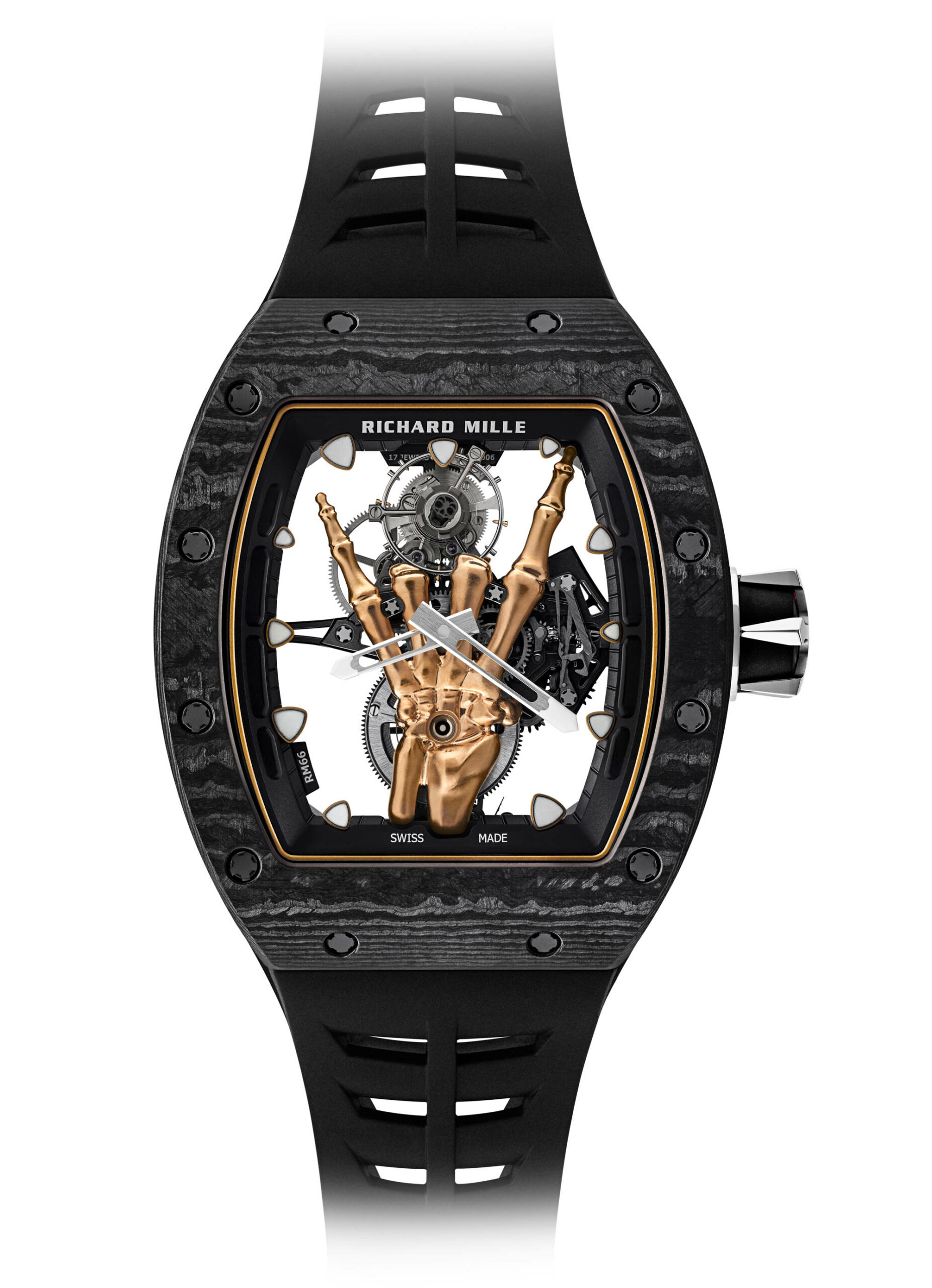 There are few companies that approach high-end watchmaking with the same fun and playful irreverence as Richard Mille. Everything the brand produces is executed to incredibly high standards, yet many of its designs have a certain lighthearted nature to them, even when they are ultimately rather serious timepieces. If Richard Mille watches were of lesser quality and priced within the realm of possibility for most people, there would likely be some who would consider them to be horological novelties. However, it’s ultimately hard to call a watch a mere “novelty” when it features heavy-hitter complications, state-of-the-art materials, and costs as much as a very nice house in many parts of the U.S. Continuing this theme of bold and slightly irreverent designs carried out at the highest possible levels is the latest release from Richard Mille — the RM 66 Flying Tourbillon, which is a 50-piece limited edition that represents the brand’s tribute to the world of rock and roll music. 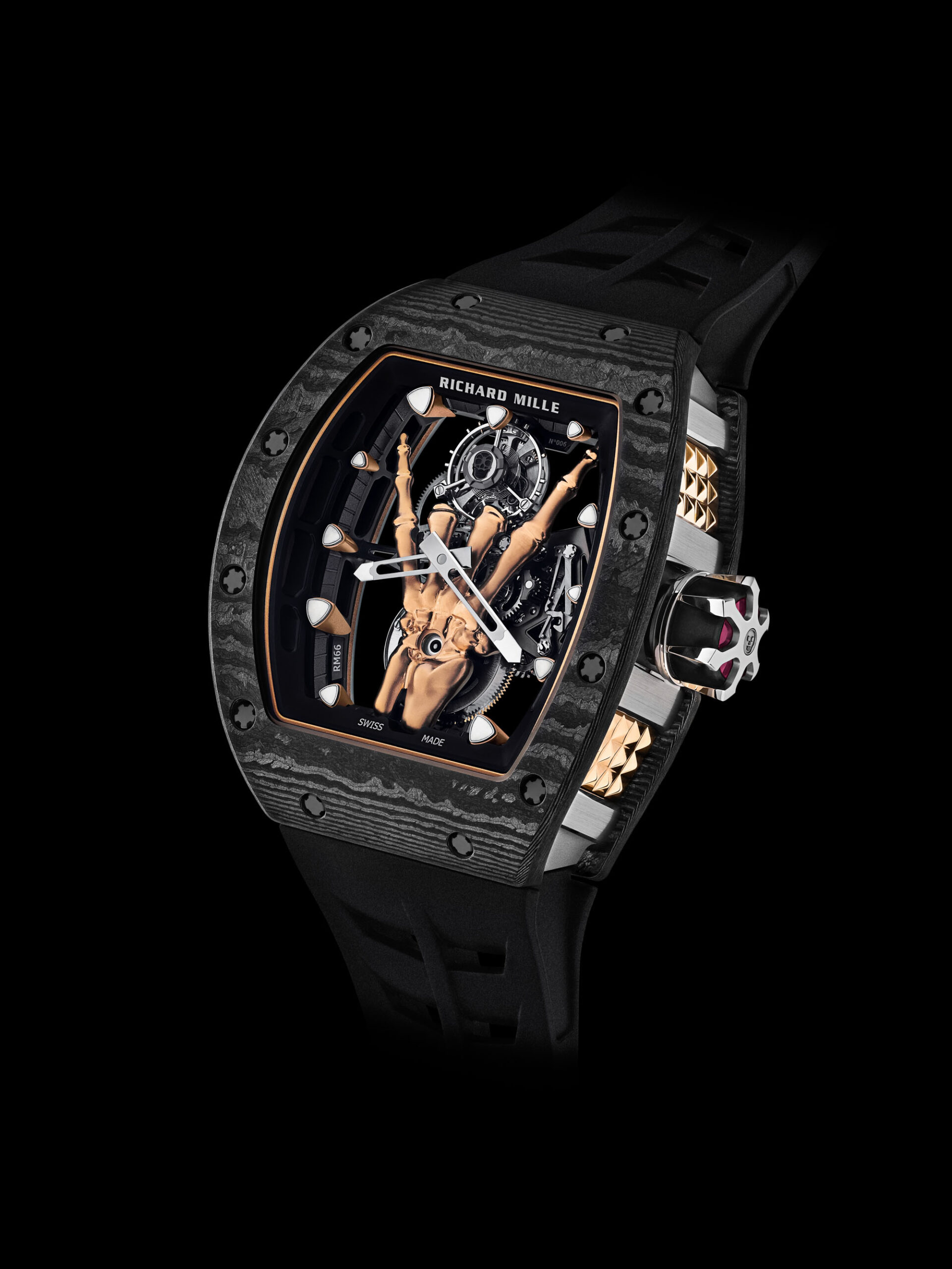 The case of the Richard Mille RM 66 Flying Tourbillon follows the same multi-component curved tonneau design that defines the vast majority of the brand’s other models, and it measures 42.7mm-wide by 49.94mm lug-to-lug, with an overall thickness of 16.15mm. The bezel and caseback are crafted from black Carbon TPT, while the middle caseband is made from grade 5 titanium and features brushed pillars with polished bevels. 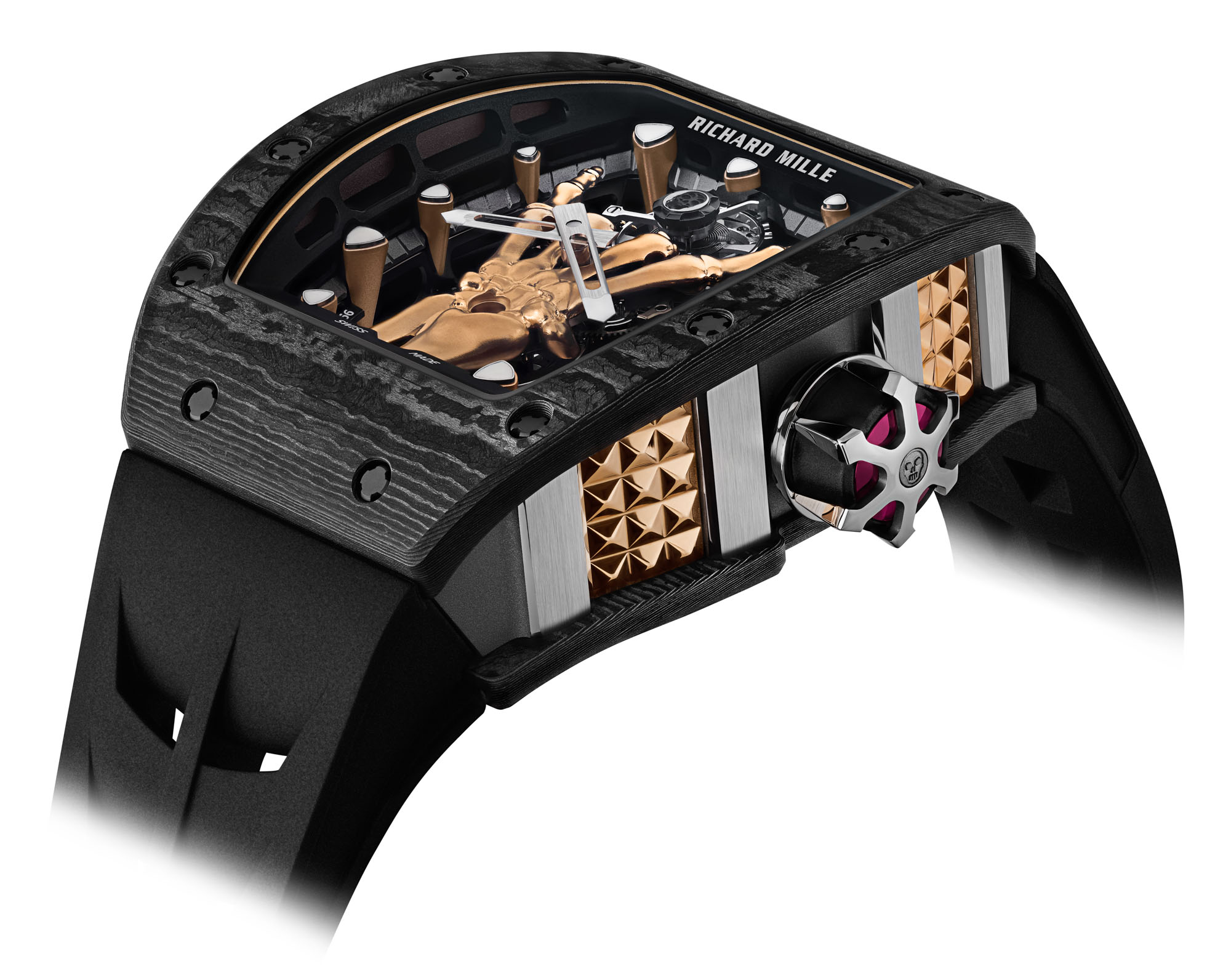 Set into the center titanium caseband are 5N red gold inserts, which have been given a prominent “clous de Paris” pattern that is intended to be reminiscent of the studs on punk belts. Curved sapphire crystals with anti-glare treatment are fitted to both the dial side of the watch and its caseback, while the case itself is held together with 20 titanium spline screws and features two Nitrile gaskets that help create 50 meters of water resistance. 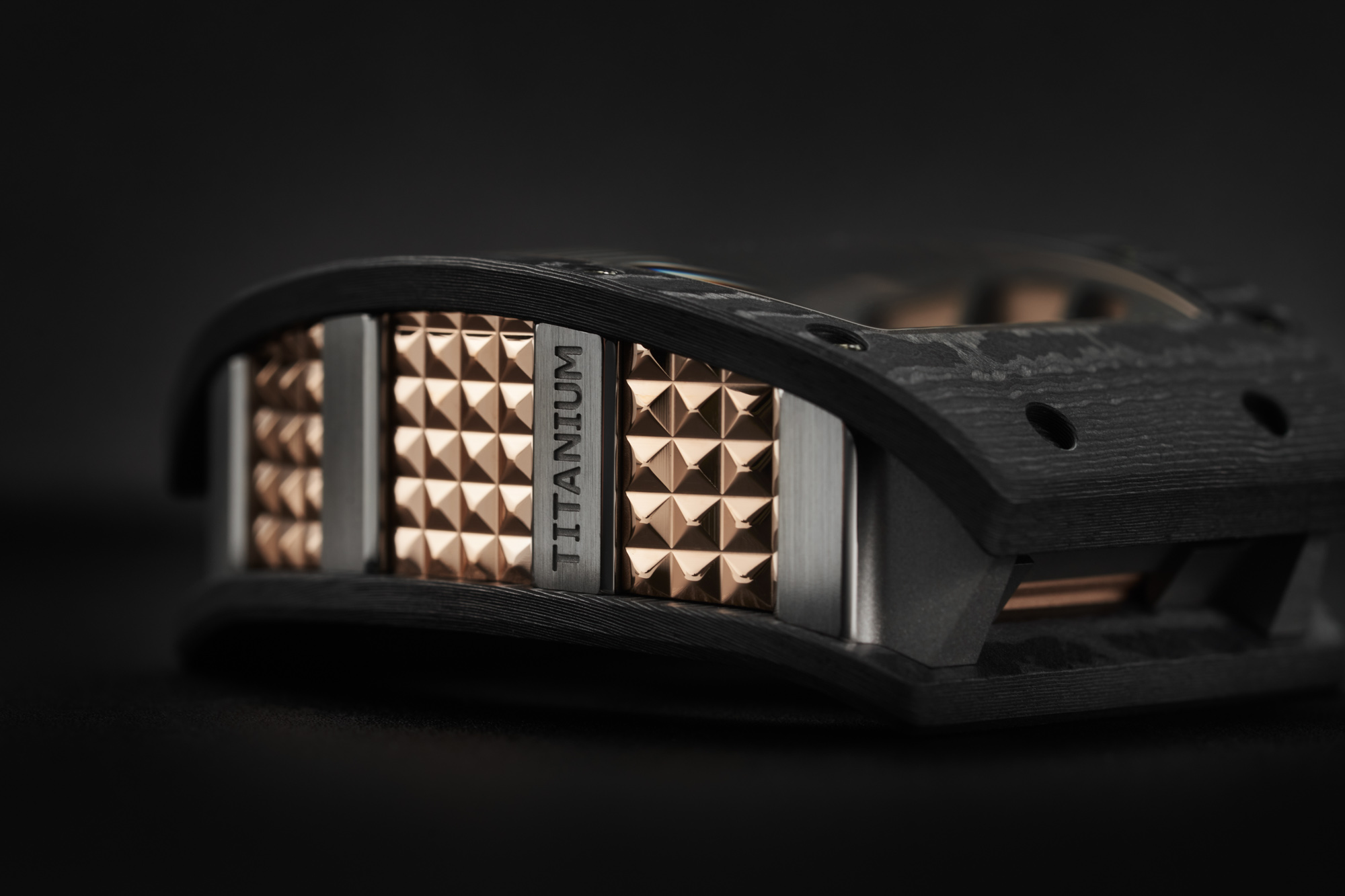 At the 3 o’clock location is a rather ornately designed torque-limiting winding crown that automatically disengages when the tension in the mainspring barrel reaches an optimal level. Since the Richard Mille RM 66 Flying Tourbillon is powered by a manually wound movement, this innovative feature eliminates the possibility of accidental overwinding and prevents wear and damage to both the stem and mainspring. 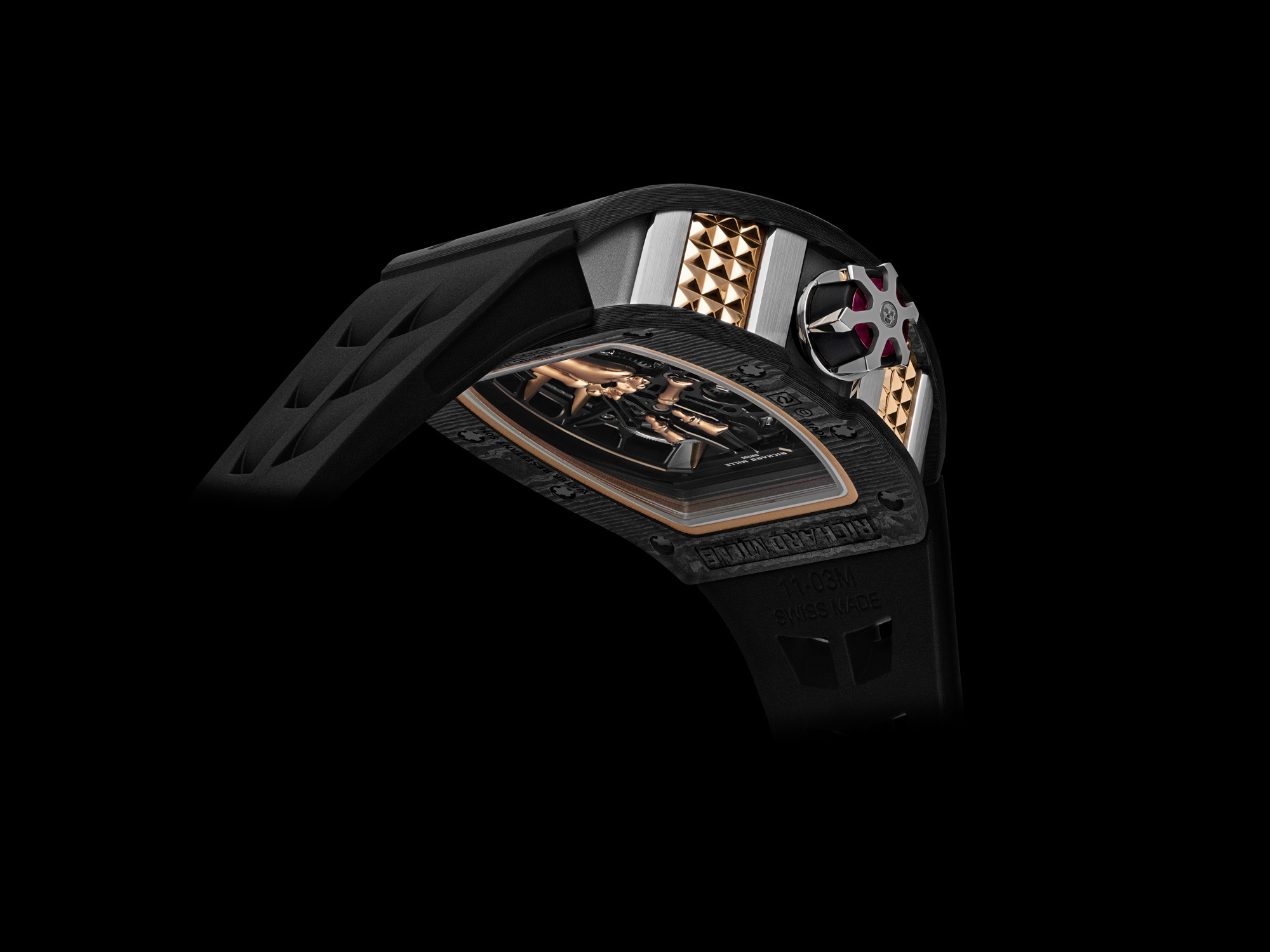 The crown itself is constructed from polished grade 5 titanium, and it is crafted in the shape of a spider, with its legs surrounding a black rubber collar and synthetic red ruby. The tip of the crown gets finished with a small skull insignia as a subtle nod to the RM 052 Tourbillon Skull watch, and due to its intricate structure, machining and finishing just one of these spider-shaped winding crowns takes a full 12 hours to properly complete. 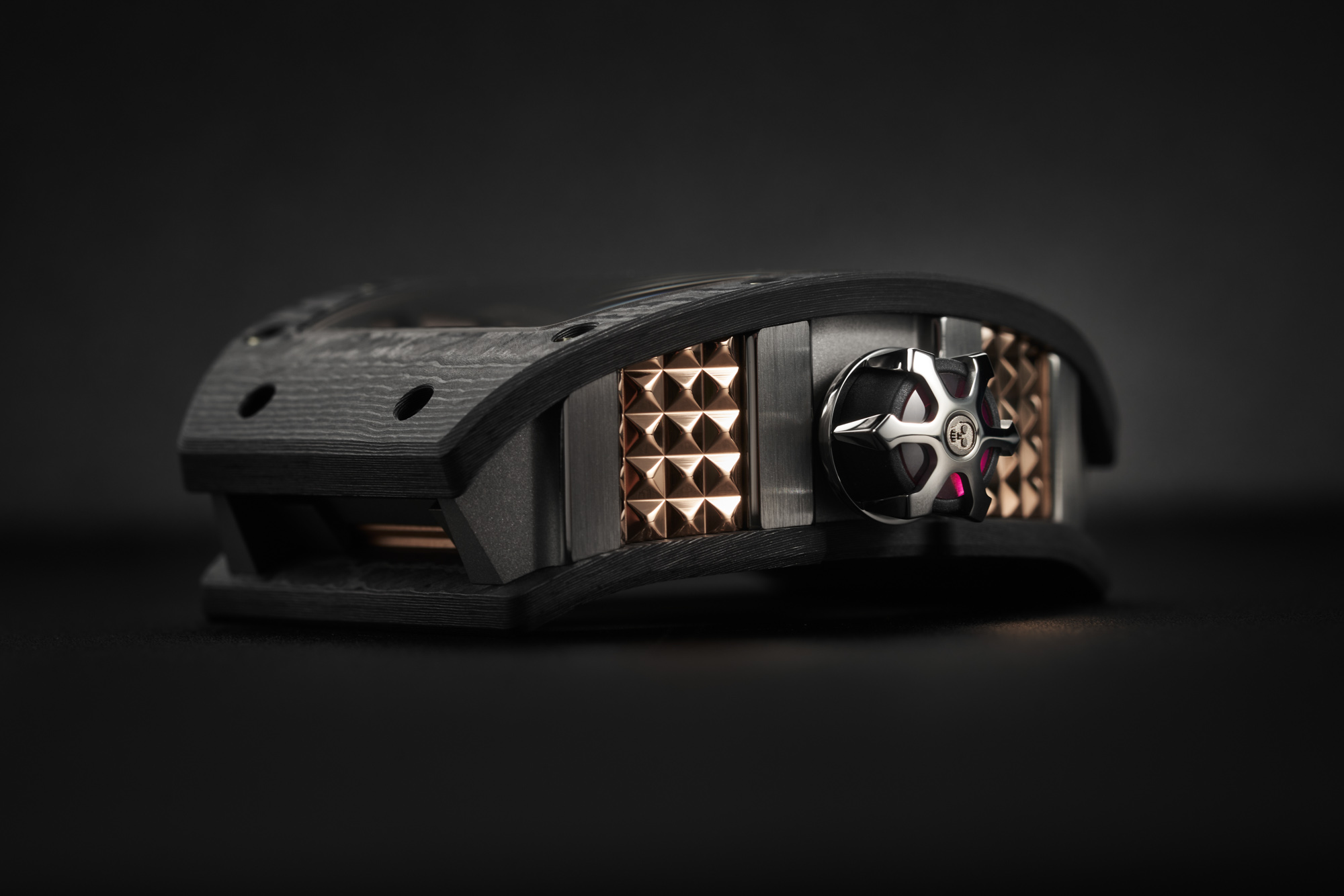 Like most Richard Mille watches, the new RM 66 Flying Tourbillon features a largely open-worked aesthetic. However, rather than simply showcasing its movement, the entire internal design is based around an intricate rose gold sculpture. Sitting front and center inside the watch is a human skeleton hand that is crafted from 5N red gold, with its index and pinky fingers outstretched to form the popular rock and roll “horns” hand gesture. 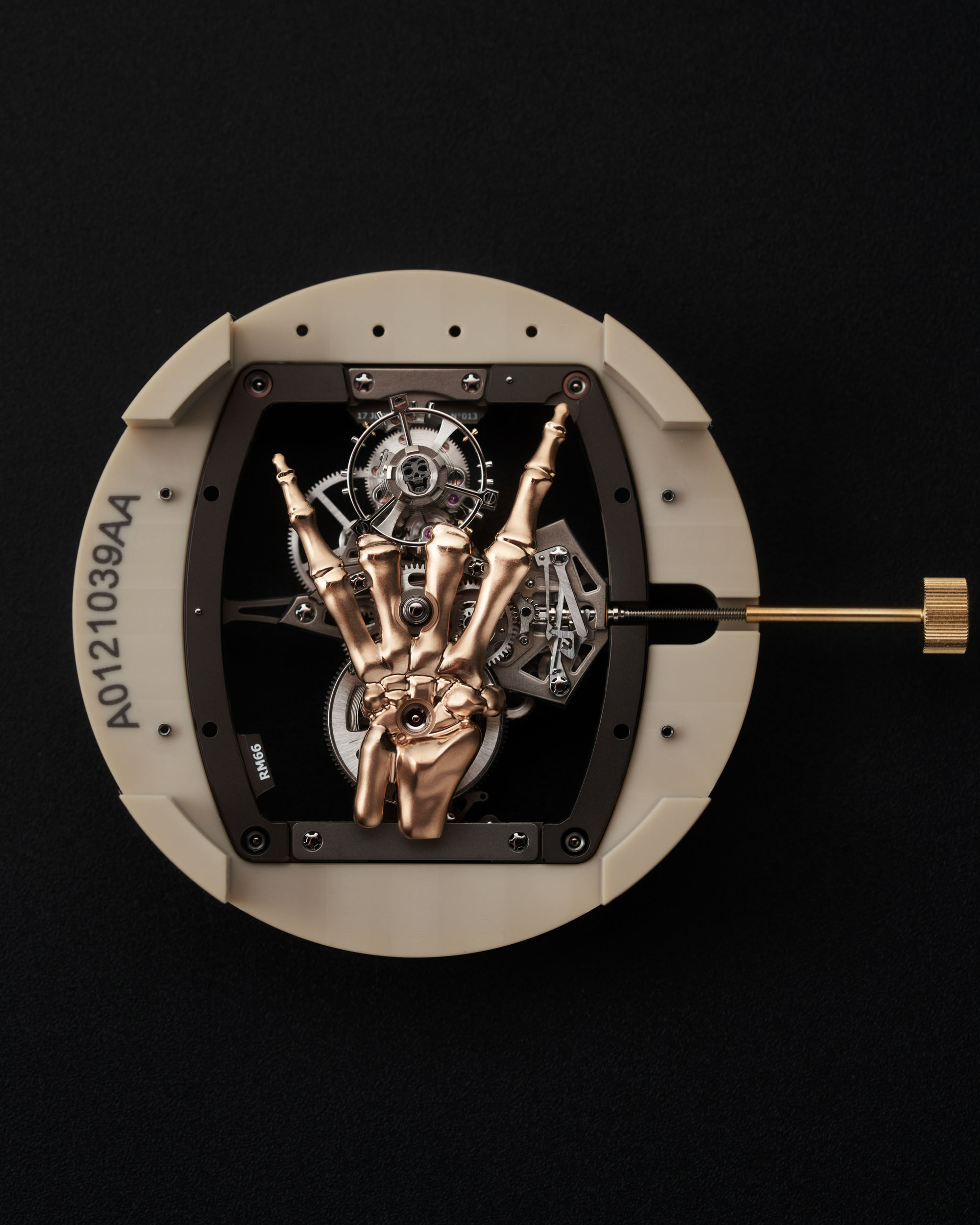 The three-dimensional skeleton hand essentially holds the components of the internal movement, and its three non-outstretched fingers can be seen grasping the other side of the movement when viewed through its sapphire display caseback. In order to achieve their intricate shape and realistic texture, the various components of the hand are first machine milled before being handed off to master Genevan engraver Olivier Vaucher, who adds detail and finishes them by hand before giving them a micro-blasted finish. 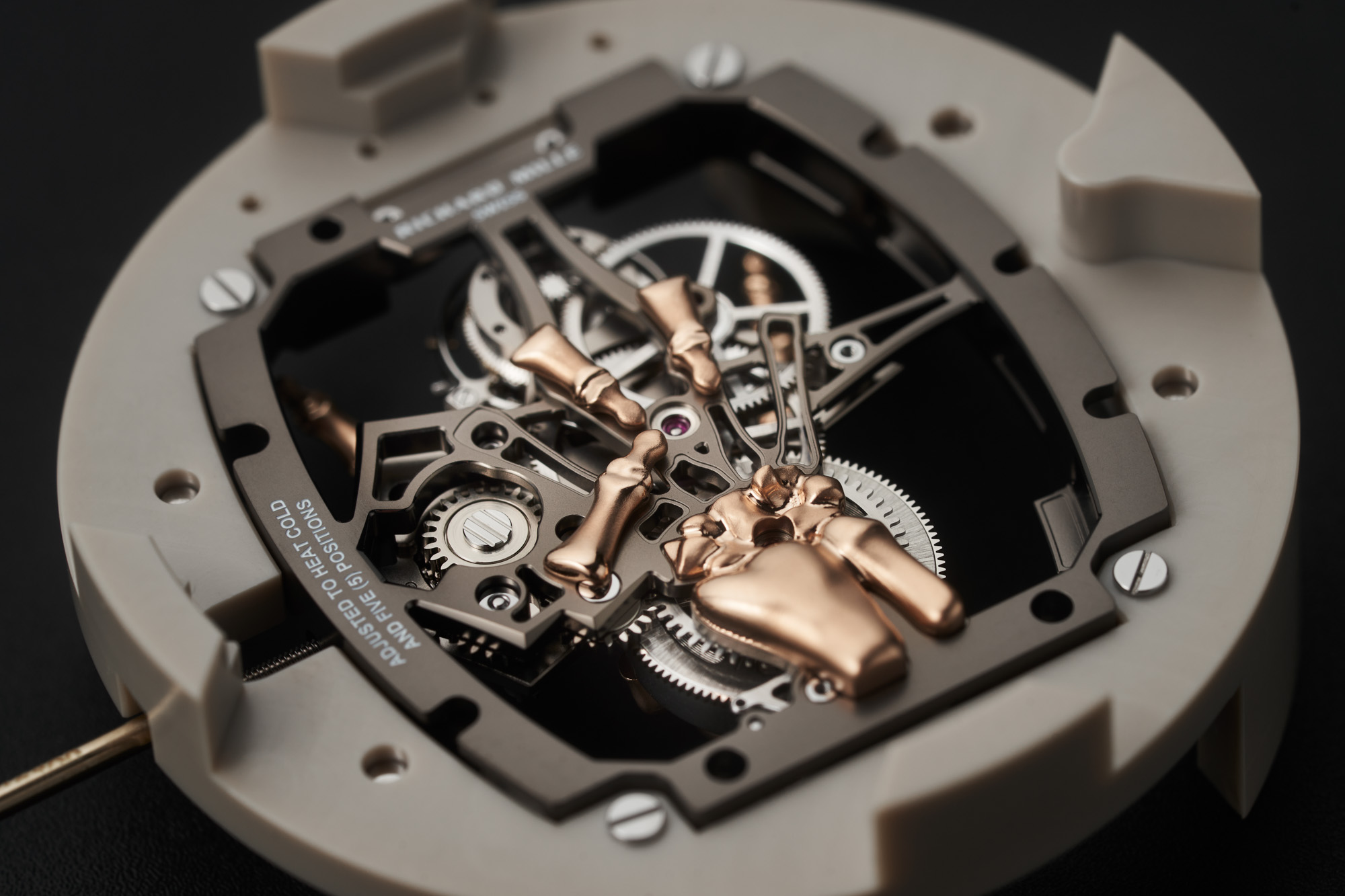 Surrounding the interior perimeter of the crystal is a rehaut made from grade 5 titanium with a black galvanic treatment, and fitted to this component are luminous hour markers that extend from it on golden lancet arches for a highly sculptural display from both the front and back side views of the watch. The hour markers themselves are finished with green-glowing lume and appear in the shape of guitar picks, while the pair of centrally mounted skeletonized baton hands also feature luminous tips for added visibility in the dark. 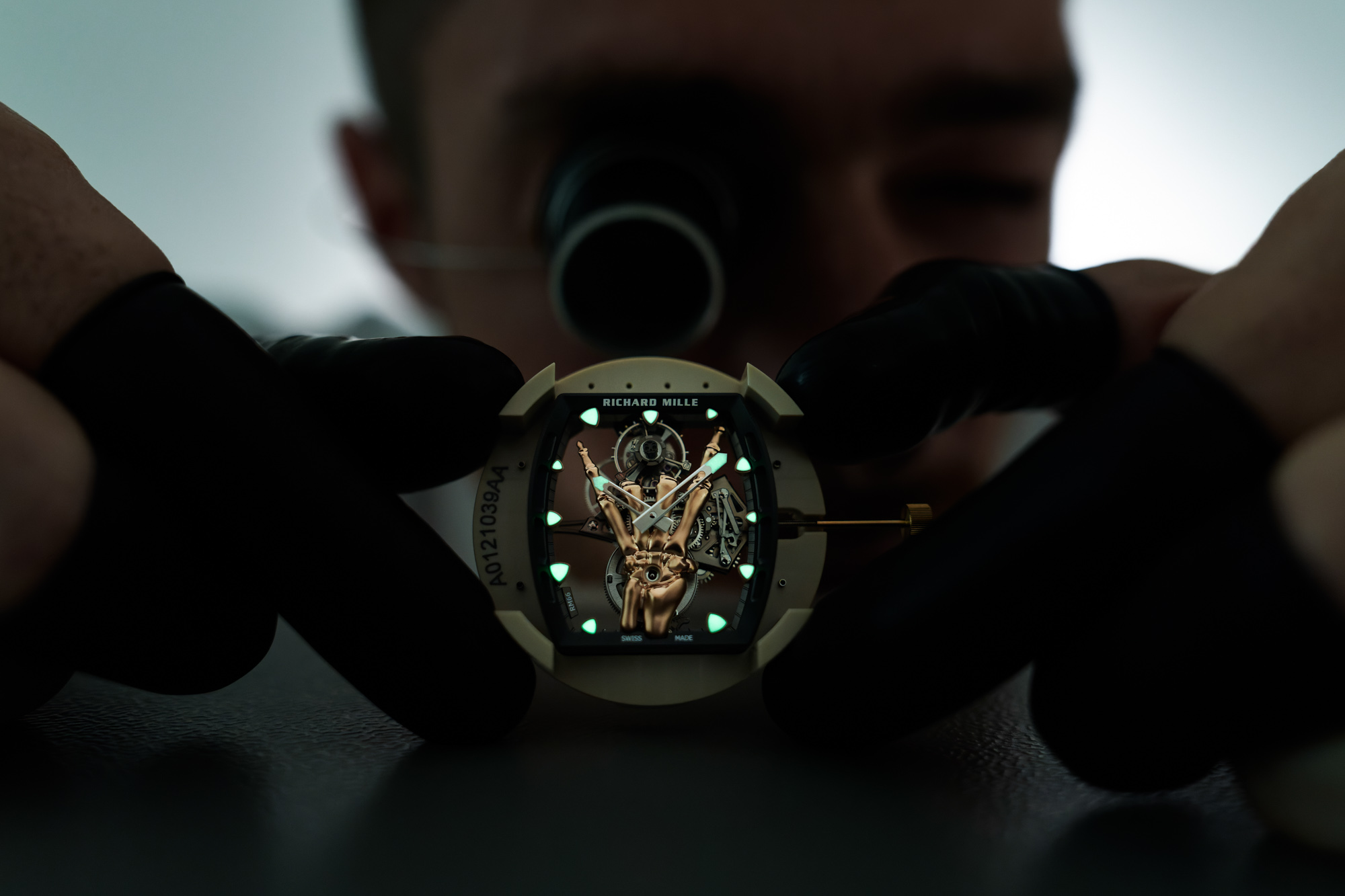 The top of the rehaut features the “Richard Mille” name in white letters, while the obligatory “Swiss Made” signature appears in its usual place at the 6 o’clock location. The only other text on the dial side of the watch is the small “RM66” badge that extends from under the rehaut between the 7 o’clock and 8 o’clock hour markers. To keep the visual emphasis on the ornate case and sculptural skeletonized display, the RM 66 Flying Tourbillon is fitted with a simple black rubber strap in Richard Mille’s signature ventilated styling. 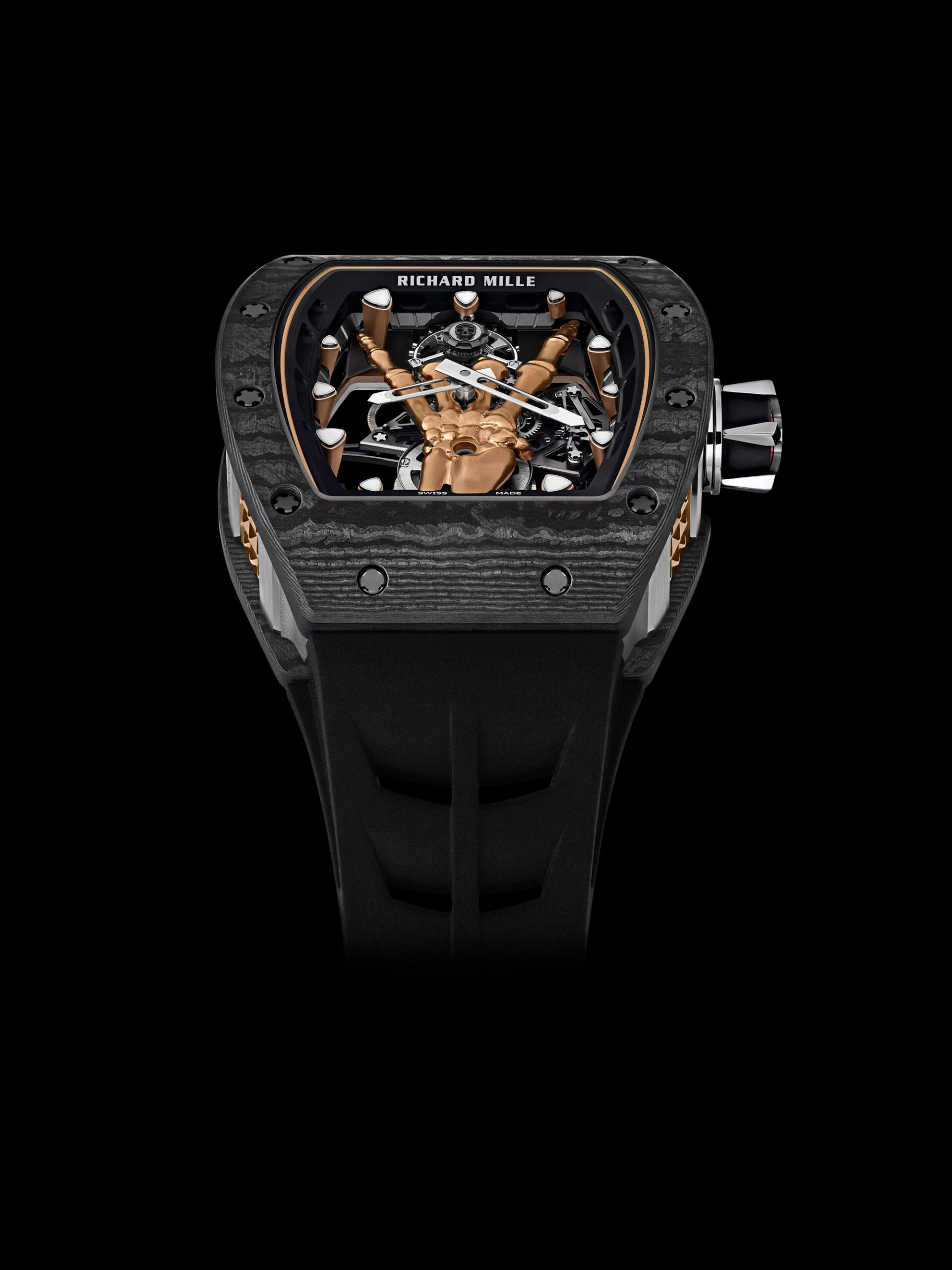 Like most skeletonized watches, the movement plays a prominent aesthetic role in the overall appearance of the Richard Mille RM 66 Flying Tourbillon. However, because the golden hand sculpture is the true focal point of the watch, the movement itself has been designed in such a manner to follow the shape of the hand and create a maximum amount of open space surrounding it. Officially known as the Caliber RM66, the manual-wind movement runs at a frequency of 21,600vph (3 Hz), while offering users a power reserve of approximately 72 hours. Additionally, the Cal. RM66 features its mainplate and bridges in grade 5 titanium, along with a fast-rotating barrel to reduce internal mainspring adhesion and create an ideal delta curve to maximize performance and regularity. 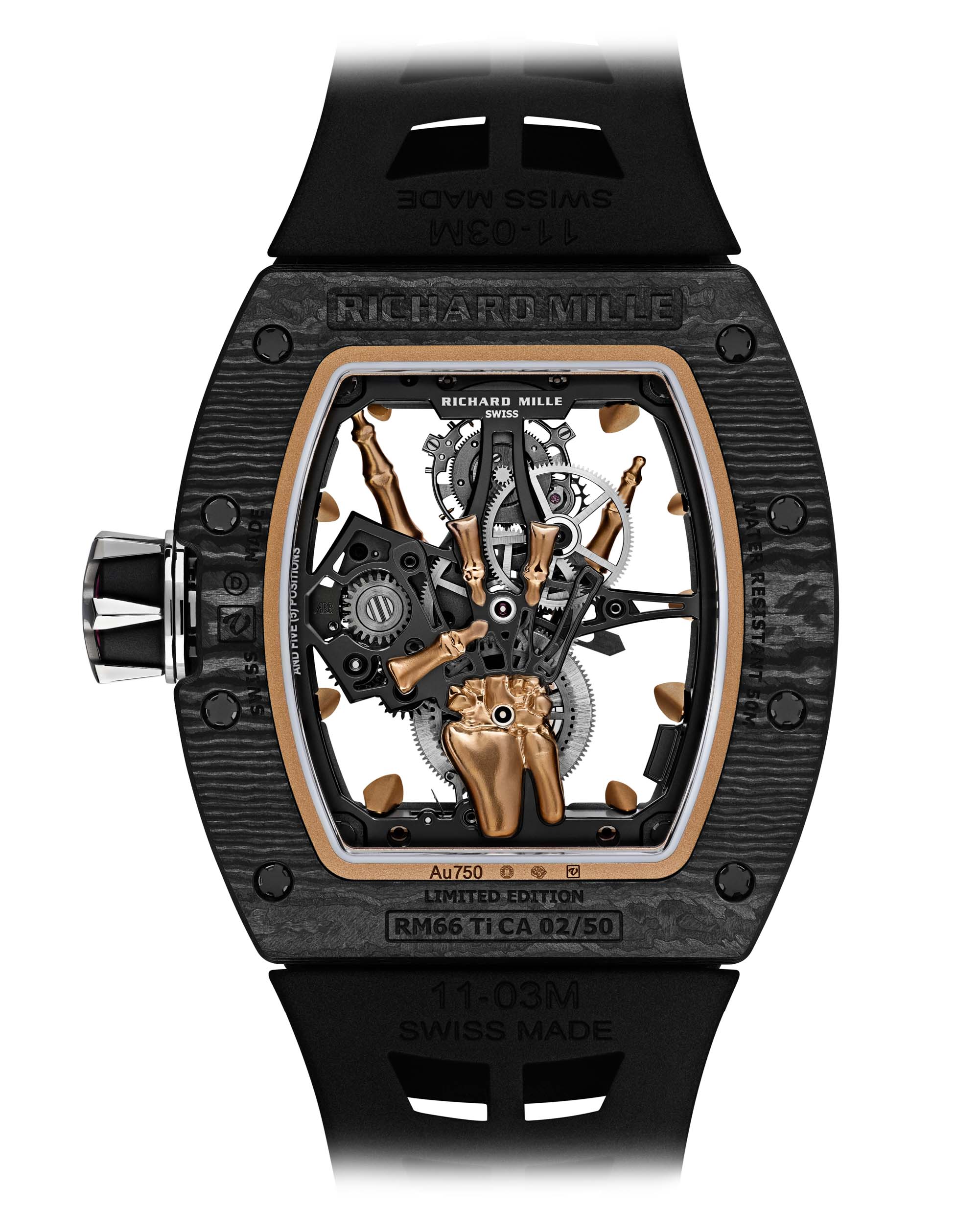 Positioned at the 12 o’clock location is a flying tourbillon with a variable inertia balance, and the new RM 66 represents the first time that Richard Mille has created a movement with this 180-degree inverted format that places its tourbillon at the top of the dial. The tourbillon cage is only fixed at one end of its axis, which eliminates the need for an upper bridge, and this gives the RM 66’s flying tourbillon the appearance of floating in space as it dances and rotates above the gold skeletonized hand that clutches the rest of the movement in its fingers. 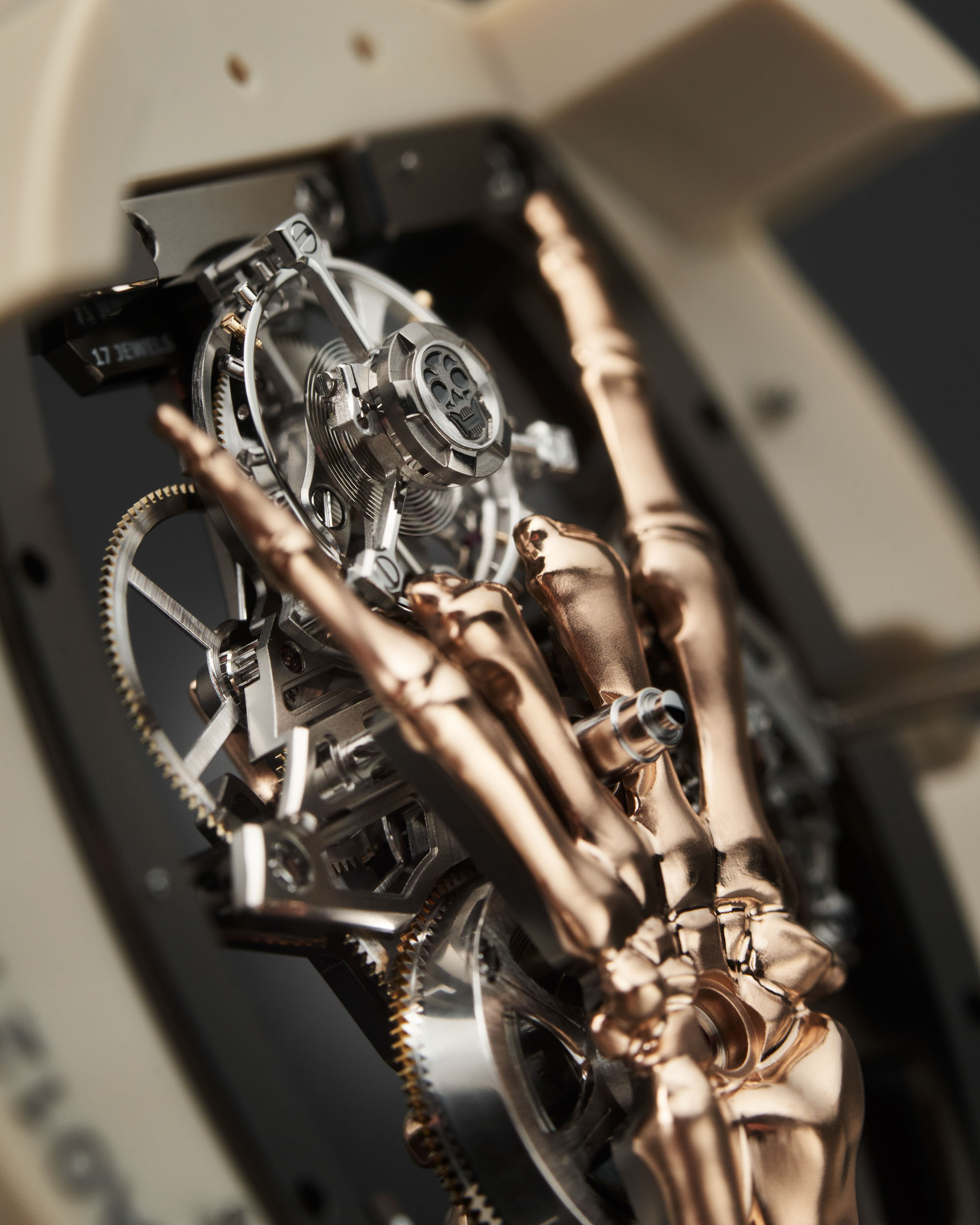 Rather than using a traditional lever regulator, the balance fitted to the Richard Mille RM 66 Flying Tourbillon incorporates a variable inertia design, which offers superior resistance to shocks and better chronometric results over extended periods of time. Lastly, completing the flying tourbillon is a small cap at the center that features the same skull insignia as the one on the winding crown for a subtle memento mori and a cohesive overall appearance. 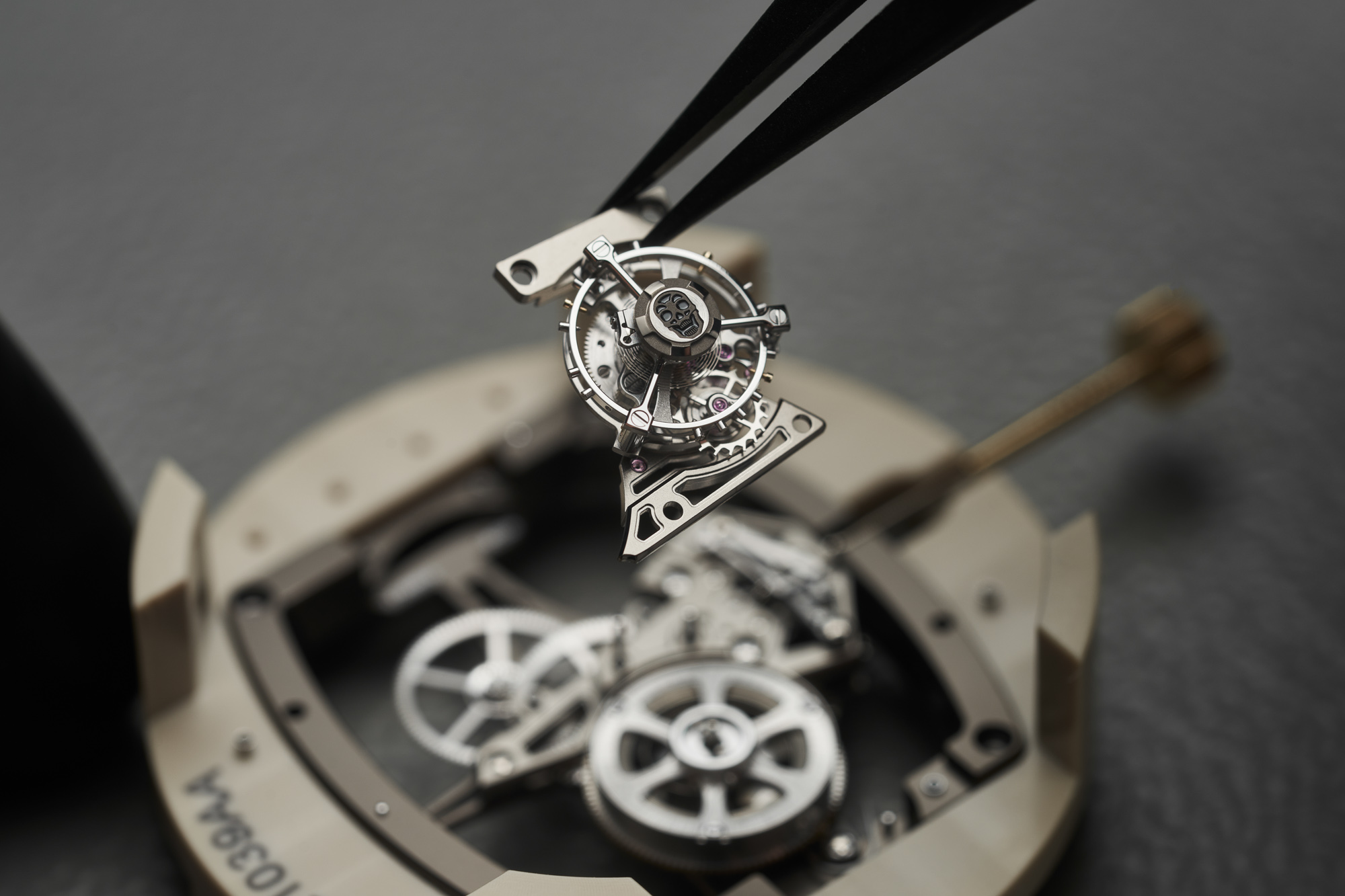 Even the most humble Richard Mille watches are six-figure statement pieces, and when you consider that the new RM 66 features both a flying tourbillon and an intricate skeletonized hand sculpture made from solid 5N red gold, you can virtually guarantee that this watch will be rather expensive. With an official retail price of $1,095,000 USD and production limited to 50 pieces worldwide, the Richard Mille RM 66 Flying Tourbillon is one of the more expensive and extravagant models from the brand’s current collection, although it is still priced below other premium releases, such as the RM 88 Smiley and the ultra-thin RM UP-01 Ferrari watch. That said, the Richard Mille RM 66 Flying Tourbillon still costs over a million dollars, and its mega-expensive price tag is arguably just as much of a statement as the solid-gold skeleton hand throwing up the rock and roll “horns” salute at the center of the dial. For more information on the Richard Mille RM 66 Flying Tourbillon, please visit the brand’s website.