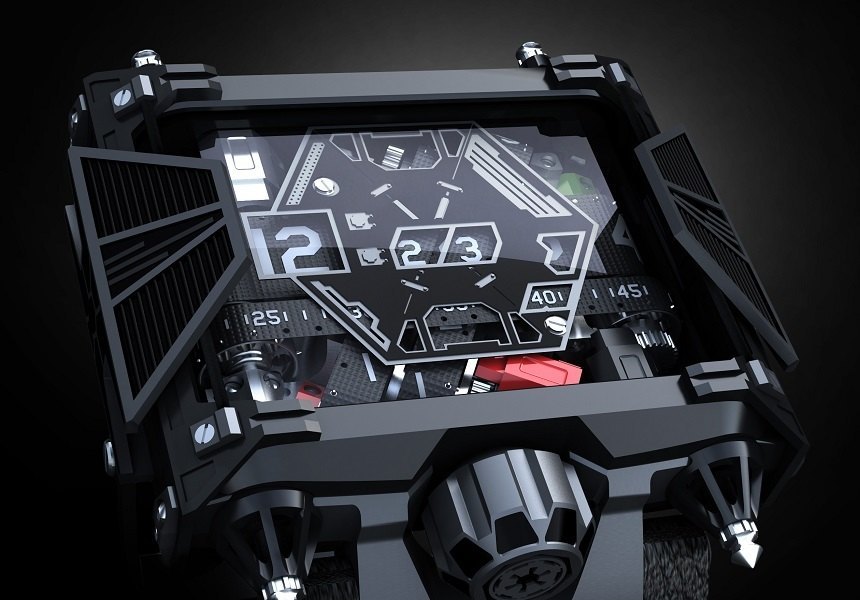 Devon Star Wars Limited Edition Watch Based On The Tread 1 Not so long ago, in a galaxy just around the corner, Nixon released a new wave of Star Wars watches in anticipation of the upcoming installment of the world famous franchise. Today, we announce the release of another Star Wars-inspired watch from another American brand: watches from Devon Works are already well-known in the horological community for a pioneering time-telling mechanism that uses printed belts instead of hands to indicate the passing hours, minutes, and seconds. With the “Star Wars by Devon” co-branded luxury timepiece, the Los Angeles-based design team have rained on their Californian neighbors’ parade. This is essentially a revised version of the famed Devon Tread 1 (that aBlogtoWatch debuted here in 2010 and reviewed here) made in partnership with Disney and Lucasfilm for Star Wars and, of course, debuted today on “Force Friday.” Okay, so maybe it is unfair to compare Nixon’s efforts with those of Devon. For one thing, the prices couldn’t be further apart. The Devon Star Wars watch is 76 times as expensive as the Nixon watches (which retail at $375) – but it is very, very cool. If you were enamored with the Devon Tread 1 watch, then this intergalactic offering will certainly tickle your fancy – especially if you have a soft spot for Darth Vader or the Empire (or the dark side). If you love Star Wars, you will probably think this watch is cooler than the scene in which we see the back of Anakin Skywalker’s scarred head before the helmet clips back into place and Darth Vader swivels to face the camera… Talking of Darth Vader, the Devon Star Wars watch has been entirely based on him and his surrounding effects from the film. Obviously, we are used to seeing watches “inspired” by this or that, but rarely do we see a watch that levers so much of its muse into such a small space with such authority and gusto. Almost every design cue Darth Vader could have conjured has been heeded in the architecture of this watch. Does it look busy? Yes, it looks like all the bits from the famous trash compactor scene decided to form a dance troupe. But does it work? You’re damn right it does. I mean, it shouldn’t. I guess it goes against every design principle or rulebook I would ever think to follow. It should look gimmicky; it could look cheap; it should look like a teenager has tried too hard to cram all of his favorite stuff into one timepiece. But it doesn’t. Somehow, despite the Tie Fighter bits here, and the Control Panel elements there, it looks sleek, elegant, self-confident, and totally badass. In my opinion, it takes the belt-driven system we saw in the Devon Tread and runs with it. This housing is miles better than the steampunk-inspired case that first carried the novel complication that binds the two. I liked the Devon Tread; I love the Devon Star Wars watch. So let’s break down exactly what we’re looking at: the case flanks are based on the wings of a Tie Fighter (whether they look more like squashed wings from a Tie Interceptor or two thirds of the wing of Darth Vader’s own private Tie craft will – hopefully – be geek fodder for the times to come); the crown bears the imperial logo (which was clearly designed by George Lucas to be used in watchmaking at some point); the main screws that connect the case to the lugs are based on turbine intakes, finished in polished silver to emulate the spikes on the bottom of Darth Vader’s breathing grille; the belt system utilizes four motor covers in red and green to mimic the switches on Darth Vader’s center console (mounted on his chest, for the uninitiated); and let’s not forget the lovely leather strap, attached with some very bulky-looking screws, ribbed to mimic Vader’s gloves. And it’s not just cool design that makes this watch appealing. The watch uses some high-grade aviation materials in its construction. The belts themselves are glass-reinforced nylon, as used in the original 747 gauges. With 313 electrical contacts, Devon claim that this watch is a “kinetic engineering masterpiece.” Strong praise, but not totally unwarranted when you consider Devon had to design a lot of their watch-work from scratch. It is a really weird way to tell the time, but not at all difficult. It’s just unusual to see an analogue display operating at so many angles with such rigid efficiency. It’s worth noting that this unusual exercise in co-branding was not achieved by traditional methods. Old school watchmakers were not used in this project; instead, Devon Works enlisted the help and expertise of the US Aviation Industry. The result is a rather handsome stainless steel watch with black DLC coating and limited edition Tie Fighter cuff-links to sweeten the deal.

Devon has followed up the Tread 1 with other models such as the Tread 2, but the brand has been rather silent for a while despite the opening of a Pasadena, California manufacturing location. The last time the Tread 1 got this much attention was with the cool Devon Tread 1 Steampunk (aBlogtoWatch review here). It is an amazingly quirky and cool high-end gadget that successfully dabbled in the luxury watch world. Big and chunky, it is a statement piece like no other, and it still happens to be very comfortable. Now it will be on the list of “watch items” for a lot of very hardcore Star Wars fans. There will only be 500 of these pieces available, and they will be delivered to the eager mitts of all Lucasfilm fans in a box inspired by Darth Vader’s Tie Fighter. The watches will be built over a two-year period and will have a retail price of $28,500. It would be really cool if the world has mastered drone delivery technology by the time your watch is ready to be dispatched. I think seeing your own private Tie Fighter fly by your window is worth nearly thirty thousand of anyone’s credits. devonworks.com