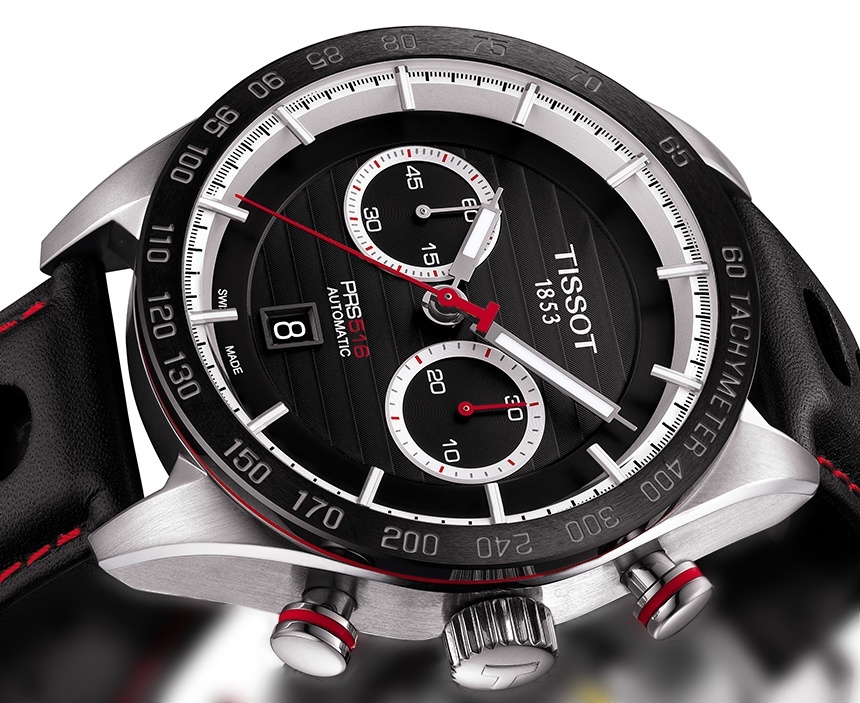 With the increasing popularity of more sporty, retro-inspired watches, perhaps Tissot felt the need to remind us that they’ve been doing it all along. While Tissot’s PRS 516 watches have always been retro- and racing-themed, the new Tissot PRS 516 chronograph watches for 2015 feel even more so, and yet fresh and more refined at the same time. This is the PRS 516 line upgraded in almost every way and we must say that the changes go a long way. Let’s take a look at some of the notable updates and new features, such as its movement and that ceramic bezel. Tissot watches represent some of the best value among entry-level Swiss brands, and watch lovers probably become familiar with the Tissot PRS 516 line early on. These watches have what I would describe as a certain rawness mixed with retro charm that many Tissot watches have to some degree or another – but I feel those characteristics are even more prominent in the PRS 516 watches. The collection always stood out to me first because of the weird (interesting) steel bracelets with giant holes some models have, and also because of their rather thick and angular cases. The overall collection contains quartz and automatics, with three-hand and chronograph models. Previously, the automatic chronographs have featured ETA 7750 movements with tri-compax chronograph layouts, day of the week, and date indications, as well as chunky 45mm-wide, 14.84mm-thick cases. Of note, also at 45mm wide, the 2015 Tissot PRS 516 appear to have a totally different, less angular (though perhaps also less distinctive) case with some softened edges, but at a full millimeter thicker at 15.84mm. These should certainly feel “solid,” and the 100m of water resistance also suggests a general sense of durability. Though you never really know until you try a watch on, I’m afraid for a 17mm (6.5″) wrist like mine, they will just be too big. On the previous models, I always thought the three subdials felt a bit small and crammed into the center of the dial – maybe the size of the 7750 movement (29.89mm) didn’t necessitate that case size. In any case, you probably want to try one on before buying – as with any watch, of course.

Bi-compax chronographs always immediately look more retro to me. The 2015 Tissot PRS 516 features the bi-compax layout of the ETA A05.H31 automatic chronograph movement that gives it a look that is pretty distinctive from the familiar ETA 7750 tri-compax layout of its predecessors – and so many others out there. You can see the same layout on this Rado watch also using the ETA A05.H31. I think a lot of people will like the simplified, symmetrical, and cleaner look of the newer Tissot PRS 516 watches and not mind the loss of some of the 7750’s functionality (day of the week, chronograph hours). The size and placement of the subdials feel much more balanced, the dial texture is welcome, and the details feel refined. I might also mention that the Tissot PRS 516’s ETA A05.H31 movement boasts a 60-hour power reserve – that’s generally longer than the 7750. Not bad, right? Ceramic bezels seem almost mandatory these days, but it is noteworthy here as an upgrade and welcome for its durable and attractive properties. Also note the “floating” hour markers that add visual interest and three-dimensionality to the dial (under a sapphire crystal, of course). A less commonly seen movement, upgrades (like the ceramic bezel), and design refinements, all adding up to a more attractive model in a long-standing Tissot collection… it reminds me a lot of the Tissot Seastar 1000 Powermatic 80 watch from 2014 that showed similar upgrades at the time. It seems someone at Tissot is making some good decisions and I, for one, am happy to see them going in this direction. We cannot neglect to mention the car and racing association attached to the Tissot PRS 516. Racing and chronographs go together like, say, red and black, and there are a couple of relevant design elements for the car enthusiast to enjoy: the chronograph pushers are apparently inspired by car engine pistons, the strap has holes to evoke a steering wheel of that style, and the simple automatic rotor is also obviously automotive in theme. Those pushers in particular are a nice touch. At this price point, however, you shouldn’t expect that the display caseback also be sapphire crystal, nor much more than very basic movement decoration. Also, here’s a picture of NASCAR star and Tissot brand ambassador Danica Patrick wearing the Tissot PRS 516 – if her wrist can handle it, maybe mine can after all.