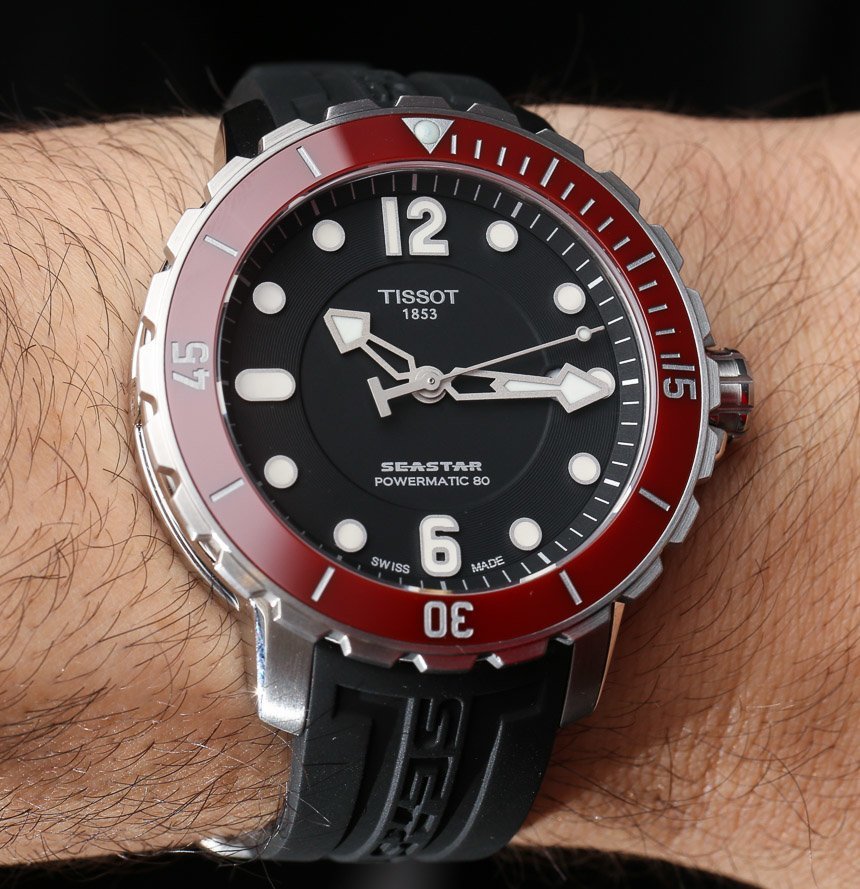 For 2014, Tissot quietly released a new version of their Seastar dive watch range, called the Seastar 1000 Powermatic 80, that includes some upgrades and features that make it a standout diver for the money. We anticipate that these new features will slowly replace the existing generation Seastar models, but in actuality there may be pros and cons to both the new and old Seastar models.

At 42mm wide in steel, the new Seastar 1000  Powermatic 80 is a wonderfully comfortable mid-size diver. We say mid-size because it is difficult to find men’s dive watches under 40mm wide, and many dive watches are 44mm wide and over. Further, at 42mm wide it wears smaller than some other 42mm wide sport watches because of the comparatively narrow lugs. Finally, with a thickness of just 12.4mm, it has a nice slim profile on the wrist. 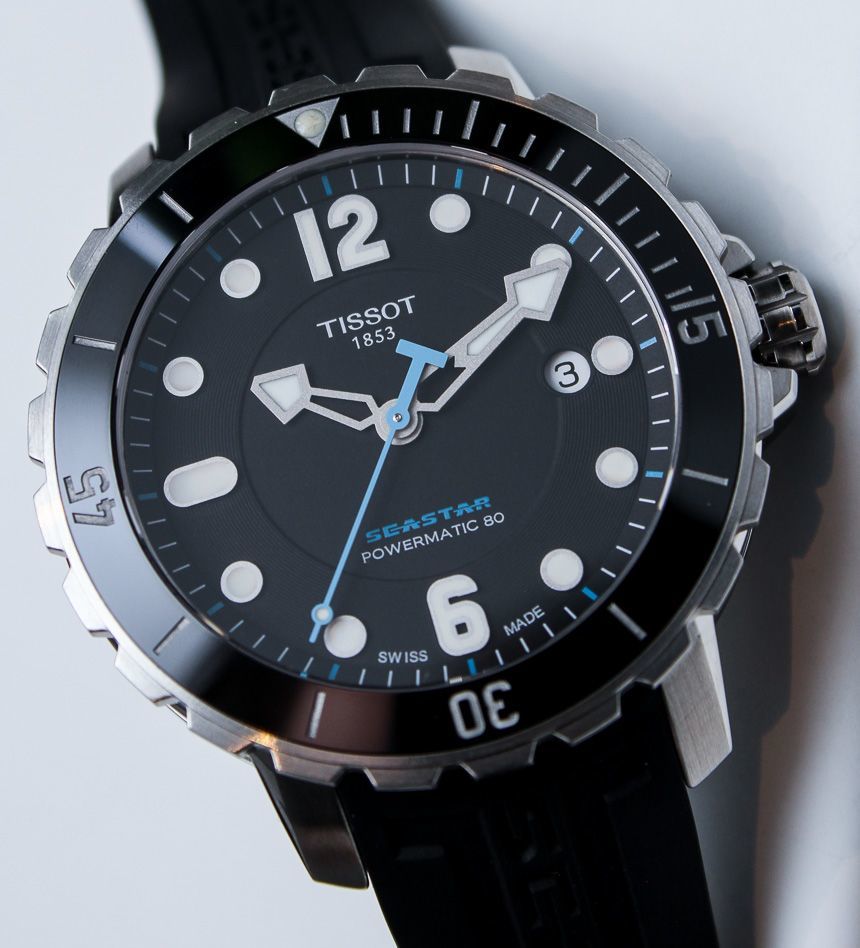 If you put a 2013 and 2014 Seastar 1000 watch next to each other it will take a minute to see the differences between the two. There are many, though. Let’s start with the bezel. For 2014, Tissot is giving the Seastar a ceramic bezel insert, which will come in blue, black, and a maroon red. The latter, of course, gives the watch a black and red tone similar to the very trendy Tudor Heritage Black Bay. The ceramic bezel inserts are rather nice, actually. Rather than just being a flat ring, they slope just a bit where the bezel meets the dial and the markers are actually cut into the bezel rather than being printed on it.

This new bezel design also means that the “serrated” grip on the outside of the bezel is a bit more prominent on the new model as compared to the older models. Over the dial is an AR coated sapphire crystal and there are also some minor changes on the dial. Of course, the overall look and feel of the Seastar dial is the same, but the new model features an upgraded look. This starts with the new applied hour markers that are metal and then filled in with lume, along with a new date window that is a distinct entity versus blending in with the 3 o’clock hour indicator. Side by side, one can see the visual differences much more. 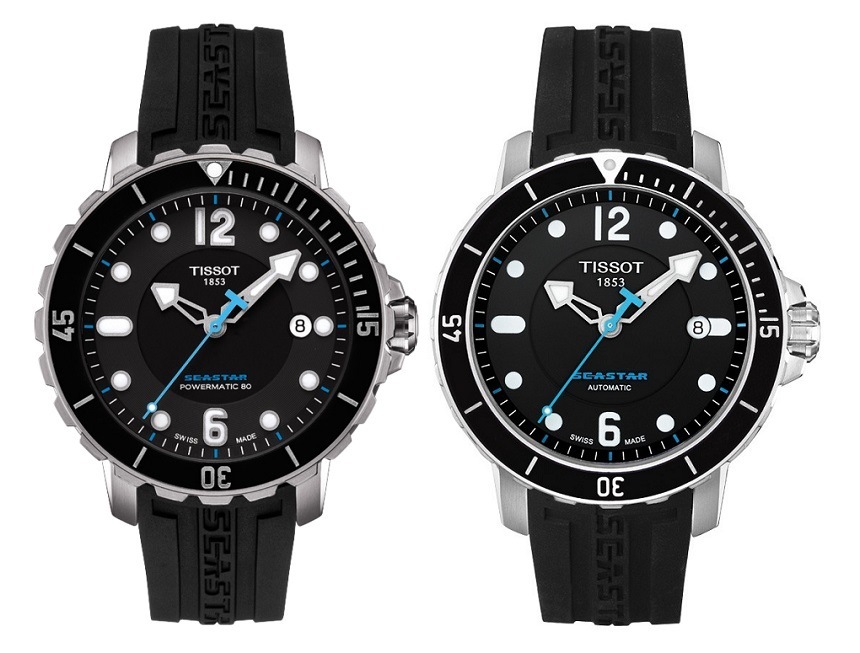 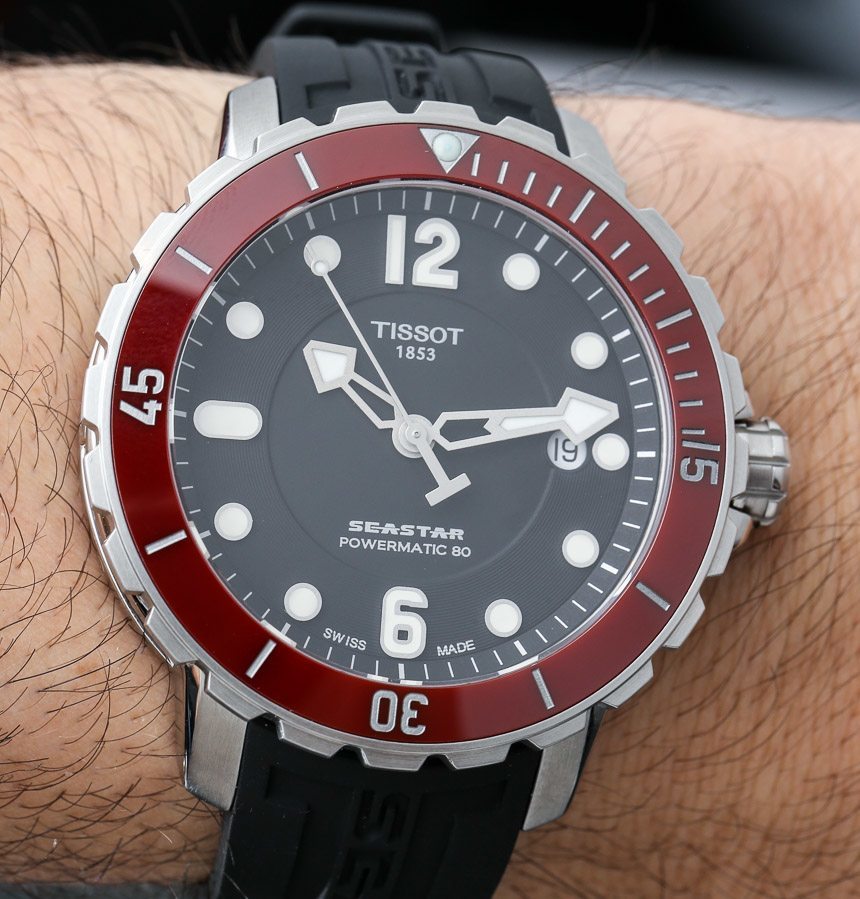 What is also new is the “Powermatic 80” indicator on the dial. This is because the Tissot Seastar 1000 no longer uses the Swiss ETA 2824 automatic movement, but rather the new Tissot Powermatic 80 automatic movement which is the ETA caliber CO7.111. This I believe is essentially a modification of the 2824 but with an 80 hour versus roughly 40 hour power reserve. How do they do that? Basically the frequency of the balance wheel is reduced so that it draws less power and thus allows for a longer power reserve.

It is possible that ETA was able to insert a larger mainspring as well, but the 80 hours of power reserve seems to mostly be a function of reducing the frequency of the 2824 from 4 Hz (28,800 bph) to 3 Hz, (21,600 bph) in the CO7.111. What does this mean? Well when a movement operates at a slower frequency there are less beats per a second, and thus are deviations in accuracy will be more pronounced. That means errors in timing will be more visible and while the watch will have a longer power reserve, if not regulated properly, it might not be as accurate over time. 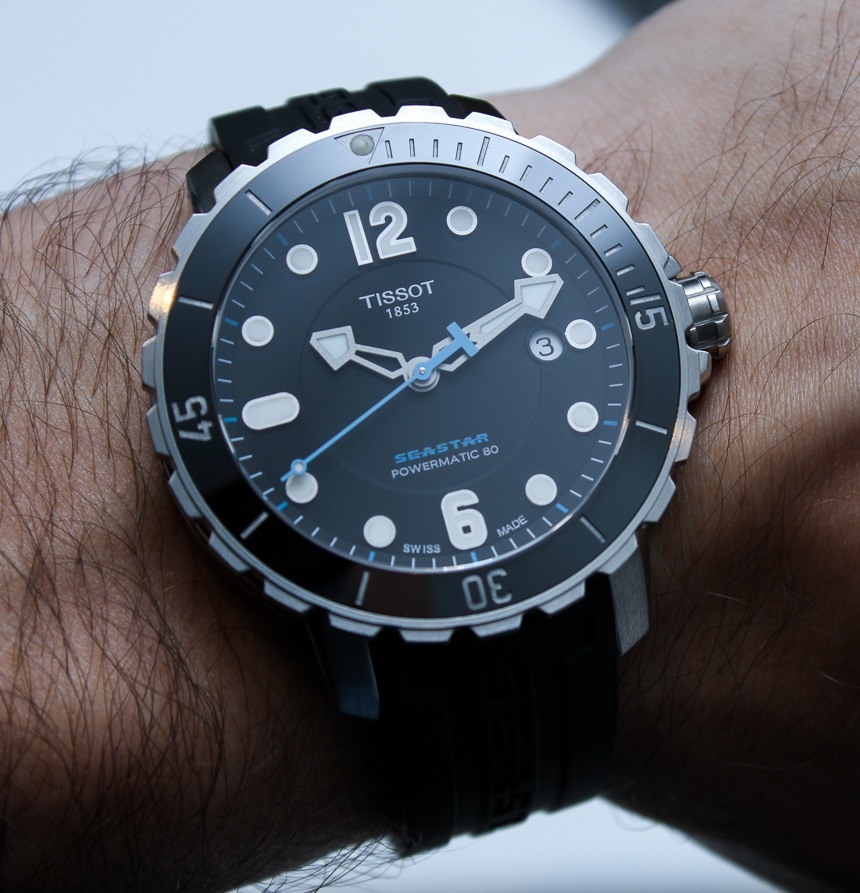 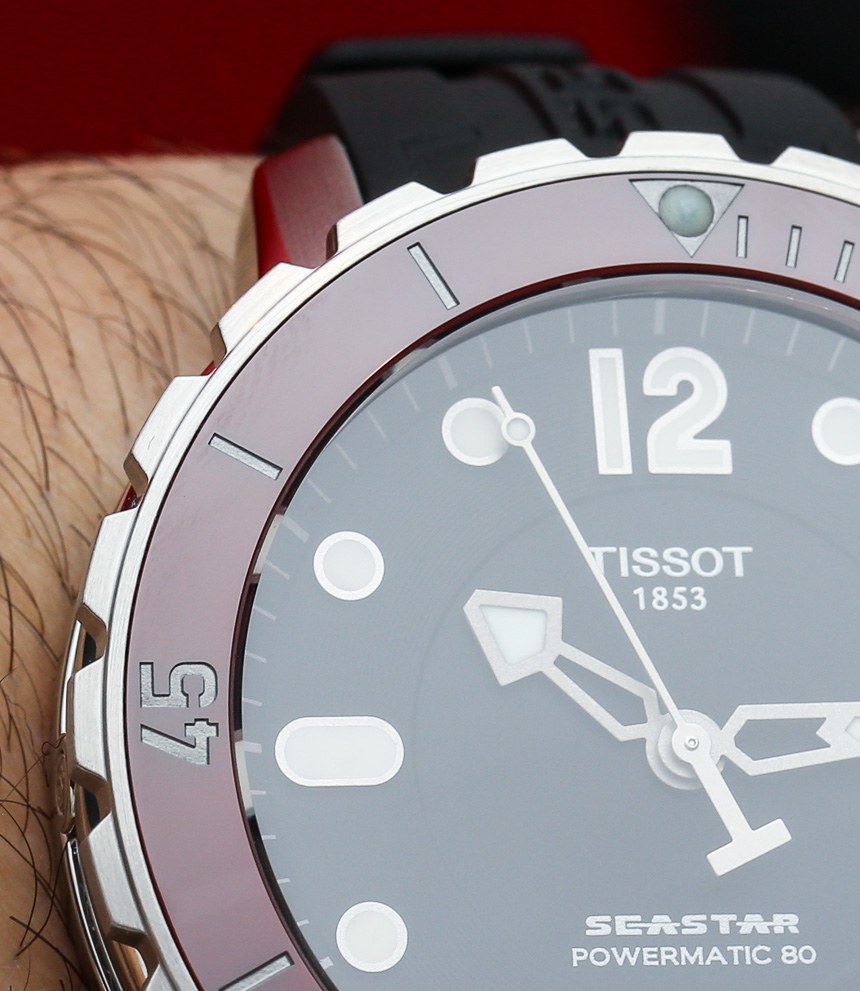 Therefore, you can see that both the CO7.111 and 2824 movements have their own advantages. The Swatch Group is heavily leaning on the former as being the type of product that they feel will help get people more excited about watches because of the increased power reserve which tends to be unavailable in other watches at this price. Further, for the time being, the Powermatic 80 and other similar movements (Hamilton has some as well) are not going to be available in watches outside the Swatch Group brands.

Given that I don’t solely rely on my watch to tell the time, even though I check my watch more than my phone, I’d probably go with the Powermatic 80 over the 2824, especially because I have so many watches with 2824s in them. The other upgrades to the Seastar 1000 are also very nice when you compare the two. This has turned a decent budget Swiss dive watch to one I’d gladly wear as a beater or sports watch. 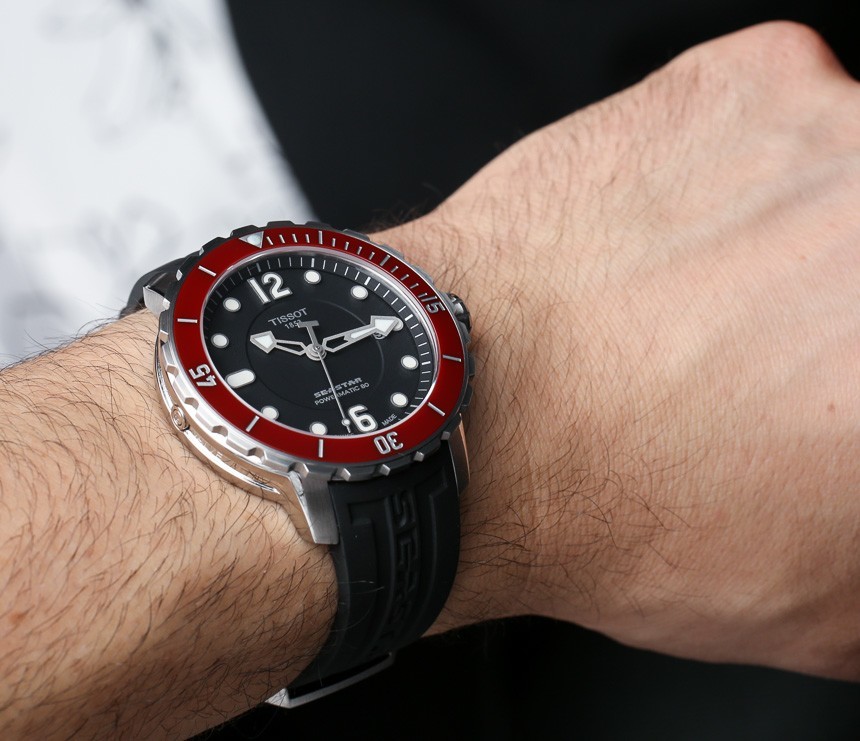 In addition to being 42mm wide, the Seastar 1000 Powermatic is water resistant to 300 meters (about 1000 feet), has an automatic helium escape valve in the case (why not?), and a nicely-sized and grippy crown. All of this comes in a relatively small package that further manages to have a modern and distinctive case design. The dial also happens to be quite attractive if you are into a modern look (as I am).

Tissot, of course, has a range of Seastar dive watches that goes into the much larger chronograph models. At 48mm wide, the Seastar Chronograph is an entirely different beast, but one of the coolest ones was the limited edition Seastar 1000 Chronograph Valjoux Limited Edition that I reviewed here. I think most will agree that at 42mm wide in a roughly 12mm thick case the new Seastar 1000 Powermatic strikes a great balance between size and design. 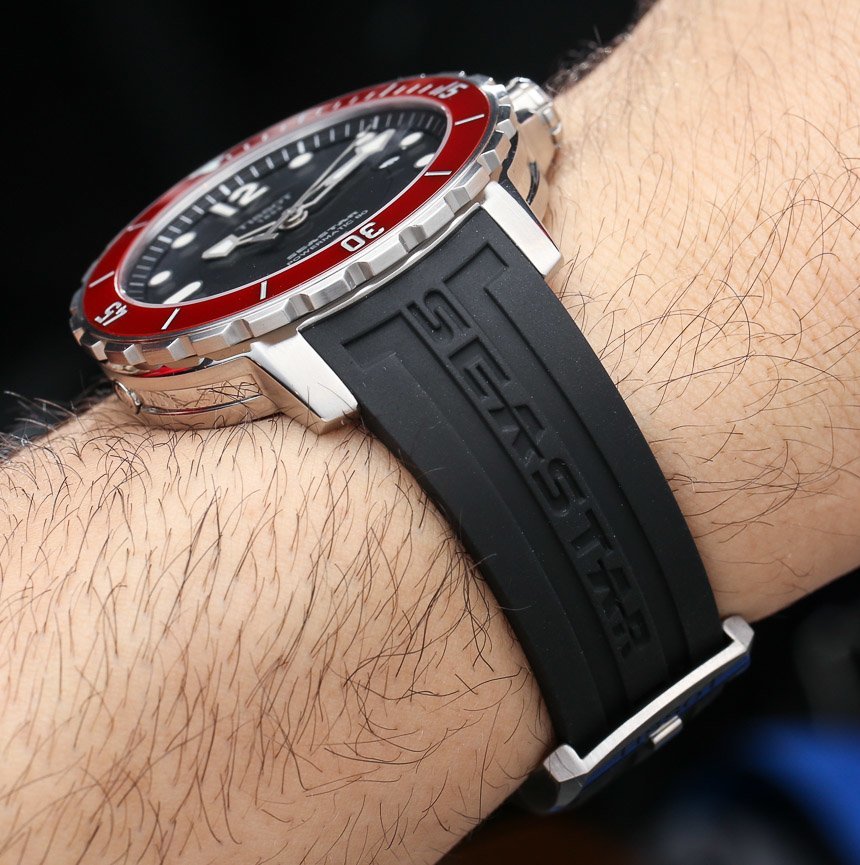 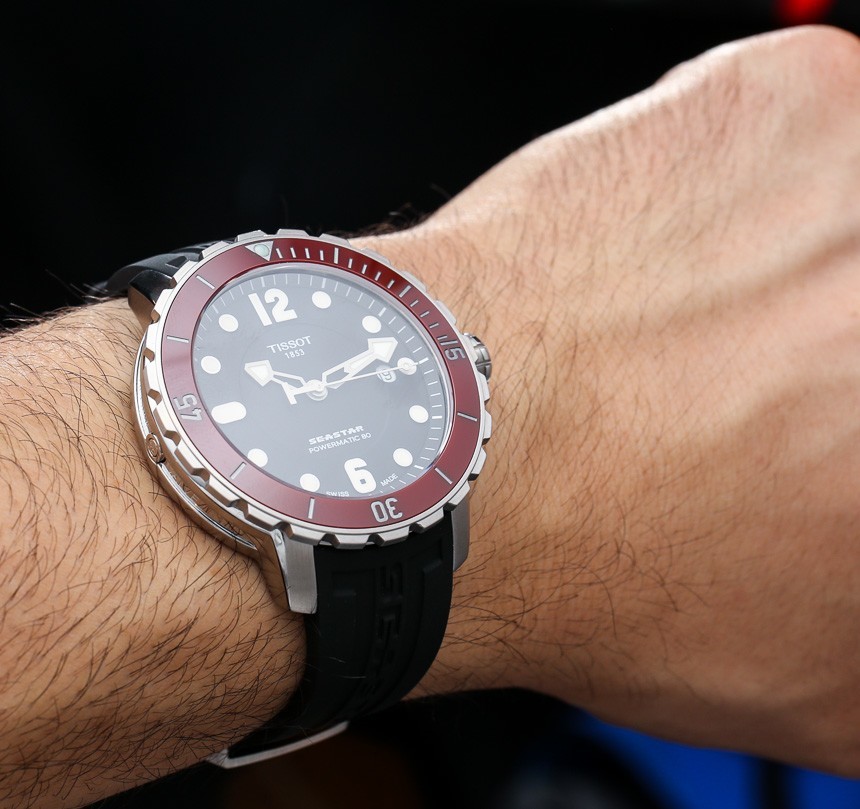 This year Tissot will release three versions of the Seastar 1000 Powermatic Diver. They include the Seastar with a black dial and bezel with blue trim, the black dial with red bezel, and the matching blue dial with blue bezel. The watches are available either on the steel metal bracelet or the branded and fitted rubber strap.