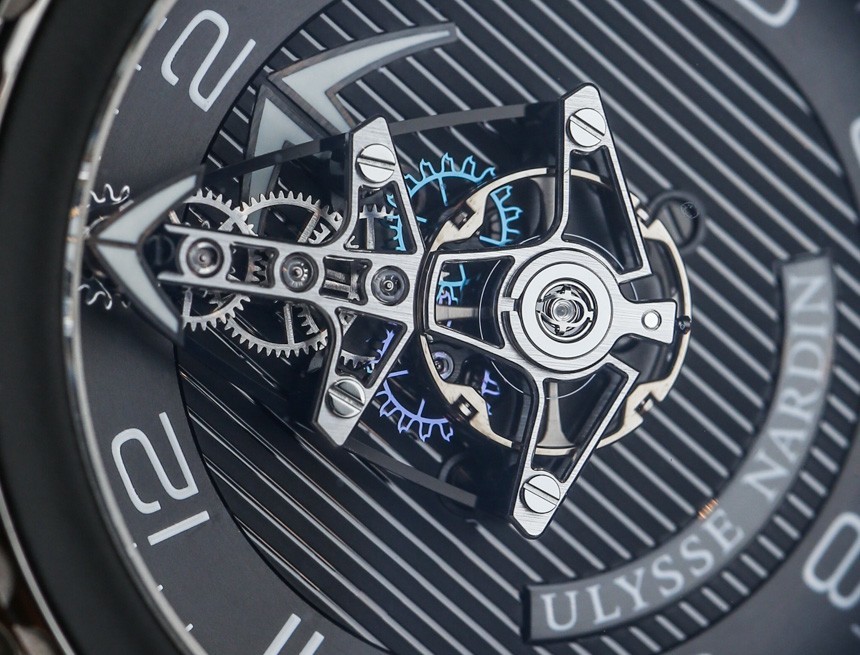 Easily my favorite watch from Ulysse Nardin is their famed “Freak” which, since 2001, has been the “anti-classic” luxury watch for those who love modern design and horological nerdery. What I like more is that Ulysse Nardin keeps upping the ante on their seminal silicon watch (the Freak was the first production Swiss watch to include silicon parts as components in the mechanical movement), adding more features and increasing the durability and performance of the system. At its heart, the watch features the entire silicon gear train on the dial which is actually located on the minute hand. With the latest generation Freak, known as the “FreakLab,” Ulysse Nardin adds even more, including the company’s new in-house “UlyChoc” technology which acts as a shock absorber. UlyChoc sounds like a child’s chocolate candy, but it isn’t digestible by humans. Rather, the innovative system specially designed for a Freak-style watch is a silicon shock absorber system designed for the pinion which holds the entire hand/running gears/regulation system on the dial. This is easily the most sensitive element of the watch and rather heavy (comparatively speaking) given that it rests on just one connection point. Ulysse Nardin redesign and strengthened this crucial connection point in the watch and also gave it the ability to absorb some vibration and shock. This comes after a series of interesting innovations to this system which include removal of the top pin (early versions of the Freak actually had a pin in the sapphire crystal over the dial right down through the watch) as well as a dual escapement system (Dual Ulysse Escapement). We’ve included some images of the UlyChoc system and, if successful, such technology could find its way into future in-house-made Ulysse Nardin movements. The reason Ulysse Nardin chose to give this version of the Freak watch family the “FreakLab” name is perhaps to remind everyone that the Freak is not only about offering a super unique and interesting product, but also to serve as a laboratory to test new technology. Ulysse Nardin recently went from being an independent company to being purchased by Kering and I truly hope that under the larger company’s ownership the ever-cool Le Locle, Switzerland-based watchmaker remains true to its ambitious efforts, as realized by late owner Rolf Schnyder who sadly passed in 2011. One of the easiest-to-miss elements of the Ulysse Nardin FreakLab is perhaps among the most important. Compared to previous versions of the Freak, the balance wheel on the minute hand is no longer placed on the “counterweight” end of the hand, but rather, directly in the center at the axis point. The balance wheel still makes a full revolution each hour (which I suppose makes it a true “one-hour tourbillon”) but is now probably a lot more stable in this position. Ensuring the watch’s balance wheel is not unnecessarily disturbed is a key element in ensuring accuracy over time. Of course, the balance wheel uses a silicon hairspring (balance spring) as well as “Dual Ulysse Escapements” in silicon. The new in-house made movement in the Ulysse Nardin FreakLab is known as the Ulysse Nardin UN-210 and also features no crown. Like all Freak family watches, the movement is wound by turning the rear of the caseback to directly wind the large mainspring that is partially visible through the rear of the case, making for a sort of simple power reserve indicator (because you can see how tightly wound the spring is). The total power reserve is seven full days, so even though winding is a bit of an effort, you only have to do it once a week. The movement operates at a modern 4Hz (28,800 bpm), and setting the time is similar to winding it but done with the bezel. A small latch located under the 6 o’clock position on the bezel needs to be lifted which unlocks the bezel. Once unlocked, the wearer can turn the bezel left or right to set the time in either direction. The Ulysse Nardin FreakLab indicates the hours (smaller arrow-style hand), and minutes (larger hand, of course) as well as, now… the date via a disc visible at 4 o’clock. The Ulysse Nardin FreakLab watches comes in a 45mm-wide case currently in two limited edition versions. There is the 18k white gold model as well as the “boutique-only” PVD-coated black titanium and carbon fiber model. This latter version is probably my favorite since it gives the Freak a more unique look compared to what I am used to. It also makes the timepiece feel sportier, which is something that I’ve wanted for a while, since Freak watches in precious metals such as gold are actually pretty heavy and not always good for “active wear.”