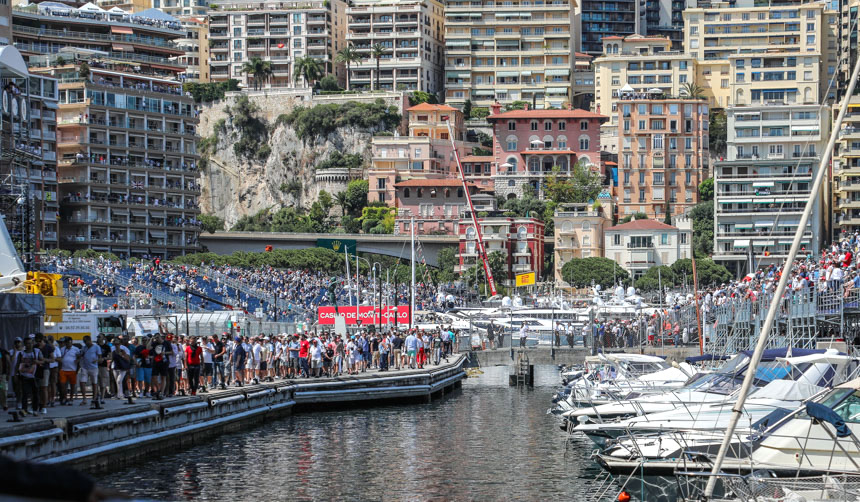 Now, onto the second watch I wore, the Monaco. You’ll remember that this is quite true to the original model that debuted in 1969 with a notable exception being that, though it’s in the name, the reissued Monaco does not run on the Caliber 11. Rather, there’s a Sellita movement featuring a Dubois-Depraz chronograph module. I think even TAG Heuer would concede that the addition of the name of one of the most historic and well-known movements (let alone chronograph movements) in recent memory without the actual physical, beating movement being present is confusing. The oft-recited history of the Heuer Monaco begins in the 1960s when Jack William Heuer teamed up with Breitling, Dubois Depraz, and Buren in a partnership that resulted in the Calibre 11 which is one of, if the not the first, automatic chronograph movements. Seiko and Zenith each claim to have been first, but it’s fair to say each successfully developed an automatic chronograph within months of each other. Released in 1969, the Heuer Monaco had a six year run which came to an end in 1975 due to unremarkable sales. It has been discussed at length any time the Heuer Monaco is mentioned, so I am going to keep this brief. Yes, the 1971 classic Steve McQueen film, Le Mans about the 24 hour race in France depicted its star wearing a 1133B Monaco with the rest being history. The nostalgia-tinted lens both the movie and McQueen are looked through often leave out the fact that both the production process of Le Mans as well as its box office reception were something of a disaster. Released about two years ago, the documentary Steve McQueen: The Man & Le Mans presents a compelling behind the scenes look at not only the making of the film, but the man behind it. A film with no script and a director (John Sturges, who directed The Magnificent Seven and The Great Escape) who quits the movie in frustration saying he’s “too old and too rich” to deal with McQueen who, in part, was fighting against having a typical Hollywood movie, and a star at the helm in McQueen who nearly gets himself killed in a car accident while driving his mistress home sounds like a recipe for failure. And it was, at least at the time. The fact that Le Mans focuses more on realism and the authenticity of the race in a way that likens it to a documentary, putting secondary importance on dialogue and story, makes the case that the script and Hollywood director were most likely detractors from what makes the film great. As for the infidelity, I can’t exactly defend it but his philandering did save McQueen’s life and legacy back in 1969. Listed as a target of the Manson Family, McQueen was supposed to be at the fateful dinner in Los Angeles where the Manson Family murders of Sharon Tate and others took place. Indeed, he “ran into a chickie” at the last minute and flaked on the dinner. History would have been much, much different if he didn’t.

So, both the Heuer Monaco and Le Mans were a bit ahead of their time, both having reached cult-legend status as misunderstood icons that are modern classics in their own right. For me, it’s the most captivating aspect of the parallel history of the two. Between 1969 and 1975, Heuer released several iterations of the Monaco, with the reference 74033N “Dark Lord” being the final version (Note to TAG Heuer: please reissue this model). Fast forward a few decades to 1998 and TAG Heuer (renamed after Techniques d’Avant-Garde bought the company in 1985) released the first re-edition Monaco reference CS2110 in a limited run of 5,000 watches. There have been many Monacos made since its reintroduction, but the CAW211P I wore and the CAW2111 aka the “Walter White” model seen on Breaking Bad are the two blue dialed “McQueen” inspired models available today. The Calibre 12 CAW2111 has the TAG Heuer logo as well as more subtle dial differences than the CAL2113. Notably, the crown is on the right side with the chronograph pushers and comes on a leather strap. Personally, I love the square case shape of the Monaco and its 39mm x 39mm dimensions wear much bigger than one would imagine since the watch is substantial especially when you consider the thick crystal. The dimensions are those of a square but the cushioned sides of the case soften it up a little bit. I believe the Monaco was the first water resistant square watch and these contemporary pieces are water resistant to 100m. Of course, dial design is equally as important as case design in making the Monaco as distinctive as it is. The touches of red on the hands and 5-minute increment indices, horizontal indices, classic Heuer logo, and left side crown come together to make one of the most iconic and handsome dials made, period. TAG Heuer’s long standing connection to motorsports is both a result of branding as well as incredible luck, and the Monaco Grand Prix was an incredible place to not only view the year’s biggest F1 race but to try out two watches that I really enjoy for very, very different reasons. Far from perfect, you still have to admire a brand that recognizes what parts of its past to not mess around with (see the Autavia and Monza in addition to the Monaco) while also successfully creating pieces that are like nothing it has made in the past (any new post-Biver watch, really). One more thing about the experience of going to the race, you’ll notice that there are boats. Many, many boats. In fact, the entirety of Port Hercules is the yacht version of the 101 in Los Angeles during rush hour. That is to say that there are a lot of them and they are not really moving for the most part. Yachts, including the TAG Heuer Yacht, serve as home base for the festivities while smaller boats ferry people back and forth from wherever one is going. Earlier I discussed the fortunate fact that there were no serious crashes during this race, but of course that hasn’t always been the case. We’ll have a separate article going into this soon, but TAG Heuer released three special edition watches commemorating Ayrton Senna, the late F1 driver who tragically was killed in a crash during the San Merino Grand Prix in 1994. It’s a thin line to walk for a brand with this sensitive of an association but Ayrton Senna truly had a long history with TAG Heuer dating back to 1988 when he joined the McLaren Formula 1 team which was part-owned by the watchmaker. Senna was involved with making a limited edition TAG Heuer 6000 watch in 1994 while still alive, and to be honest the Senna watches TAG Heuer has made since have been tastefully true to that design. You can see the three new pieces introduced this year above. It’s interesting to consider in 2017, but the events of the outside world really seem to have no effect on the Monaco Grand Prix, one of the most exclusive events of the year. That being said, the passion and dedication of the racers, their crew, and the fans is palpable and TAG Heuer is smartly taking advantage of their longstanding association and involvement with motorsports. And my favorite timepiece that I tried on or saw during the event? It’d have to be the Monaco I wore. tagheuer.com