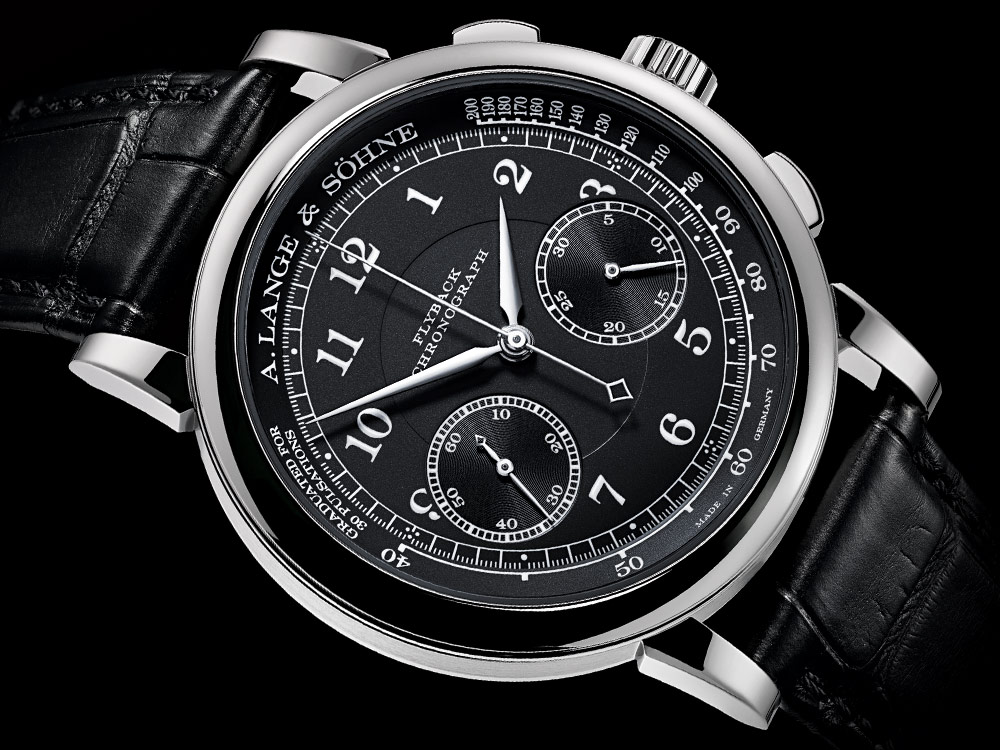 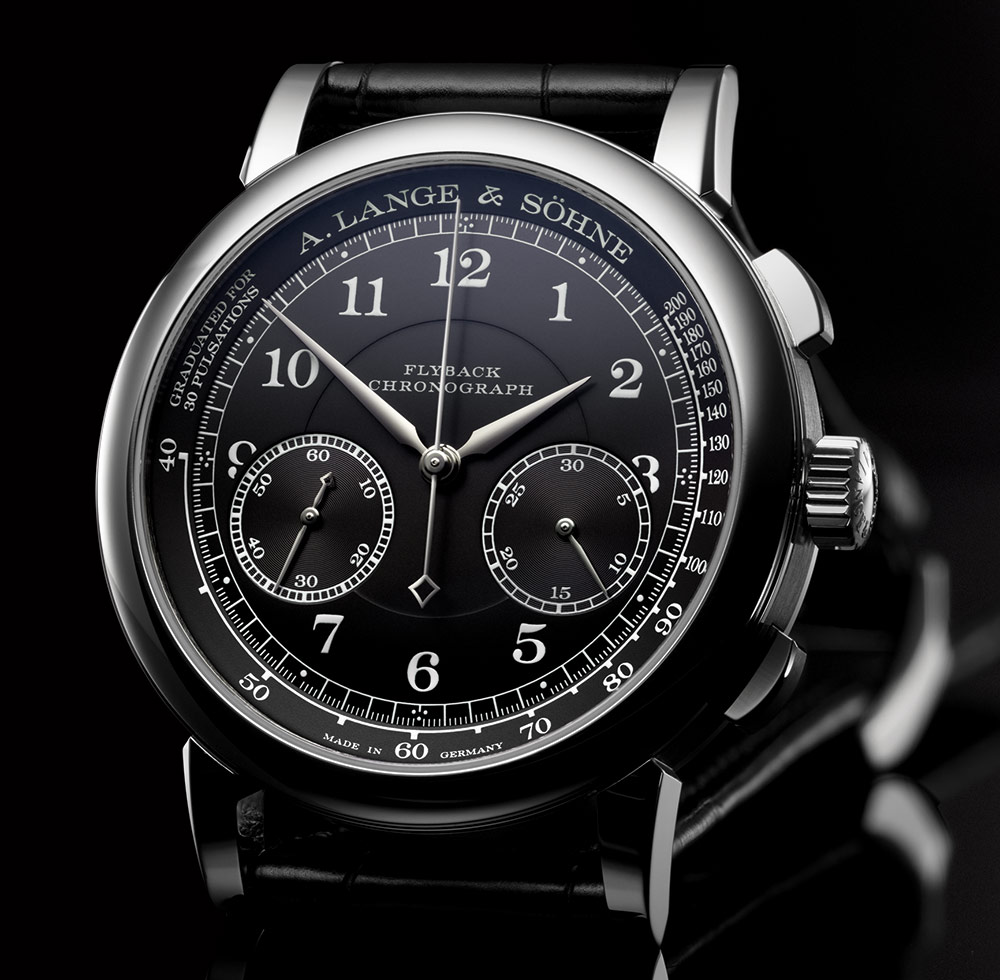 Glashütte, Germany-based manufacture A. Lange & Söhne has announced a new and surprising addition to their 1815 line of watches in the form of the 1815 Chronograph with a black dial and white gold case. With this new look, the Datograph’s younger sibling now looks the part too, and it makes for a hard to beat value proposition within its segment. 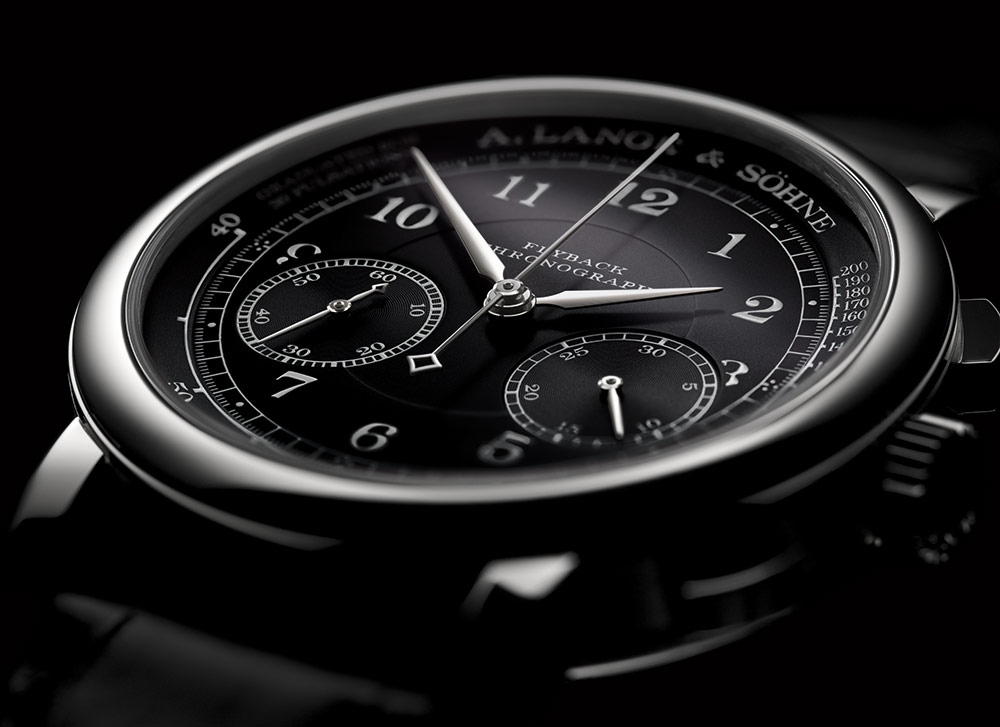 The A. Lange & Söhne 1815 line of watches is named for the birth year of the brand’s founder Ferdinand A. Lange and they’re meant to be evocative of classic design and traditional watchmaking techniques. The 1815 Chronograph was originally introduced in 2004, and saw its movement updated in 2010.

The movement in the current A. Lange & Söhne 1815 Chronograph is the same as the one found in the Datograph (see our hands-on with the Datograph Up/Down in pink gold here), with the date and power reserve complications removed. As far as movements go, you would be hard-pressed to find someone who has seen a Lange movement in person and doesn’t think they’re superlative. I have a deep personal leaning toward Lange and the 1815 Chronograph in particular as it is a grail watch and was my first encounter with high-end watchmaking. 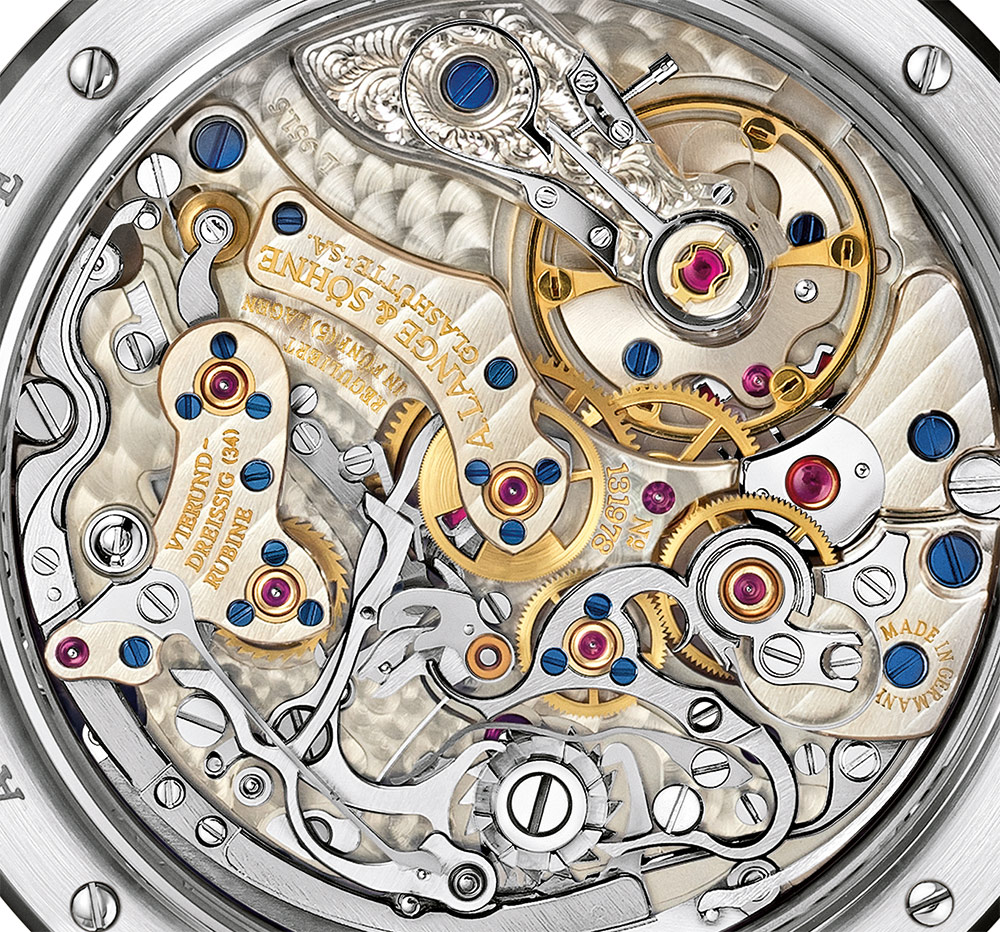 The Caliber 1951.5 is a manually wound movement with a column wheel flyback chronograph (meaning that the chronograph hands can be reset to zero without stopping) complication, free-sprung balance spring, and 60 hours of power reserve. By doing away with the date and power reserve complication, Lange has managed to shave 1.5mm off of this caliber’s width relative to the one used in the Datograph. In usual Lange fashion, the finishing on the movement is excellent.

In addition to the ample amounts of chamfering, engraving, polishing, heat bluing, and Lange’s signature gold chatons (the gold-colored casing in which the rubies sit, held in place by three heat blued screws, a very traditional technique), Lange has designed the movement to be a visual delight. Through the sapphire crystal case back, one can see all the components including the column-wheel, flyback mechanism levers, the snail of the minute counter which jumps precisely at 60 seconds and doesn’t creep along, and even the hand-engraved balance cock, with large balance spring and very traditional swan-neck regulator. Mechanically, this is one of the finest chronograph movements in regular production today. 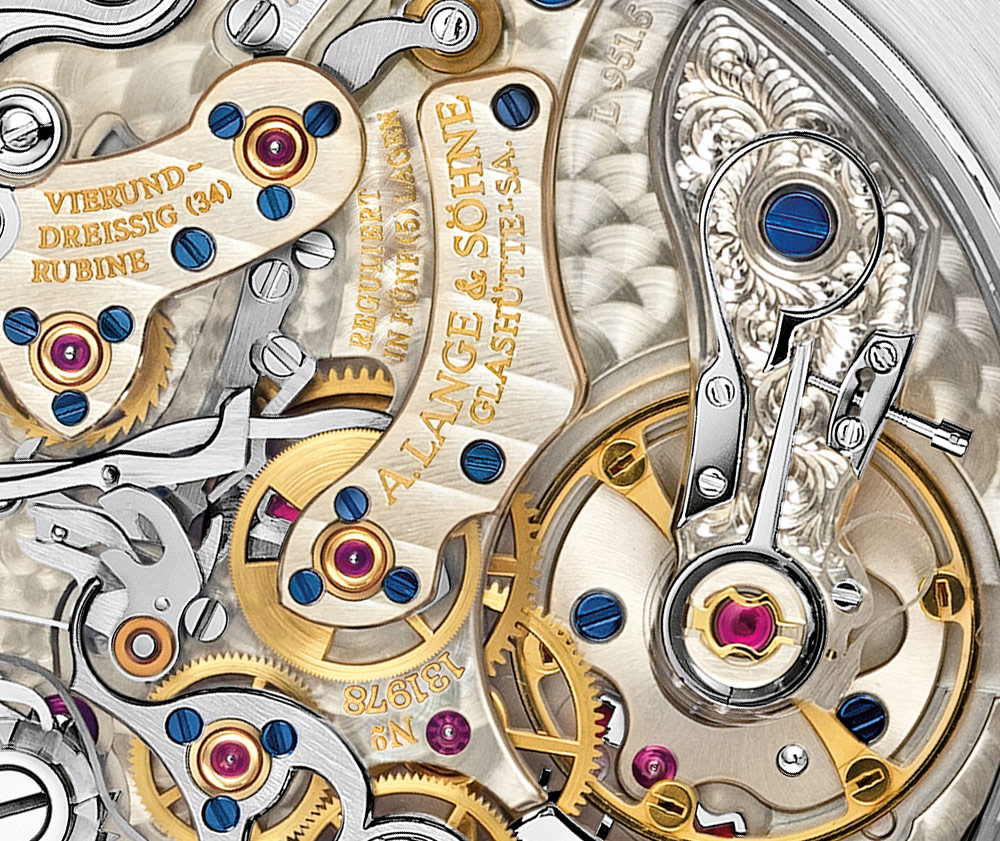 The main attraction of this particular release, however, is not the movement which is shared among all the 1815 chronograph variants, but the dial which is a jet black piece of solid silver. Until now, the A. Lange & Söhne 1815 Chronograph was available in a white/silver dial only, with the black dial being the exclusive territory of the big brother, the Datograph. The heat-blued hands are now replaced by polished rhodium-plated hands.

This combination of polished hands and a black dial is something we have found to be very detrimental for legibility as it can often cause the hands to seem to just disappear. It would be uncharacteristic of Lange to make a poor design choice like this, so I will reserve judgement until I see one in person. The other difference between the Datograph and the 1815 Chronograph is that the latter does not have applied hour markers. They are painted onto the dial in a contrasting white. 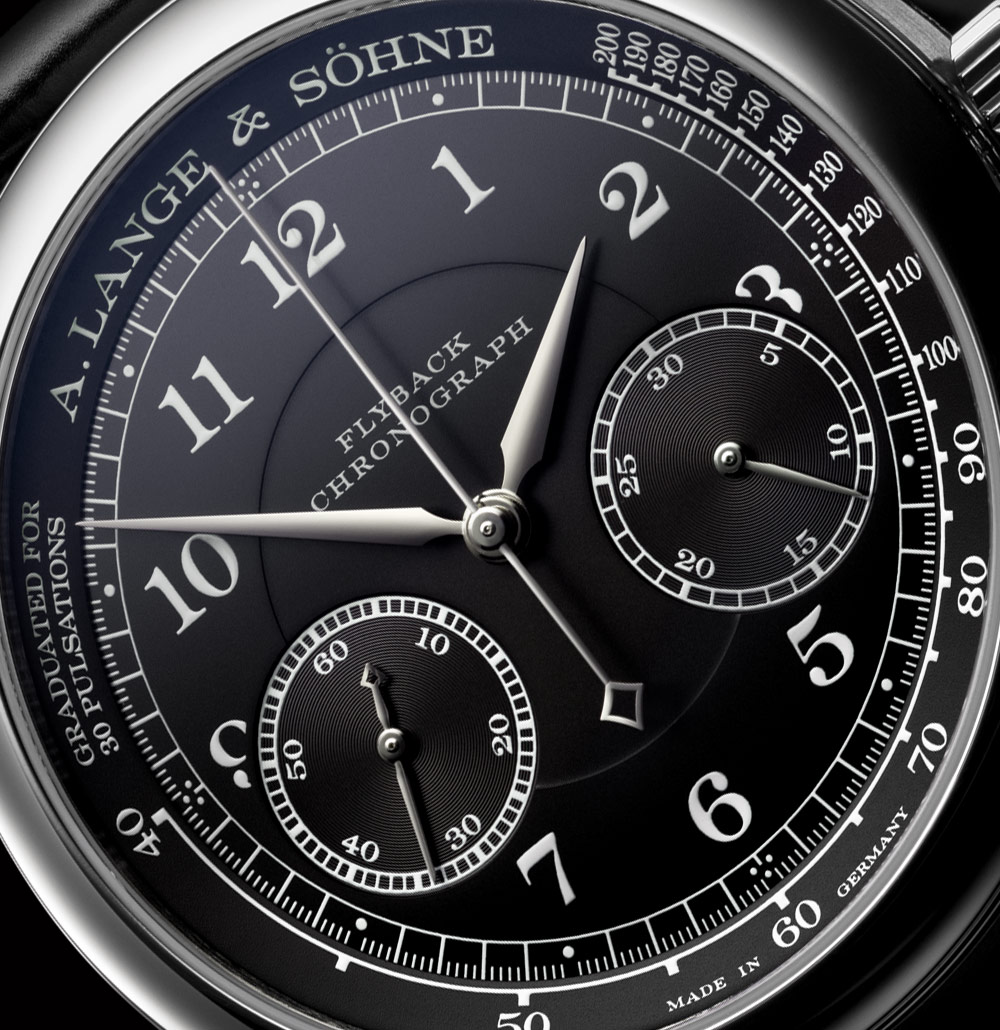 The watch has a classic two sub-dial configuration with running seconds at 9 o’clock and a 30-minute counter at 3 o’clock. In pictures, the placement of the sub-dials can make the dial seem visually unbalanced, but in the flesh and on the wrist this is not an issue, if my experience with the white dialed sibling is anything to go by.

The final update to the dial is the use of a pulsometer scale which hearkens back to the pulsometer scale from the original A. Lange & Söhne 1815 Chronograph from 2004. In fact, the brand tells us that this is the first time they have offered a black pulsation dial in a white metal case. A pulsometer is used to measure heart beat and is a more apropos choice for a dressy watch like the A. Lange & Söhne 1815 Chronograph than a tachymeter scale. 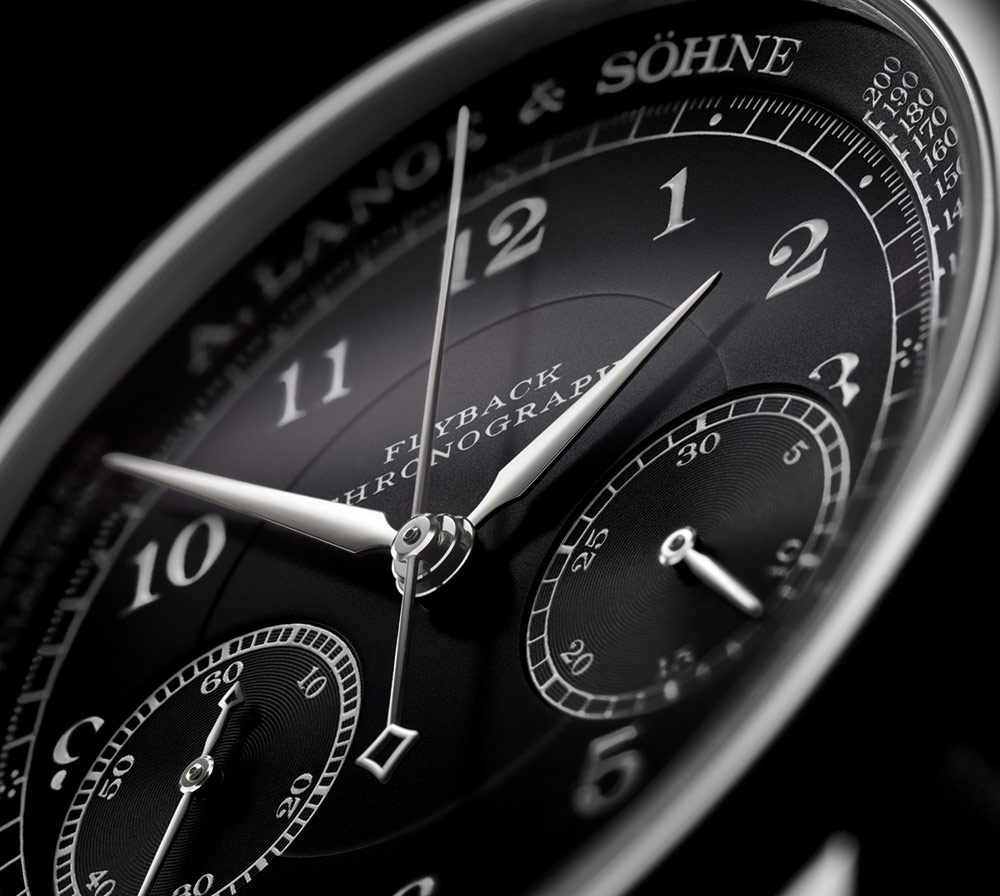 The jet-black dial and the movement are housed in a 39.5mm white gold case, which is just shy of 11mm thick. This is not a svelte watch by any means, but it is noticeably smaller than the Datograph and, in my opinion, sits better on the wrist. The case is a three-part construction with polished top bezel and lugs, brushed sides, and a screwed-down, concave rear bezel holding the sapphire crystal in place.

In keeping with the classic and dressy look, it has a simple fluted crown and rectangular pushers. In addition to the lack of date, power reserve indicator, and applied markers, the choice of case material differentiates the A. Lange & Söhne 1815 Chronograph from the Datograph. While the former is offered in white gold, the latter is in platinum. 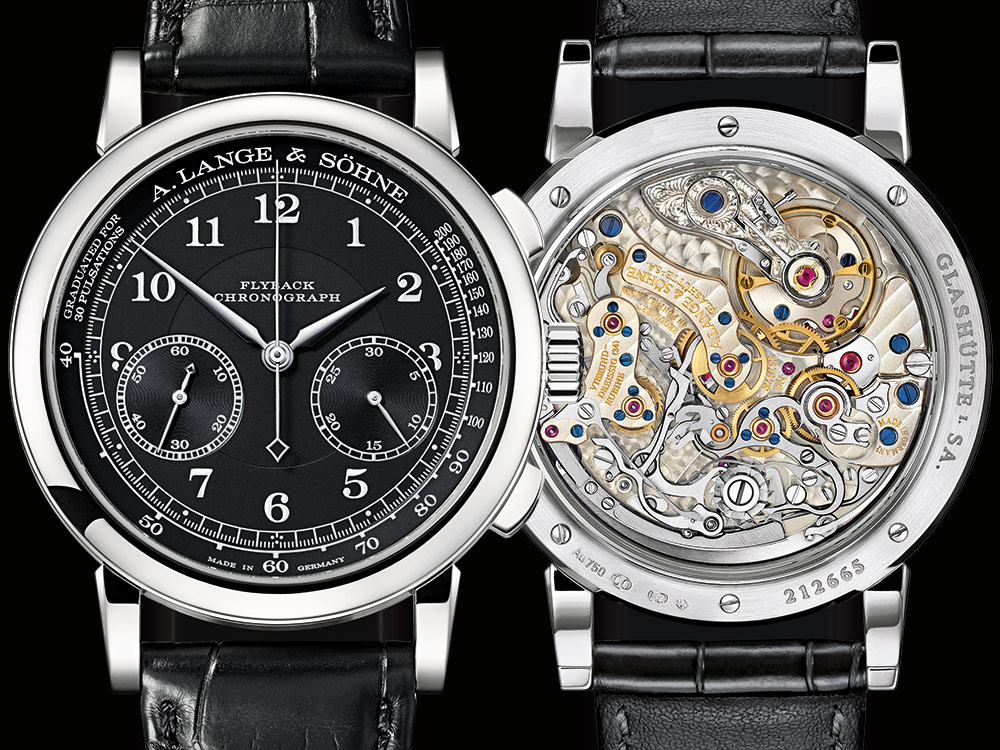 The A. Lange & Söhne 1815 Chronograph is timeless and seems just as comfortable among its peers today, as it did nearly 15 years ago and is a design that will continue to age gracefully. And while the Datograph remains A. Lange and Söhne’s flagship and the watch that reintroduced high-end, in-house, manual-wind chronographs to the world, there are several reasons one would choose to own an 1815 Chronograph instead – especially now, with the availability of the black dial.

As I mentioned before, the more restrained proportions of the 1815 Chronograph mean that it sits better on the wrist and is more comfortable for daily wear, but the most important mechanical parts remain identical to the larger cousin. And then, there’s the matter of pricing. At $50,300 (for all available variants, VAT not included) retail, the A. Lange & Söhne 1815 Chronograph is priced significantly lower than the Datograph and other comparable offerings from Patek Phillipe and Vacheron Constantin, its two main rivals. There are perhaps a few choices in the world of independents, but that’s about it. The new A. Lange and Söhne 1815 Chronograph with the black dial will be available at all authorized retailers on a black alligator strap with tang buckle. alange-soehne.com