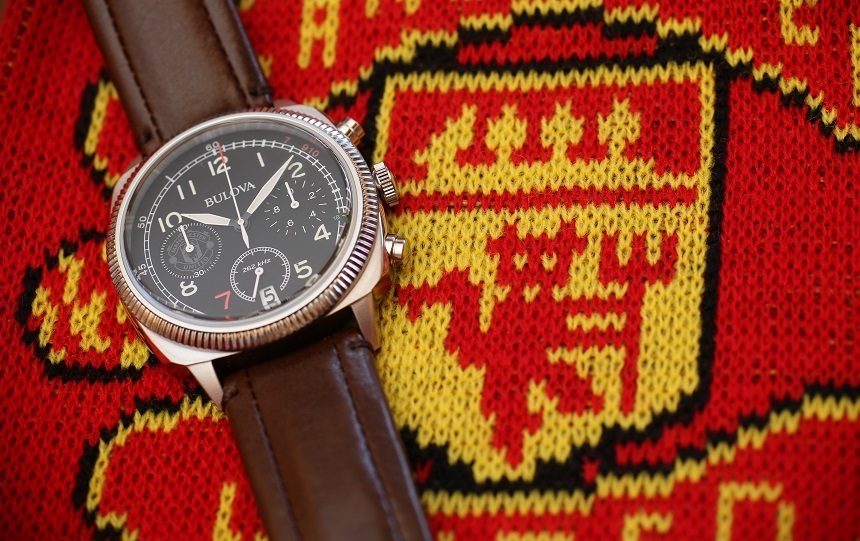 I’m not sure if I can overstate how much I love sport. Sports and watches: Those two brackets encompass every hobby I think I’ve ever had. And I grew up twenty minutes from the centre of Manchester. To say soccer is important to me is like saying teeth are important to an escape wheel. However, when I heard about the Bulova Manchester United Club Watch, I was more nervous than excited. I’ve often daydreamed about melding my two favorite fields, wondering how I could make the Arizona Cardinals logo look classy on the dial of a luxury watch, pondering the possibility that the Toronto Maple Leafs badge would not look too patriotic on a crown, and wondering whether the curly “W” of the nationals would look cool or kiddish if embossed into a strap? I surmised only failure awaited the combination of bold and brash sports insignia, and sleek and civilised watch design. But have Bulova proved me wrong? 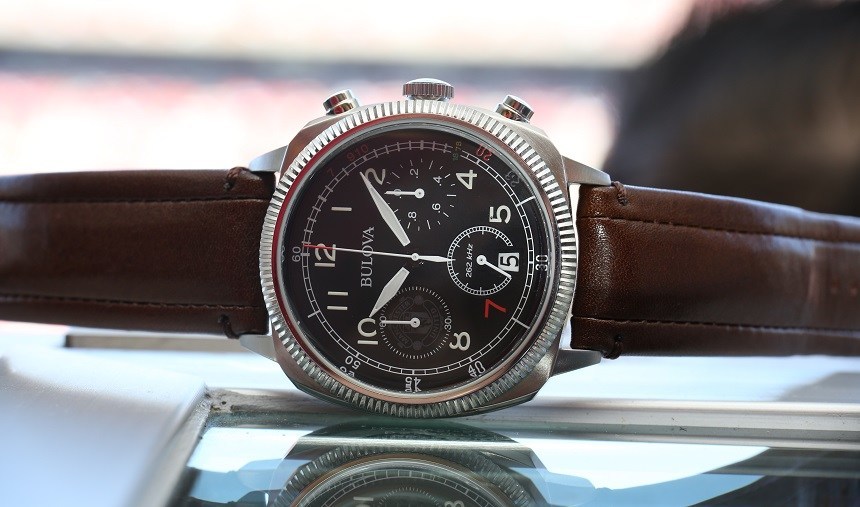 The Bulova Manchester United Club watch is a history book for the wrist. If you happen to find yourself embroiled in the football (soccer) round of any half-decent pub quiz, the hidden clues on the face of the watch could very well steal you first prize. Manchester United was founded by a group of railway workers as Newton Heath LYR Football Club in 1878. In the early days, the kit changed frequently, but Newton Heath are most remembered for playing in their distinctive green and gold shirts (hence the commonly seen green and gold scarves in the stands of Old Trafford, Manchester United’s home stadium). In 1902, the club changed its name to Manchester United and settled on the red, white, and black we commonly associate with the team. Green and gold effects still proliferate amongst anti-Glazer fans, who objected to the billionaire’s purchase of the club in 2005. 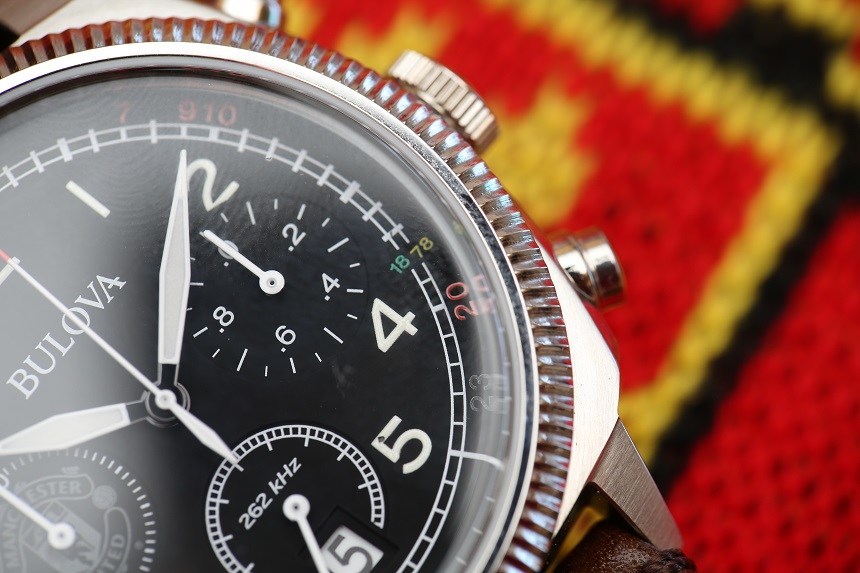 At the 18 (or 78) minute marker of the Bulova Manchester United Club watch, the date 1878 is printed in green and gold. This is a very clever (and massively convenient) nod to the club’s origins. In reference to the railway connection, a stretch of train track runs around the edge of the dial between the 12 hour and 18 minute markers. This reminds us of the import part played by the Lancashire and Yorkshire rail system in the development of Manchester during the industrial revolution. 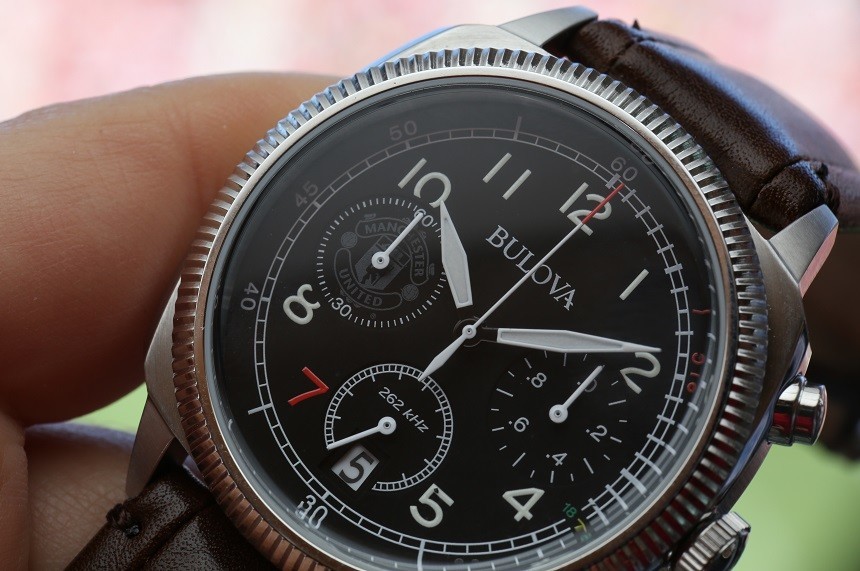 The minute marker at 23 minutes is blacked out in commemoration of those who lost their lives in the 1958 Munich air disaster, which claimed eight players and 15 other souls. Happier times are marked by the bold, red seven o’clock hour marker, which pays homage to the many world class number sevens that have donned a United shirt. And again the number seven, along with numbers nine and ten, is referenced by minute markers highlighted in red: These three jersey numbers were worn by United’s “Holy Trinity,” of Best, Law, and Charlton. The 20 minute marker is also picked-out in red to celebrate the number of league titles won by the club in its history – the most of any English team. 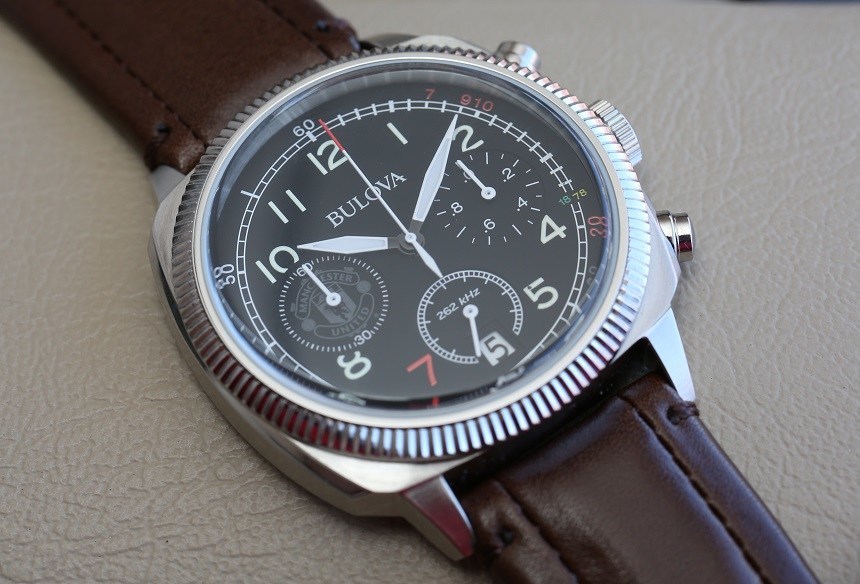 As well as all of these intriguing subtleties, more obvious attempts at club branding can be seen on the dial and the crown of the Bulova Manchester United Club watch. The famous crest, which has been a staple on the shirts since 1971, decorates the nine o’clock sub-dial, and the Devil (affectionately known as “Fred the Red” by fans), can be seen on the winding crown. 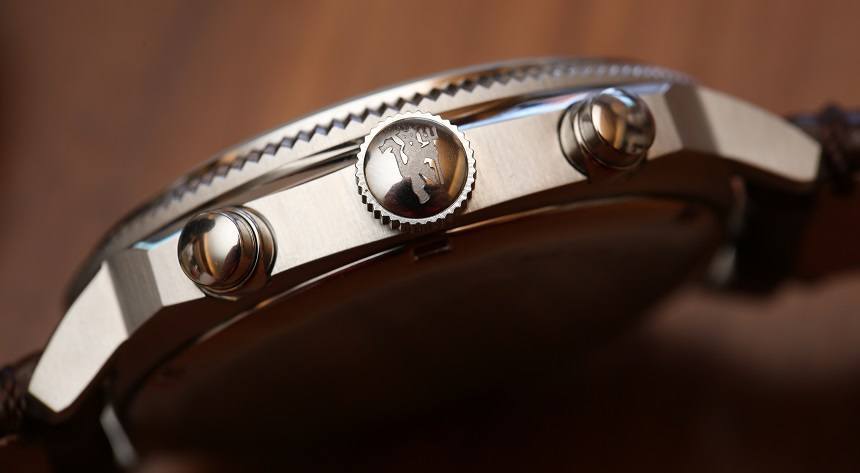 I think the crown looks excellent. With co-branded collaborations of this nature, it is easy to end up looking a bit cheap. The Devil logo, however, is crisp and clean, it works well as a monochromatic design, and looks very much at home on the crown. Additionally, the leather strap is made of vintage leather to reference the material used in the construction of early footballs. 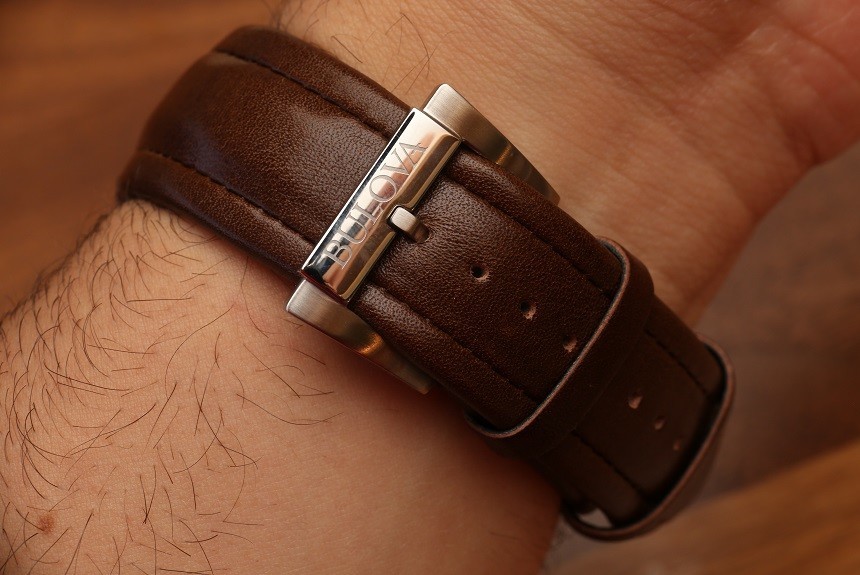 The Bulova Manchester United Club watch is powered by Bulova’s own UHF high-performance quartz movement. The watch boasts a specially-cut quartz crystal (adding a third “finger” to the normal two-pronged tuning fork shape found in traditional quartz watches). This means that the crystal oscillates at an “Ultra High Frequency” (UHF). Because of this, the second hand is able to “sweep” (actually moving 16 times in a single second as opposed to the one-tick-per-second one would normally associate with quartz technology). What it does is make the Bulova Manchester United Club watch appear like an automatic from a distance, and add a pleasing aesthetic quality to an already handsome piece. 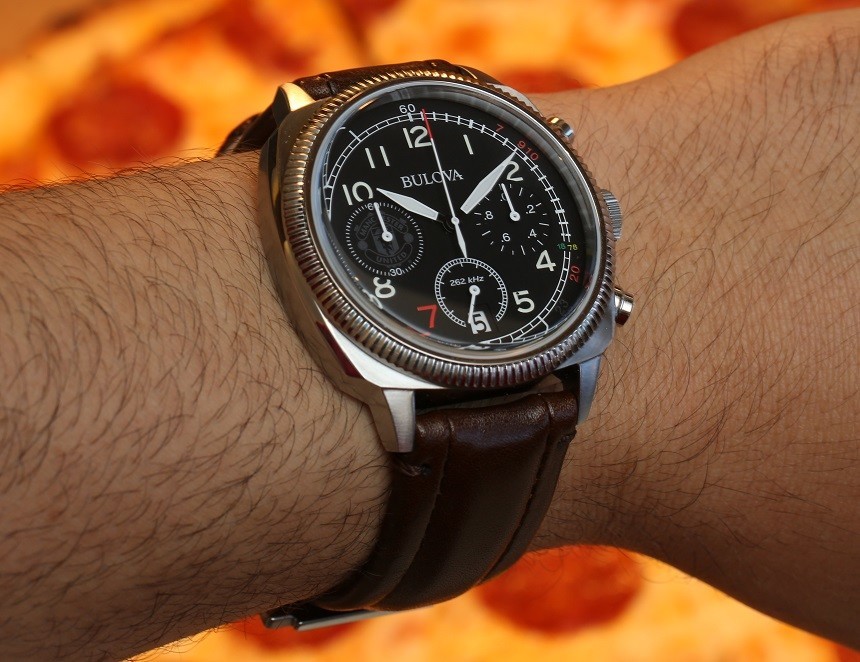 The Bulova Manchester United Club watch has 43mm stainless steel case that is water resistant to 100m. It has a vintage, cushion-shaped style with a fluted bezel. All in all, a very retro watch with a very modern movement. I am not in love with the end result, but with a price of $499, this Bulova Manchester United Club watch will find many fans and has a bucket-load of crossover appeal. bulova.com