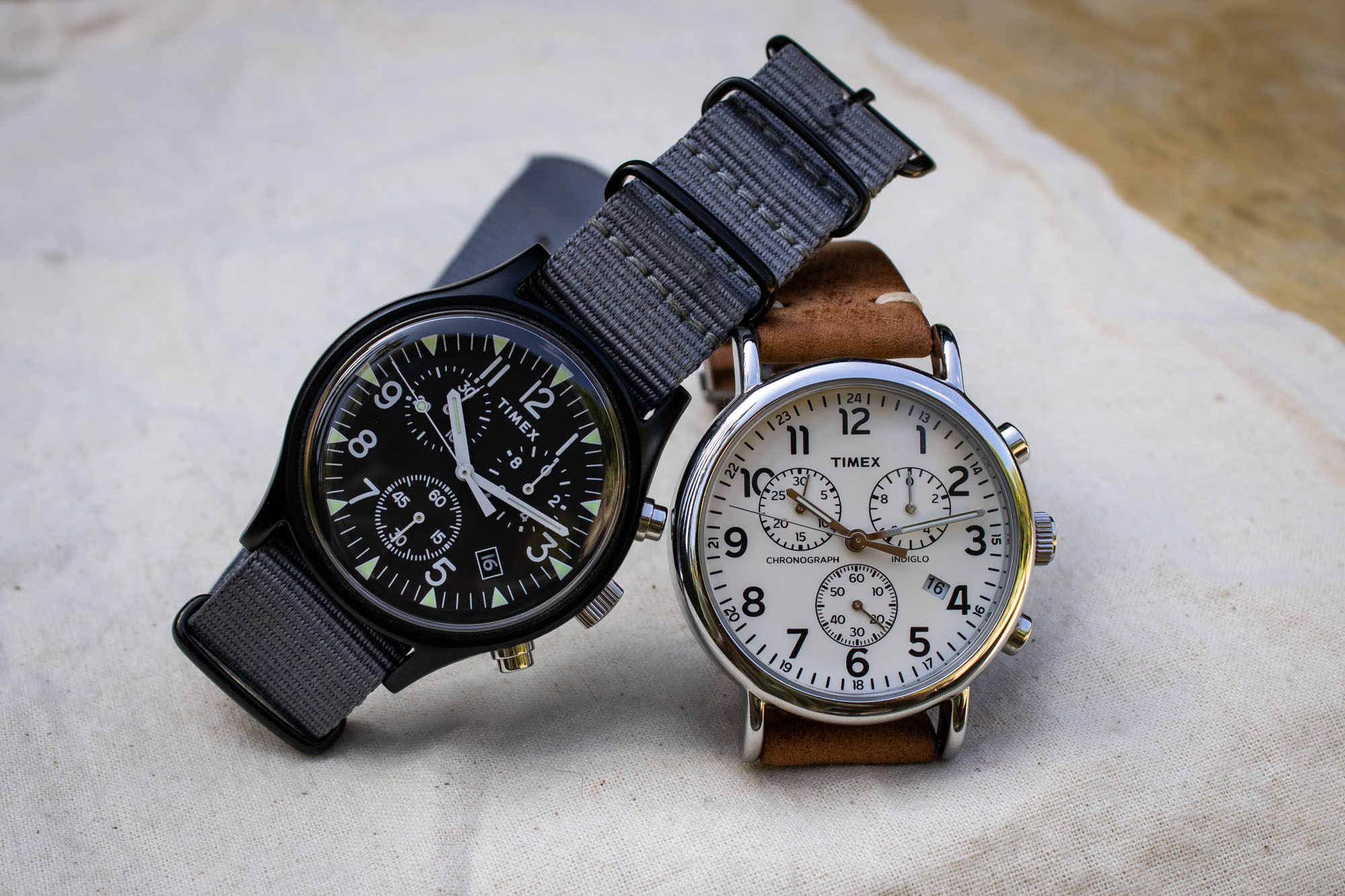 I often like to say that there is no such thing as a truly affordable mechanical chronograph. As crazy as this statement might sound, it actually starts to make a bit more sense when you look at the true cost of a watch as more than just the up-front money that is required to purchase it. Although it is certainly possible to purchase a mechanical chronograph for as little as a few hundred dollars, the quality of these bottom-dollar offerings can sometimes be a bit hit-or-miss, and the first time that you need to service your watch, it instantly becomes significantly less affordable. Given that they are quite a bit more complex than traditional three-handed movements, mechanical chronographs are inherently rather expensive to service, and you may find that your budget-friendly watch doubles or triples in price as soon as it needs a trip to the watchmaker. 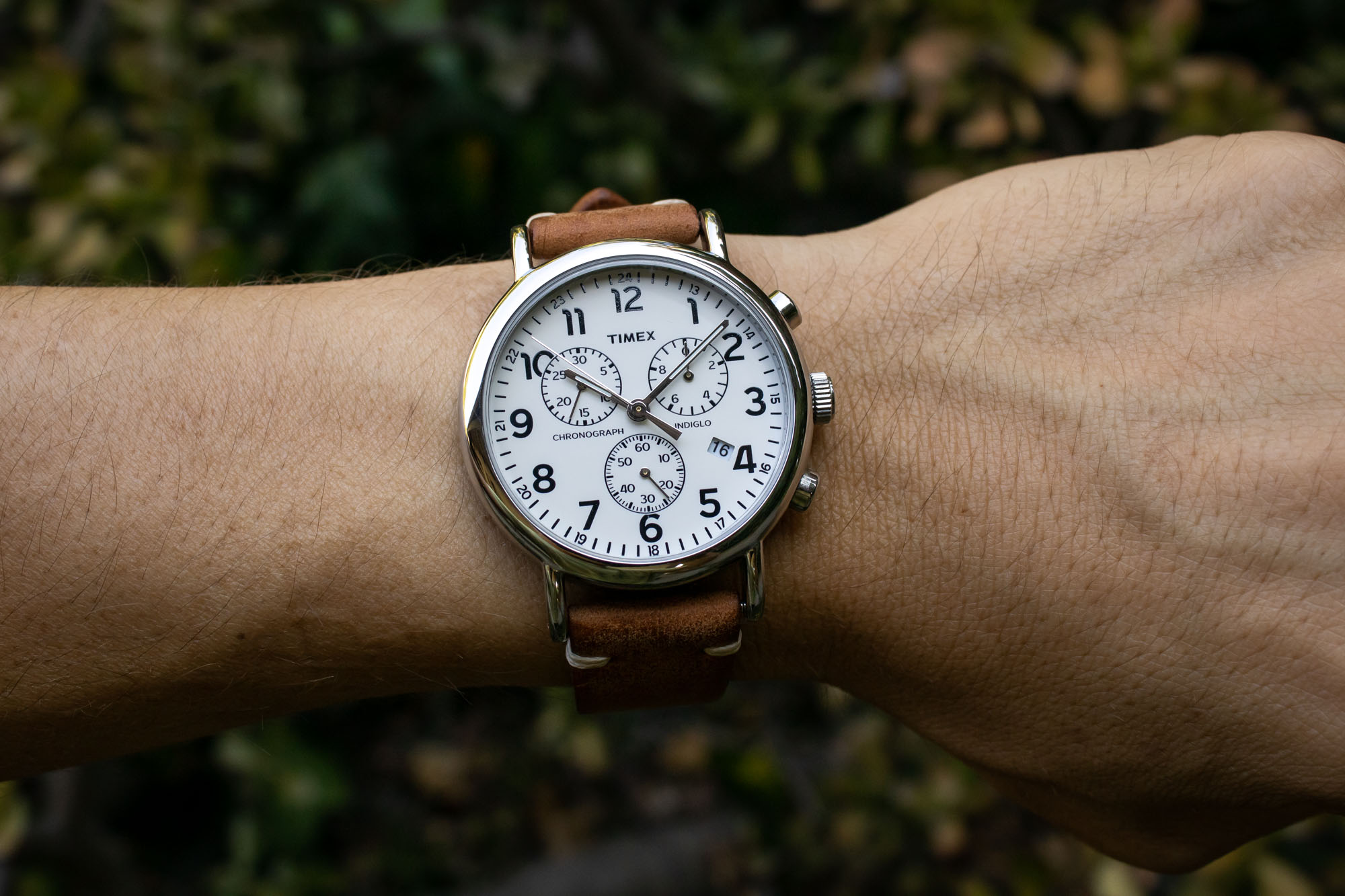 It’s not entirely fair to factor the cost of service into the overall price of a watch, but maintenance is an inevitable part of ownership, and buying a replacement movement isn’t nearly as easy or affordable when you’re dealing with a mechanical chronograph. Realistically speaking, if you are looking for a reliable analog chronograph at a rock-bottom price, you will more than likely want to find something with a quartz movement. At this point, you open an entirely different can of worms, since there are quartz chronographs that can be purchased for less than a few rounds of drinks at your local bar, along with a number of truly standout options that exist around the several hundred dollar price point. Additionally, functionality can range dramatically between quartz chronographs, and the “best” option for one person may not be ideal for another who has a different set of requirements from their watch. That said, some of the truly affordable options within this space that I feel rarely get enough attention from the general collector and enthusiast community are the various Timex chronograph watches that comprise a core component of the brand’s catalog and can be found in an incredibly wide range of different sizes, styles, and even materials. 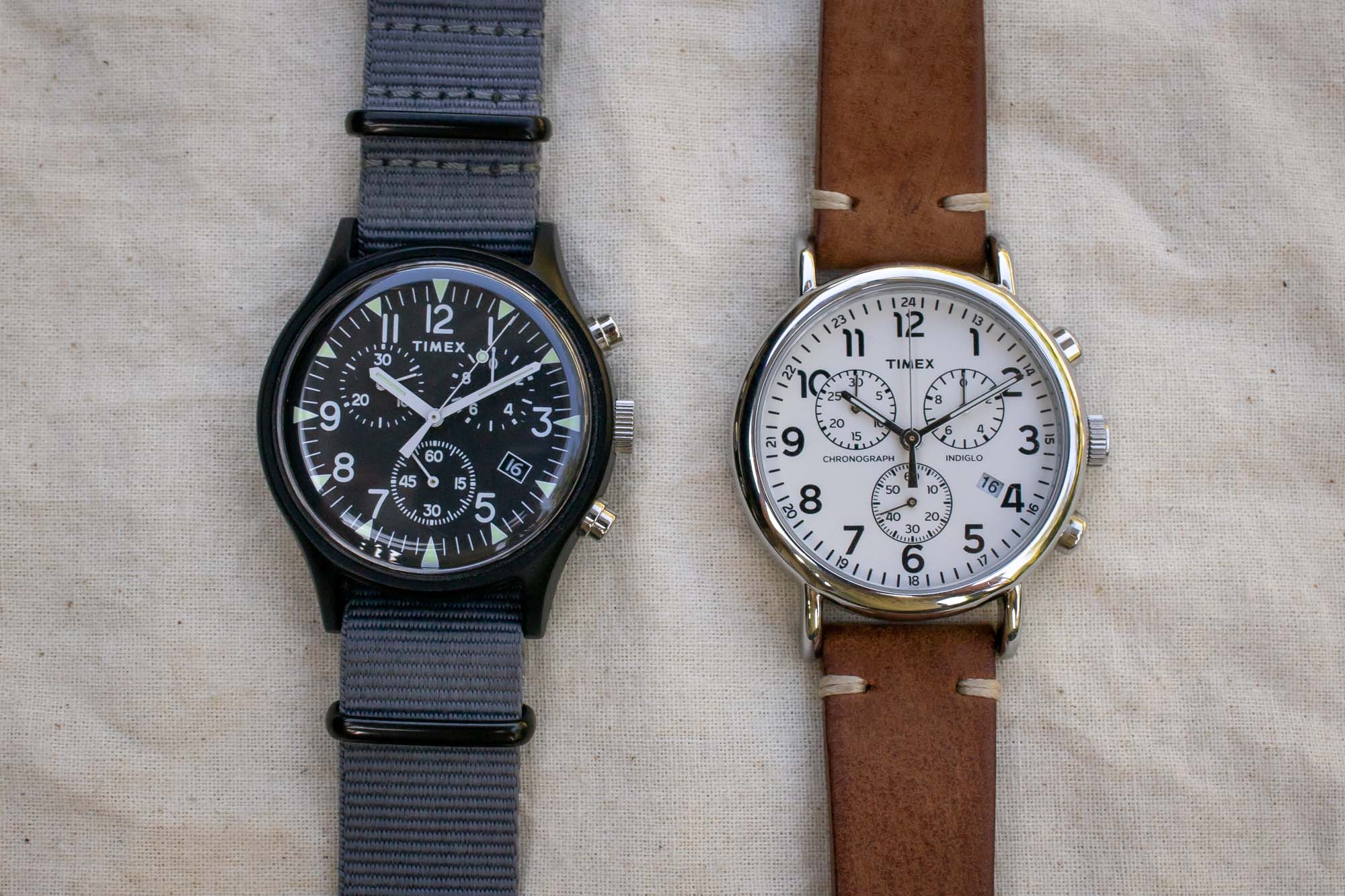 Most of Timex’s watches feature brass cases that are either chrome-plated or given some type of a dark-colored surface treatment. However, Timex also produces a number of slightly more premium models, such as those within the Waterbury collection that have stainless steel cases, and the brand has even experimented with other case materials, one of my personal favorites being aluminum. When it comes to Timex chronographs, most models have cases with sizes that range between 40mm and 42mm, and the brand sticks to even-sized lug-width measurements of 20mm or 22mm, which makes finding additional strap options simple and easy. Furthermore, the crystals fitted to the Timex’s chronographs can either be mineral glass or acrylic depending on the specific design of the watch, and most models feature a simple snap-on style caseback made from stainless steel, which is conveniently engraved with the type of battery that the watch requires. 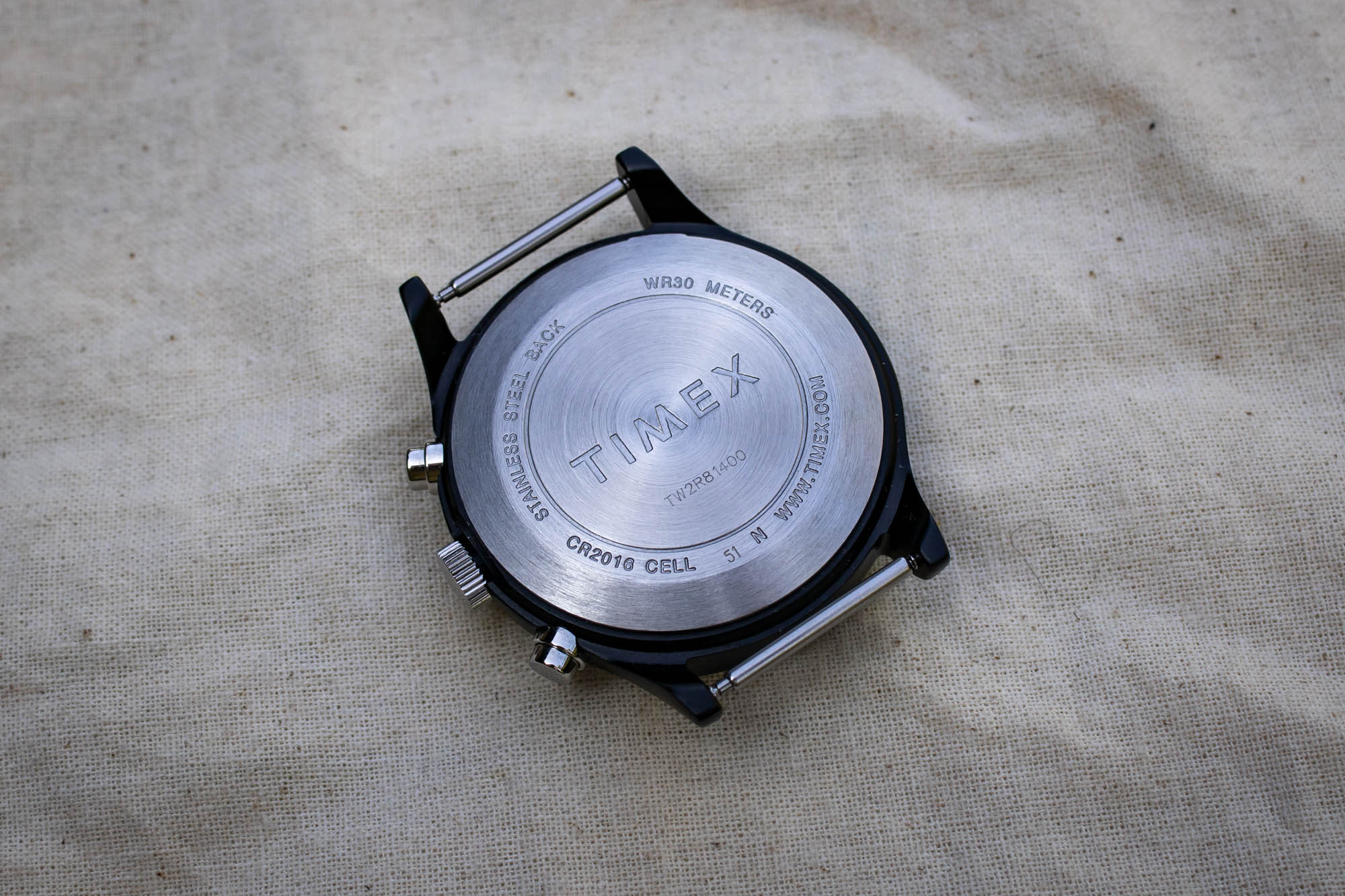 Despite a wide range of different styles, all of the chronograph models from Timex’s core collection follow the same general dial layout with a trio of chronograph registers and a date window placed at the 4 o’clock location. The subdial at 6 o’clock serves as a running seconds indicator that works in conjunction with the centrally mounted hour and minute hands, while the other two sub-dials are dedicated to the 30-minute chronograph, which can measure times down to 1/20th of a second. The standard dials fitted to the entry-level Timex chronograph models are simple but well-executed printed designs that allow the brand’s electroluminescent Indiglo technology to glow through the surface when the crown is pressed inward. However, some of the more elevated models forgo the utility of having Indiglo in exchange for being able to offer more involved dial designs that would otherwise not be possible while still being able to allow light to pass through them. 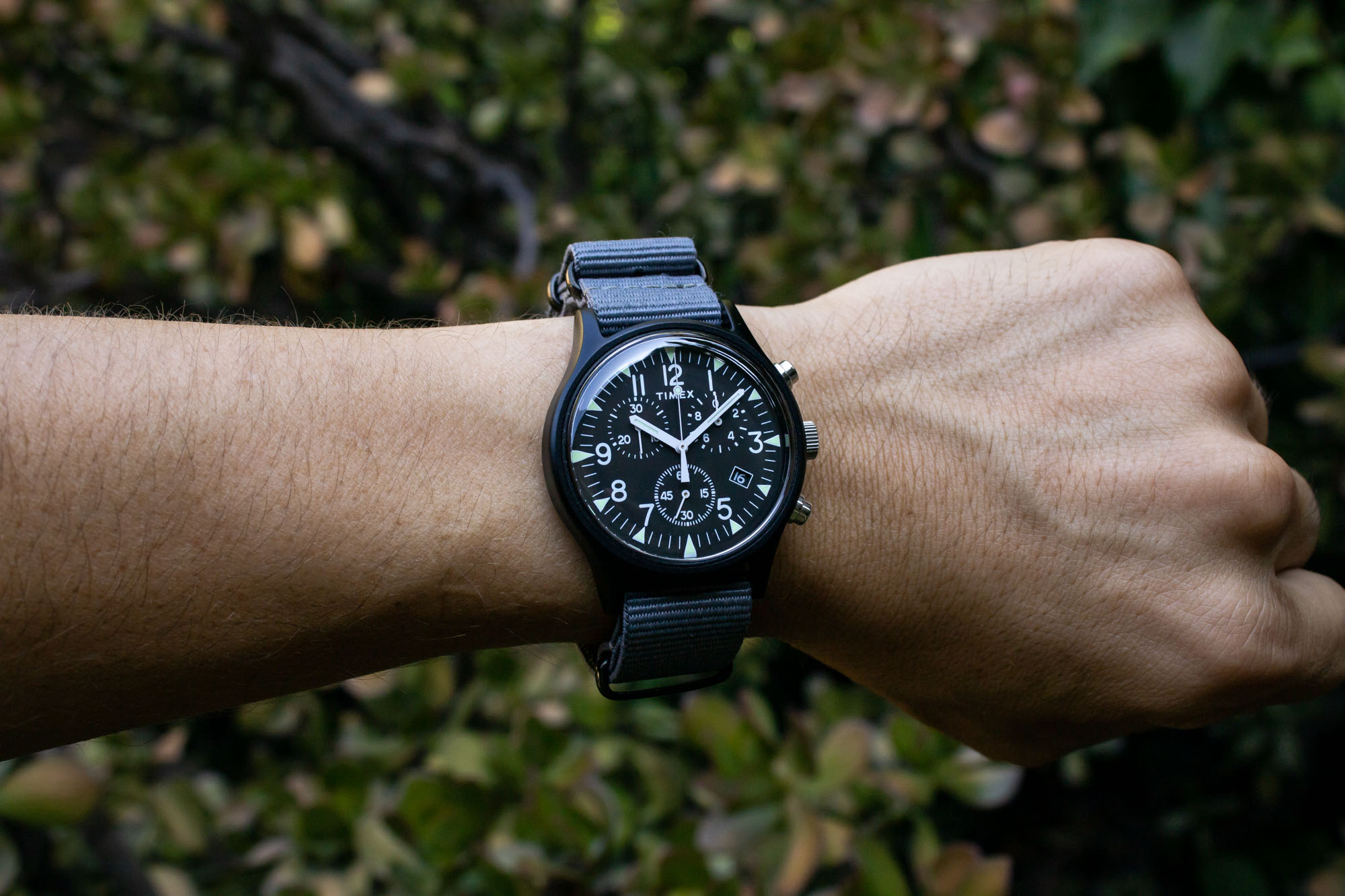 Although Timex’s cases and dials offer plenty of variety and are entirely satisfactory at this price point, the real reason why I feel that the brand’s chronographs deserve more attention is due to the movement that can be found inside them. Battery powered and benefitting from all the accuracy and grab-and-go convenience of quartz timekeeping technology, the movements fitted to the standard Timex chronograph watches are hardly high-end watchmaking, but they do feature 30-minute stopwatch functionality that can measure times down to 1/20th of a second. When you stop the chronograph, the sub-dial at the 2 o’clock location jumps to the value of the corresponding partial seconds, while the register at 11 o’clock displays the accompanying minutes, with the seconds indicated by the centrally-mounted chronograph hand. For me personally, I would have preferred to have an hour totalizer rather than a 1/20 second counter, but a surprising number of quartz chronographs don’t actually have the ability to record hours, and this is not a deal breaker for me at all, especially at this price point. Additionally, on the Indiglo-equipped models, pressing down the crown will activate its electroluminescent Indiglo feature, which lights up the entire dial from behind with a blue/green colored glow. 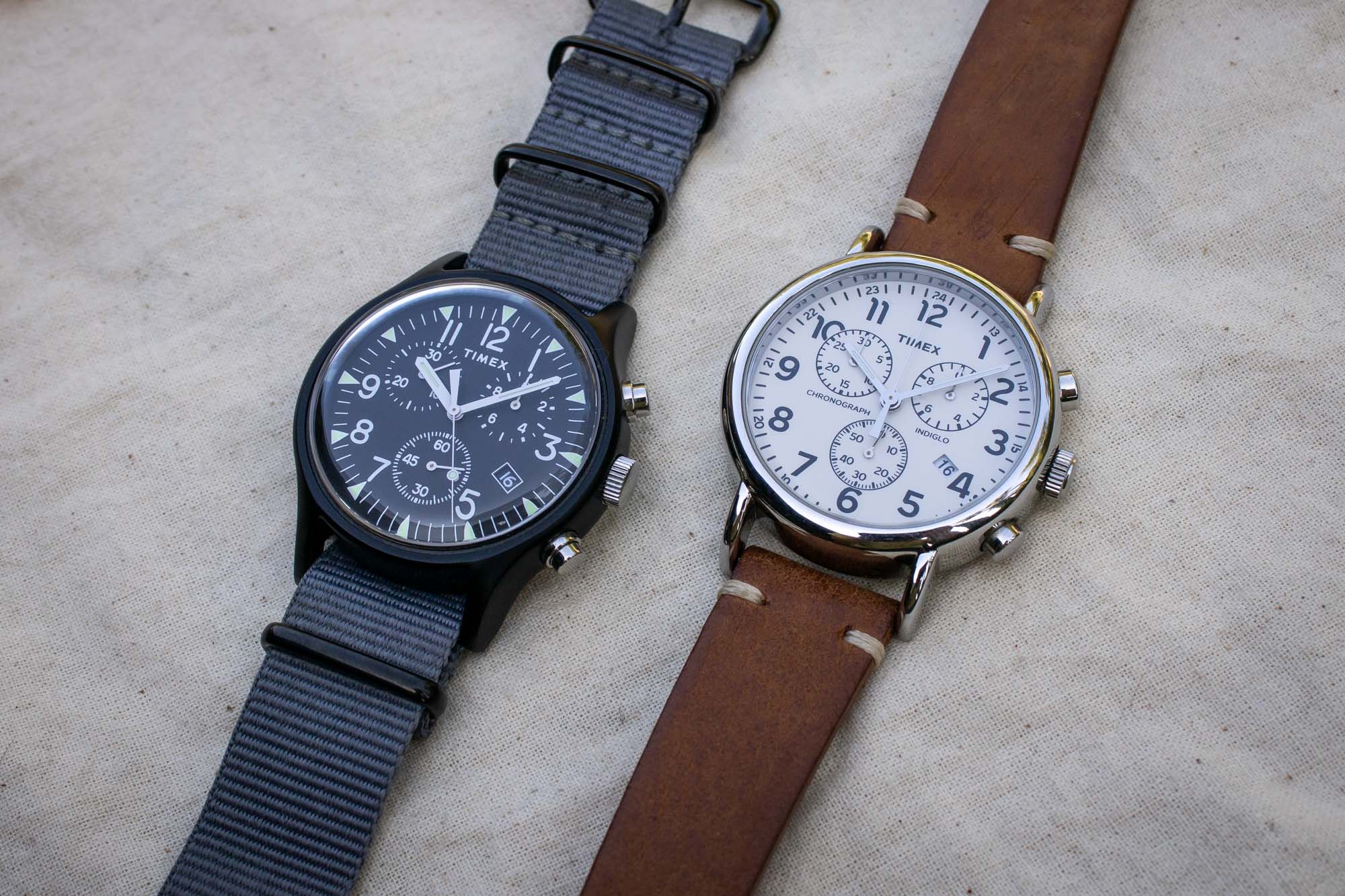 All that said, the single feature about Timex’s chronograph movement that impresses me the most is that it features an independently adjustable hour hand. Similar to the functionality found on a true GMT watch, pulling out the crown and rotating it in the first position will adjust the hour hand rather than the date display, and this will allow you to jump the hand either forwards or backward in one-hour increments. Additionally, as you move the hour hand past midnight, the date will change accordingly, meaning that when you adjust your watch to correspond with either daylight savings or a different time zone, the calendar display will also change to reflect the date in your current location. One of the key benefits of this feature is that it allows Timex’s chronographs to be adjusted to display a new time zone without disrupting the actual timekeeping of the watch itself. Therefore, unless you specifically require that your watch be able to simultaneously display multiple different time zones, then there is really no need to own an actual GMT watch, and one of these ultra-affordable Timex chronographs makes the perfect travel companion that can easily be adjusted on the fly and comes with the added utility of having a built-in stopwatch. 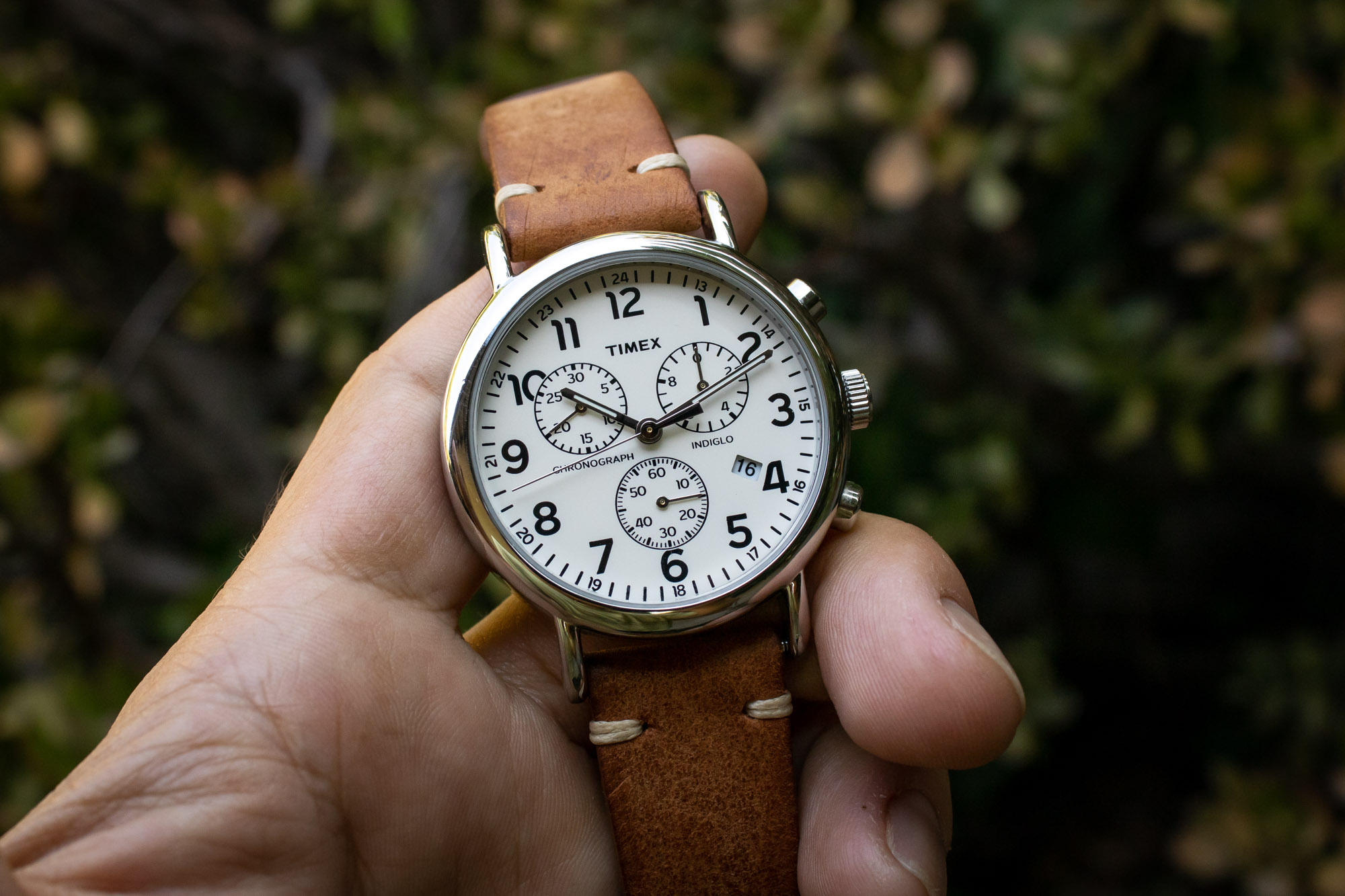 While Timex produces a fairly wide assortment of chronograph watches as part of its current catalog, you will also find many discontinued models still being sold by retailers, which significantly further expands the number of available options. Pictured throughout this article are two of the more basic Timex chronograph modes, which typically retail for right around a hundred dollars but can often be found for a significant savings by doing a few minutes of online research. It should be noted that neither of the two models is pictured on its original strap; however, I simply switched up their straps because I thought that these suited the watches better, rather than because the stock options were completely unwearable. All things considered, the straps that Timex includes with its watches are actually relatively decent given the brand’s budget-friendly price point, and you could happily wear the included option for quite some time until you eventually found something you liked better. 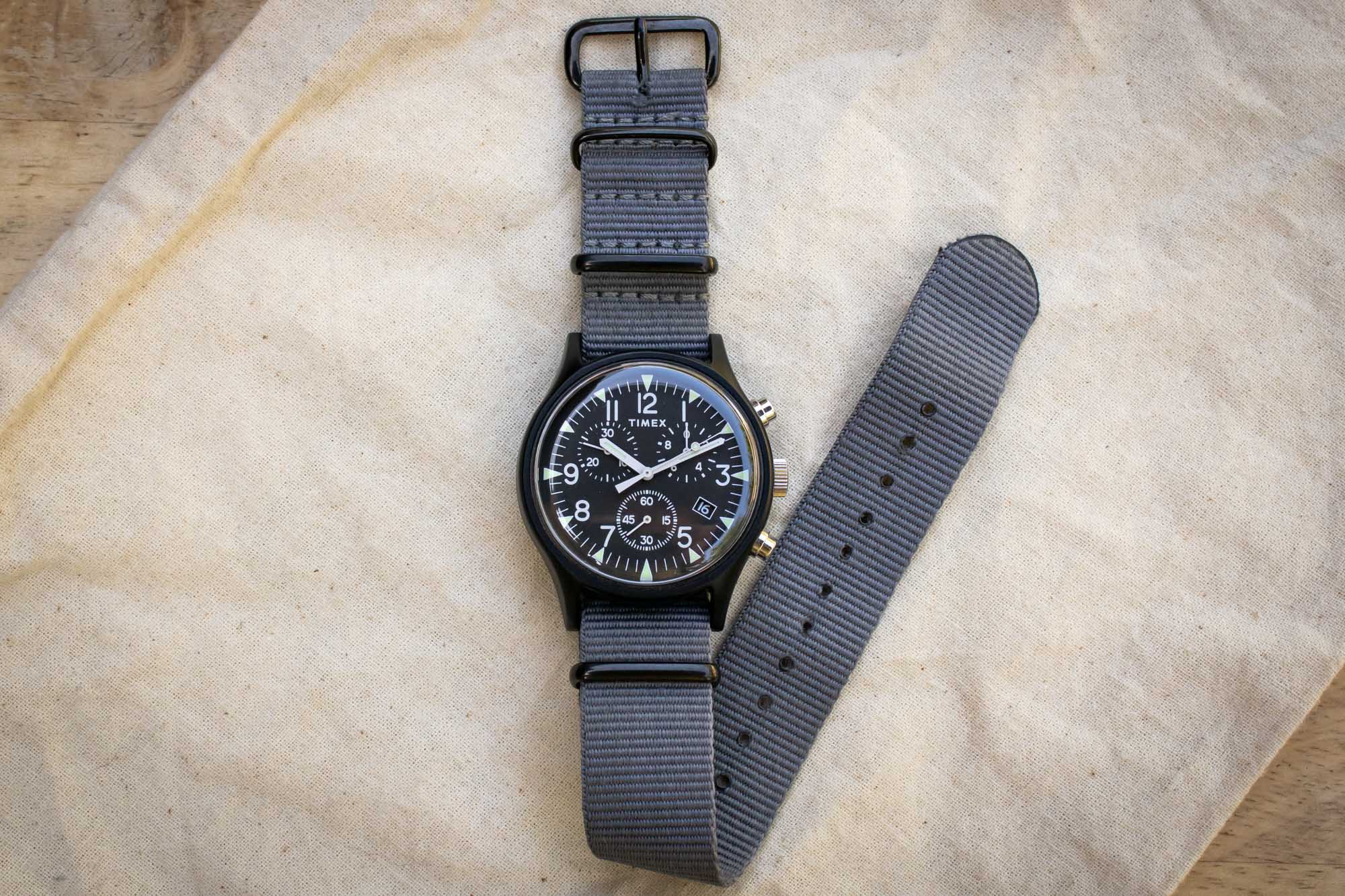 The Timex Weekender Chronograph is the stopwatch version of the brand’s standard casual timepiece, and it features a chrome-plated brass case fitted with a flat mineral glass crystal. Conversely, the Timex MK1 Aluminum Chronograph draws its inspiration from Timex’s vintage military watches, and it features a lightweight aluminum case that is fitted with a domed acrylic crystal. The version of the MK1 Aluminum Chronograph that I have is finished black, but Timex also produced other versions of this watch with different case colors. Despite the fact that both of these models offer identical functionality and have cases that both officially measure 40mm in diameter, each one offers a very different overall presence on the wrist. Although it currently shows up as “out of stock” on Timex’s website and seems to have potentially been recently discontinued, the MK1 Aluminum Chronograph is one of my personal favorites when it comes to Timex models that feature this particular movement. While a stainless steel case and a mineral glass crystal would undeniably offer a more premium look and feel, I appreciate the novelty of having an aluminum watch, and that novelty is even easier to appreciate when it costs me less than what many brands charge for just a replacement strap. 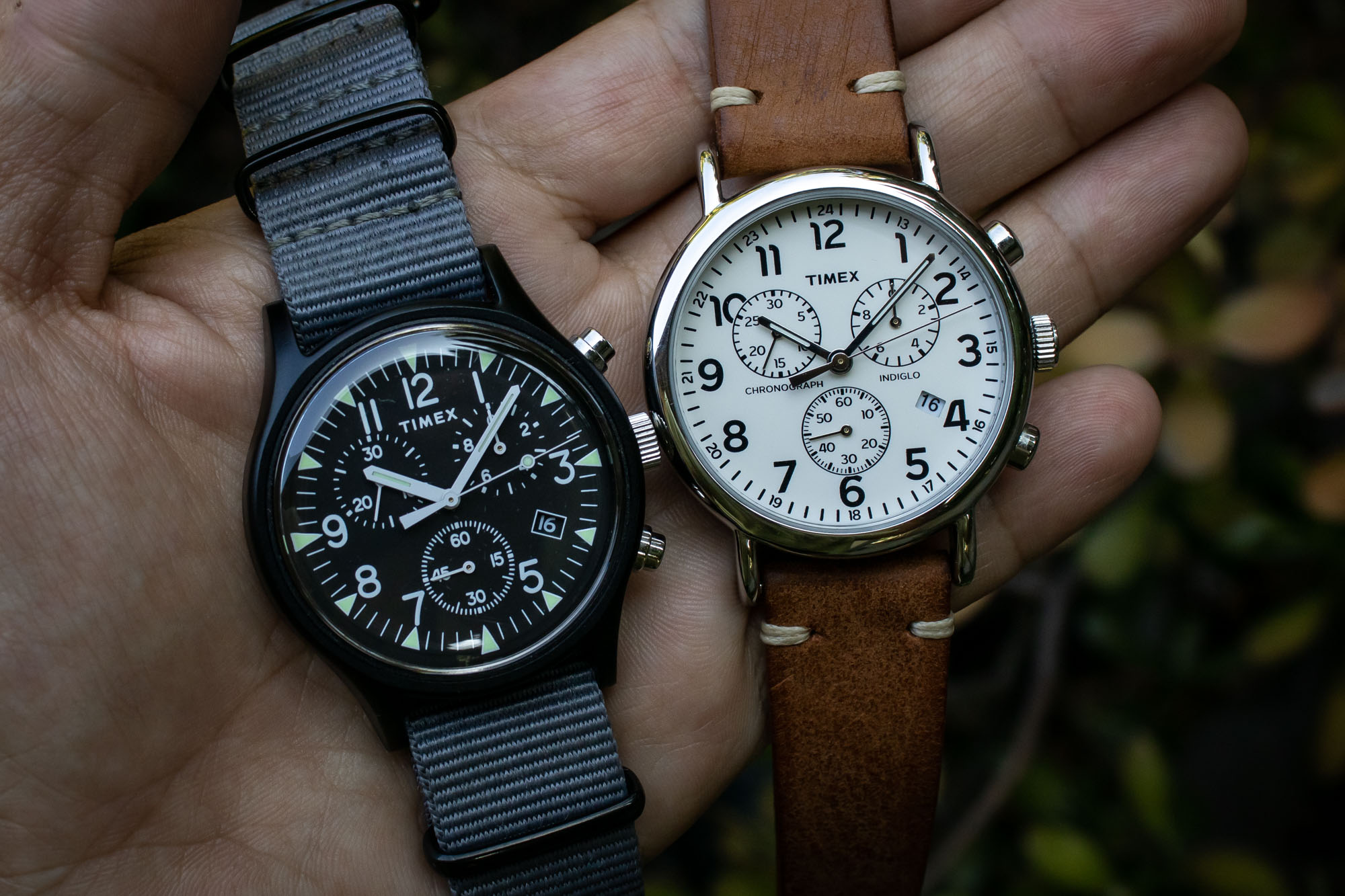 While they certainly don’t offer the same level of horological intrigue as a proper mechanical timepiece, Timex’s chronograph watches offer bottom-dollar access to popular chronograph styling and functionality, without committing you to any expensive service costs at some point down the road. Other than a simple battery replacement every several years, a Timex Chronograph promises a cheap and drama-free ownership experience, and with a simple press-fit style caseback, there are no worries about ever needing proprietary tools to simply open up your watch. While it should be noted that not every Timex chronograph is powered by this same feature-packed movement, the vast majority of examples do include it, and rather counterintuitively, you are actually most likely to find it fitted to Timex’s more affordable offerings, as it is the standard analog chronograph movement selected for the brand’s core-collection models. Are these Timex watches the absolute best budget-friendly chronographs available? Probably not; however, the concept of “best” is entirely subjective and it is undeniable that these bottom-dollar models offer quite a lot of functionality for the money — plus, they can be found in a wide assortment of different styles to suit your individual tastes and preferences.