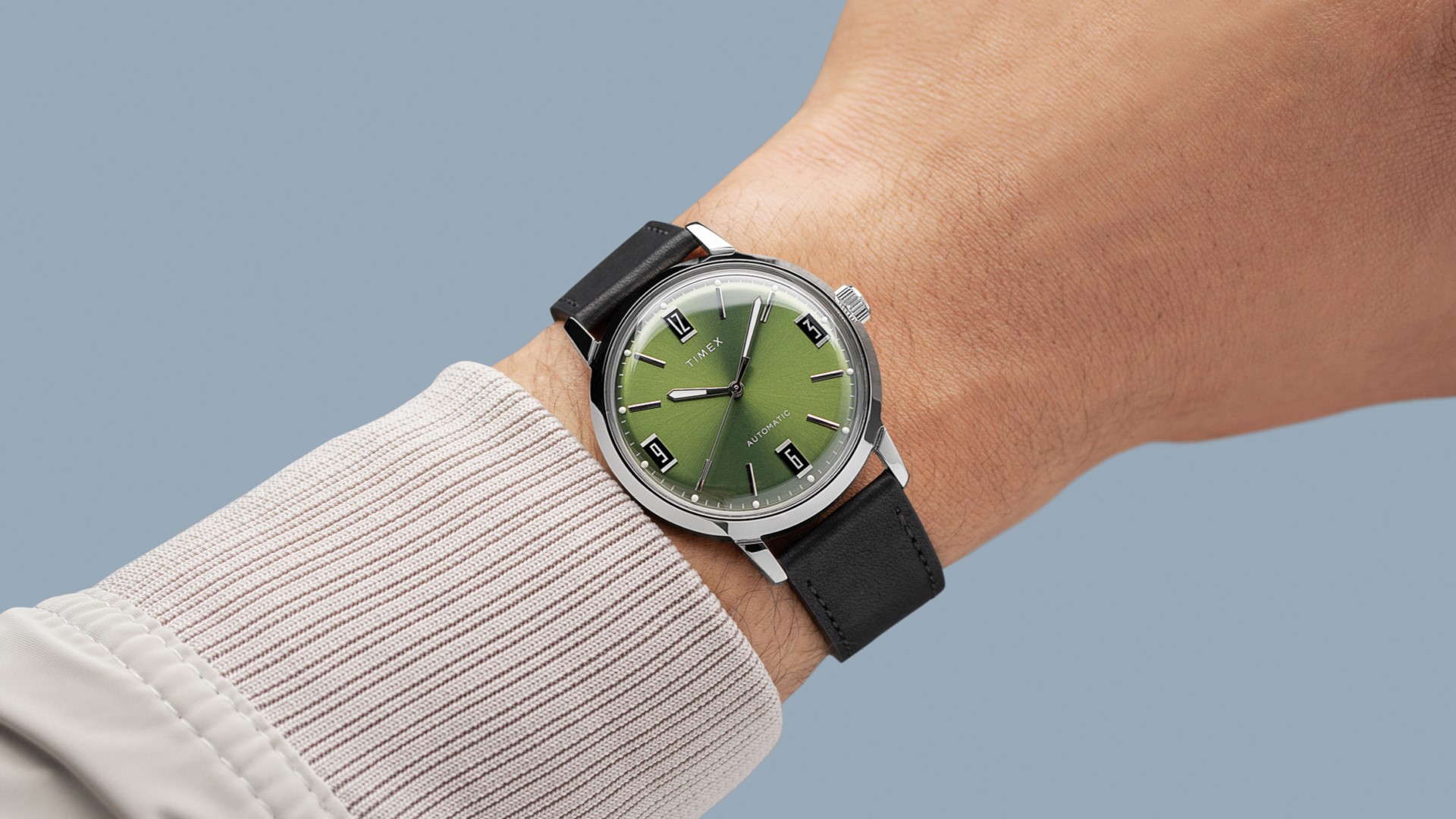 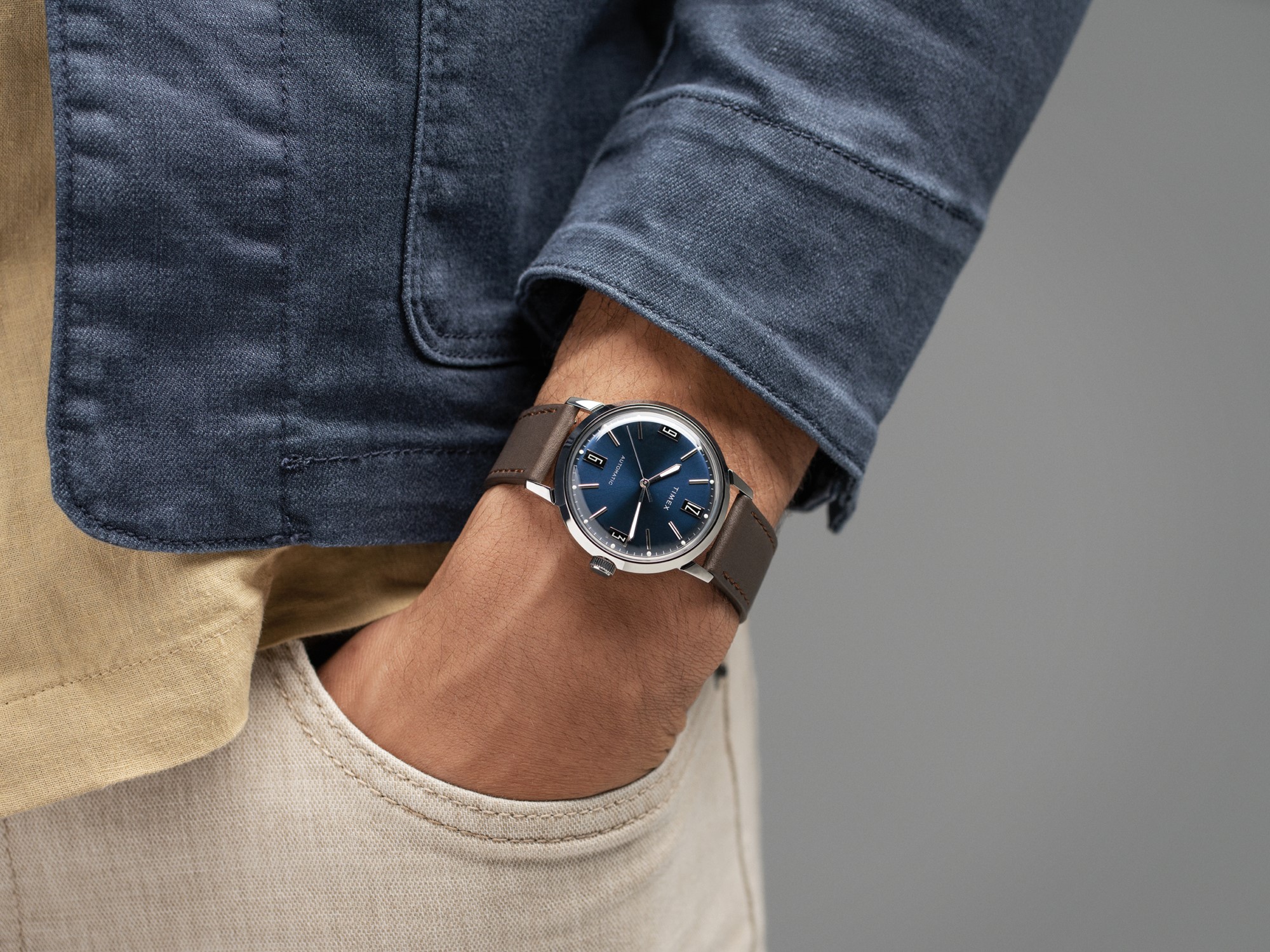 It’s beginning to seem like Timex has found some secret formula for exceptional releases. The hits just keep coming, whether it’s the brand’s Q line, Giorgio Galli collection, or its multiple collaborations. While Timex continues to produce cheaper mass-market quartz pieces, it’s clearly put considerable effort and money into watches targeted at enthusiasts. For the latest release, Timex has once again reached into its deep back catalog to add to the already enticing Timex Marlin line. This time, they’ve used a 1969 Viscount for inspiration. The Timex Viscount was a broad line of models produced from the early 1960s to the late 1970s, starting with a 1961 model made in Great Britain. Right in the middle of its production span, the Viscount from which the new model takes its inspiration was produced. It’s clearly a product of its time, with the original being available with gold-tone or chrome plating, a silvery champagne dial, and its unique cardinal hour markers with the numerals printed on them in a decidedly 70s font. As Timex has shown once again, it has been able to translate that design into a modern offering with very few changes. 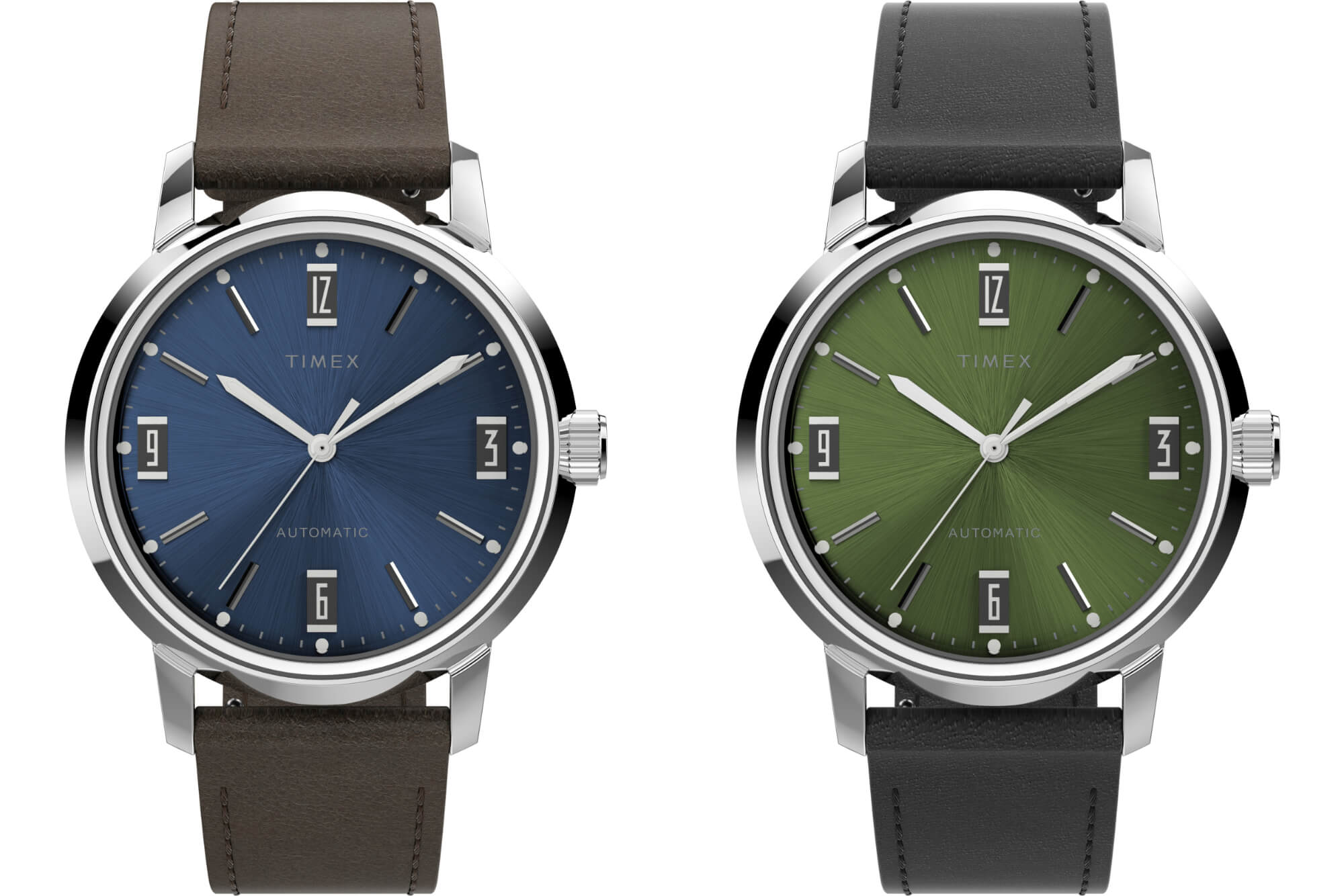 The new Timex Marlin Automatic makes a few concessions to modern tastes, which start, perhaps unavoidably, with the case size. The original 34mm case has been sized up to 40mm, with a 13mm thickness and 20mm lugs—the same as the case on all modern Marlin Automatics. The case is fully polished with a pull-out crown and 50m water resistance, which seem perfectly adequate for a watch of this style. Keeping with the vintage vibe, it features a massive domed acrylic crystal and a sloped bezel that continues the crystal’s curve. At 13mm thick, it’s not very slim for a dress watch, but the slightly sloped lugs and the curve of the crystal should help to mitigate that. And because people like to “see the spinny thing,” Timex has also added glass to the caseback, putting the movement on display. The strap on the watch is  quick-release black or brown leather sourced from S.B. Foot Tanning Company (the main supplier for Red Wing boots). 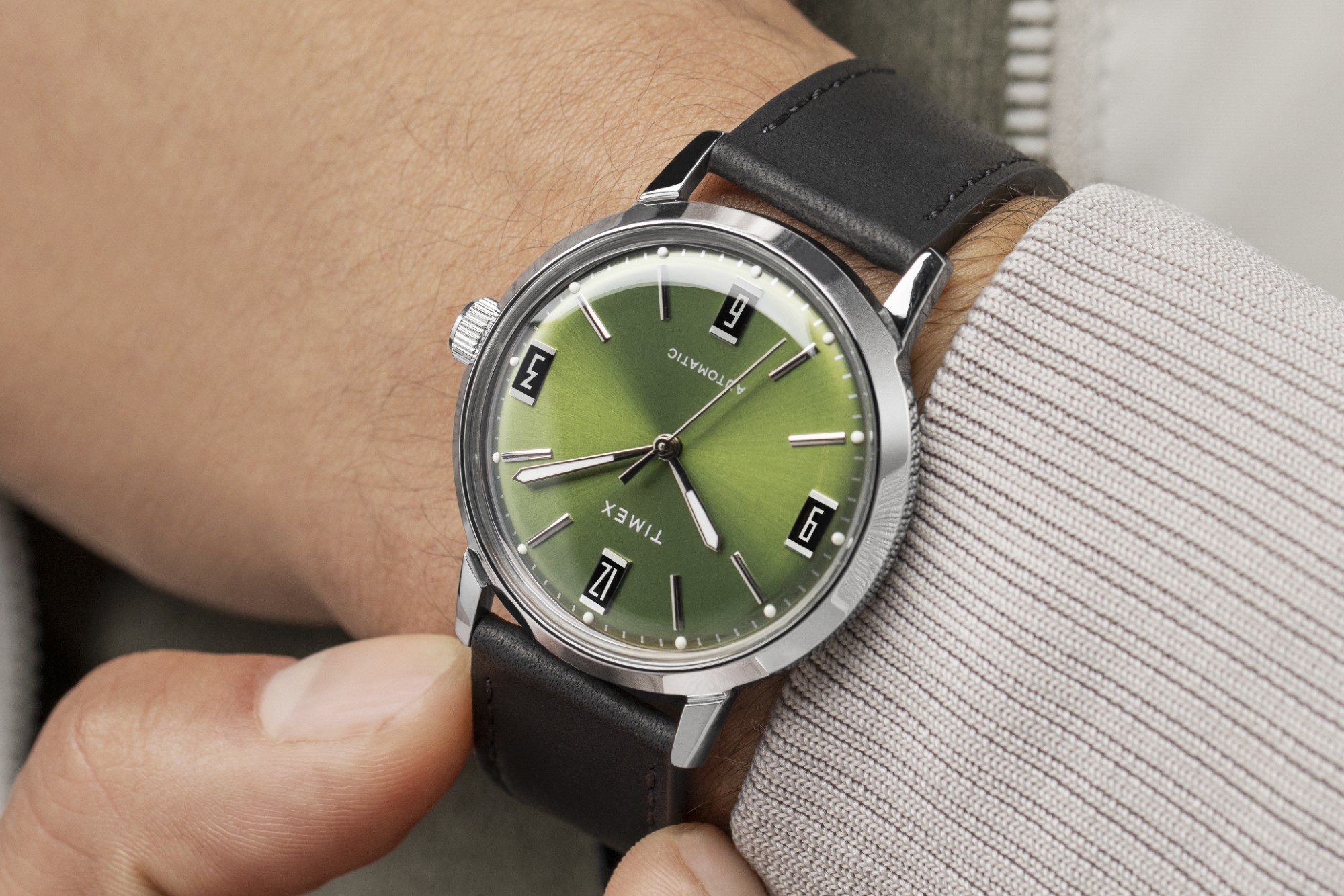 The dial is an unabashed love letter to its forebear. Aside from being scaled for a 40mm case, the only changes made were to offer it in blue and green and add lume to the hands. What remains is the polished sword handset, the sunburst finish, and the unique numerals. Certainly, the draw of this watch will be the numerals: Timex calls these “boxed” numerals, which is as good a way to describe them as any (I’ve seen “telephone numerals,” too, which I don’t entirely understand, but it sounds cooler). While uncommon today (perhaps the Zodiac Super Sea Wolf models are the closest you’d get), I’ve seen a number of run-of-the-mill vintage pieces done this way. The other markers are simple applied batons, and small lume pips and minute hashes trace the periphery. The dial of the new Marlin Automatic continues the vintage aesthetic of the collection, though, for me, this one leans a bit more into it, and for that, I’ll give plaudits. 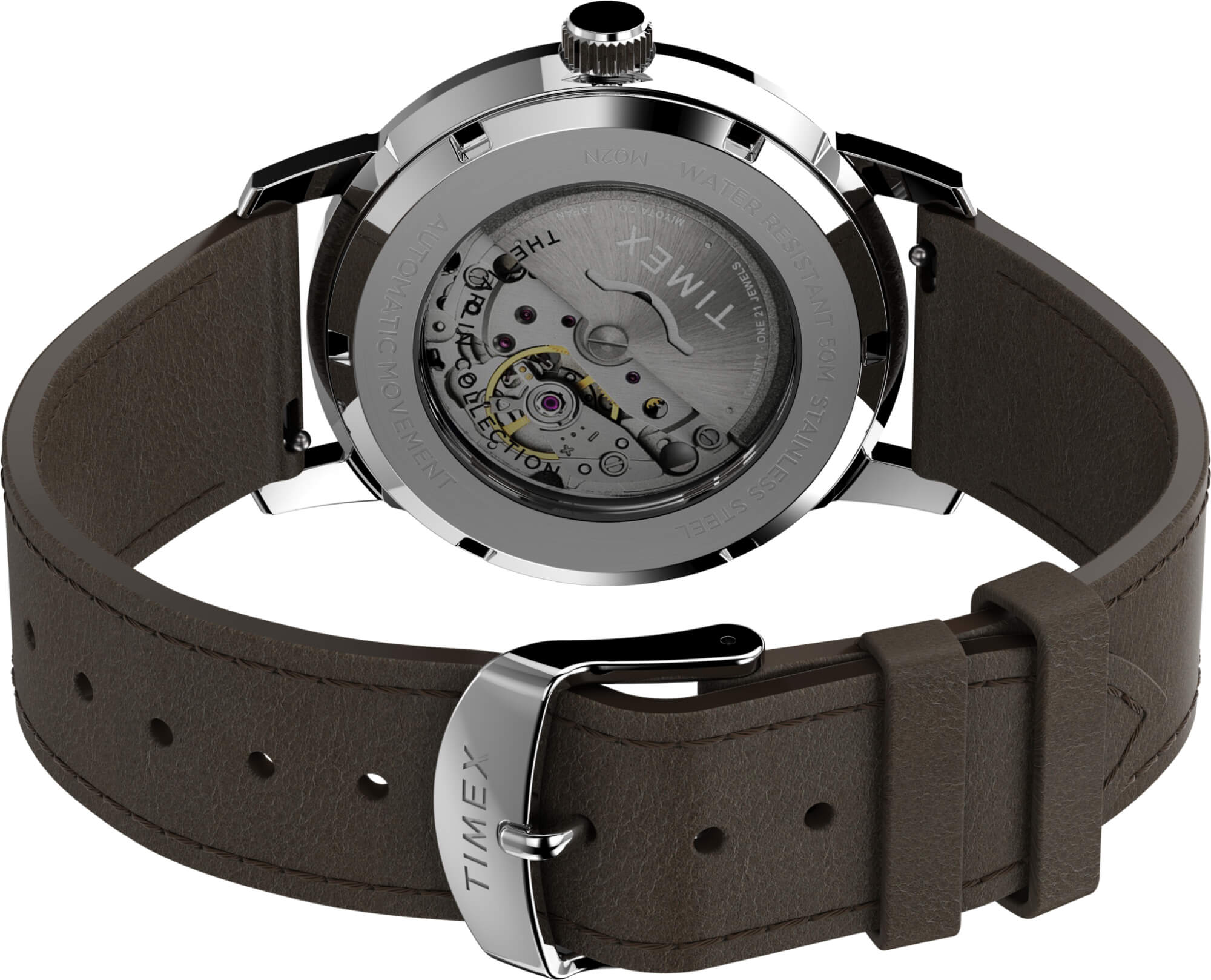 The movement in the new Timex Marlin Automatic is not clearly specified by the brand, but the rotor clearly says Miyota, which Timex has used for other recent releases (including the Giorgi Galli S1 and its collab with The James Brand). What we do know is that it has 21 jewels, which means it’s an 8000 series. All Miyota 8000 series have the same specs, just with different layouts: a beat rate of 21,600 vph, a power reserve of 42 hours (though Timex says 40), and factory accuracy of -20/+40 seconds per day. Even though the 8000s are Miyota’s entry-level offering, you also get hacking functionality for precise setting. Is it the best movement? No, but it’s proven to be reliable, easy to service, and, at this price point, quite a nice value.

While previous Marlin Automatics featured mostly silver, gold, or black dials, this new model expands the line by adding colorful dials and a bit of quirk. While other dials may have featured Snoopy, that can be a bit much for some customers, so the subtle design of the boxed numerals should strike the right balance. All in all, its another impressive reissue from a brand that seemingly cannot be stopped. The Timex Marlin Automatic is priced at $249. For more information, please visit the brand’s website.