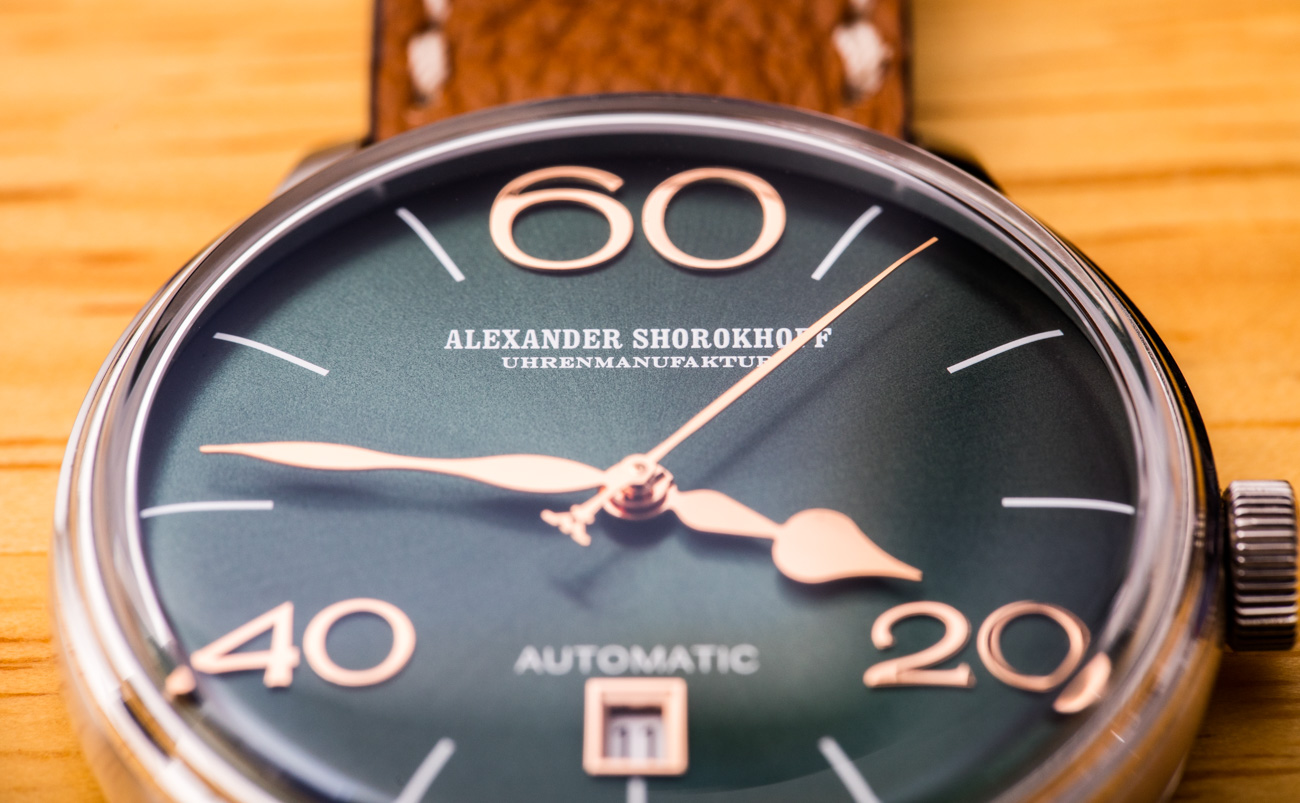 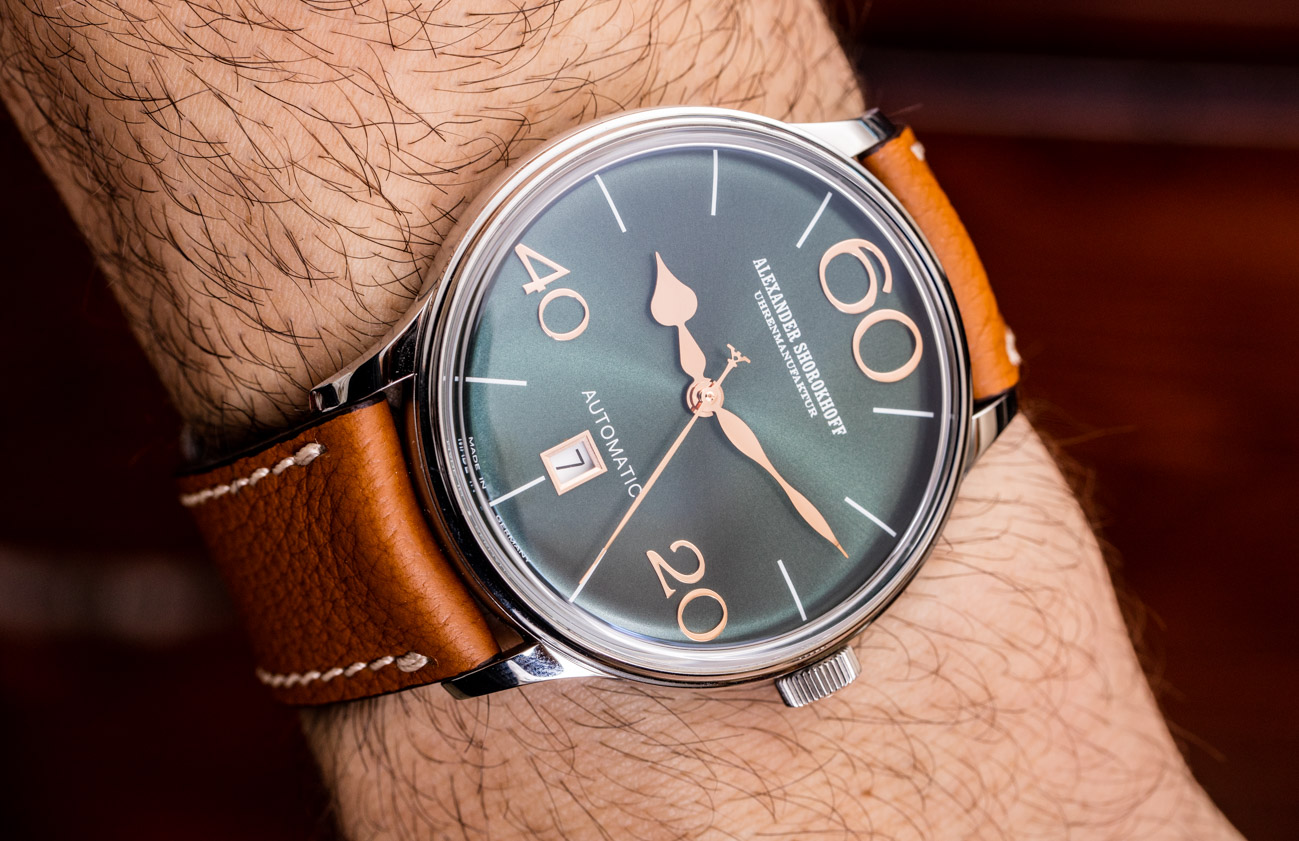 Russian-born Alexander Shorokhoff makes watches in Germany, offering some of the more interesting avant-garde yet still horologically worthy timepieces out there. This isn’t my first look at an Alexander Shorokhoff timepiece, but this Model 63 (aka “Model Sixtythree”) is probably the least expensive product from the brand that I’ve reviewed, with a price well under $2,000. Let’s take a look at the dressy daily-wear Alexander Shorokhoff Model 63 watch, available with four dial colors and a thin wrist profile,

Alexander Shorokhoff claims that the Model 63 is inspired by 1960s thin-profile dress and casual watches. At the time (especially in Europe) watches were being produced in a dazzling array of colors and styles — a trend that peaked in the 1970s — I recall being in Glashutte, Germany in the town’s watch museum and being very impressed by the unpredictable level of fun and fashion built into watches produced under the restrictive communist regime after World War II and prior to German re-unification. 1963 would have been a middle point in East Germany’s existence, as well as a major point in the Cold War. Nevertheless, people seemed to look to their wristwatches for a bit of color and hope. 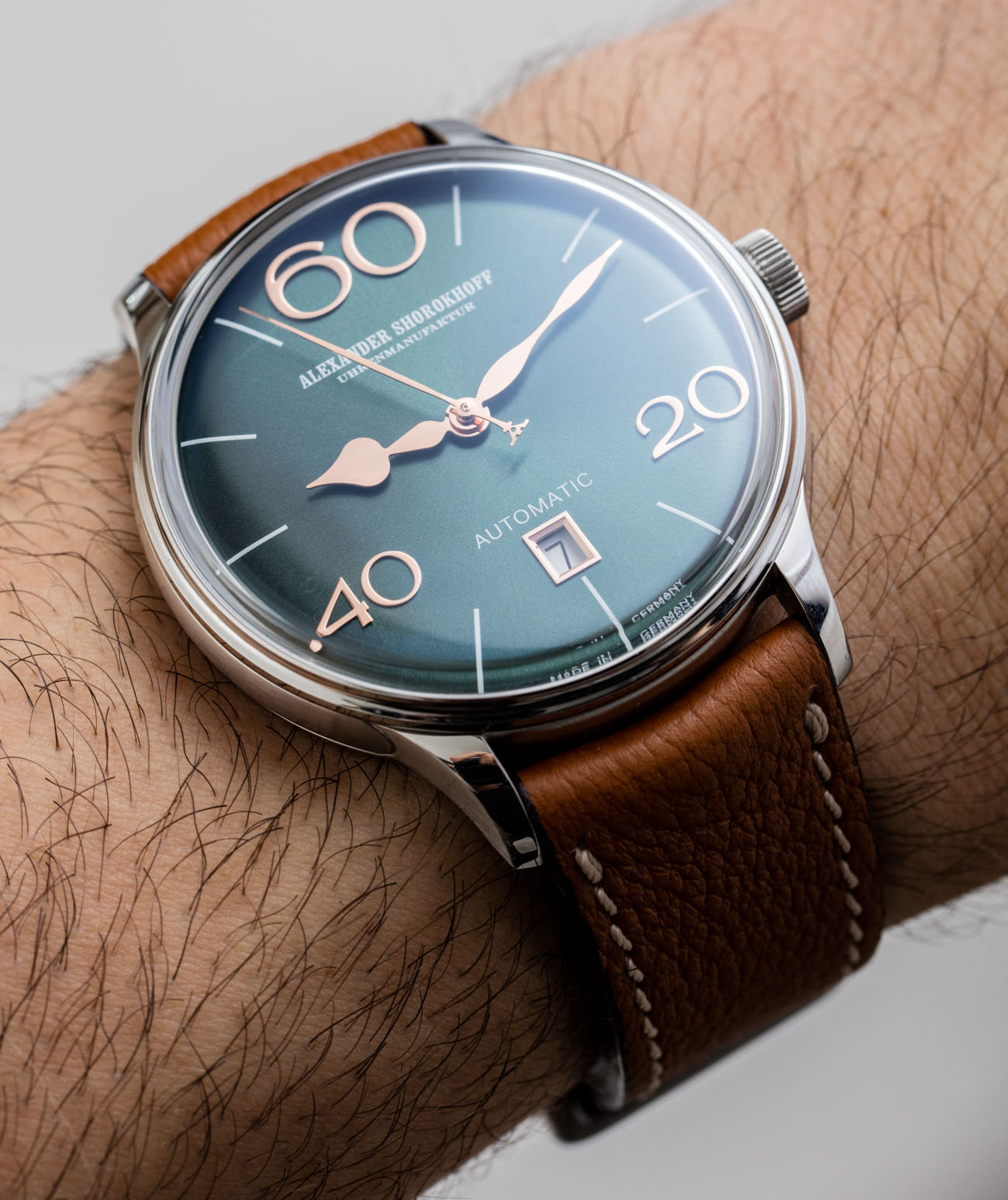 The Alexander Shorokhoff Model 63 has a dial that makes use of the brand’s signature face design, which includes large 60, 20, and 40 minute-style hour markers mixed with baton-style markers and “antique-style” hands. The case has a box-style sapphire crystal that sits over the dial, as opposed to next to a bezel. Such “bezel-less” watch cases are popular these days as nods to the past. This is because they allow timepiece cases to look larger than they are, and today can be produced from scratch-resistant sapphire crystal, whereas in the 1960s, such crystals would have been mostly produced from acrylic. 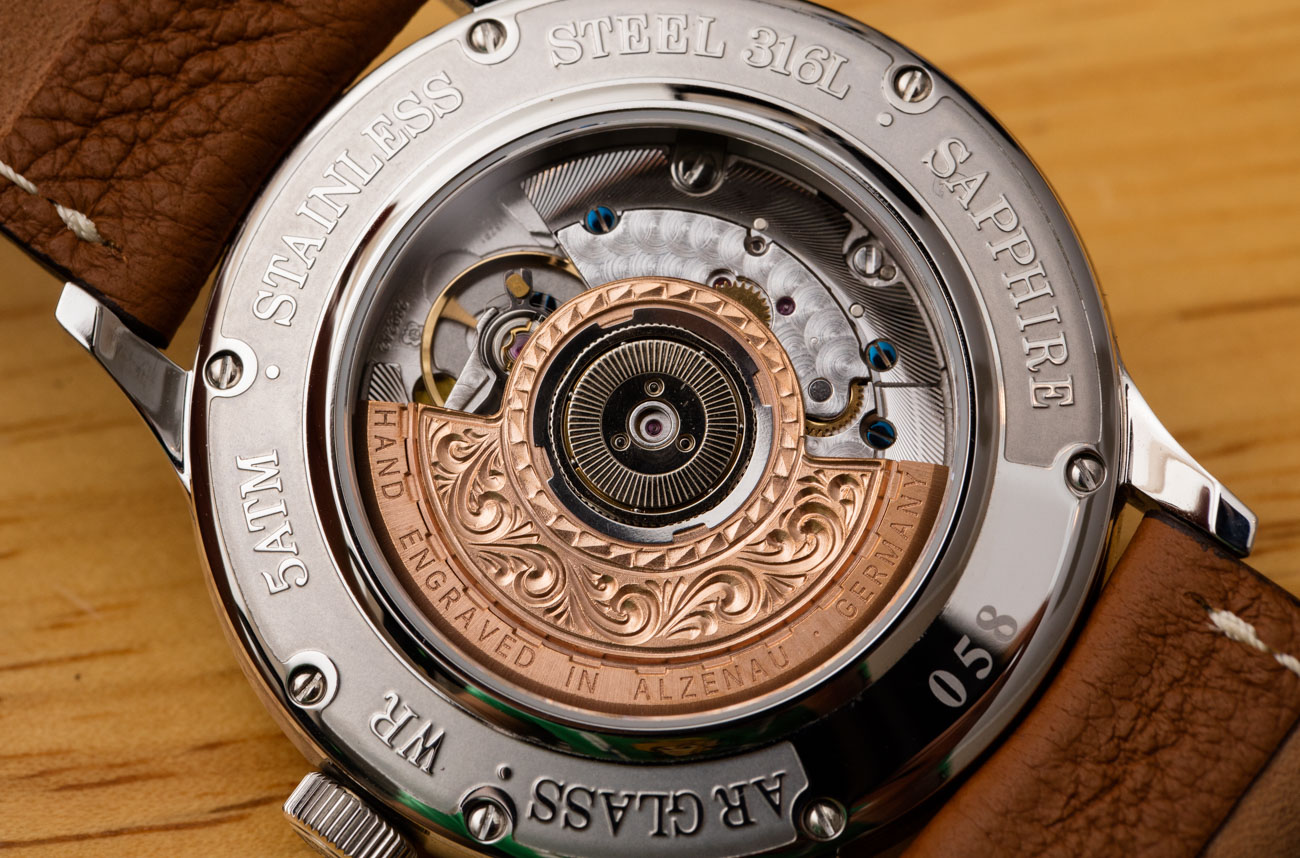 Of course the 40mm-wide steel case does have a bezel, but it is lower down on the case. A close inspection of the polished and brushed case reveals a carefully crafted design which, in my opinion, helps separate this type of causal dress watch from many others out there with comparatively generic case designs. Alexander Shorokhoff speaks about how “flat” the case is — but in reality, it is not super-thin 11.3mm. That does not, however, make it a particularly thick watch — for me, this is a really nice “just right” thickness for a casual dress watch that is 40mm-wide. The case is also water resistant to 50 meters (acceptable for a dressier watch like this without a screw-down crown).

Wearing comfort is enhanced by curved lugs as well as the supple light-brown leather strap. Also available for the Model 63 watch collection are other colors of leather straps (even those that match the dial color, apparently), as well as an available mesh metal “Milanese” steel bracelet. I continue to like the simple yet chunky Alexander Shorokhoff-signed buckle, which I believe is unique to the brand. 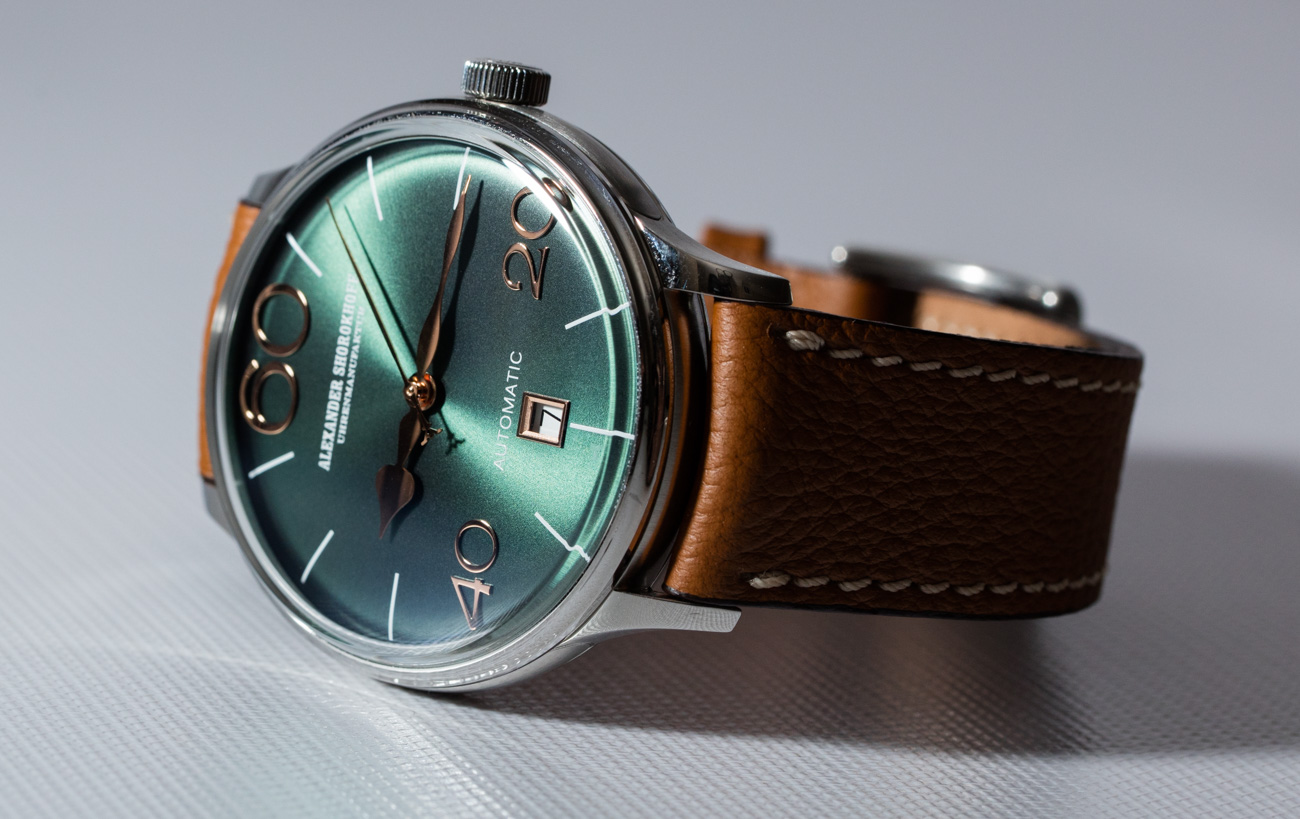 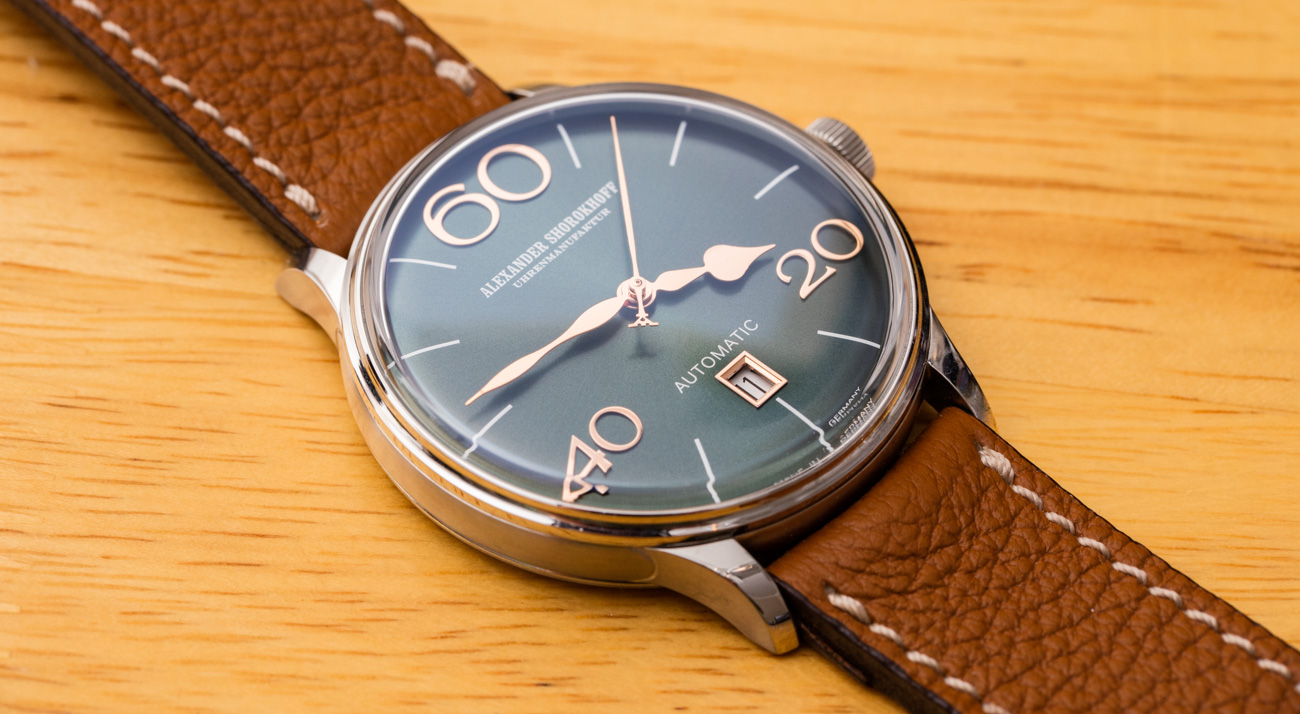 Reading the dial of the Model 63 is pleasant but the shiny hands and hour markers do reflect some light as does the sapphire crystal (even though it is AR-coated). Assuming the design is for you, my only serious complaint about the watch is that it could benefit from fewer reflective elements and/or AR-coating. This would just make a classy watch that much classier, in my opinion.

Alexander Shorokhoff offers the Model 63 with four dial colors, including the pictured “emerald green,” as well as “midnight blue, deep black,” and “bordeaux.” In my estimation, each of these colors will look best when matched to a strap that mimics the dial color as closely as possible, though adding a black or brown strap is clearly the most conservative option. Then again, I’m not sure any Alexander Shorokhoff as a brand is intended for conservative timepiece-wearers. 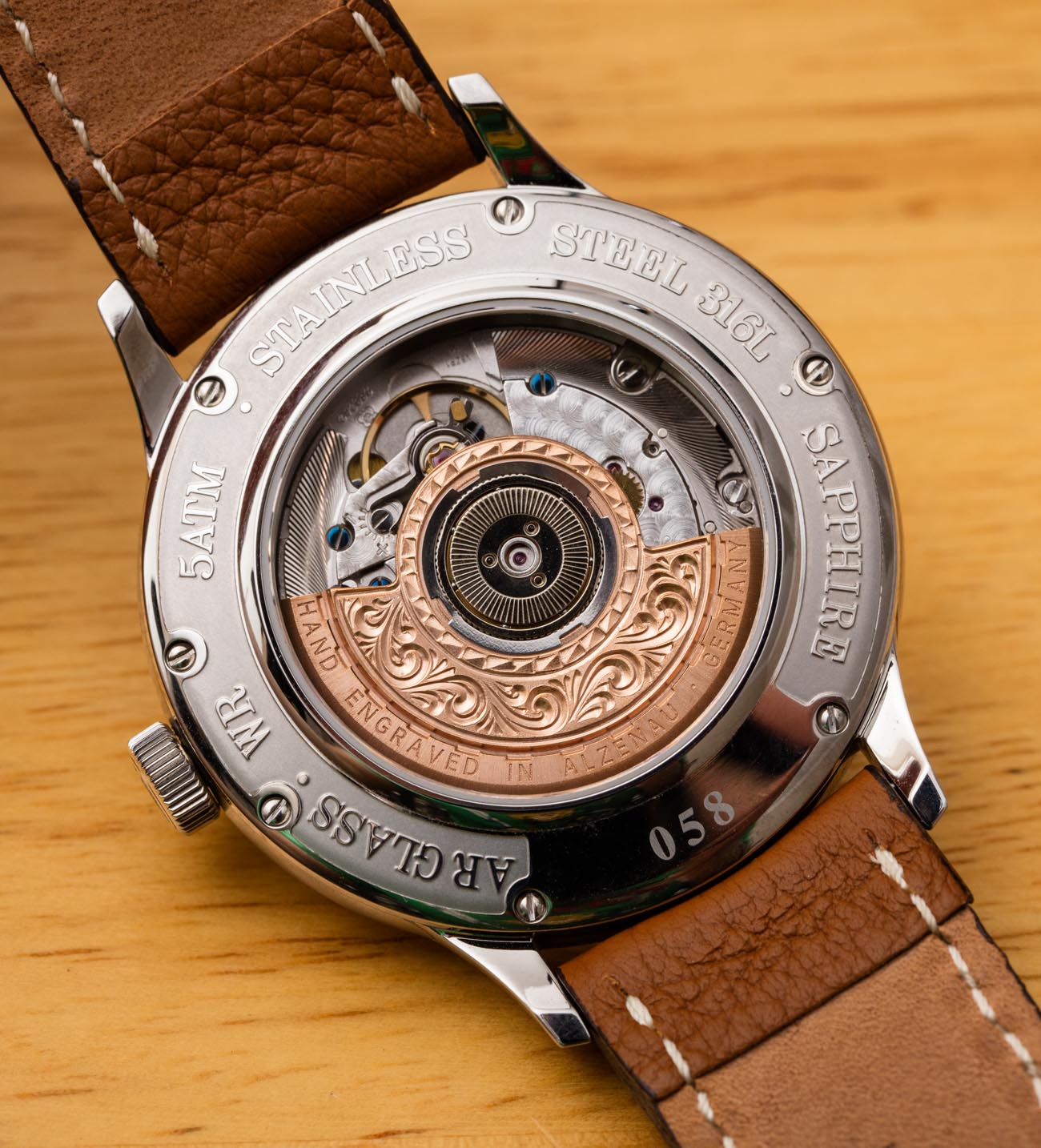 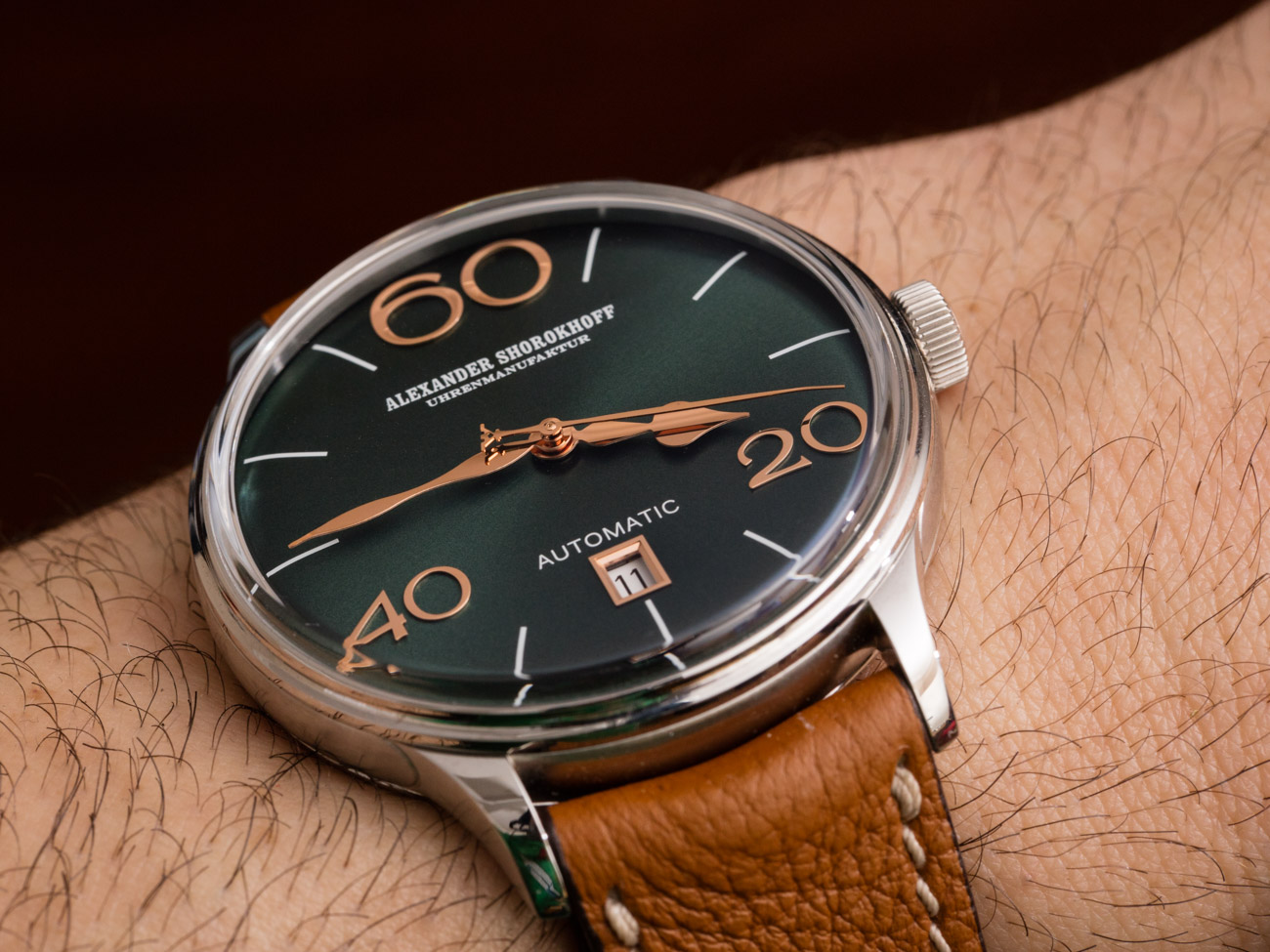 Inside the watch and visible through a sapphire crystal on the back of the watch is a Swiss ETA 2892-2 automatic movement. Alexander Shorokhoff calls this the caliber 2892.AS because of the addition of the bespoke automatic rotor. From a presentation standpoint, this hand-engraved brass rotor is impressive. Alexander Shorokhoff makes a point to clarify that this is indeed a hand-engraved rotor and not just one that has been machined or otherwise manufactured (such as stamped) with this look. The rotor itself reads “Hand Engraved In Alzenau, Germany.”

The base 2892 automatic movement is in decorated form with perlage polishing and blued-steel screws. The movement offers the time and date (placed symmetrically on the dial over 6 o’clock via an attractive yet bold window) operating at 4Hz with about two days of power reserve. This is a fitting and welcome movement in a watch with this retail price, and I would think that potential customers take into consideration the presentation of the movement when judging the overall value of the watch. 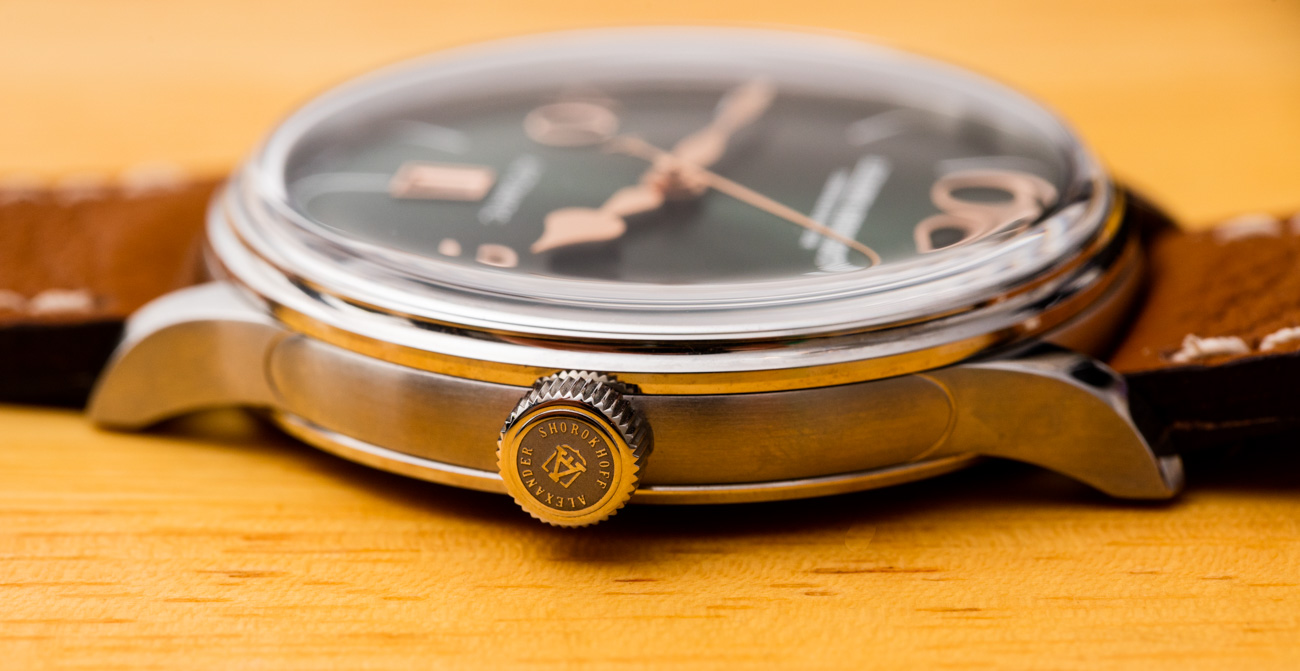 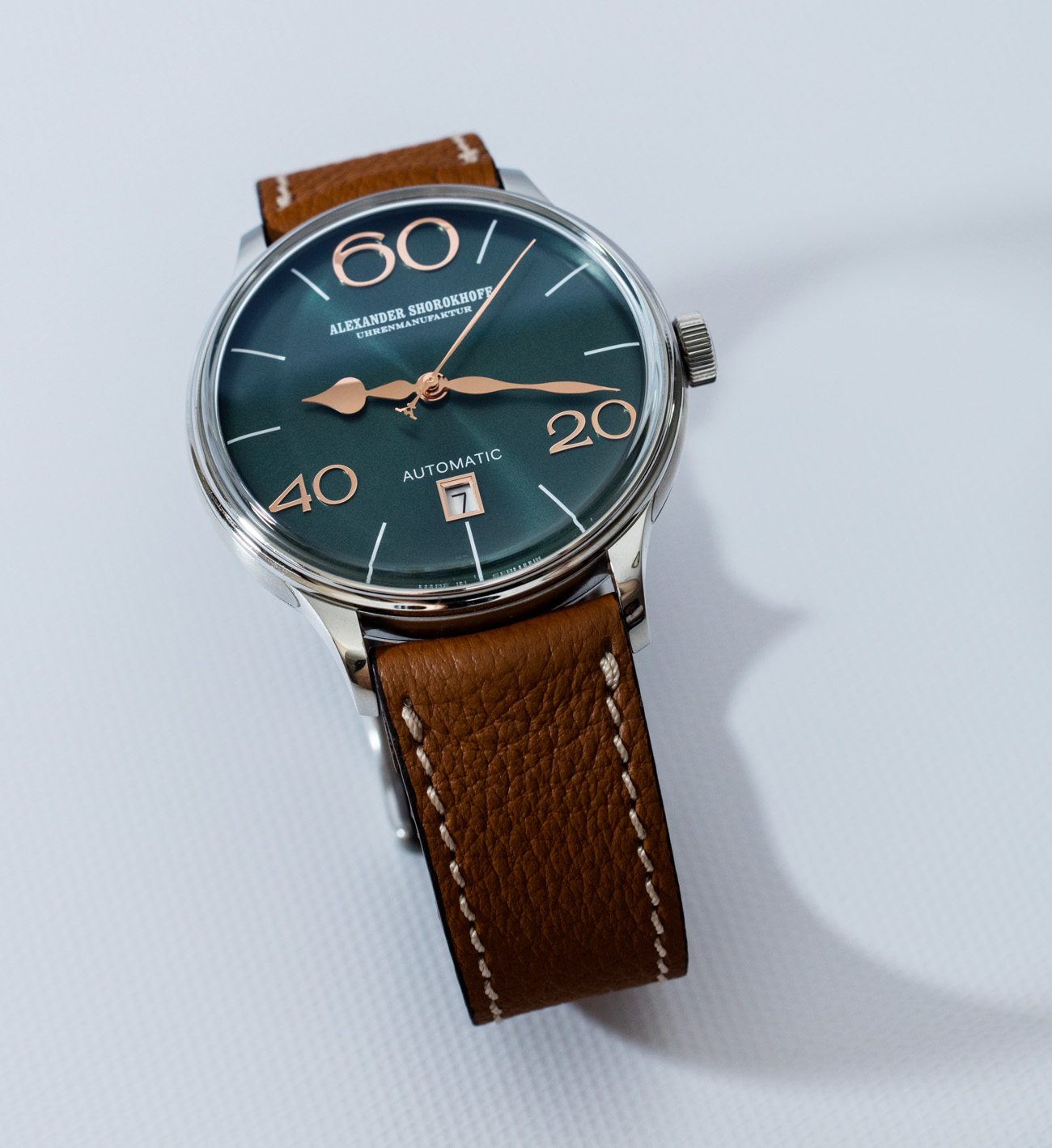 Not everyone will like the particular dial designs that have typified many Alexander Shorokhoff watches over the years and that is featured in the Model 63. I happen to like the assertiveness of the look, which is a bit more outspoken and masculine than many other more “polite” dress watch dials. Though as I said, I can appreciate that such a look is not for everyone, and it certainly doesn’t match every style. What the Model 63 loses in overall fashion versatility, it makes up for in individual style and character. The watches are not part of a limited edition, but each piece has an individualized serial number attached to it. Price for the Alexander Shorokhoff Model 63 watch is $1,650 USD. Learn more at Alexander Shorokhoff here.

Necessary Data:
>Brand: Alexander Shorokhoff
>Model: Model 93 (Emerald Green dial as reviewed)
>Price: $1,650 USD
>Size: 40mm wide, 11.3mm-thick
>When reviewer would personally wear it: As a casual dress watch when a bit of character and color are merited.
>Friend we’d recommend it to first: Someone with more than a passing interest in 1960 design aesthetic – especially from Europe.
>Best characteristic of watch: Comfortable, unique in its design, and affordable. The hand-engraved automatic rotor is a tasty icing on the cake.
>Worst characteristic of watch: Stuck in a crowded market with a lot of competition and a not too much of a serious story to garner attention to this otherwise good product. Collector cash is really pulled in a lot of directions at this price point and for watches like this. Model 63 dial and crystal suffer from just a bit too much reflectivity, in my opinion — but its not serious.