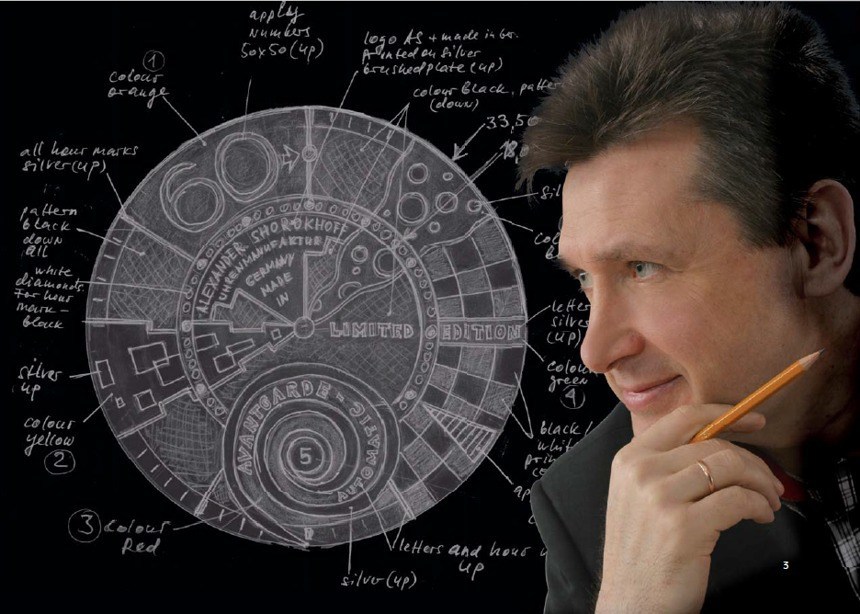 While Russian-born German watchmaker Alexander Shorokhoff does have a Heritage line of watches, a lot of his company’s creative juice these days is focused on their eclectic Avantgarde line of watches. Avant-garde (French for “advance guard” or “vanguard,” literally “fore-guard”) are people or works that are experimental or innovative. With that in mind, let me say up front that most of the watches in the Avantgarde line are not what you would call a “first watch.” No, these are for when you already have more mainstream watches and are ready for something out of the ordinary – something daring, even. What makes them stand out even more is that you’re not going to be paying five or six figures for these reasonably-priced pieces.

Alexander Shorokhoff refers to this watch line as “Art on your Wrist,” and that is very apt. Art is very personal, both in terms of what you appreciate and what you choose to acquire, as a reflection of your individual tastes. Are all of these watches the type of items I could see myself wearing daily? No, but each one has a charm or quirky appeal of its own. And, yes, there are a couple of them that I would easily wear every day for a given season of the year (except that there aren’t well-defined seasons where I live). 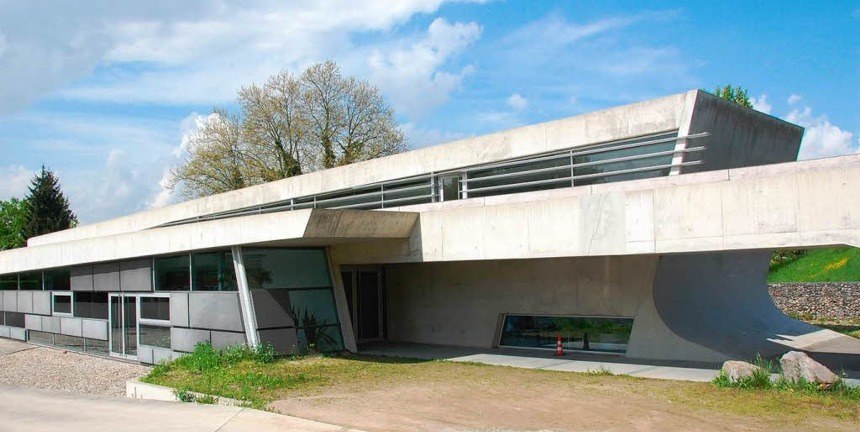 What we are looking at today are just some of the watches from the Alexander Shorokhoff Avantgarde line. I had the pleasure of trying on each of the following watches at Baselworld 2015. Unlike most exhibitors who display their new watches as the immense Messe show halls in Basel each Spring, a couple of years ago, Alexander decided to instead showcase his watches at the Landesgartenschau (in the Hadid Pavilion) just across the border in Weil am Rhein, Germany. This calm oasis stands in stark contrast to the hustle and bustle of the Messe. Manning their art show like exhibit is Alexander and his family, who welcome you as a friend and treat you like family. It is all very different from the all-business vibe in the big brand booths just a couple of kilometers away in Basel.

Something I’ve noticed at Baselworld is that when you are speaking to an actual watchmaker (or movement designer), they notice and comment on what you are wearing. In the big corporate booths you could wear a cucumber on your wrist and no one would say anything about it! Needless to say, Alexander notices what you wear and is eager to talk about it. Like the AHCI (independent watchmakers) I’ve run into at BaselWorld, watchmakers like Alexander are typically humble, approachable, and nice people to hang out with, proud of their wares, but without any PR spin in the conversation.

So, without further ado, on to the watches. Today, we will highlight the following Alexander Shorokhoff Avantgarde line watches: 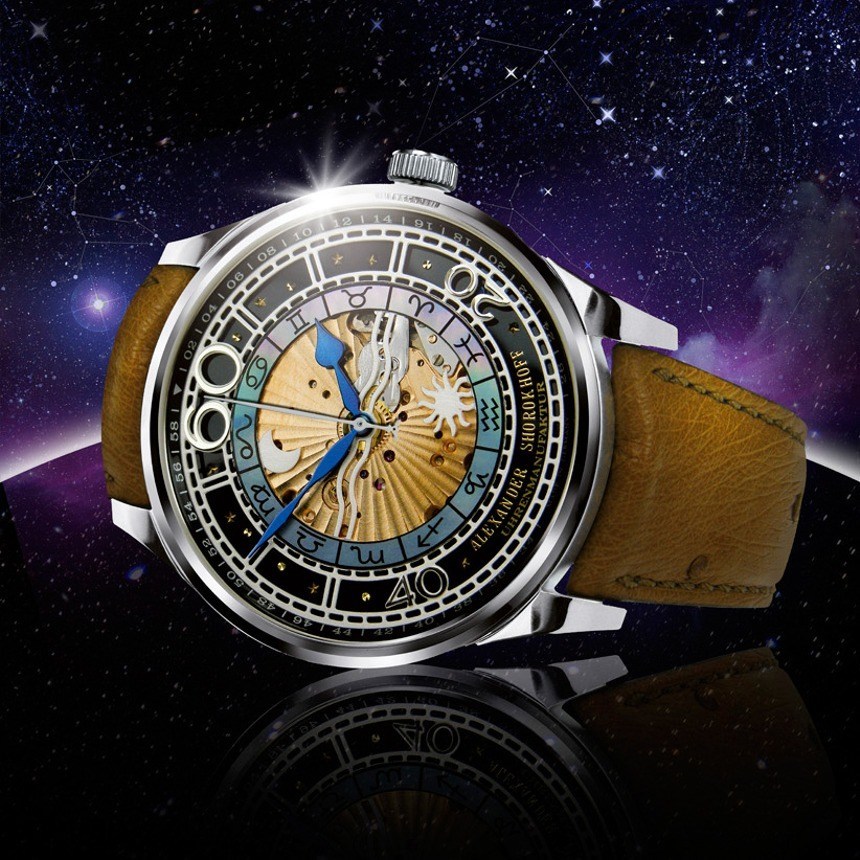 The Babylonia is probably the most iconic watch for Alexander Shorokhoff. Featuring a hand-engraved 2609.AS movement, it looks very little like the Poljot 2609 caliber it is derived from. By the way, the 26 in the original caliber name indicates that this is a 26mm movement. The original version of this watch (Babylonia I) incorporates the large “60” on the top of the dial and slightly smaller numerals at 20 (4 o’clock) and 40 (8 o’clock) which are found on many Shorokhoff watches. 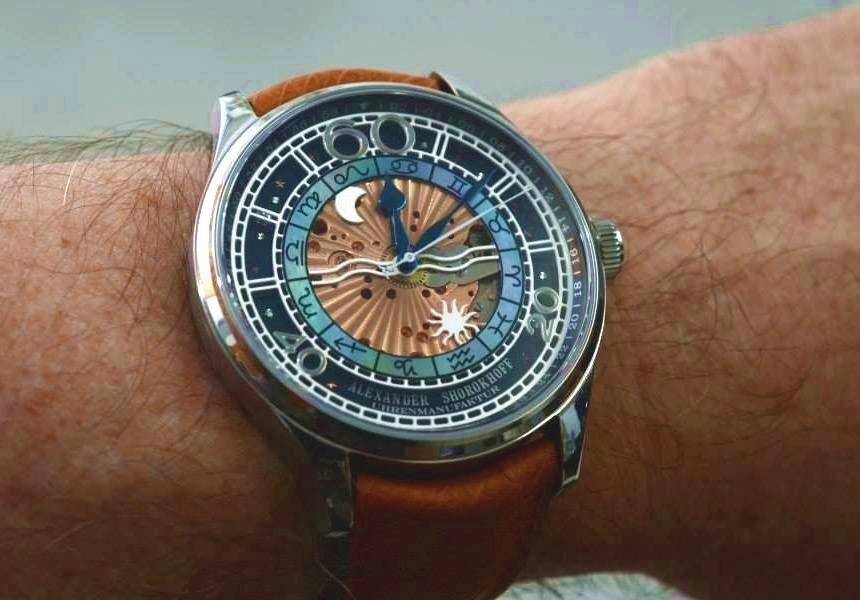 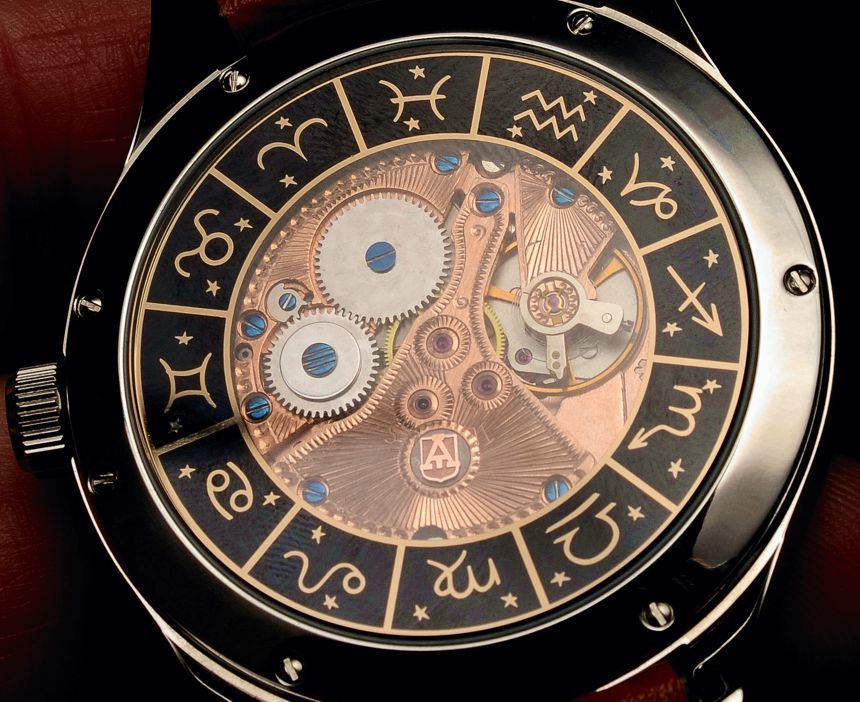 New this year is the Alexander Shorokhoff Avantgarde Babylonia II which has an elaborately engraved dial. There are novel minutes/seconds markings on the chapter ring on both the new and original pieces. The mother-of-pearl zodiac-inspired chapter ring and hour markers are a consistent design element on all Alexander Shorokhoff Avantgarde Babylonia pieces, along with the fixed sun, moon, and water design elements (representing the Euphrates and Tigris rivers). 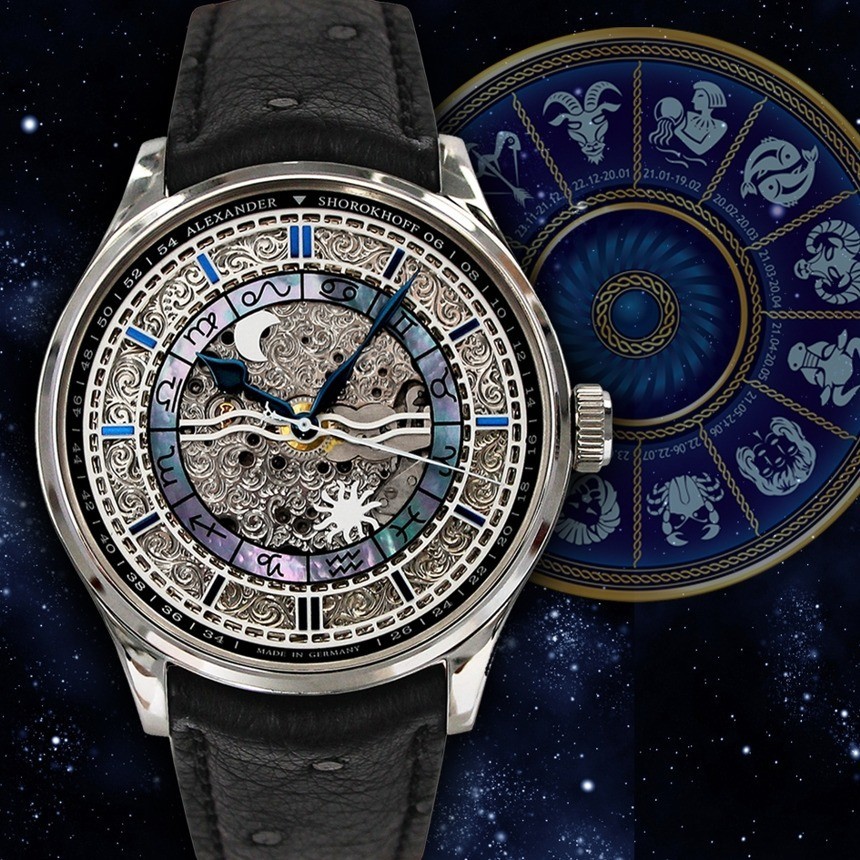 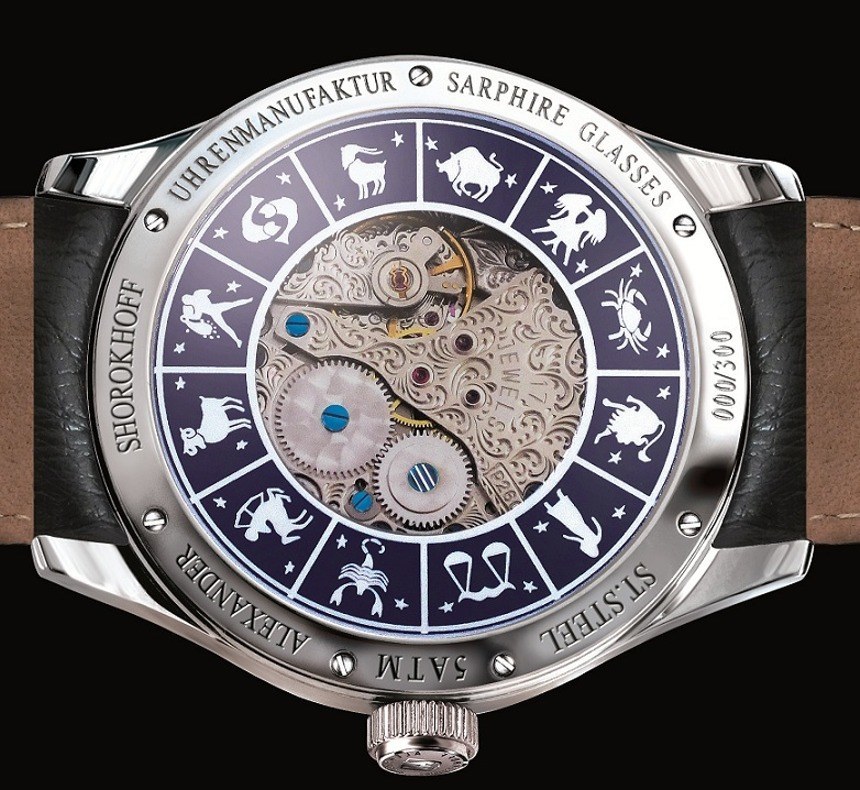 In our retailer series, Ray Grenon (Grenon’s of Newport) selected the Babylonia as the watch he thinks best represents the tastes of Newport, Rhode Island. I can’t argue with Ray, as the Alexander Shorokhoff Avantgarde Babylonia is a very unique-looking watch but one that is also refined and could easily pass for a much costlier timepiece. At 47mm, this is not a small watch, but it wears well for its size – due in part to its 11.5mm thinness. 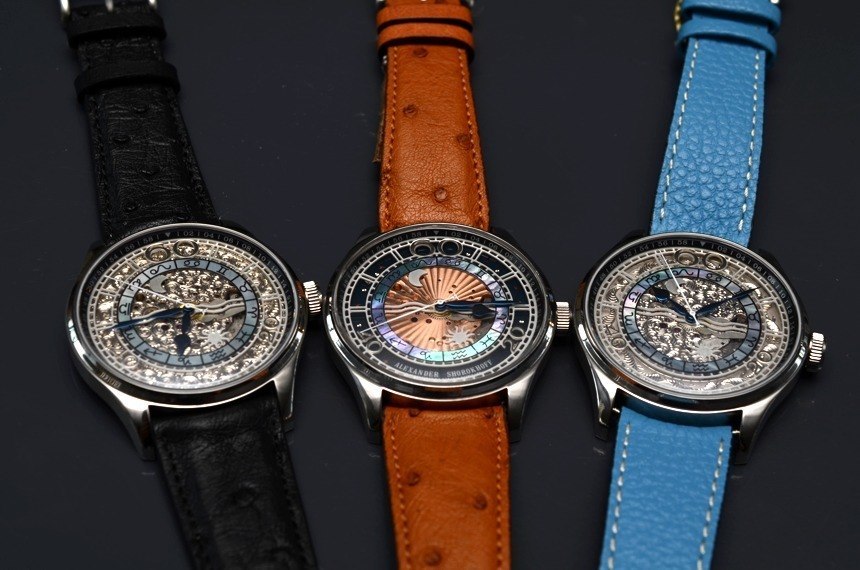 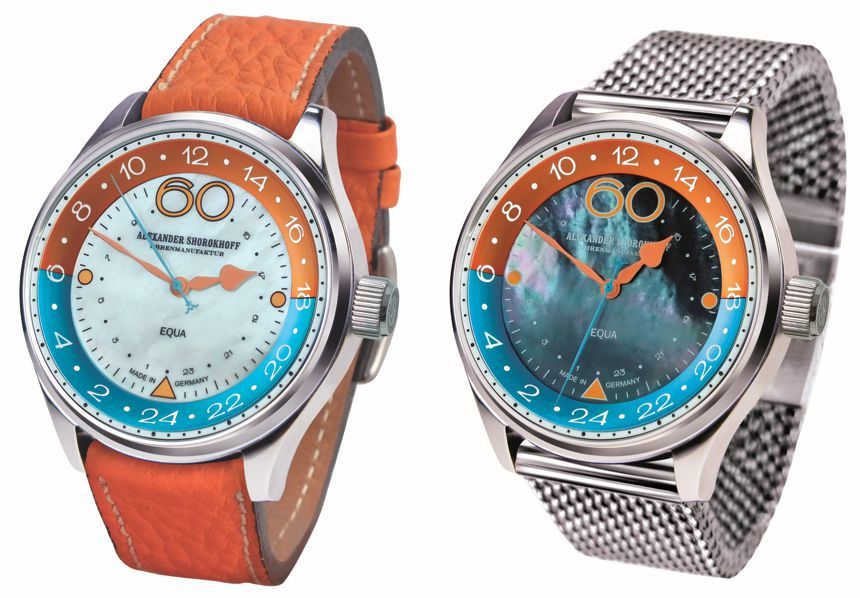 The 24-hour Alexander Shorokhoff Avantgarde Equa watches are available with a light or dark mother of pearl dial. These are not dual-time or GMT watches, but they do have a 24-hour indication versus the usual 12-hour scheme. It’s powered by a caliber 2423.AS movement that began life as a Vostok 24-hour movement, but which was completely dismantled and refined by Alexander Shorokhoff. The movement runs at 19,800bph and has hand engraving. 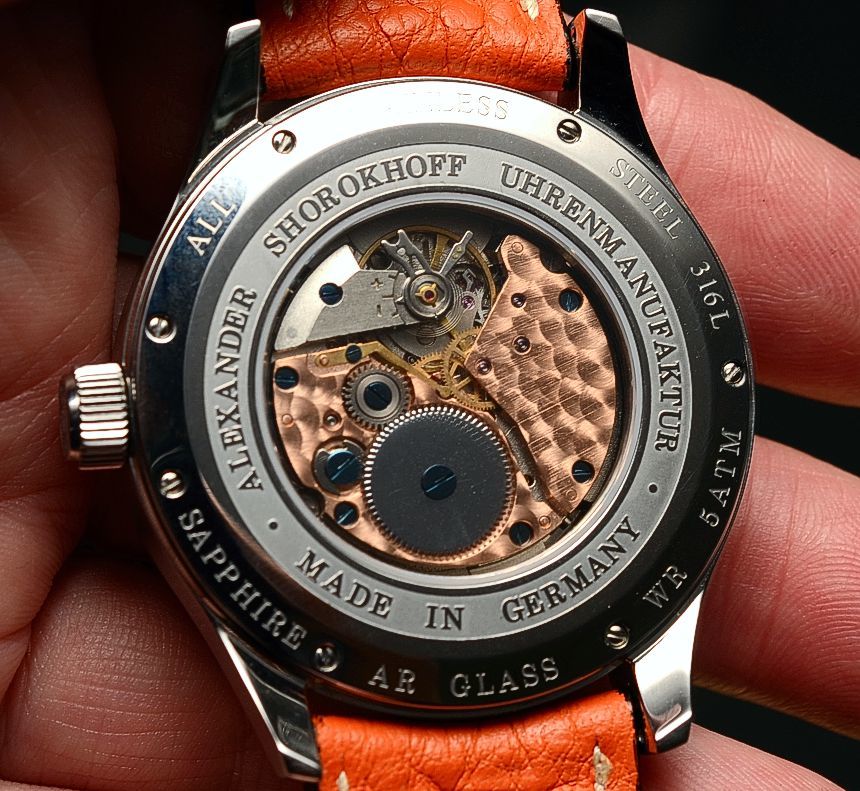 The hand engravings can be seen through the sapphire exhibition back. The dark mother-of-pearl almost looks like the night sky (if you have a little imagination) and counters the conventional argument that mother-of-pearl is only for ladies’ watches. 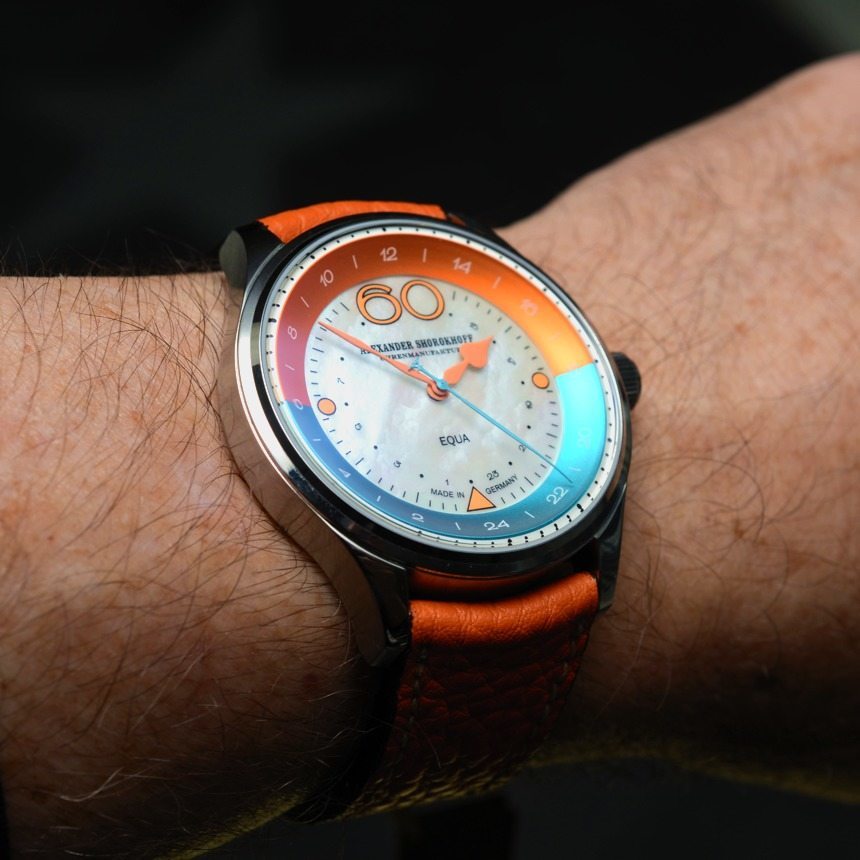 The light dial has visual texture and a hint of color, and does not look feminine at all. Not that the ladies couldn’t rock this watch, but guys should have no problem so long as they are comfortable with the bright orange and metallic blue rehaut with its 24-hour markings. On paper, this combination (MOP, orange, and blue) might not sound so great, but I think it all comes together in the finished watch. The orange and blue rehaut is bright and metallic and provides a nice contrast to the iridescent white mother-of-pearl. These bright and summery-24 hour watches were my favorite new Shorokhoff pieces this year. 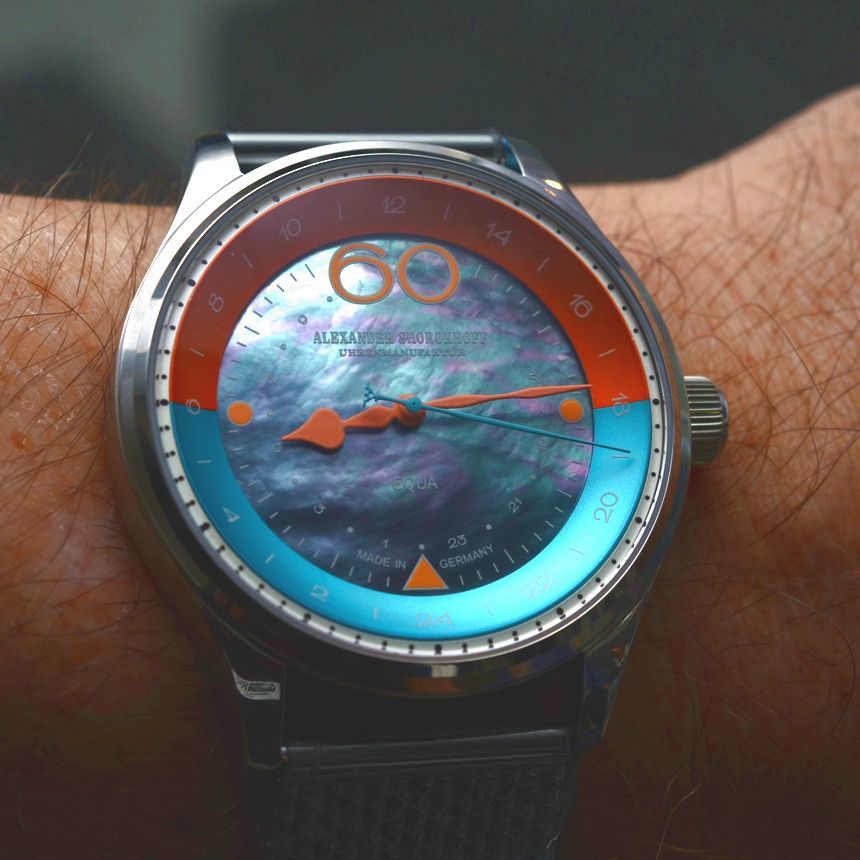 The stainless steel watch comes in a 43.5mm-wide case that sits 11.5mm high. It has 50m of water resistance, and anti-reflective coated sapphire on the case front and back. Available with a calfskin leather strap or a mesh band bracelet, the Alexander Shorokhoff Avantgarde Equa on calfskin leather strap is priced at $1,365 and $1,720 on the mesh steel bracelet. 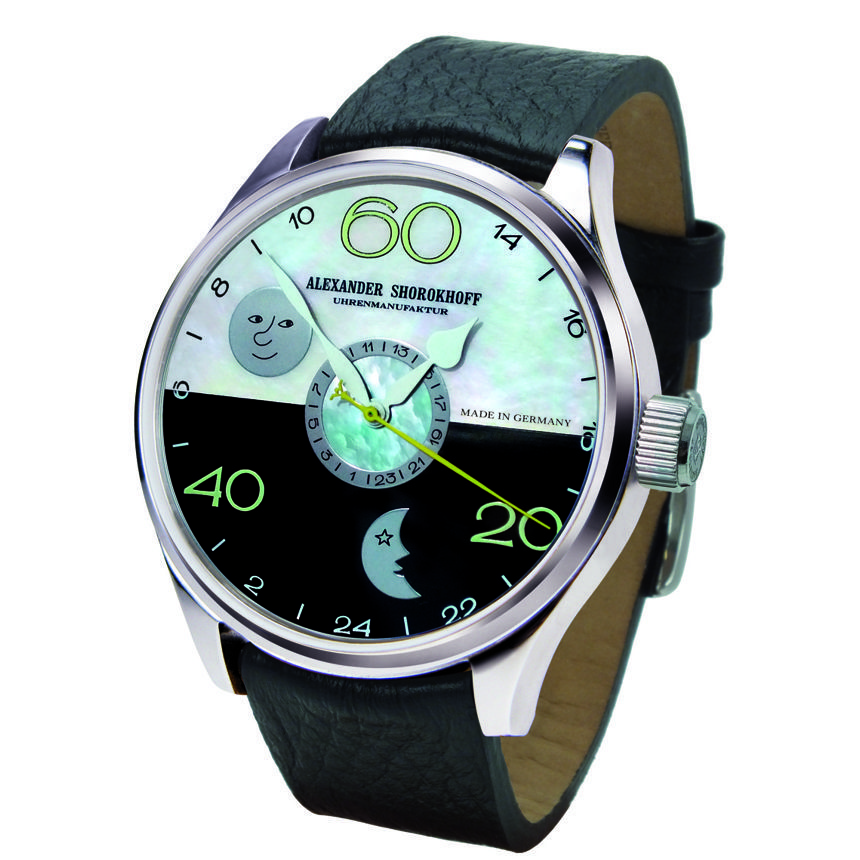 Related in function but very different-looking from the Equa is the Alexander Shorokhoff Avantgarde Day & Night 24-hour watch. Again, mother-of-pearl graces this watch. But largely, the MOP  is not obtrusive and appears simply white at some angles. Interestingly, the even hours are indicated at the periphery of the dial while the odd hours are displayed on the small inner ring. And no, the sun and moon do not move. They are just there to playfully indicate which half of the dial displays what part of the day. 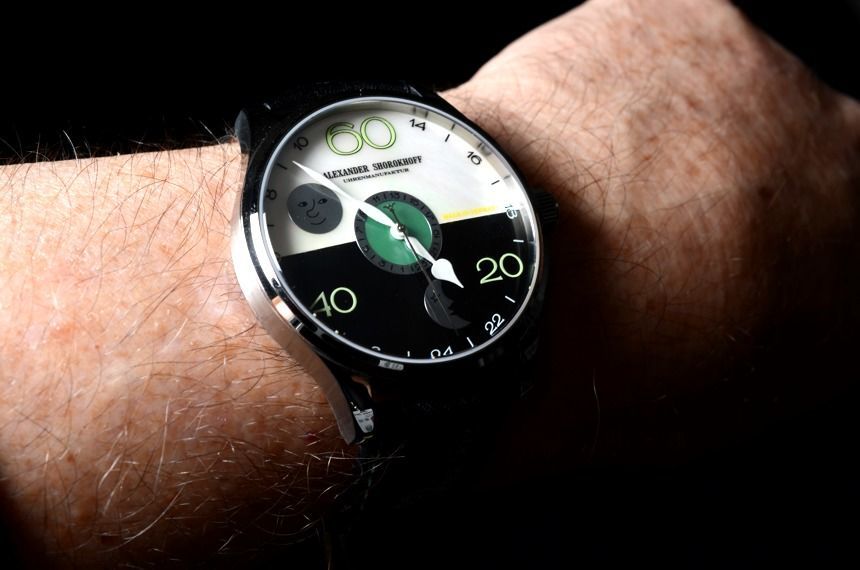 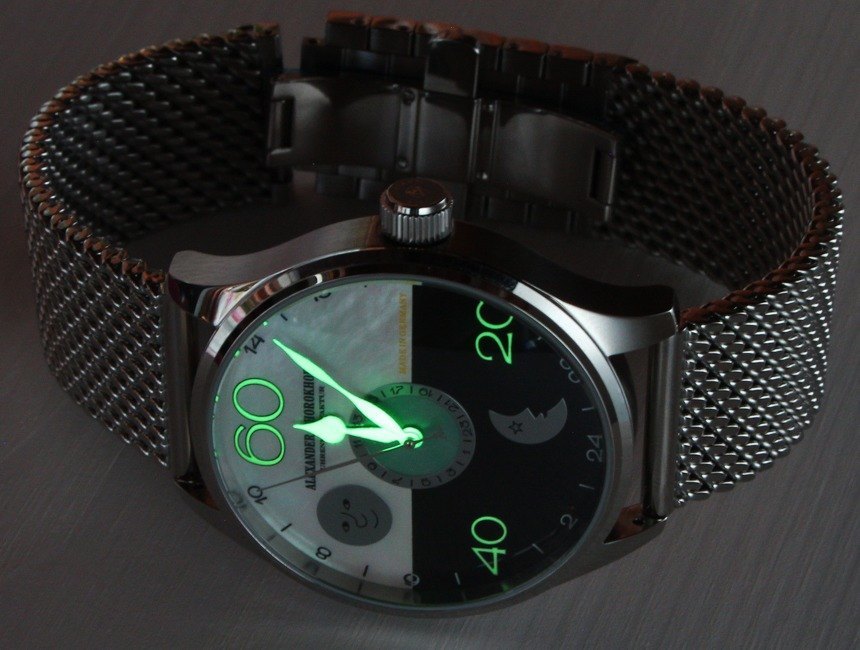 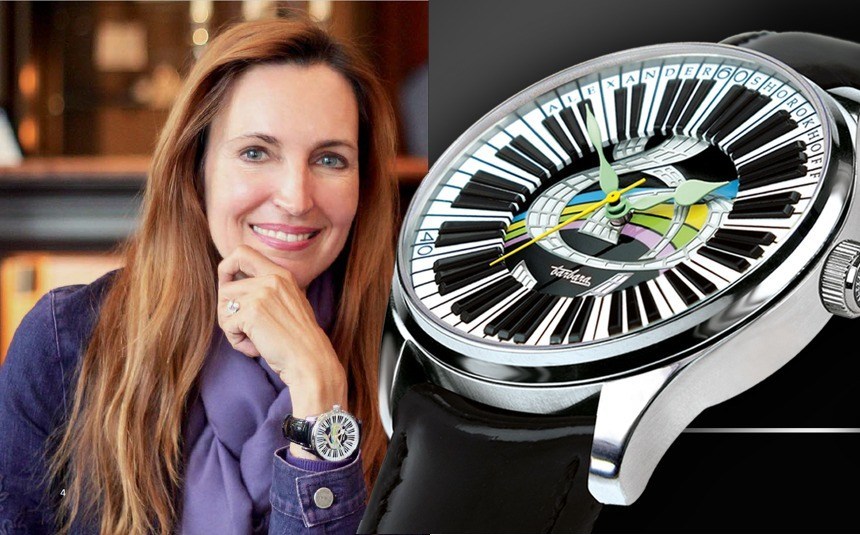 The Alexander Shorokhoff Avantgarde Barbara is named after Barbara Dennerlein, a well-known jazz musician in Germany and around the world, being especially famous for playing the legendary Hammond B3 organ. Since 2012, Barbara Dennerlein and Alexander Shorokhov have had a very productive association. Alexander has now developed a unique watch dedicated to Barbara. With this design, he presents the watchmaker’s realization of what art and avant-garde mean to him. This watch is a limited edition, with 169 pieces made. 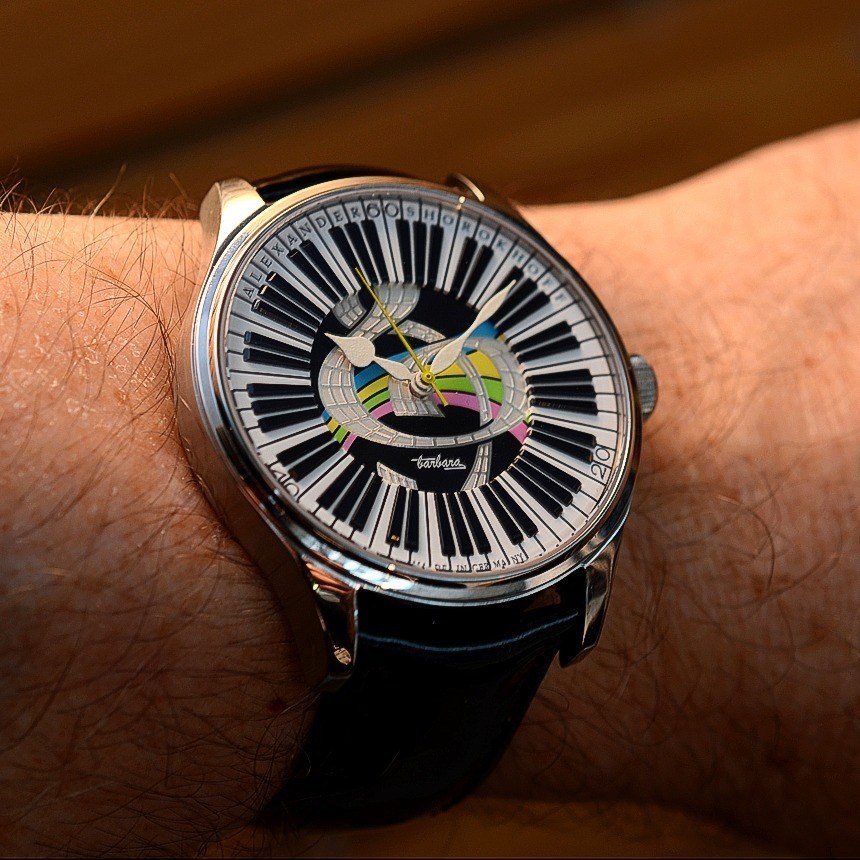 The Alexander Shorokhoff Avantgarde Barbara shares a similar case as the Equa and Day & Night, at 43.5mm wide and 11.5mm high. It has 50m of water resistance as well as a sapphire crystal with anti-reflective coating. The watch has a swiss ETA 2824 automatic movement that runs at 28,800bph and has a 42-hour power reserve. It also features a hand-engraved rotor. The Alexander Shorokhoff Avantgarde Barbara watch comes on a calfskin leather strap and has a price of $2,100.