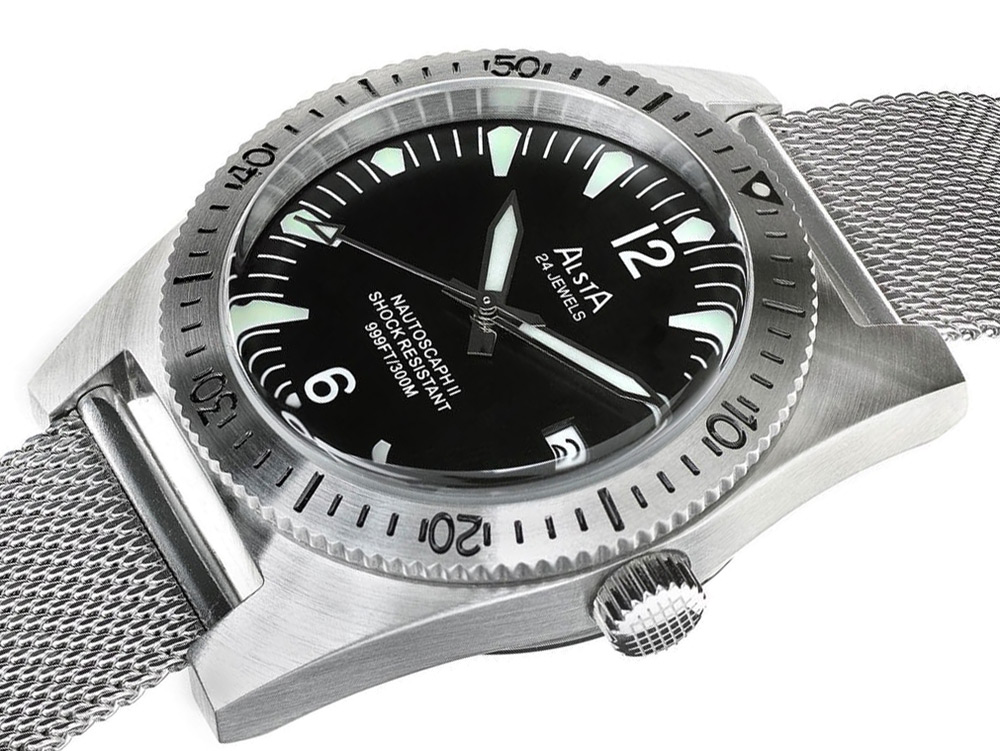 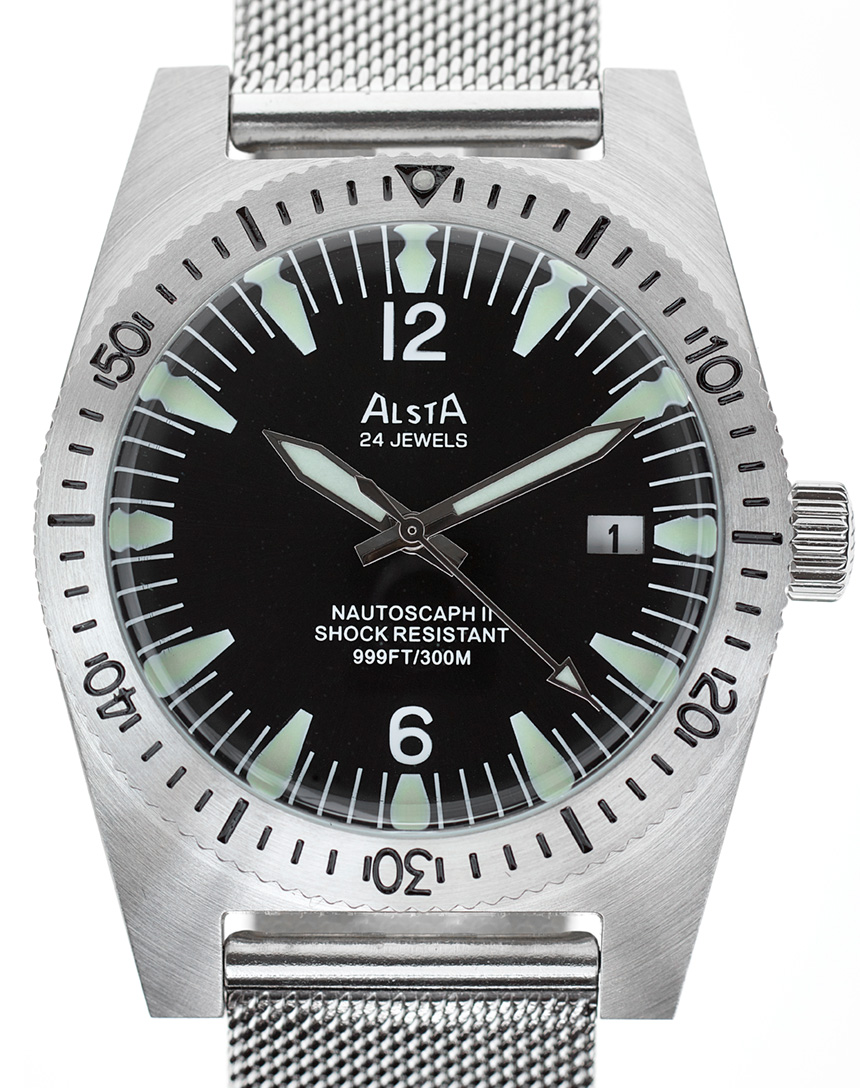 The industry-wide trend of re-releasing archive models updated with modern technology is joined now by the newly revived Swiss brand Alsta. Their original Nautoscaph diver’s watch has something of a cult following in part due to its very ’70s diver aesthetic as well as its inclusion in the 1975 film Jaws, in which oceanographer Matt Hooper (played by Richard Dreyfuss) wears the original Nautoscaph whilst battling the film’s man-eating star, a great white shark. Resurrected in 2014, in a manner which resembles Doxa’s comeback or the more recent return of Aquadive, Alsta have recently announced their first watch, the Alsta Nautoscaph II. It is an updated version of the original diver’s watch now featuring German and Swiss case components and a Japanese automatic movement. 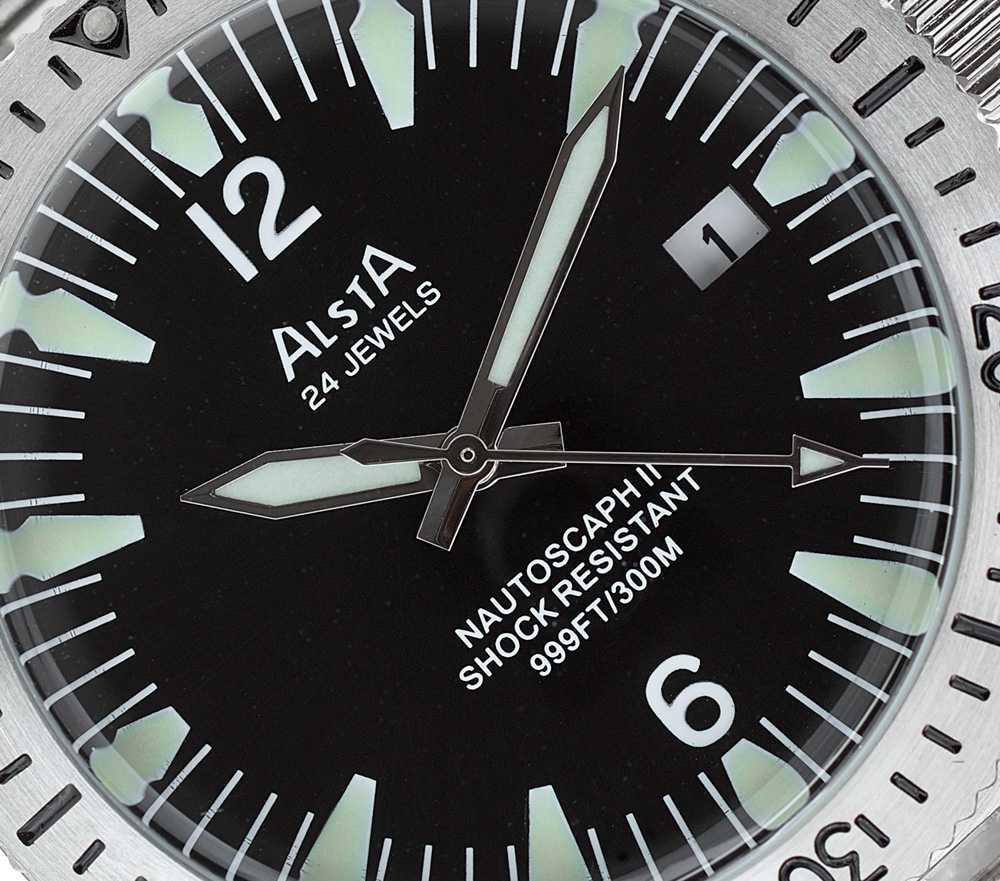 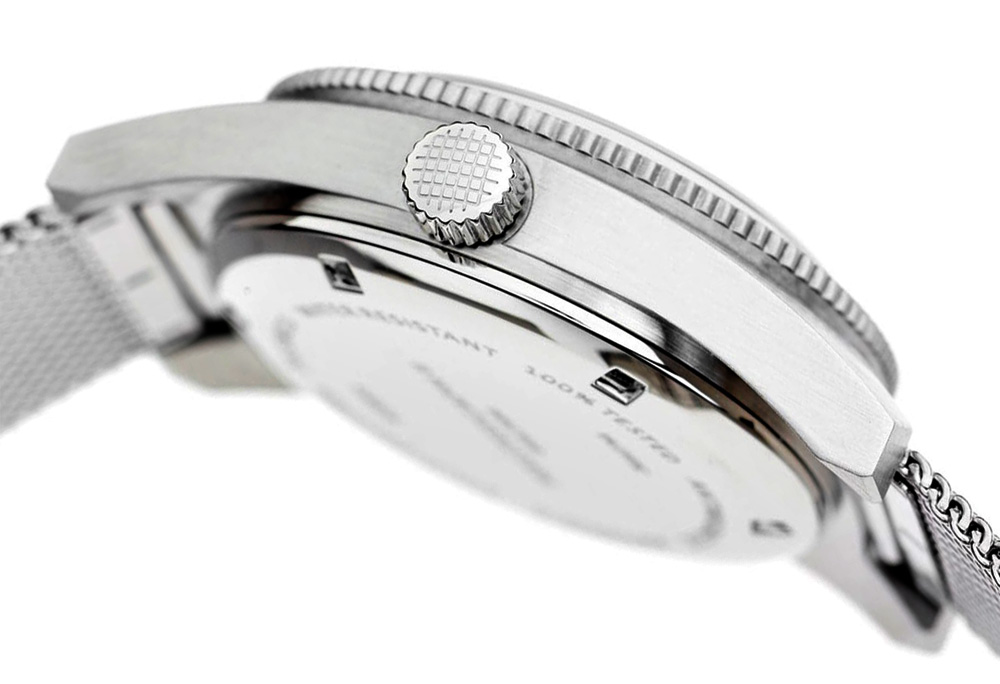 For the new Nautoscaph II, Alsta have elected to keep the overall look of the watch extremely similar to its predecessor. While the case style of the Alsta Nautoscaph II is more traditional diver and less cushion-shaped compared to the original Alsta featured in Jaws, the new Nautoscaph II’s straightforward, satin-finished stainless steel design with reasonable 40mm-wide by 48mm-long dimensions and a screw-down, cross-hatched, 6.5mm crown keep the vintage feel going, while a 20mm lug width allows for a veritable cornucopia of strap choices. A stainless steel bezel, engraved and filled with black paint as opposed to having an insert, ensures easy reading of the elapsed time even after the watch has taken an undersea beating or two, perhaps at the hands (fins?) of a great white shark. 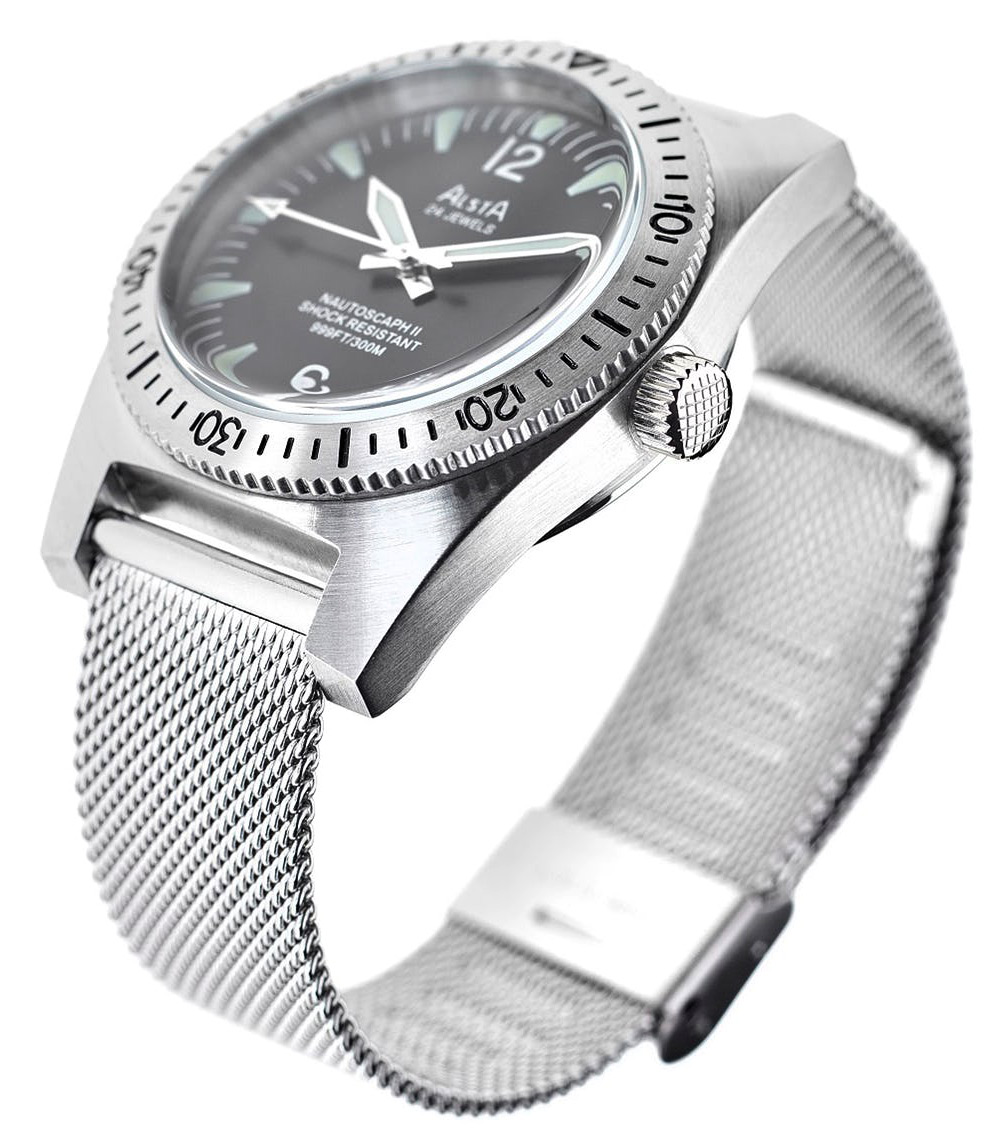 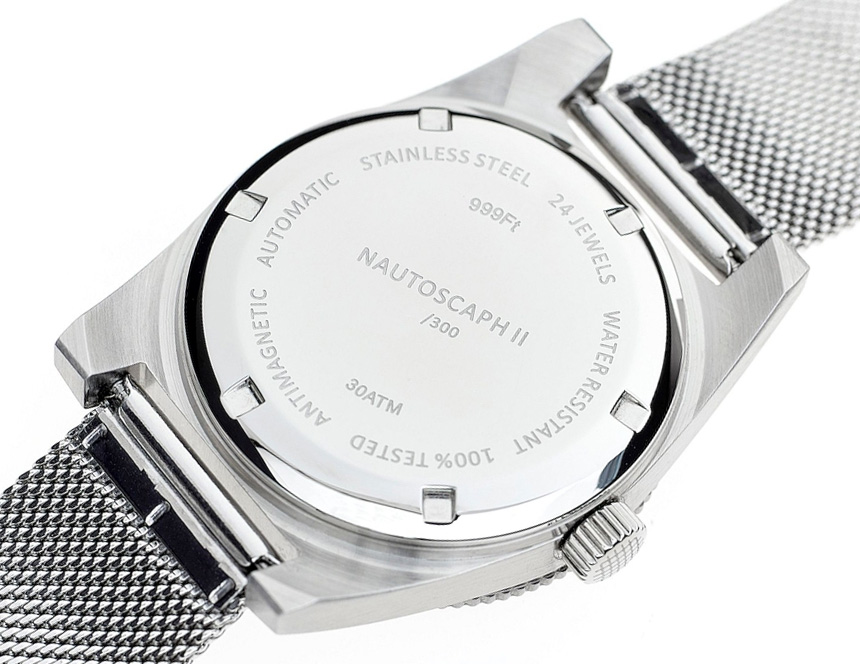 The inky black dial is pure vintage Alsta Nautoscaph, with chopped-off triangular hour markers each sporting a healthy coating of Super-LumiNova. Polished sword hands and an arrow-shaped sweep second hand, also coated with Super-LumiNova, track the time while a traditionally located three o’clock date window allows for easy viewing of the black on white date wheel. Keeping the whole thing running is a Seiko NH35A, a hacking, 24-jewel, 41-hour power reserve caliber, which is being utilized in more and more sport watches in the entry- to mid-level category to keep the overall costs lower while retaining relative accuracy and durability. A highly domed mineral crystal rounds out the Alsta Nautoscaph II and aids in the watch’s 300m water resistance rating while a seat belt style mesh bracelet secures the watch to the wrist. Alsta indicate their watch components are manufactured and tested in Switzerland and Germany while the movements are Japanese. The actual location of Alsta’s assembly is a bit unclear, however. 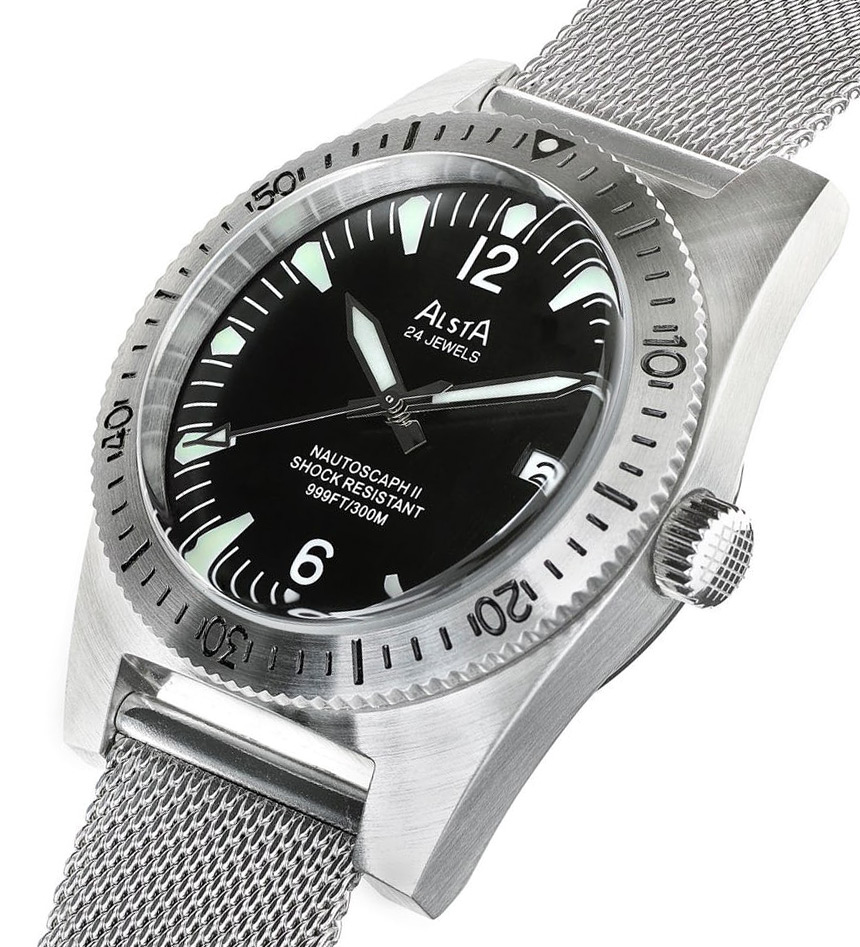 Alsta’s new Nautoscaph II fits ever so snugly into the recent trend of “vintage revival,” or whatever you prefer to call it. Where new brands struggle to create contemporary pieces to enthrall audiences, they more and more reach deeply into their history to pull out something they know works. As is the case with Alsta, entire brands are being recreated to produce or reproduce formerly successful models to compete with a busy vintage watch market in which prices seem to only go up. The new Alsta Nautoscaph II is a well-done recreation of a popular vintage piece with a dedicated following, though the almost $900 suggested retail price does place the Nautoscaph II near the top of the price range for similarly appointed pieces. Alsta’s Nautoscaph II will be available as a limited, individually numbered series of 300 pieces for $884. alstawatch.com