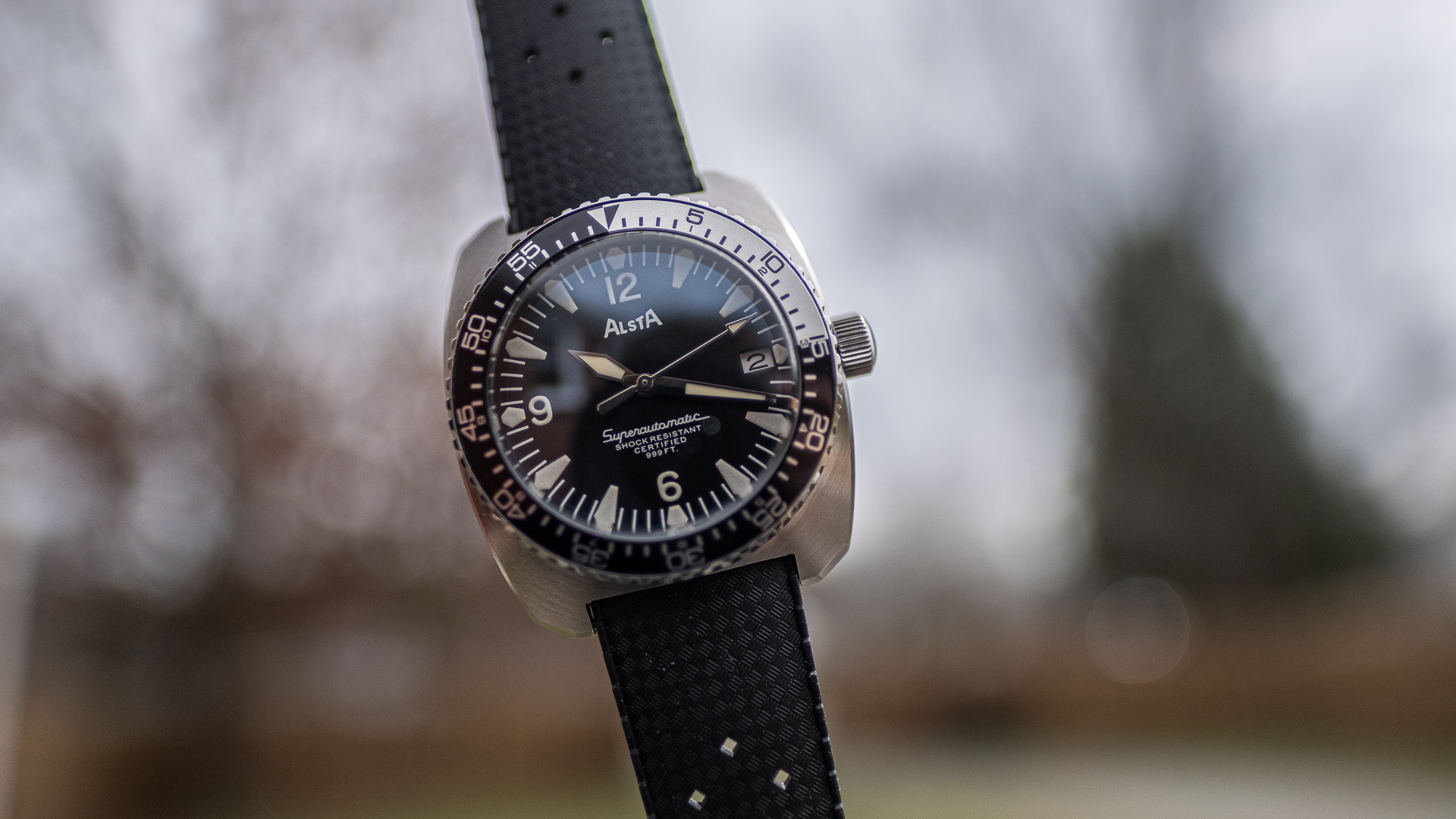 Watches being featured prominently in films has become a tale as old as time. Some have become tied together to the point that the mention of one infers the other — like Sly Stone’s Panerais, Arnold’s Seiko H558, and of course, Bond’s Rolex (and/or Seamaster). Often, the appearance of a watch in movies can create a buzz around that timepiece that didn’t exist before. A good contemporary example of this would be the Citizen 8110 Bullhead featuring prominently on Brad Pitt’s wrist in Quentin Tarantino’s Once Upon a Time in Hollywood. These watches were all but unknown before Brad’s donning one. However, I am starting to see them pop up on forums and on Instagram. We’ll see if this is a new future classic.

That phenomenon brings us to the exciting and somewhat peculiar Alsta Nautoscaph Superautomatic. Alsta was just one of many Swiss watch brands that were snuffed out of existence in the 1970s due to the Quartz Crisis. That would, in most cases, be the end of the story, but Alsta had one thing going for it. Its Nautoscaph dive watch featured prominently on the wrist of Matt Hooper in the classic movie Jaws. When the brand was rebooted by Scottish actor Angus McFadyen in 2014, it tackled reintroducing the Nautoscaph with the new version. This wasn’t the Jaws watch, however. Fast forward to 2019, when Alsta unveiled the Nautoscaph Superautomatic. 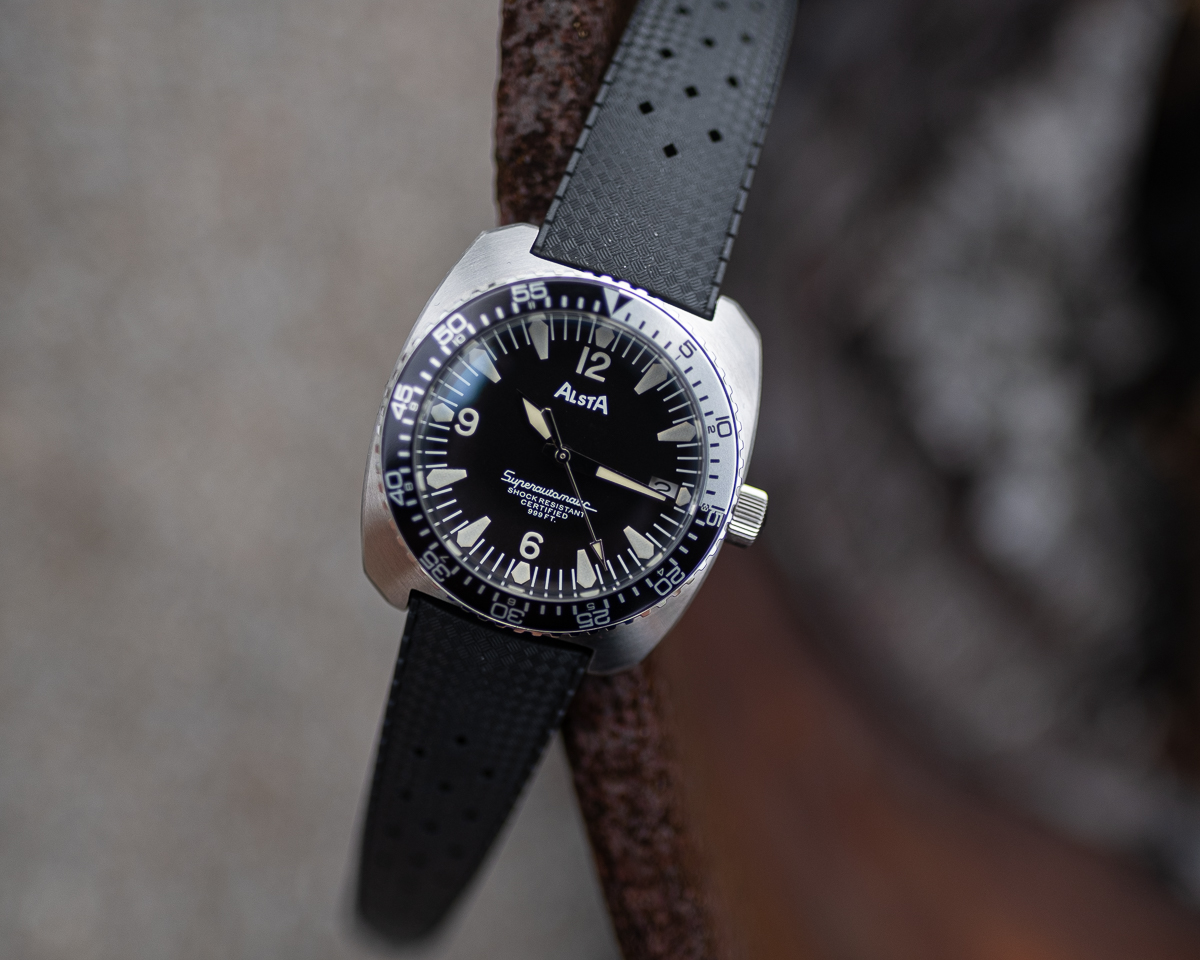 Alsta opted for the traditional cushion case that the original Nautoscaph wore. The case itself is 38mm of 316L stainless steel. The case feels almost architectural in hand with its big slab sides and block-like lugs. We see a lot of vintage reissued cushion cased watches out there, but this one really feels inspired by the watches of the ’60s and ’70s. The case is beveled around the topmost perimeter, and that bevel divides the polished sides from the brushed top. The contrasting finishes give the watch a level of visual appeal that is surprising at this price point. That said, you can tell that the edge transitions are a little softer than you’d see in something at a high price point. This is expected and comes with the territory here. 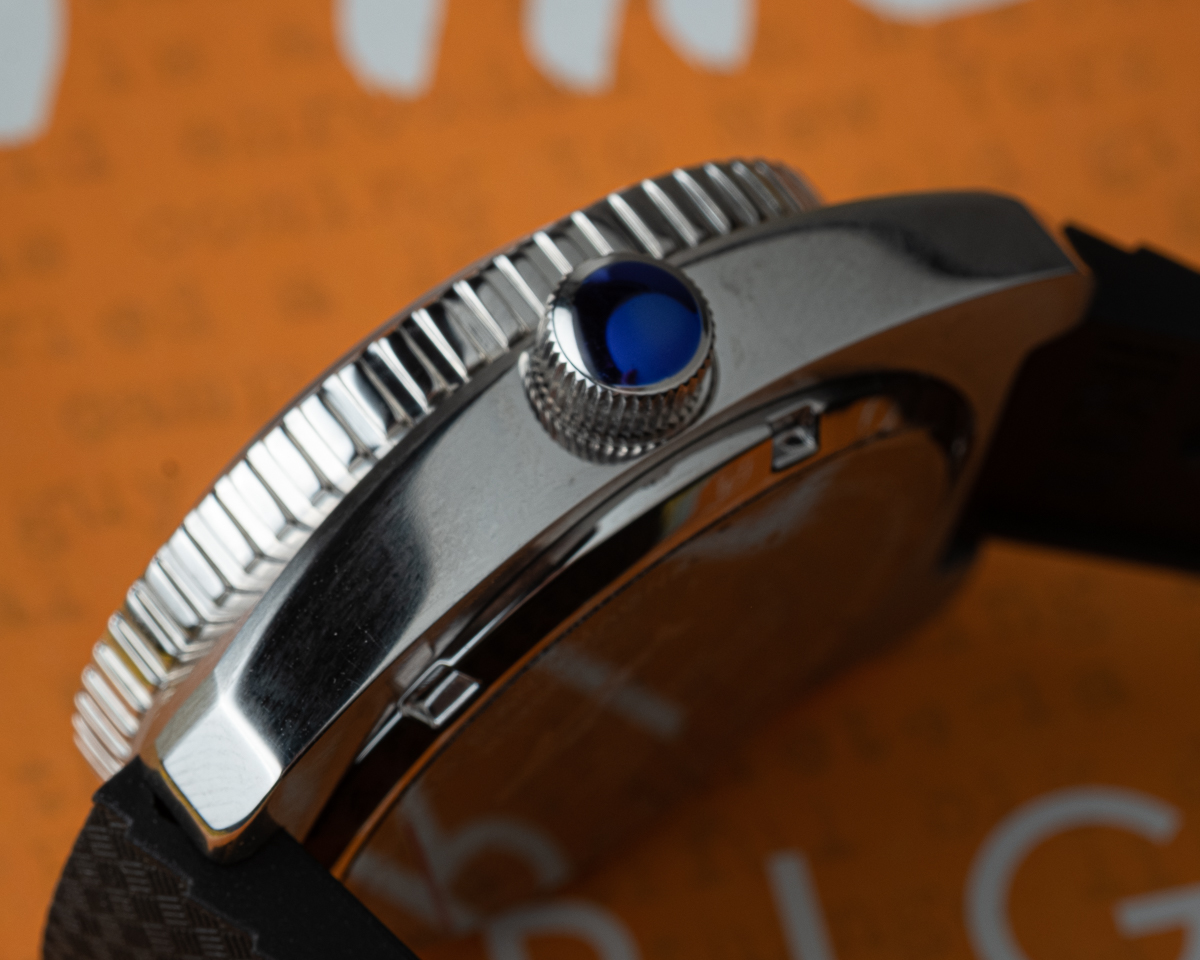 The crown is unusual. Roughly 6.5mm in diameter. Over it in the pictures is a blue plastic sticker that I didn’t remove, but it is a removable element so it isn’t part of the decorative design. 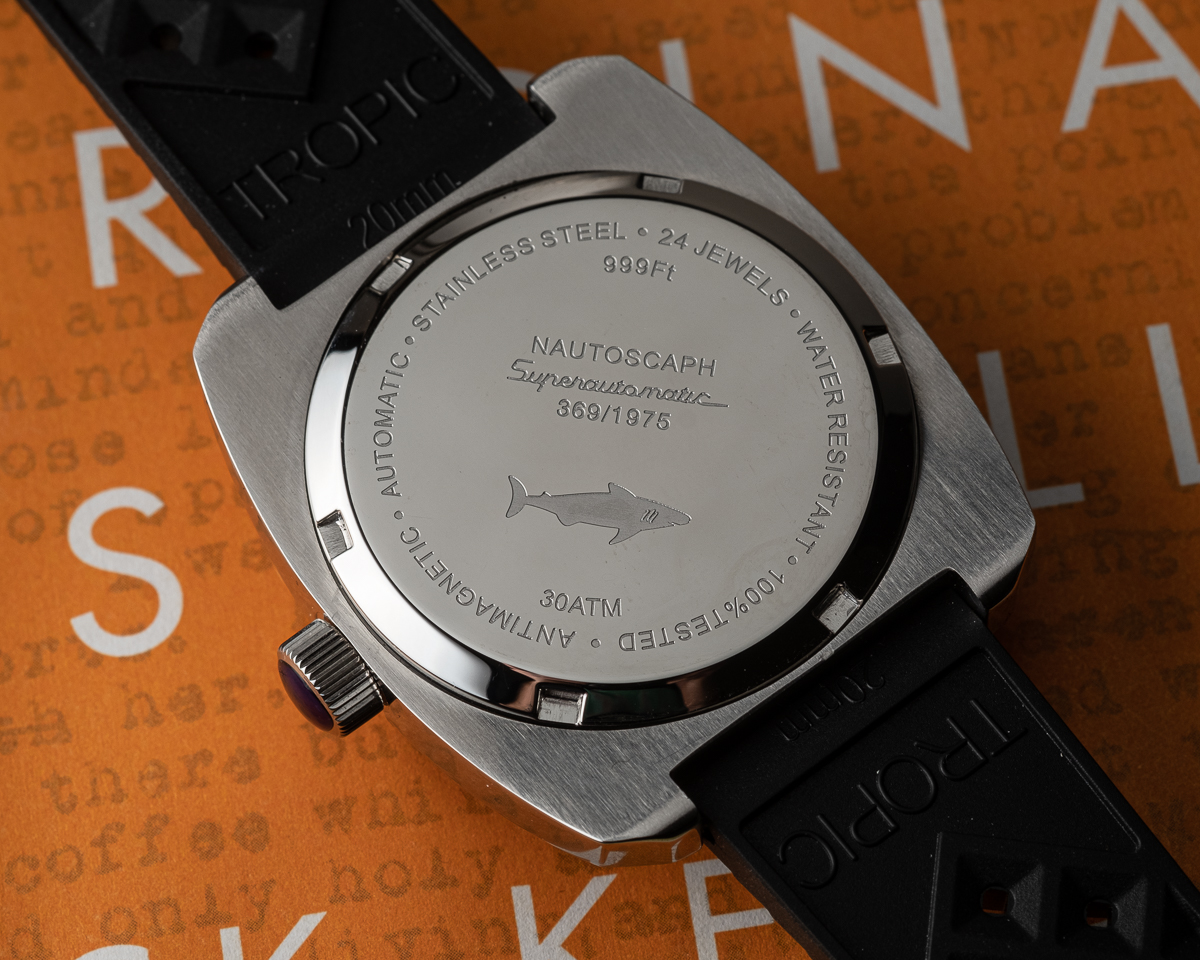 The screw-down caseback is very minimal. Its polished stainless steel with an etching of a shark (for obvious reasons) in the middle. 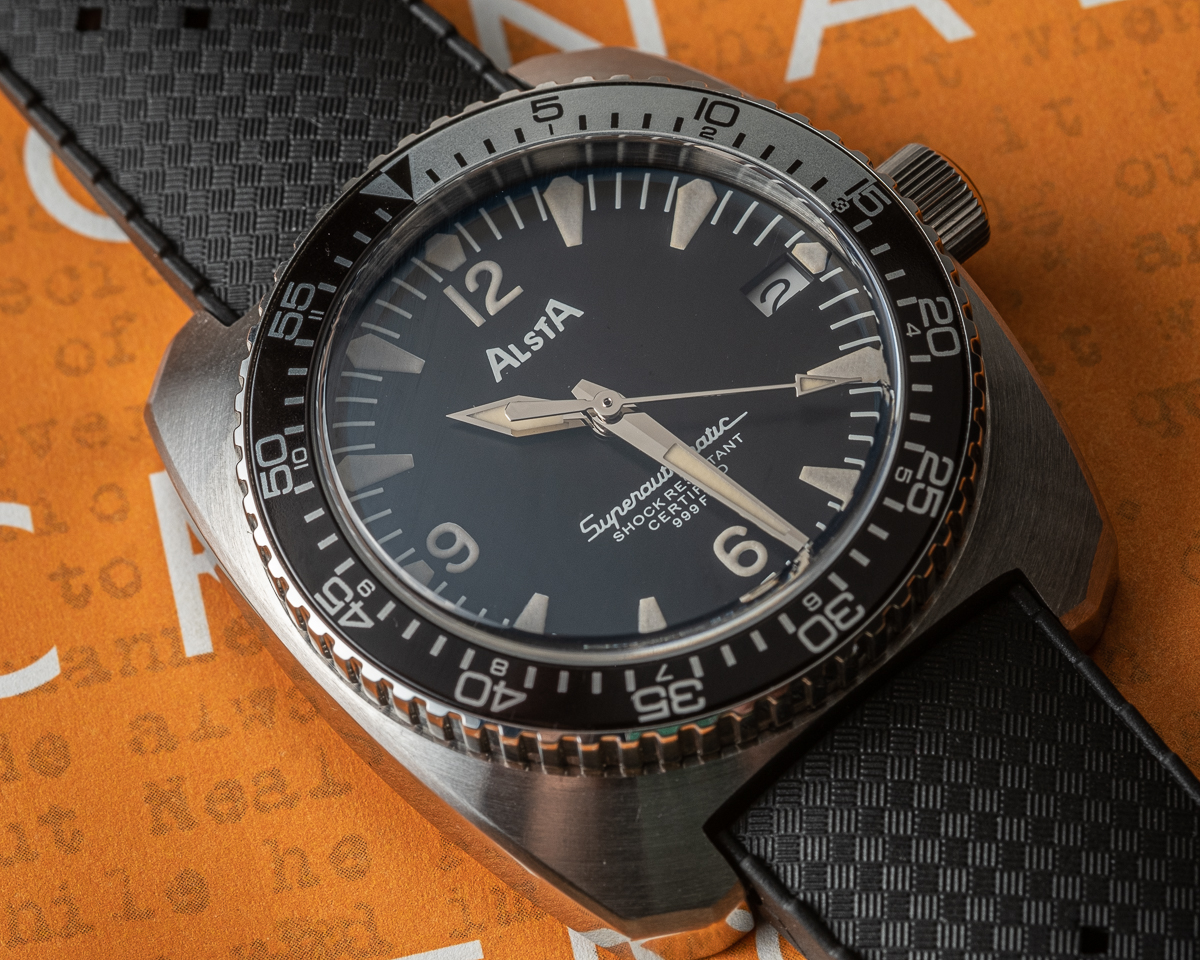 The movement in the Nautoscaph, according to Alsta, is the one piece of the watch not made in Switzerland or Germany. The brand opted for the Seiko NH35A movement and has used that in all models so far. While, of course, I would have loved to see an ETA 2824 or even a Selitta in here, I can understand why Alsta used the Seiko movement. This is an affordable timepiece. Cutting costs here while still using a reliable movement allowed them to focus their attention on other elements of the design. I believe this really paid off. 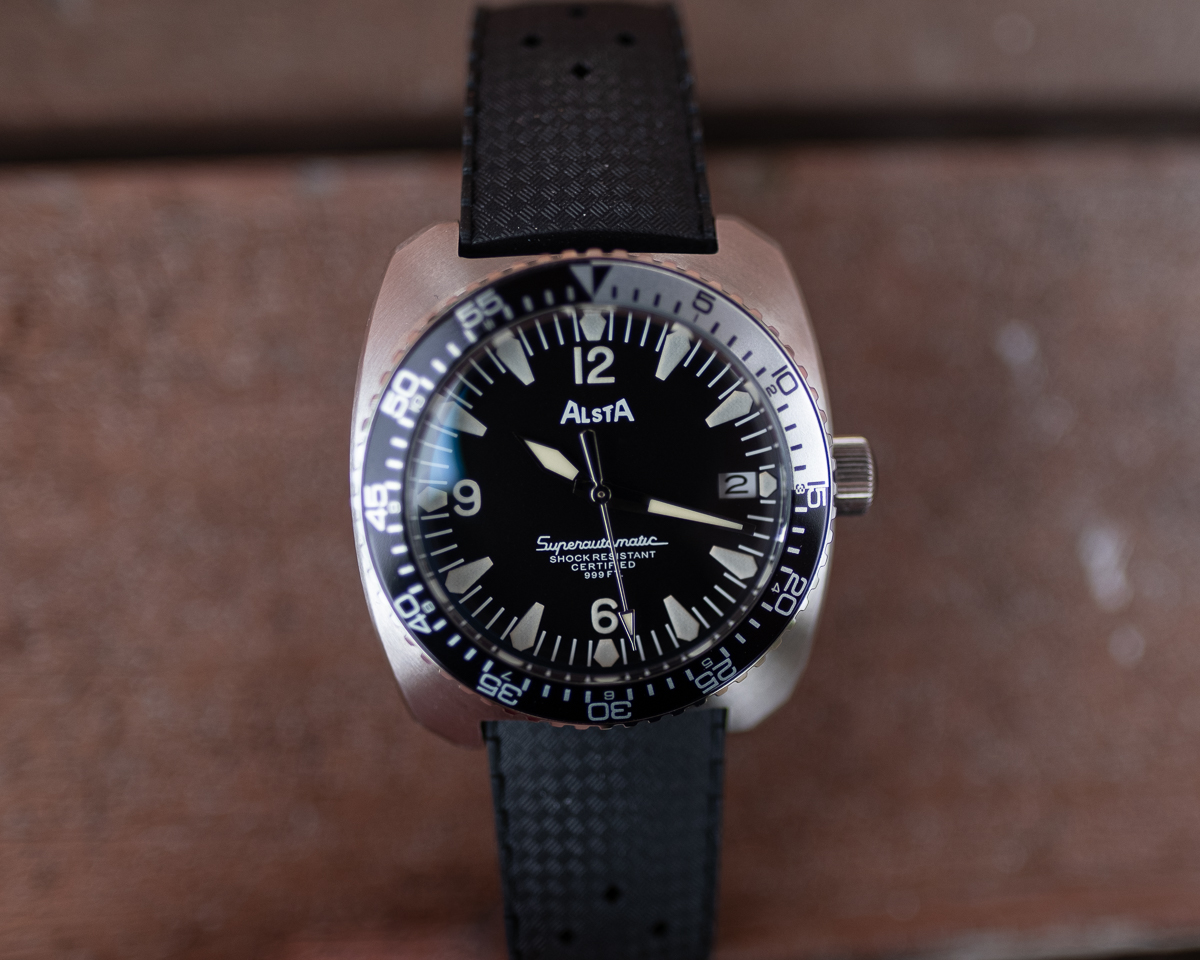 The dial of the Nautoscaph elicits thoughts of wreck dive in distant Caribbean coves. Rusty old tug boats used to get from island to island. There’s something profoundly toolish about this watch, and it all comes from the dial.

It’s a printed matte black dial with lumed indices at each hour. The numeral indices at 12, 6, and 9 are also lumed. The rest of the markers are printed in white and very balanced throughout the dial. It’s worth pointing out here that the inclusion of the date window means we don’t get a lumed 3 here — that might have been a nice option. I generally prefer dates on my watches, but the occlusion of a lumed numeral is a steep price to pay here, in my opinion. 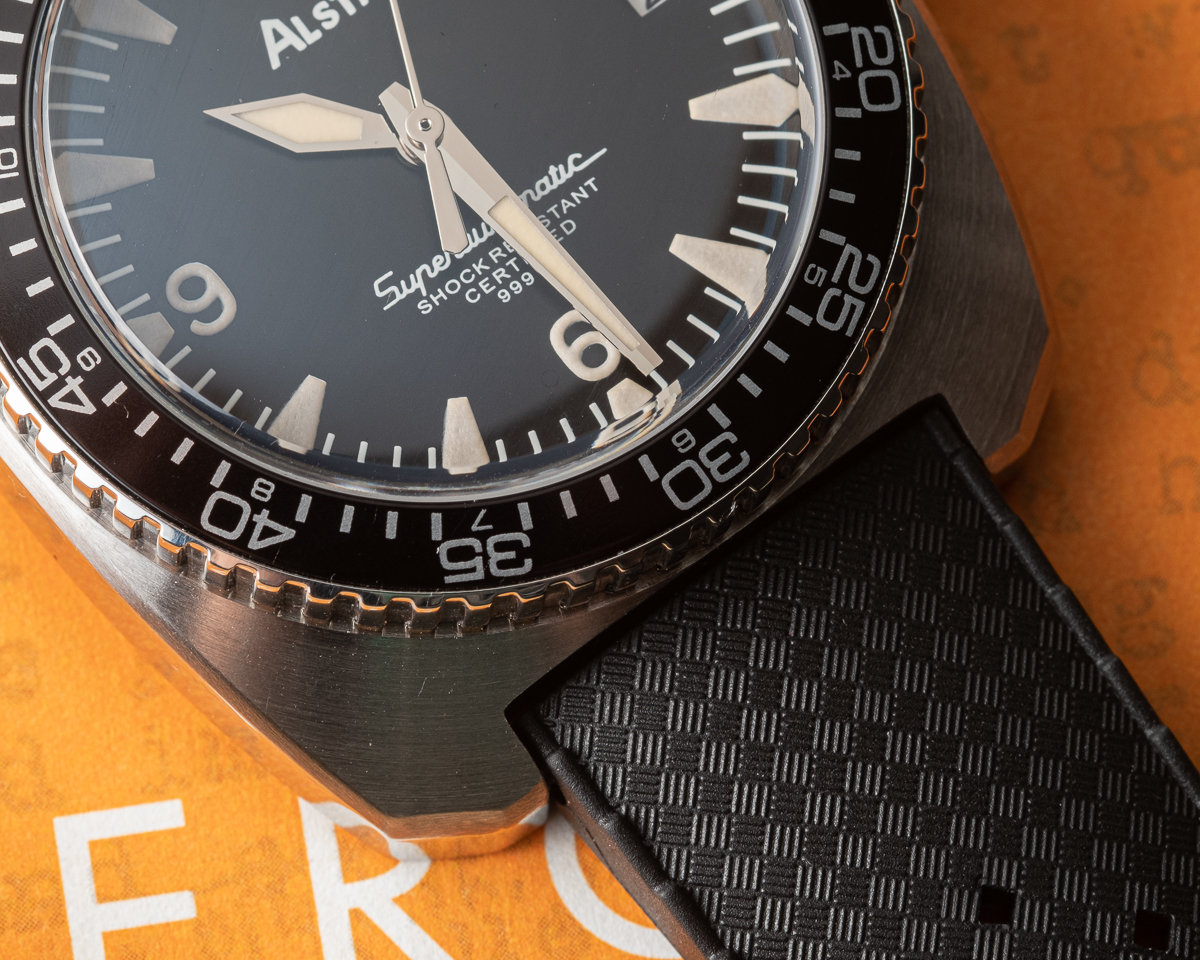 The hands are polished silver and faceted down the middle contrasting nicely against the matte dial. They have an ample lume plot running ¾’s their length. The second’s hand also has a lumed arrow at the end. All in all, it’s a really nicely designed handset that is easy to read.

Alsta used an aluminum printed bezel on the Nautoscaph. They left the portion between the zero-mark and the 15 bare to contrast with the rest of the bezel. One of the things I really is that, beneath the increments of 5 on the bezel, they’ve printed a small 1 – 12, allowing you the option to use it as a 12-hour bezel if you want. This offers a lot of functionality, in my eyes. The action on the bezel is a little stiff but easy enough to use while on the wrist. 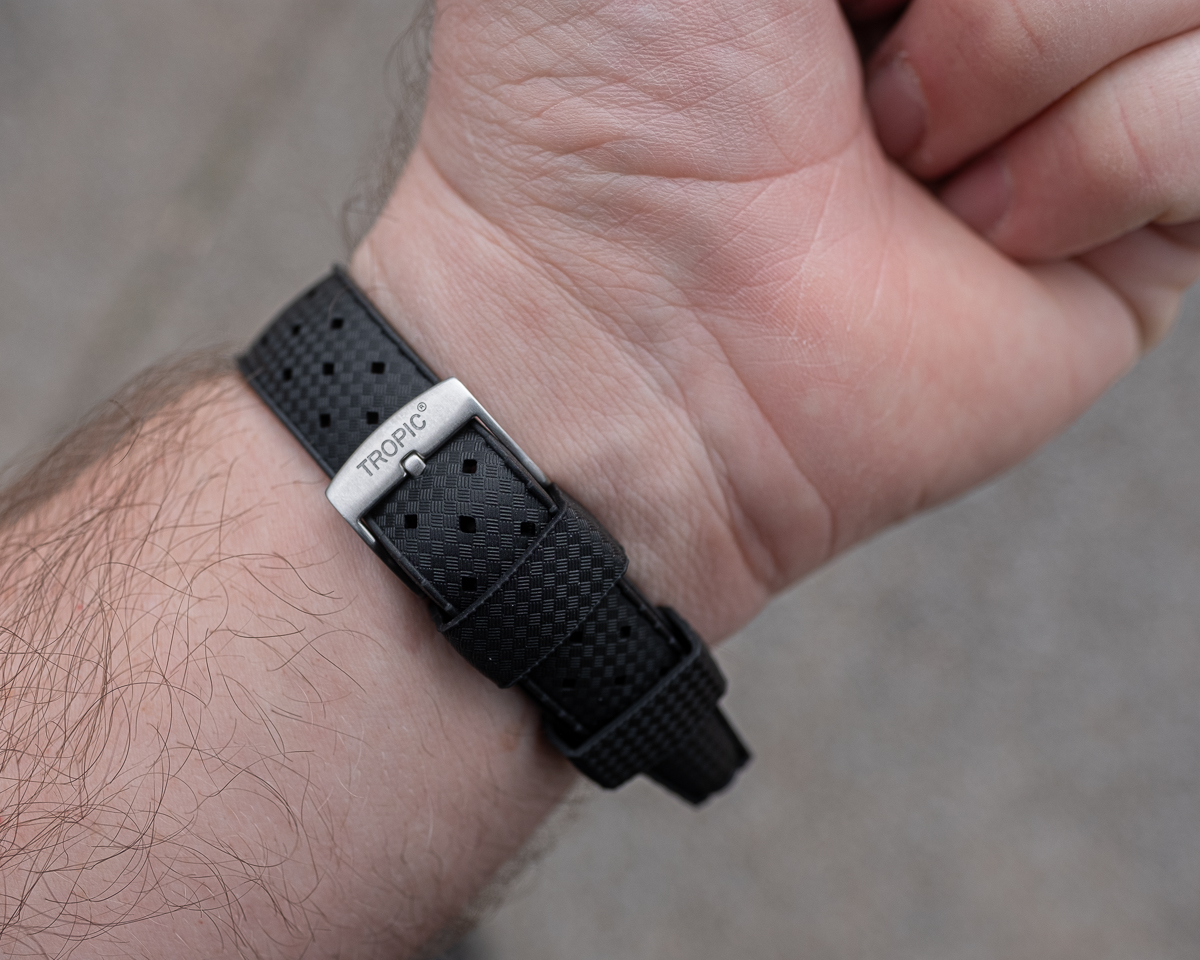 I was really excited to learn that Alsta had partnered with ISOFrane (Synchron) on their watches and use the newly reintroduced Tropic rubber straps. ISOFrane brought the “Tropic” name back to the strap world late in 2019, and I have been eager to handle one. I can tell you firsthand that these straps are the real deal. I’ve said, for a long time, that ISOFranes are some of the best tool-watch straps around. These Tropic straps are no different, plus they retain the vintage appeal that their name implies. 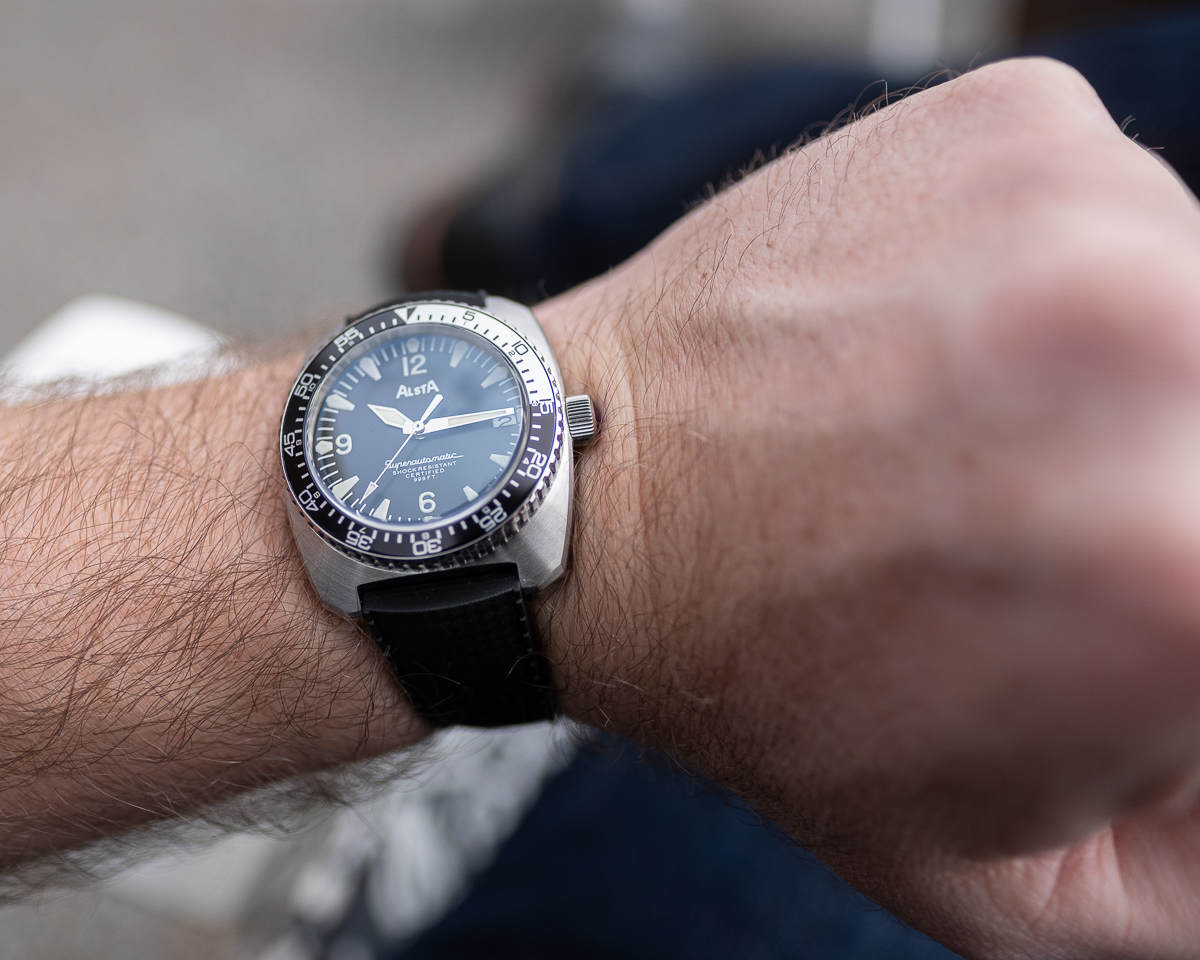 The proportions on the Nautoscaph are pretty magical. It rides nicely on my ~7” wrist. It’s not the thinnest watch out there, but this isn’t something that you’re going to want to slip under a shirt sleeve. This is a watch that sits against sun-tanned skin on a remote beach, or against a thin wetsuit on the zodiac headed to a dive site. I’m generally comfortable with watches between 38mm and 44mm, and this watch wears more substantial than the numbers suggest. It reminds me a little of how Seiko Turtles wear, although a bit smaller. 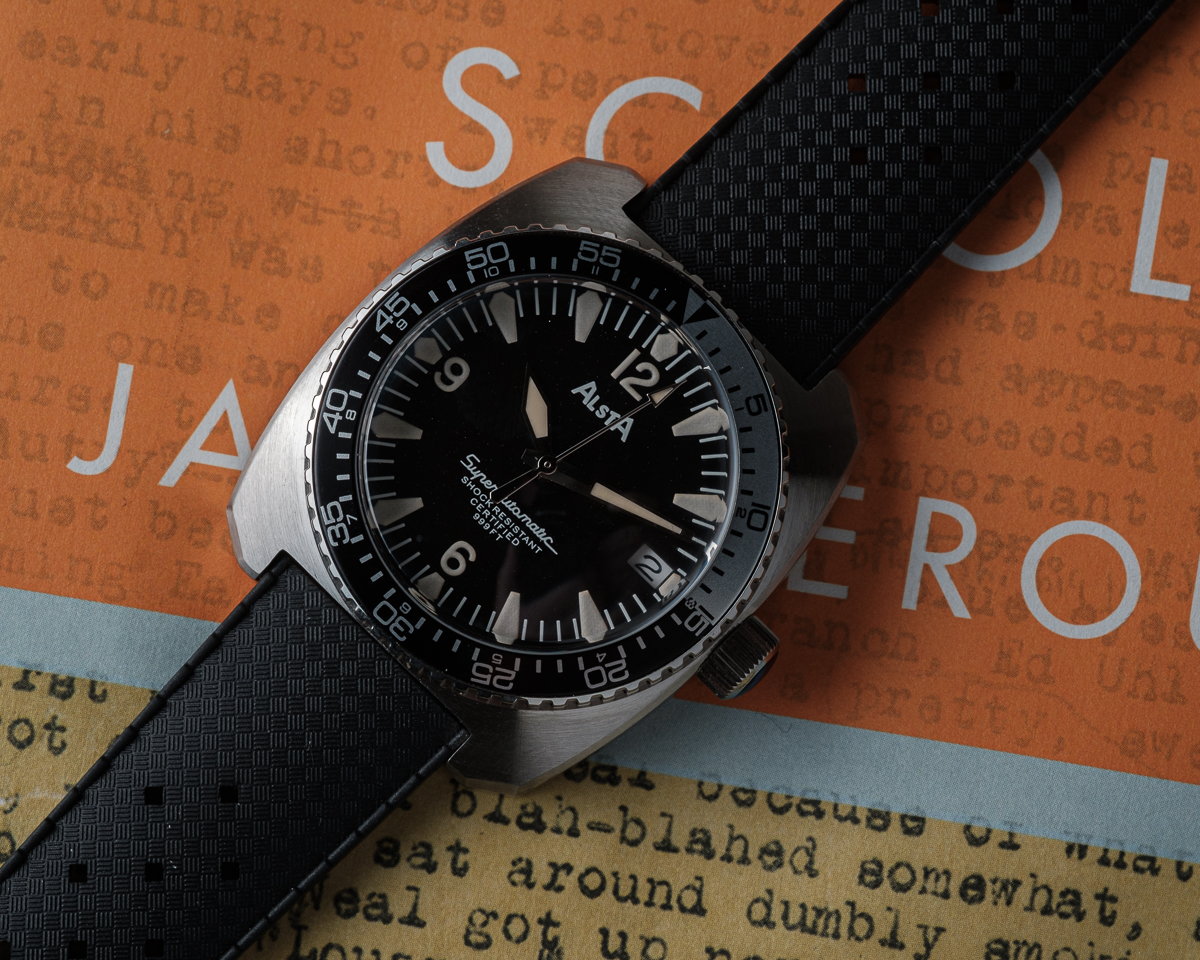 We can’t skip on offering some alternatives, maybe something about the Alsta doesn’t do it for you. The Baltic Aquascaphe would be a good alternative. Priced very similarly, it offers a different feel and aesthetic overall. You can read about them here.

You could also try a Halios Seaforth if you can find one. The Halios uses a swiss ETA movement and has a slightly larger case at 40mm’s. They come priced just under $700 but are perpetually sold out, I might suggest the secondary market here.

There’s also the venerable and much talked about Seiko SRP series. These are 44mm, but wear smaller. They also use the Seiko 4r36 movement, a tried and true budget-friendly workhorse. These come in a couple hundred cheaper but are one of my all-time favorite watches. 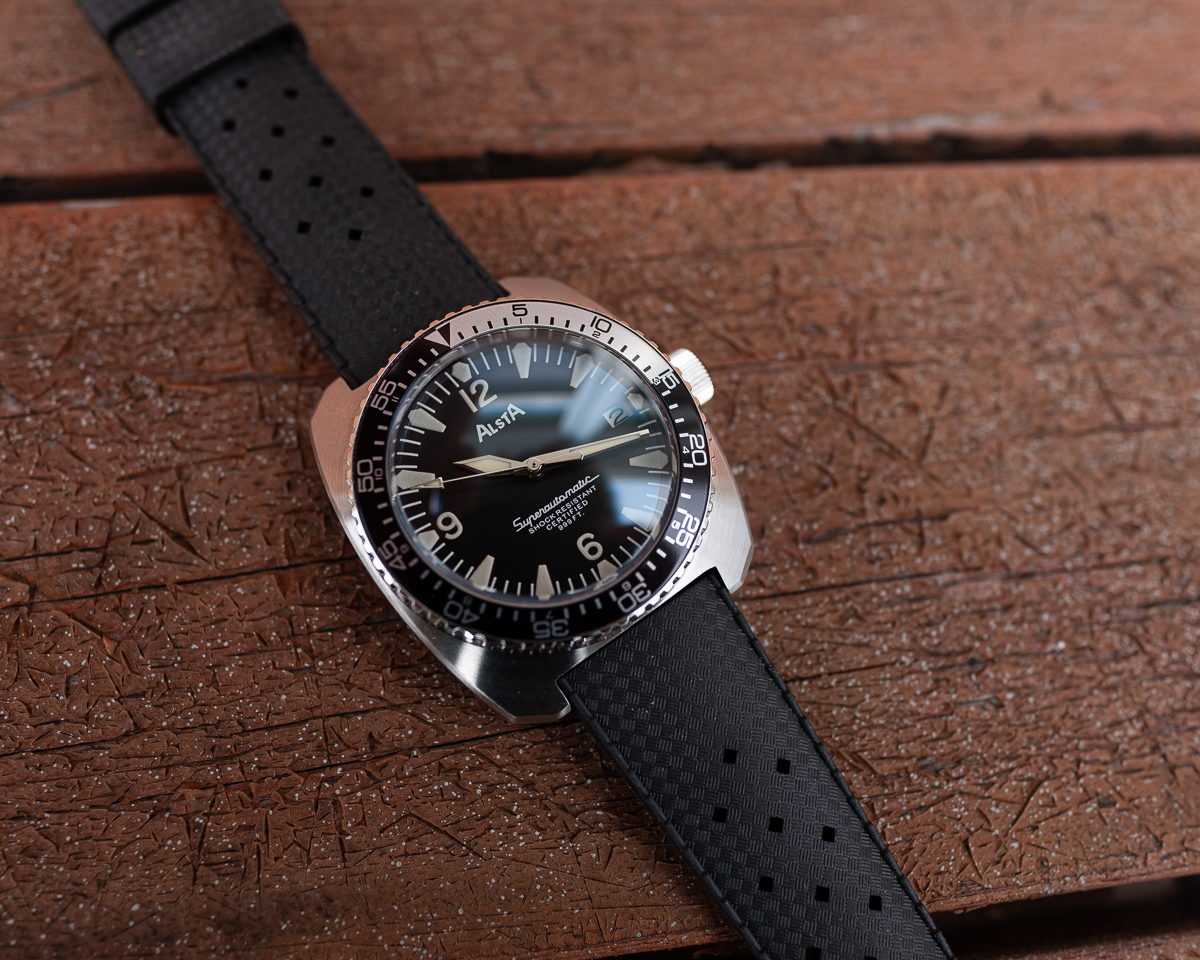 We started this review by talking about watches and movies. Honestly, if you’re a Jaws fan and you’ve been waiting for Alsta to come out with a modern interpretation of Hooper’s watch, this purchase should be a no-brainer. If, however, you didn’t know about the Jaws association and you just like vintage-inspired dive watches, this should also be a good option for your wrist. Alsta went to great lengths to maintain the character of the Nautoscaph Superautomatic and only made small modifications to suit a more modern style. Alsta is limiting the production of the Nautoscaph Superautomatic to a symbolic 1975 pieces, currently available from a select list of dealers for ₤795. For more information head on over to alstawatch.com.

Necessary Data
>Brand: Alsta
>Model: Nautoscaph Superautomatic
>Price: ₤795
>Size: 38mm
>Would reviewer personally wear it: Yes, enthusiastically.
>Friend we’d recommend it to first: Any dive watch or Jaws enthusiast.
>Best characteristic of watch: The lumed numerals on the dial.
>Worst characteristic of watch: The lack of the lumed 3, but even that isn’t a deal-breaker.