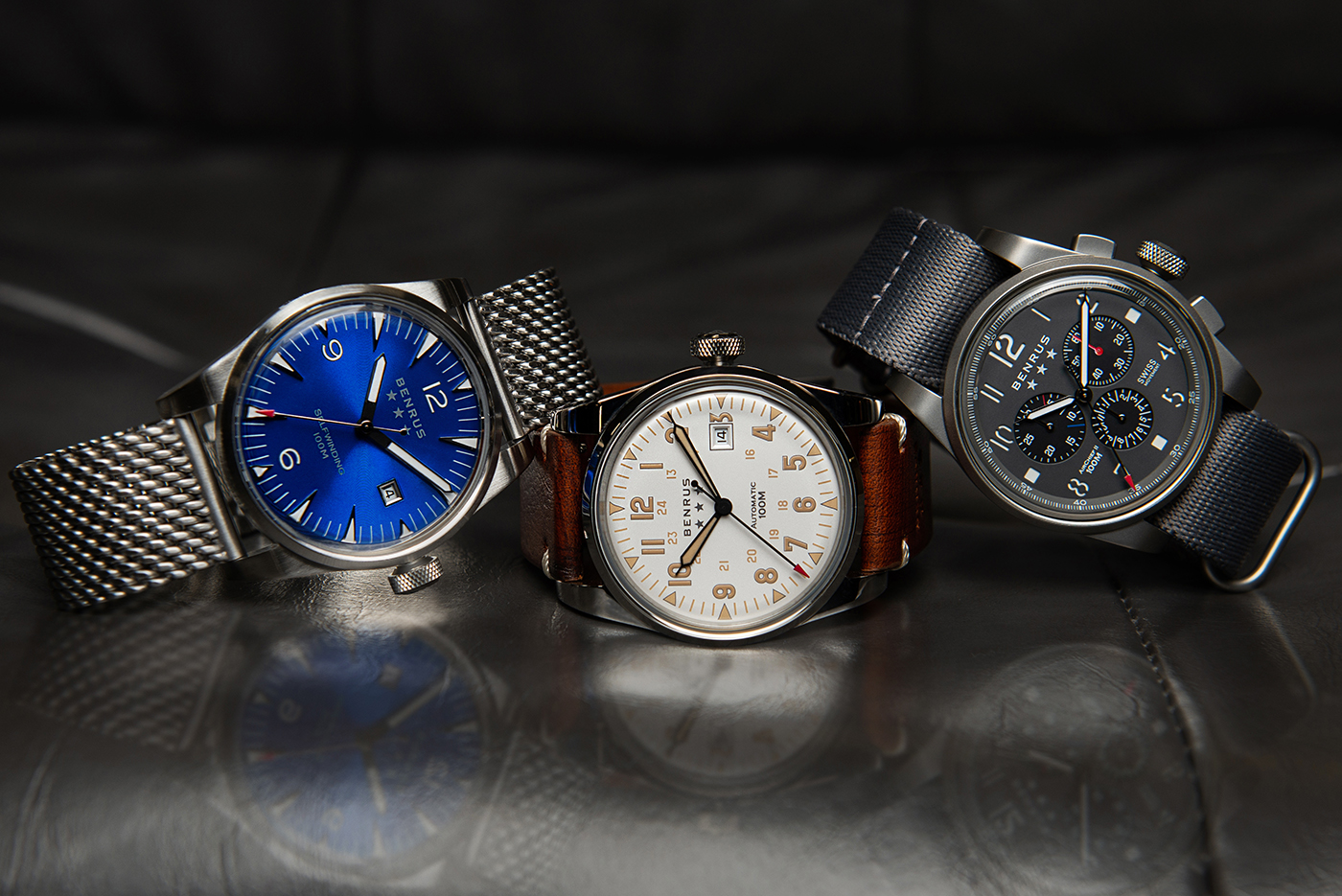 It may be difficult to imagine after many decades of Swiss and Japanese dominance of the watchmaking industry, but the United States was once a watchmaking power in its own right. Hamilton, Bulova, Waltham, and many others were all founded in America, but one of the unsung heroes of the golden age of American watchmaking was Benrus. Founded in New York City in 1921, the brand produced a wide variety of timepieces until its dissolution in the 1970s, including several different general-issue field watches for the U.S. military, the innovative Ultra Deep super-compressor diver, and the legendary Sky Chief chronograph, which became the watch of choice for commercial pilots at the dawn of the airline industry. Now, nearly a century after the brand’s inception (and several years after a minor lifestyle brand revival in 2015), a New York-based investment group has revitalized the Benrus name and brought it back to its original home at the Hippodrome on 6th Street in Manhattan. To coincide with the relaunch of the brand, Benrus has debuted an inaugural collection of three models inspired by past Benrus icons: the Field, the Classic, and the Air Chief chronograph. 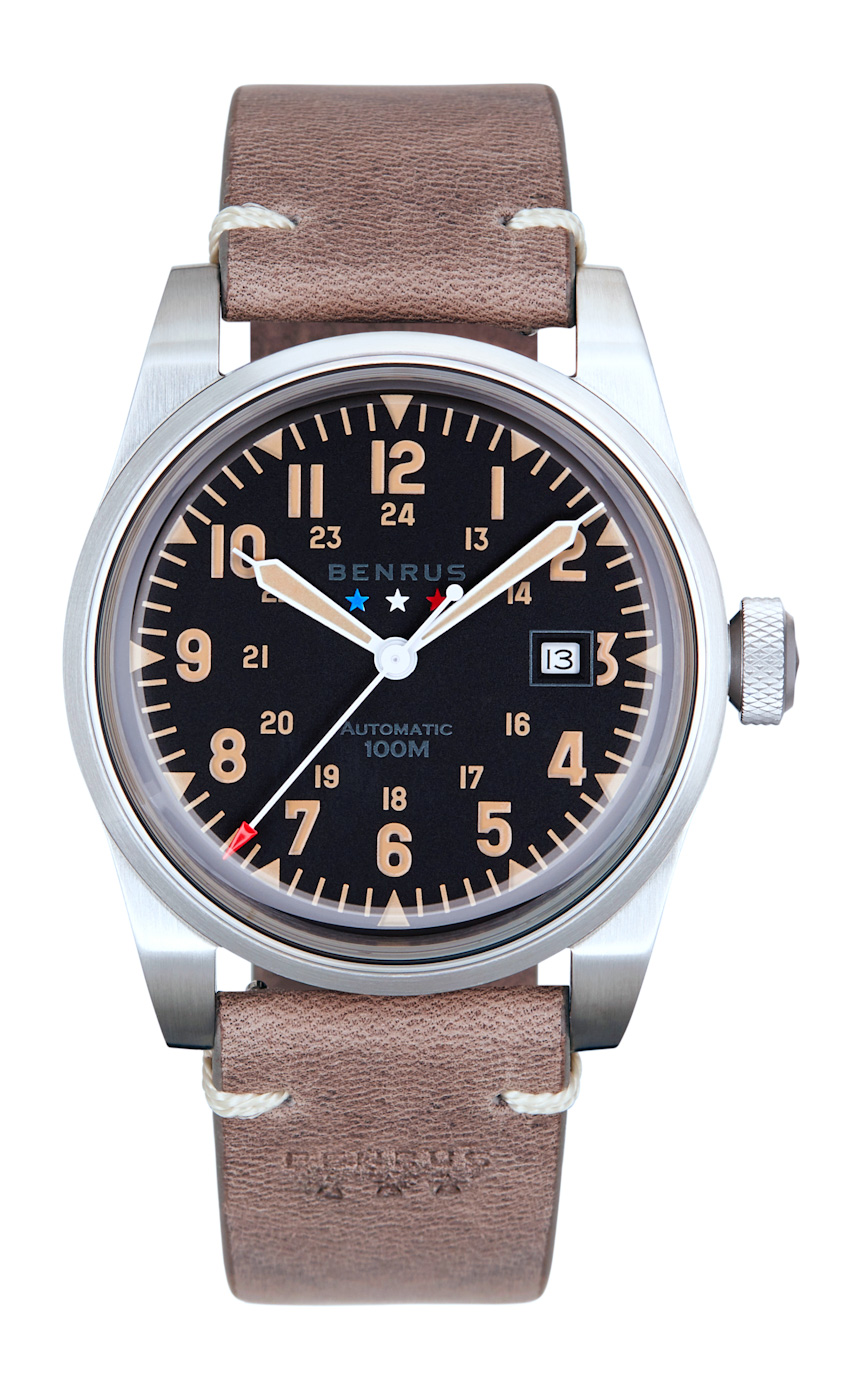 The first of these, the Field series, takes its inspiration from the ‘60s Benrus Series #3061 which was a civilian issue version of the GG-W-113 standard issue US Army field watch. One of these Series #3061 models was famously owned by movie star Steve McQueen, who wore the watch in the classic 1968 film “Bullitt.” The new Field takes this classically simple military design and updates it for a modern audience, upsizing the case to 41mm while adding 100 meters of water resistance, a mineral crystal display back, and amenities like a signed crown and optional black IP plating. For the most part, the dial of the Field cleaves very close to the vintage original, as well, with the mix of printed wedge indices and Arabic numerals paired with a set of tapering syringe hands and the distinctive red-tipped seconds. The colors of these models, however, take the design in a new direction with exaggerated “fauxtina” khaki lume, a silver dial option, and a pop of contrast from the red, white, and blue stars beneath the Benrus logo. Inside the Benrus Field is the tried-and-true Miyota 9015 automatic movement, dressed up here with a skeletonized signed rotor and Côtes de Genève on the movement plates alongside a respectable 42-hour power reserve. Most of these models take a conservative approach to strap pairings, with tan or tobacco brown embossed leather with white contrast stitching. For the IP plated black model, however, the brand opts for a wild camo-pattern NATO strap on matching black hardware. Pricing for the new Benrus Field stands at $1,095. 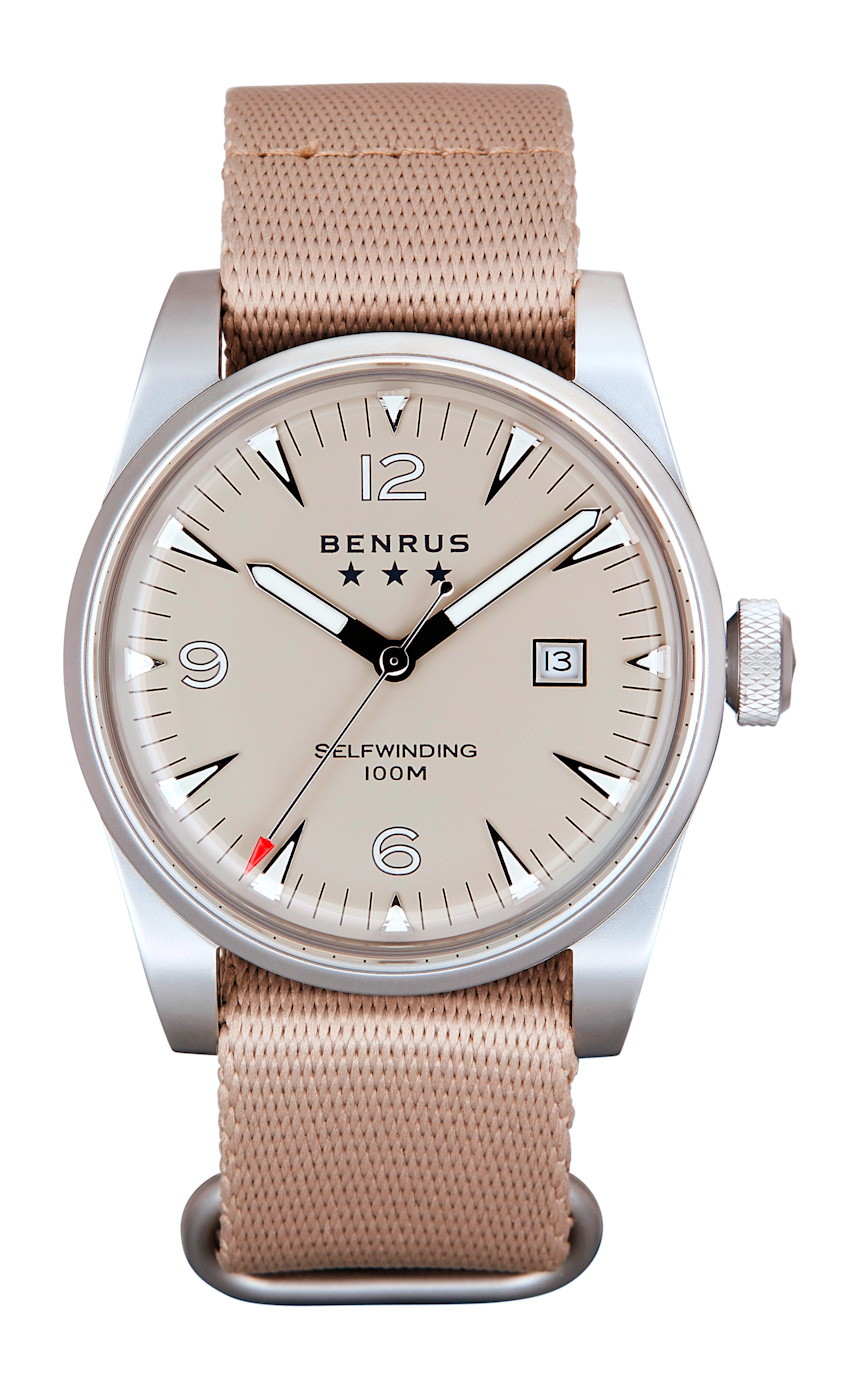 The second model of the trio, the Classic, shares many of the same design principles with the Classic but reinterprets them in a dressier package. The same 41mm stainless steel case is used here, but brushed rather than fully polished for a more finished look. Likewise, the dial shares a passing resemblance to its stablemate, but the triangular indices are now applied and lengthened, while numerals are reduced to 12, 6, and 9 o’clock. The complicated syringes of the Field are replaced with elemental straight swords with a generous fill of Super-LumiNova. Color is a bit more playful here as well, ranging from black to a sandy tan and a vibrant royal blue. Like the Field, the Classic is powered by a decorated Miyota 9015 movement. Strap options include embossed brown leather, a khaki NATO strap, and a signed Milanese mesh bracelet. MSRP for the Classic line begins at $1,195. 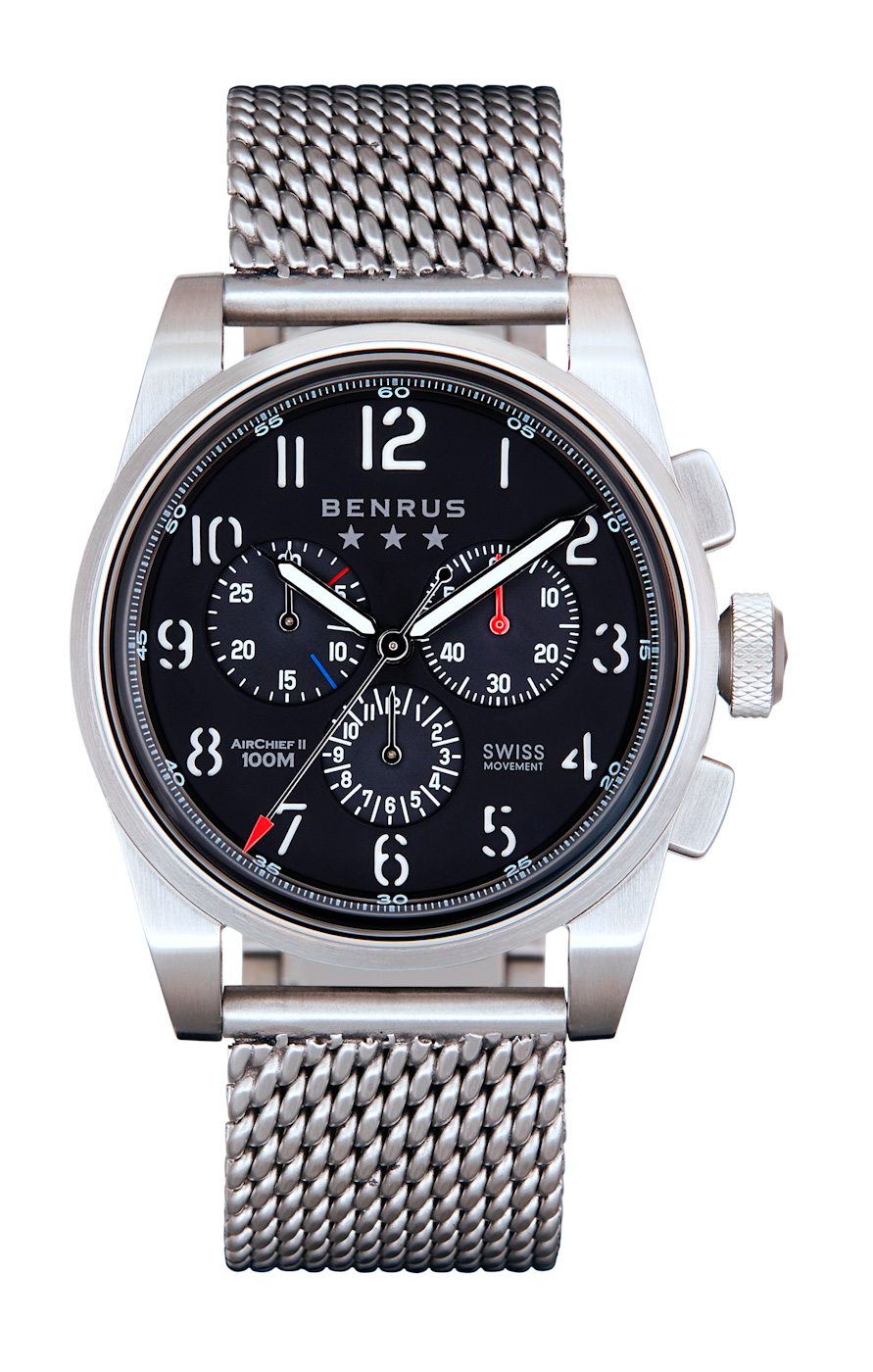 The Air Chief is the last of the new models, offering a very loose reinterpretation of the iconic Sky Chief chronograph. Like the other two models, the Air Chief shares the same basic 41mm stainless steel case, with the obvious addition of chronograph pushers along with an engraved solid caseback. At the outset, this style of case is a far cry from the light and delicate 37mm case of the original Sky Chief except for the rectangular pushers, and the differences grow deeper when looking at the dial. The Benrus Sky Chief had a distinctive and balanced dial dominated primarily by its rounded Arabic numerals, syringe hands, and balanced subdials. The Air Chief diverges in everything except the most basic forms. There are printed Arabic numerals here, but rendered in a modern and militaristic stencil font, while the syringe tips of the hour hands are significantly shorter and less distinct. Most notably at a glance, however, are the oversized chronograph subdials. These are less of an aesthetic choice than a concession to the movement, but it drastically changes how the chronograph presents to viewers. That said, there is a fair amount of variety in dials among variants, including black, gray, and a unique reverse panda with a different set of flieger-inspired indices. Perhaps the greatest departure from the Sky Chief comes with the Ronda quartz split seconds chronograph movement. While almost necessary for a chronograph at this price point, it’s hard not to wish for a mechanical option. Benrus offers the Air Chief on an array of different straps, including a gray NATO, black or gray embossed leather, and a Milanese mesh bracelet. Pricing for the Air Chief begins at $895. 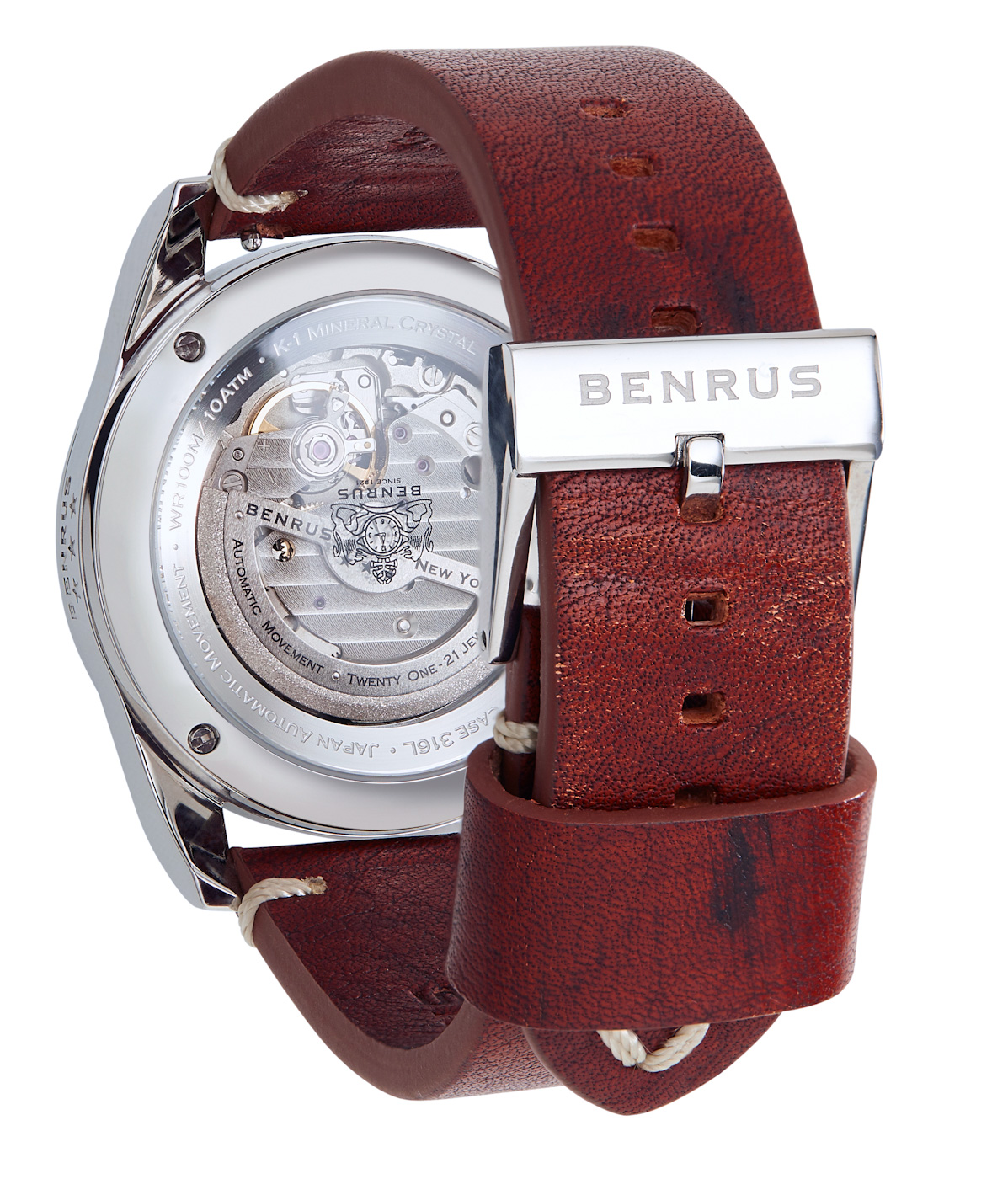 These three watches are only an opening salvo for an extensive campaign by Benrus in 2020, with plans for later in the year including faithful reissues of several iconic models to accompany these looser reinterpretations. All three model lines are available now online and through authorized dealers. For more information, please visit the brand’s website.