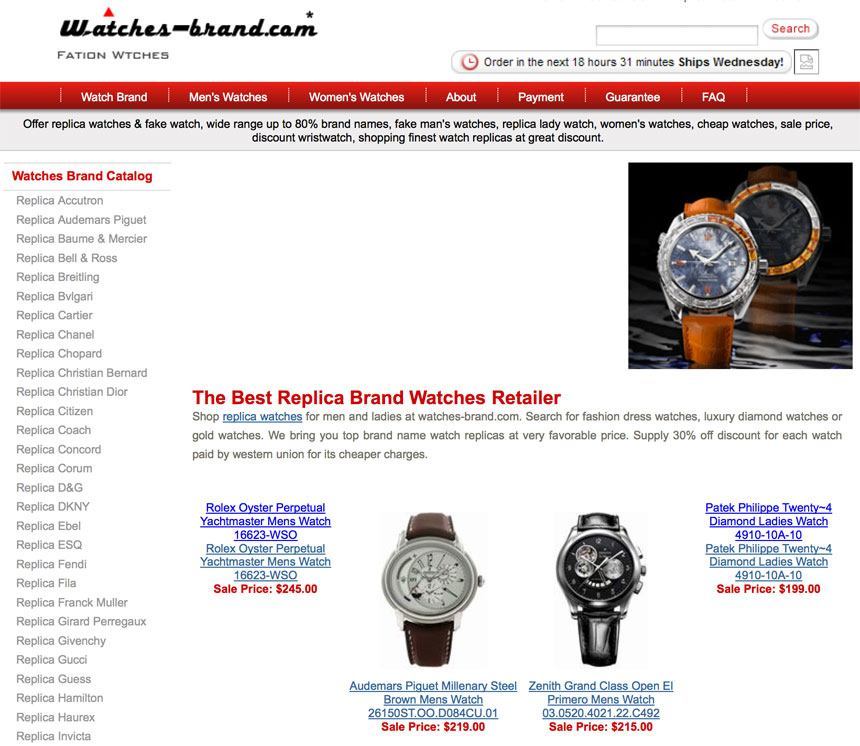 Amusing Look At Fake Watch Store Watches-brand.com; Worth The Look For The Laughs

When did Citizen watches start to become the target of fakes? Its true. I first learned that Watches-brand.com was selling fake Citizen Campanola watches, such as the Grand Complication. This sort of makes sense as the watches are all above $2000 and feature quartz movements. But then I learned that they didn’t stop there. They are making fake watches based on authentic Citizen watches which themselves are only a few hundred dollars brand new. I get the market for the fake Rolex or Patek Philippe, but what is the message of faking a Citizen? Something like “I’d really like people to think I am middle class third world country, because I identify that with the highest level of success I’ll ever possibly reach, but my status is merely enough to convince people I know how to tell the time if I am wearing a watch.” Yes, this statement is odd and contrived, but so is faking a Citizen. Not that there is anything wrong with Citizen, I proudly own a few myself, but I’d never see a reason to buy a fake one.

Watches-brand.com doesn’t stop with Citizen as the only “whaaa?!!” watch brand fake they sell. They also offer fakes from such “prestigious” brands as Invicta, Swatch, Timberland, Guess, and DKNY. These aren’t companies that even all specialize in watches or are even high end brands. The fakes all go for more than $200 a piece, I don’t even think a new Guess or DKNY watch goes for that much? This is all very amusing and sad at the same time.

Watches-brand.com is based out of China, and as is typical of the fare the English (Engrish) is pretty hilarious. Aside from the odd grammar and peculiar choice of words, I get a big kick out of the tag line under the website name as seen above. “Fation Wtches!” I’ll let you get the point yourself. Oh, and according to them, you cannot have enough “A” letters to indicate quality. In their case, all watches get a “AAAAA” rating. Sweet!

Although I do advocate getting good prices for watches, I don’t advocate buying fake watches. The nicest fake watches I’ve seen were not really that nice. Those were actually being hawked by the Japanese Yakuza (organized crime) on the streets of Tokyo in some places. The movements were all Osaka made automatics, and probably decent enough not to break after a few days. Further, most of the complications worked on the watches. The watches copied were lots of expensive brands of typical fare. I was a bit surprised to see some watches faked however. Anything that is supposed to be gold or a non steel metal will wear very fast. Steel watches that are faked (such as a Rolex Submariner) aren’t made with the same quality steel or fit and finish. You get the same idea, but most anyone will know it is a fake with any inspection. The big kicker? Fakes there cost around $400, or more. So you are talking serious money for a fake, that doesn’t even look all that great. Sometimes it is fun to have a fake of something really outrageous. I don’t own any myself though. I prefer to get the best of what I can for the money that I have. In the end, I’ll know the deficiencies in quality in a fake watch, which alone would prevent me from buying them.

As is the location of Watches-brand in China, a ton of fake watches are made there. High production capacity along with no regard for intellectual property rights makes it the perfect place to make fake watches, only fake watches are by no means a perfect alternative to decently make watch. It is an ongoing conversation, but I will leave it at that.